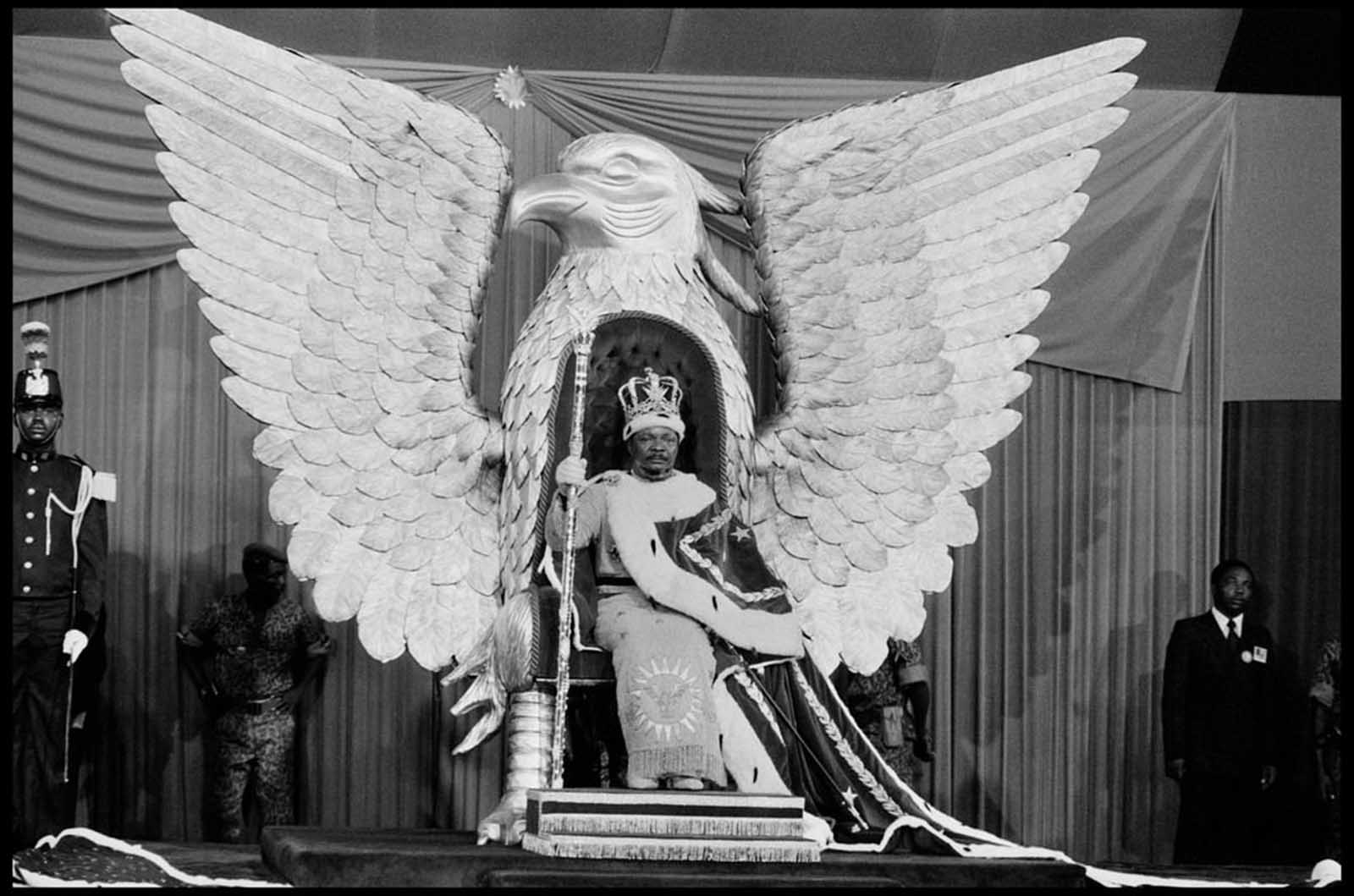 Jean-Bédel Bokassa was a military officer and the head of state of the Central African Republic from his coup d’état on 1 January 1966. But being President wasn’t enough so in 1976 he proclaimed himself emperor of the nation, which was renamed the Central African Empire.

Bokassa attempted to justify his actions by claiming that creating a monarchy would help Central Africa “stand out” from the rest of the continent, and earn the world’s respect.

The enthronement was scheduled on December 4, 1977, the 173rd anniversary of Napoleon’s coronation, which is why Bokassa chose this date. Meanwhile, the empire was mustering every resource to ensure the success of the coronation. Special committees were established to supervise various aspects of the work.

The committee in charge of accommodation had the task of finding suitable rooms for an anticipated 2,500 foreign guests. To this end it began to commandeer apartments, houses, and hotels for the duration of the festivities, renovating them in a fitting manner. 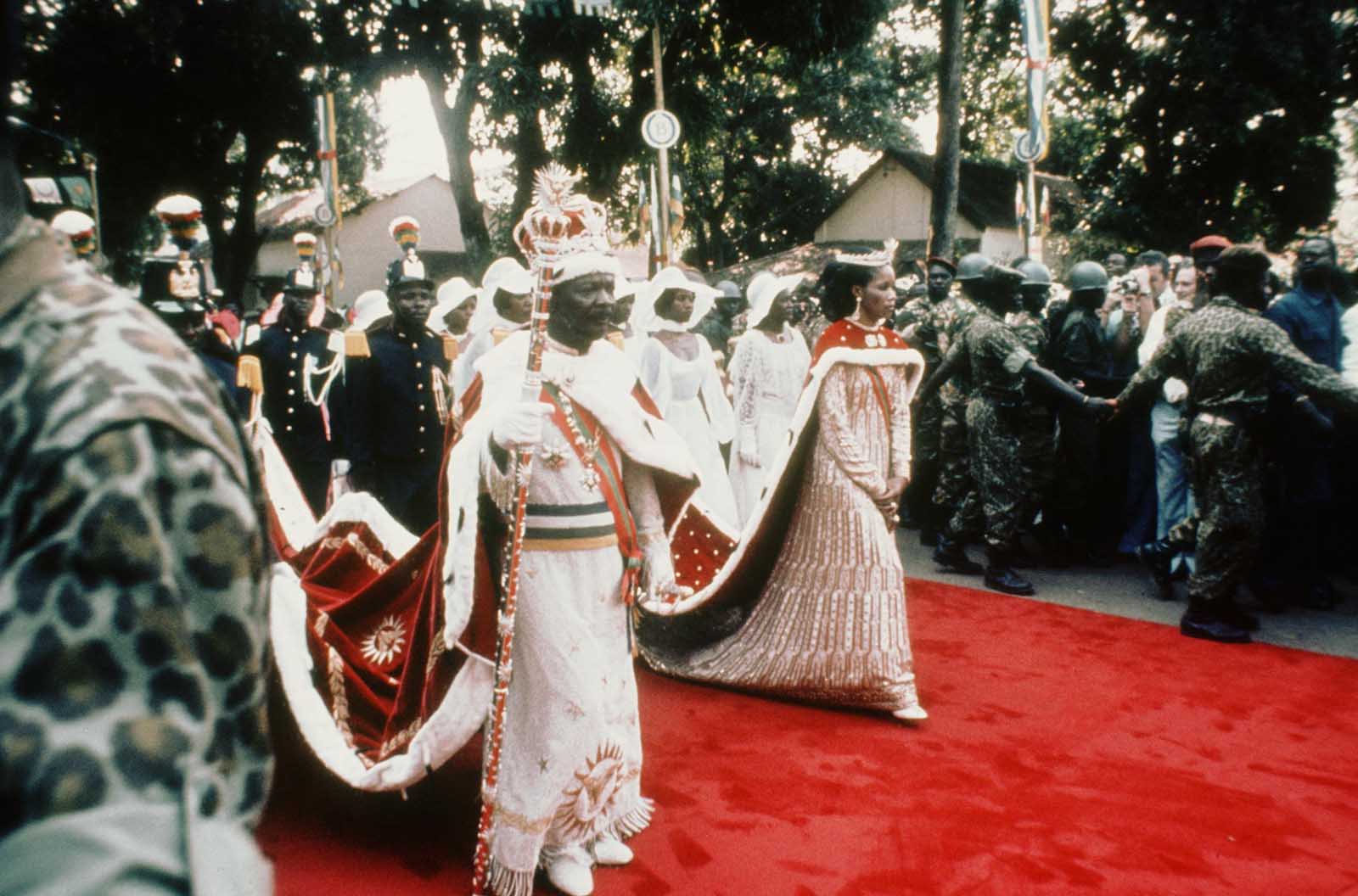 Another committee was responsible for making the capital look its best, especially those areas that would be involved in the coronation ceremonies. Streets were scrubbed, building painted, and beggars driven out of sight.

The empire’s textile industry was kept busy producing hundreds of new suits for local guests. Strict rules of protocol dictated the colors: white for schoolchildren, navy blue for middle-management people in the private and public sectors, and black for cabinet ministers and senior officials.

French craftsmen produced a regal splendor for the first coronation of an emperor on the African continent since the late Haile Selassie of Ethiopia was crowned in 1930. Bokassa’s coronation ceremony had to faithfully replicate that of his favorite figure, Napoleon Bonaparte, with staggering attention to detail.

Paris sculptor Olivier Brice was invited to do the throne and the carriage as well. A team of thirty french artisans was hired to fashion the two-tonne gold-plated bronze throne in Normandy worth $2.5 million. Brice bought an antique coach in Nice and refurbished it in the Napoleonic style.

Eight white horses were found in Belgium to pull it, and a few dozen Normandy greys were acquired to carry the escort of “hussars” that was to accompany the carriage. In order to ensure that all went well on the day, a troop of Central African soldiers spent the summer of 1977 in Normandy to learn how to ride horseback European style and to balance on the back step behind the Emperor’s carriage.

The 200-year-old firm of Guiselin, which had embroidered Napoleon’s uniforms, was called on to create Bokassa’s coronation attire in association with Pierre Cardin. A total of thirteen outfits was ordered for a total cost of $145.000.

Lanvin made the empress’s coronation gown for a $72.400 bill. The imperial crowns were the work of the House of Arthus Bertrand, the Saint-Germain-des-Prés jeweler, founded under Napoleon’s reign. Along with the imperial scepter, sword, and other bits and pieces, the total jewelry bill reached around $5 million.

Finally, in order to take the guests around Bangui in style and comfort, 60 brand-new Mercedes-Benz were ordered from Germany. The cars were shipped to Cameroon, from where they were air-freighted to the land-locked empire. The air freight charges alone amounted to $5 000 per car. 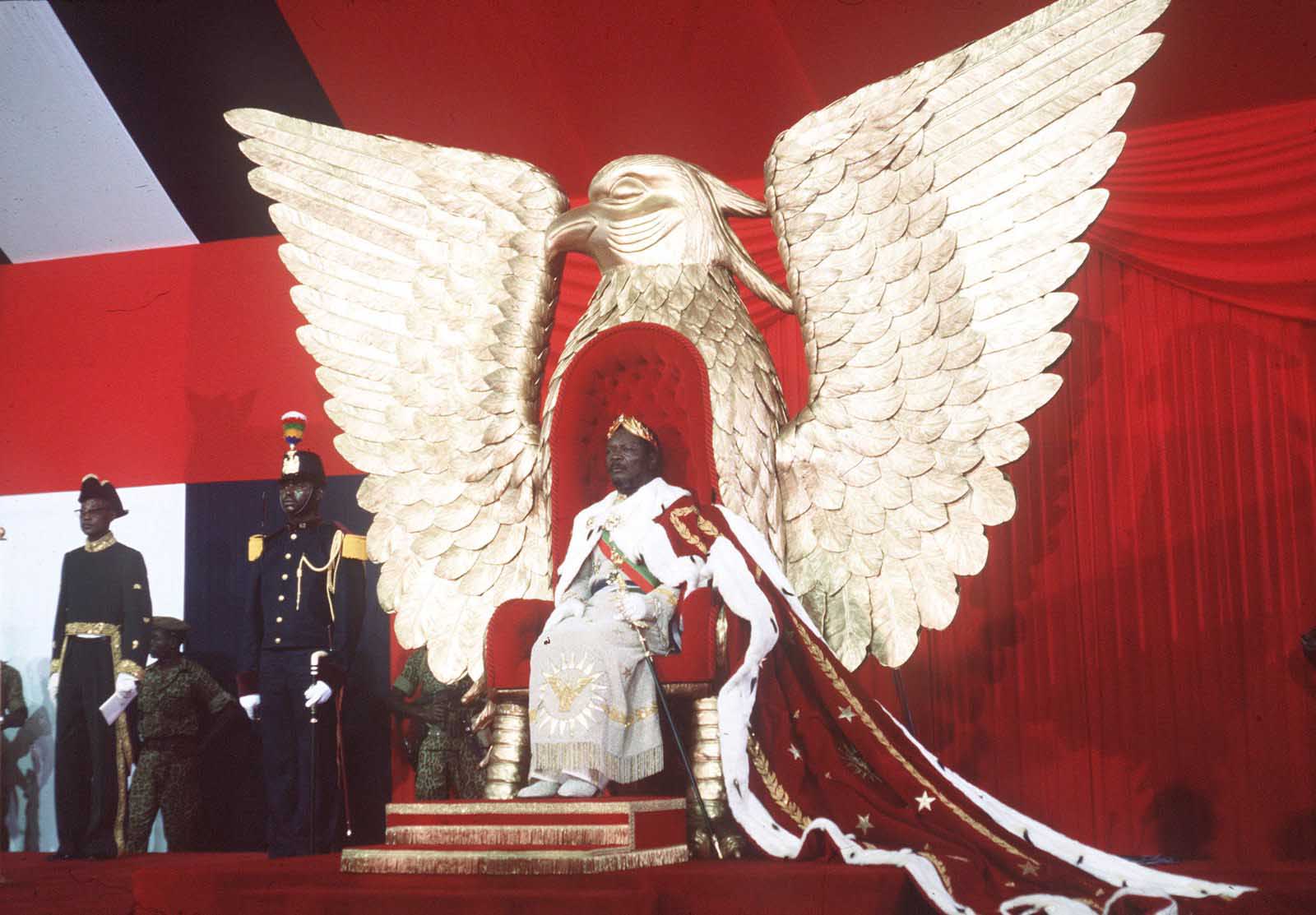 Enthronement of Emperor Bokassa I of Central African Empire.

As preparations progressed, Bokassa’s major concern was to ensure a respectable turnout of international dignitaries. His fellow emperors, Japan’s Hirohito and Iran’s Shah Reza Pahlavi, were the first to be invited, but they declined.

The rest of the world’s reigning monarchs were also on the official guest list, and one by one they too refused. The only aristocrat to accept was Prince Emmanuel of Liechtenstein, a relative of the little country’s sovereign.

No president came. President Ould Daddah of Mauritania sent his wife and all African leaders, with the exception of Sir S. Raugoolam, Prime Minister of Mauritius, politely declined to appear at an occasion that most considered an embarrassment to Africa’s emerging nations.

They either were represented by their ambassadors or boycotted the affair. Even old friends like Mobutu, Bongo, and Idi Amin found excuses to stay away. Bokassa commented on this rather disappointing turn-out saying ‘They were jealous of me because I had an empire and they didn’t’.

The French president, Valery Giscard d’Estaing, to the surprise of many, decided not to attend. Paris was represented by Robert Galley, minister of cooperation, and by René Journiac, presidential adviser on African affairs. François Giscard d’Estaing, who had arranged most of the payments, was also there. In all 2,500 international dignitaries were invited and 600 accepted.

Those guests will be lodged for several days in the best hotels or in specially constructed housing and fed and watered at considerable expense to the country. They included 100 journalists. Media coverage of the coronation was thus assured. 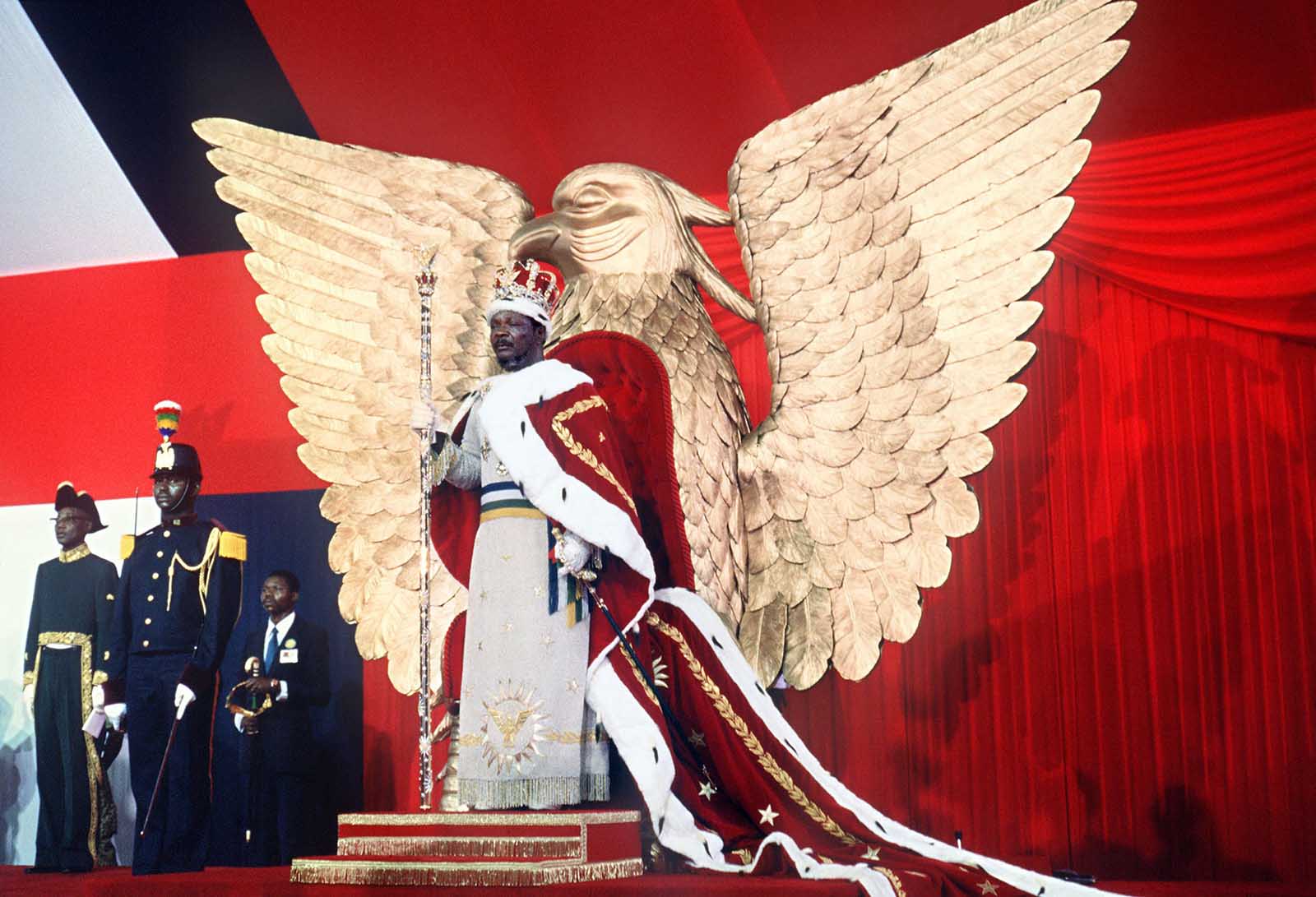 The imperial crowns were the work of the House of Arthus Bertrand, the Saint-Germain-des-Prés jeweler, founded under Napoleon’s reign.

On the scheduled day, the procession began with eight of Bokassa’s twenty-nine official children parading down the royal carpet to their seats. They were followed by Jean Bedel Bokassa II, the heir to the throne, dressed in a white admiral’s uniform with gold braid. Catherine followed, the favorite of Bokassa’s nine wives and new empress. When the Marine band blared, “The Sacred March of His Majesty, Emperor Bokassa I”, His Highness strode forth on the 80 meters red carpet.

In the tropical heat, Bokassa wore floor-length velvet dawn decorated with 785 000 tiny pearls and 1 220 000 crystals beads. Matching pearl-covered slippers went with it. White gloves covered his hands. On his brow he wore a gold crown of laurel wreaths, precisely like Napoleon’s, making of him an Imperator Caesar.

The emperor received successively at the hands of his officers of the guard the regalia. The first one was his 9-meters mantle of crimson velvet, embroidered with gold imperial emblems (bees, suns, shining eagles), trimmed with ermine, and later carried by an honor guard.
Then the imperial crown was brought on a red cushion.

It was largely inspired by queen Elizabeth II of England’s crown, but with Napoleonic items added: a heavy gold frame resting on an ermine headband with a crimson velvet canopy on top. The eagle was perched, wings outstretched, on a blue orb representing the earth, on which a map of Africa was etched in gold. The crown was encrusted with rubies, emeralds, and 8,000 local diamonds, the largest of which, displayed prominently in front, weighed 80 carats.

Bokassa I removed his laurel wreath, lifted his own bejeweled crown from the cushion, and placed it firmly upon his own head, just as Napoleon had done. Then he received the last insignia: a jewel-encrusted, gold-plated sword (offered by President Valery Giscard d’Estaing) and a huge diamond scepter. At 10:43 A.M., December 4, 1977, the twentieth century saw a new emperor.

The coronation was a folie de grandeur for which he will always be remembered. When everything was added up the total cost of the two-day ceremony came to around $25 million. Some even said $30 million. This was an enormous sum considering the state of the national economy.

It approximated one-quarter of the empire’s annual budget. France paid for most of it, as it had promised to do in return for Centrafrique’s break with Libya and for its rich uranium deposits. The coronation cost the equivalent of all French development aid for that year.

Bokassa had wanted to be noticed, and he certainly had been. The world press diligently reported his moment of glory, though without the accolades or acclaim that he expected. His crowned image was flashed around the globe, usually accompanied by mocking commentary.