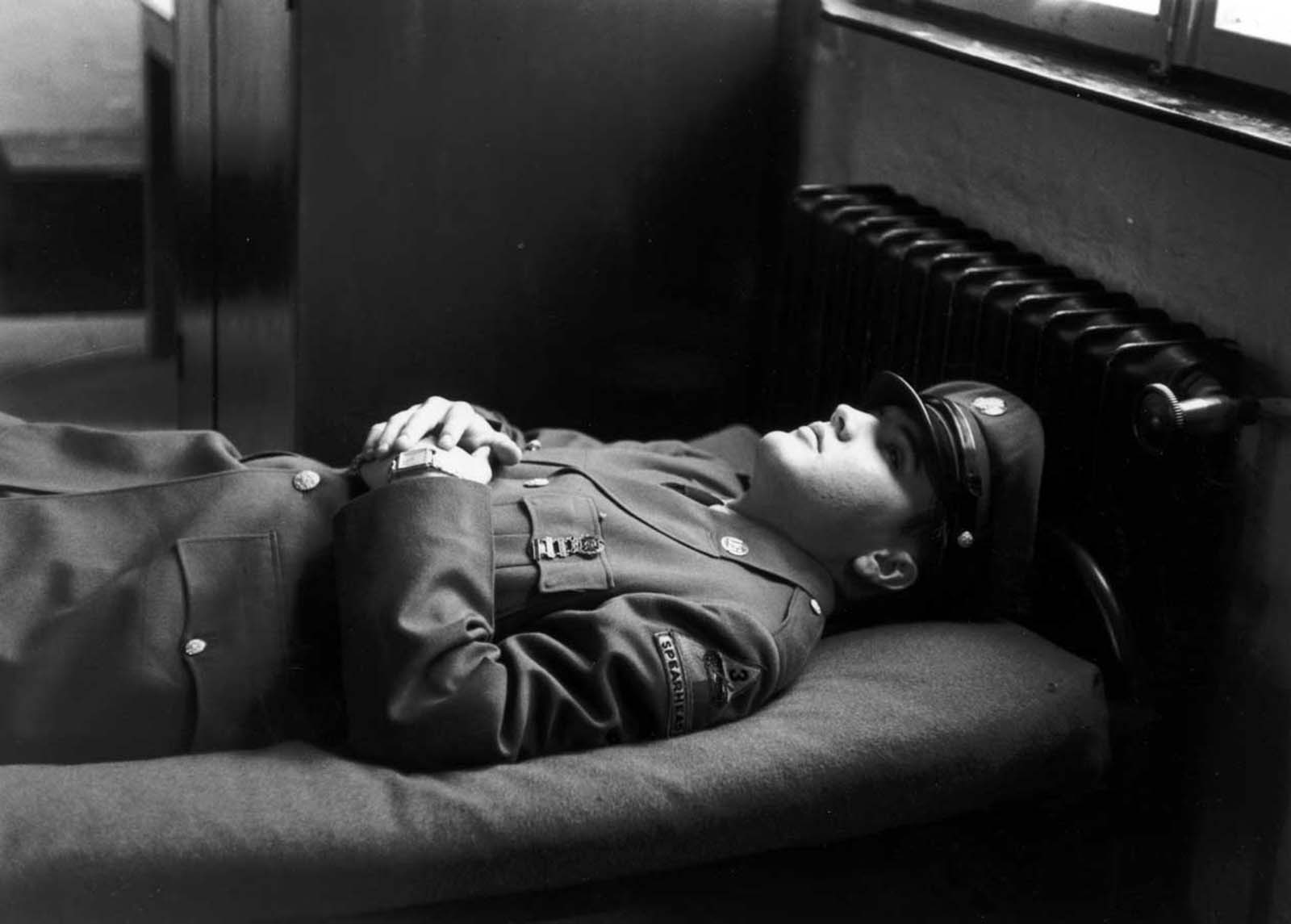 Elvis rests on an army cot.

Elvis Presley, the “undisputed King of Rock and Roll”, began his career in 1954 and became a national sensation in 1956 with the release of “Heartbreak Hotel.” He went on to captivate audiences with his unique musical style, provocative hip gyrations, and electric personality.

Presley was drafted into the United States Army in December 1957; on March 24, 1958, he entered the Army at the Memphis draft board. Presley was filmed as he was given an Army haircut and fitted for his uniform.

When Elvis joined the U.S. Army, the Navy and the Air Force — and the Pentagon — were left disappointed. All the armed services had put considerable effort into being the choice of the King.

The Navy had gone so far as proposing a special “Elvis Presley company,” which would be drawn from Presley’s buddies, and others from Memphis. If that wasn’t enough, Elvis would also be assigned quarters entirely for his own use.

The Army, also eager to win his favor, suggested Elvis might be flown globally from base to base in order to boost the morale of the troops.

The Pentagon, for its part, floated the idea of Elvis immediately joining the Special Services, thus sidestepping the need for regular training. But regular training was precisely what Presley wanted. 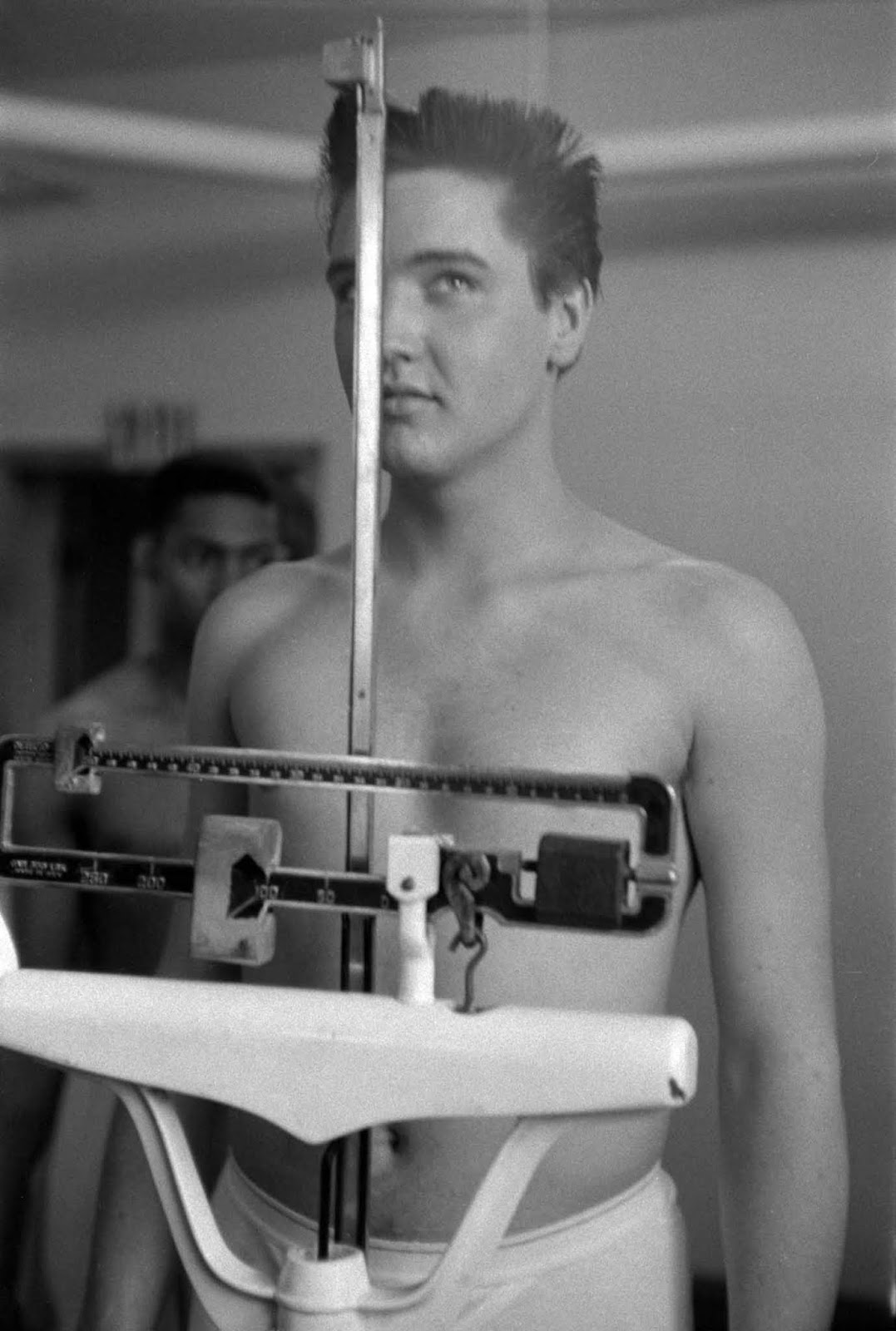 He joined the army but turned down all offers of special treatment. This earned him the respect of many of his fellow soldiers and people back home who previously viewed him in a negative light.

During his service, Presley’s life was affected in many ways, beginning with the death of his mother. Not long before he was to be stationed in Germany, Gladys Presley died of a heart attack brought on by acute hepatitis and cirrhosis at age 46.

When he was stationed in West Germany, he met his future wife Priscilla Beaulieu and became dependent on stimulants and barbiturates.

This unhealthy addiction eventually led to a lifestyle that many found hard to watch. Despite many rumors of pill usage being a cause of his death, Elvis passed away from a heart attack. It is documented that Elvis never drank alcohol or had used drugs, the pills he took were prescribed to him for sleep apnea.

After his release from military service, Presley resumed his musical career, but he found a rock n’ roll scene that had been transformed by the British Invasion. “Presley returned from the Army to find that rock ‘n’ roll tastes had changed dramatically in his absence,” wrote Larry Rohter and Tom Zito in The Washington Post.

“Presley himself underwent a drastic change of style, eschewing his trademark sideburns and hip-shaking music in favor of romantic, dramatic ballads.” However, he found a new fan base among an older age group, thanks in part to his army career. 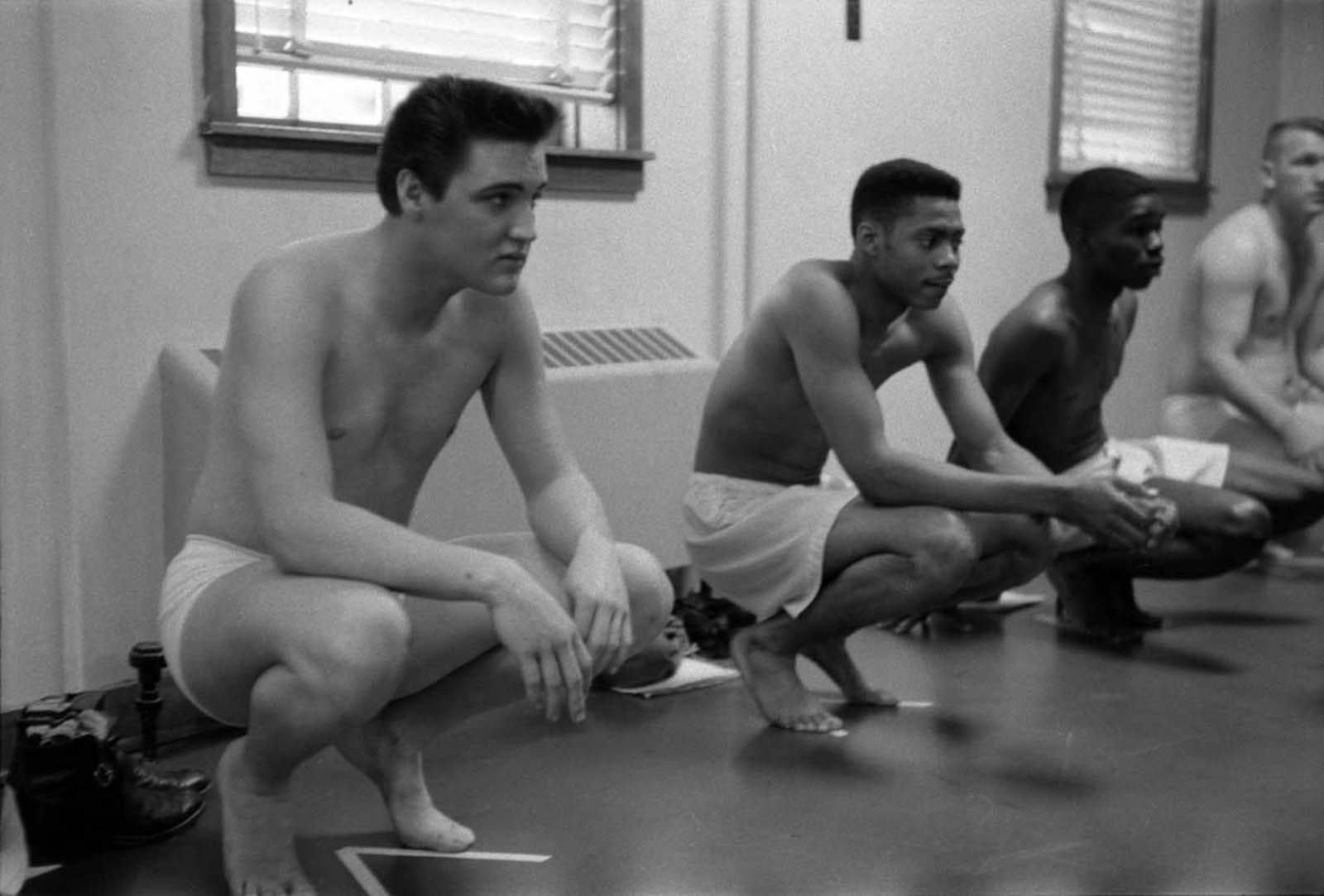 Elvis with other recruits at Fort Chaffee, Arkansas. 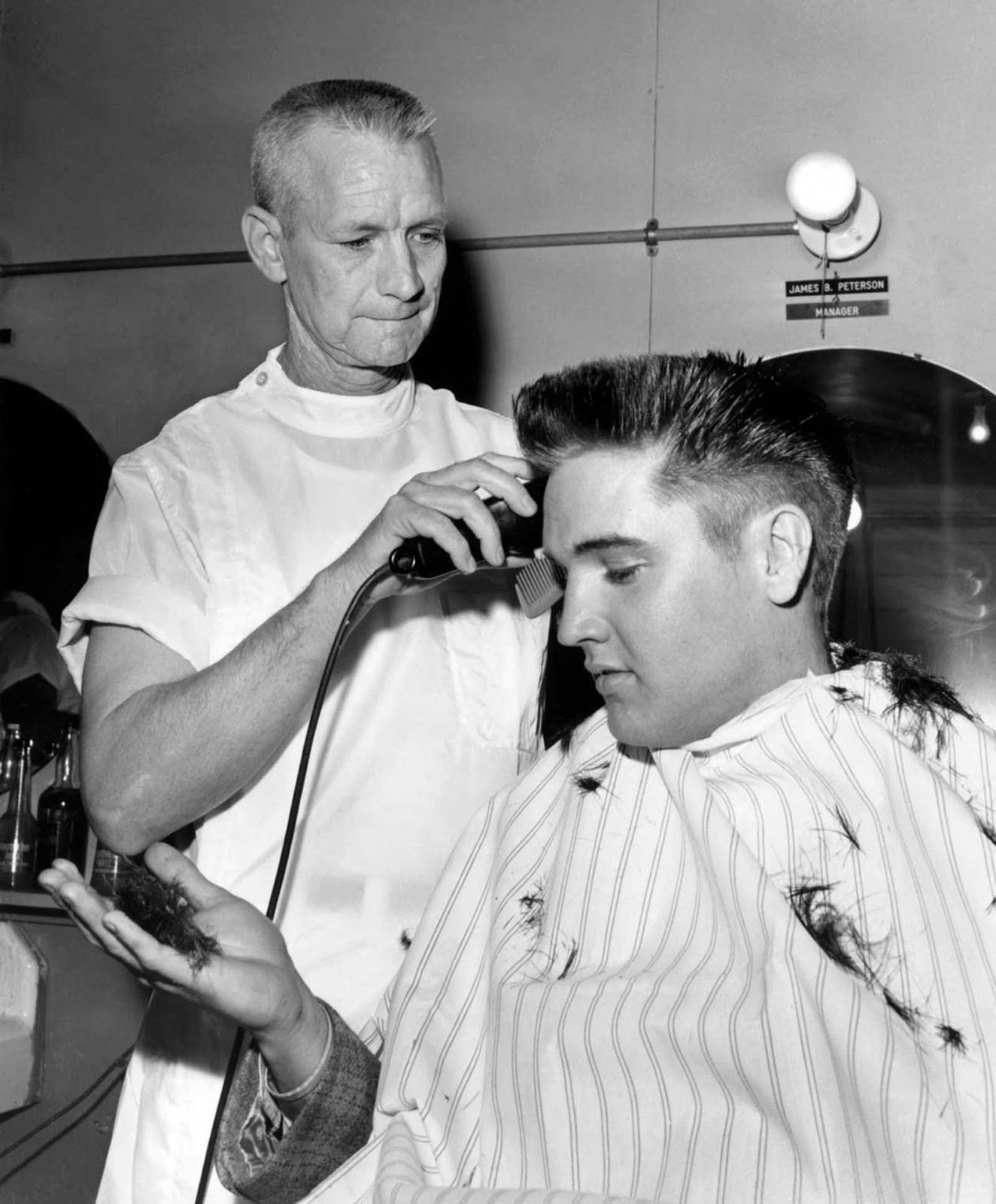 Elvis Presley receives a crew cut on his first full day as a member of the U. S. Army. 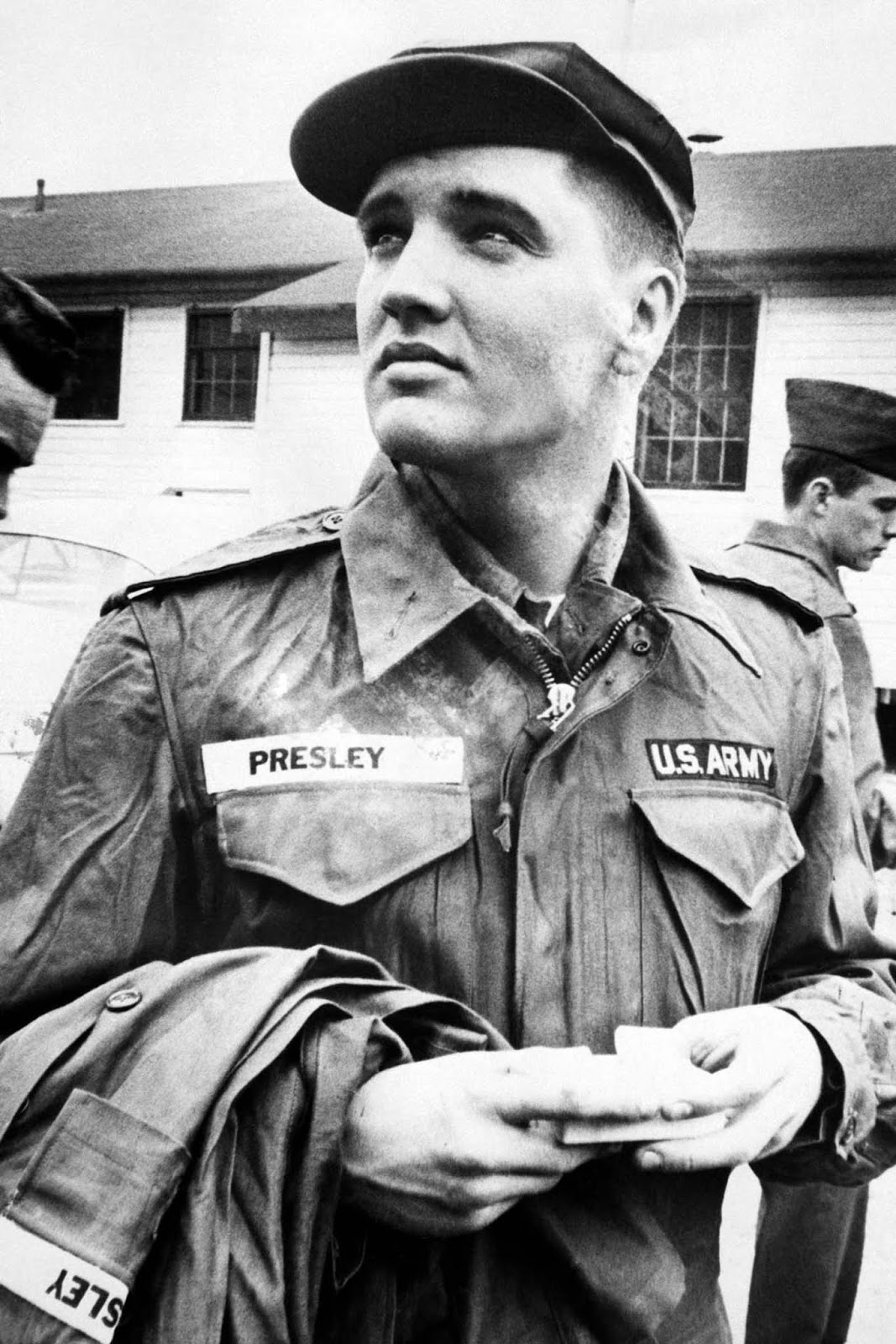 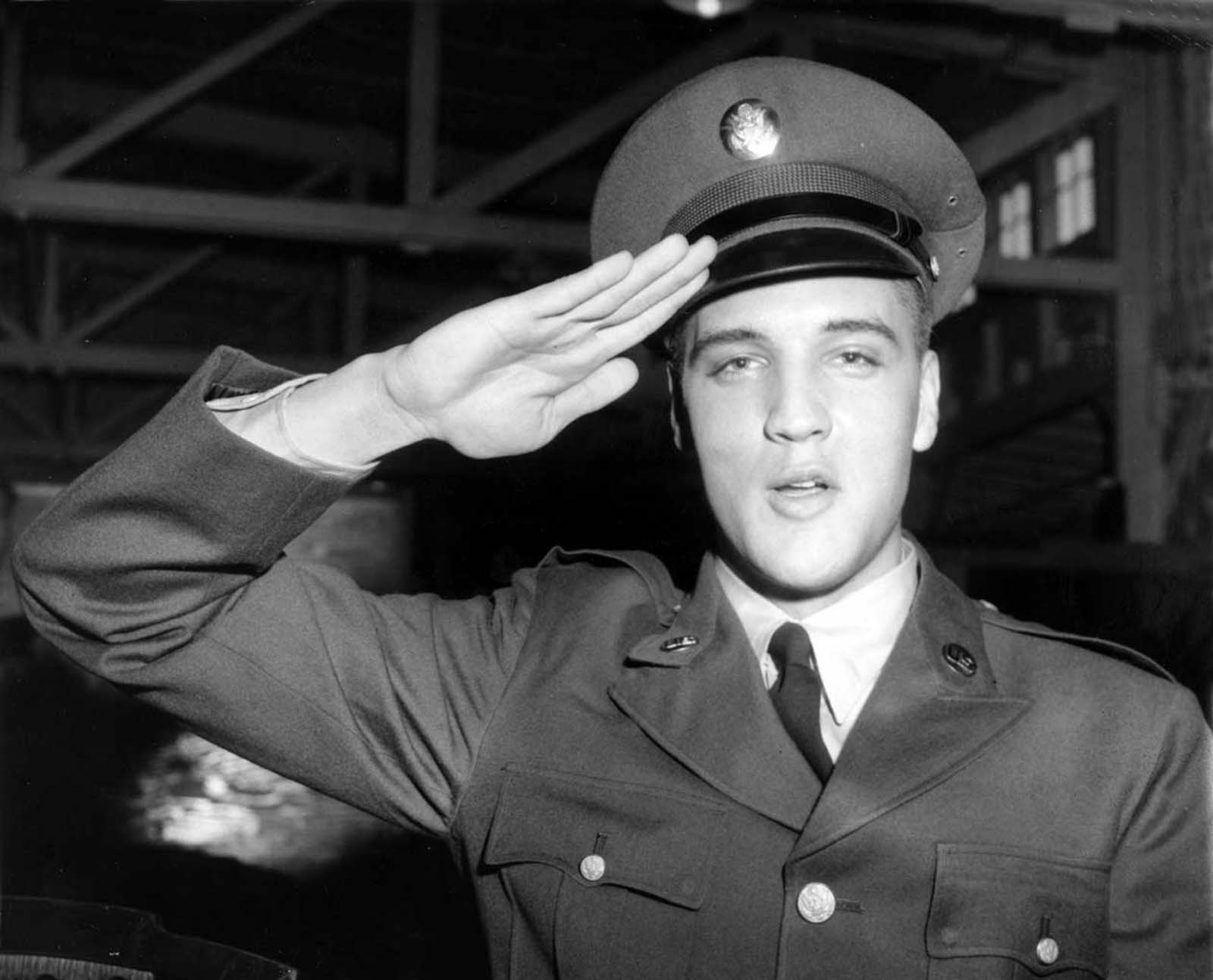 Presley salutes for a portrait during his tour of duty in Germany in February of 1959. 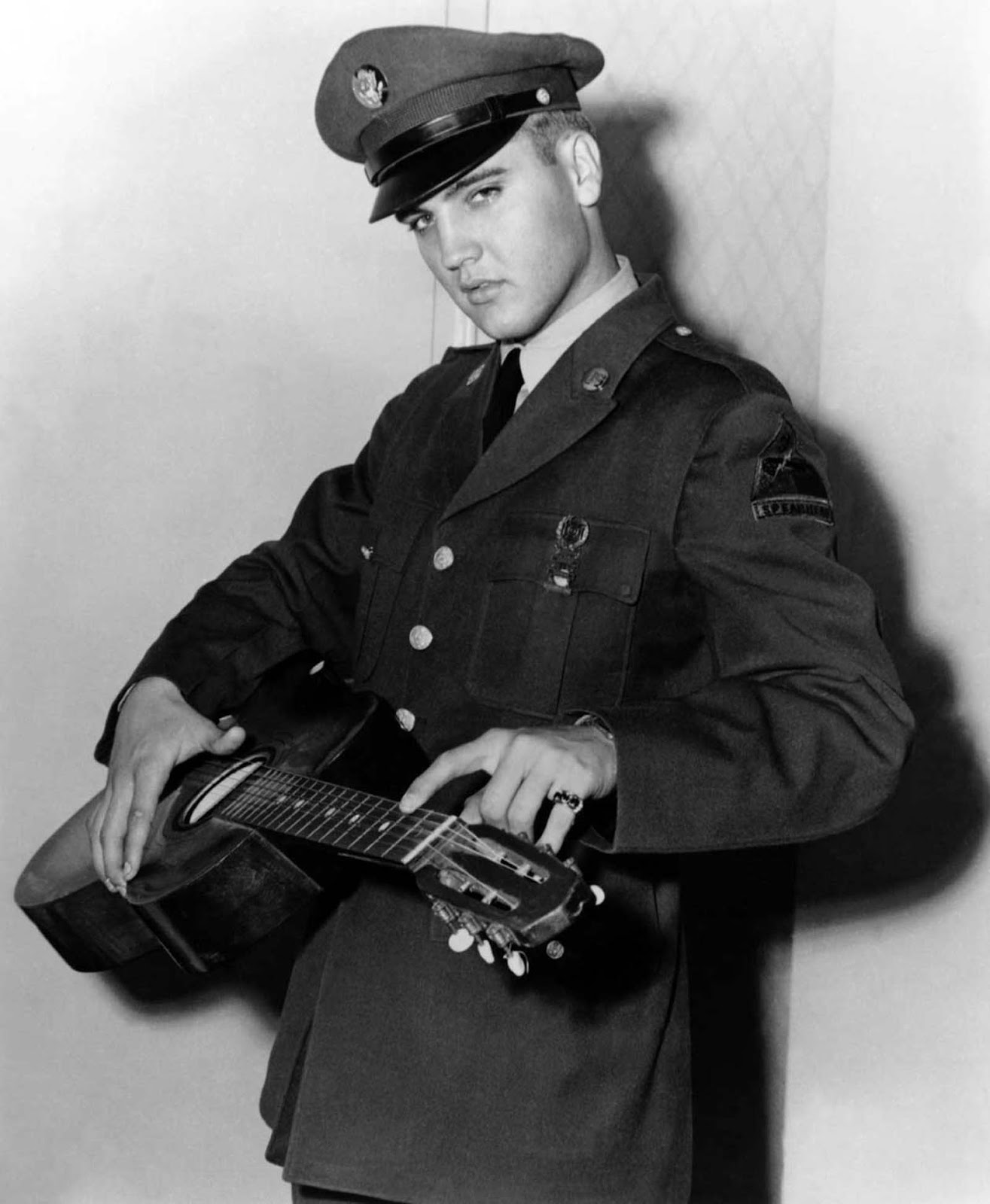 Presley the soldier poses with his guitar. 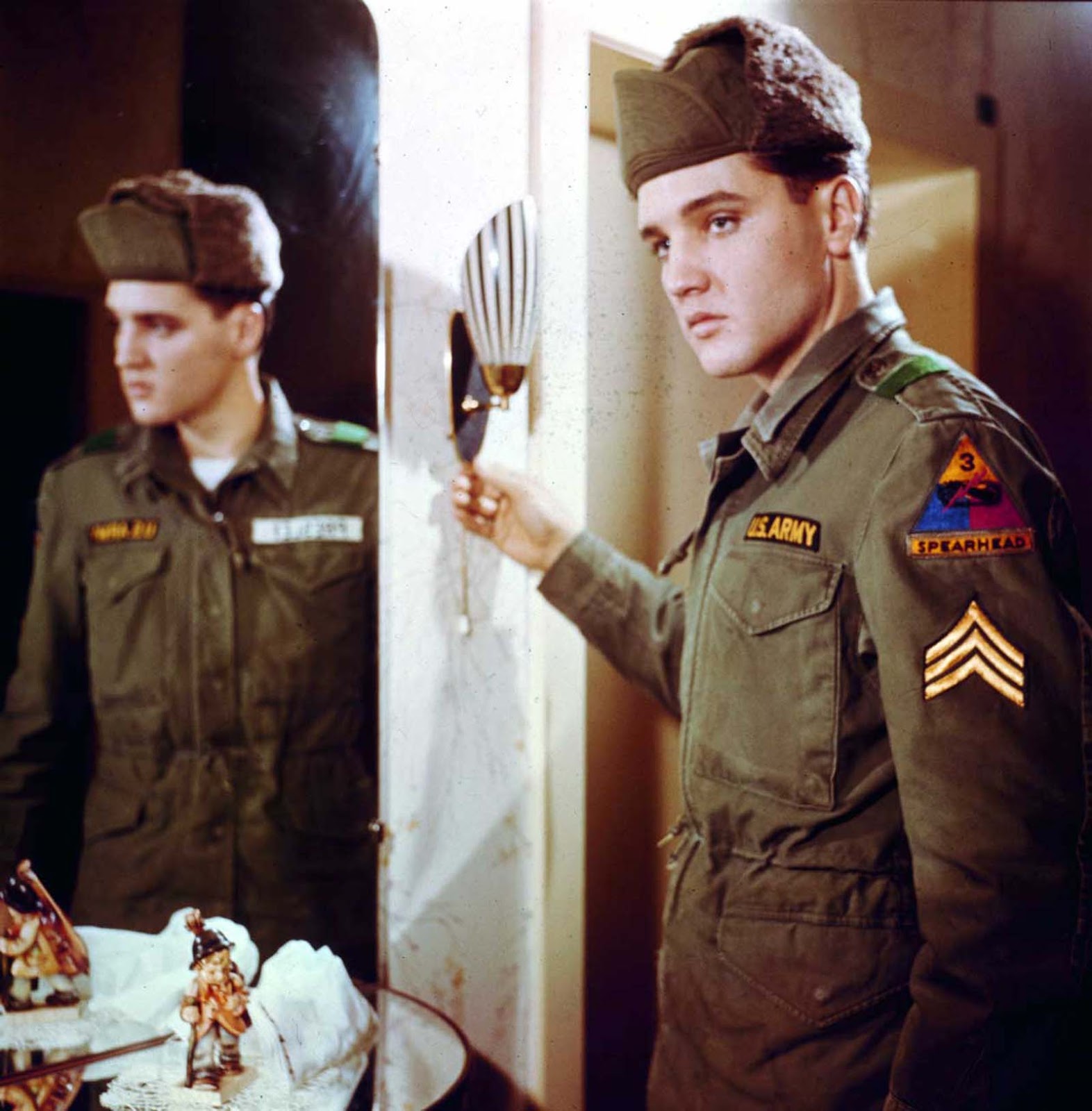 Elvis poses for a portrait next to a mirror during his tour of duty in Germany. 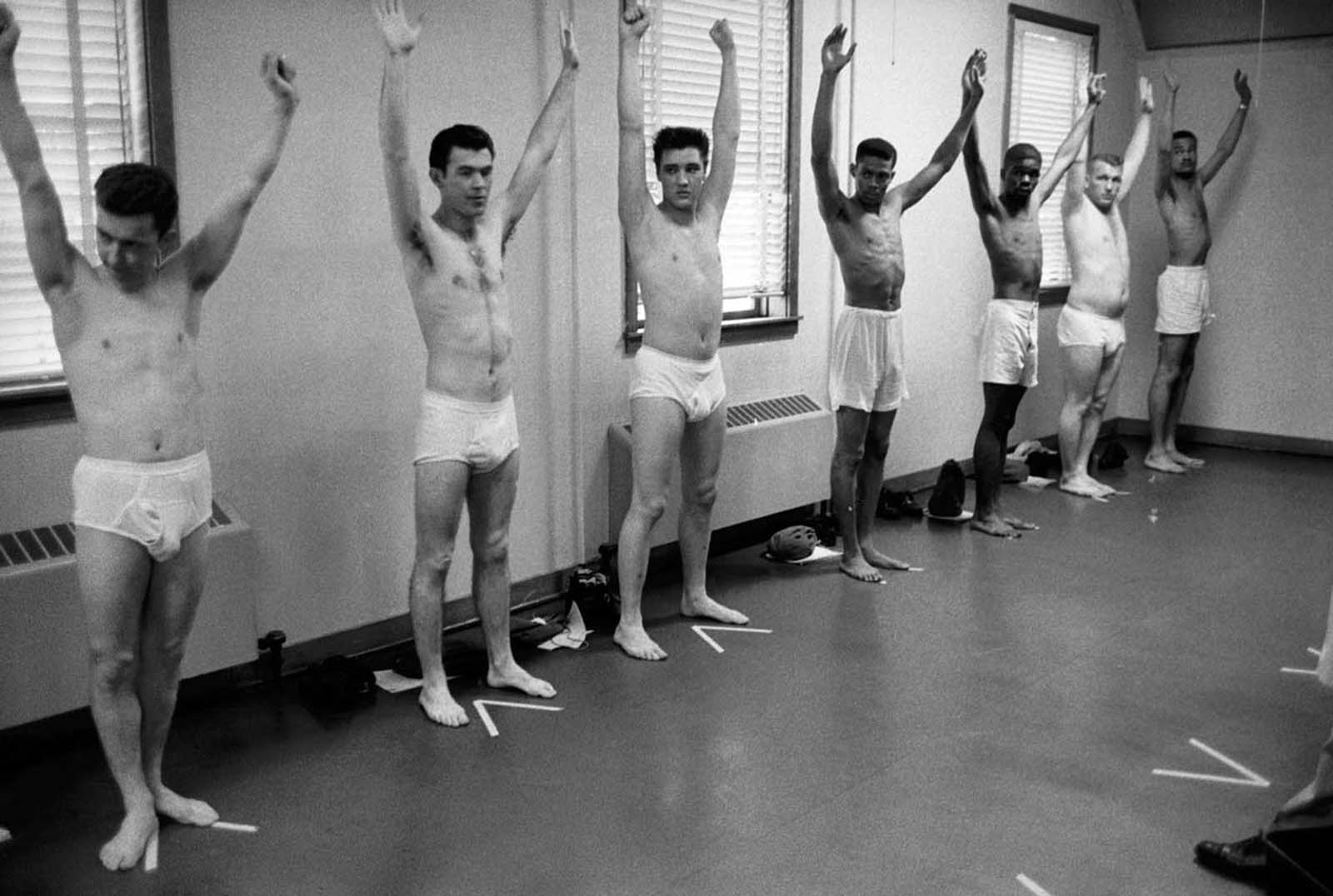 Wearing only underwear, Pvt. Elvis Presley raises his arms along with several other inductees during an inspection at Ft. Chaffee. 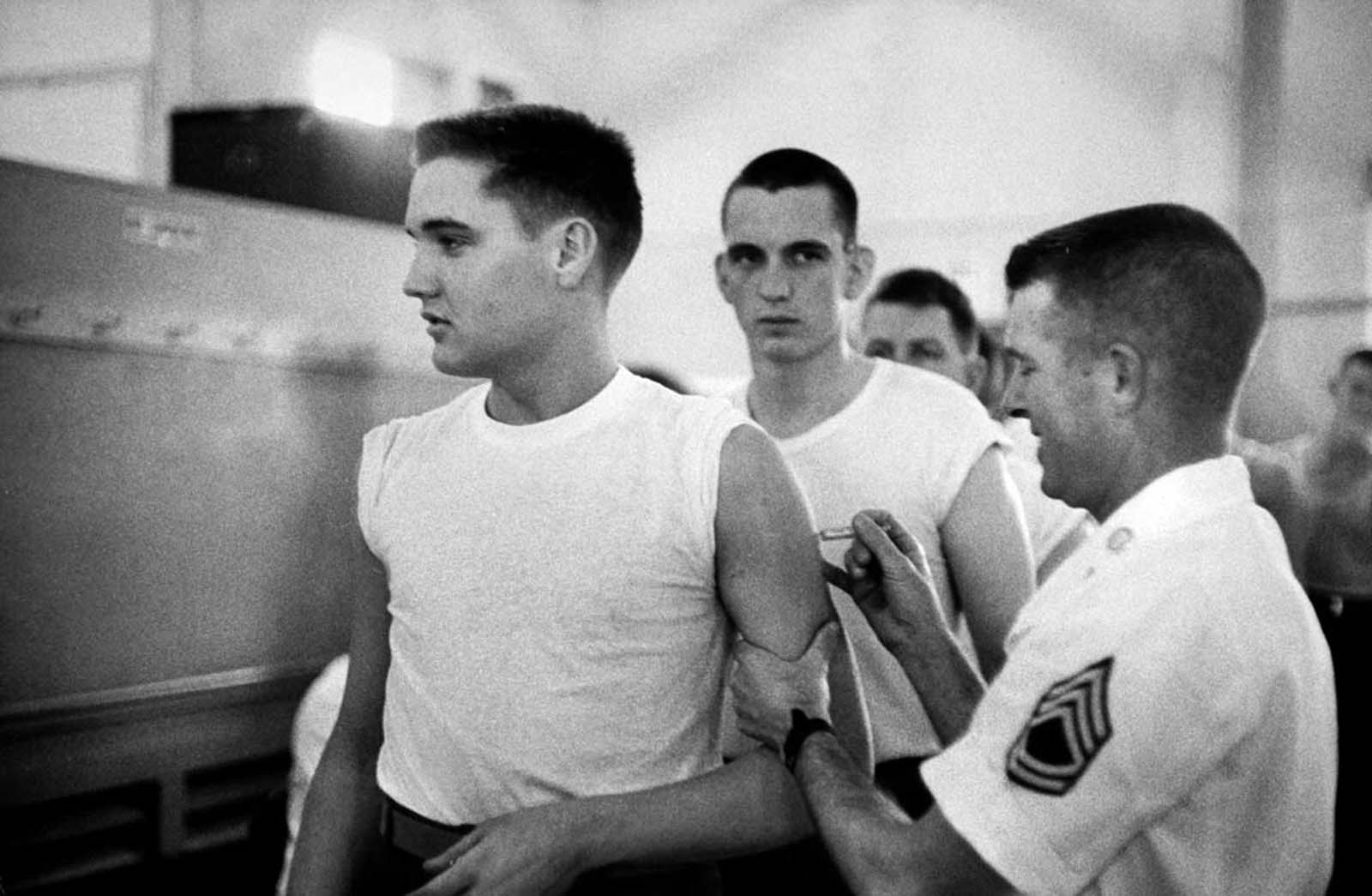 Presley in a t-shirt, getting a shot from an Army doctor during his pre-induction physical at Kennedy Veterans Hospital. 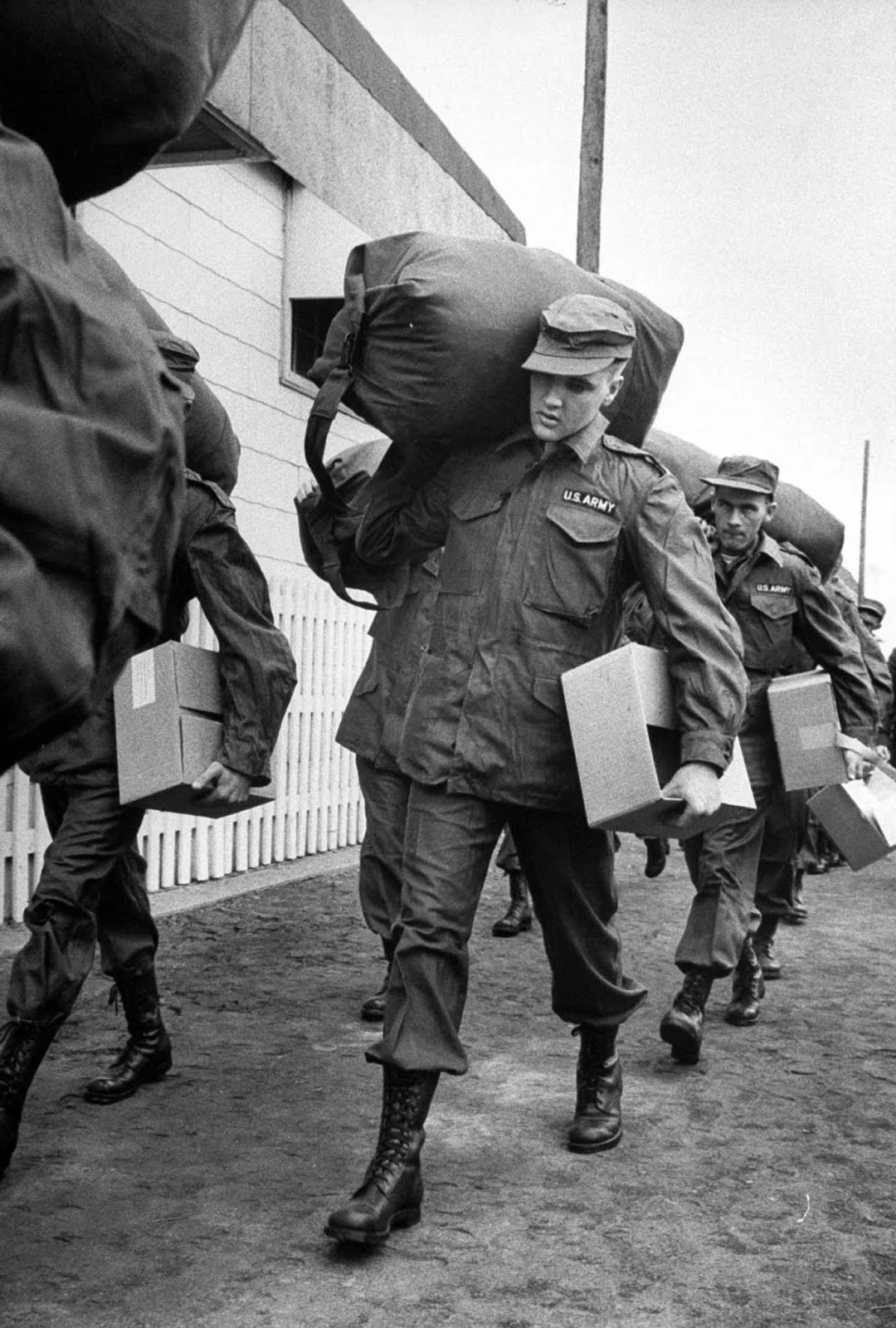 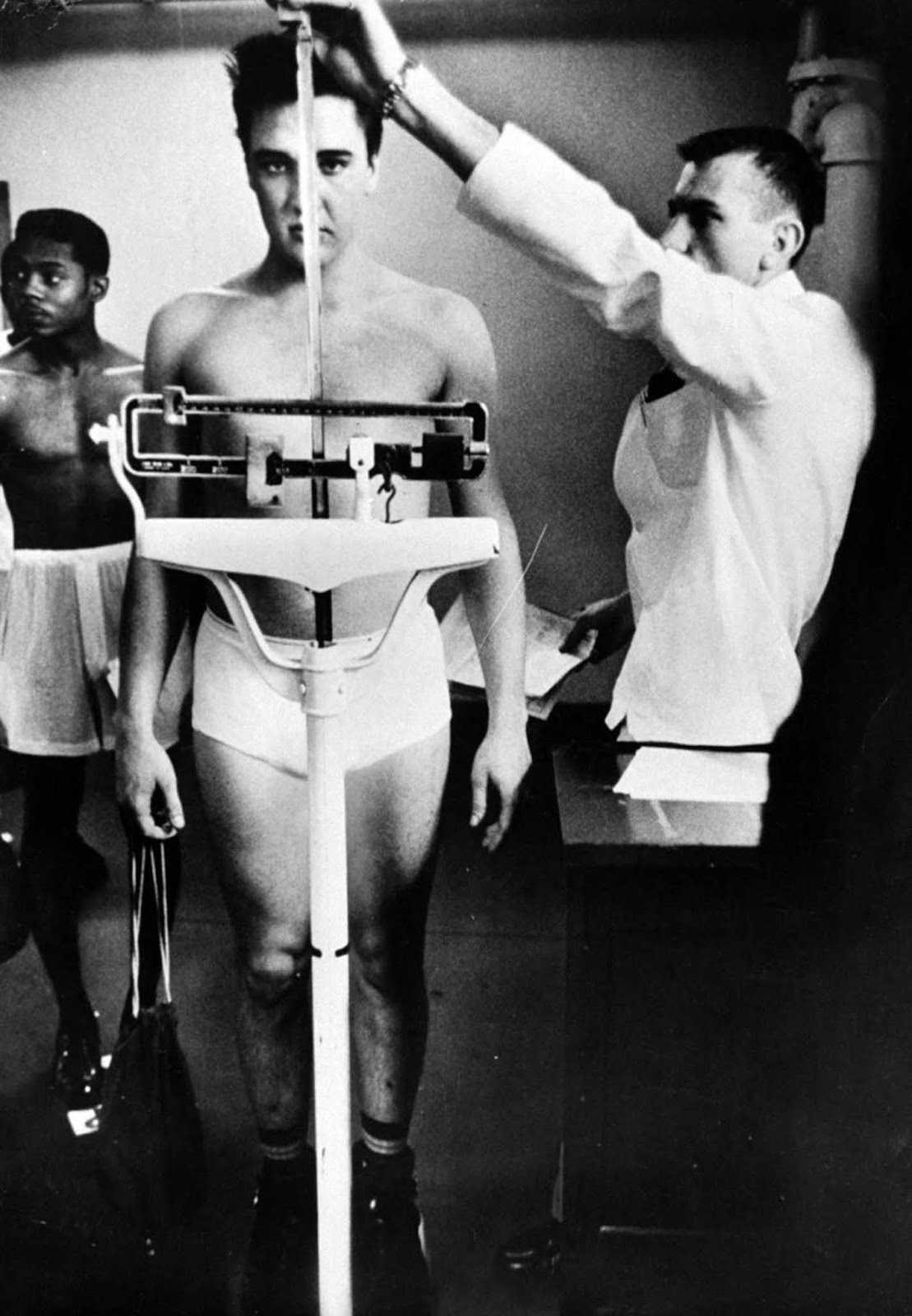 Presley clad only in his skivvies as he stands on a scale while an Army doctor measures his height at a pre-induction physical examination at Kennedy Veterans Hospital. 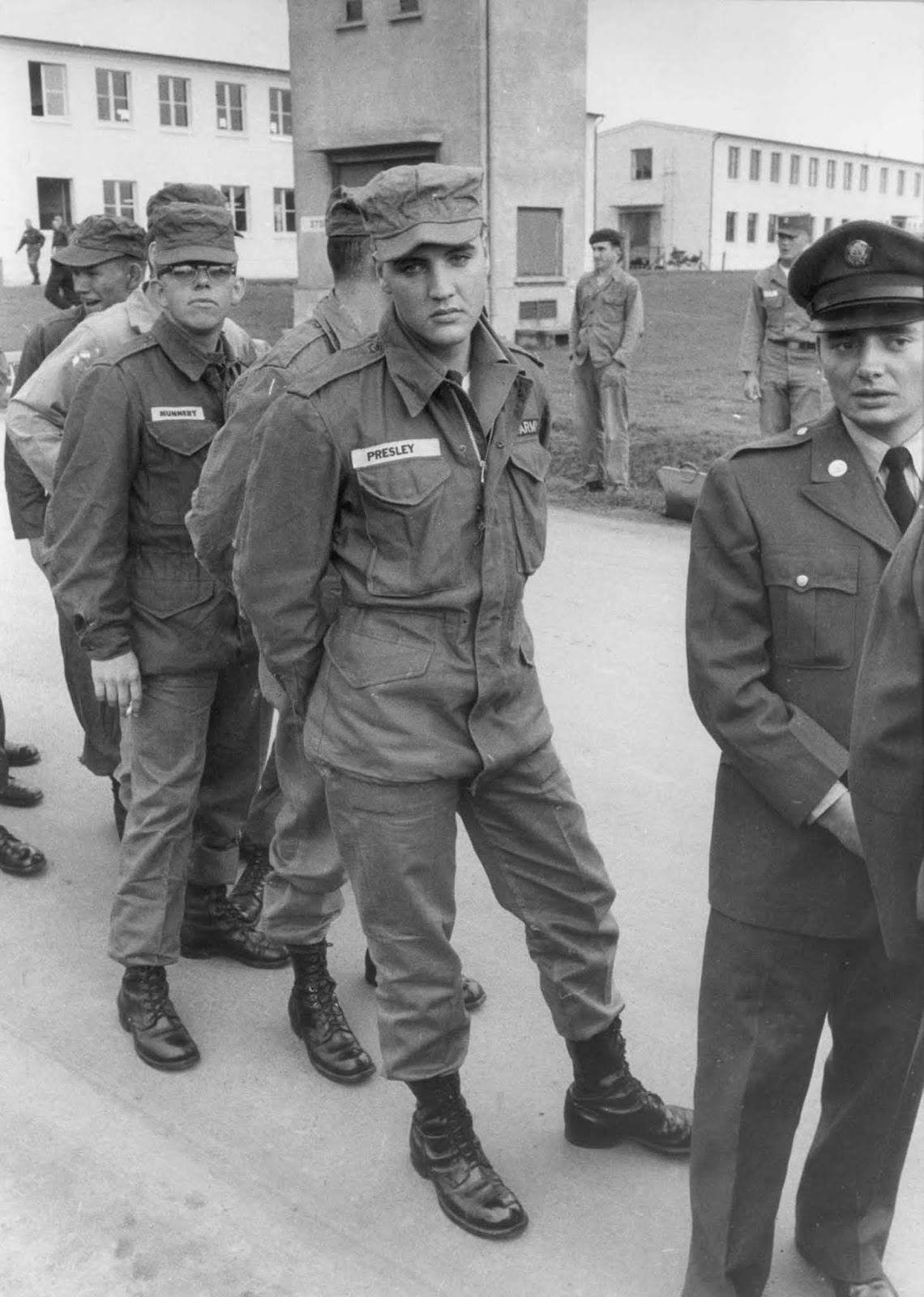 Presley stands in line with other enlisted men and officers on a military base, Germany. 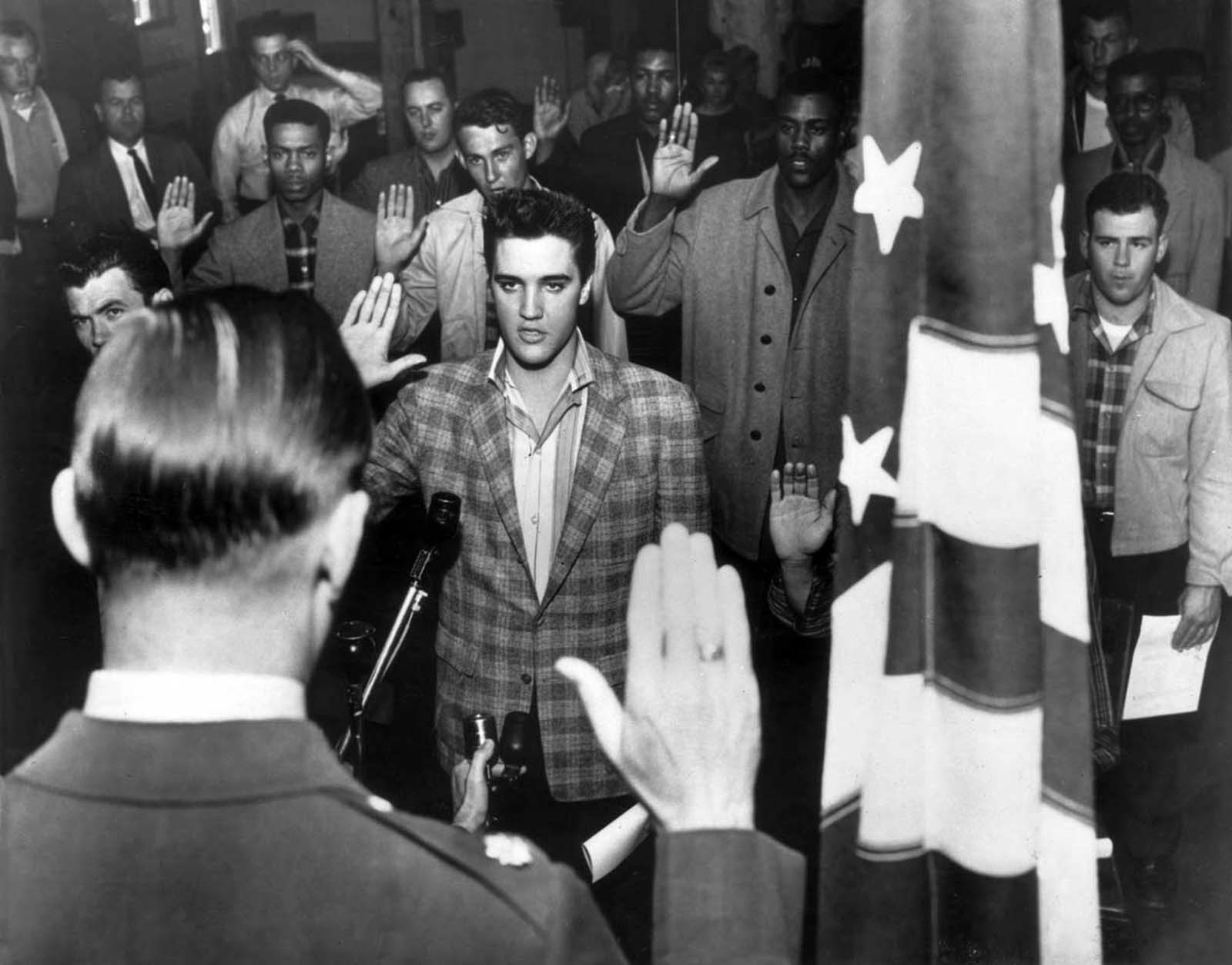 Elvis Presley stands with a group of young men at an induction center, raising their right hands as they are sworn into the United States Army by an officer standing next to an American flag.