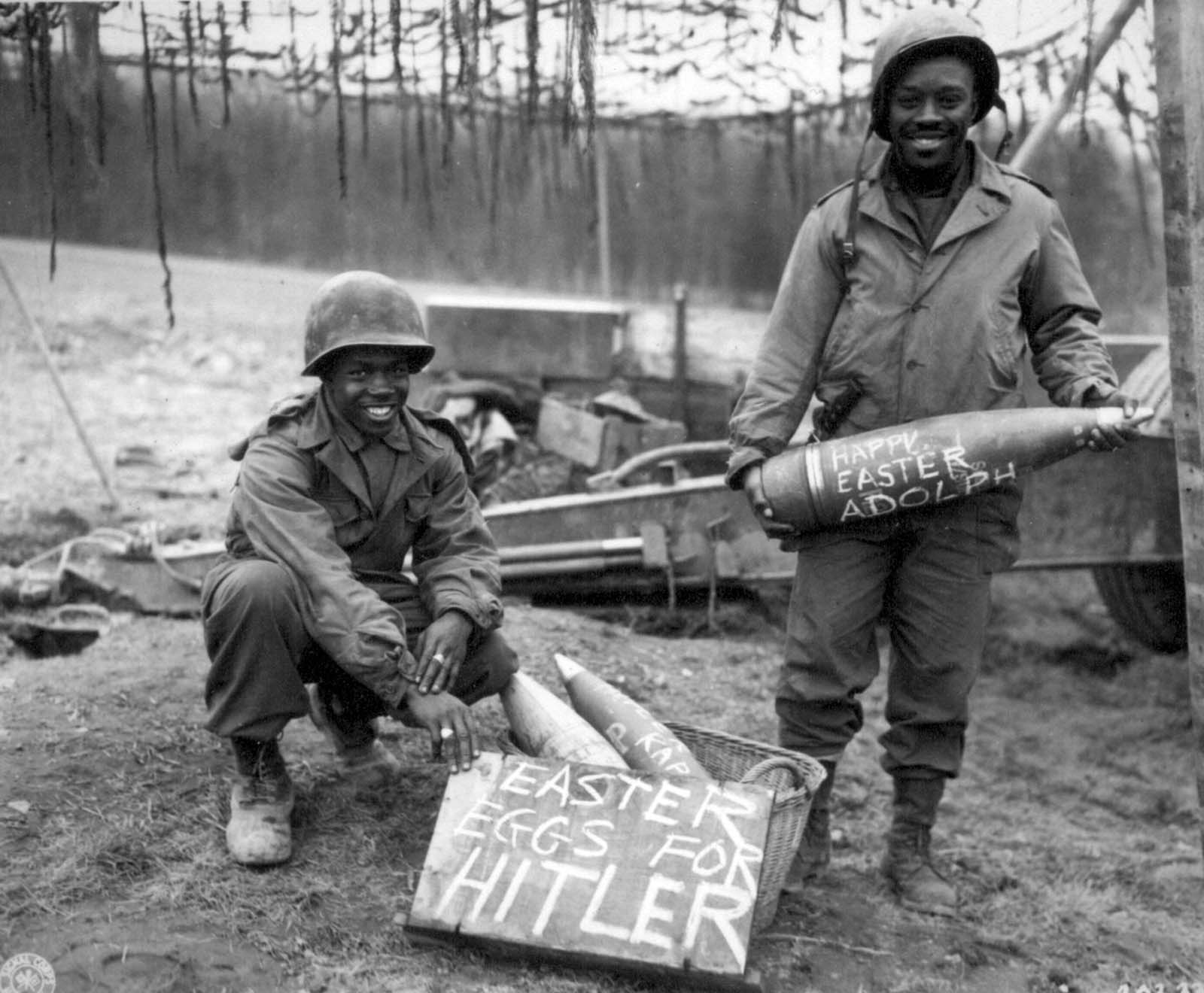 Two black American soldiers with special artillery ammo for Hitler. Photo was taken on March 10, 1945, during the Battle of Remagen.

Scrawling such messages on artillery shells in World War II was one way in which artillery soldiers could humorously express their dislike of the enemy.

The 333rd Field Artillery Battalion suffered tremendous casualties in the early stages of the Battle of the Bulge in late 1944, being overrun on December 17. The survivors ended up in the 969th Artillery Battalion for the rest of the battle, where they provided vital fire support for the 101st Airborne Division during the siege of Bastogne.

The sad part of course is that these two black soldiers were fighting for a country that was discriminating against them. Now, while the U.S. didn’t treat African-Americans nearly as bad as Hitler treated Jews, these young men were willing to die for their country, even though a huge chunk of their country was completely built against them. It’s a bit ironic that the U.S. defeated Nazi Germany with a segregated army.

The US Army was segregated during World War II, but the attitudes towards African-Americans in uniform were undergoing change in the minds of some generals, including Eisenhower and Bradley. At parades, church services, transportation, and canteens the races were kept separate.

Black troops were often not allowed to fight. They had to drive the trucks and deliver supplies to towns after the Allies had liberated them. Curiously enough, this ended up with the townsfolk having more of an appreciation for the blacks than the whites because they gave them food, shoes, etc.

When they went to Germany, they were actually accepted more there than in America. There was lots of footage of them dancing and partying with locals. Some wrote letters describing their treatment by the Germans as better than how people treated them in America.

Some even wrote about how they wished Hitler had won the war. They found it hard to return after getting the taste of equality. Some of the early civil rights leaders and prominent figures were veterans of WW2 and historians point out that the soldier’s experiences overseas set the stage for the civil rights movement.

Due to the segregation and reduction of most black soldiers to noncombat roles, they constituted well under 1% of U.S. military deaths during World War II. But even so, the black units were highly decorated. In 1948 the military ended segregation in the army by the order of President Truman. Korea was the first war black Americans fought in the same units as whites did.