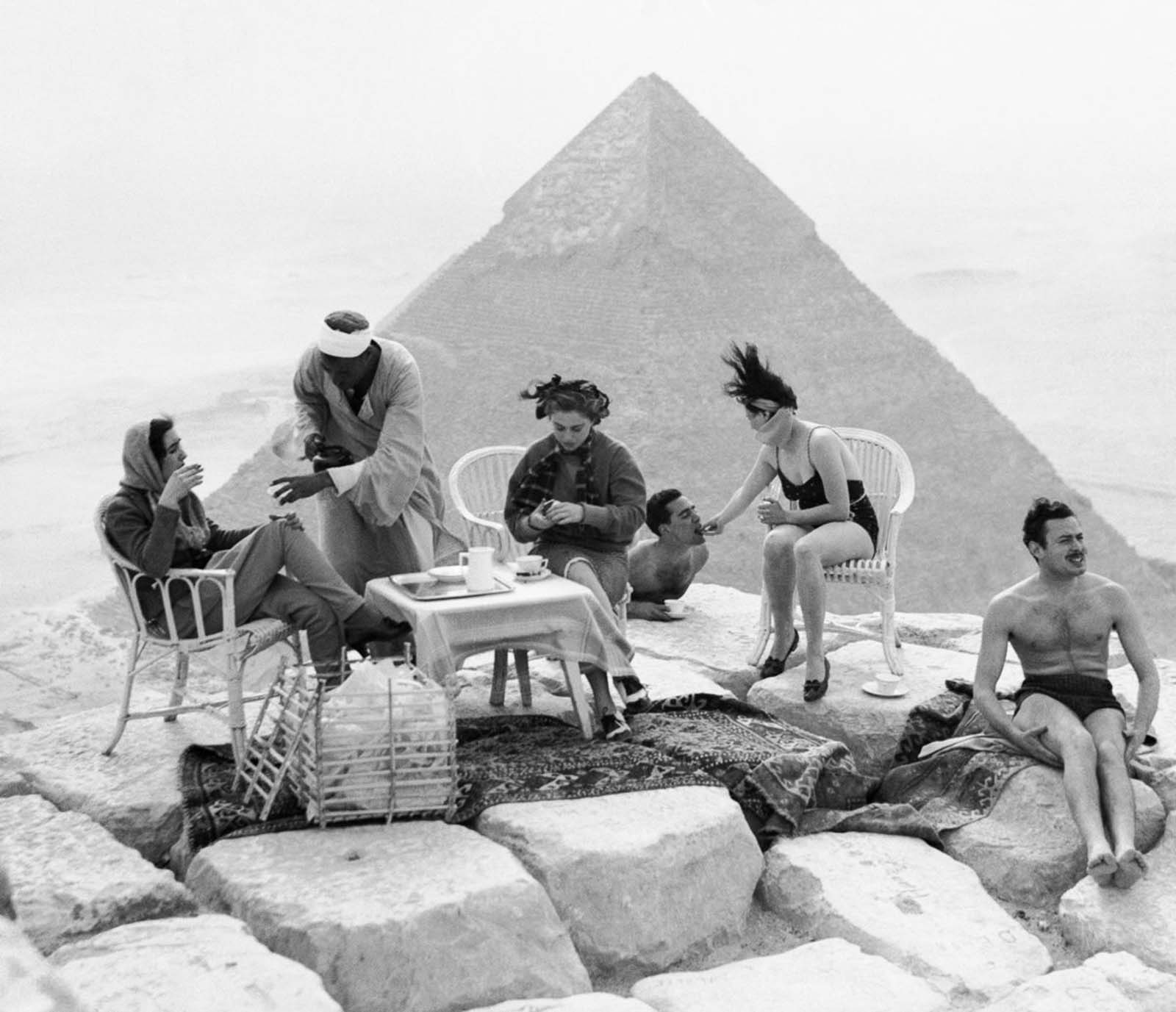 By the late eighteenth century, Egypt had been reduced to nothing more than an impoverished and neglected corner of the Ottoman Empire, crippled by endless power struggles among its Mamluk leadership.

Then in 1798, Napoleon arrived at the head of a French army, closely followed by the British, who had hitherto shown little interest in Egypt. After the French retreat, Egypt became gradually Westernised under the Albanian Ottoman Muhammad Ali Pasha, so that by the time the English novelist Thackeray visited Alexandria in 1845, the Nile ‘was lined with steel mills’ and looked ‘scarcely Eastern at all’.

Egypt’s early tourism trade started in the 19th century and increased in popularity alongside the rise of Egyptology as an academic and amateur pursuit. Especially, after the completion of the Suez Canal in 1869, it became much easier to visit Egypt.

Organized group holidays offering an all-inclusive price that reduced the travelers’ costs were an innovation of the 1840s. Thomas Cook (1808-1892), a brilliant entrepreneur from England, is seen as their inventor and thus the pioneer of commercialized mass tourism.

In the 1870s, Cook offered his famous tour of Palestine and the Nile, a way for wealthy people to explore the wonders of Ancient Egypt. Many of these tourists took pictures in front of the ancient ruins or the Great Sphinx, some of them even climbed all the way to the top of the pyramids.

Scores of photographers, seeking to establish their studios, began arriving in Egypt following the tourist gaze. They hauled heavy equipment across the desert to photograph the wonders of the Nile Valley. Some opened studios in the larger cities where they sold their wares to tourists; a few were engaged by Egyptologists to document excavations. Travelers exploring the monuments of ancient Egypt could return home with souvenir photographs of the sights they encountered.

For Europeans, Egypt and Egyptian history offered a more vivid and exotic picture of the ancient world than probably any other culture. With a history covering over 3,000 years, dynasties of pharaohs lasting for centuries, and extraordinary figures like Alexander, Cleopatra, and Tutankhamun illuminating the story, this is hardly surprising.

The pictures collected here are part of a collection documenting the British occupation of Egypt and show the early tourists exploring the ruins of Ancient Egypt. 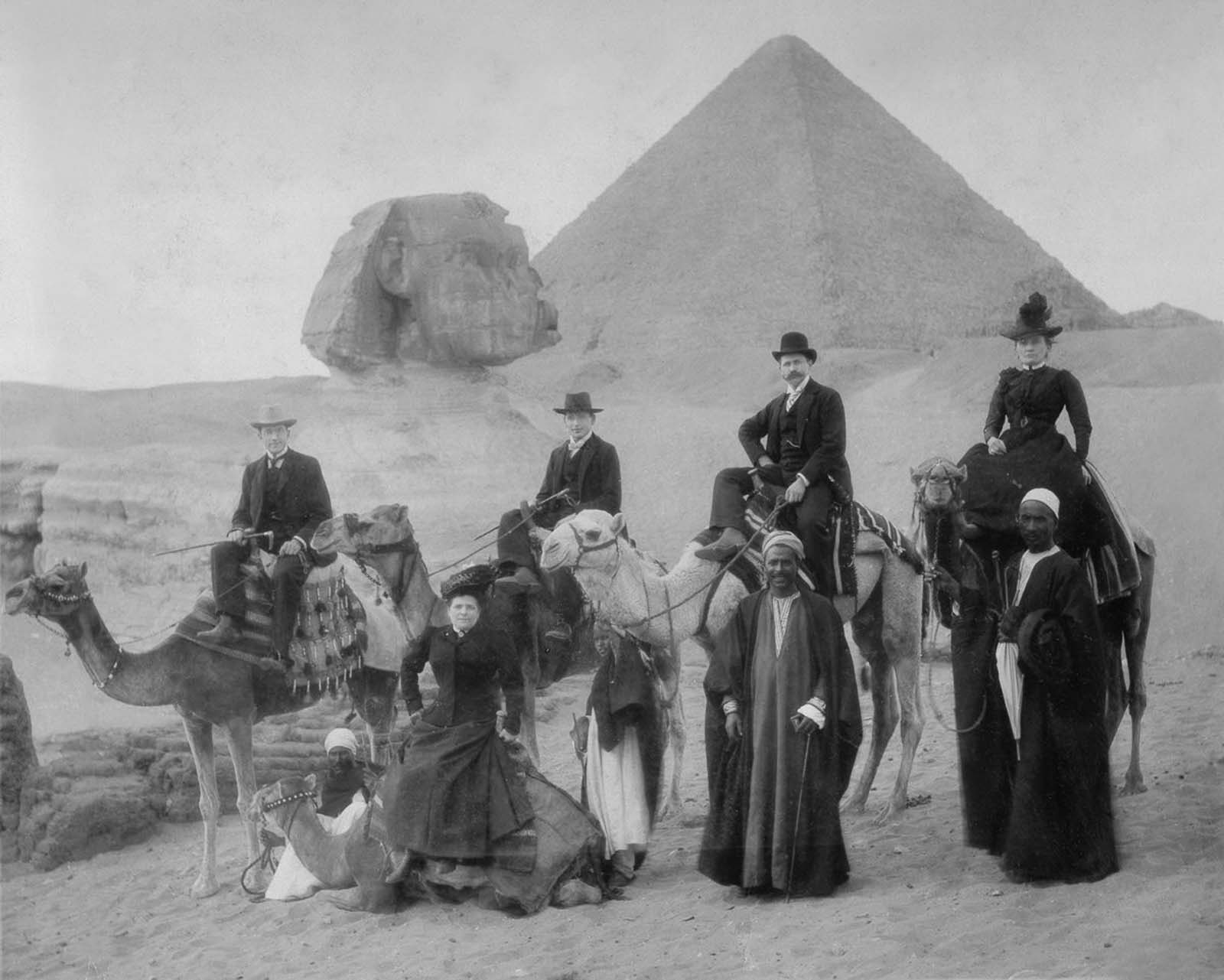 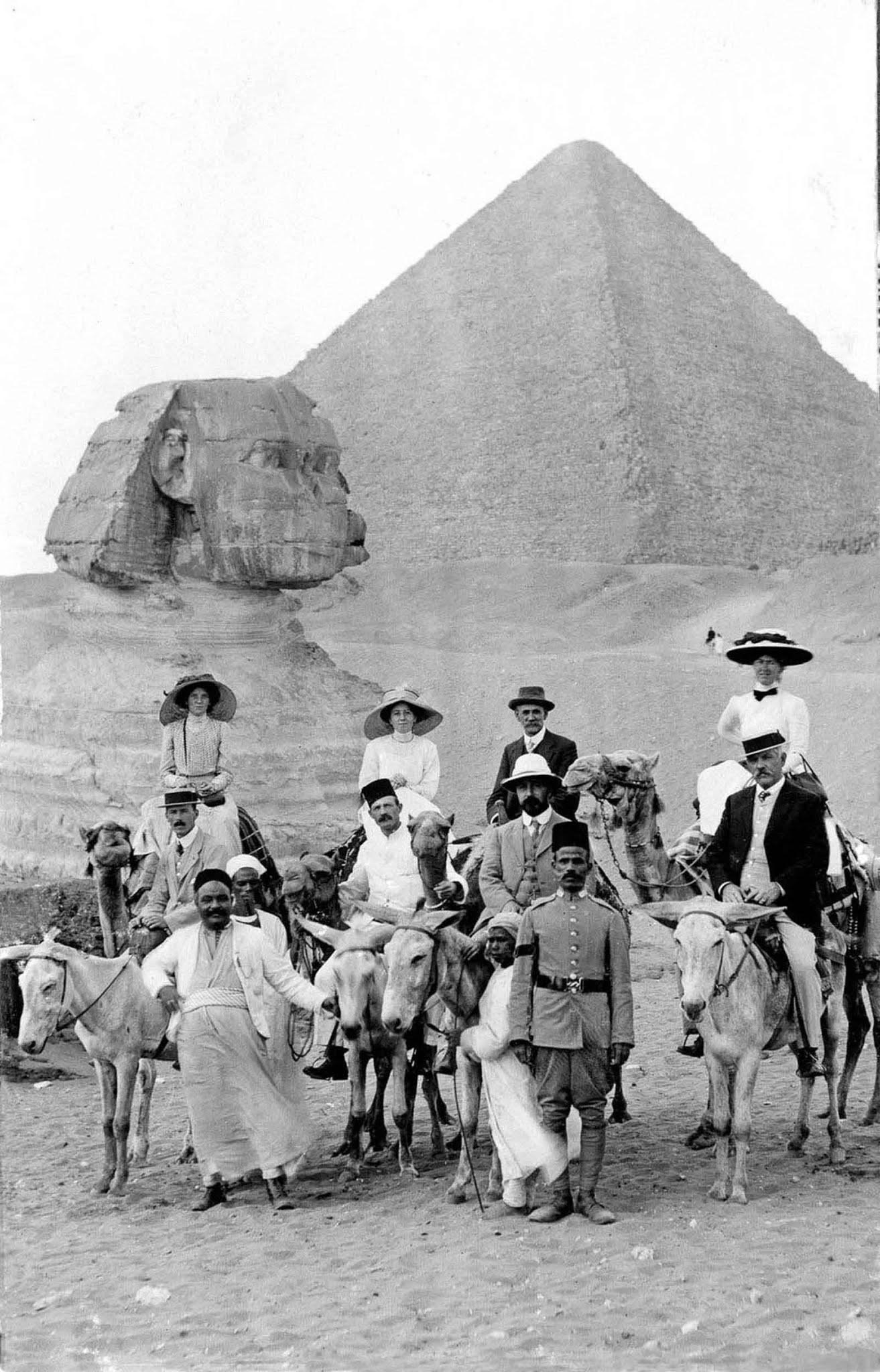 Britsh tourists in front of the Great Sphinx. 1910. 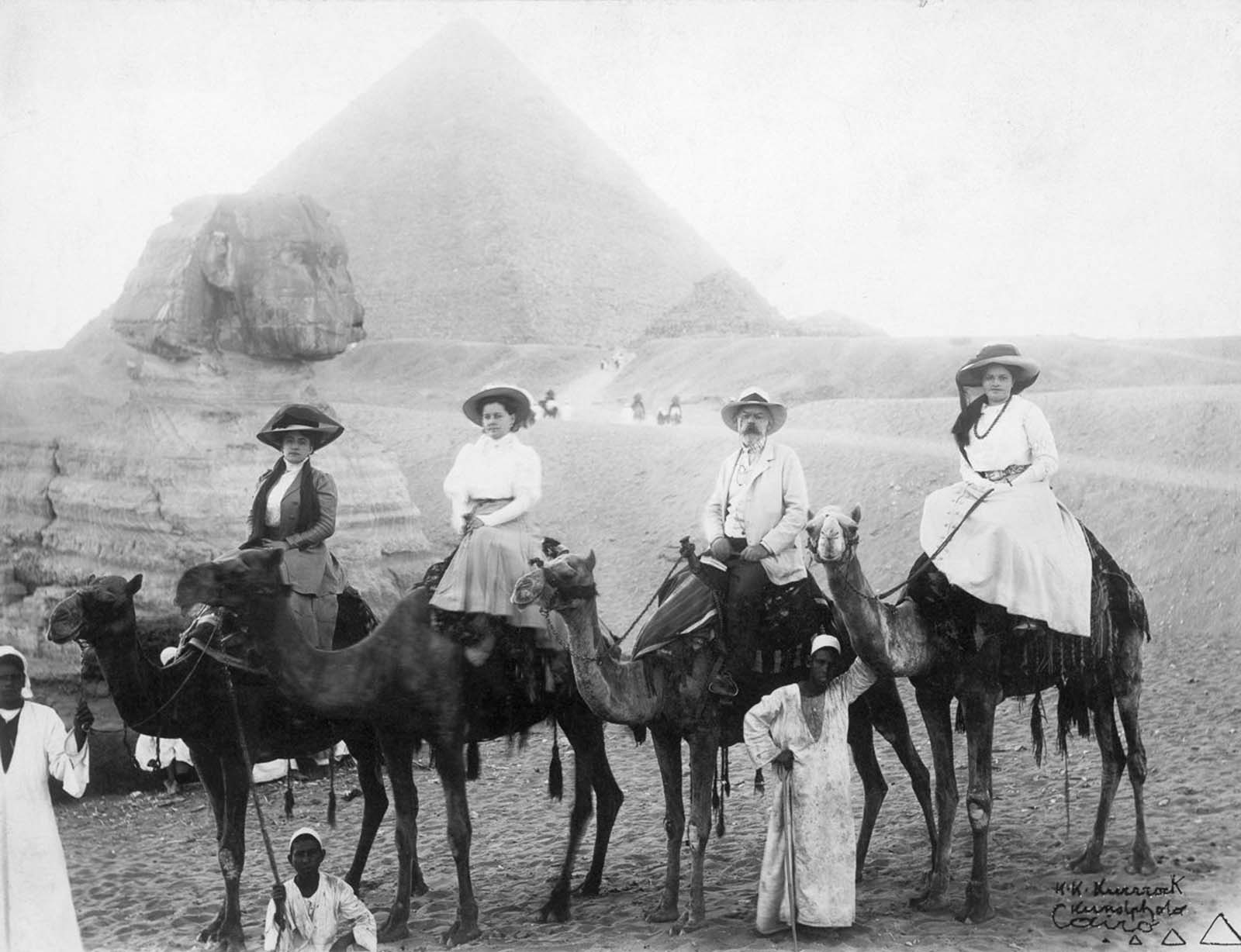 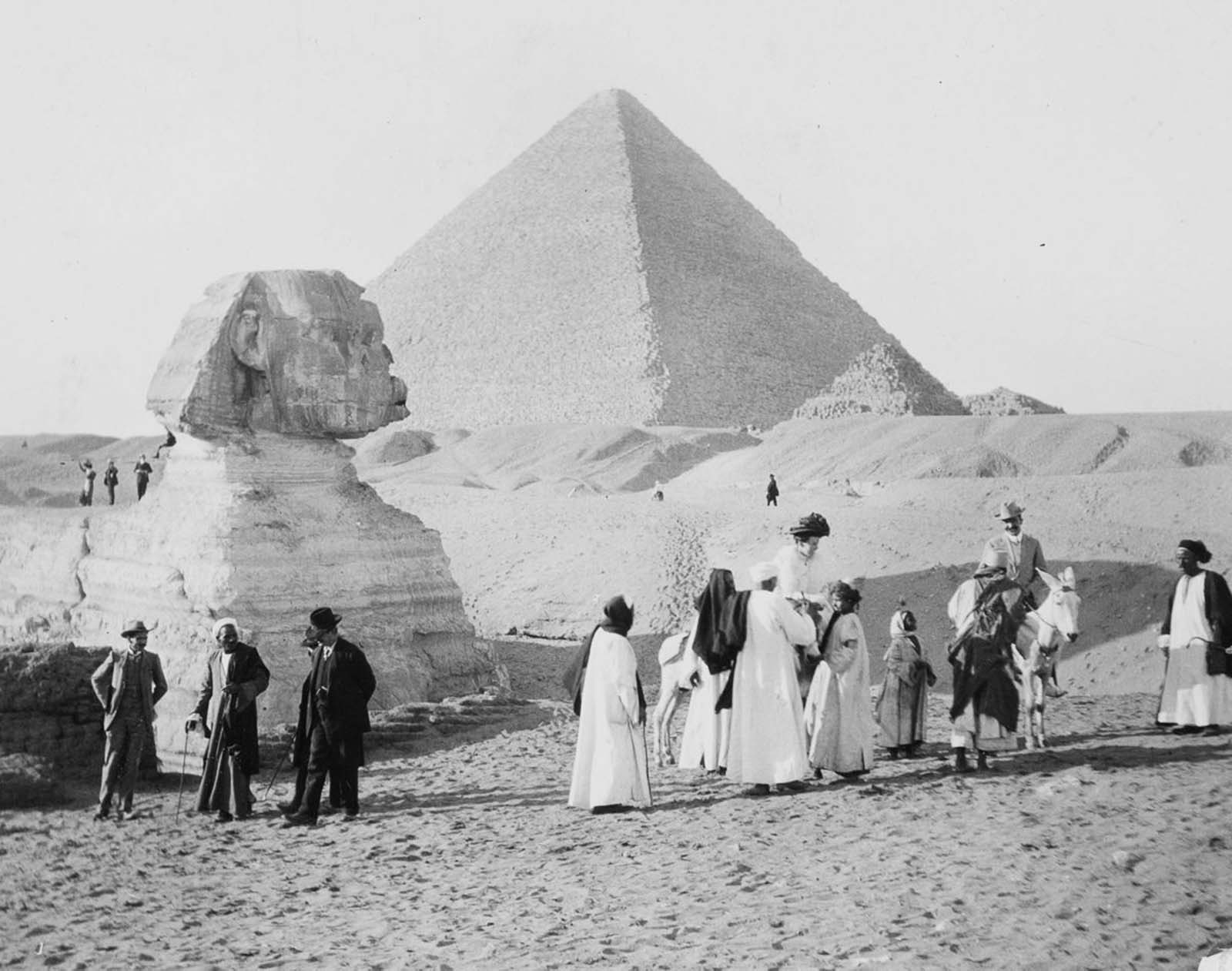 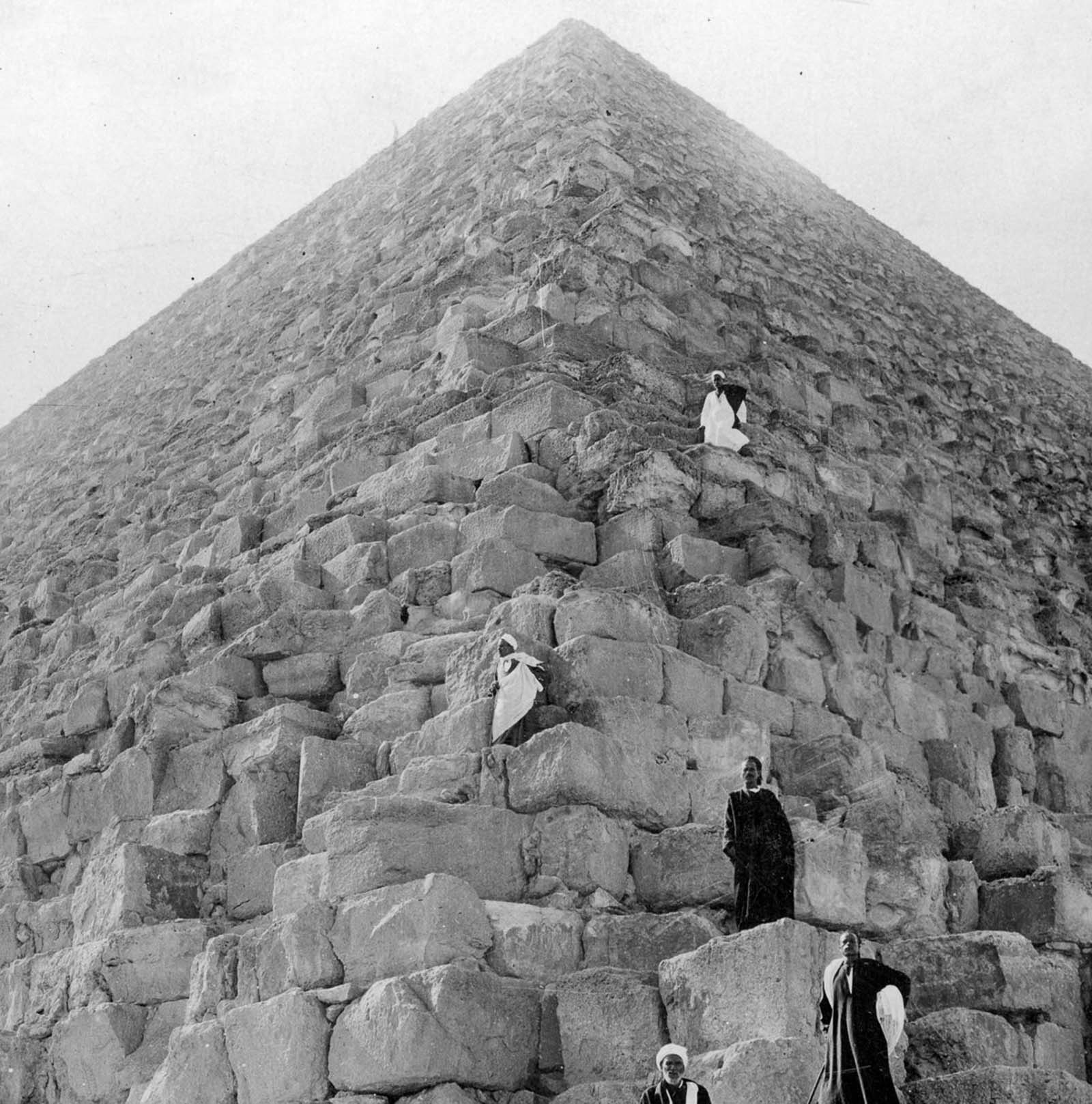 Some of the more adventuresome tourists were determined to see the view from the top of the 455-foot Pyramid of Cheops. 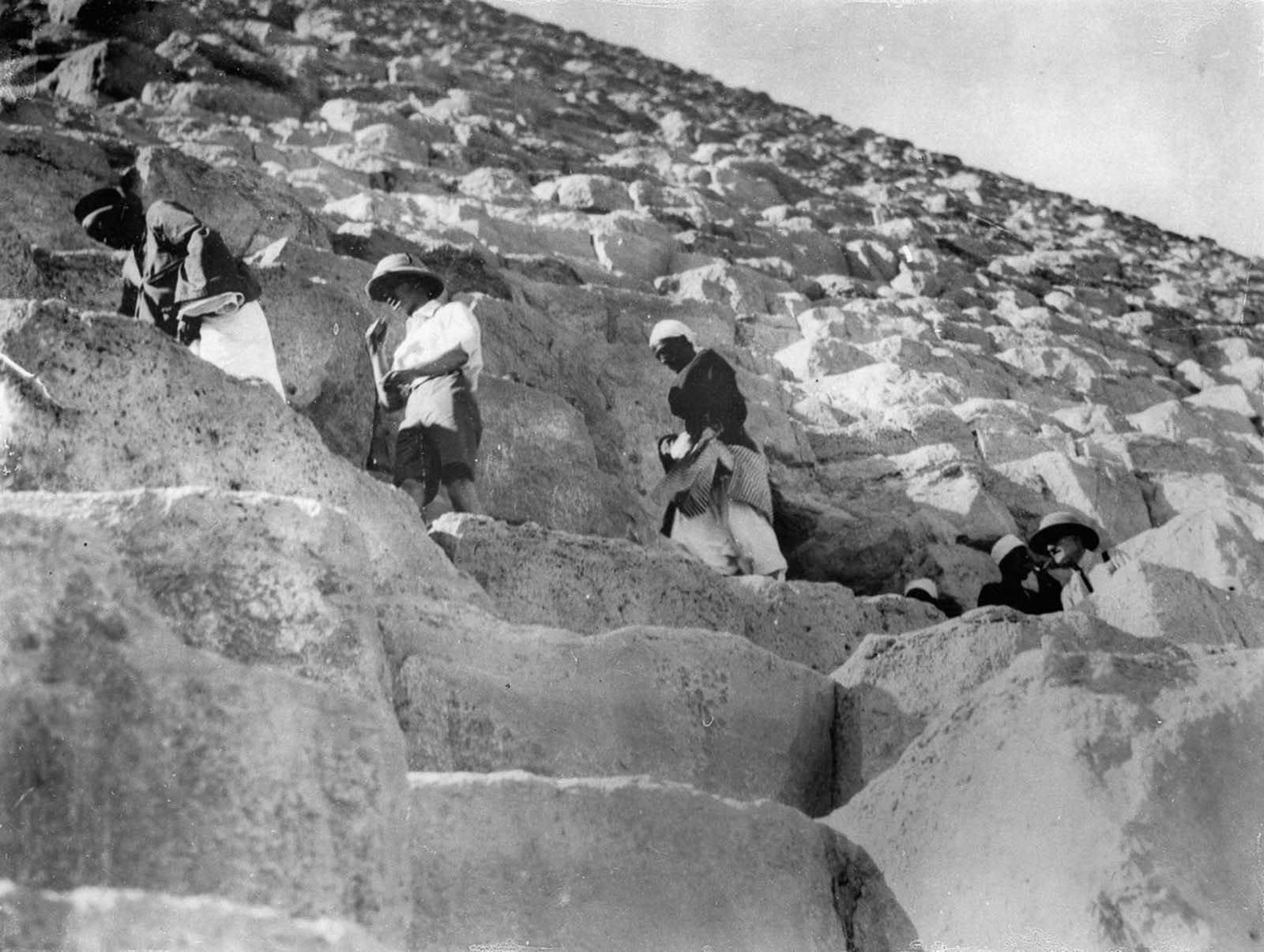 The Prince of Wales and the Duke of Gloucester climb one of the pyramids. 1930. 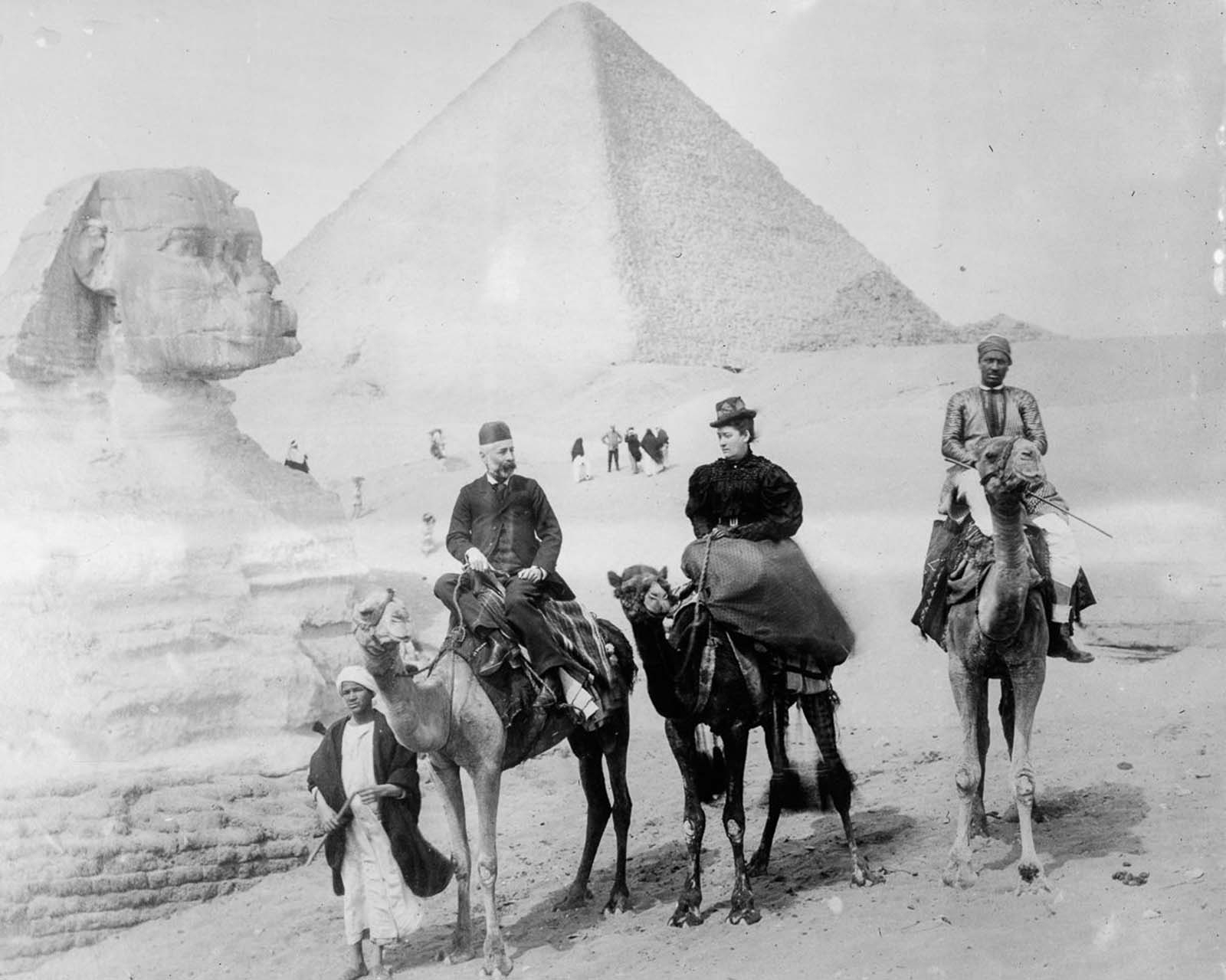 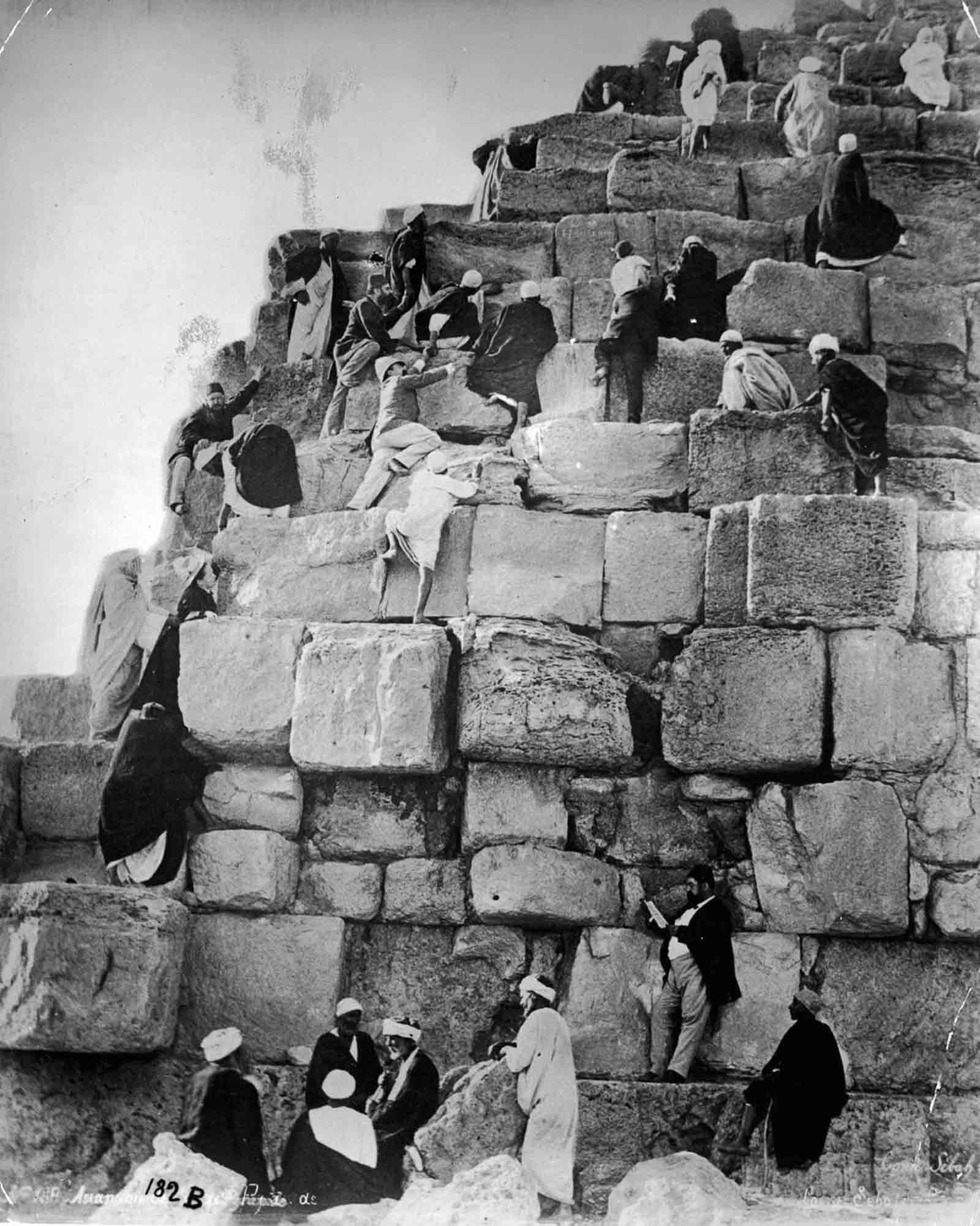 Egyptians and tourists clamber up one of the pyramids. 1880. 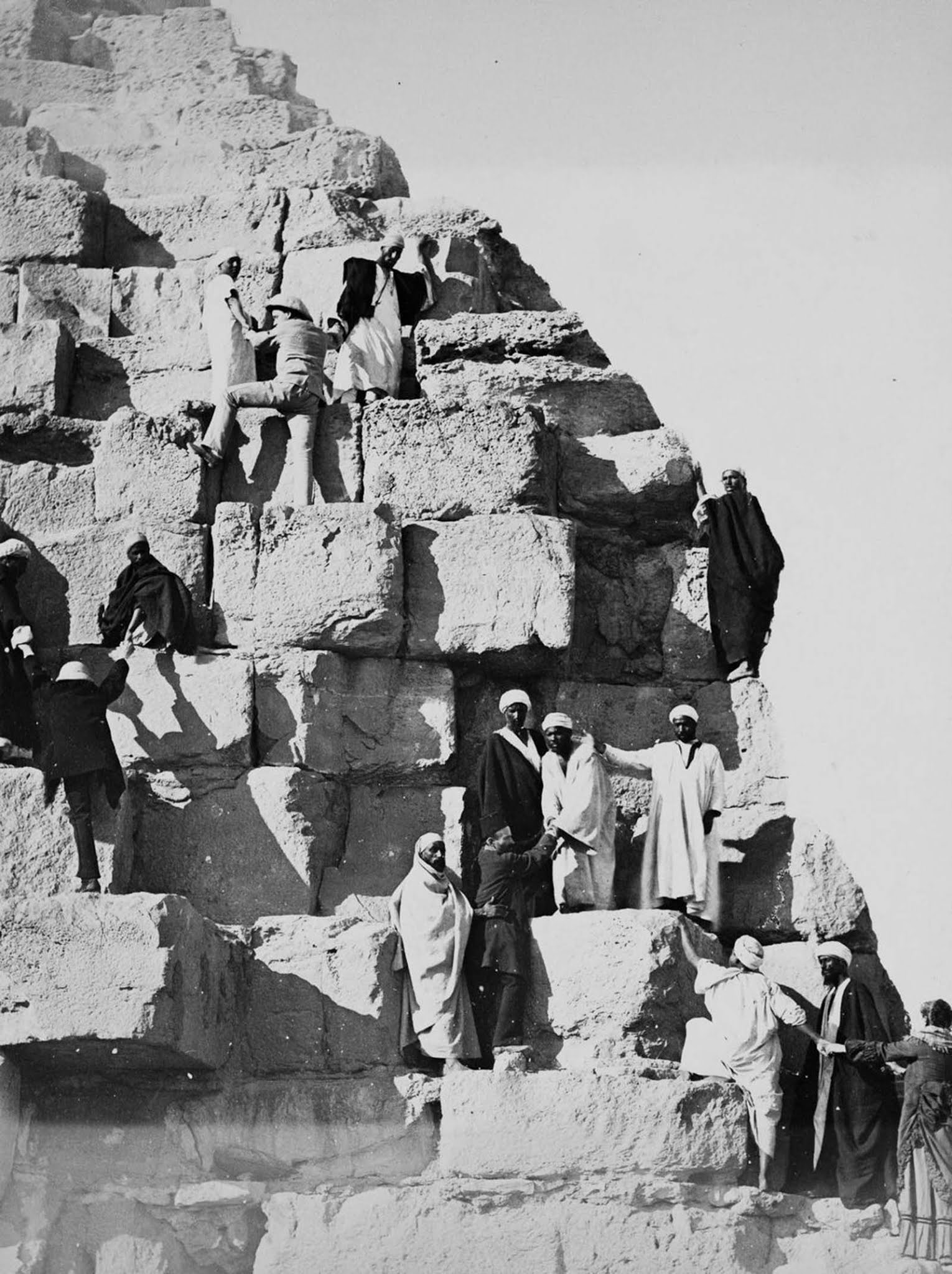 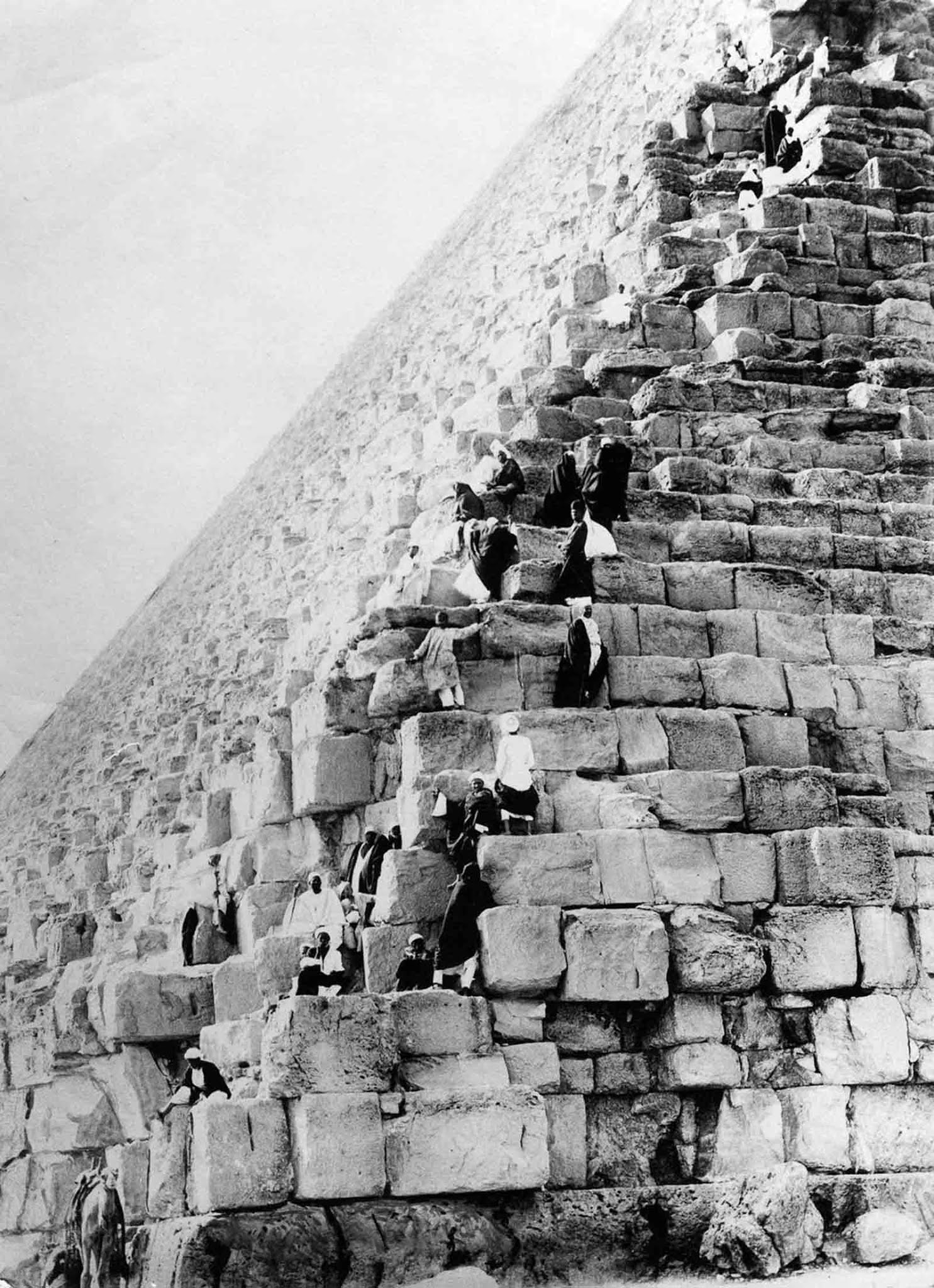 The smooth white limestone which had once encased the pyramid had long since been torn off for use in buildings in Cairo, leaving the massive structural blocks for tourists and local guides to clamber over. 1930. 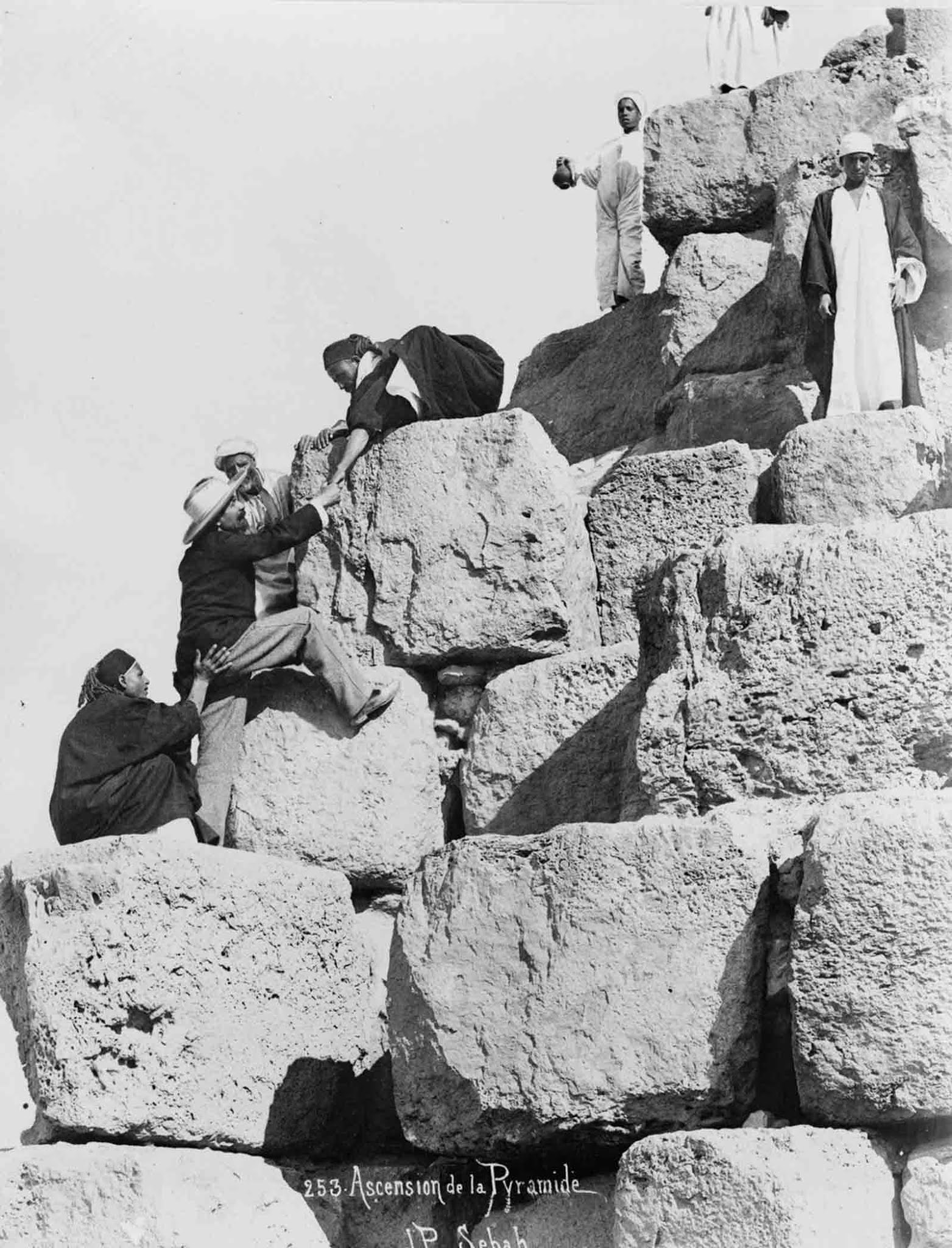 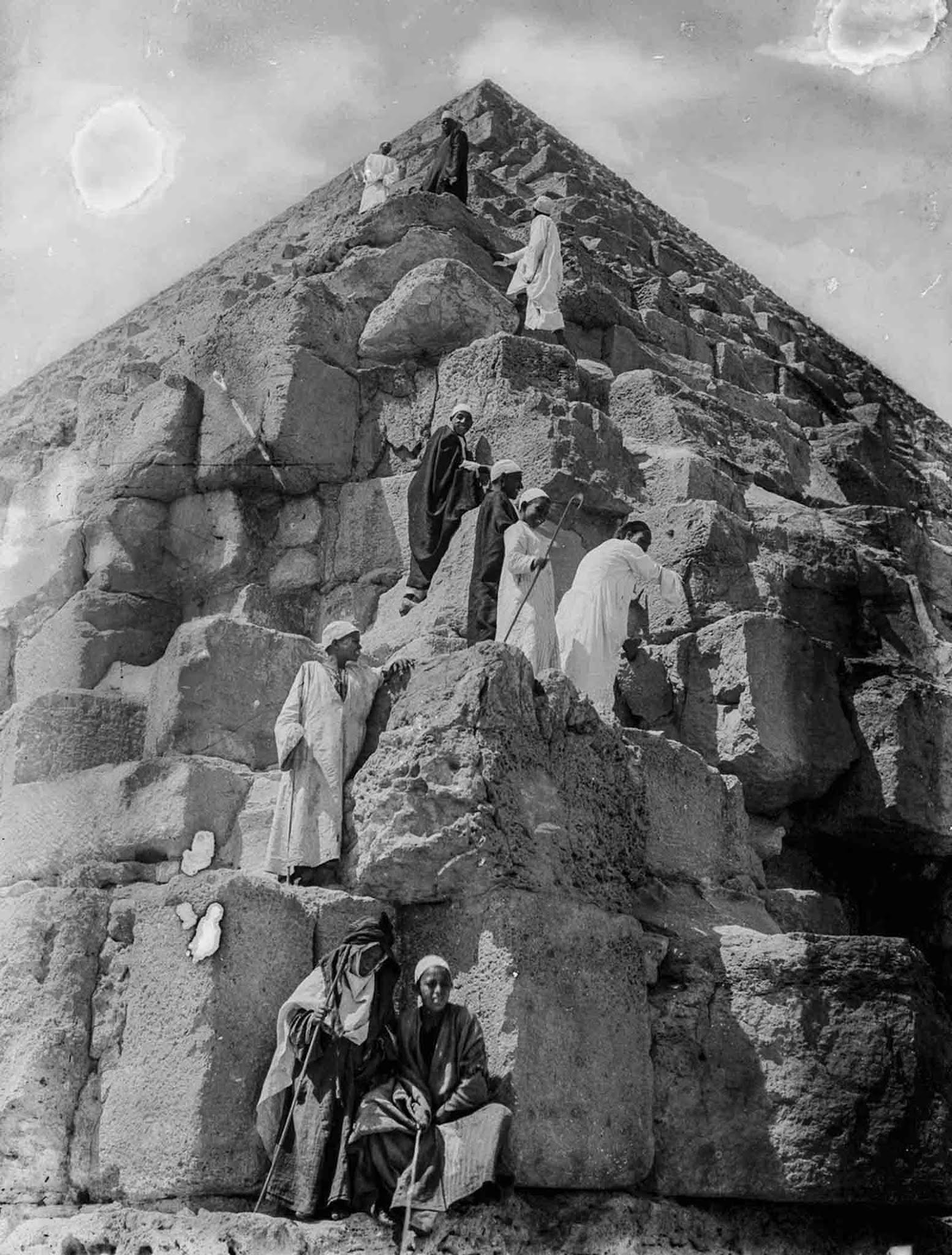 With the completion of the Suez Canal in 1869, visits by wealthy tourists increased. 1900. 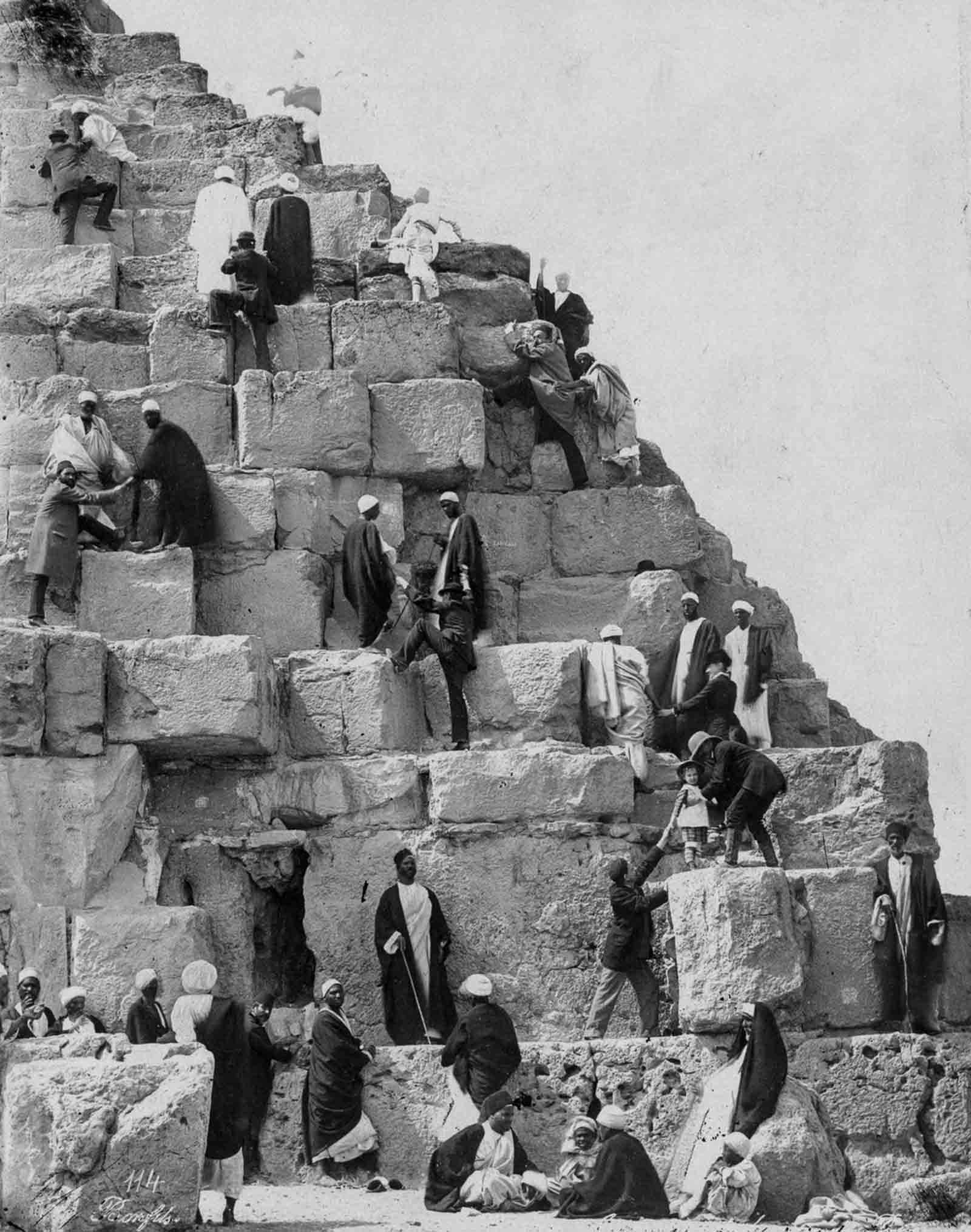 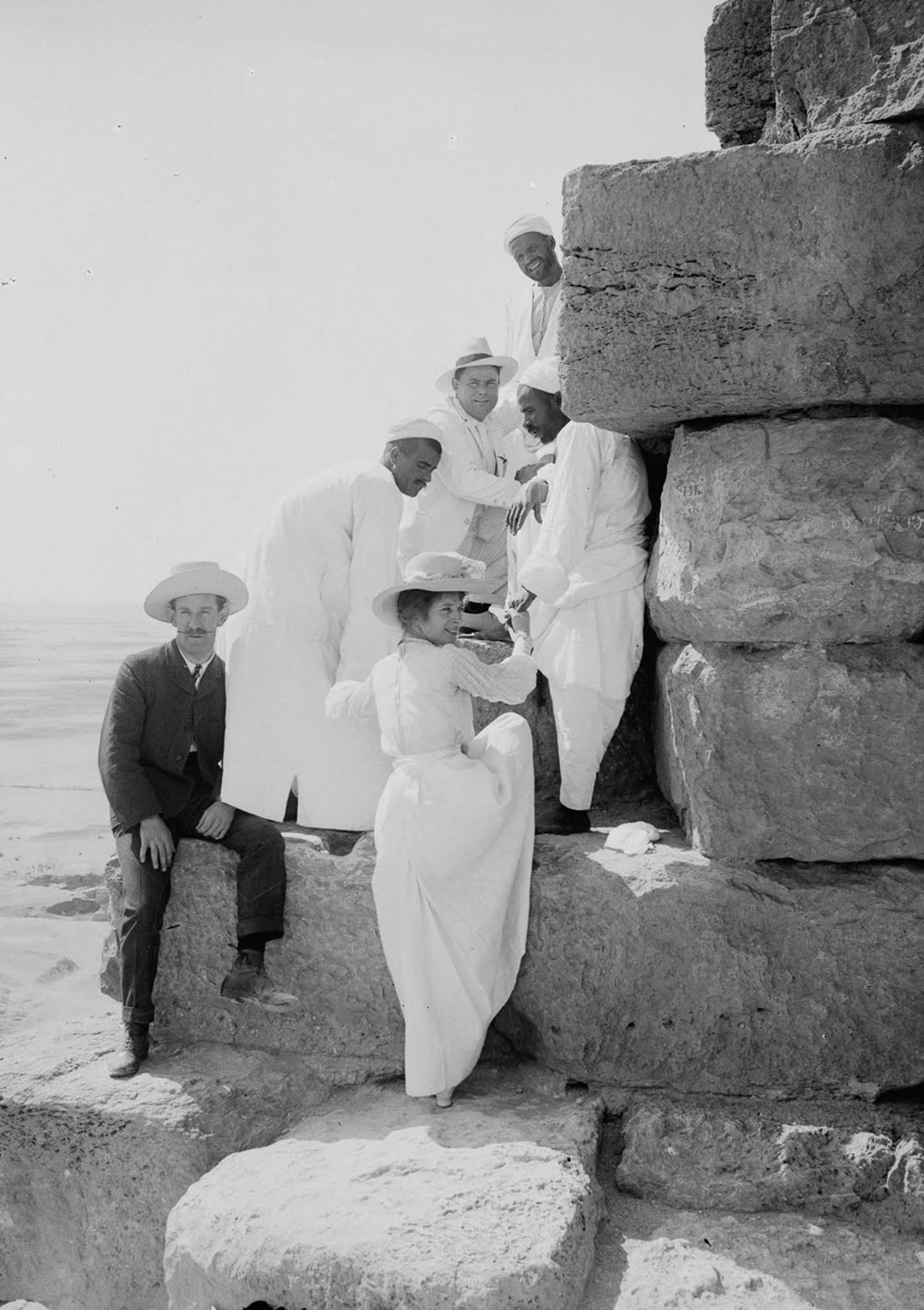 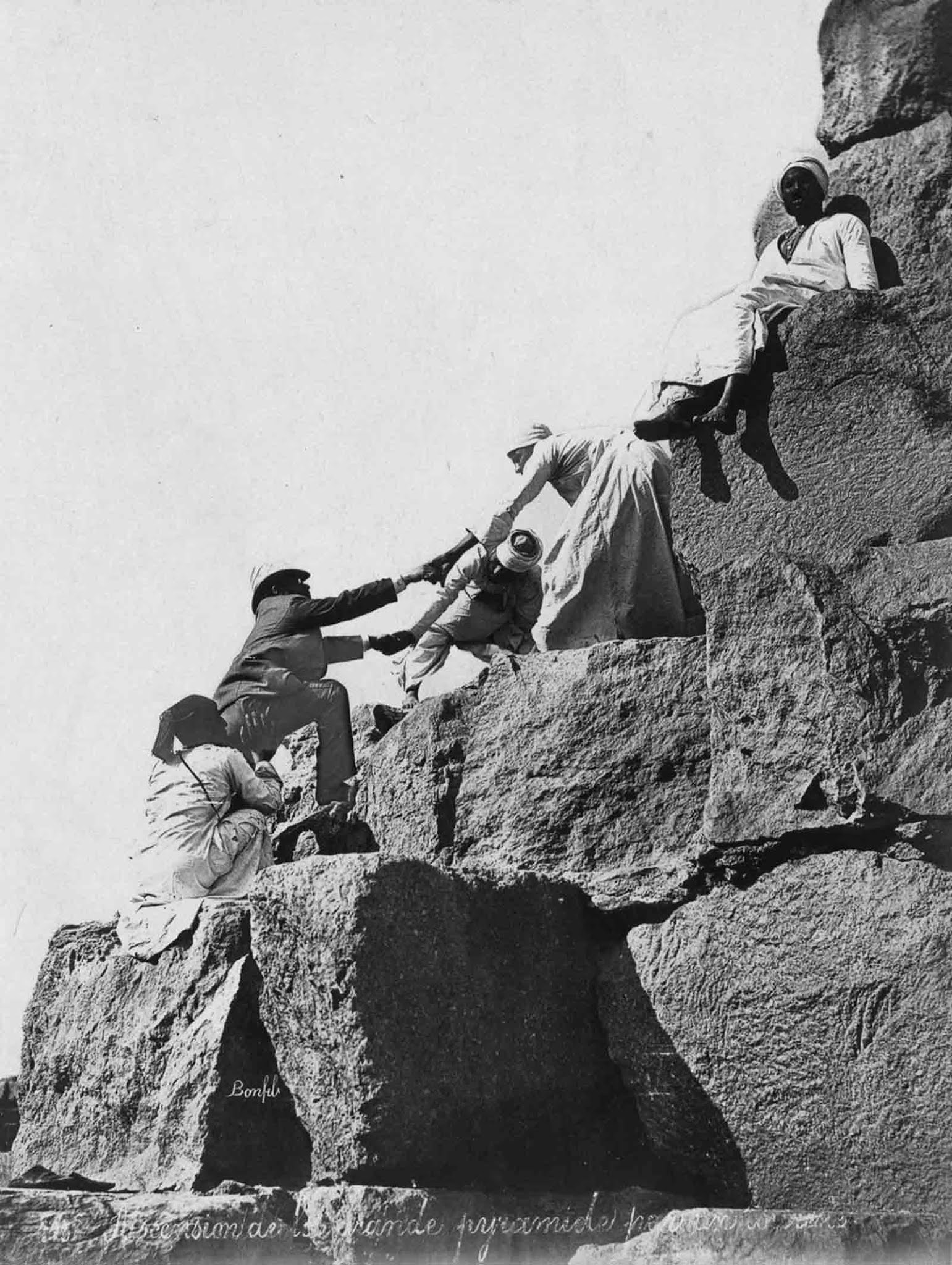 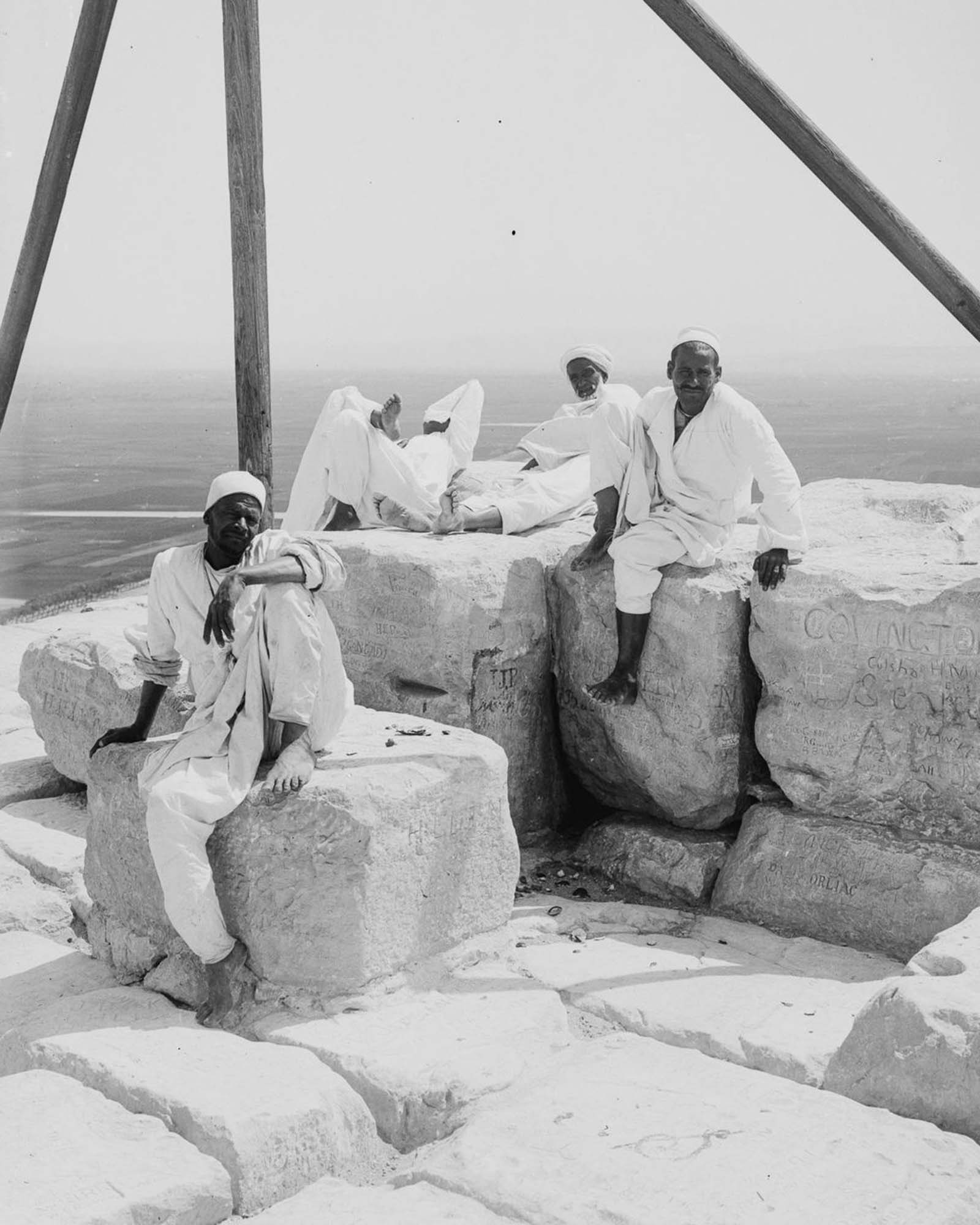 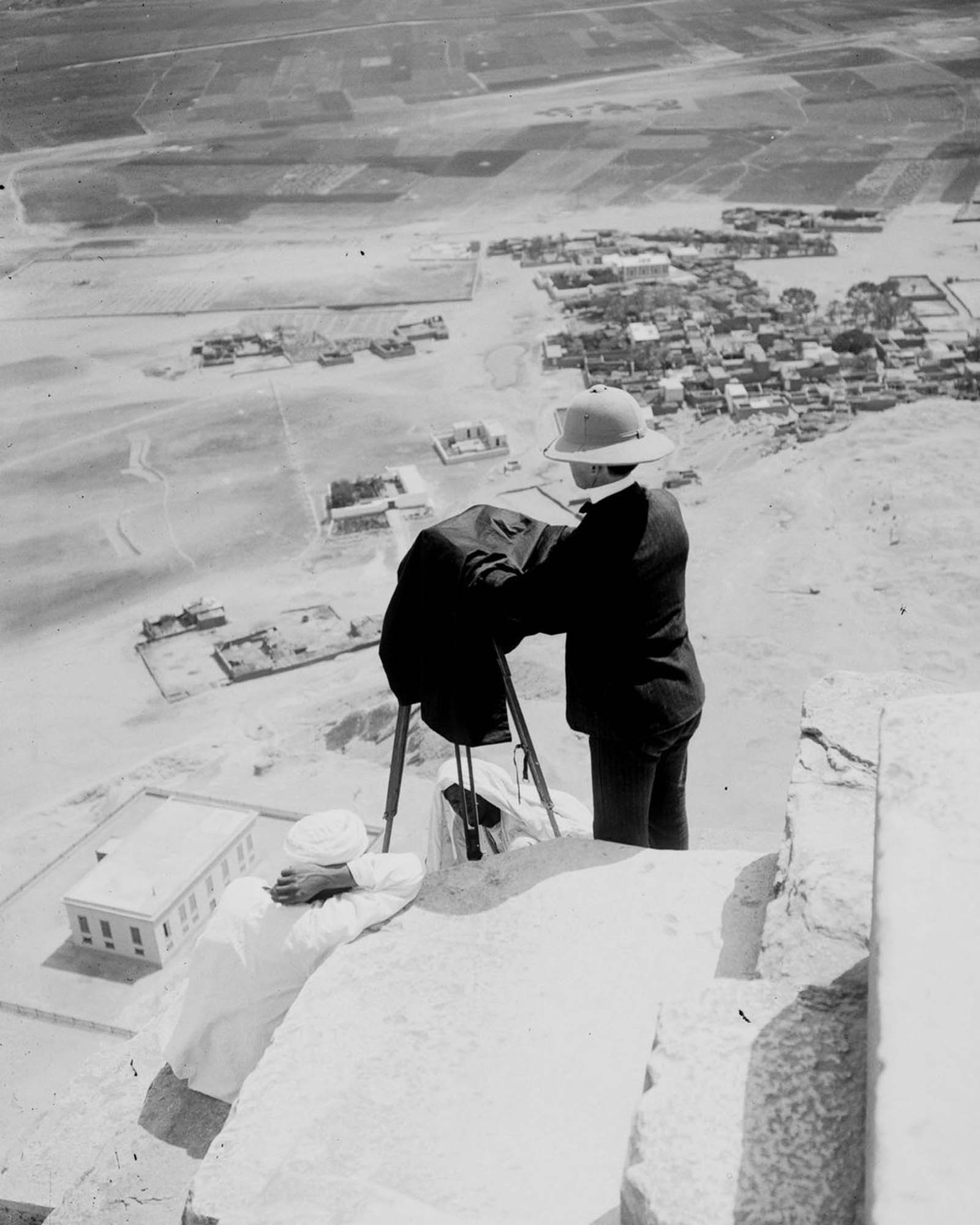 Photographer Lewis Larsson composes a photo from atop the Great Pyramid. 1900. 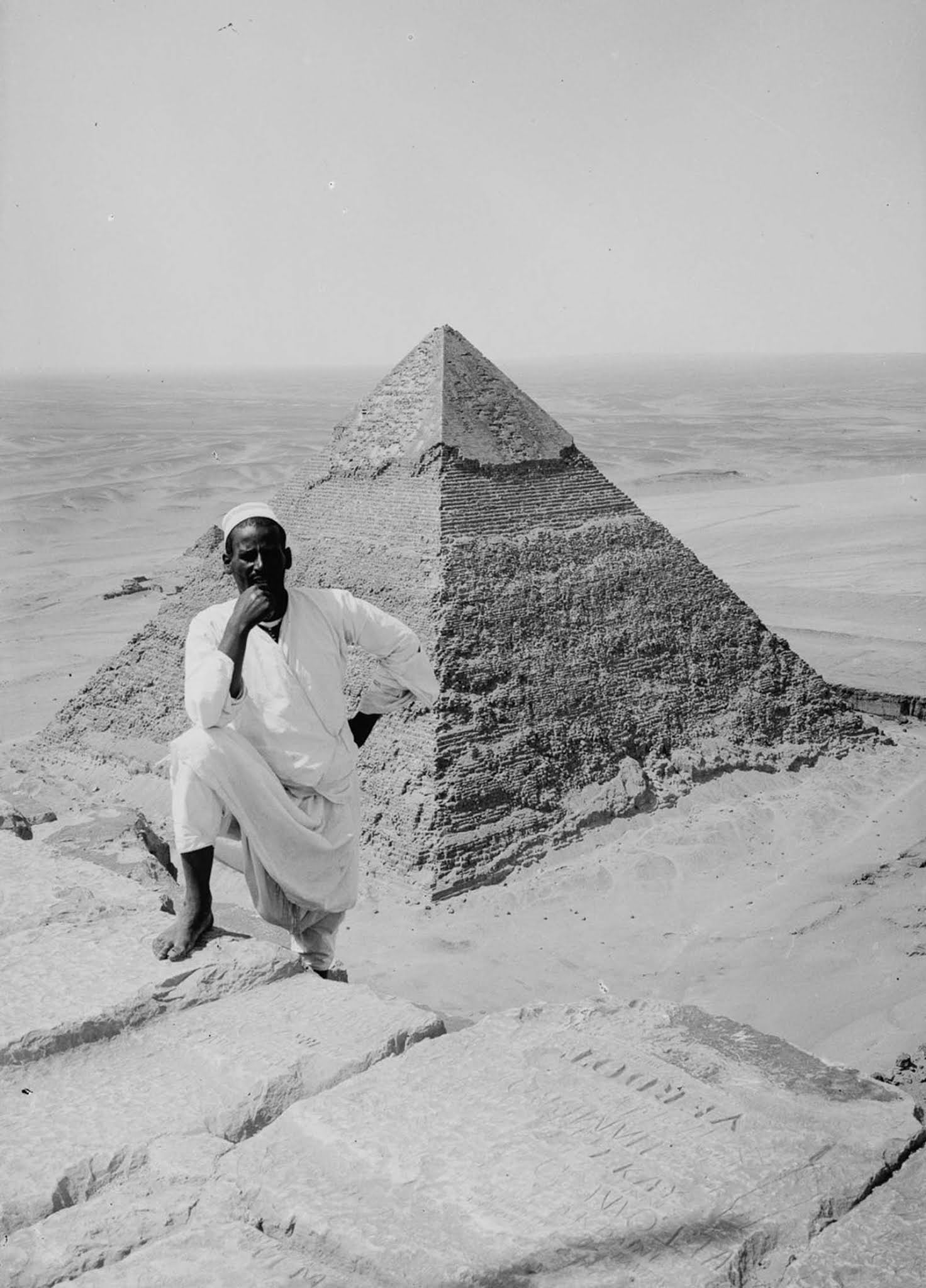 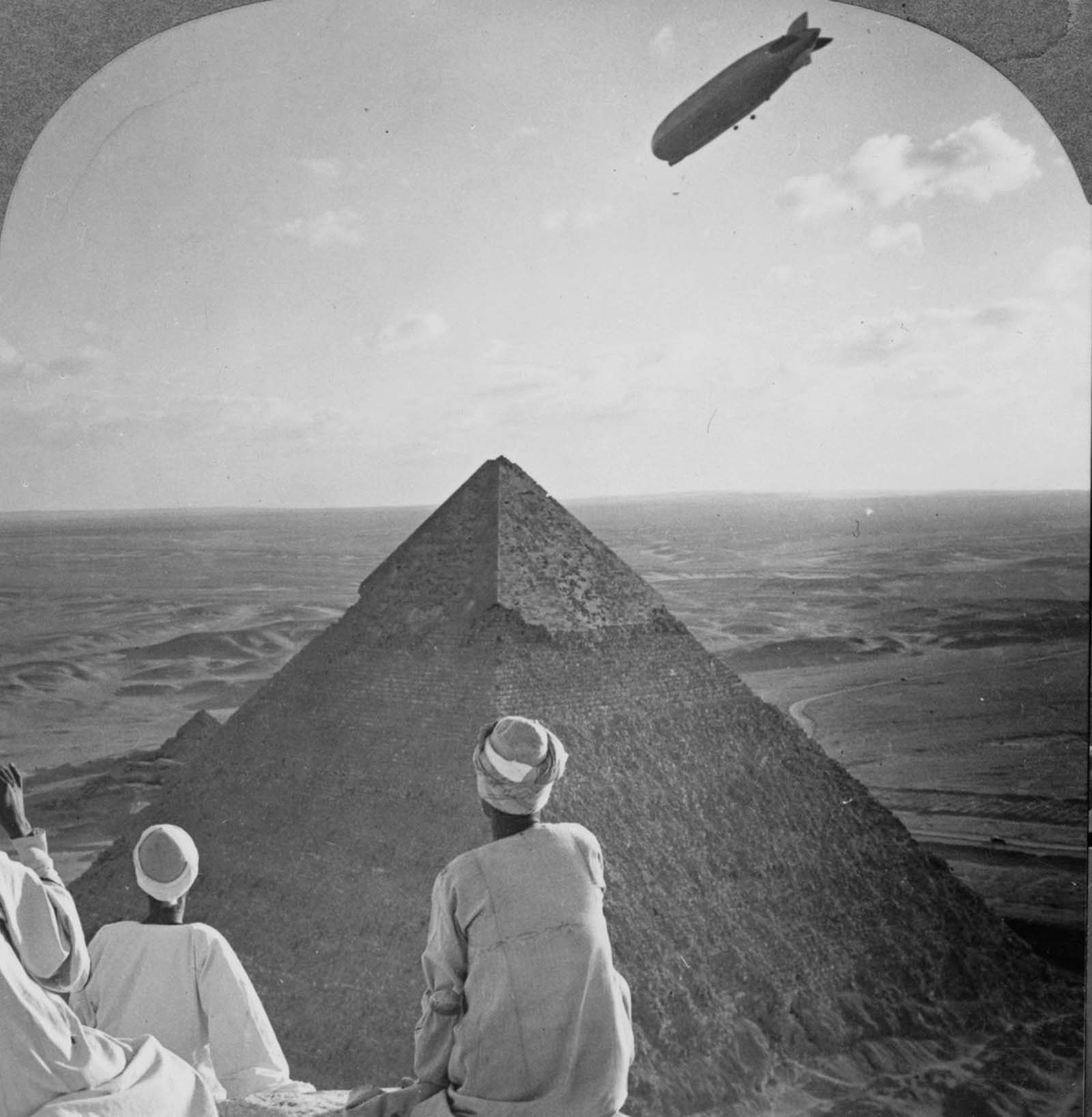 Egyptian men watch as the Graf Zeppelin floats over the pyramids of Giza. 1931. 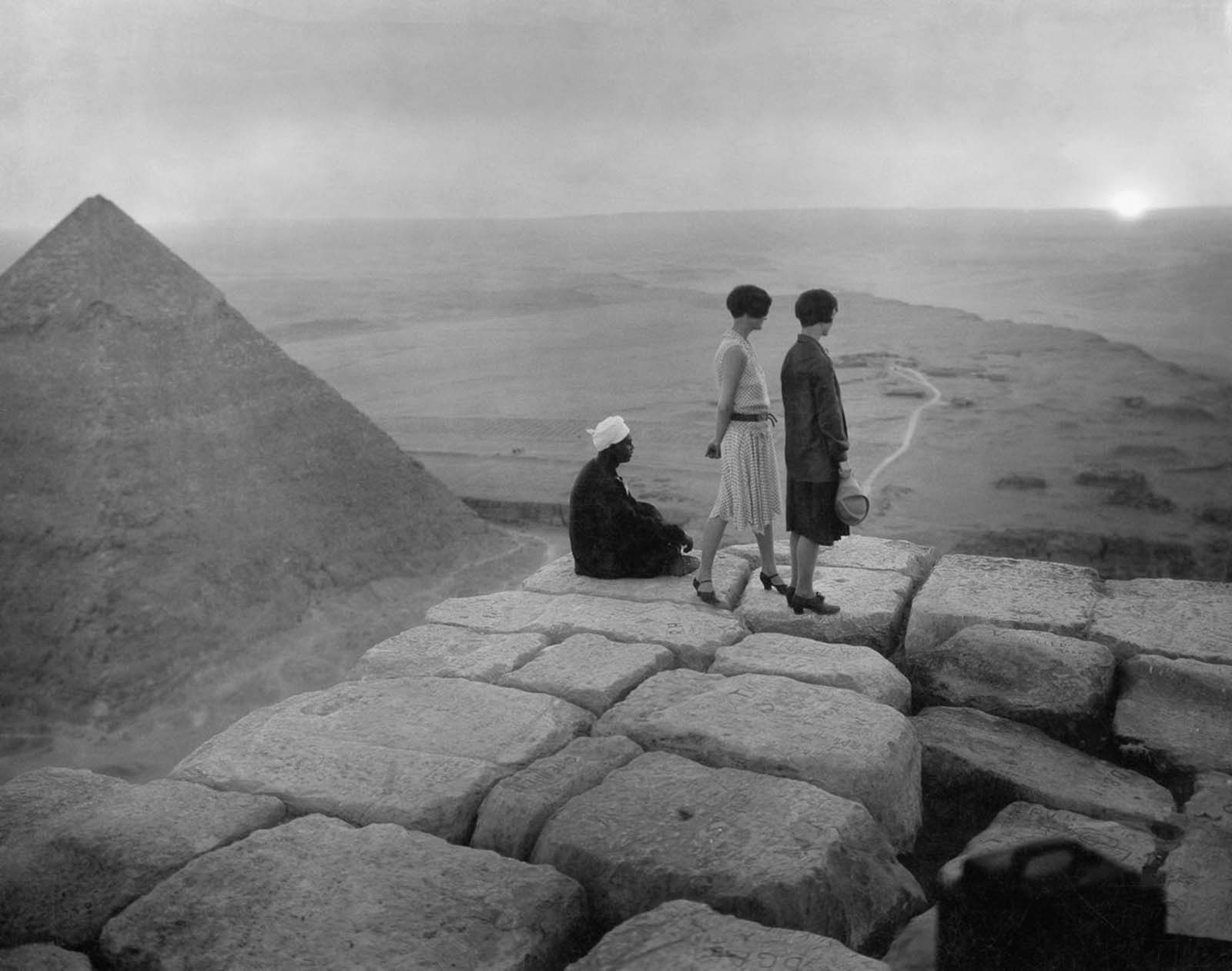 Two ladies and a local man watching the sunset. 1925.