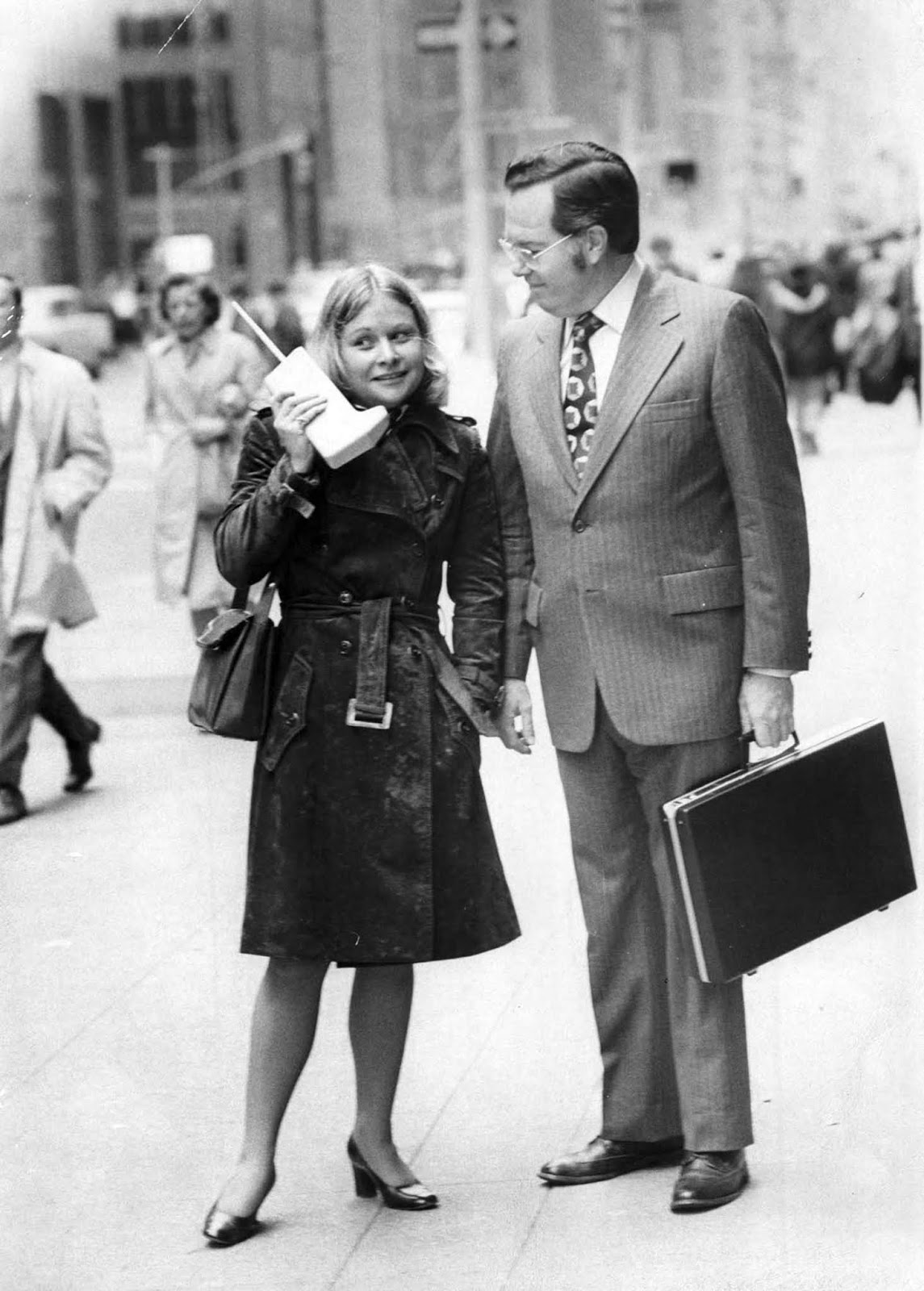 Jeanne Bauer walks with a DynaTAC on 6th Avenue in New York, accompanied by John Mitchell, the Motorola engineer behind the phone. 1973.

The history of proto mobile phones goes back to 1908 when a US Patent was issued in Kentucky for a wireless telephone. Mobile phones were invented as early as the 1940s when engineers working at AT&T developed cells for mobile phone base stations.

The very first mobile phones were not really mobile phones at all. They were two-way radios that allowed people like taxi drivers and emergency services to communicate.

All that changed on April 3rd of 1973, when Martin Cooper, a Motorola executive, made the first handheld cell phone call. The guy he rang was his rival at Bell Labs.

Cooper’s phone weighed in at just below 2.5 lbs (1.1 kg). Its battery allowed a half-hour of use, and then, 10 hours of recharging later, it would be ready for a chat again.

These early mobile phones are often referred to as 0G mobile phones, or Zero Generation mobile phones. It would be another six years before the launch of the first — 1G — cellular network, and then only in the center of Tokyo. By 1984, the network had expanded sufficiently to cover the whole of Japan. 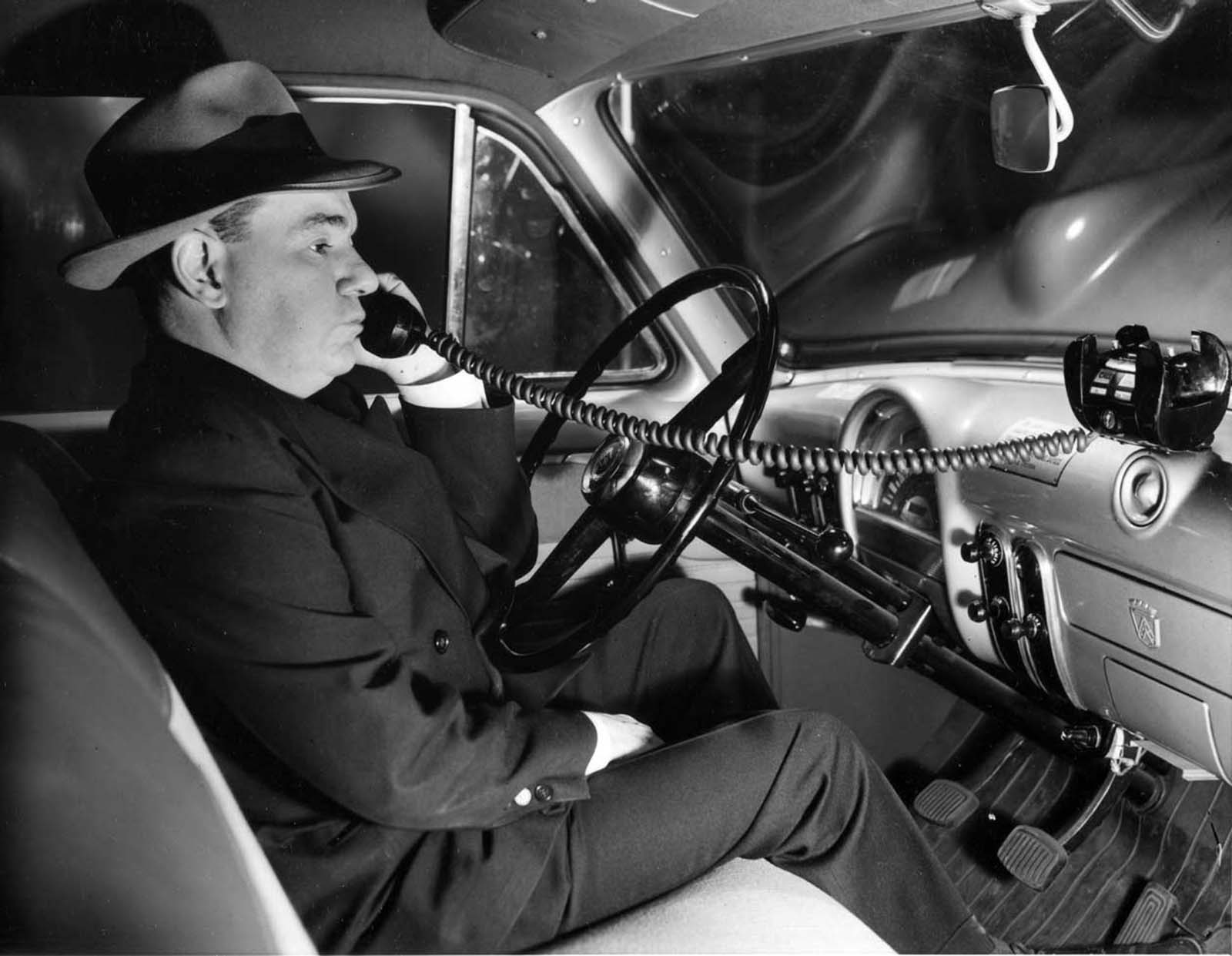 A man using a mobile telephone in an automobile. 1954.

In 1983 Motorola launched DynaTAC 800x, developed at a cost of $100 million. It was priced at around $4,000 and lasted for 30 minutes of talk time before dying. It looked like a brick, and brick is what people called it.

Despite the phone’s large size, it was still considered to be the most portable telephone ever made. For the first time in history, a human being could call someone without the constraints of wires or portable phone holders.

It wasn’t until the 1990’s that developers started to release the second generation of mobile phones. In 1992 the IBM Simon was released, this phone is considered the first-ever smartphone.

The phone acted more as a planner with the added ability to make phone calls. You could create task lists and store contacts, but that was all that Simon could handle.

This handheld device retailed at around $900 and sold close to 50,000 units. Simon essentially paved the way for many smartphones to come. 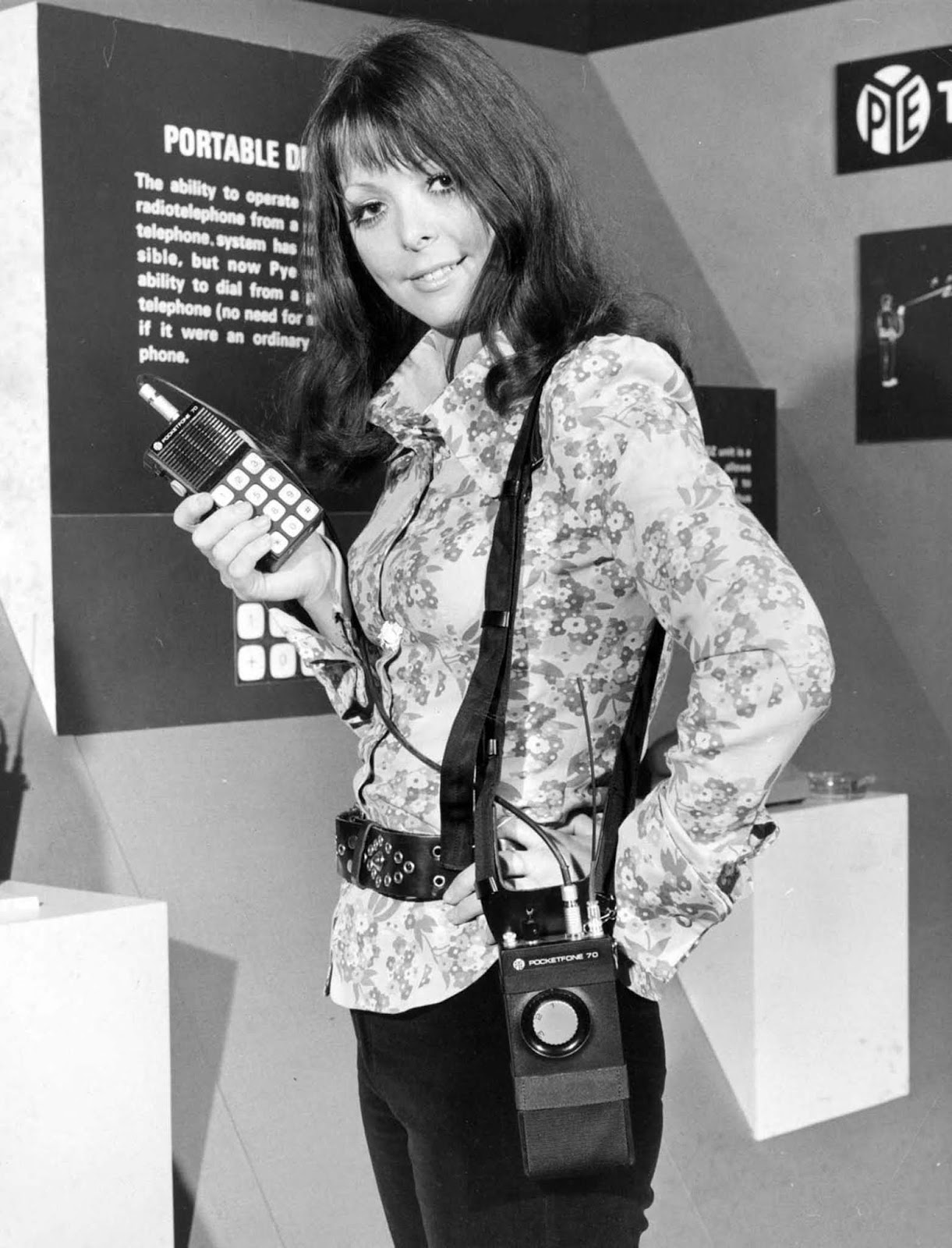 The portable radio-telephone was a precursor to the mobile phone. It worked by dialing into telephone systems. Here, a model displays a set at the “Communications Today, Tomorrow and the Future” exhibition at the Royal Lancaster Hotel, London. 1973. 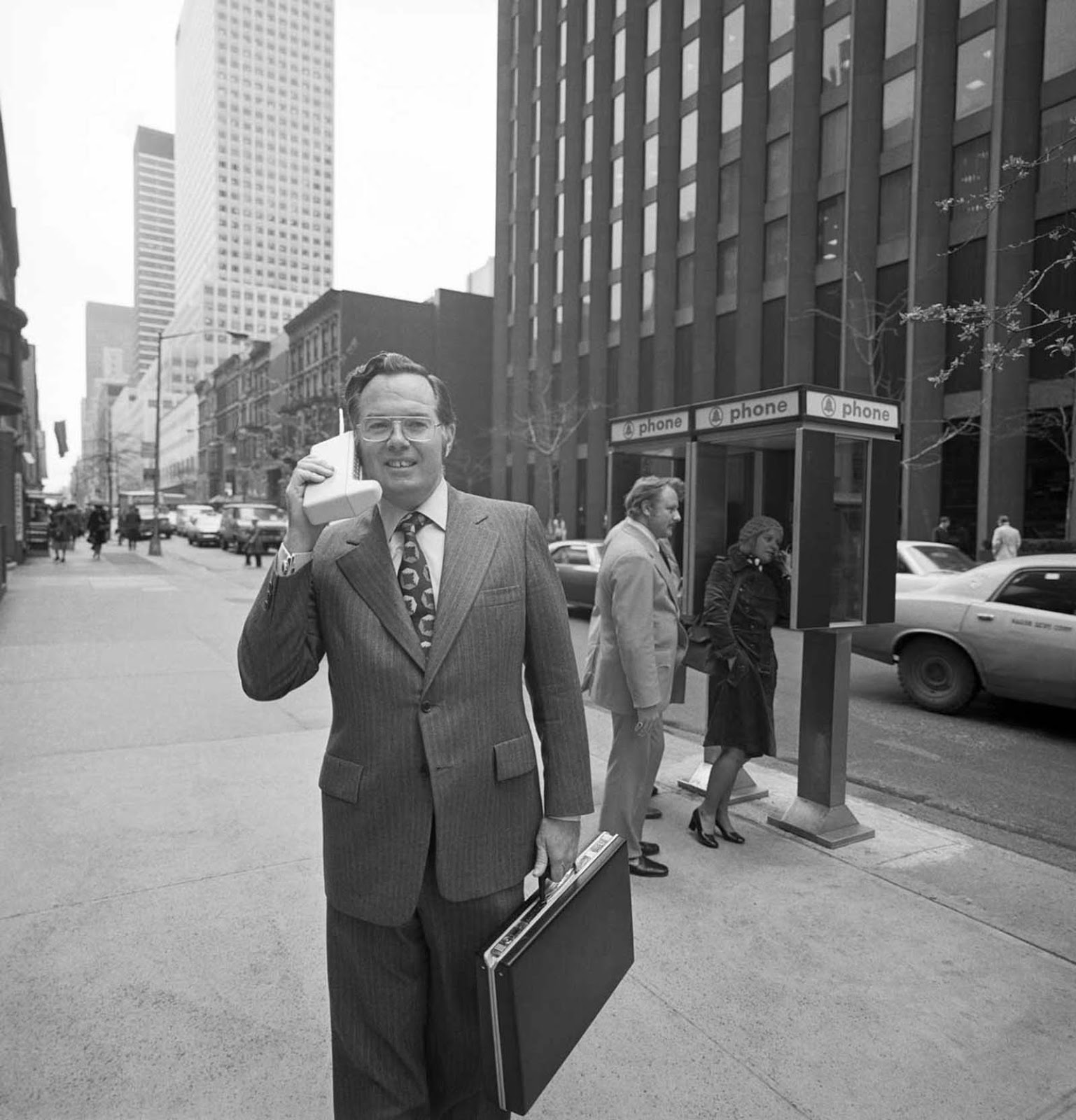 John Mitchell with his phone on the streets of New York. He helped develop the design for the first mobile phone. 1973. 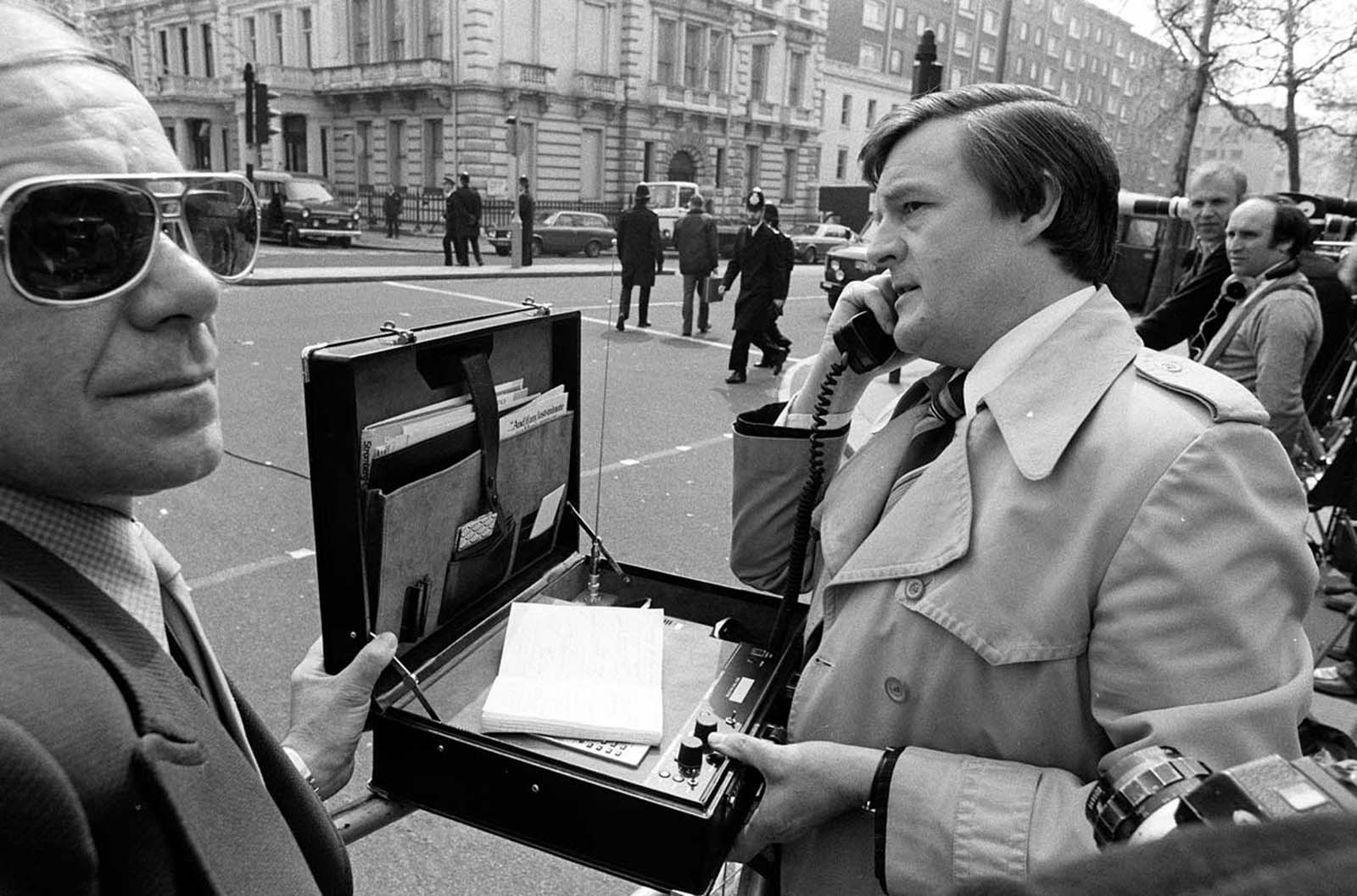 An early mobile phone used by a reporter, Kensington, London. 1983. 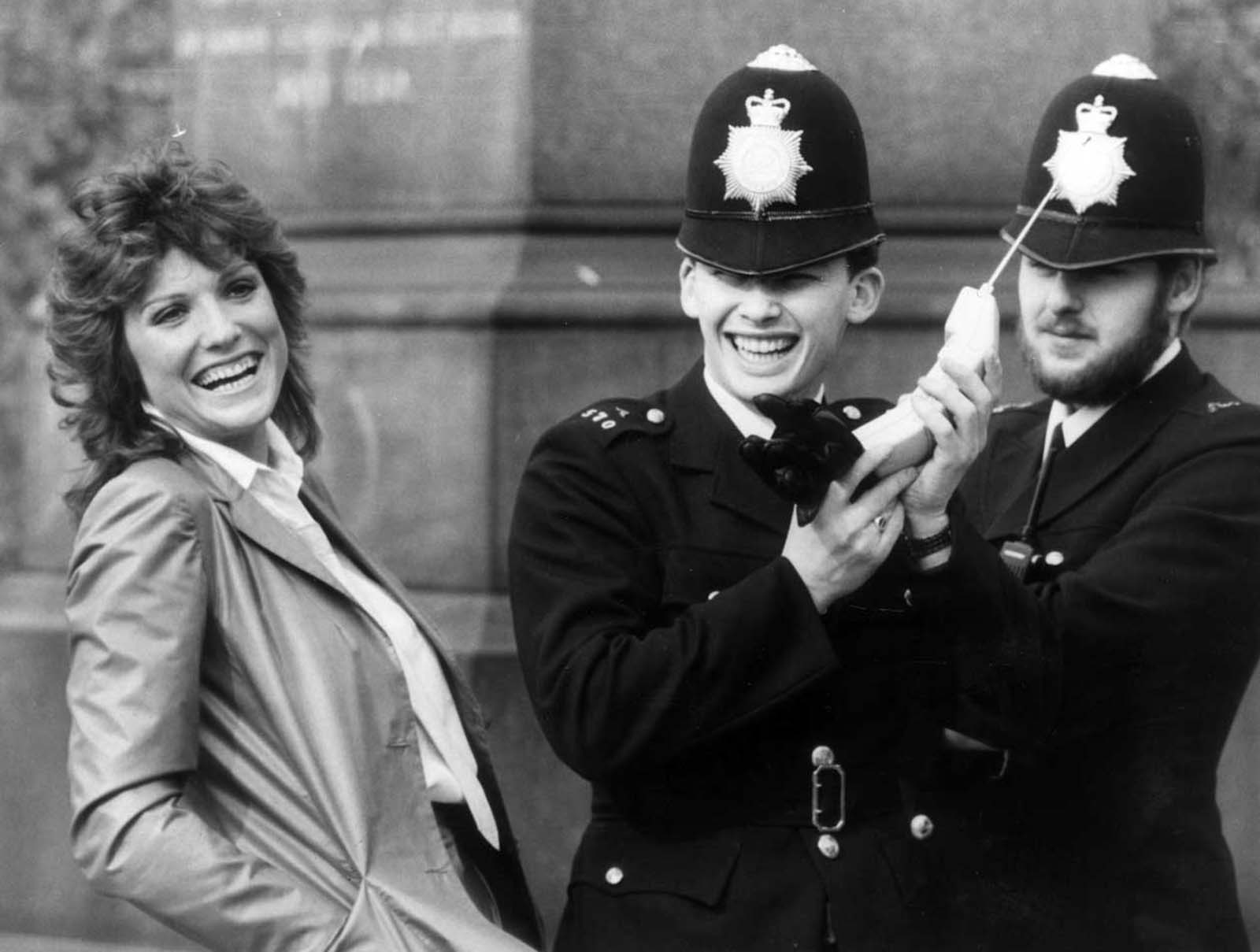 British actress Suzanne Danielle sharing a joke with two policemen while they examine one of the then-newly legal mobile phones in the United Kingdom. 1983. 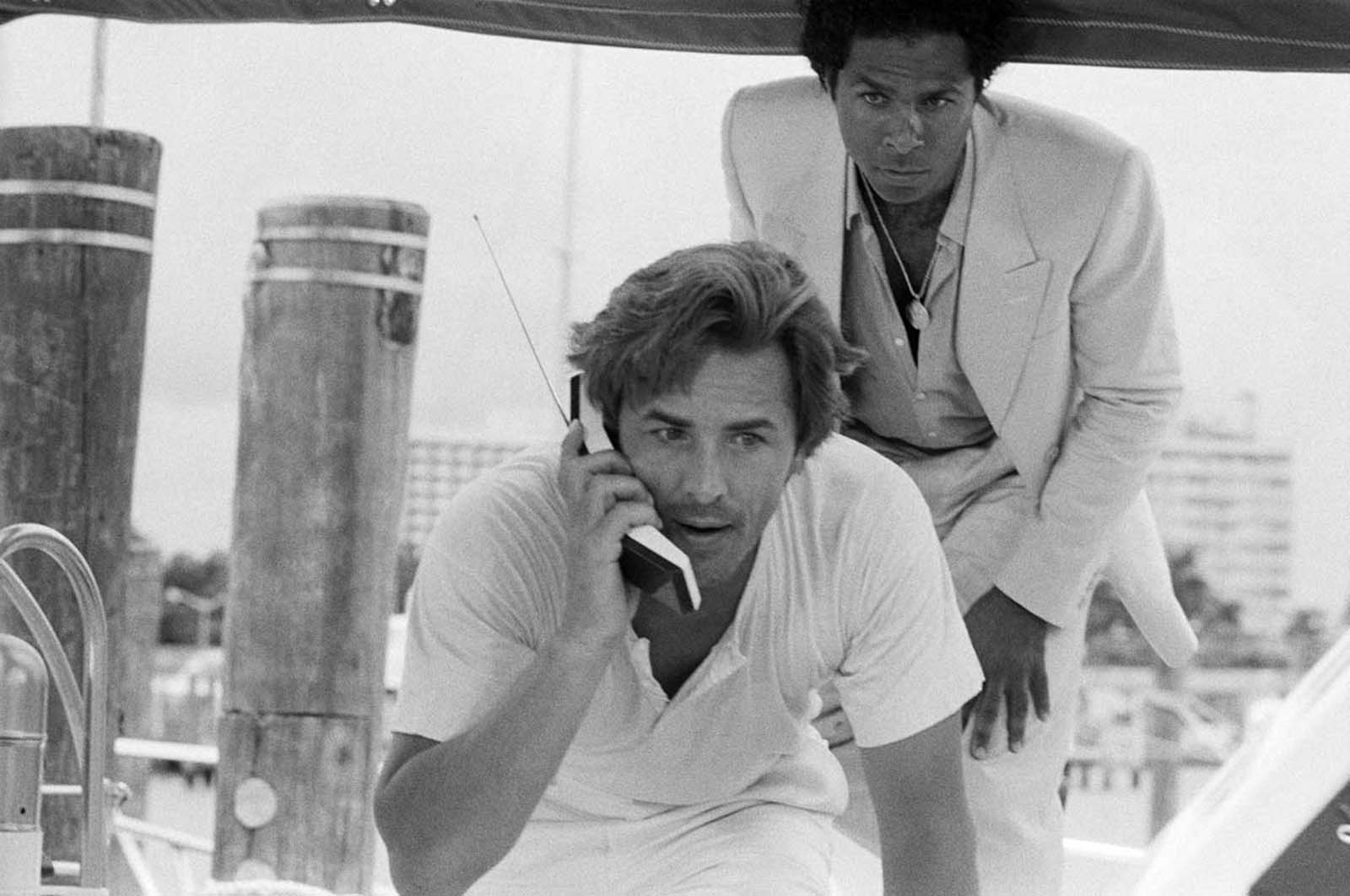 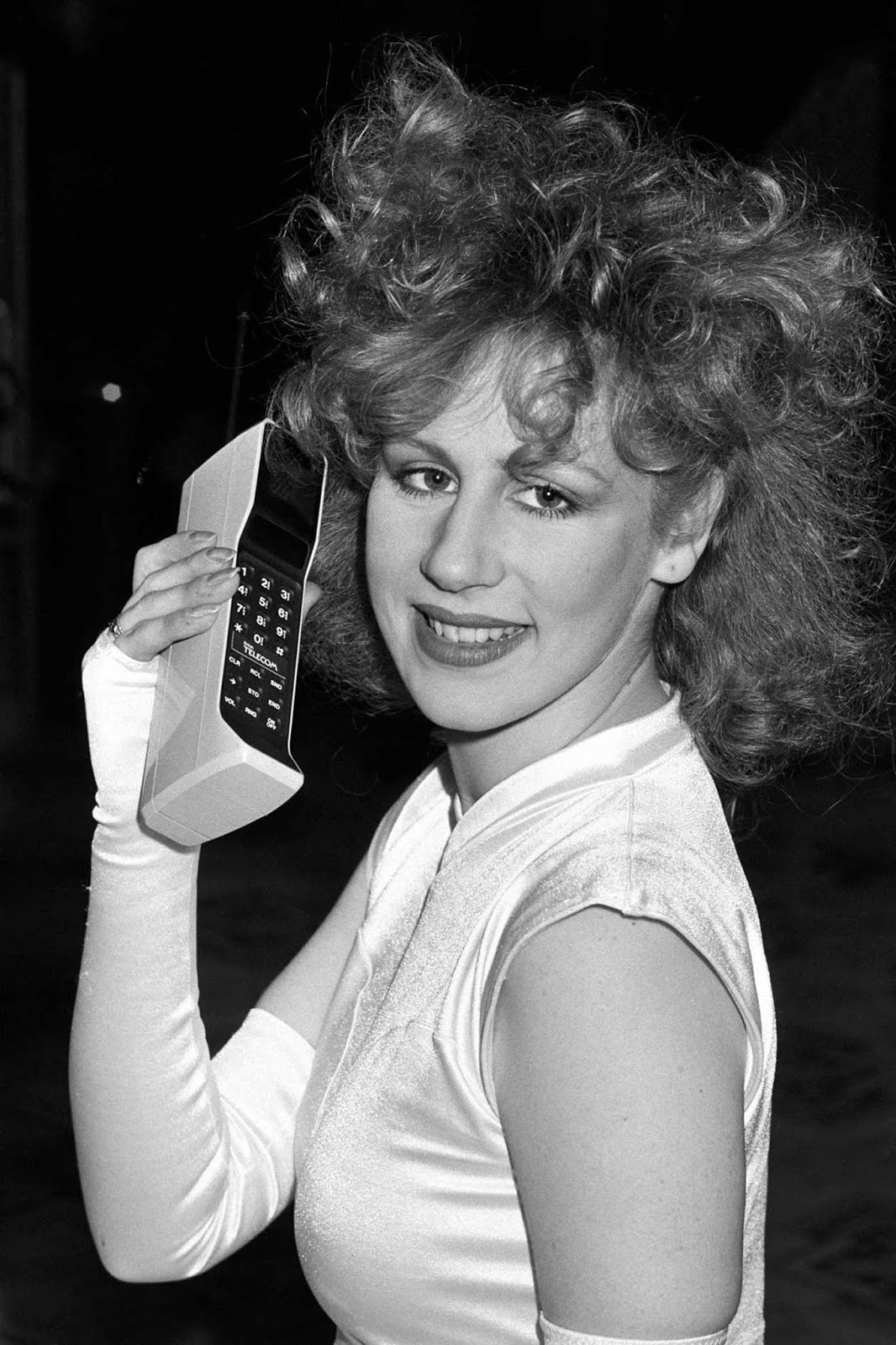 A model poses with a phone at the launch of the Cellnet cellular radio system mobile phone service in London. 1985. 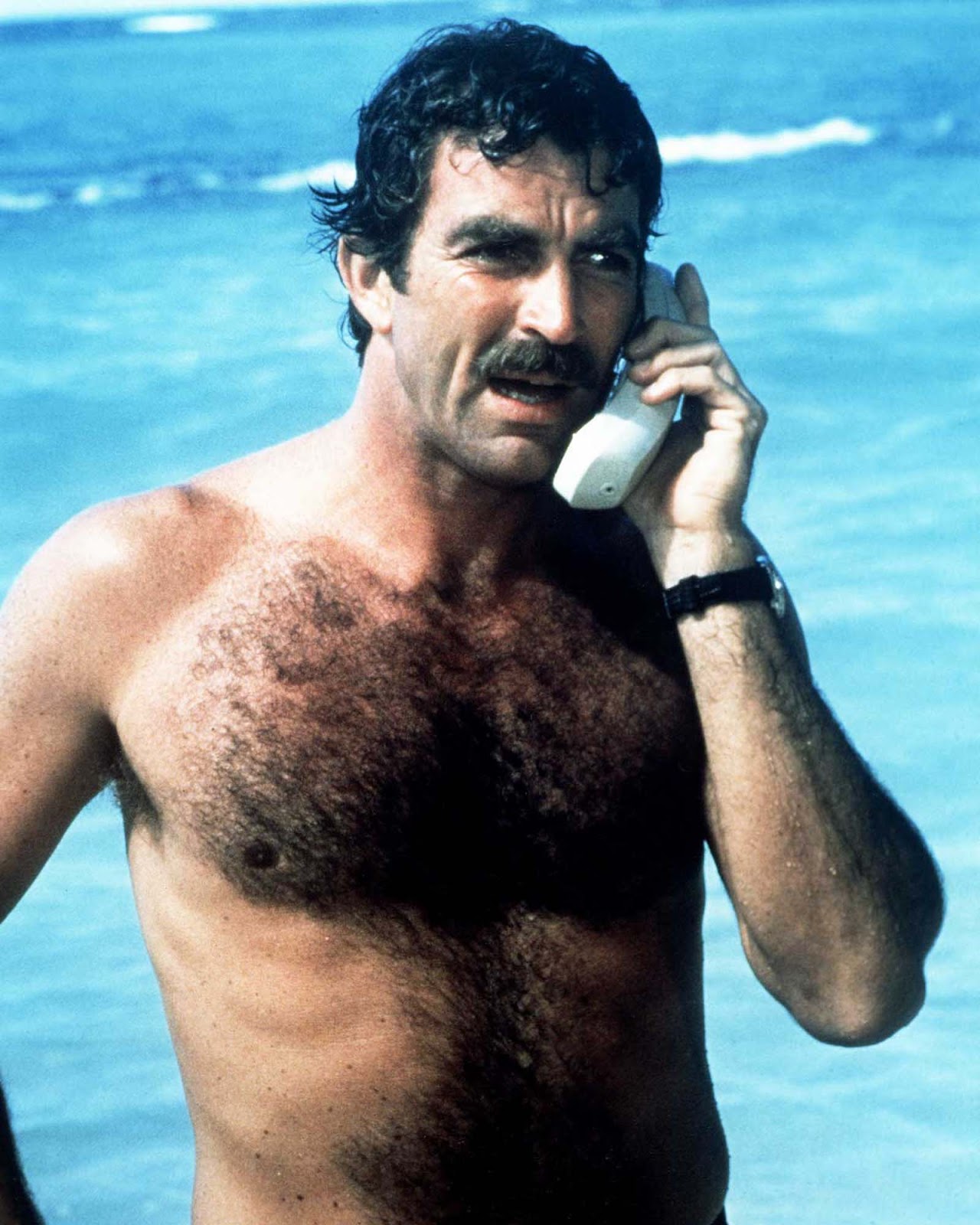 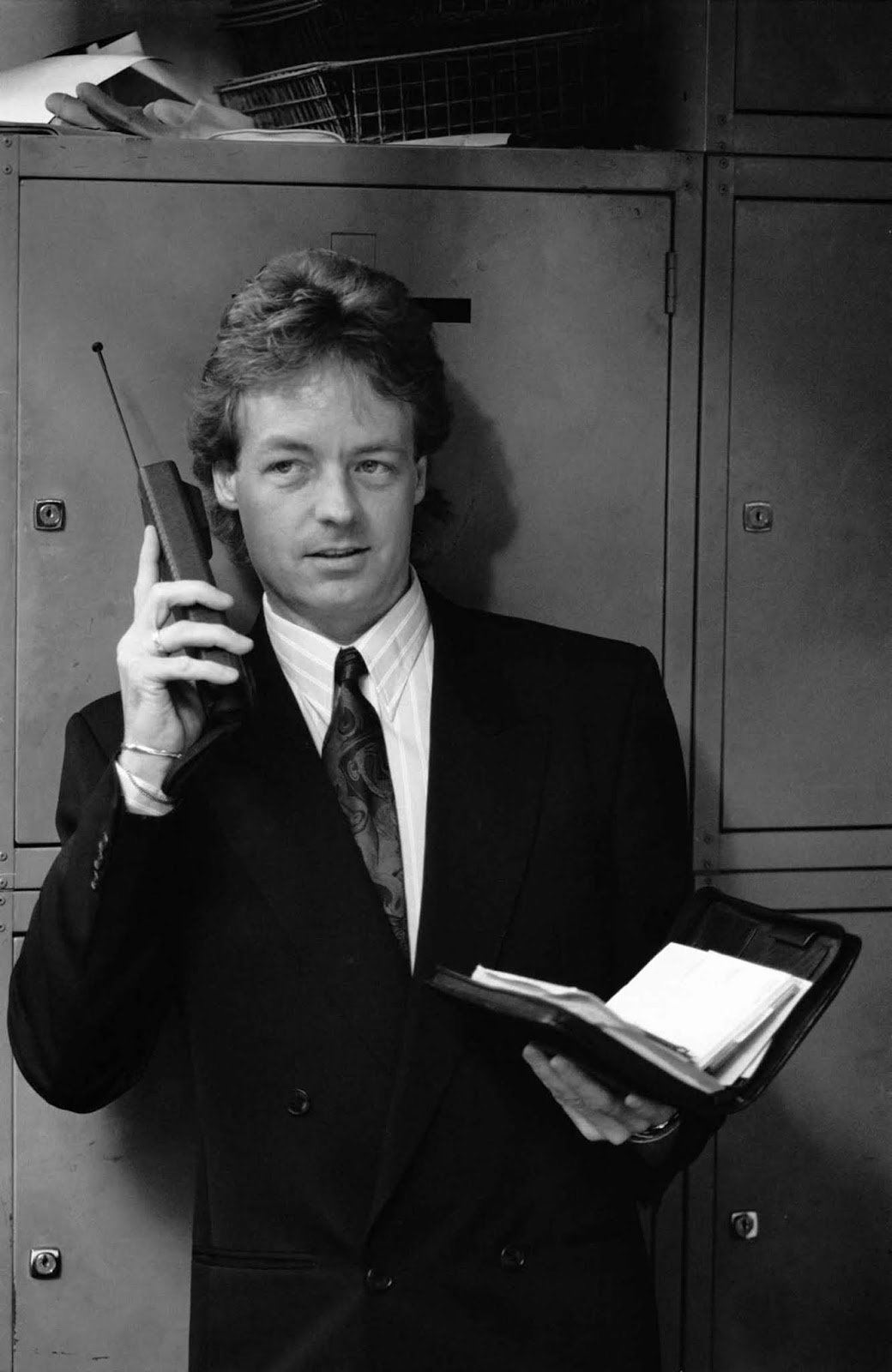 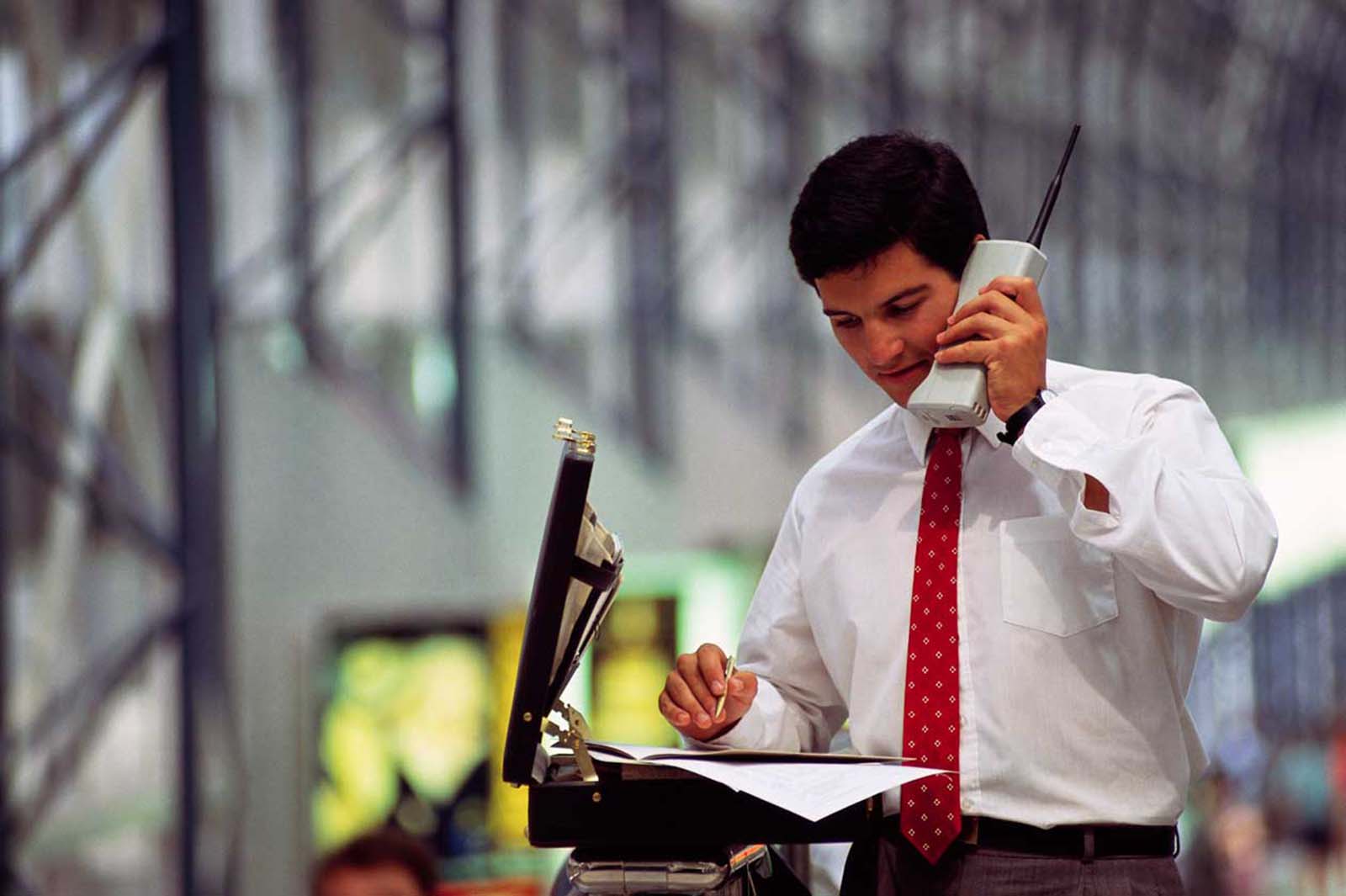 A young businessman with a brief case goes over figures on a giant old cell phone. 1990. 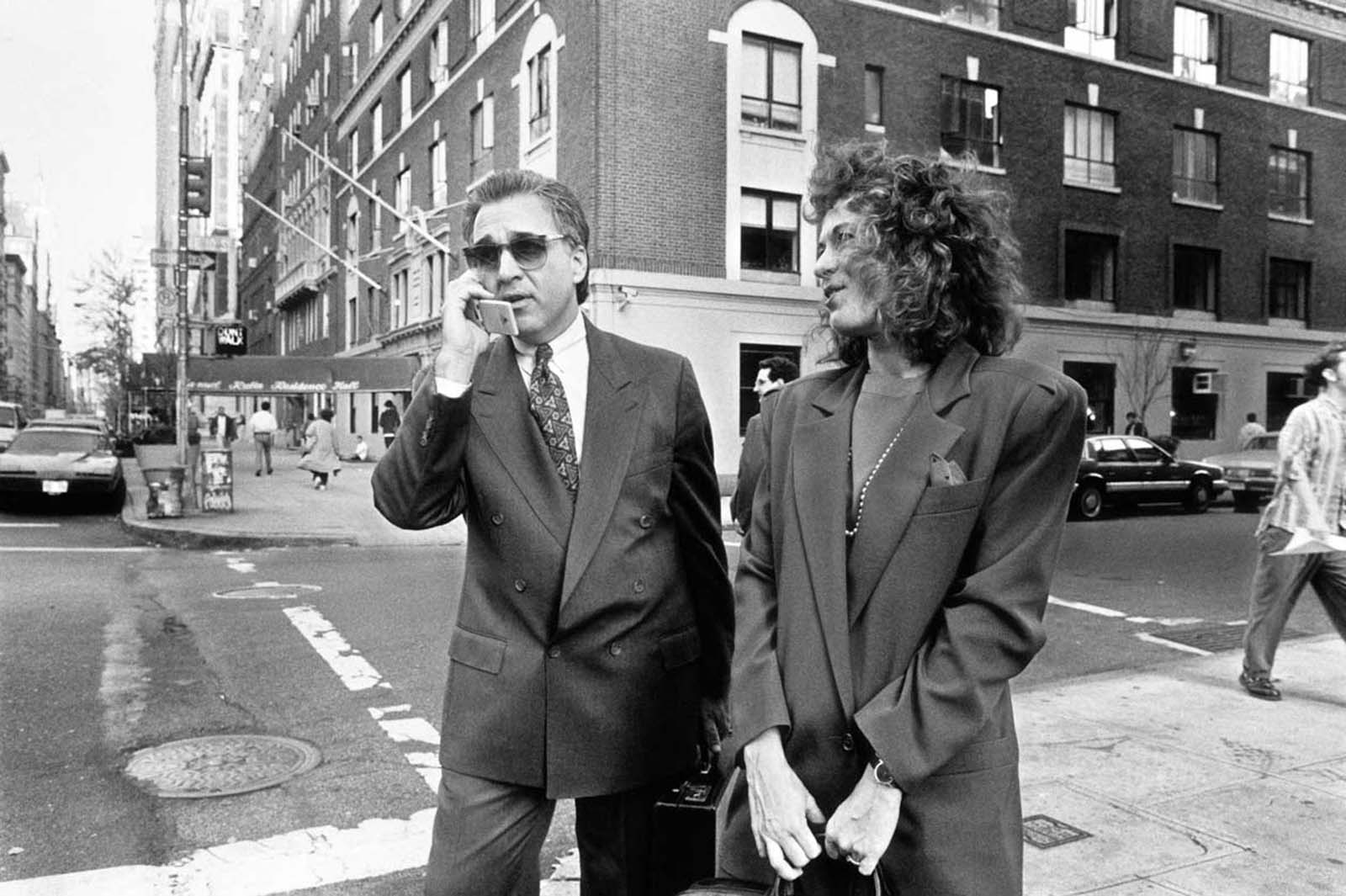 The phones were slimmer, if not still big, by the early ’90s. 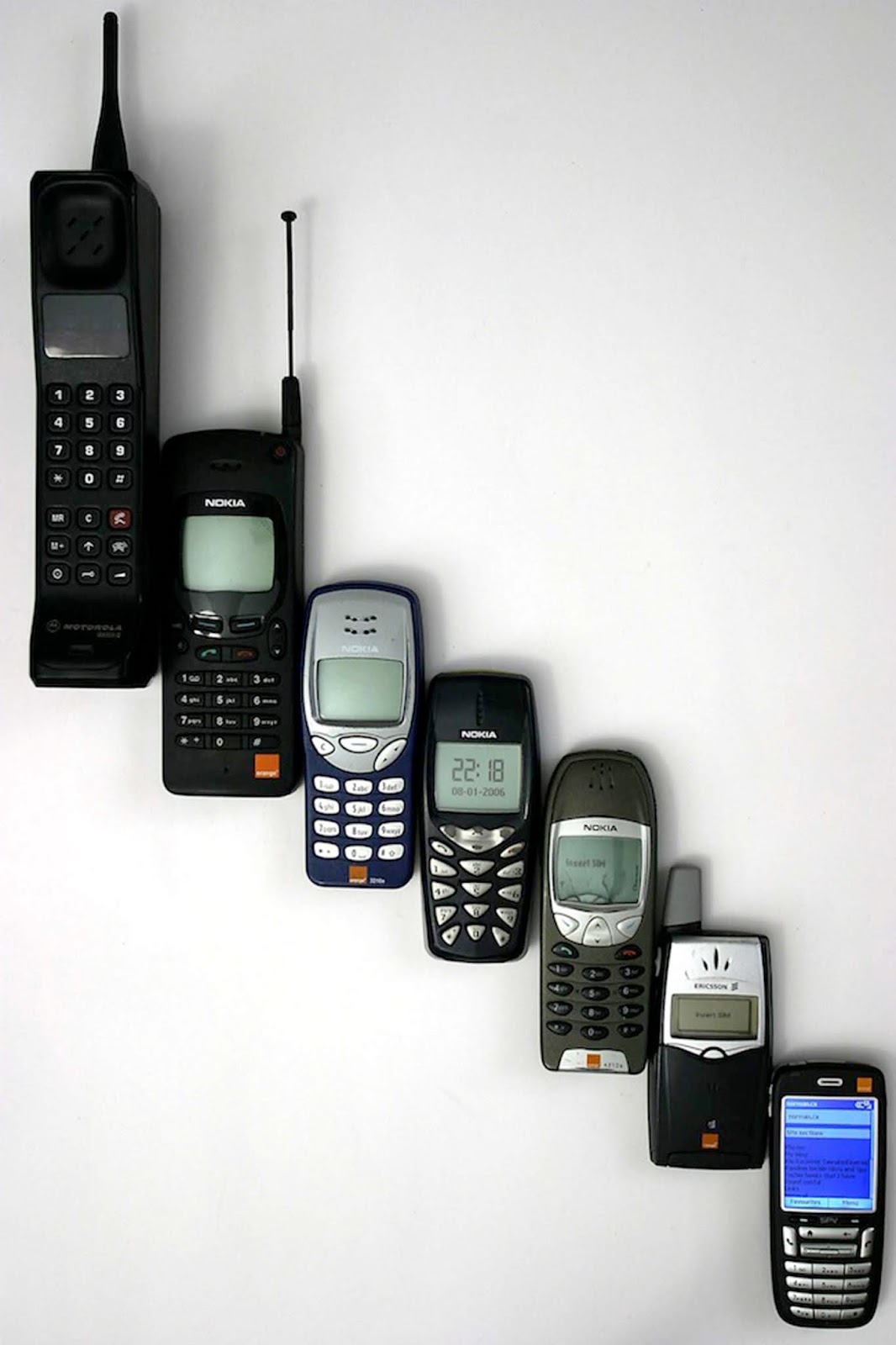