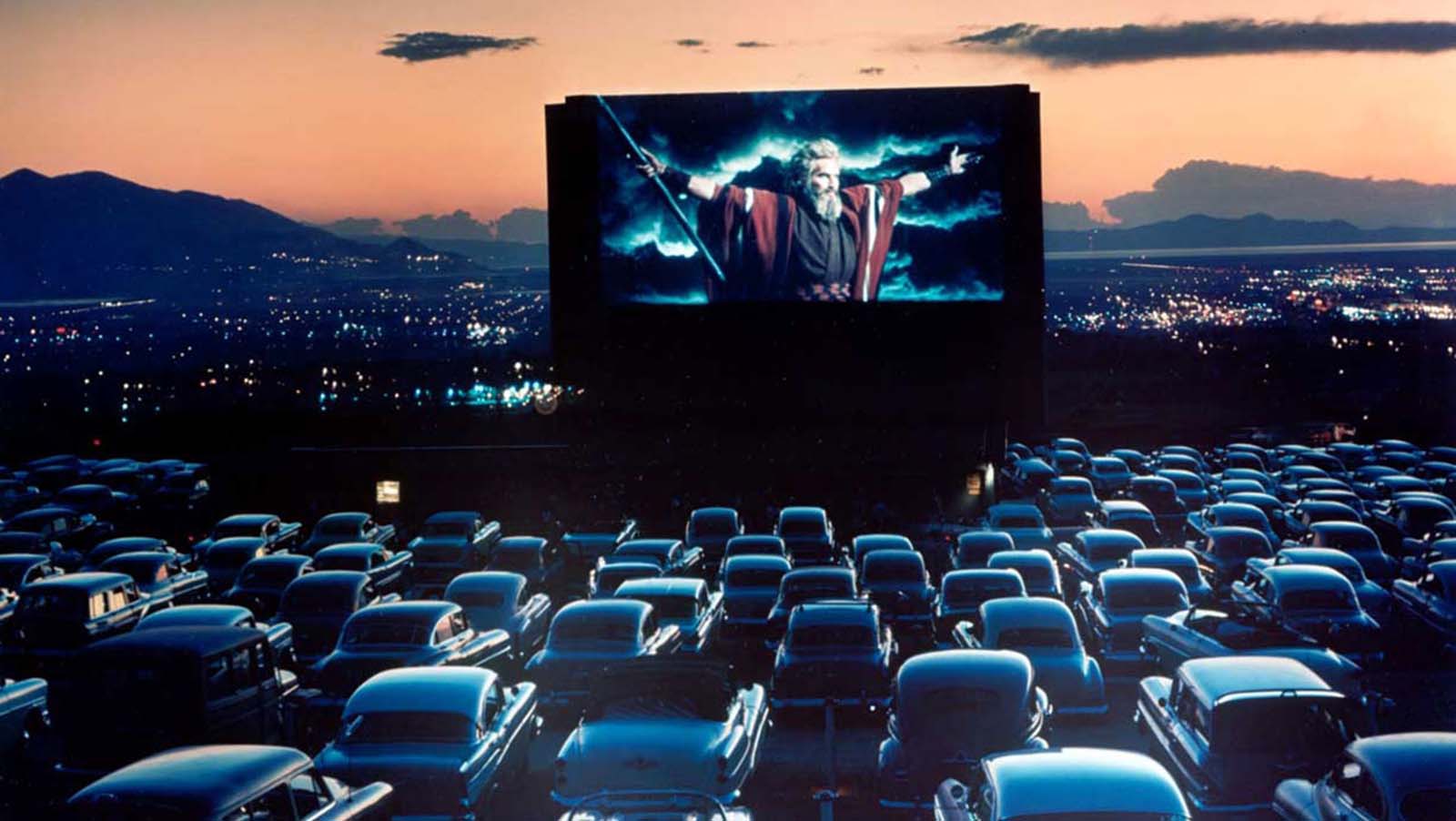 Actor Charlton Heston plays Moses with arms flung wide in the motion picture “The Ten Commandments,” shown at a drive-in movie theater in 1958.

Though there were drive-ins as early as the 1910s, the first patented drive-in was opened on June 6, 1933, by Richard Hollingshead in New Jersey. It offered room for 400 vehicles. He created it as a solution for people unable to comfortably fit into smaller movie theater seats after creating a mini drive-in for his mother. Appealing to families, Hollingshead advertised his drive-in as a place where “The whole family is welcome, regardless of how noisy the children are.”

The success of Hollingshead’s drive-in caused more and more drive-ins to appear in every state in the country and spread internationally as well. Drive-ins gained immense popularity 20 years later during the 1950s and ‘60s with the Baby Boomer generation.

There were over 4,000 drive-ins throughout the U.S. and most were located in rural areas. They maintained popularity as both a space for families to spend time with each other as well as an affordable date night option.

Drive-ins were not without challenges: the sound broadcast from the screen reached viewers in the back with an annoying time delay, out of sync with what was happening in the film.

This was addressed first by more speakers, then by clip-on car speakers, and ultimately by broadcasting the soundtrack direct to car radios. In addition, revenue was limited by the need to show films only after dark. Despite experiments with massive tents, this problem was never solved. 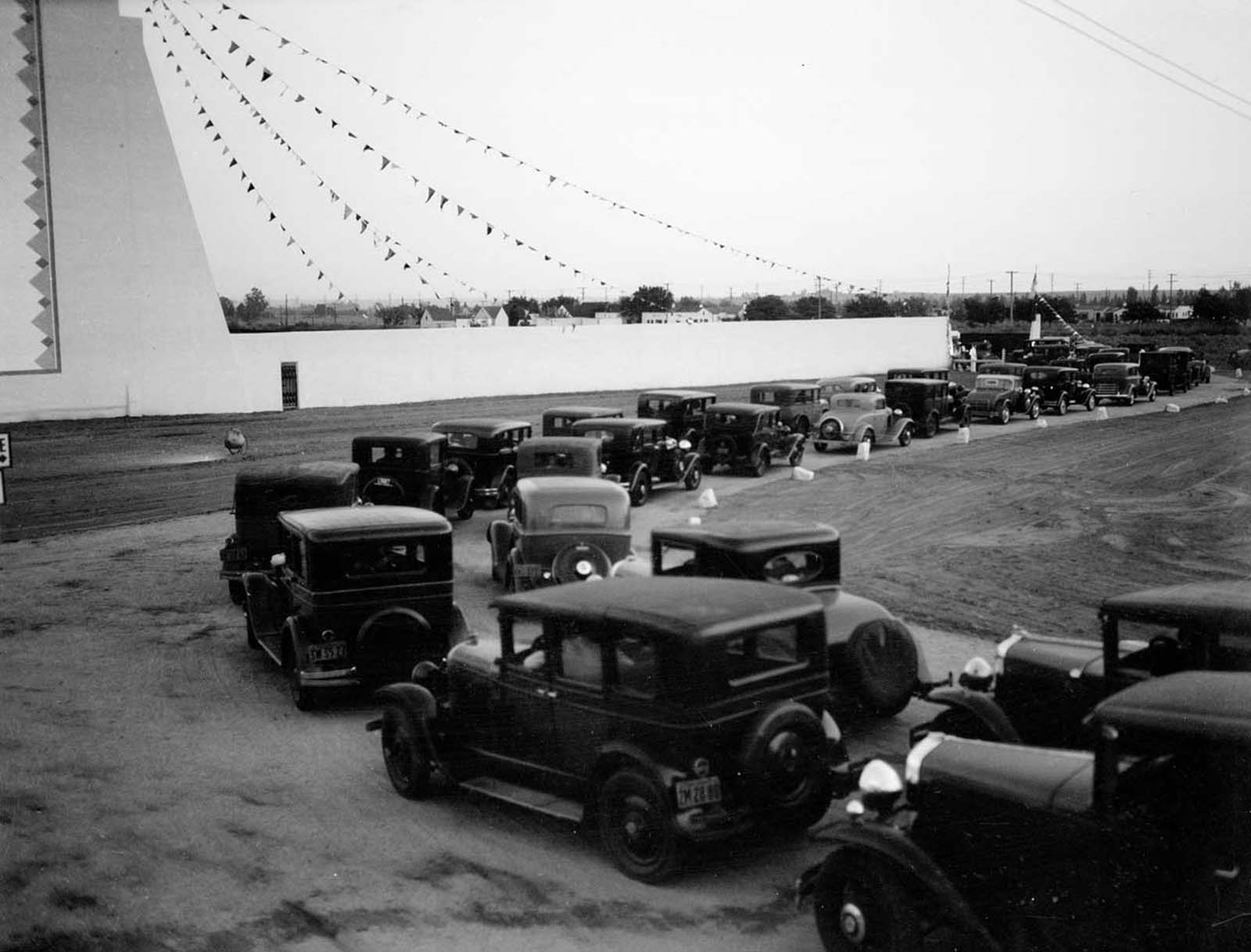 Line of automobiles at opening day of Drive-In Movie Theater.

Yet for the patrons, the one huge plus of the drive-in was the privacy afforded by the car. As well as taking away the need to ask children to be quiet, it also offered the ideal environment for a date, with the seductive combination of entertainment, darkness and privacy, all in a confined space.

But ultimately drive-ins would pay the price for this environment, securing a reputation as places of ill-repute. To make up for lost revenue, drive-ins began losing their family-friendly atmosphere by showing exploitation films like slasher horrors as well as adult content. The development of the VCR made it more appealing to stay at home and watch movies without paying for a movie at the drive-in.

Slowly, drive-ins began to lose their appeal. In order to have an effective drive-in, it had to be on at least 15 acres of land. Economically speaking, it became more practical for owners to close down their drive-ins in order to sell their land to developers to build malls or multi-building complexes.

Even though drive-ins are not nearly as popular as they used to be (with some arguing that they will be obsolete within the next decade), there are still drive-ins in business throughout the United States. No matter the fate of America’s drive-ins, they will always be nostalgic and cultural icons. 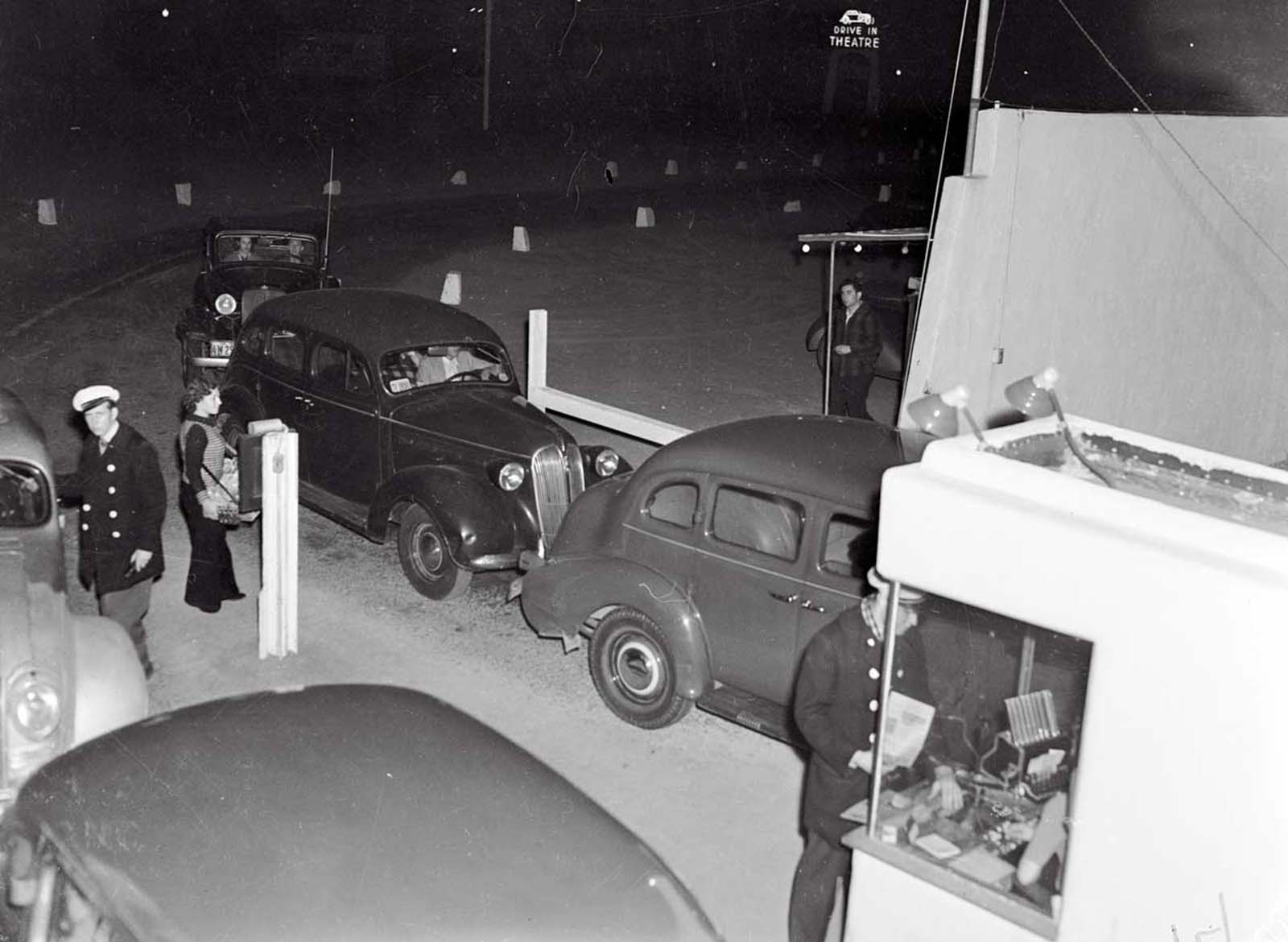 (Original Caption) The Cinemotor Theater. Los Angeles, Calif.: Motoring and motion pictures achieve a happy wedding in the Drive-In Theater in Los Angeles. The theater is a parking lot with graduated tiers from which motorists seated in their cars, watch the films projected on a giant screen. Synchronized amplifiers in the front of each car make speech audible in all parts of the lot. Here’s the entrance to the unique theater, showing the cashier’s wicket, and “butcher-girl” in front. 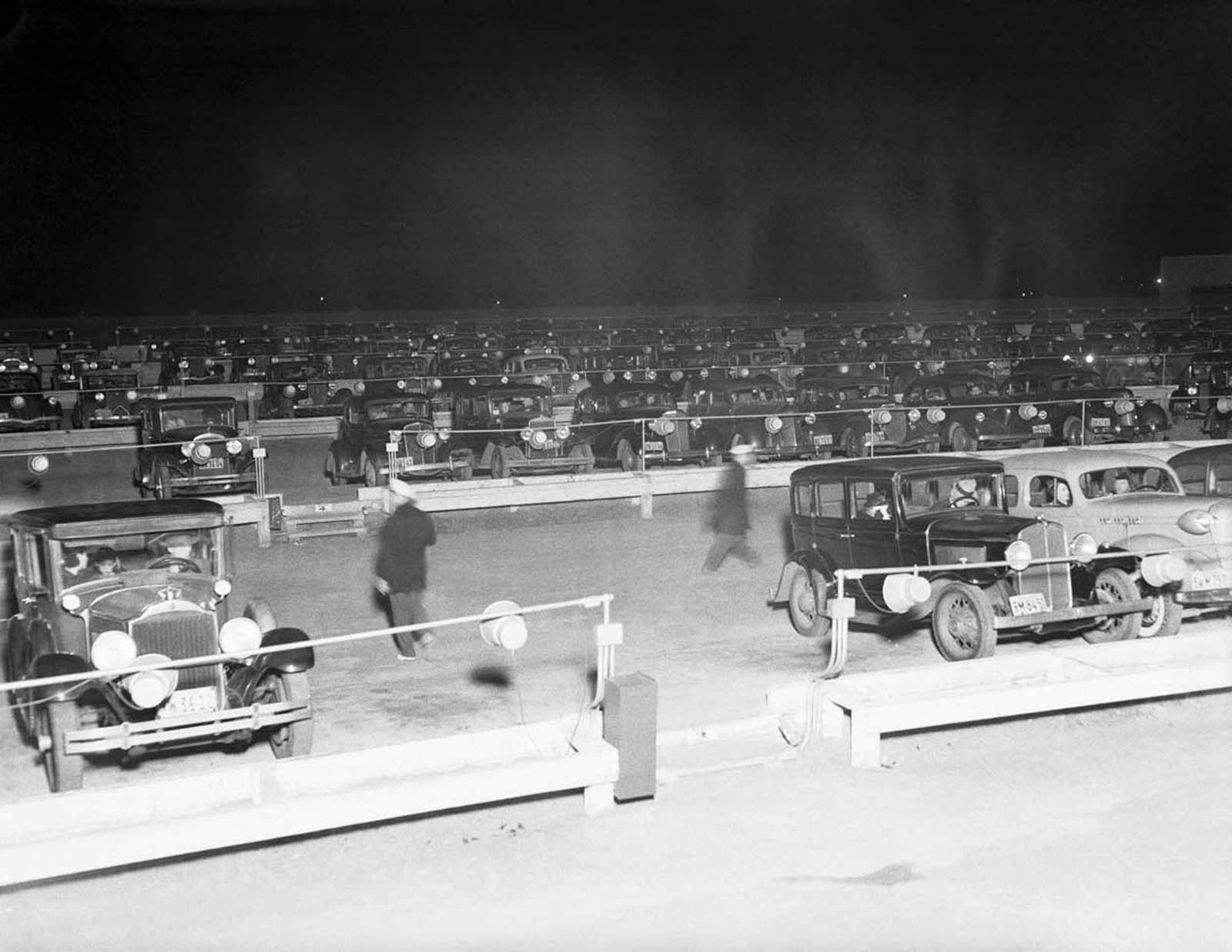 The era of drive-in movie theaters. 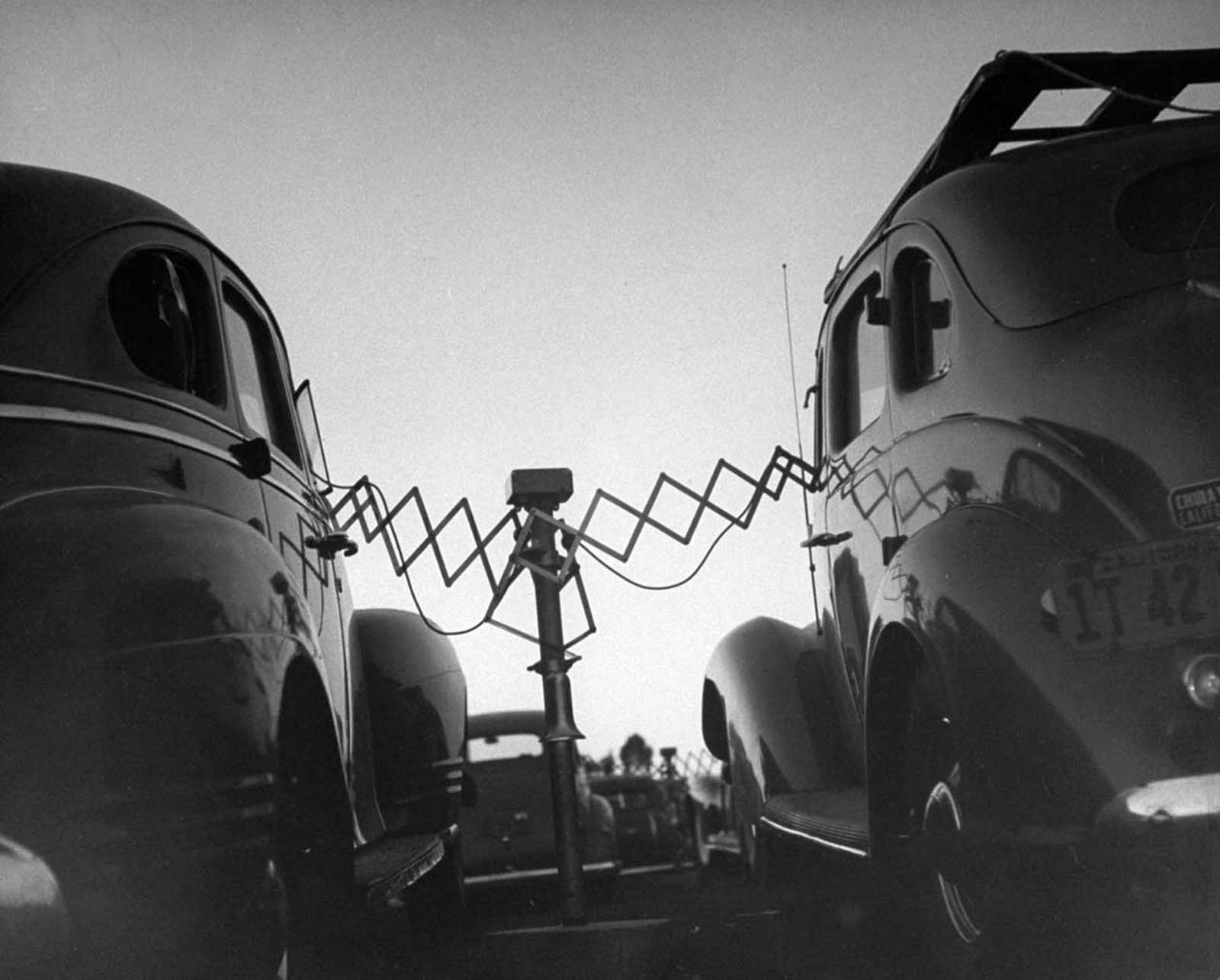 Cars parked at Rancho Drive-In Theater with the accordion-like fulcrum arms of movie speakers reaching into each driver’s front window, which they will push back onto the central post when the movie is over. 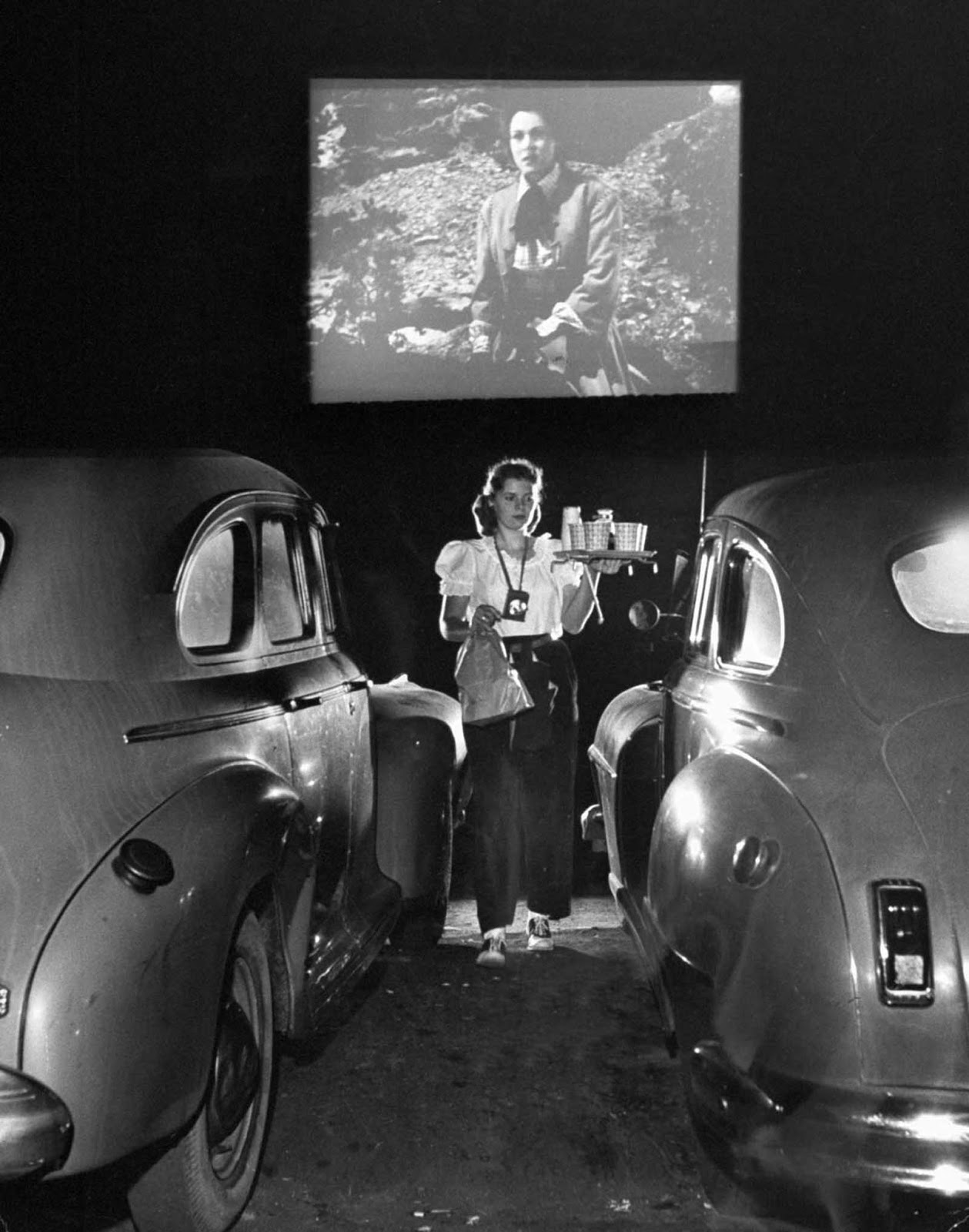 Carhop with a flashlight hanging from her neck as she carries a tray of food. 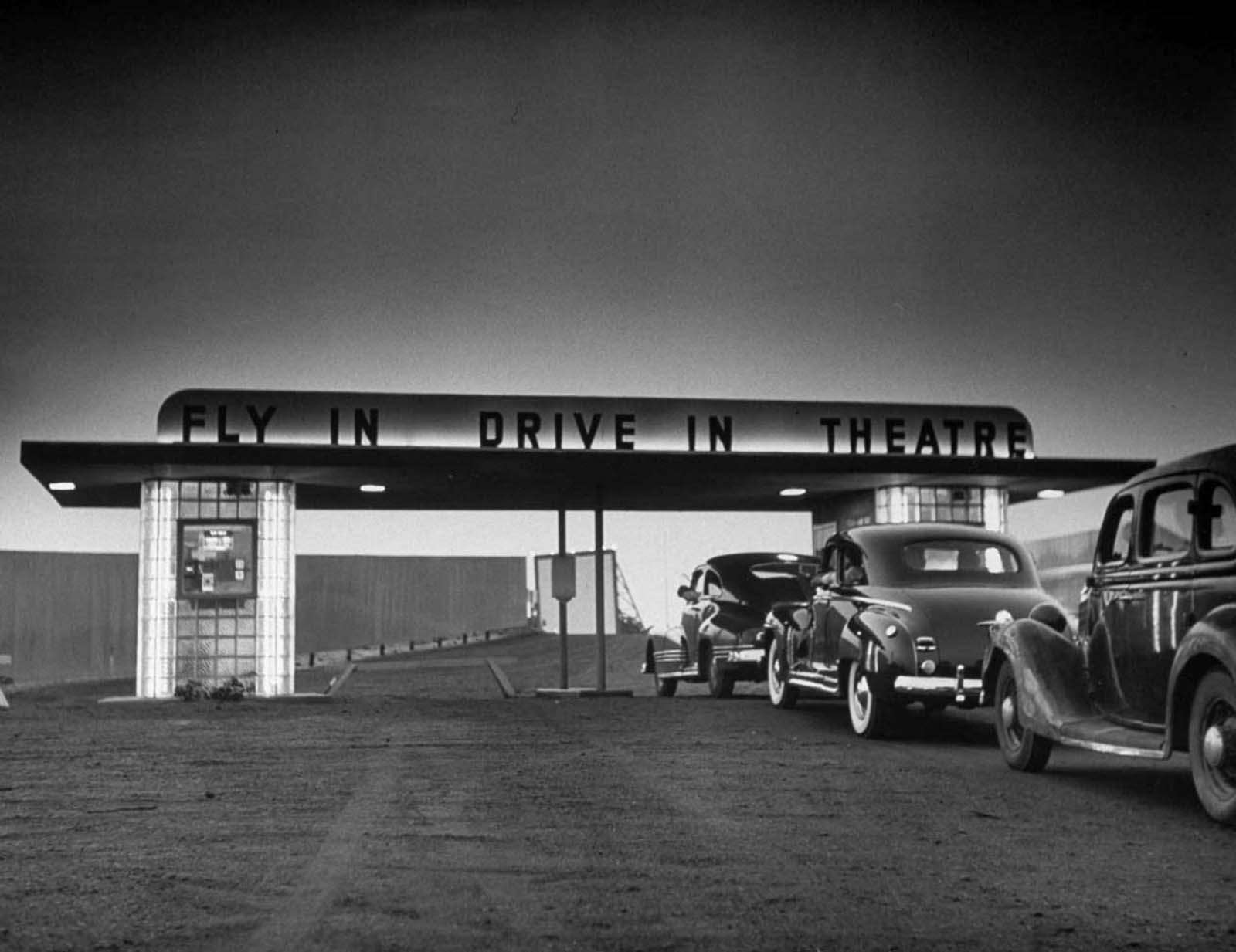 Some customers arriving by car at area Fly-In Drive-In Theatre. 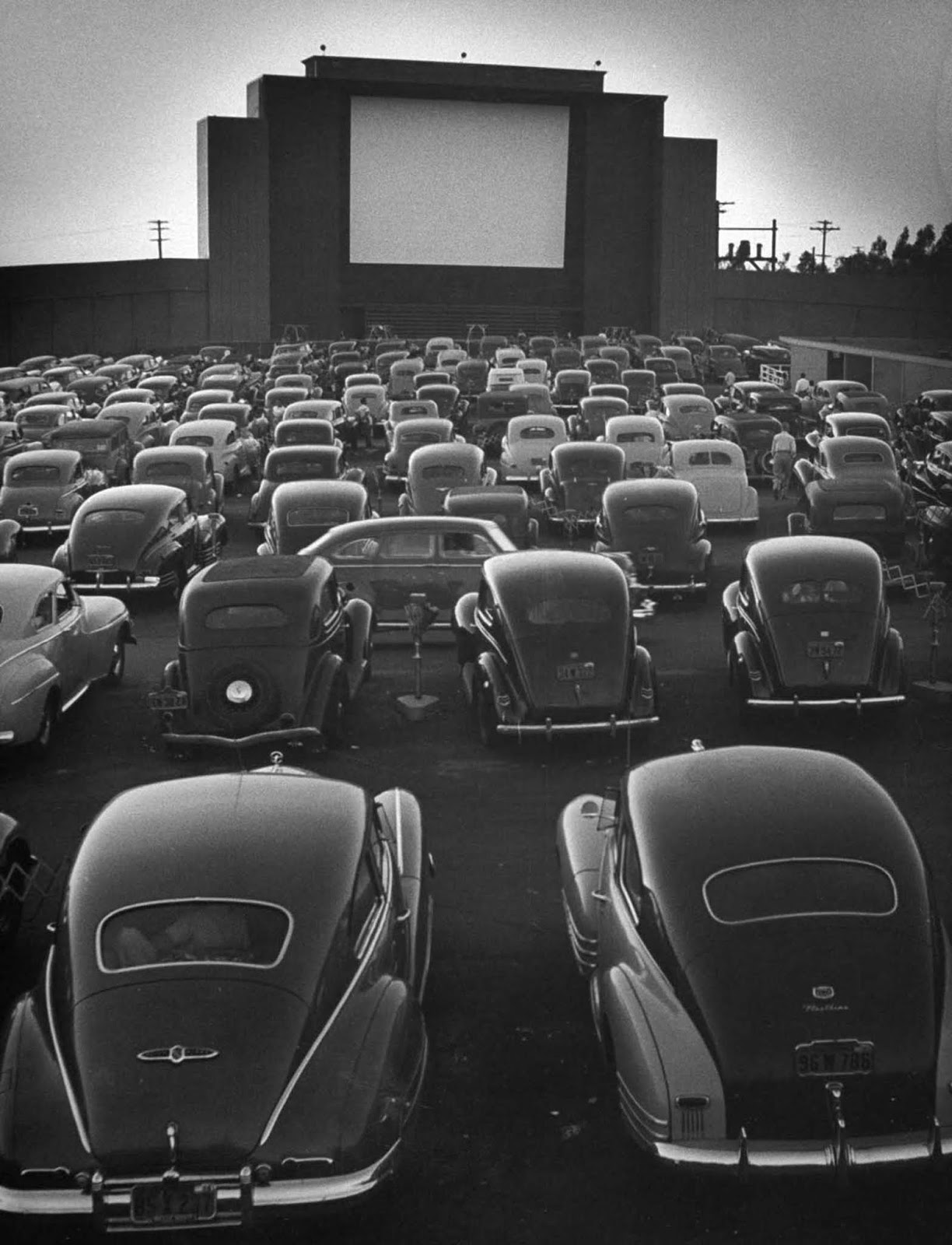 Cars filling lot at new Rancho Drive-In Theater at dusk before the start of the feature movie. 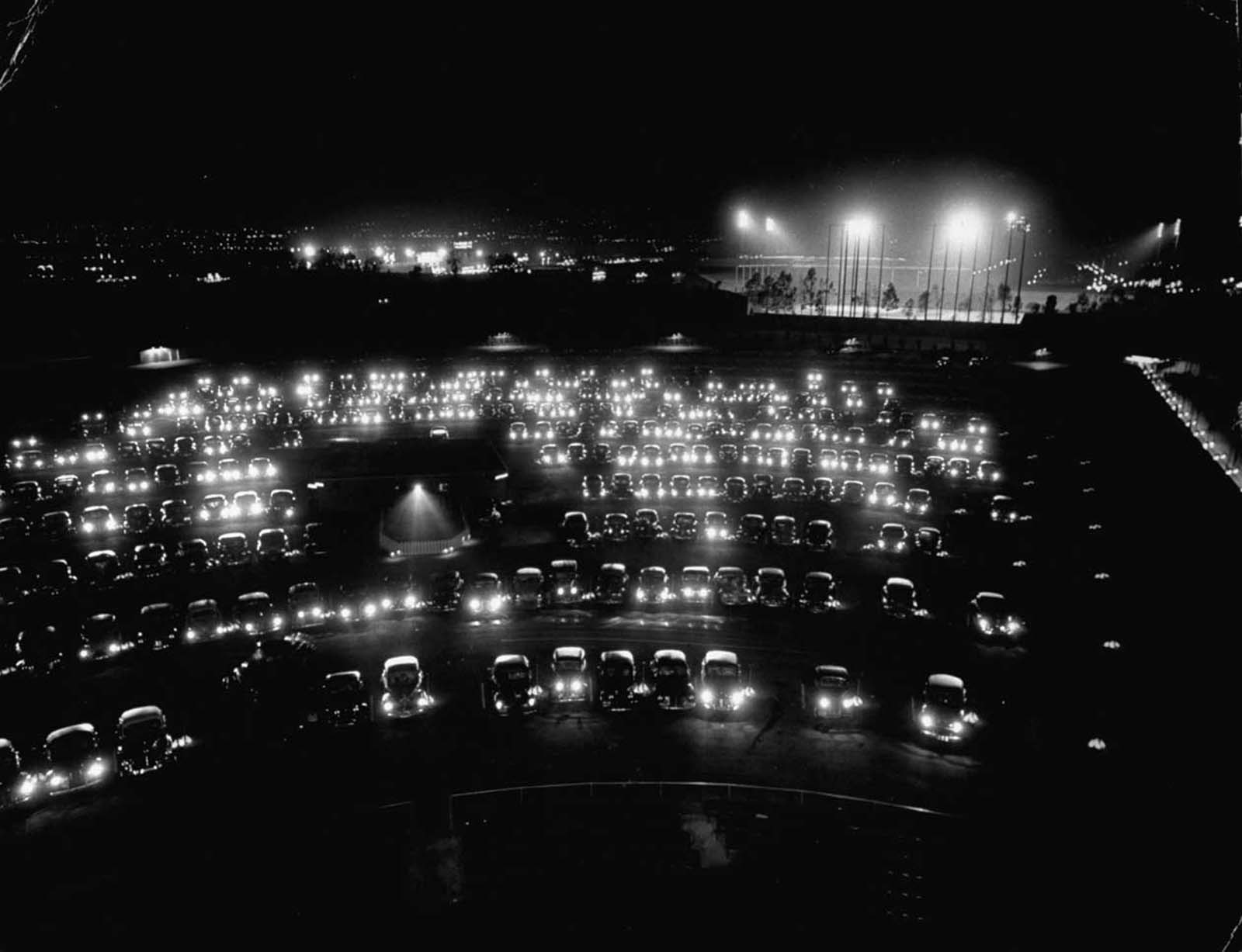 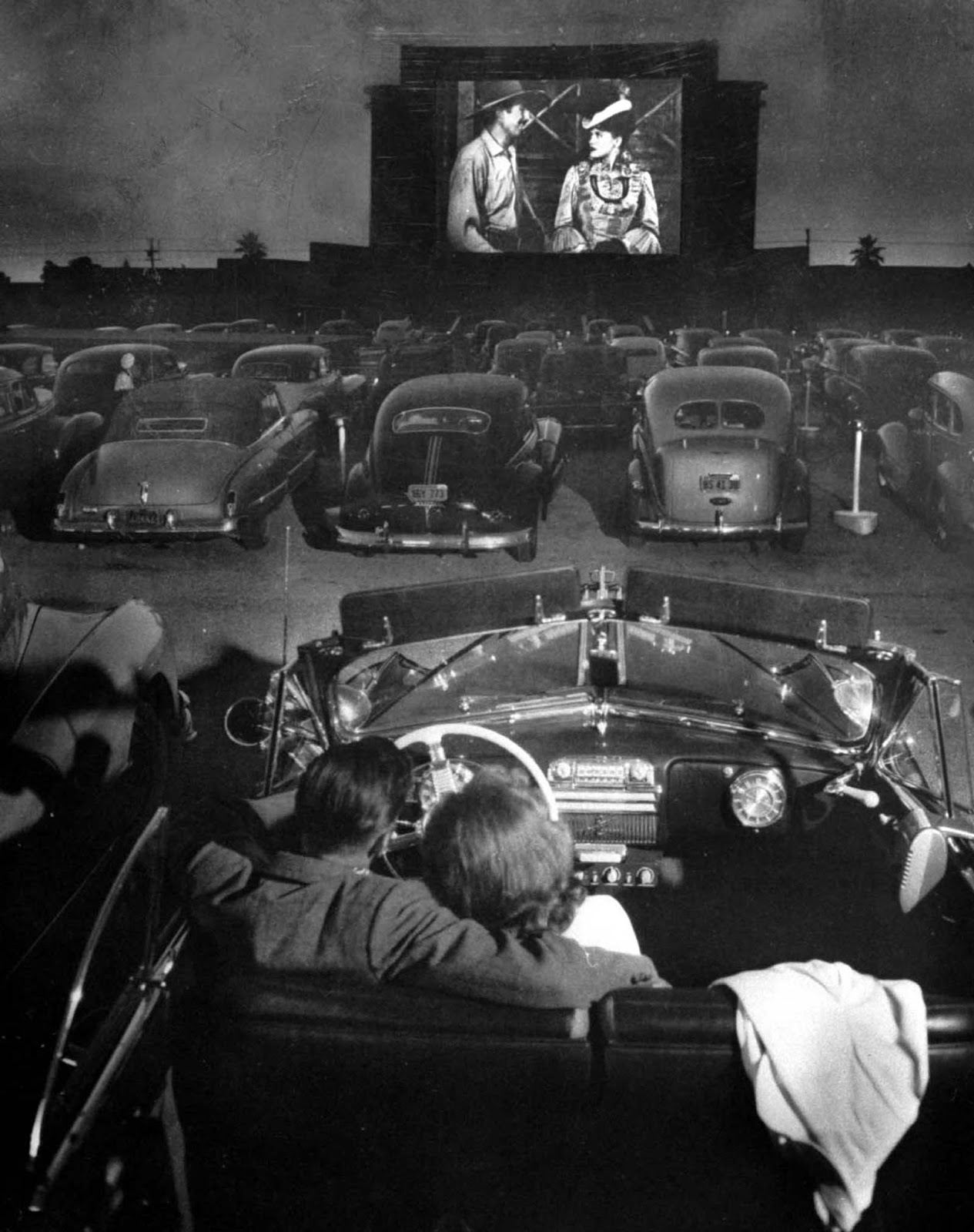 Rear view of young couple snuggling behind the wheel of his convertible as they watch large screen action behind rows of cars at a drive-in movie theater. 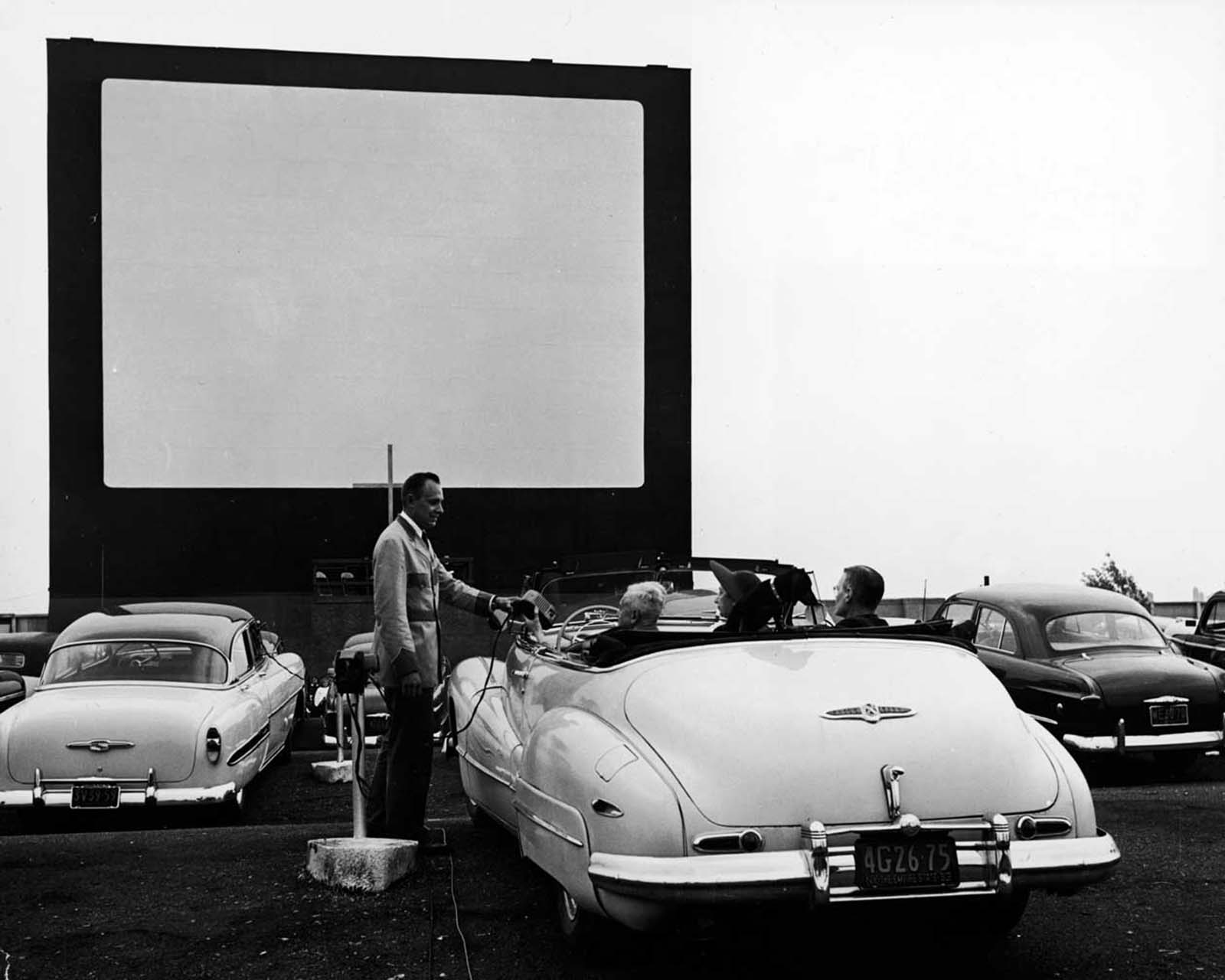 A uniformed drive-in theater attendant hands a clip-on speaker to the driver of a convertible while the car’s other passengers watch, New York, early 1950s. 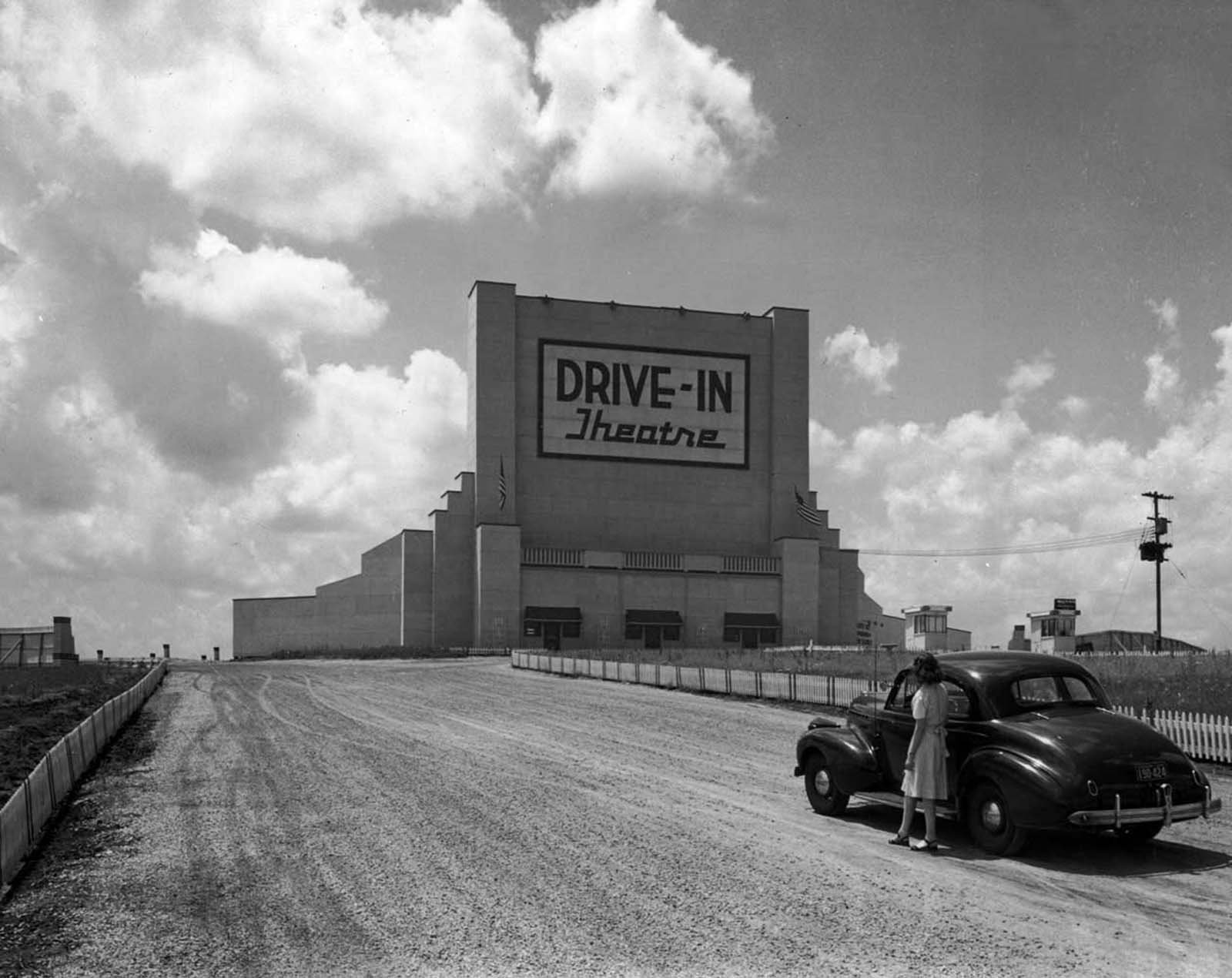 Full-length image of a woman standing next to a parked car in the middle of the road, looking up at a sign that reads, ‘Drive-In Theatre’.