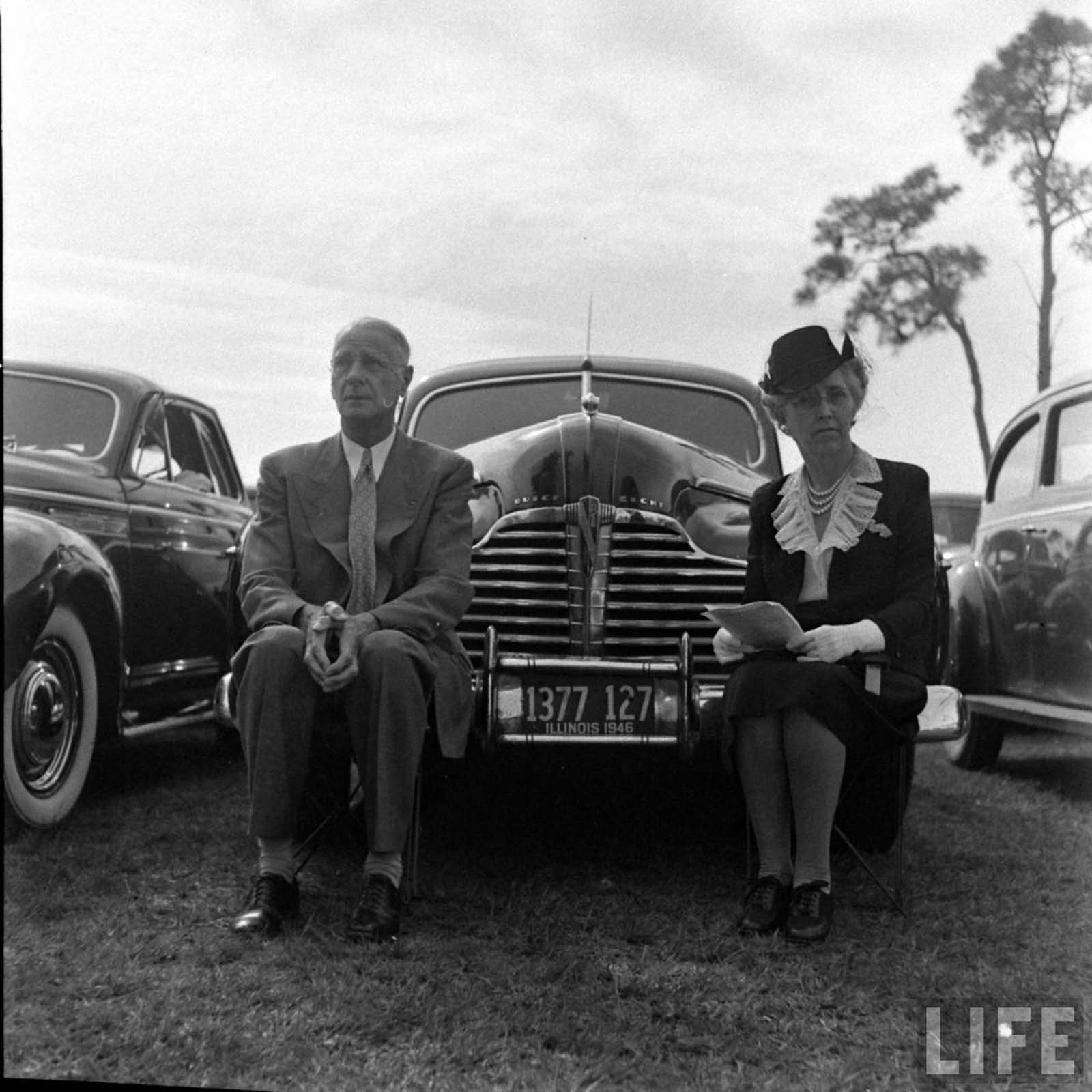 That’s a very American way to attend the church.

After the Second World War, America’s love affair with the automobile was in full swing. You could drive through about anything – movie theaters, car washes, restaurants, banks and…even churches. That’s a very American way to attend the church. These rare photographs of a drive-in church in St. Petersburg (Florida) were captured for an article to be featured in LIFE magazine that was never published. They’re definitely lacking some popcorn, maybe a few roller-skating preachers delivering the altar bread, but all in all, the idea gives some spice to a Sunday service. St. Petersburg still has a drive-in church today, but without the impressive line-up of classic cars, we can imagine it doesn’t quite have the same charm.

The first historical official drive-in establishment was a movie theater. A partial drive-in theater – Theatre de Guadalupe – was opened in Las Cruces, New Mexico, on April 23, 1915: Seven hundred people may be comfortably seated in the auditorium. Automobile entrances and places for 40 or more cars within the theater grounds and in-line position to see the pictures and witness all performances on the stage is a feature of the place that will please car owners.

In 1921, a drive-in was opened by Claude V. Caver in Comanche, Texas. Caver obtained a permit from the city to project films downtown. With cars parked bumper-to-bumper, patrons witnessed the screening of silent films from their vehicles. In the 1920s, “outdoor movies” became a popular summer entertainment, but relatively few “drive-in” experiments were made due to logistical difficulties.

The drive-in theater was patented in Camden, New Jersey by chemical company magnate Richard M. Hollingshead, Jr., whose family owned and operated the R.M. Hollingshead Corporation chemical plant in Camden. In 1932, Hollingshead conducted outdoor theater tests in his driveway at 212 Thomas Avenue in Riverton. After nailing a screen to trees in his backyard, he set a 1928 Kodak projector on the hood of his car and put a radio behind the screen, testing different sound levels with his car windows down and up. Blocks under vehicles in the driveway enabled him to determine the size and spacing of ramps so all automobiles could have a clear view of the screen. Hollingshead applied for a patent of his invention. Since that time the drive-in concept has been expanded to food industry, entertainment, churches and other establishments. 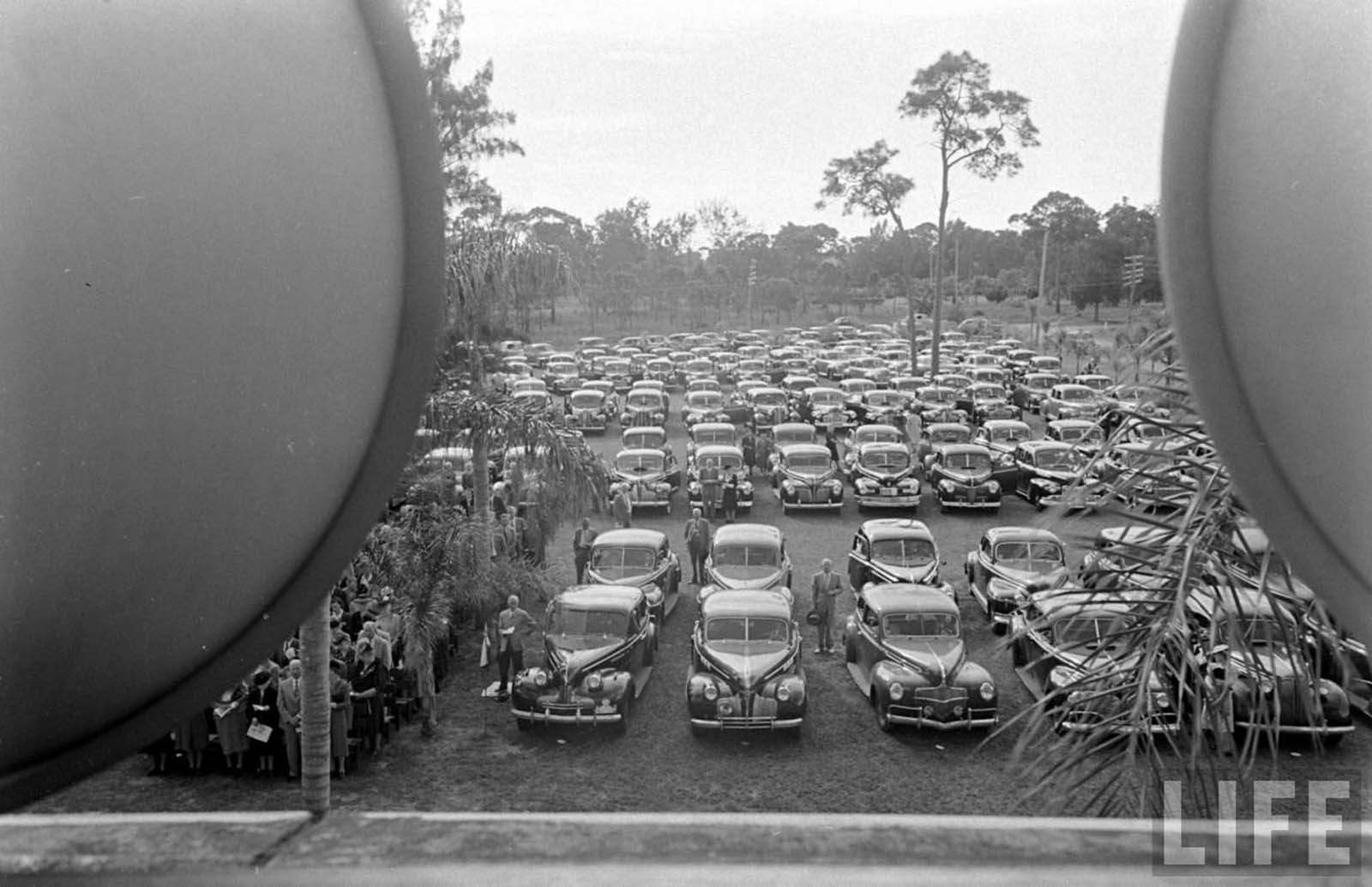 Classical cars lined up in this drive-in church. 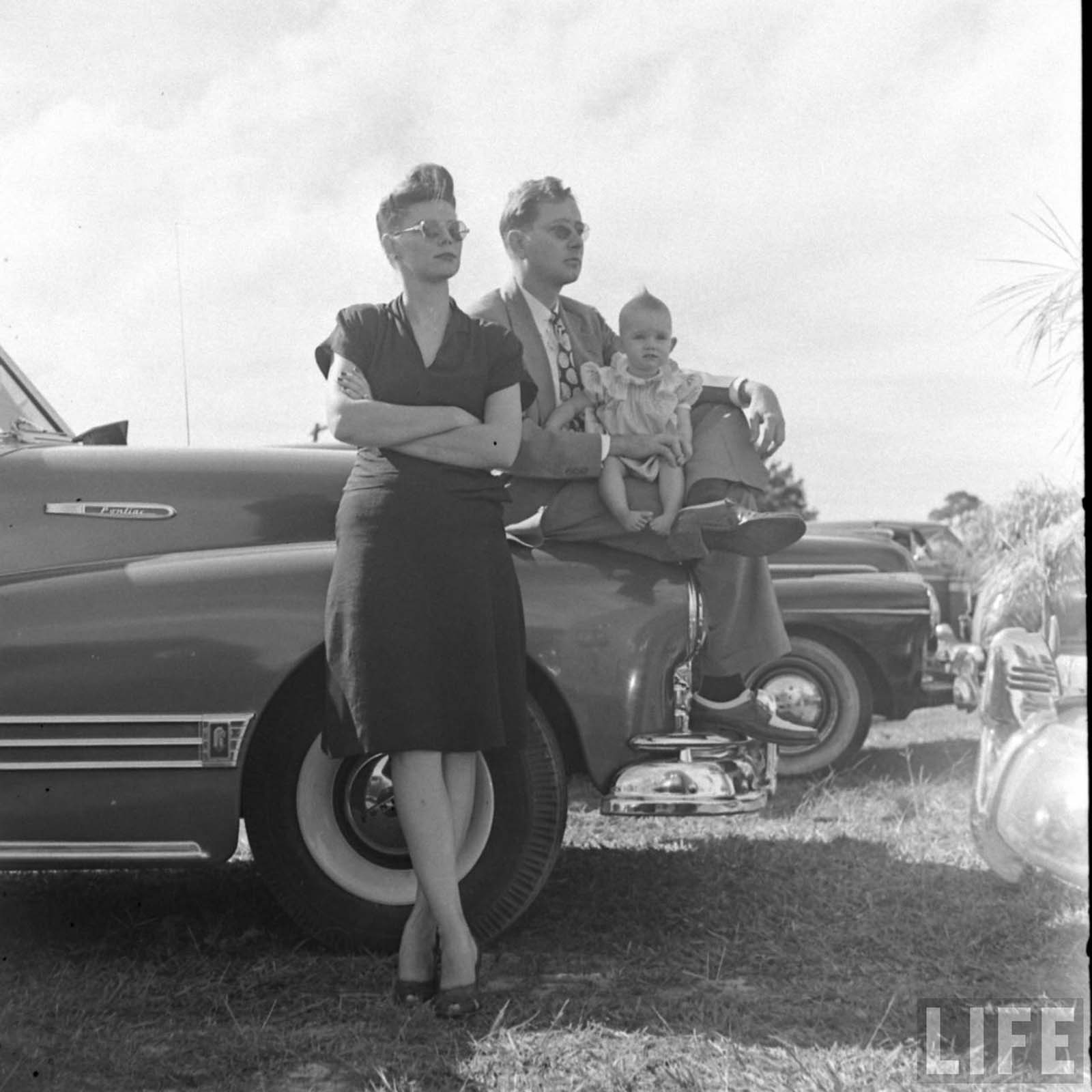 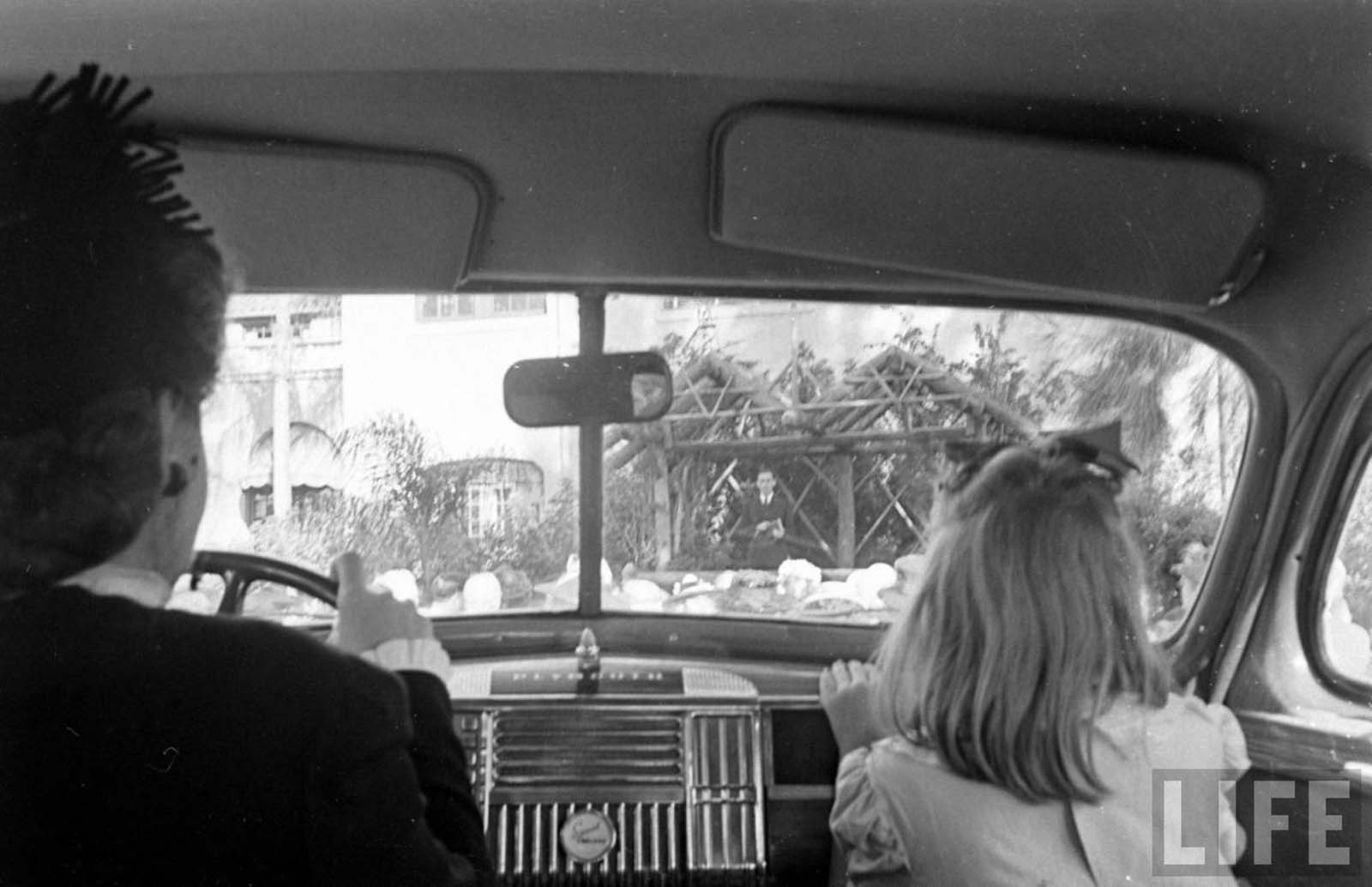 The first historical official drive-in establishment was a movie theater. 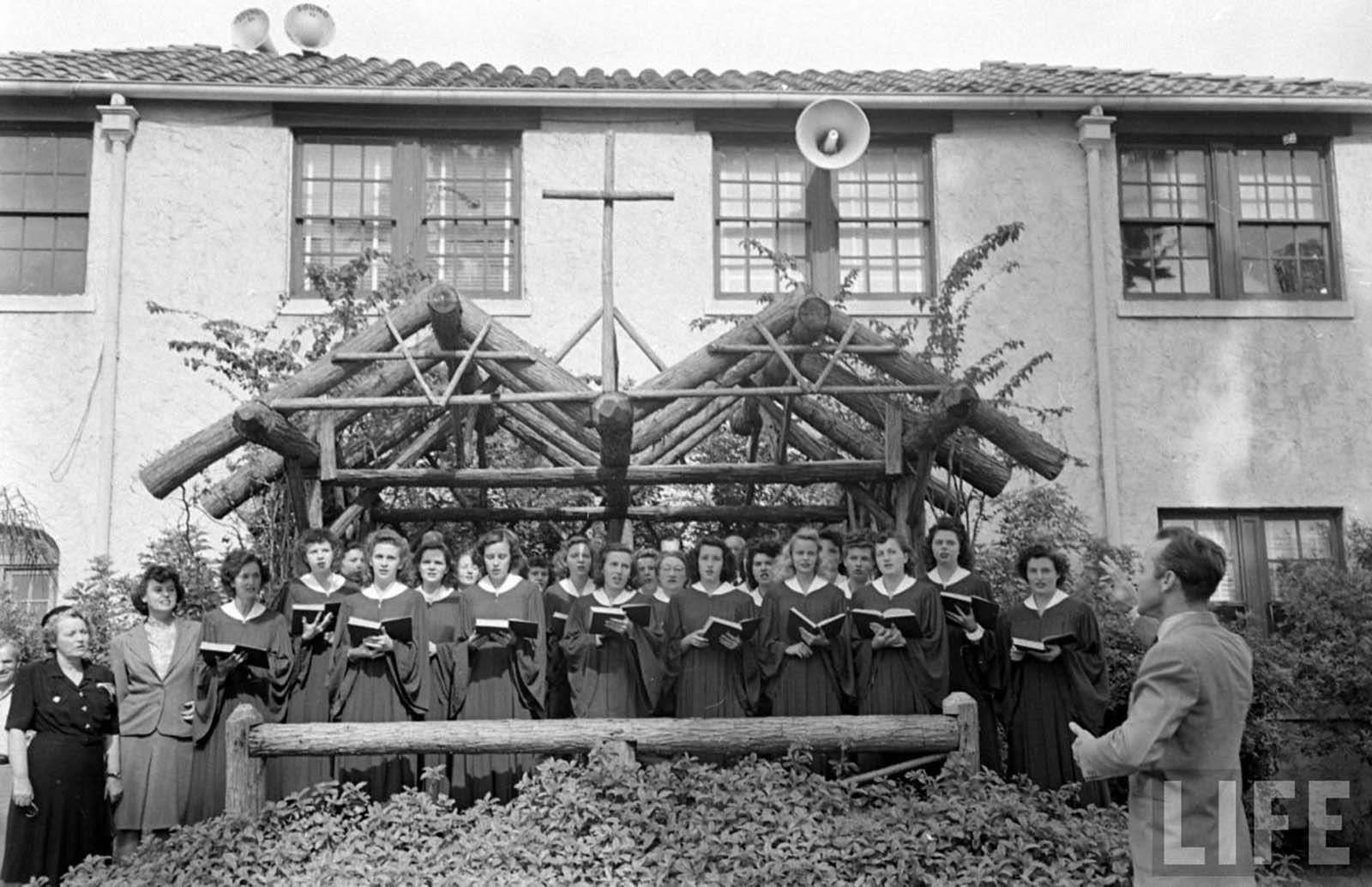 The chorus of the church. 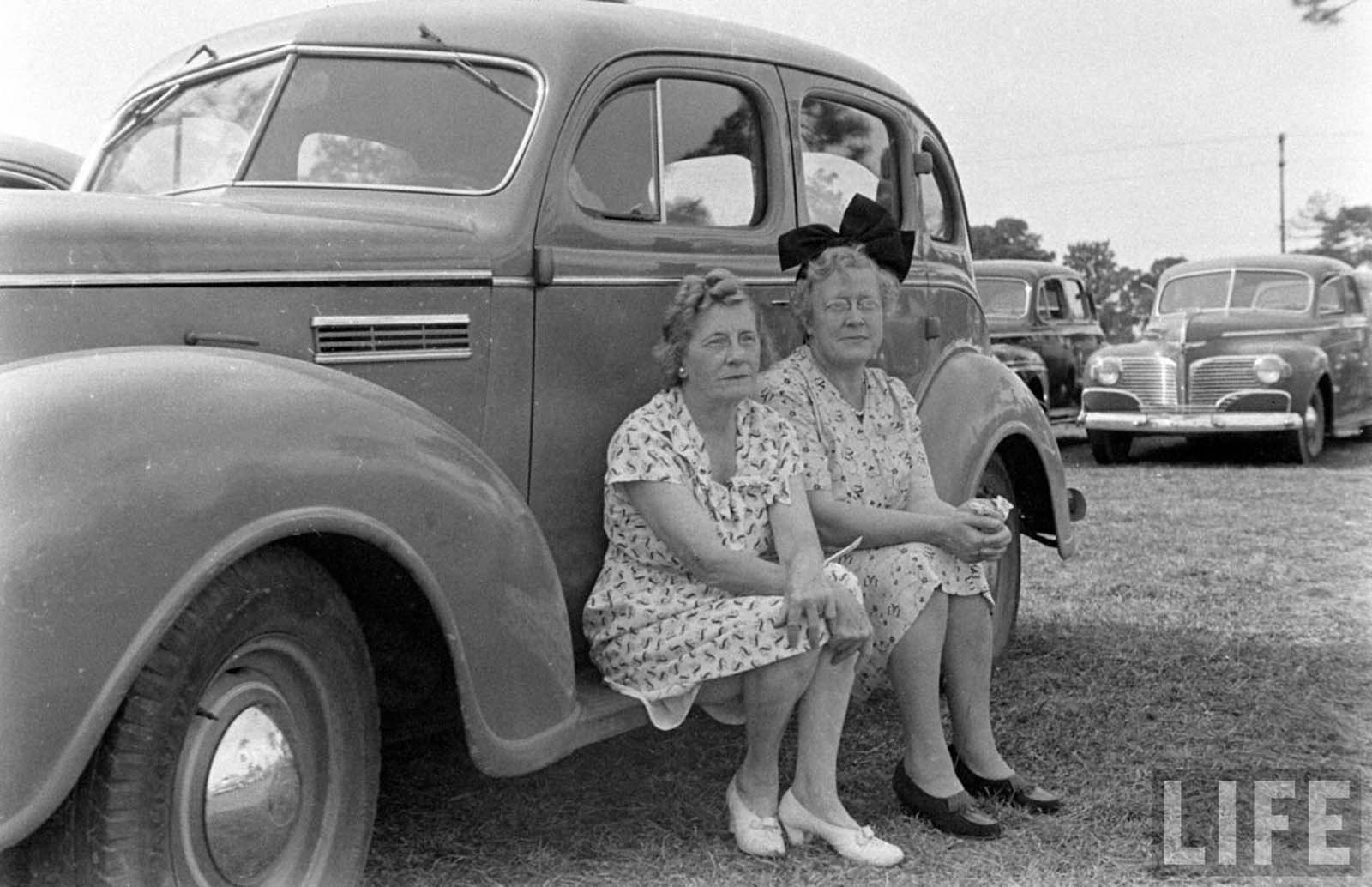 Two ladies praying (or not). 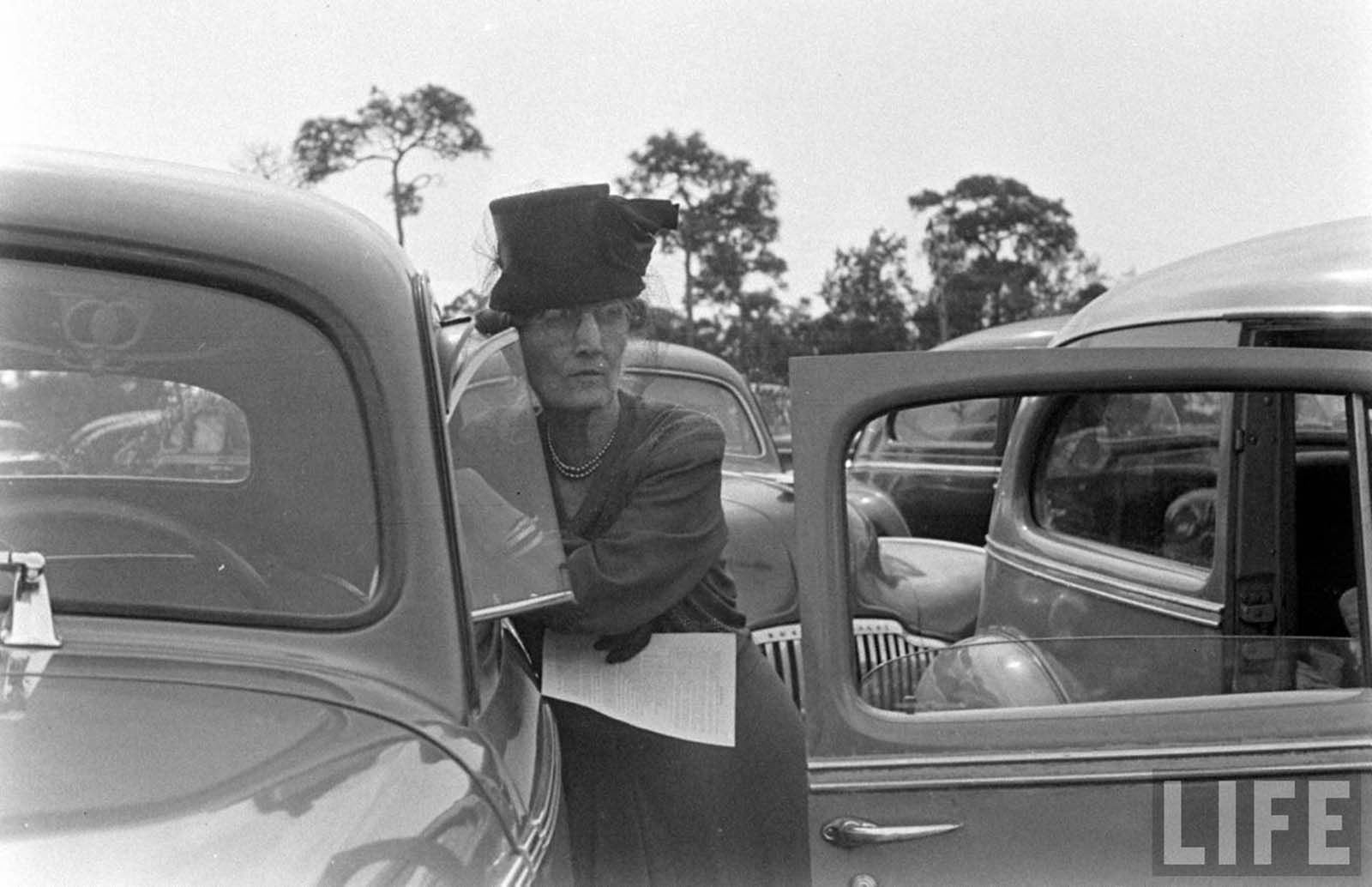 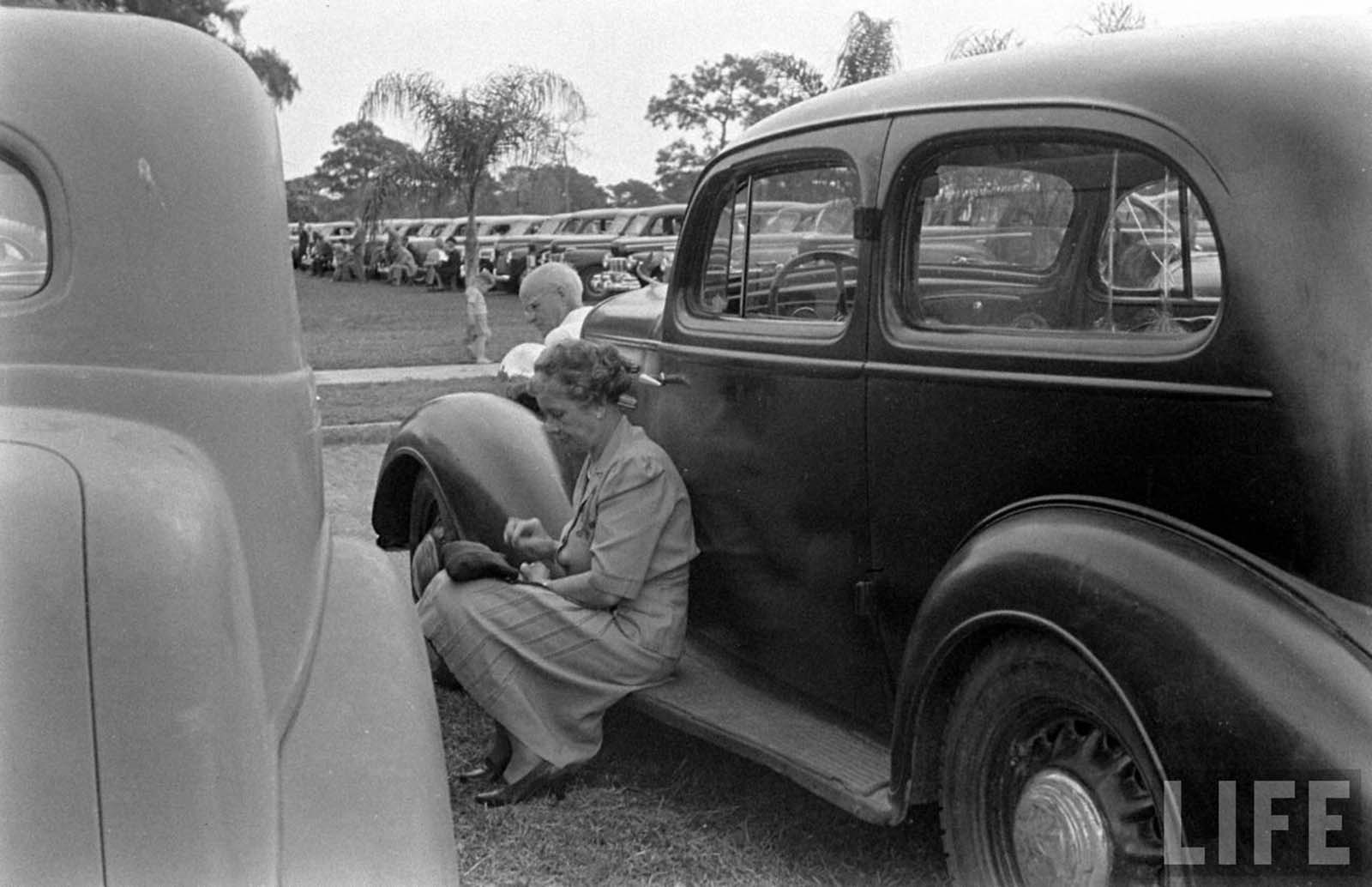 After the Second World War, America’s love affair with the automobile was in full swing. 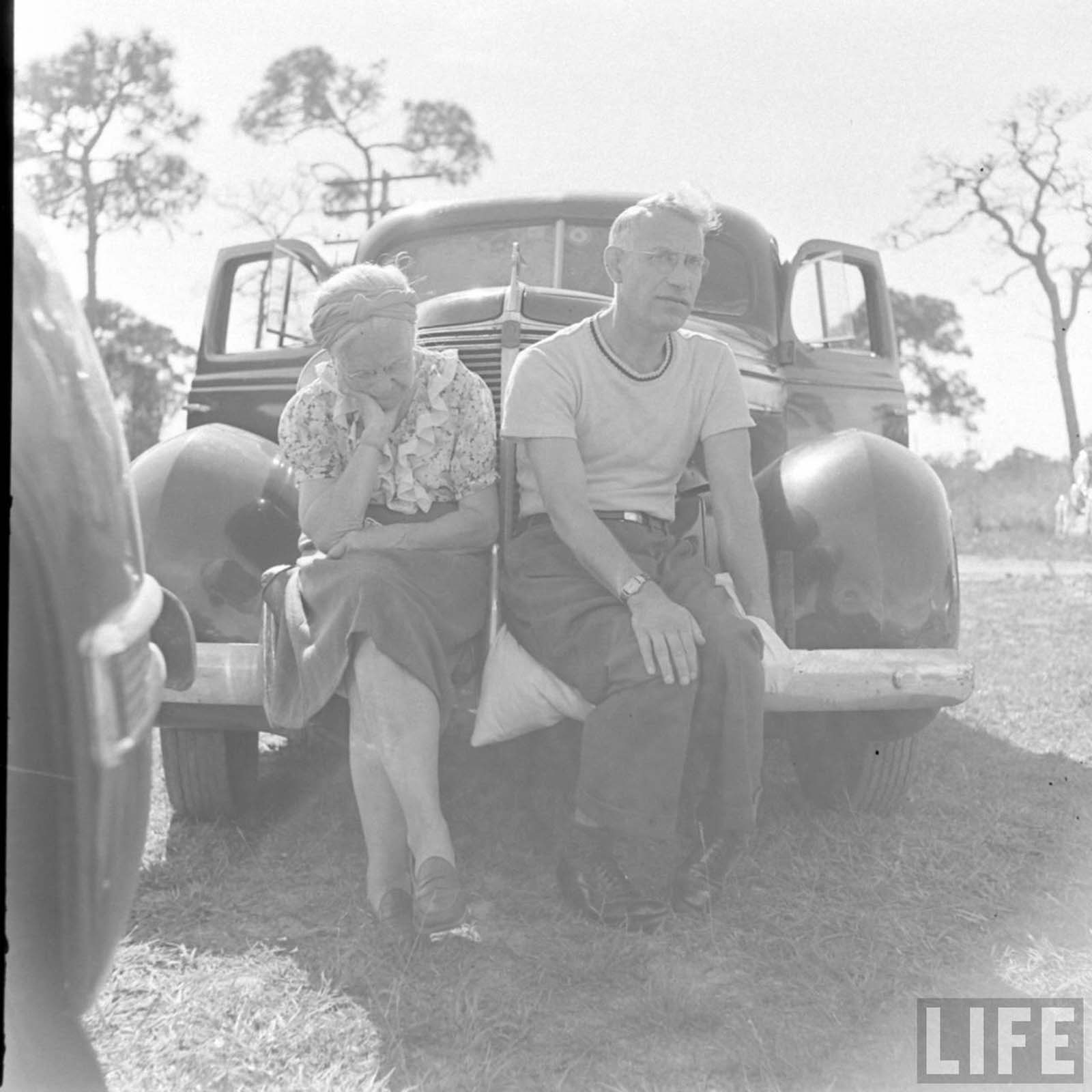 They even brought a pillow. 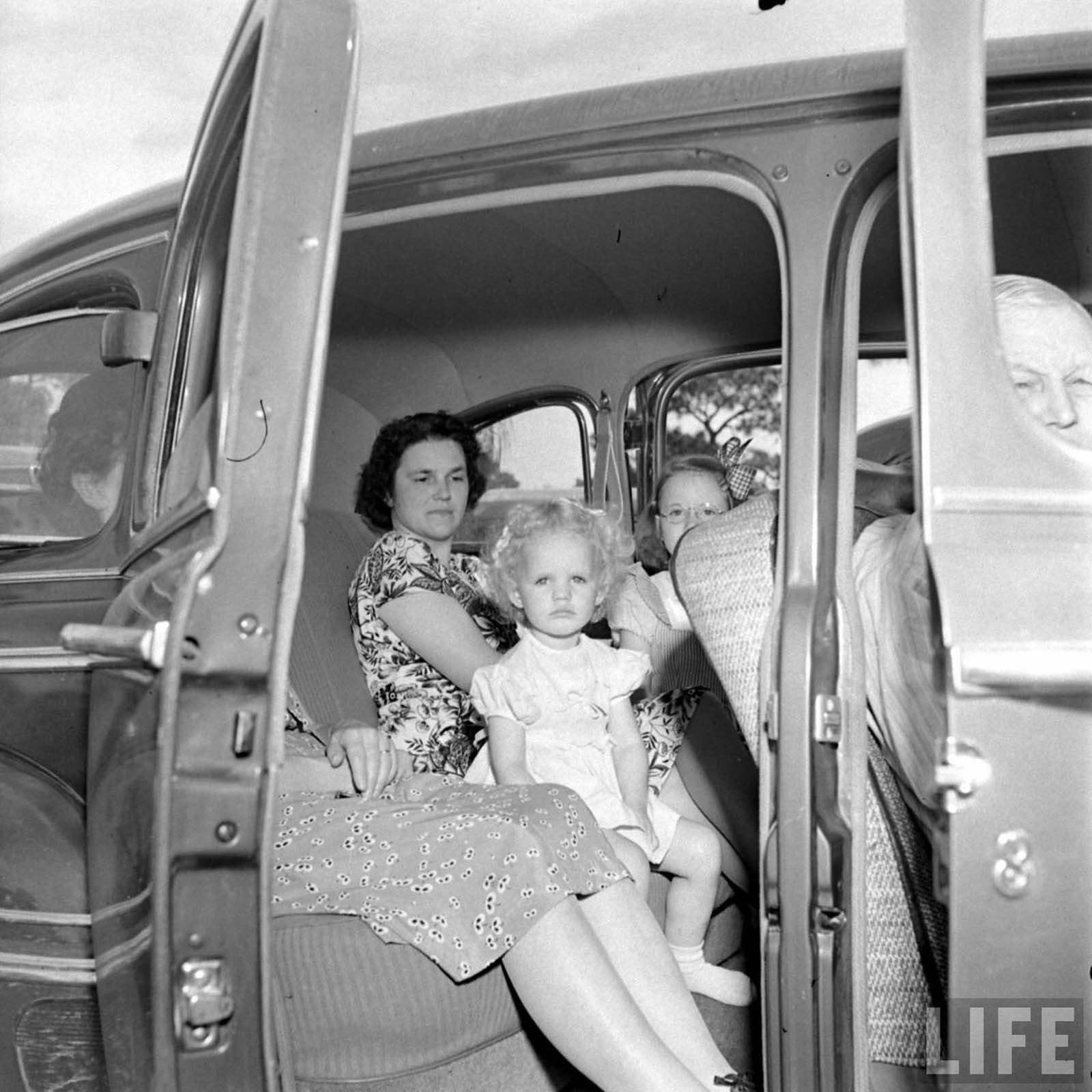 A family being comfortable in their own car while attending the church. 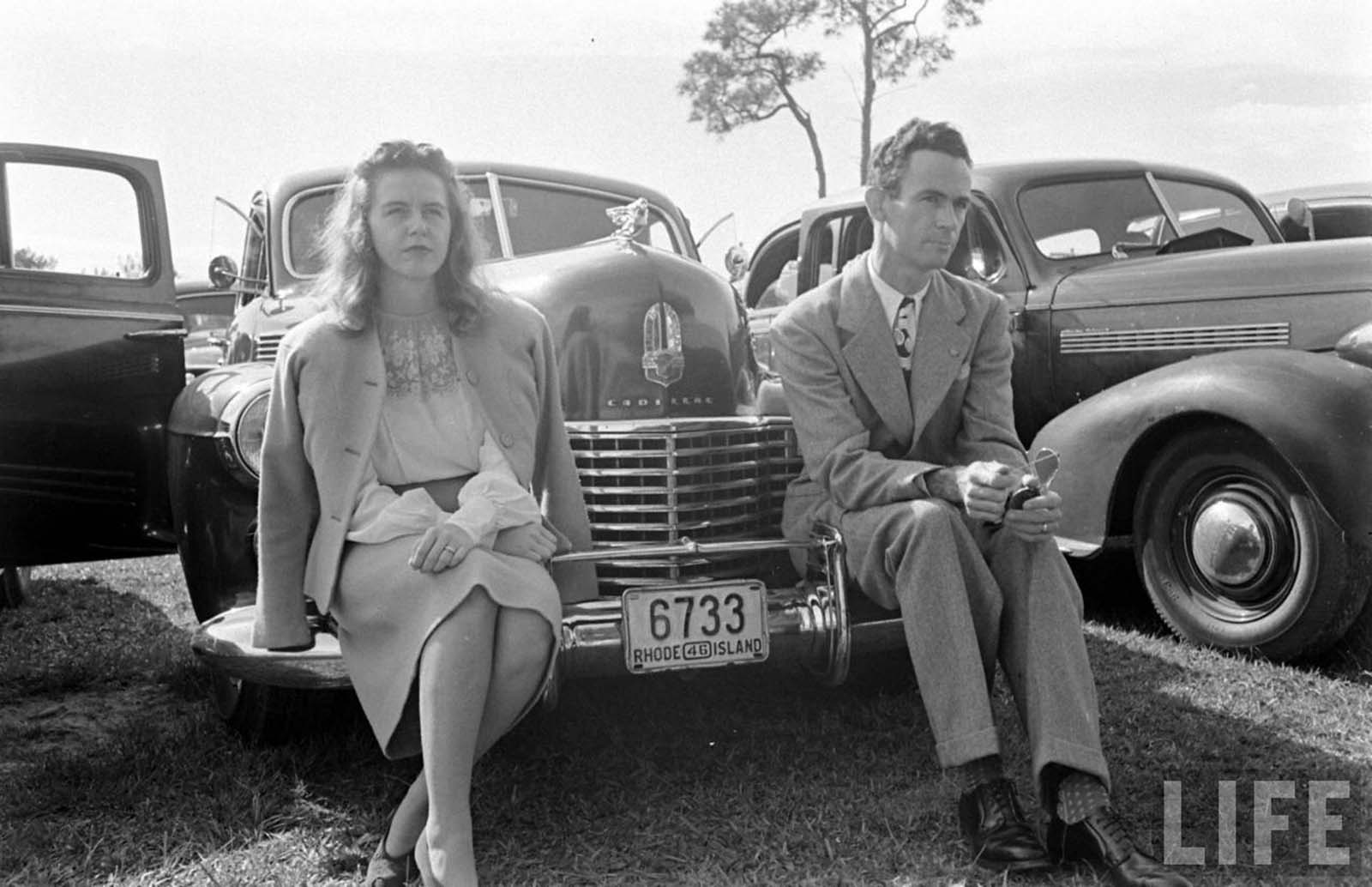 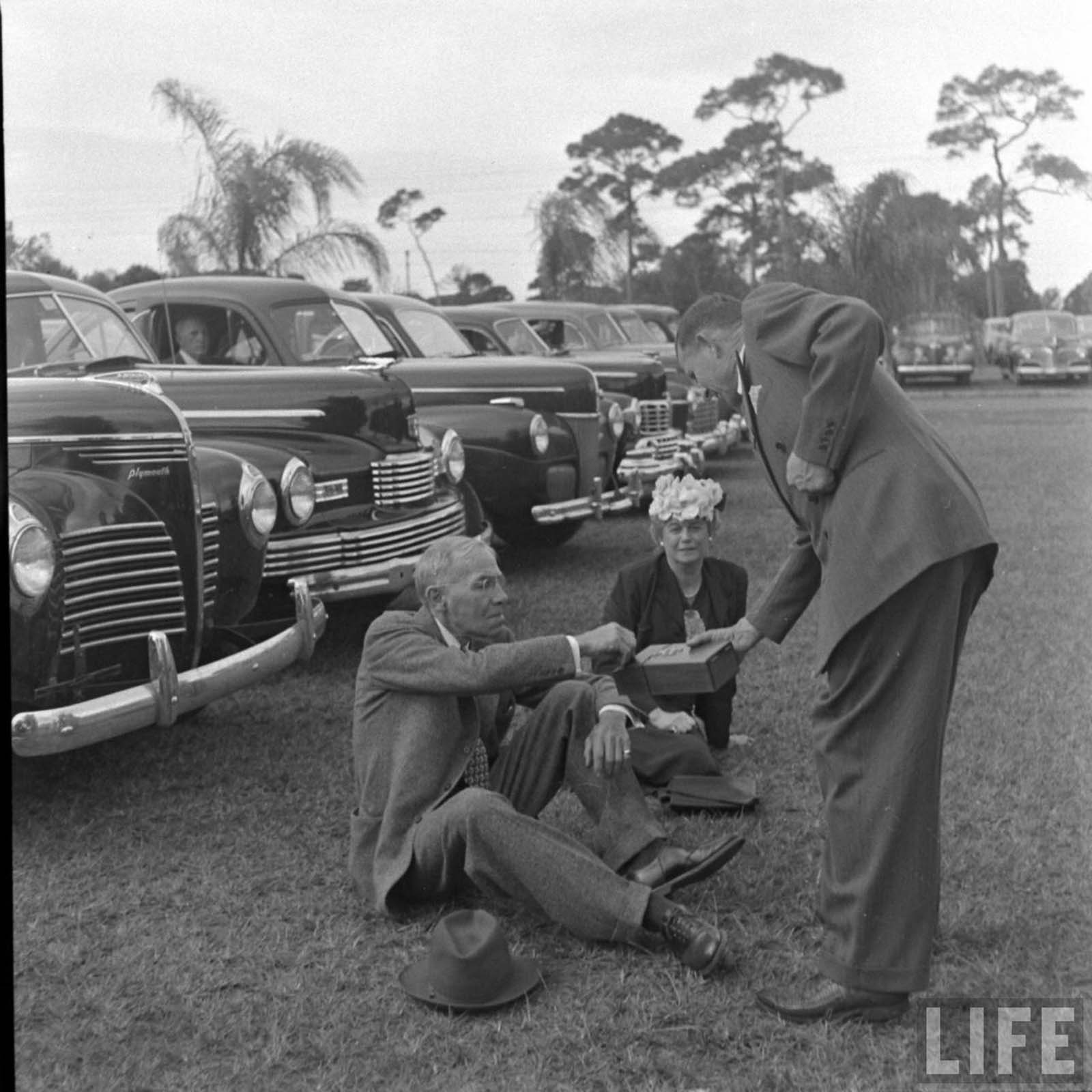 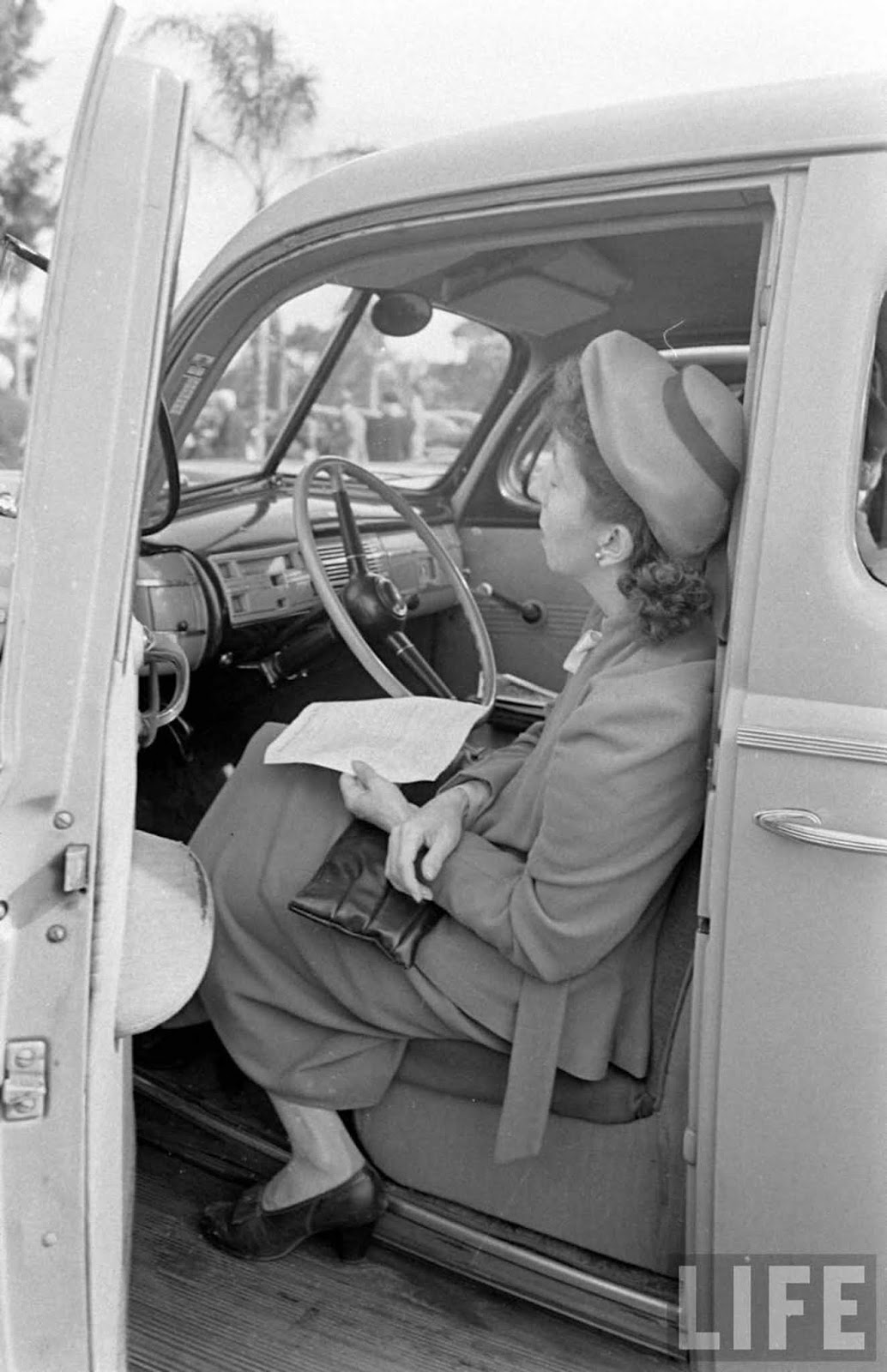 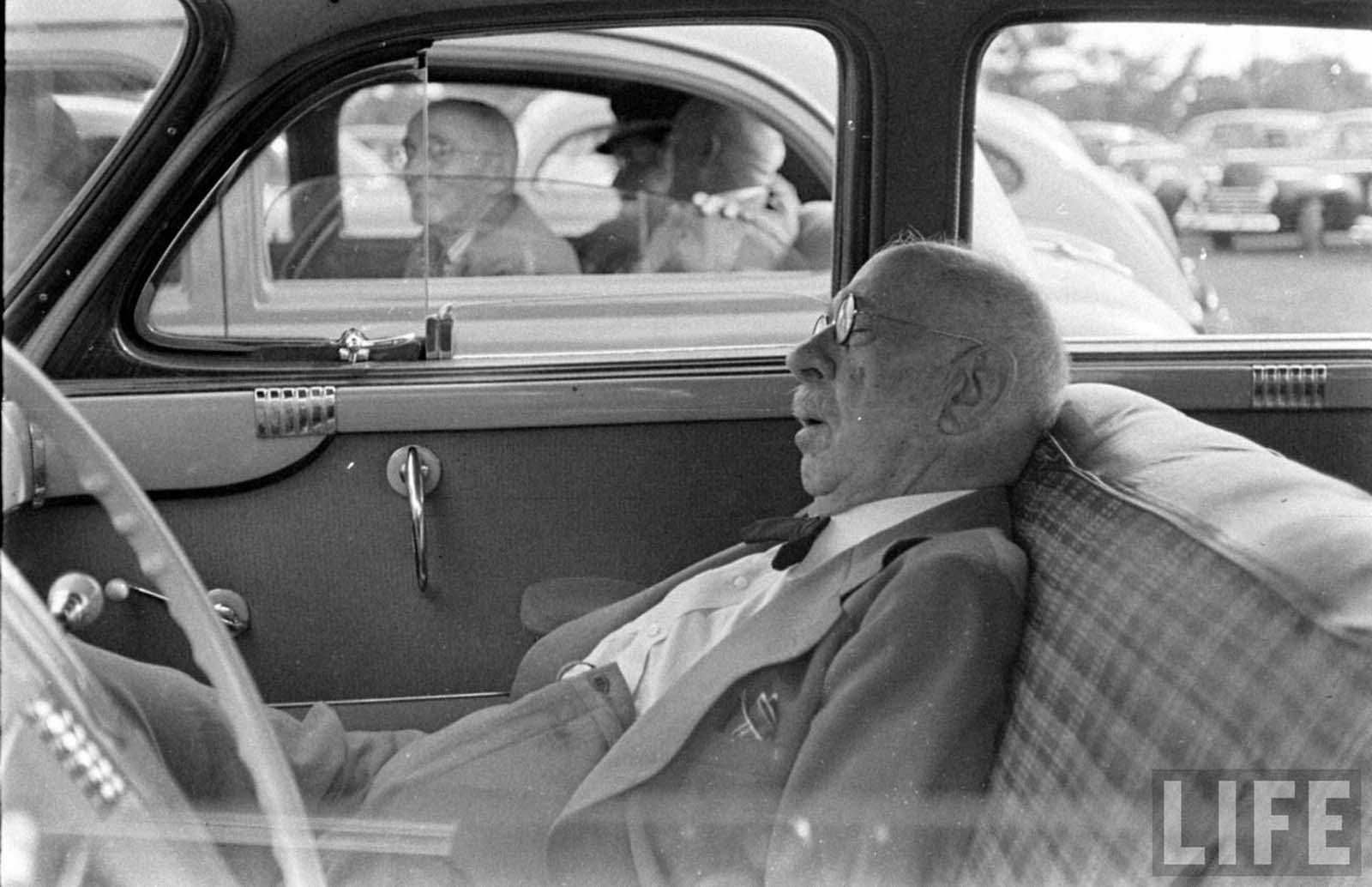