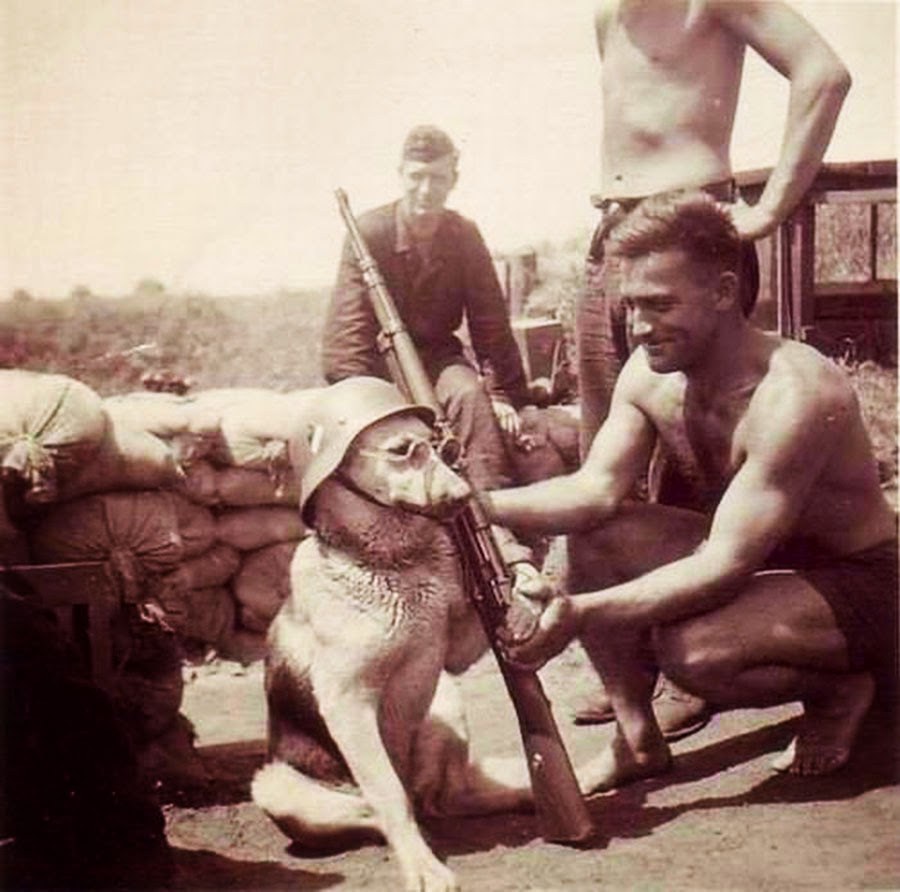 A dog being posed by a German soldier, early 1940′s

At the beginning the war was still fun and the soldiers were not full engaged in action. So they had some fun with this German Shepherd dog, who has no idea what he’s doing. Still looks classy though. Dressing dogs as humans has always been funny.

The Germans viewed canines as being almost as intelligent as humans and attempted to build an army of fearsome ‘speaking’ dogs. Hitler hoped the clever creatures would learn to communicate with their SS masters – and he even had a special dog school set up to teach them to talk. The incredible findings show Nazi officials recruited so-called educated dogs from all over Germany and trained them to speak and tap out signals using their paws.

The Germans hoped to use the animals for the war effort, such as getting them to work alongside the SS and guard concentration camps to free up officers. The bizarre ‘Wooffan SS’ experiment has come to light after years of painstaking research by academic Dr Jan Bondeson into unique and amazing dogs in history. Dr Bonderson, from Cardiff University, visited Berlin to scour obscure periodicals to build up a bizarre – but true – account of Nazi ideas.

Hitler was a well-known dog lover and had two German Shepherds, called Blondi and Bella. He famously killed Blondi moments before committing suicide in his bunker in 1945. The dictator was said to have been keen to use dogs for the war effort and supported the dog school which was called the Tier-Sprechschule ASRA. The school, based in Leutenburg near Hannover and led by headmistress Margarethe Schmitt, was set up in the 1930s and continued throughout the war years.