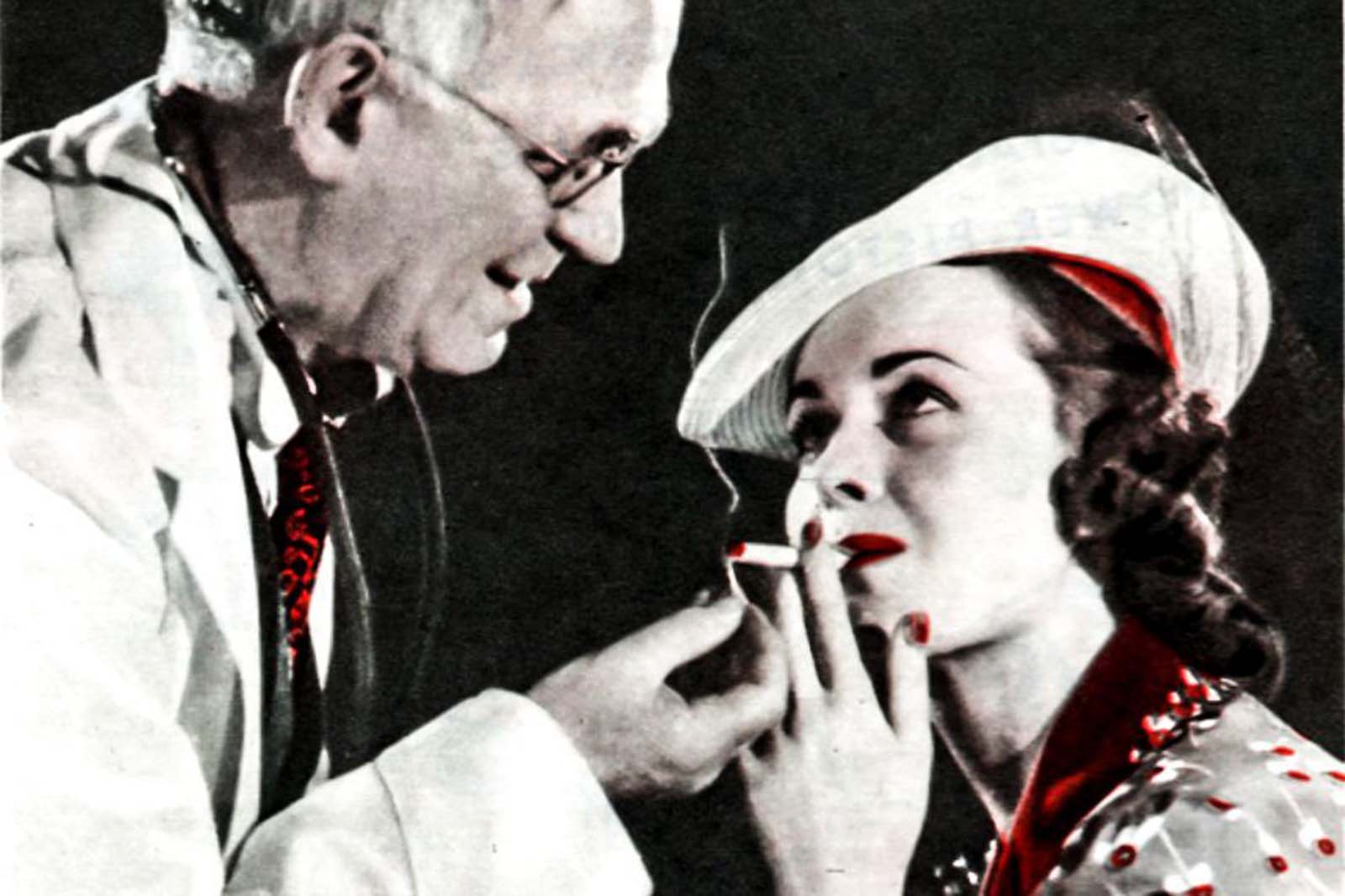 In the grand scope of the history of medicine, the relationship between doctors and patients has changed quite a bit in recent decades. For a long time, physicians were the authority on health.

Patients trusted in their doctors’ education and expertise and, for the most part, followed their advice. When health concerns about cigarettes began to receive public attention, tobacco companies took preemptive action.

From the 1930s to the 1950s, advertising’s most powerful phrase—“doctors recommend”—was paired with the world’s deadliest consumer product. Cigarettes weren’t seen as dangerous then, but they still made smokers cough.

To allay fears, tobacco brands hired throat “doctors” (that is, models dressed in white coats) to explain that dust, germs, or a lack of menthol were to blame, not the cigs themselves. The tobacco companies capitalized on the public’s trust in physicians in order to quell concerns about the dangers of smoking.

During the 1920s, Lucky Strike was the dominant cigarette brand. This brand, made by the American Tobacco Company, was the first to use the image of a physician in its advertisements. “20,679 physicians say ‘Luckies are less irritating,” its advertisements proclaimed.

The advertising firm that promoted Lucky Strikes had sent physicians free cartons of cigarettes and asked them whether Lucky Strikes were less irritating to ‘sensitive and tender’ throats. The company claimed that its toasting process made its cigarettes a smoother smoke. 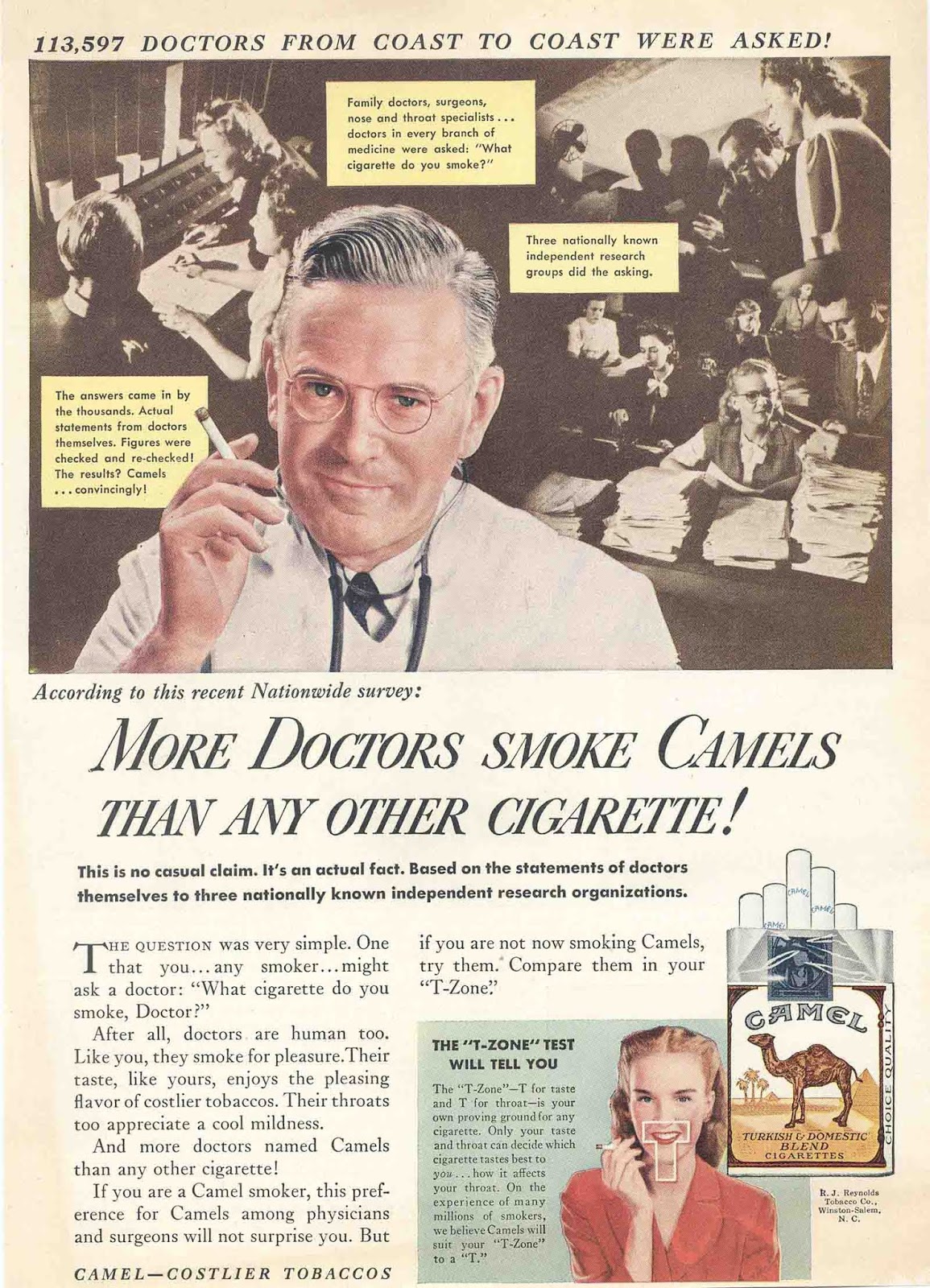 By the mid-1930s, Lucky Strike had some competition. A new advertising campaign for Philip Morris referred to research conducted by physicians. One ad claimed that after prescribing Philip Morris brand cigarettes to patients with irritated throats, “every case of irritation cleared completely or definitely improved.”

This series of advertisements, along with others referring to “proof” of superiority, made Philip Morris a major cigarette brand for the first time in its history.

One of the most famous campaigns of this era was the “More Doctors” campaign for RJ Reynolds Tobacco Company’s Camels brand cigarettes. These ads, which appeared in magazines from Time to Ladies’ Home Journal, claimed that according to a nationwide survey, “More doctors smoke Camels than any other cigarette!” These ads pictured doctors in labs, sitting back at their desks or speaking with patients.

Physicians were also not immune to the addiction of cigarettes and tobacco products and tobacco companies knew it. Many physicians still doubted that there was a widespread connection between smoking and disease. Instead, it was believed that only certain individuals’ health was affected by smoking; it was thought to be a case-by-case situation.

Tobacco companies targeted this thought process by telling physicians that if patients are going to smoke cigarettes regardless of what was advised for their health, at least prescribe for them a ‘healthier’ brand of cigarettes. 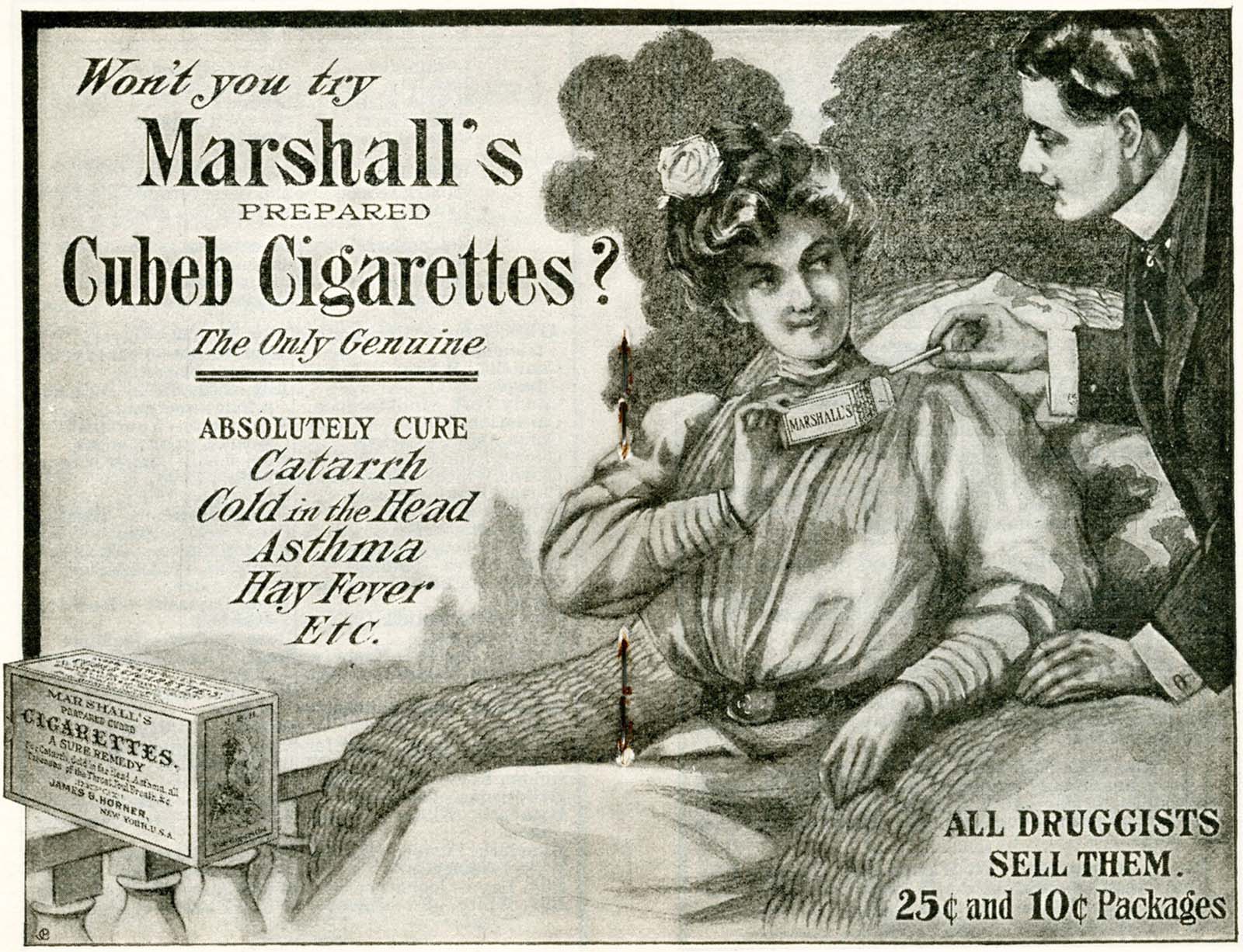 In the late 1940s and early 1950s, a transition began to appear in these ads. Advertisements for Camels began to incorporate a ‘try it for yourself’ approach.

Although the ads still pictured physicians proclaiming cigarettes to be less irritating, they also now encouraged consumers to test the cigarettes themselves: “The test was really fun! Every Camel tasted so good! And I didn’t need my doctor’s report to know Camels are mild!”.

But it was only a matter of time until science caught up to the advertising. By the mid-1950s more research was being published that confirmed a link between tobacco products and lung cancer. Growing concerns among the public about the dangers of smoking cigarettes meant the slow disappearance of the ‘physician’ from cigarette ads.

Tobacco ads on television and radio were banned in 1971, and the Master Settlement Agreement in 1998 curtailed other forms of tobacco advertisement.

Tobacco companies can still advertise in print publications, although there are far more restrictions for those today. Health claims are out of the question. 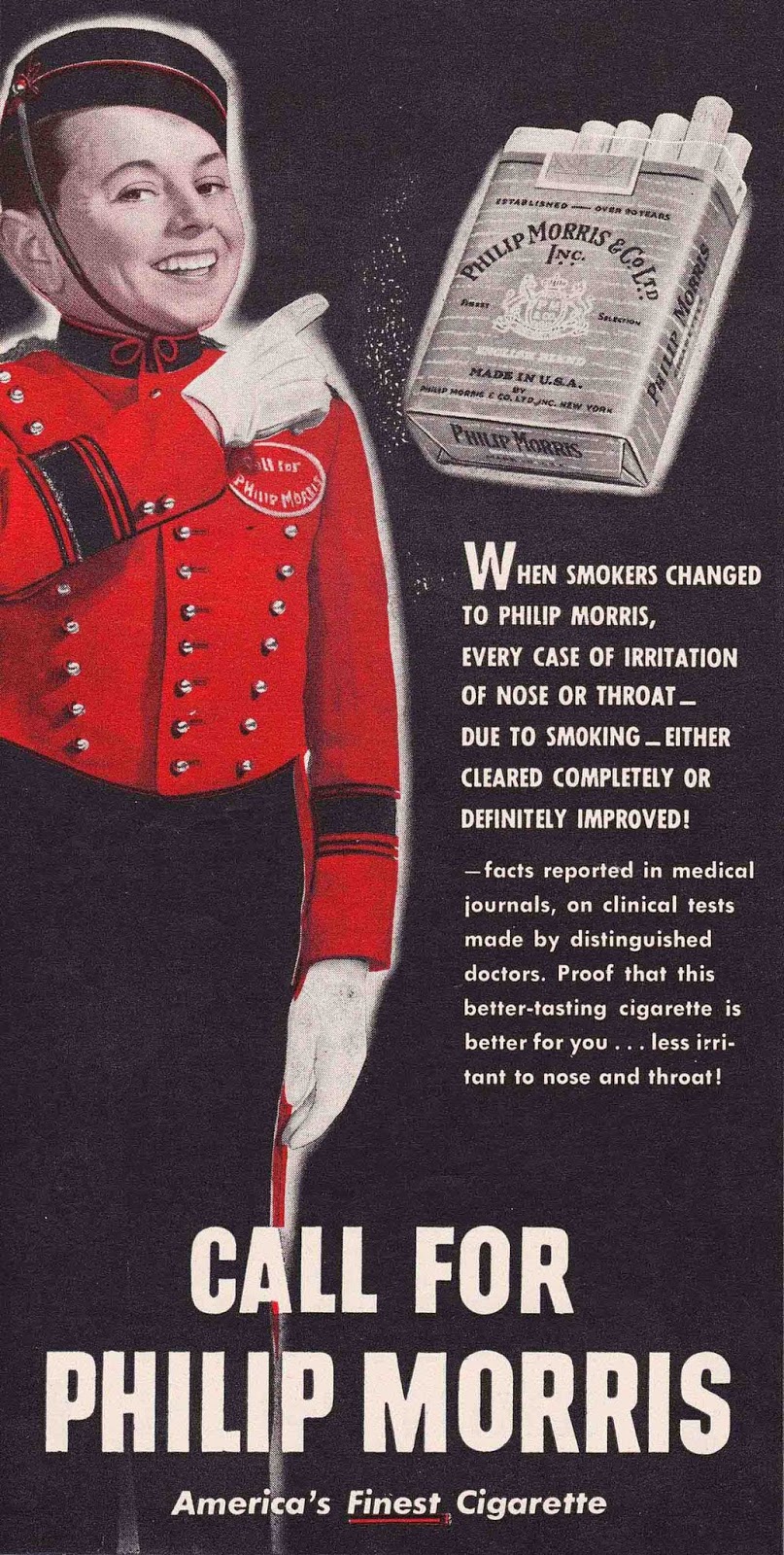 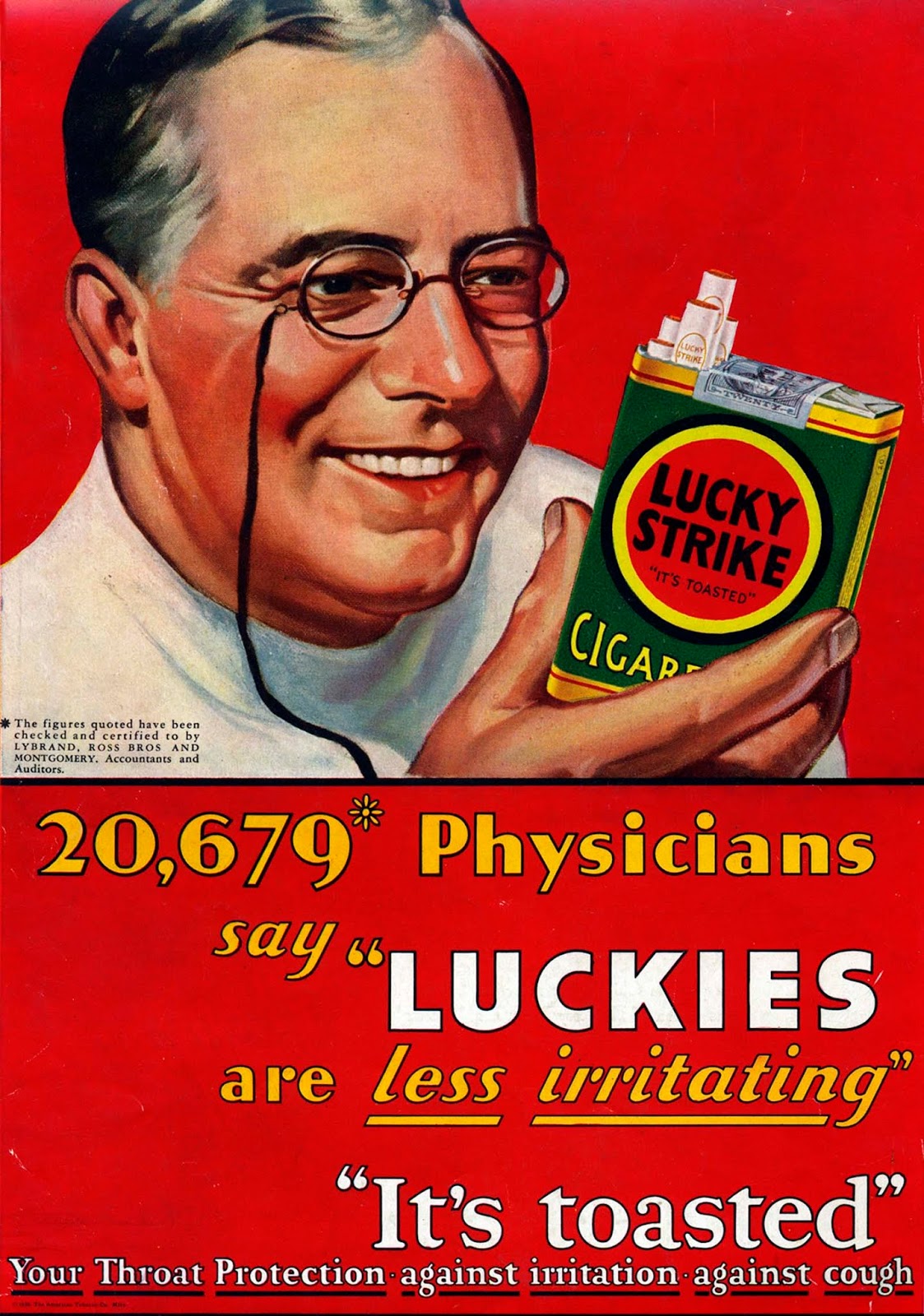 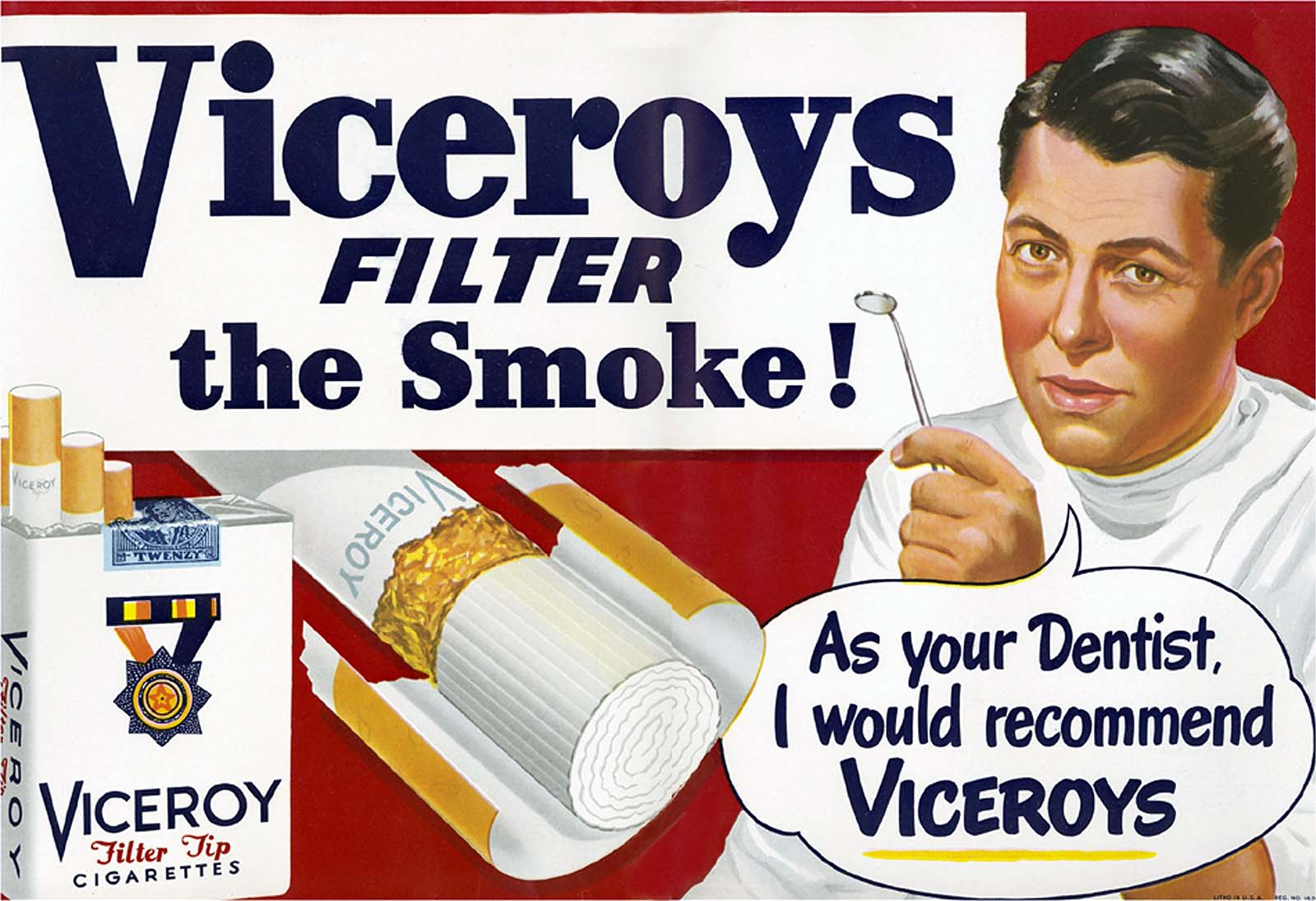 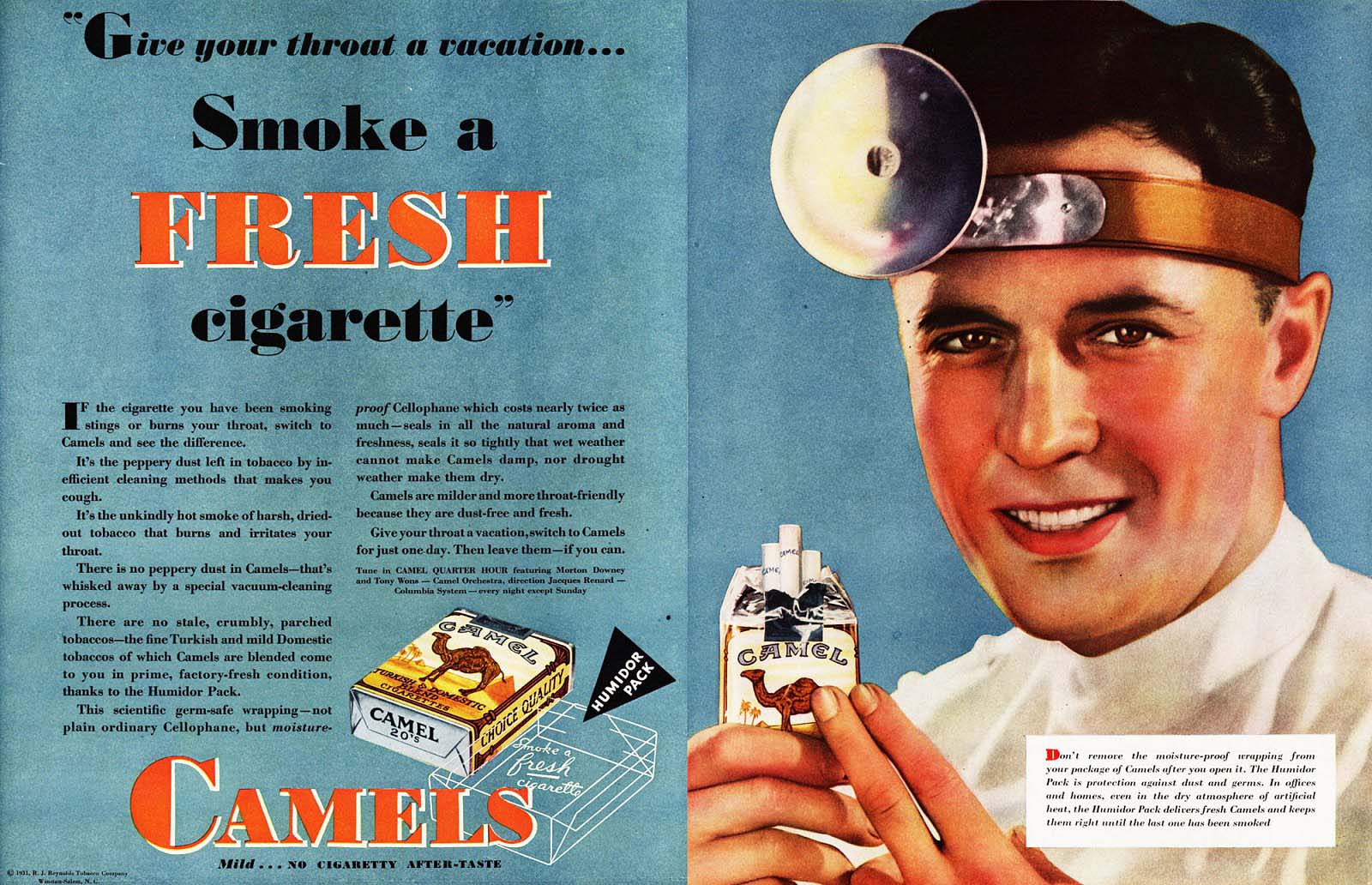 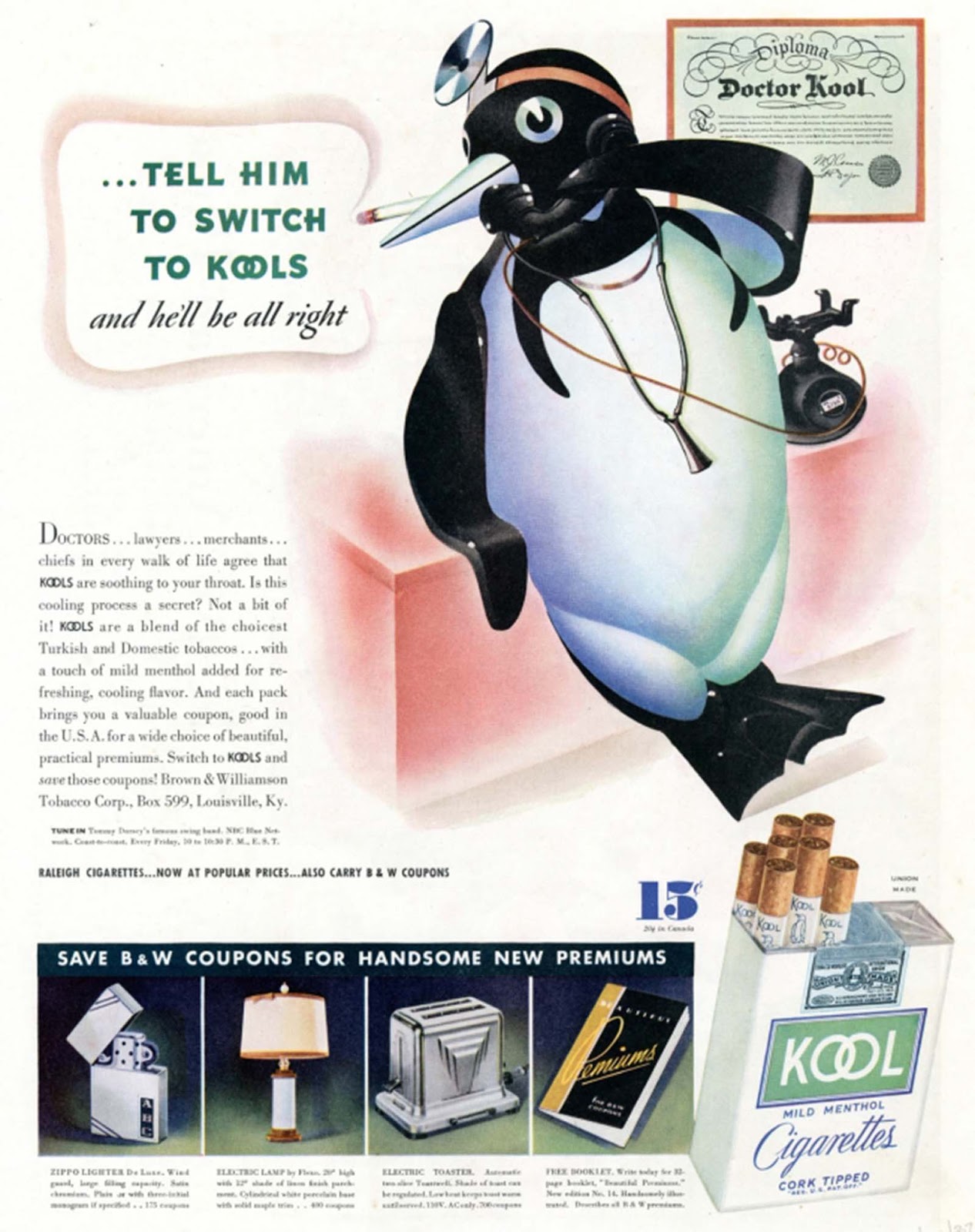 Kool’s penguin poses as an otolaryngologist in this 1938 ad. The brand made the case that its cigarettes actually soothed the throat. 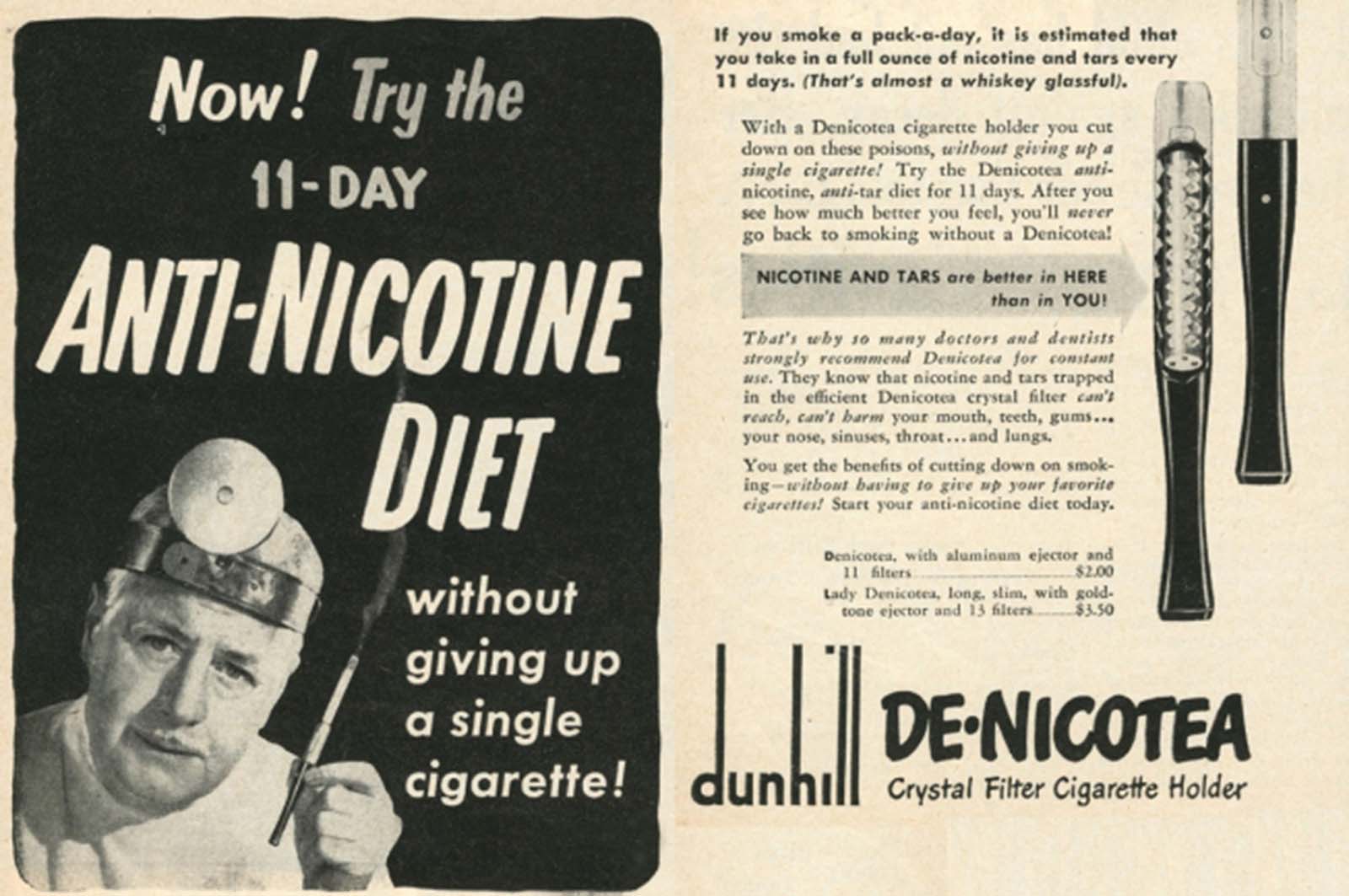 Meet a medical miracle from 1948: the crystal filter. Dunhill’s ad calls nicotine a poison, but asserts that with this device, you can protect yourself “without giving up a single cigarette!” 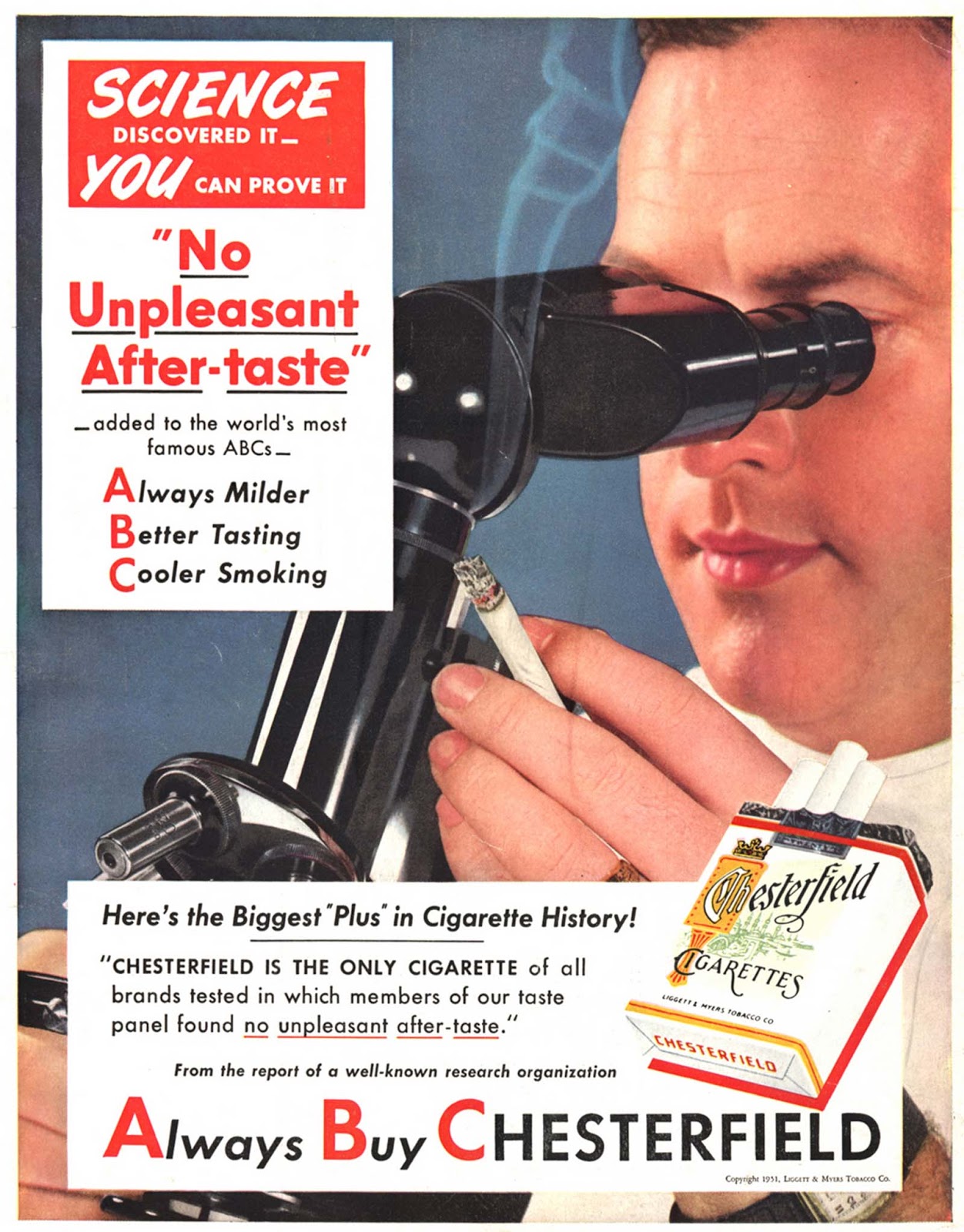