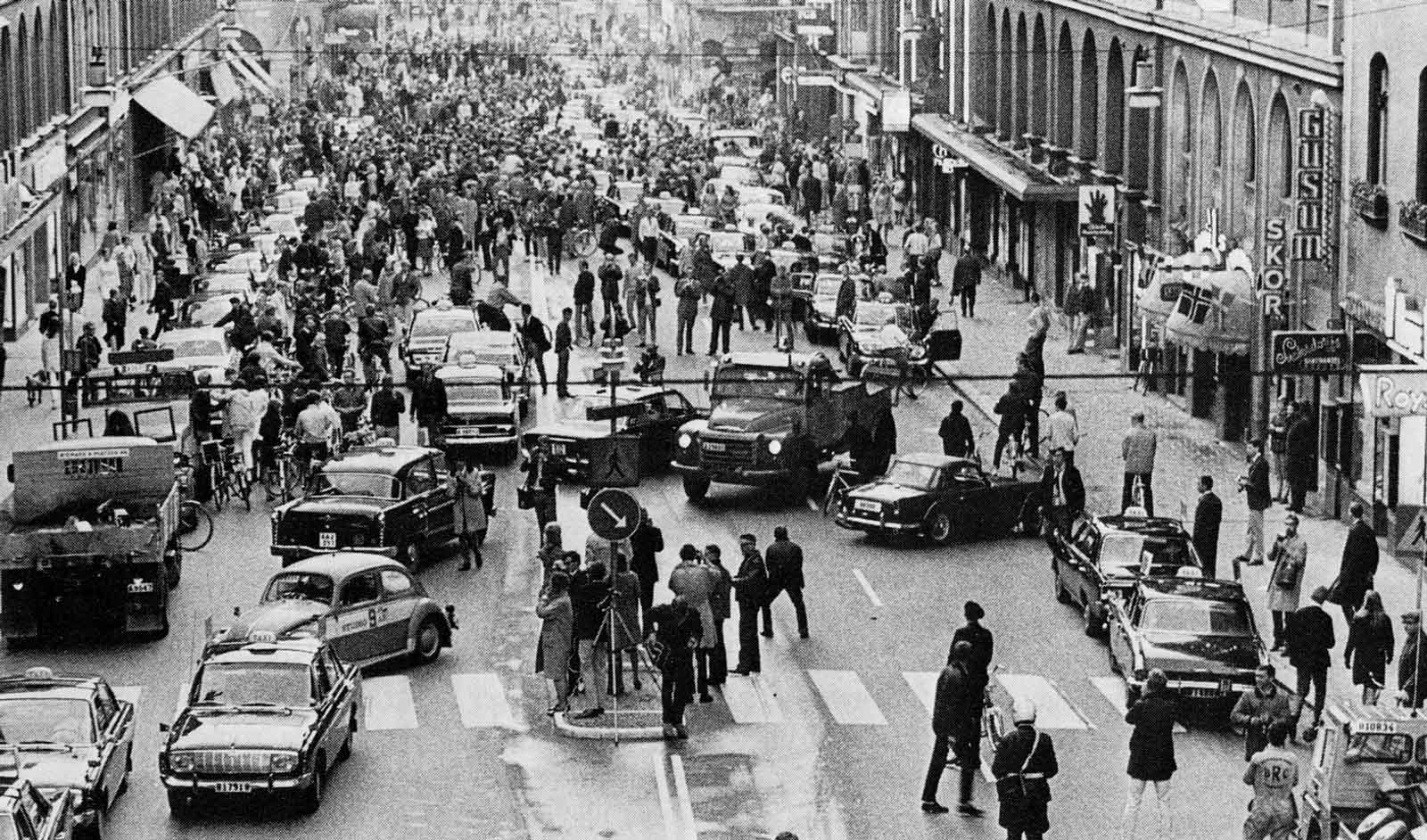 Dagen H (H day) was the day, 3 September 1967, on which traffic in Sweden switched from driving on the left-hand side of the road to the right. The “H” stands for “Högertrafik”, the Swedish word for “right traffic”.

Initially, the usage of American cars (with drivers positioned on the left side of the vehicle) in left-hand traffic was advantageous to early drivers. It allowed them to negotiate the tight squeezes past oncoming traffic by paying close attention to the underdeveloped left shoulders of the country’s old roads.

By the 1950s and 1960s, increased auto traffic and more developed roads created dangerous overtaking situations due to the mismatch of left-hand roads and American-style left-side drive.

Therefore, the Swedes implemented a switch in the name of logic, safety, and consistency with their Scandinavian and continental counterparts. 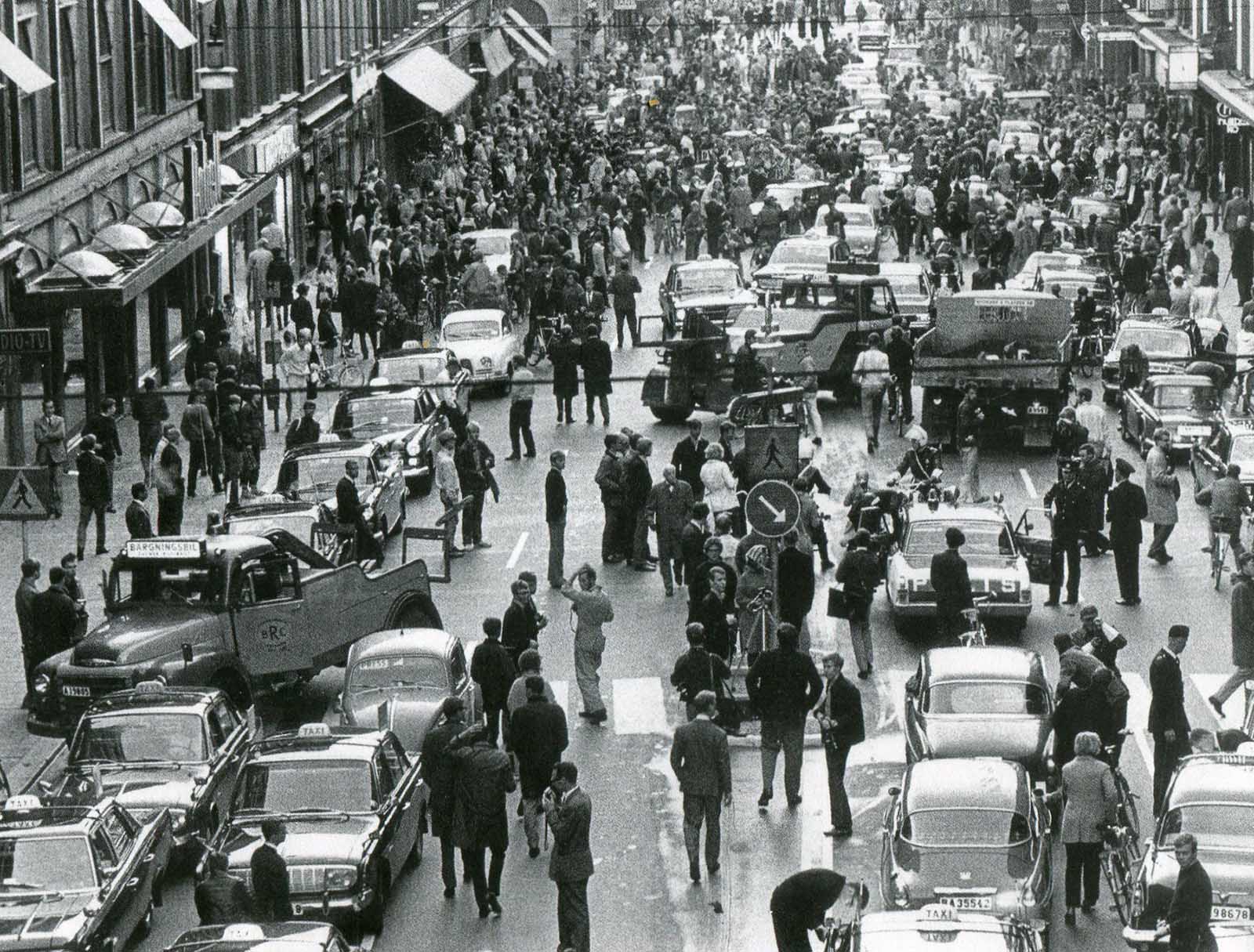 The change was widely unpopular; in a 1955 referendum, 83 percent voted to keep driving on the left. 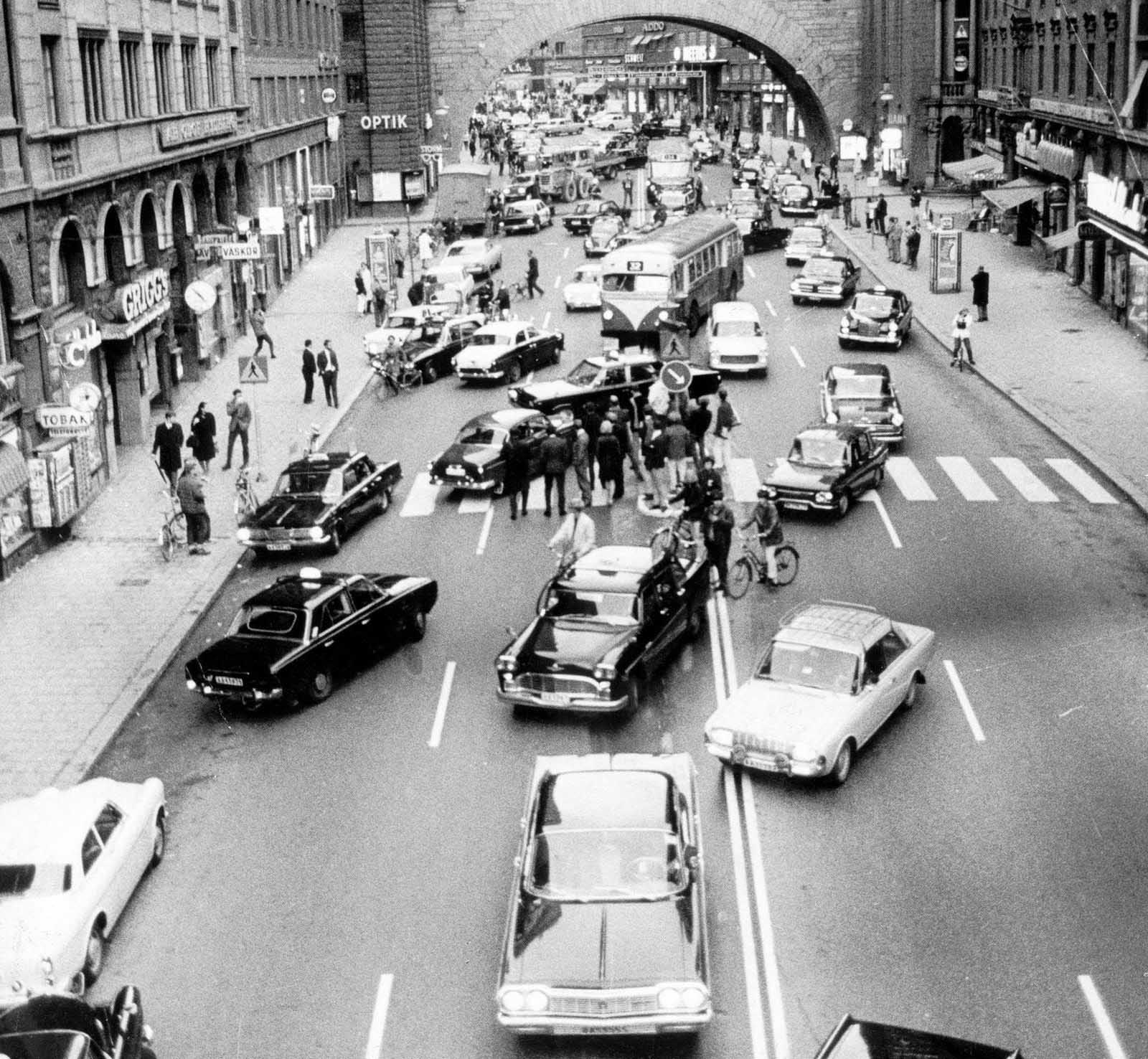 As Dagen H neared, every intersection was equipped with an extra set of poles and traffic signals wrapped in black plastic. Workers roamed the streets early in the morning on Dagen H to remove the plastic.

A body known as Statens Högertrafikkommission (HTK) (“the state right-hand traffic commission”) was established to oversee the changeover. It also began implementing a four-year education program, with the advice of psychologists.

A national campaign of persuasion was begun, and the Dagen H logo was soon emblazoned on milk cartons, shorts, and even women’s underwear.

A girl with the Dagen H logo on her underwear.

On Dagen H, Sunday, 3 September, all non-essential traffic was banned from the roads from 01:00 to 06:00. Any vehicles on the roads during that time had to follow special rules.

All vehicles had to come to a complete stop at 04:50, then carefully change to the right-hand side of the road and stop again before being allowed to proceed at 05:00.

Roads, crossings, roundabouts, flyovers, etc had already been redesigned and some 360,000 road signs were changed during the night. The date had also been preceded by an intensive national campaign, informing people about what was going to happen that day.

Some 130,000 reminder signs had been put up everywhere along streets and roads, and most cars had an H-sticker on the dashboard in front of the driver in order to remind him or her.

Very few cars in Sweden were right-hand drive at the time, despite the fact that Swedish road users had been living with left-side traffic for 233 years.

Left-hand traffic in Stockholm in 1966.

On the day of the change, only 157 minor accidents were reported, of which only 32 involved personal injuries, with only a handful serious.

On the Monday following Dagen H, there were 125 reported traffic accidents, compared to a range of 130 to 198 for previous Mondays, none of them fatal.

Experts suggested that changing to driving on the right reduced accidents while overtaking, as people already drove left-hand drive vehicles, thereby having a better view of the road ahead; additionally, the change made a marked surge in perceived risk that exceeded the target level and thus was followed by very cautious behavior that caused a major decrease in road fatalities.

Indeed, fatal car-to-car and car-to-pedestrian accidents dropped sharply as a result, and the number of motor insurance claims went down by 40%.

Headlamp sold in Sweden not long before Dagen H. Opaque decal blocks the lens portion that would provide low beam upkick to the right, and bears warning “Not to be removed before 3 September 1967”.