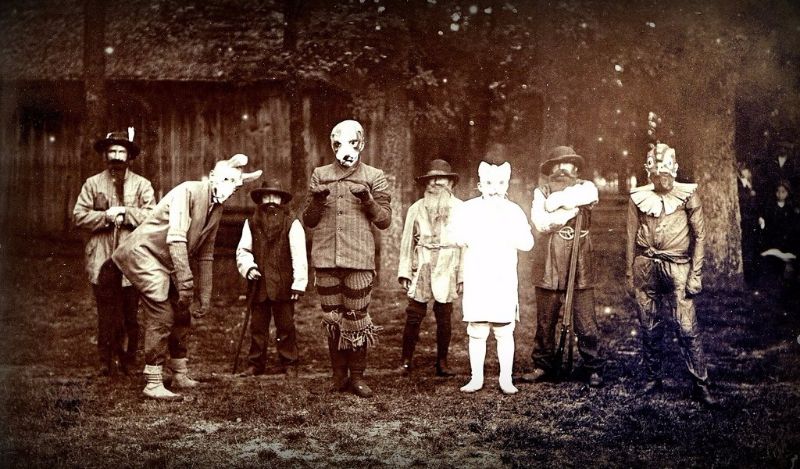 It has to be said that these vintage photos were taken using much less sensitive cameras, so the pictures look already gloomy and eerie, regardless of the content.

Halloween, contraction of All Hallows’ Eve, marks the day before the Western Christian feast of All Saints and initiates the season of Allhallowtide, which lasts three days and concludes with All Souls’ Day.

In much of Europe and most of North America, observance of Halloween is largely nonreligious. Halloween is celebrated on October 31st. 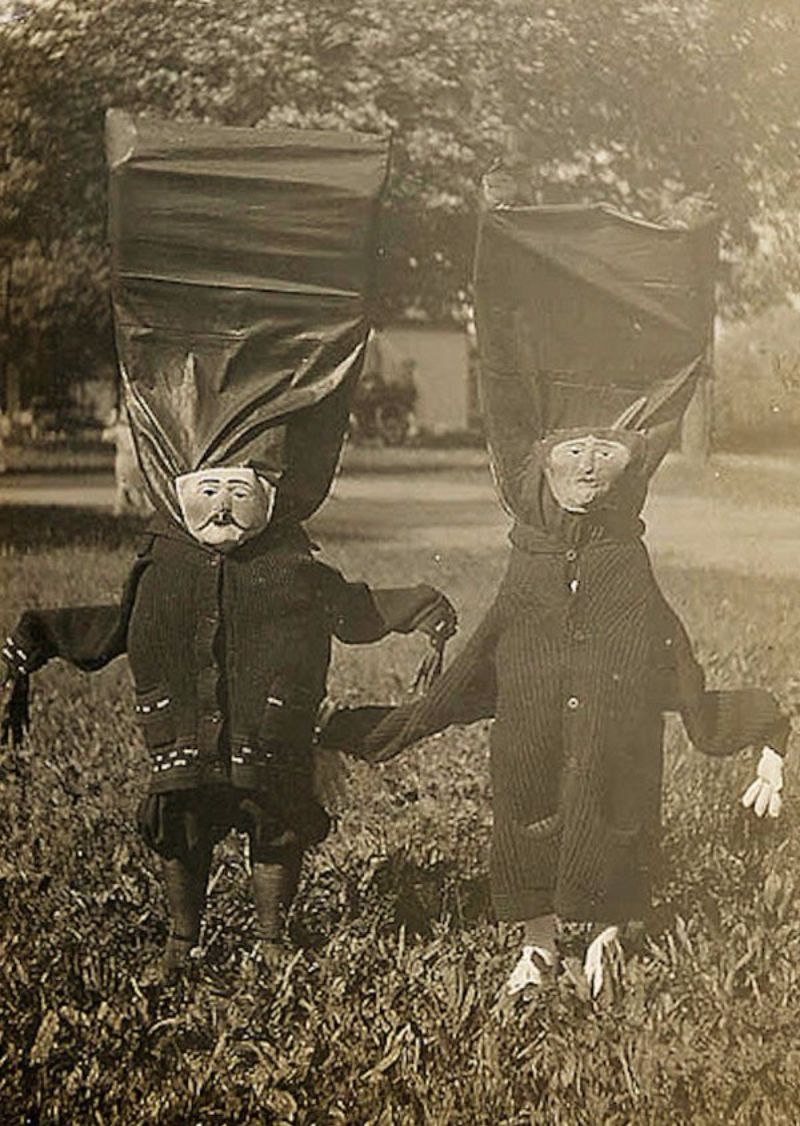 Halloween had its origins in the festival of Samhain among the Celts of ancient Britain and Ireland. On the day corresponding to November 1 on contemporary calendars, the new year was believed to begin.

That date was considered the beginning of the winter period, the date on which the herds were returned from pasture and land tenures were renewed.

People set bonfires on hilltops for relighting their hearth fires for the winter and to frighten away evil spirits, and they sometimes wore masks and other disguises to avoid being recognized by the ghosts thought to be present.

It was in those ways that beings such as witches, hobgoblins, fairies, and demons came to be associated with the day. The period was also thought to be favorable for divination on matters such as marriage, health, and death.

When the Romans conquered the Celts in the 1st century CE, they added their own festivals of Feralia, commemorating the passing of the dead, and of Pomona, the goddess of the harvest. 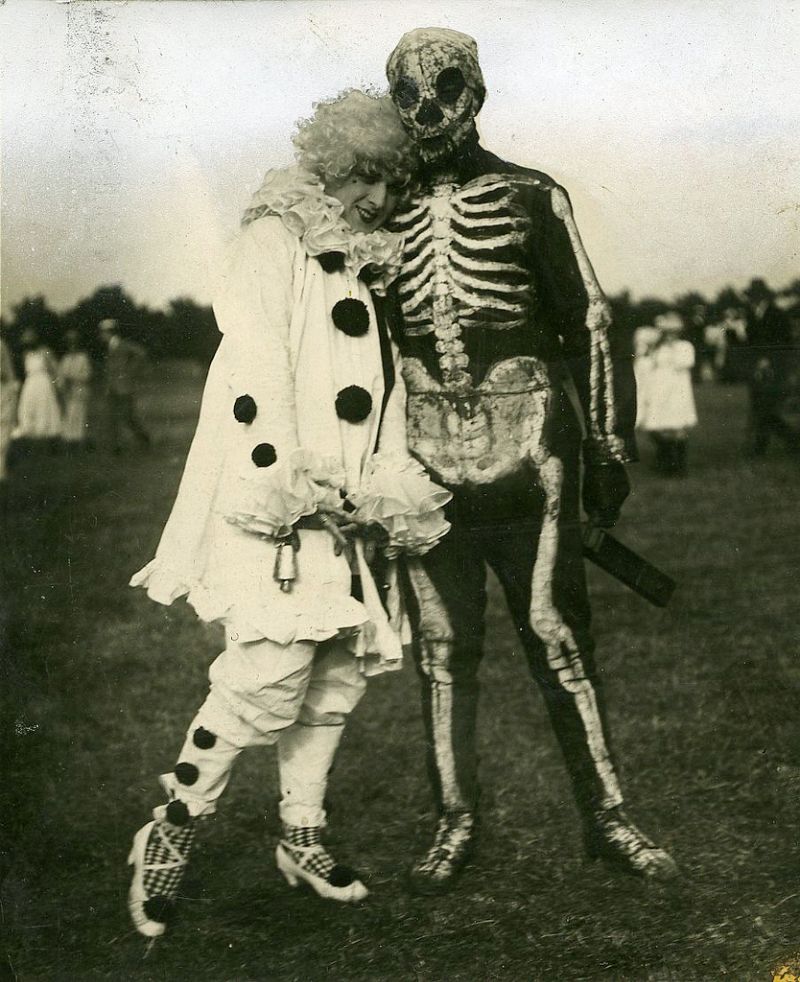 Some people practice the Christian religious observances of All Hallows’ Eve, including attending church services and lighting candles on the graves of the dead, although it is a secular celebration for others.

Some Christians historically abstained from meat on All Hallows’ Eve, a tradition reflected in the eating of certain vegetarian foods on this vigil day, including apples, potato pancakes, and soul cakes. 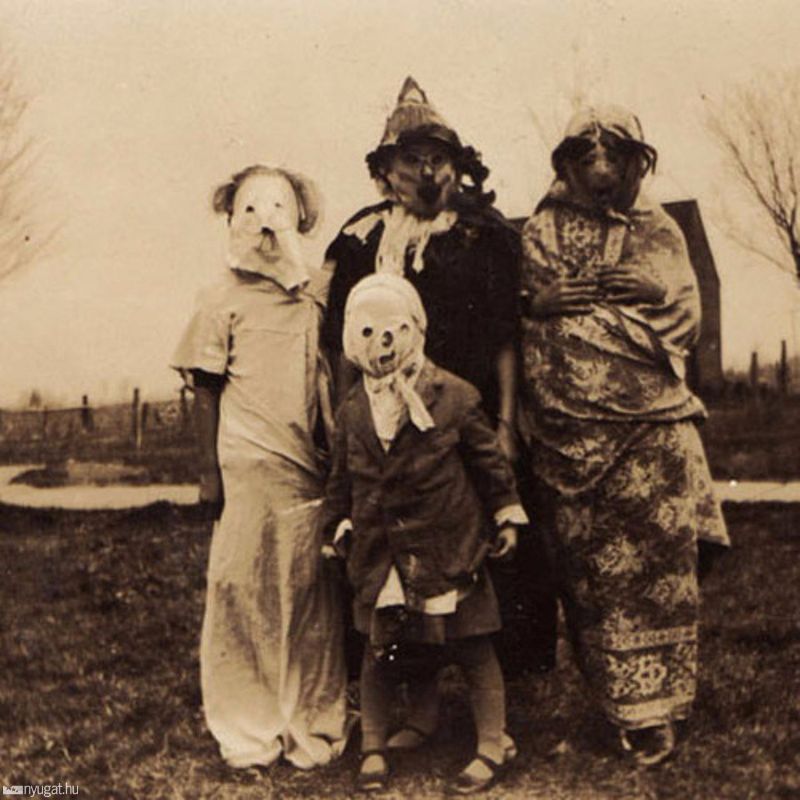 Over time, the costume selection extended to include popular characters from fiction, celebrities, and generic archetypes such as ninjas and princesses.

Dressing up in costumes and going “guising” was prevalent in Scotland and Ireland at Halloween by the late 19th century. A Scottish term, the tradition is called “guising” because of the disguises or costumes worn by the children.

In Ireland the masks are known as ‘false faces’. Costuming became popular for Halloween parties in the US in the early 20th century, as often for adults as for children, and when trick-or-treating was becoming popular in Canada and the US in the 1920s and 1930s.

Eddie J. Smith, in his book Halloween, Hallowed is Thy Name, offers a religious perspective to the wearing of costumes on All Hallows’ Eve, suggesting that by dressing up as creatures “who at one time caused us to fear and tremble”, people are able to poke fun at Satan “whose kingdom has been plundered by our Saviour”. Images of skeletons and the dead are traditional decorations used as memento mori. 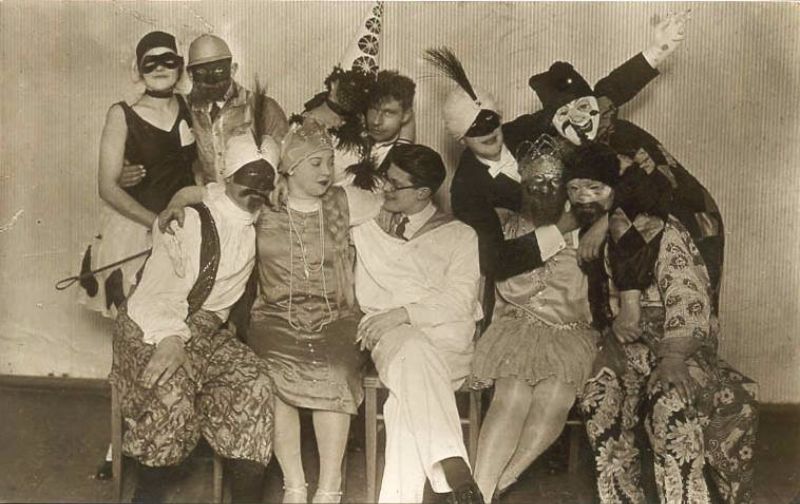 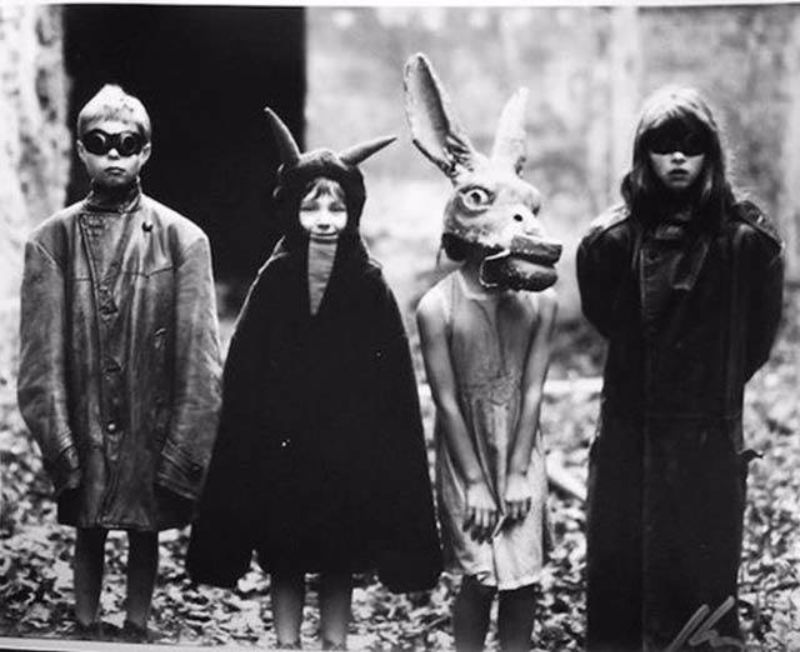 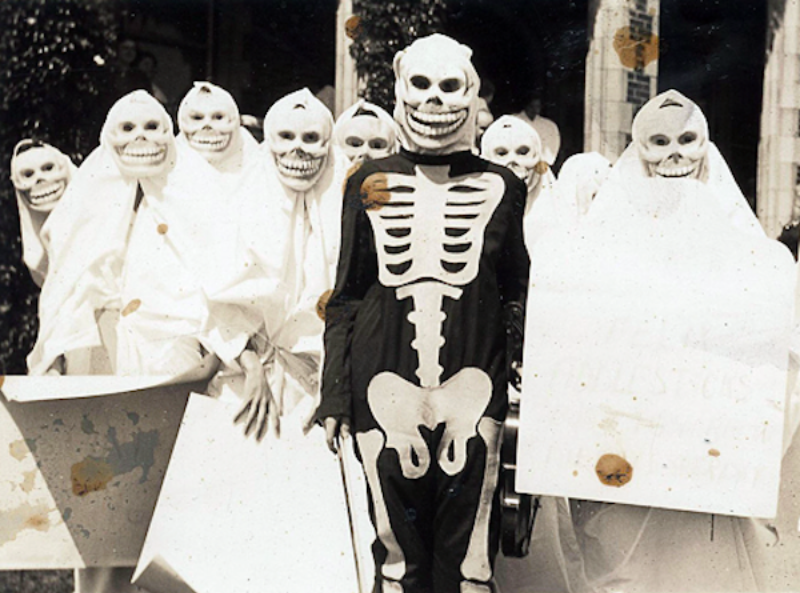 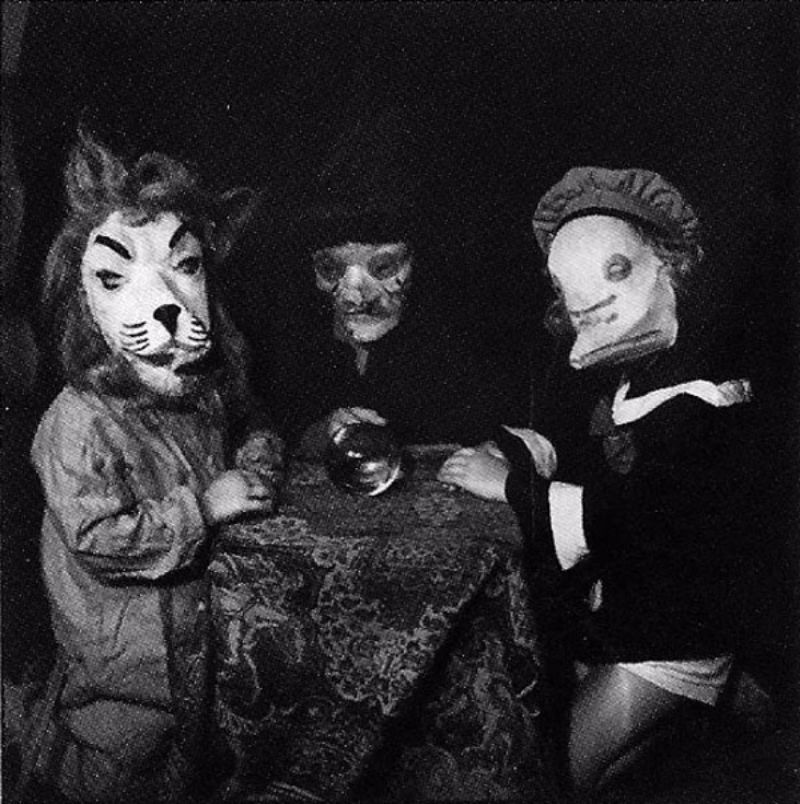 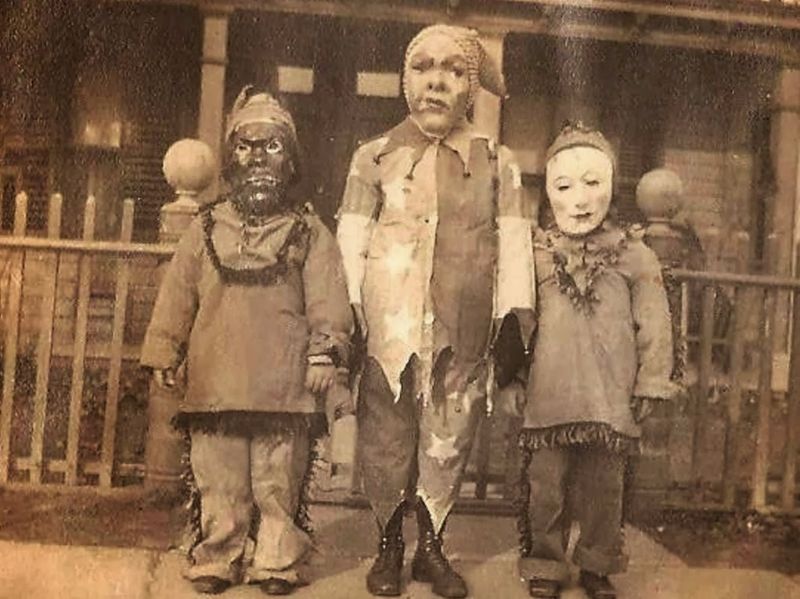 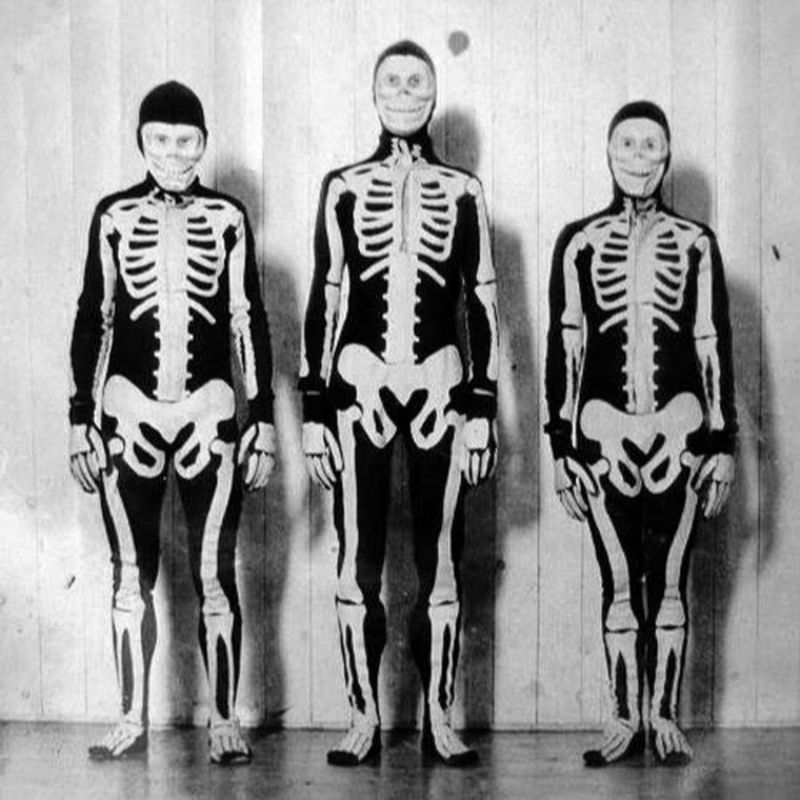 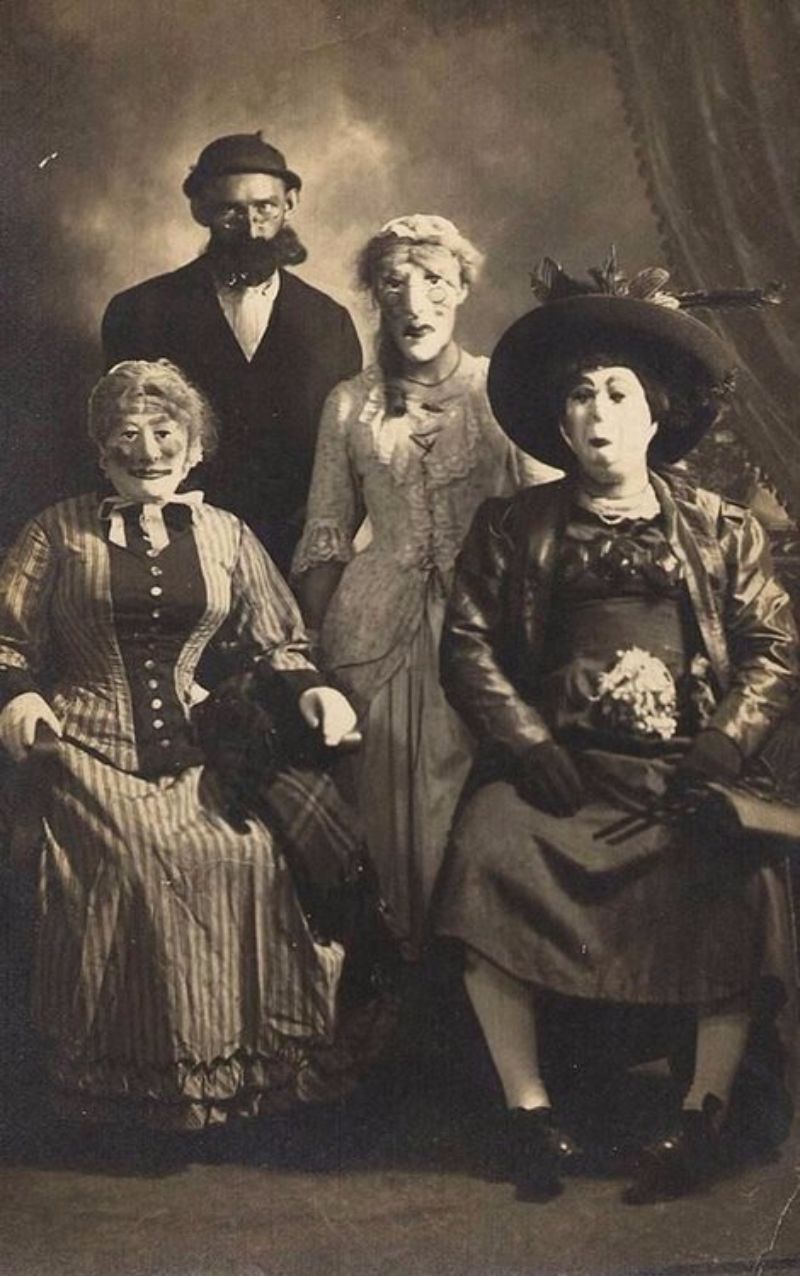 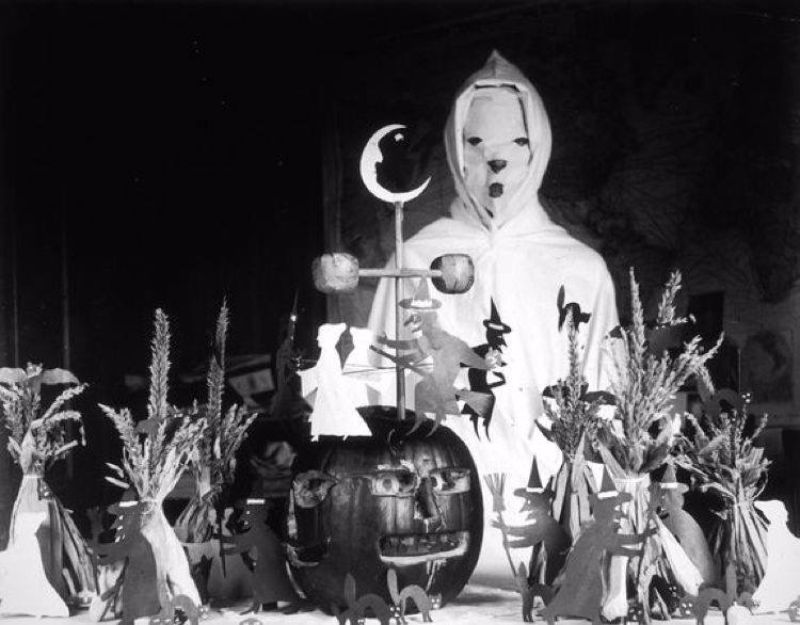 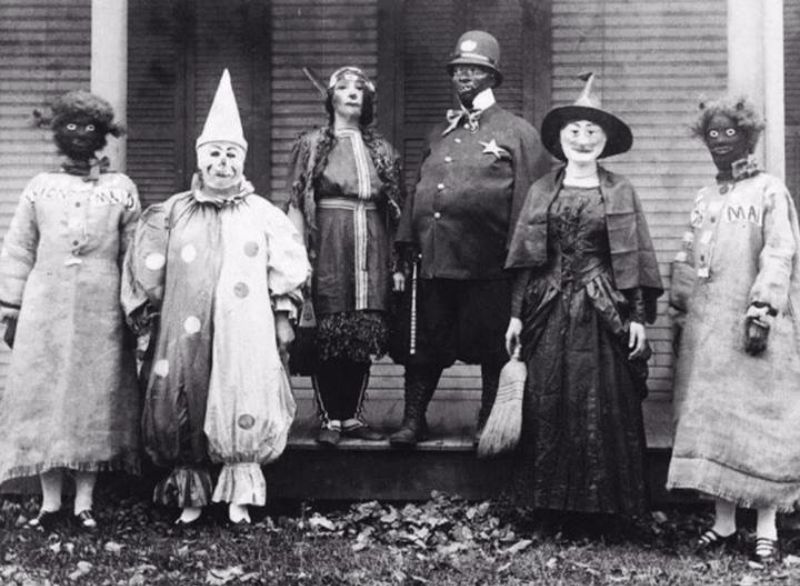 Man dressed as a baby.

Man in a strange clown costume.