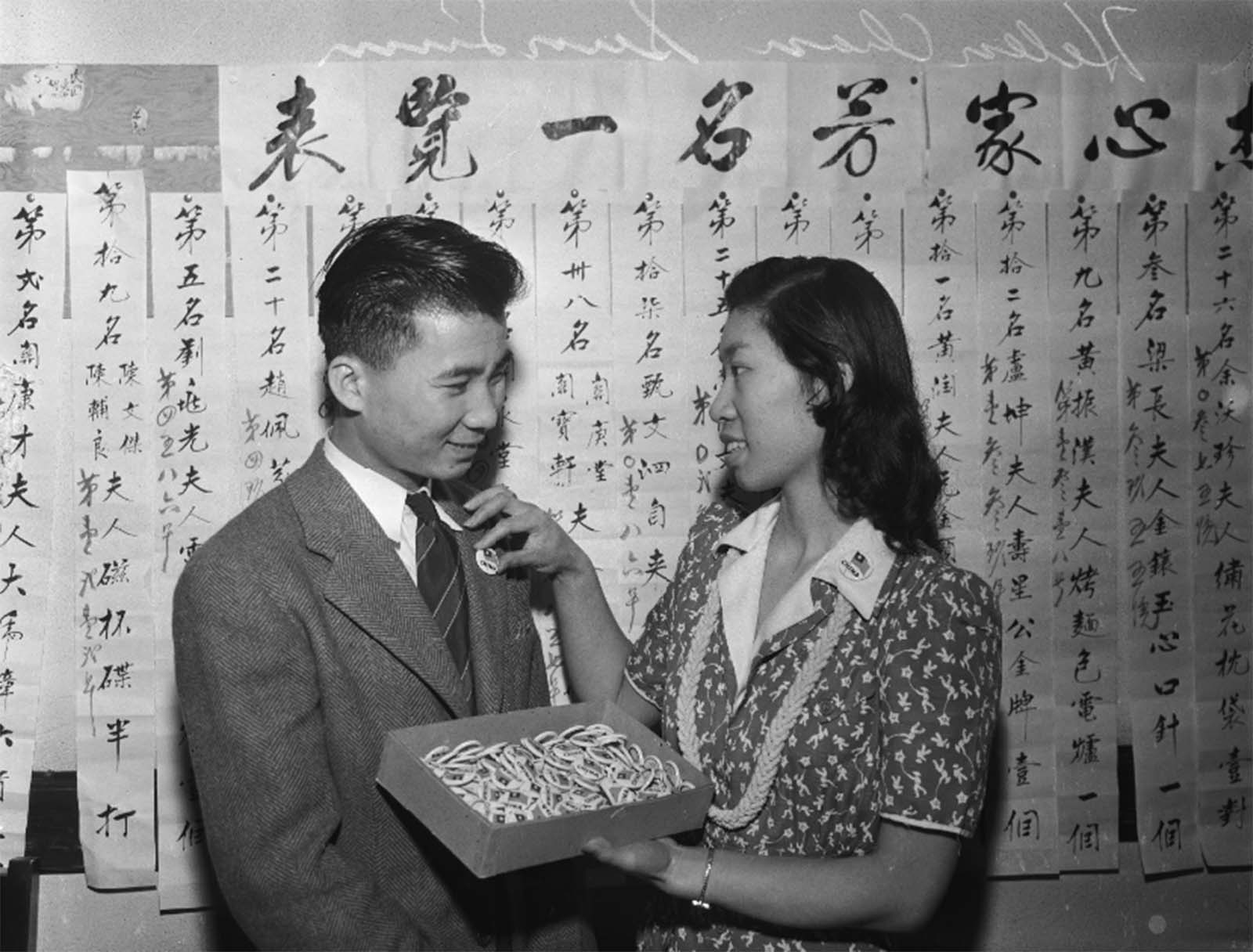 Helen Chan pins Sun Lum with lapel badge identifying him as “Chinese,” to avoid being rounded up with Japanese Americans who were being interred following Japan’s attack on Pearl Harbor.

World War II brought momentous change to America’s Chinese community. For decades, the Chinese were vilified in America, especially in California, the center of the U.S.’s anti-Chinese feelings.

The Chinese had initially come to California for the Gold Rush and later the building of the Transcontinental Railroad, but public sentiment quickly turned against them.

Competition for jobs and depression in the 1870s all led to a racist backlash against the Chinese. Eventually, Chinese immigration was ended with the 1882 Chinese Exclusion Act. The Chinese in America found themselves a hated minority segregated in Chinatowns. The attack on Pearl Harbor on Dec. 7, 1941, changed all of that.

After Pearl Harbor perceptions of China and Chinese Americans were suddenly transformed. China went from being known as the “sick man of Asia” to a vital ally in the United States’ war against the Japanese.

Likewise, the Chinese went from the “heathen Chinese” to friends. In 1943 a congressman said if not for December 7, America might have never known how good Chinese Americans were.

Motivated by fear and indignation, Chinese Americans also tried to distinguish themselves as much as possible from the Japanese and “prove their undivided loyalty to the American war effort”.

Mere days after Pearl Harbor, the Chinese consulate in San Francisco started issuing identification cards, and Chinese Americans began wearing buttons and badges with phrases like “I am Chinese” on them.

Hoping to prove their loyalty to the United States beyond any doubt, Chinese periodicals also adopted the inflammatory anti-Japanese rhetoric and racial epithets used by the mainstream press. 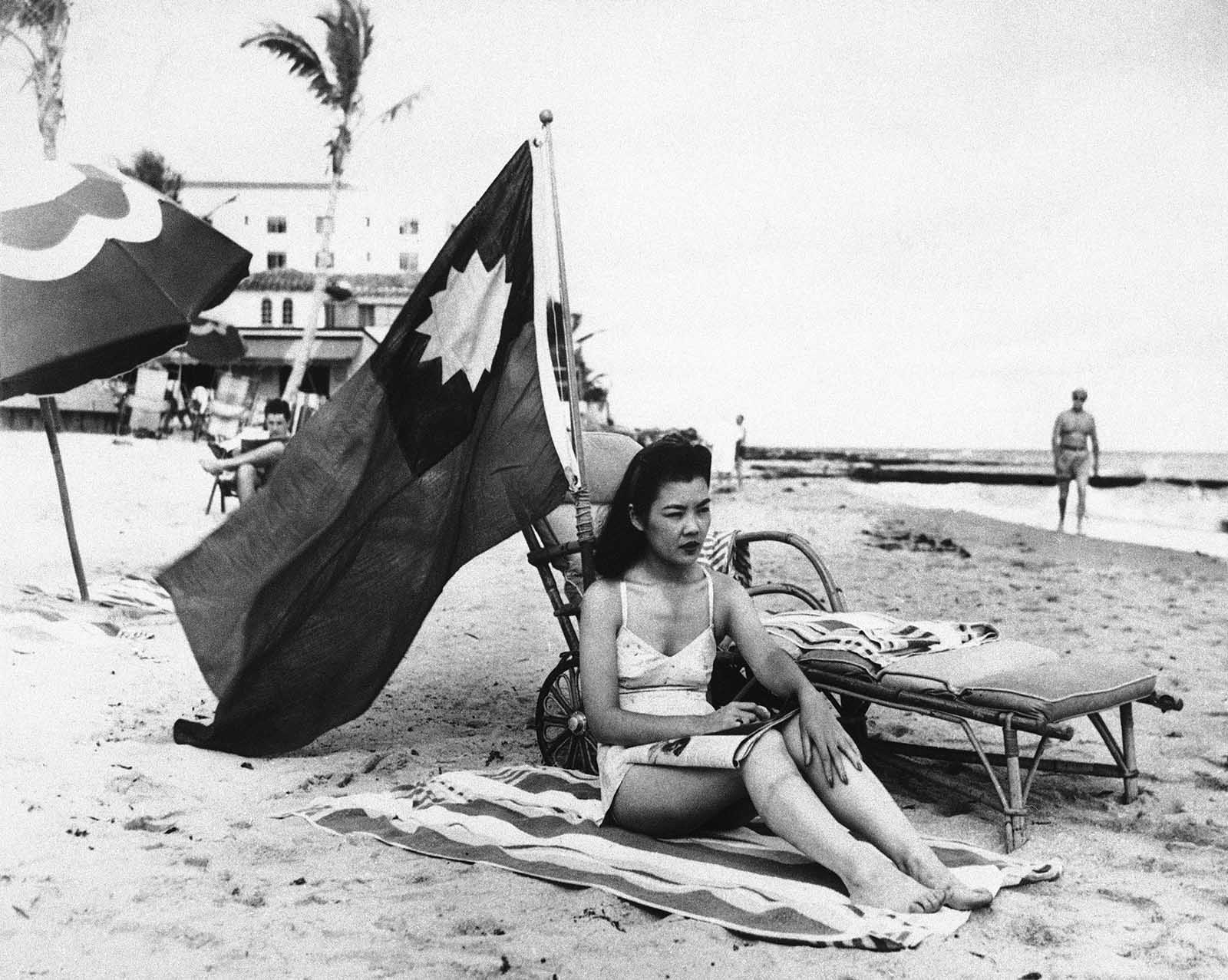 Ruth Lee, a hostess at a Chinese restaurant, flies a Chinese flag so she isn’t mistaken for Japanese when she sunbathes on her days off in Miami, in the wake of the attack on Pearl Harbor, Dec. 15, 1941. The flag shown here is the flag of Nationalist China which went into self-imposed exile to the island of Taiwan after the Communist revolution. This flag is now the flag of Taiwan.

Although there was some sentiment of pan-Asian solidarity, it was definitely not the norm. Chinese Americans, fueled by anger at Japanese aggression in their home country, their American patriotism, and their desire to be seen as American patriots, were, consciously or not, complicit in the persecution of their Japanese neighbors.

The internment of the Japanese was more or less ignored by the Chinese community, with the exception of a few individuals. In fact, Chinese periodicals also participated in spreading the belief that Japanese Americans were guilty of treason or aiding Japan.

And when the Japanese were removed from their farm jobs, the United States Employment Service issued a call for Chinese Americans to replace them. 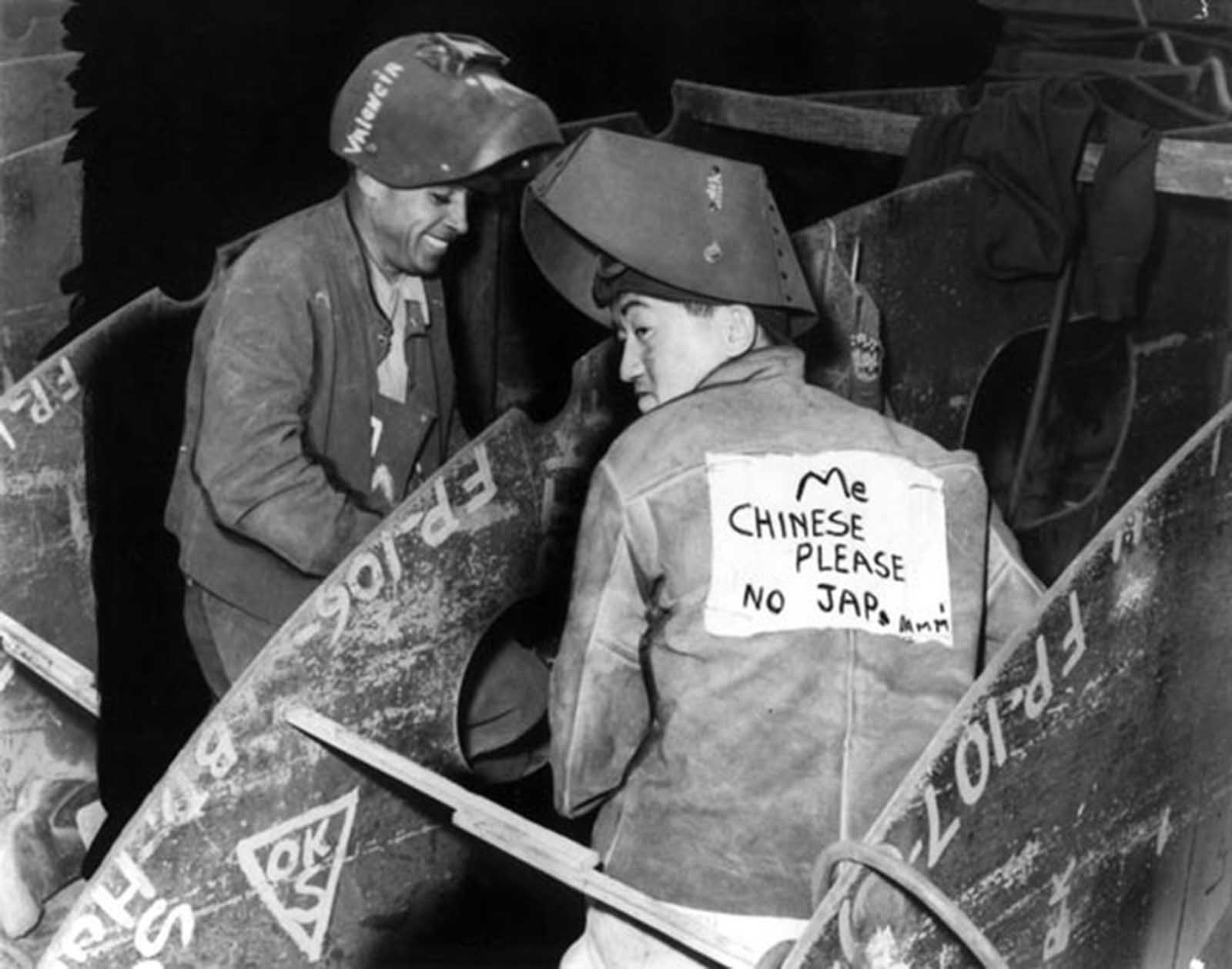 “Me Chinese Please, No Japanese”.

World War II was an opportunity for the Chinese to gain economic and social standing in mainstream American society; however, the shift in white America’s perceptions of the Chinese Americans must also be remembered as a consequence of racist attitudes directed towards the Japanese Americans and the ensuing internment of a whole ethnicity.

Tides quickly shifted after World War II, when the United States declared another war, this time on communism. Power, given rather suddenly to the Chinese during the war, was just as quickly taken away afterwards.