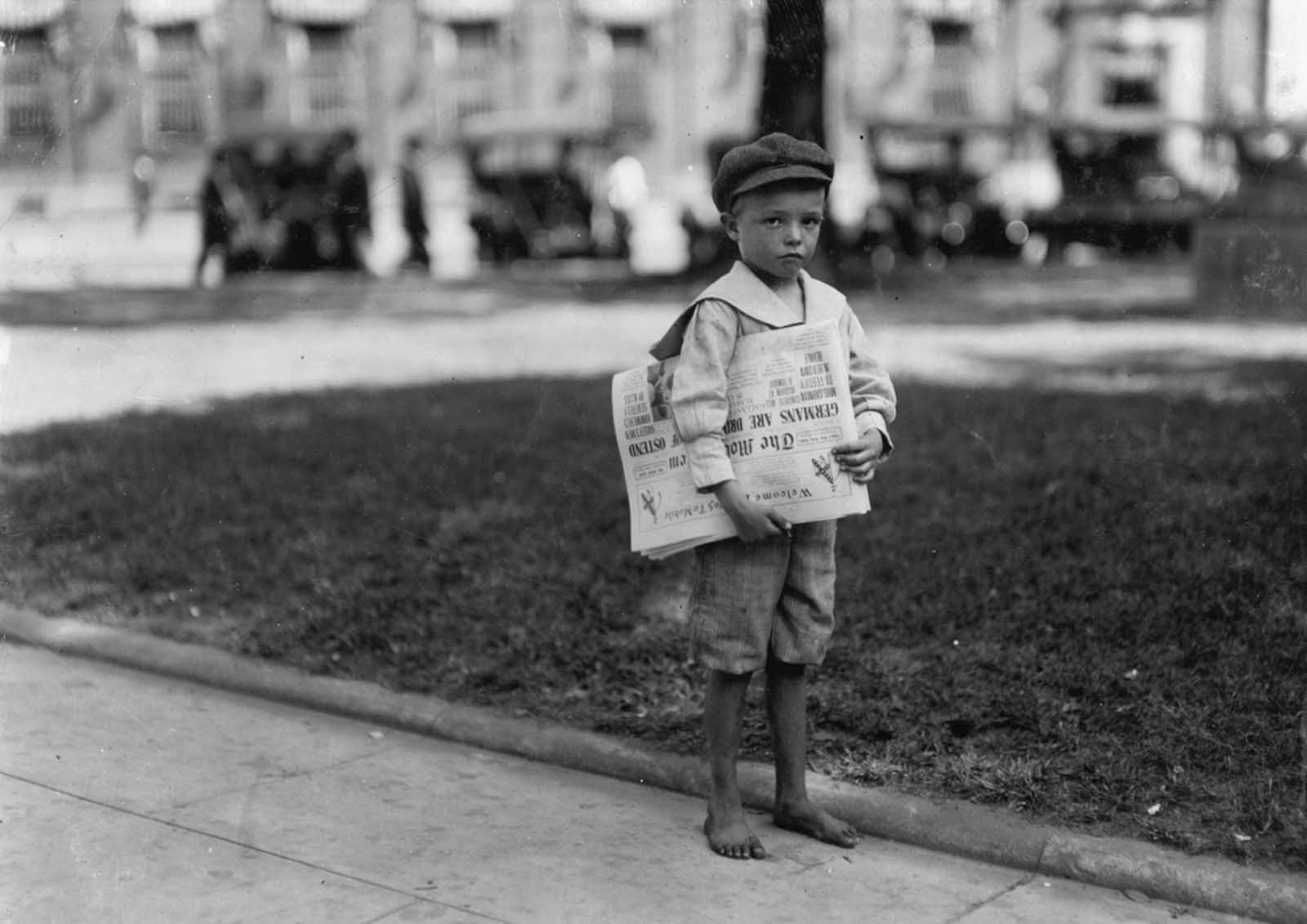 7-year-old Ferris, a small newsboy, or “newsie”, who did not know enough to make change. Photographed in Mobile, Alabama, in October of 1914. The newspapers he holds are copies of The Mobile Item, with the headline “Germans Are Driven Out Of Ostend,” describing the end of the Siege of Antwerp in World War I.

Lewis Hine, a photographer for the National Child Labor Committee, captured photos of some of the children who made up the US labor force between 1908 and 1924.

Hine traveled throughout the US, documenting children working in factories, fields, and at home in support of the NCLC’s mission to promote the “rights, awareness, dignity, well-being and education of children and youth as they relate to work and working”. The photos in this article, compiled by the Library of Congress, are the result of Hine and the NCLC’s work.

The era of industrial growth transformed American society creating a new class of wealthy entrepreneurs and a comfortable middle class. The increase in industry resulted in a growth among the blue-collar working class.

This labor force was made up of millions of newly arrived immigrants and vast numbers of families migrating from rural areas to cities with the hope of job security and prosperity. 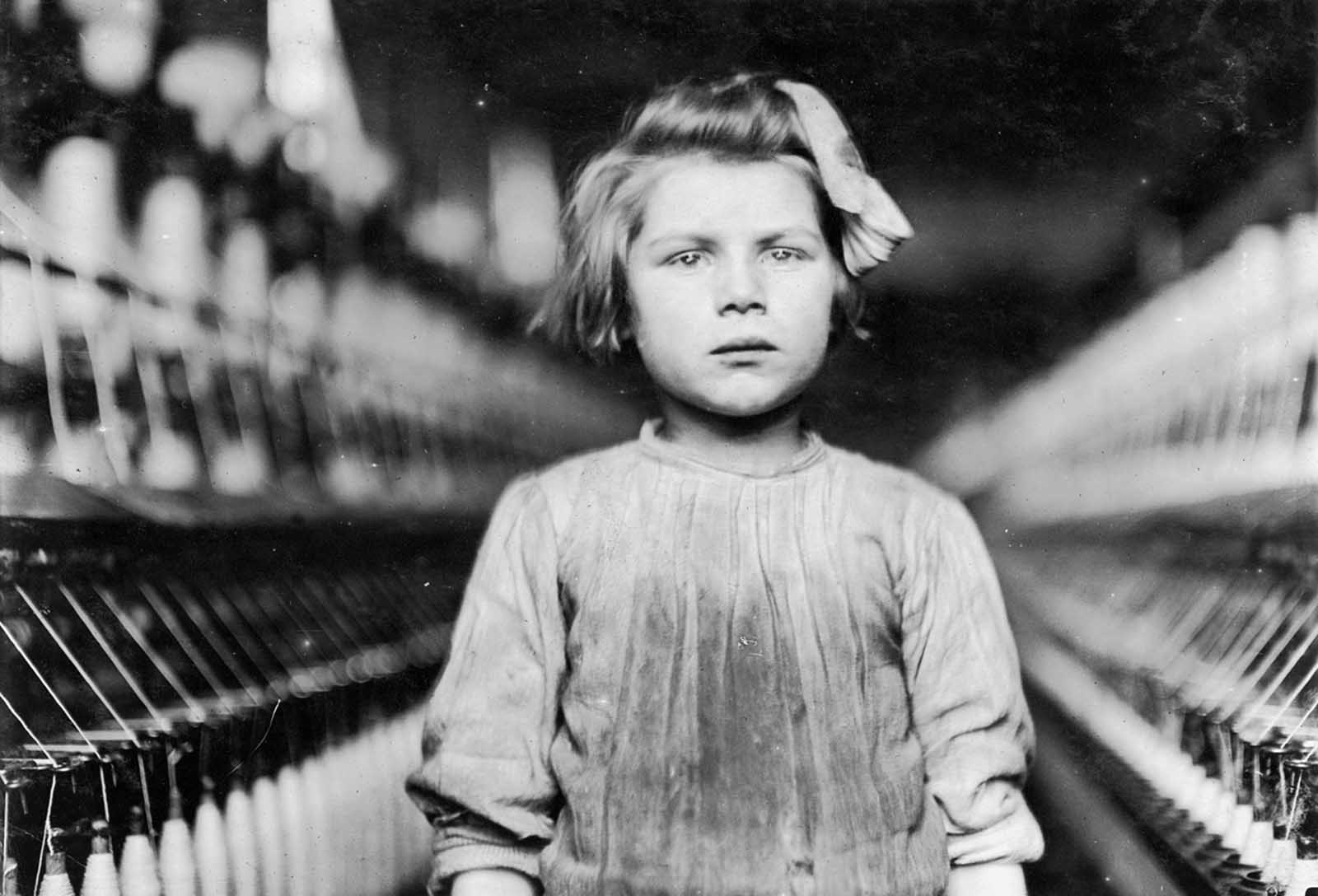 A spinner in the Globe Cotton Mill in Augusta, Georgia, in January of 1909. The overseer admitted she was regularly employed.

With a dream of a better life, rural families relocated to the cities to find work. Sadly, most were disappointed when they arrived and discovered that the truth was not as “rosey” as they had been led to believe.

The jobs available required long hours and offered little pay. In most situations, every able family member was needed to work to simply keep the family above the poverty level. Those working included children as young as three.

Young children working endured some of the harshest conditions. Workdays would often be 10 to 14 hours with minimal breaks during the shift. Factories employing children were often very dangerous places leading to injuries and even deaths. Machinery often ran so quickly that little fingers, arms, and legs could easily get caught.

Beyond the equipment, the environment was a threat to children as well as factories put out fumes and toxins. When inhaled by children these most certainly could result in illness, chronic conditions, or disease. 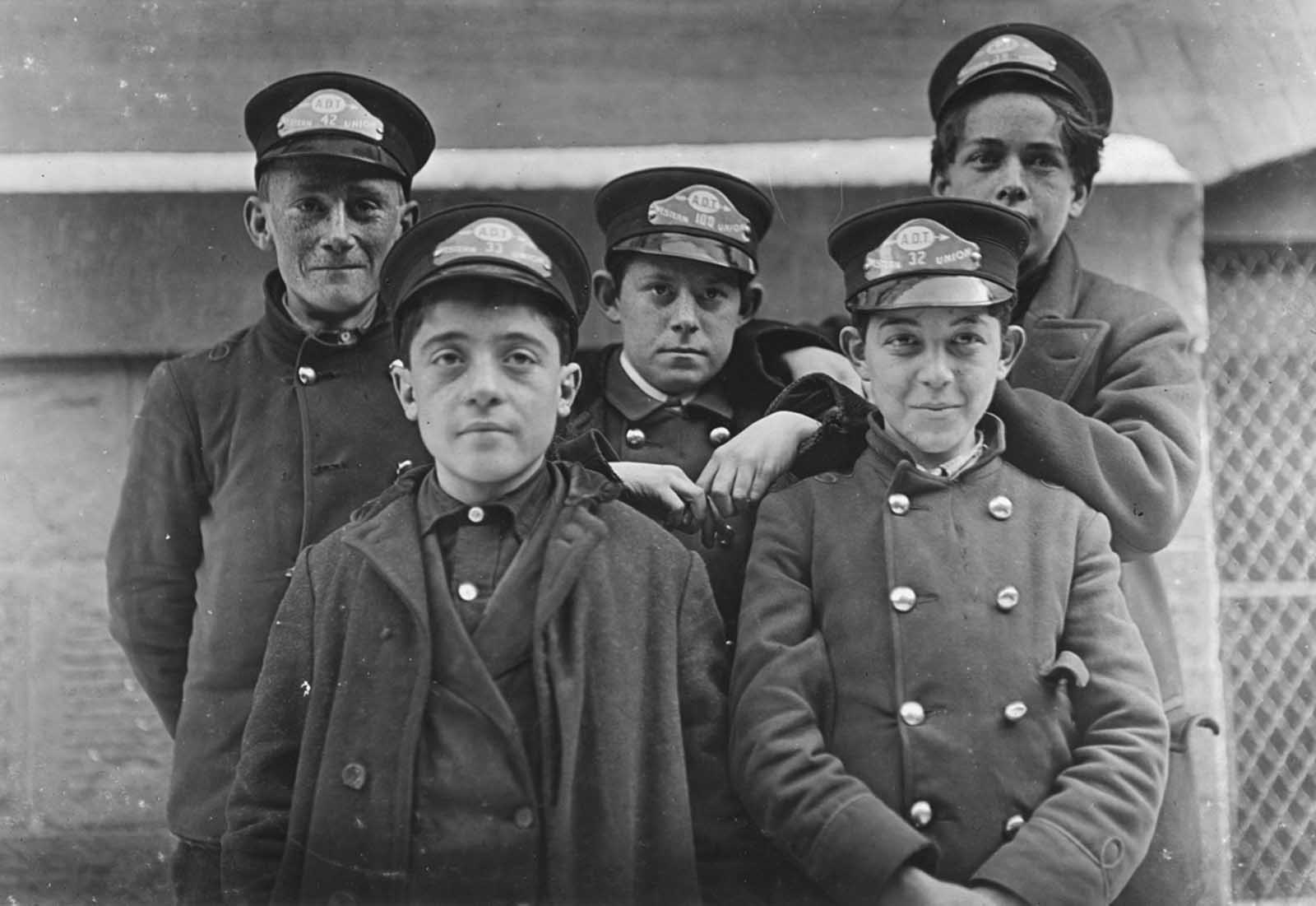 A few of the Western Union messengers in Hartford, Connecticut. They are on duty, alternate nights, until 10 P.M.

Children working in rural areas were not faring much better. Harvesting crops in extreme temperatures for long hours was considered normal for these children. Work in agriculture was typically less regulated than factory duties.

Farm work was often not considered dangerous or extraneous for children, even though they carried their weight and more in loads of produce and handled dangerous tools.

In the United States, it took many years to outlaw child labor. By 1899, 28 states had passed laws regulating child labor. Many efforts were made to pass a national child labor law. The U.S. Congress passed two laws, in 1918 and 1922, but the Supreme Court declared both unconstitutional.

In 1924, Congress proposed a constitutional amendment prohibiting child labor, but the states did not ratify it. Then, in 1938, Congress passed the Fair Labor Standards Act.

It fixed minimum ages of 16 for work during school hours, 14 for certain jobs after school, and 18 for dangerous work. Today all the states and the U.S. government have laws regulating child labor. These laws have cured the worst evils of children working in factories. 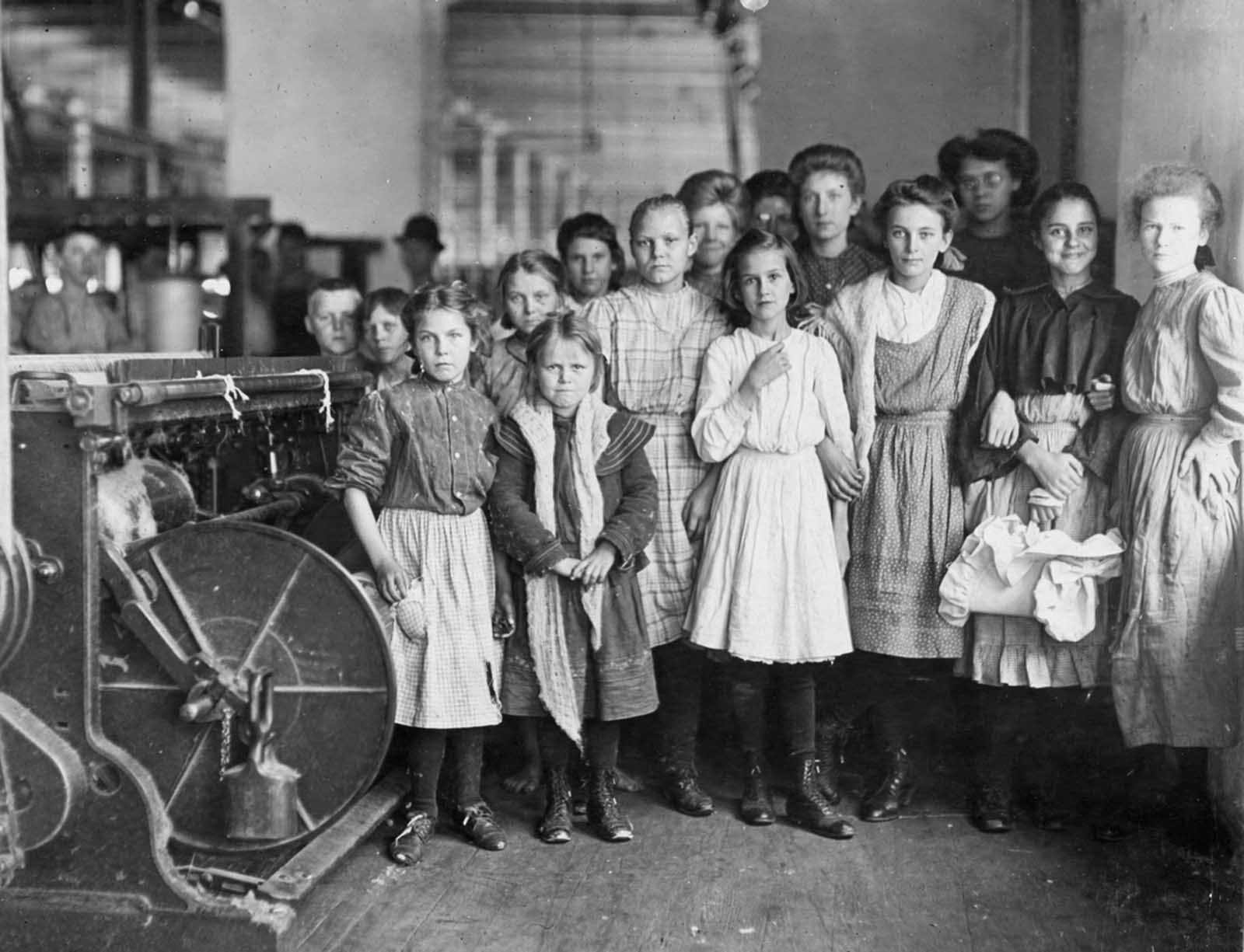 Textile mill workers in Newberry, South Carolina, in December of 1908. 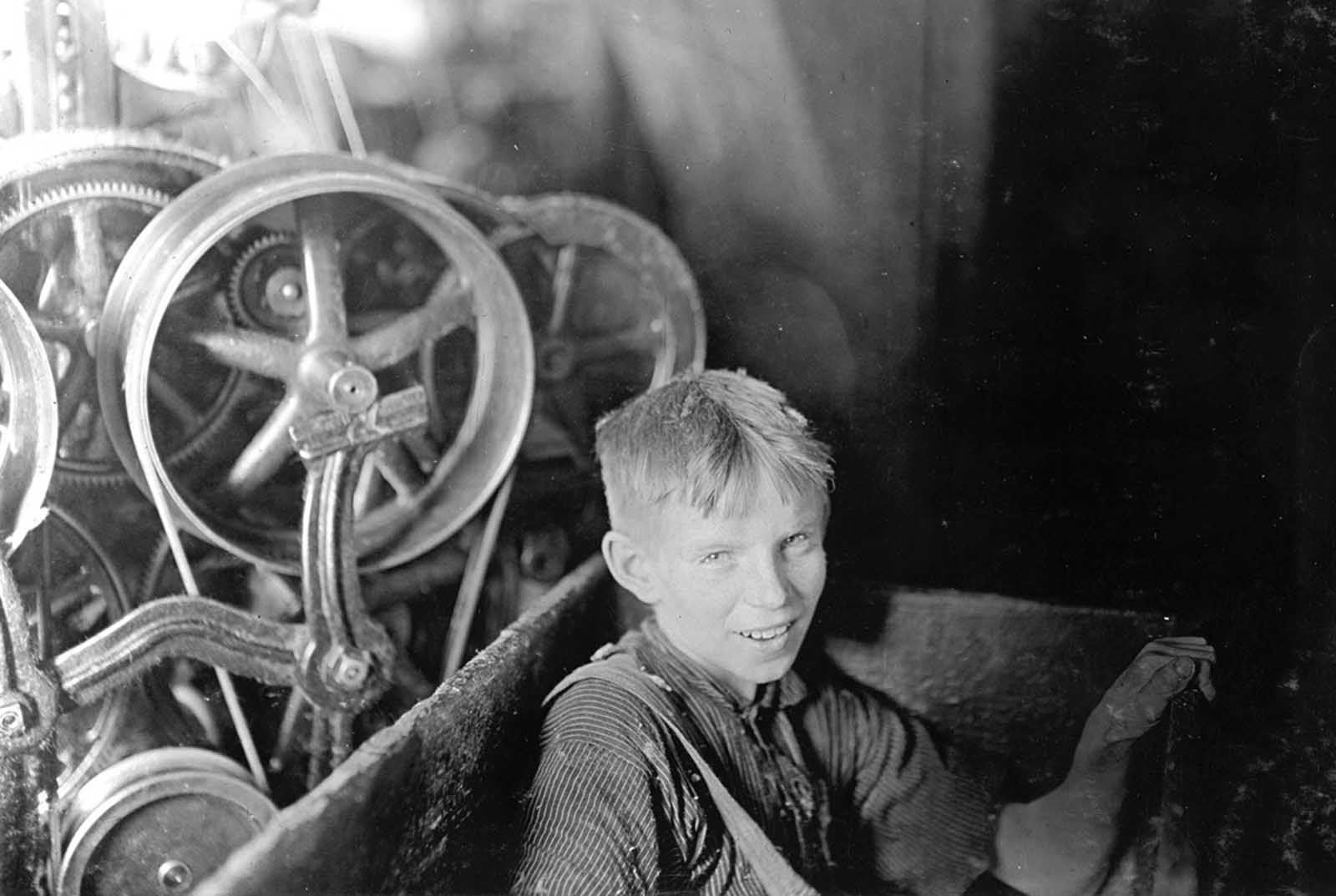 Willie, one of the young spinners in the Quidwick Co. Mill in Anthony, Rhode Island. He was taking his noon rest in a doffer-box on this day in April of 1909. 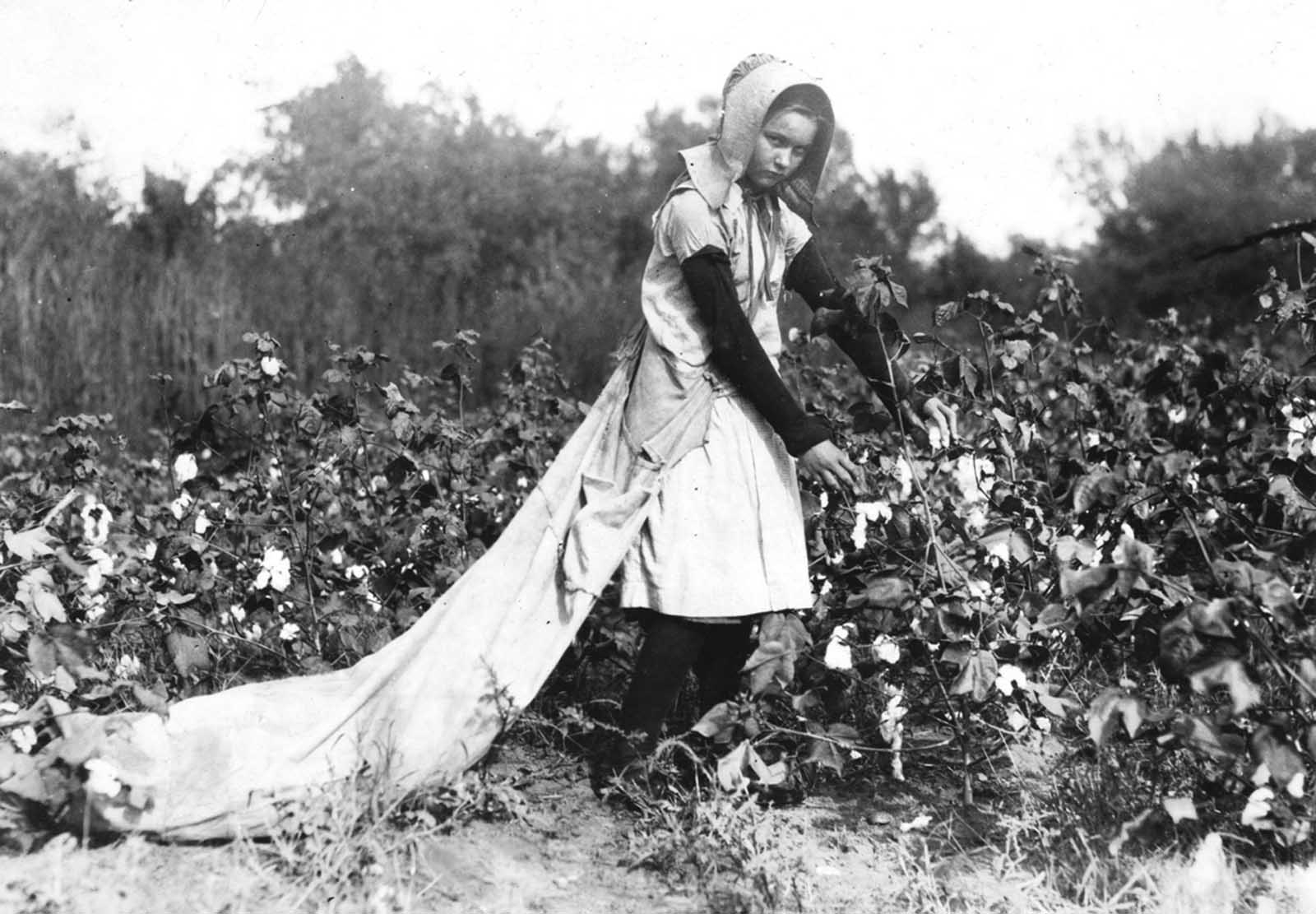 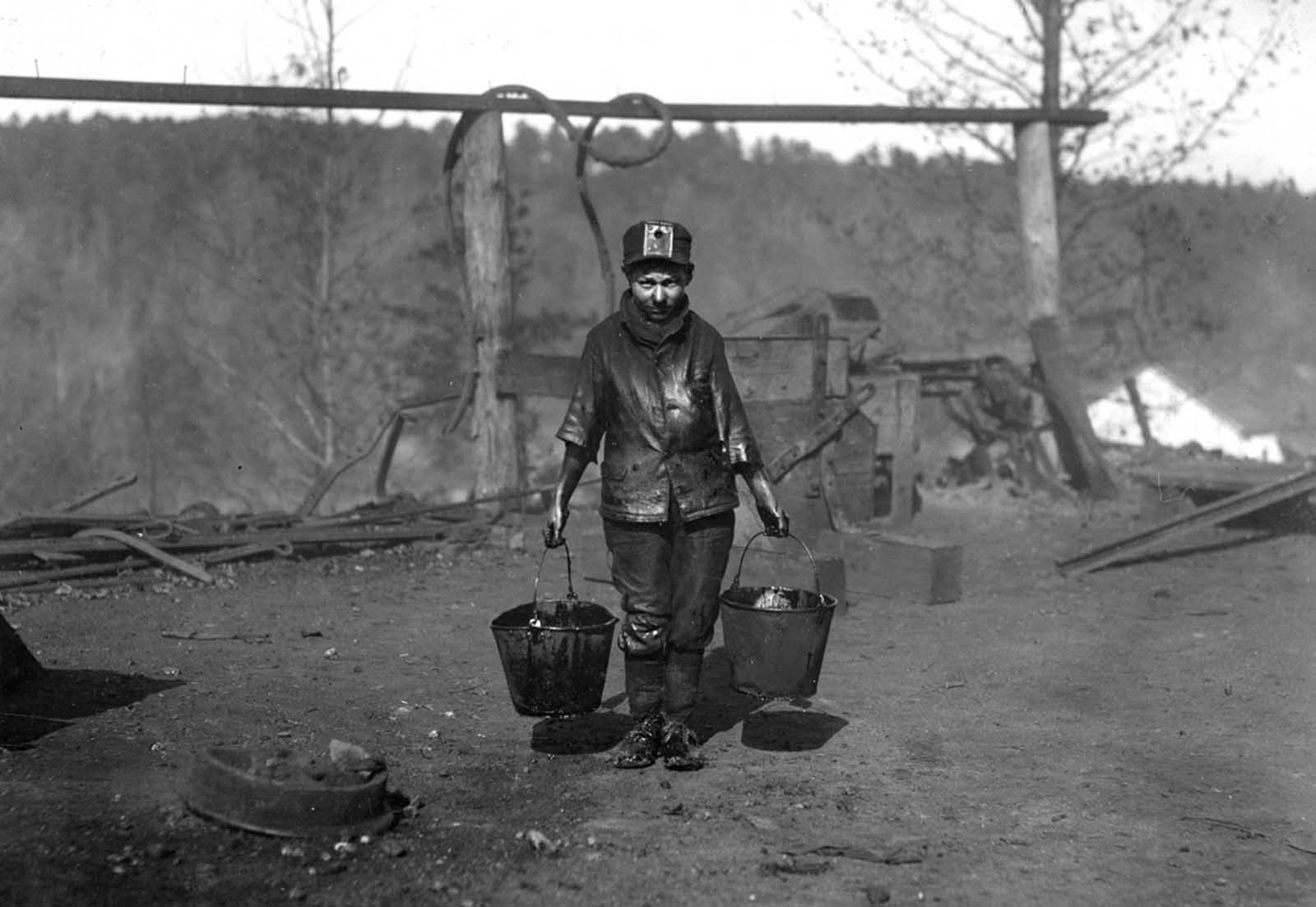 Shorpy Higginbotham, a “greaser” on the tipple at Bessie Mine, of the Sloss-Sheffield Steel and Iron Co in Alabama. He said he was 14 years old, but it is doubtful. He carries two heavy pails of grease, and is often in danger of being run over by the coal cars. Photographed in December of 1910. 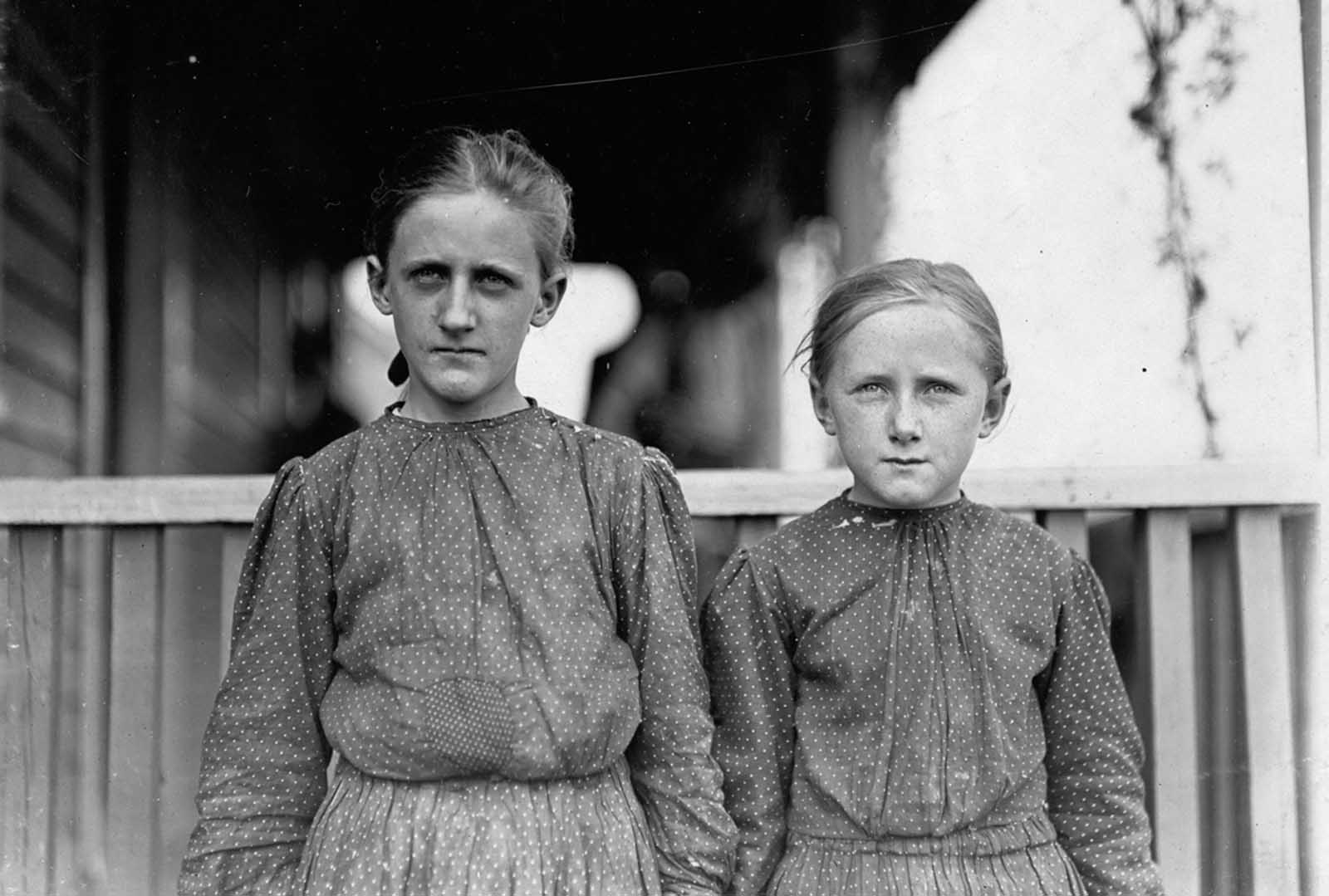 Minnie Carpenter, (left) photographed in November of 1908 at Loray Mill in Gastonia, North Carolina. Minnie makes fifty cents for a 10-hour day as a spinner in the mill. The younger girl works irregularly. 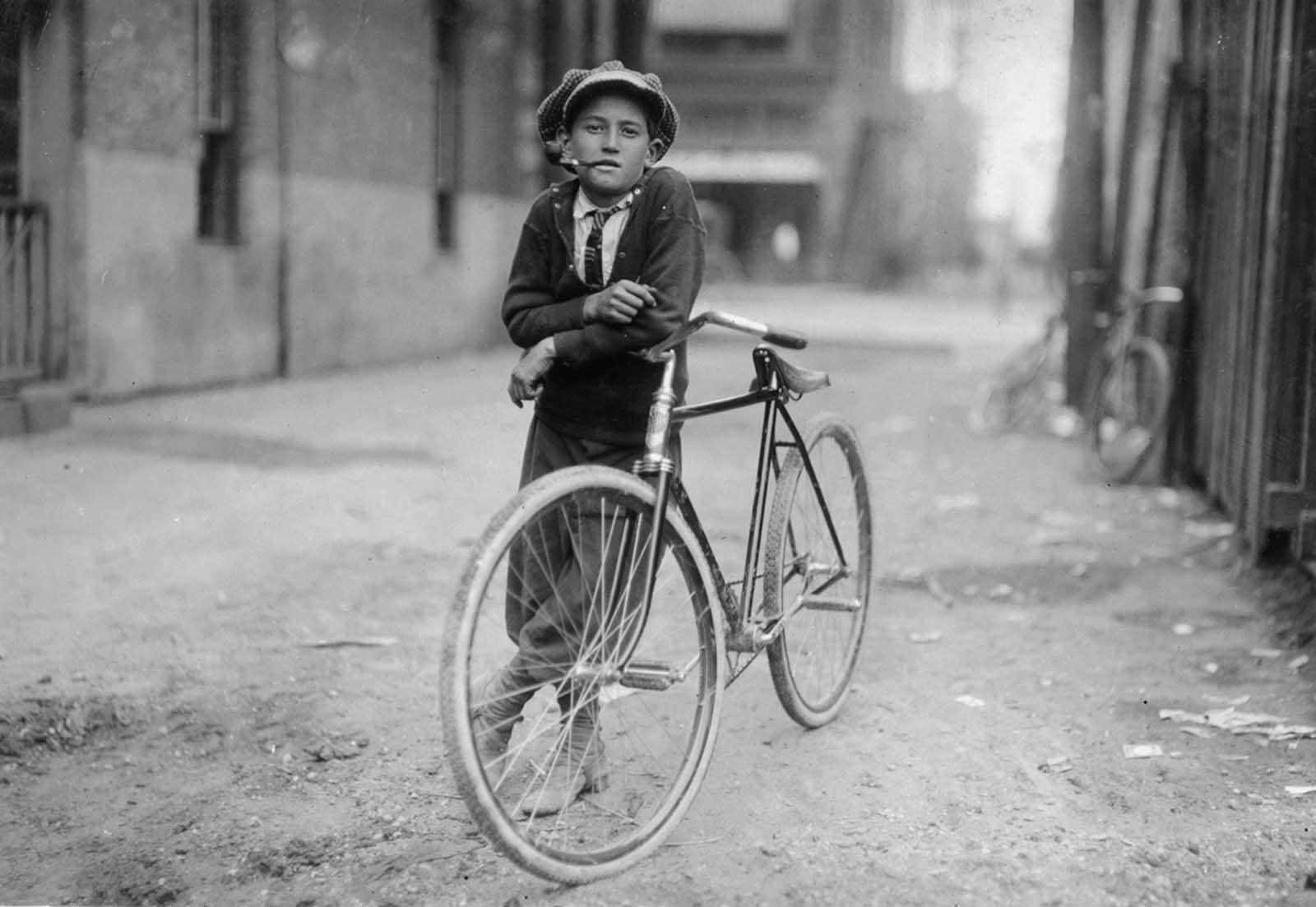 A pipe-smoking messenger boy working for Mackay Telegraph Company. He said he was fifteen years old. Photographed in Waco, Texas in September of 1913. 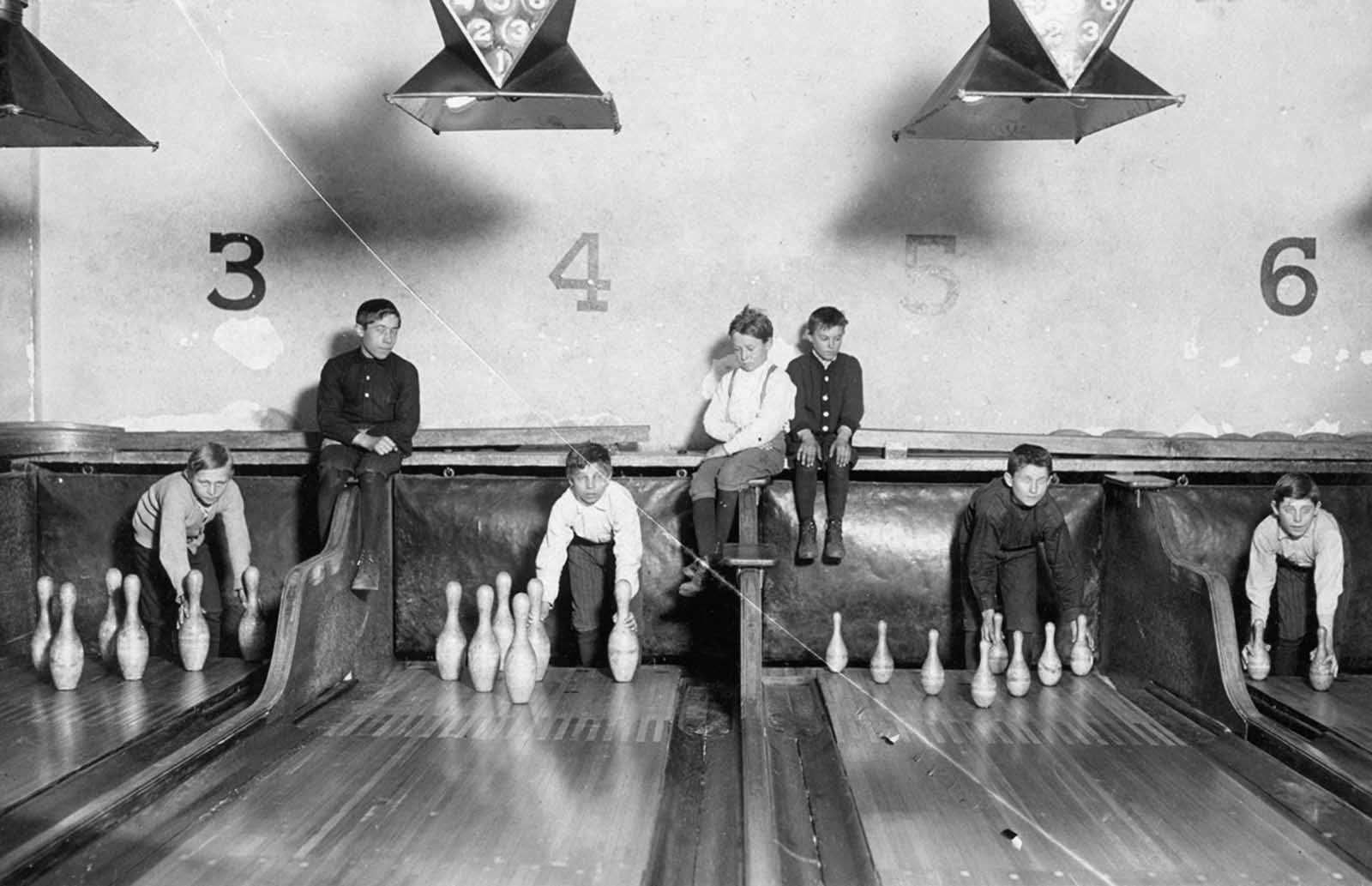 Pin-boys work in the Arcade Bowling Alley in Trenton, New Jersey, on December 20, 1909. The boys worked until midnight and later. 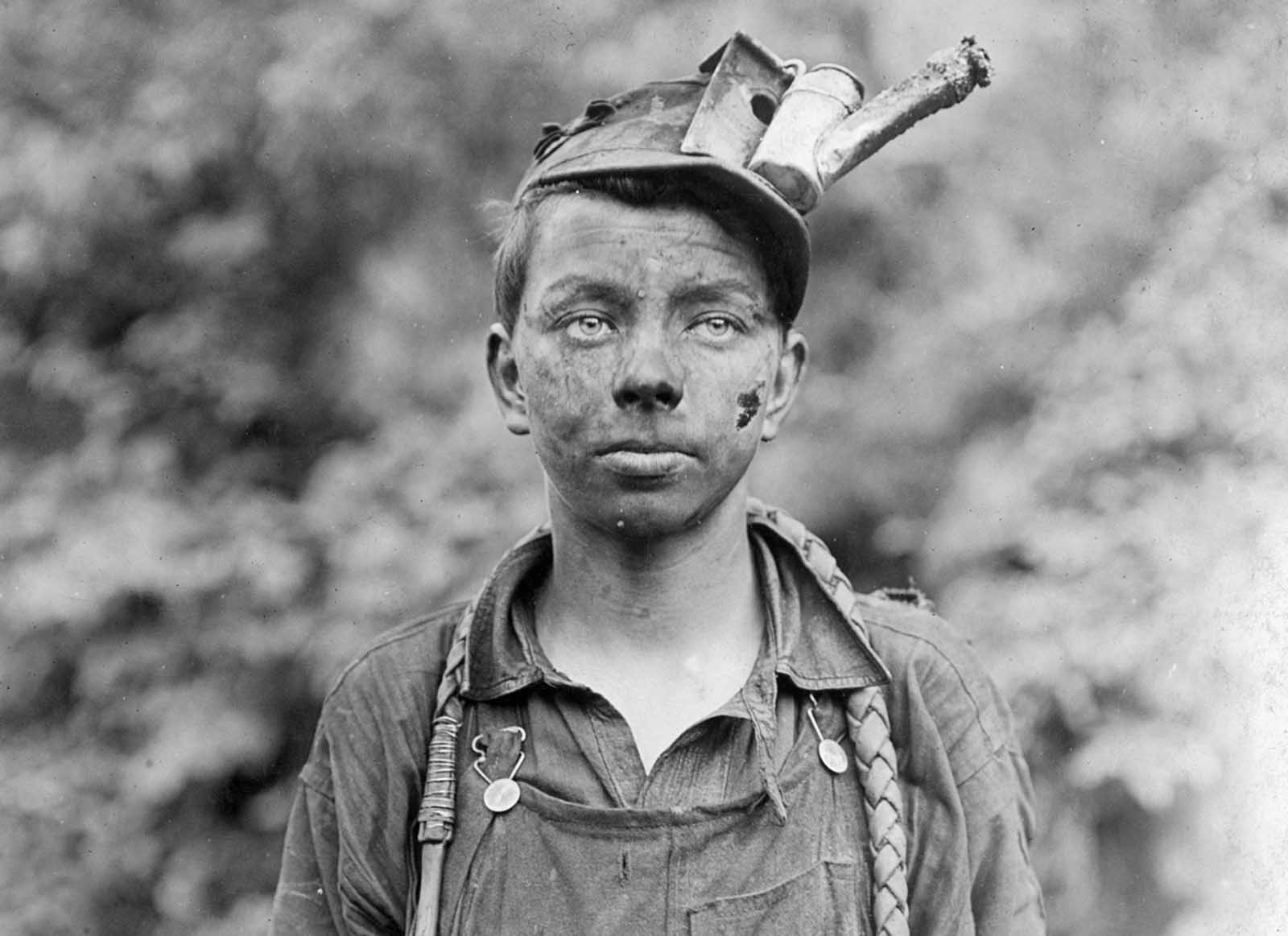 A young driver in the Brown Mine in Brown, West Virginia, in September of 1908. He had been driving pack animals for one year, working from 7 a.m. to 5:30 p.m. daily. The device attached to his cap is an oil-wick cap lamp, which would be lit when the boy was working in the mine tunnels. 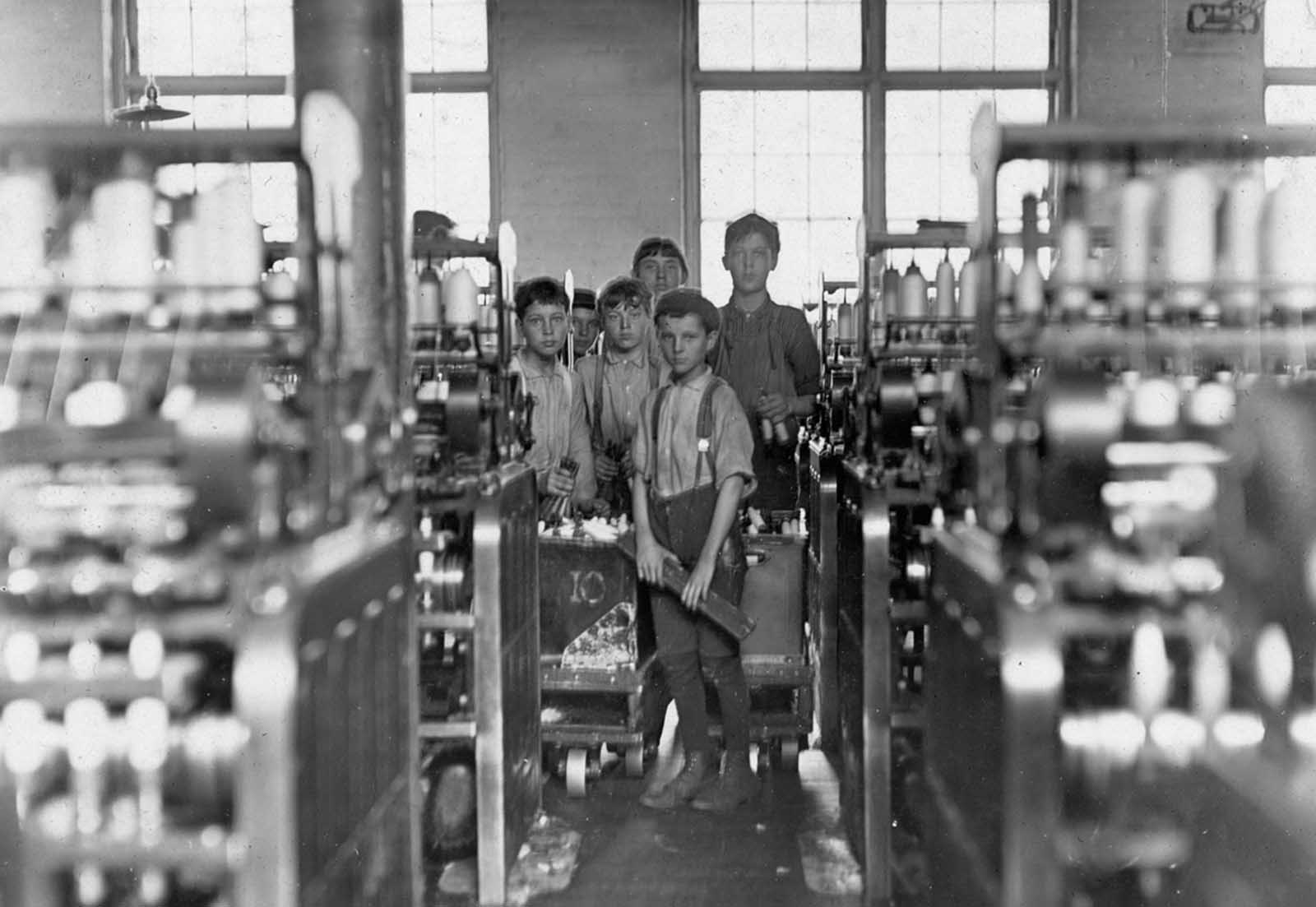 Young doffers in Mollahan Mills in Newberry, South Carolina, on December 3, 1908. A doffer is someone who removes, or “doffs”, bobbins or spindles that hold spun cotton or wool from a spinning frame, then replaces them with empty ones. 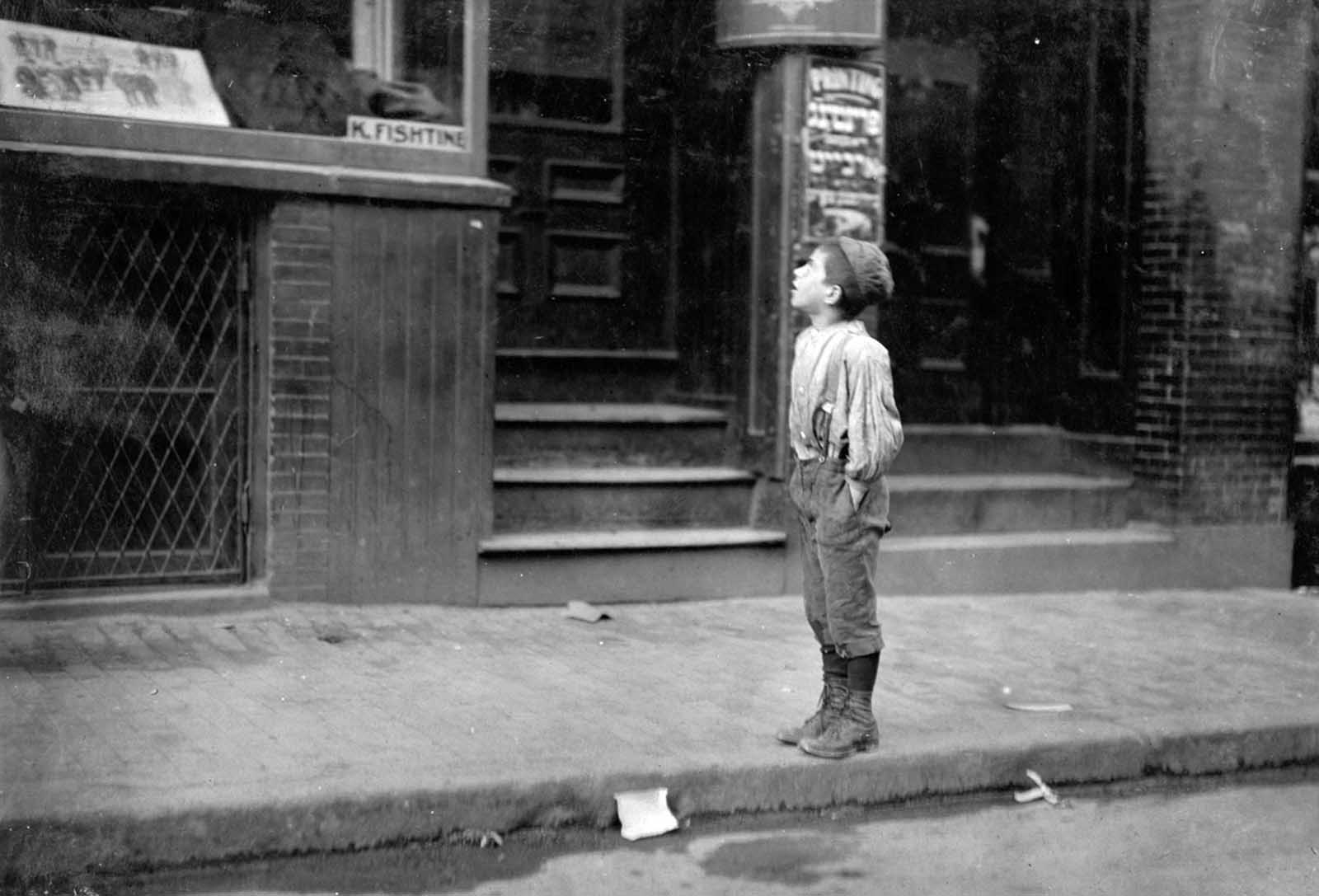 “Fire! Fire! I want to make the fire!” An Italian boy on Salem Street on Saturday morning, offering to make fires for Jewish People on their Sabbath, in Boston, Massachusetts, in October of 1909. 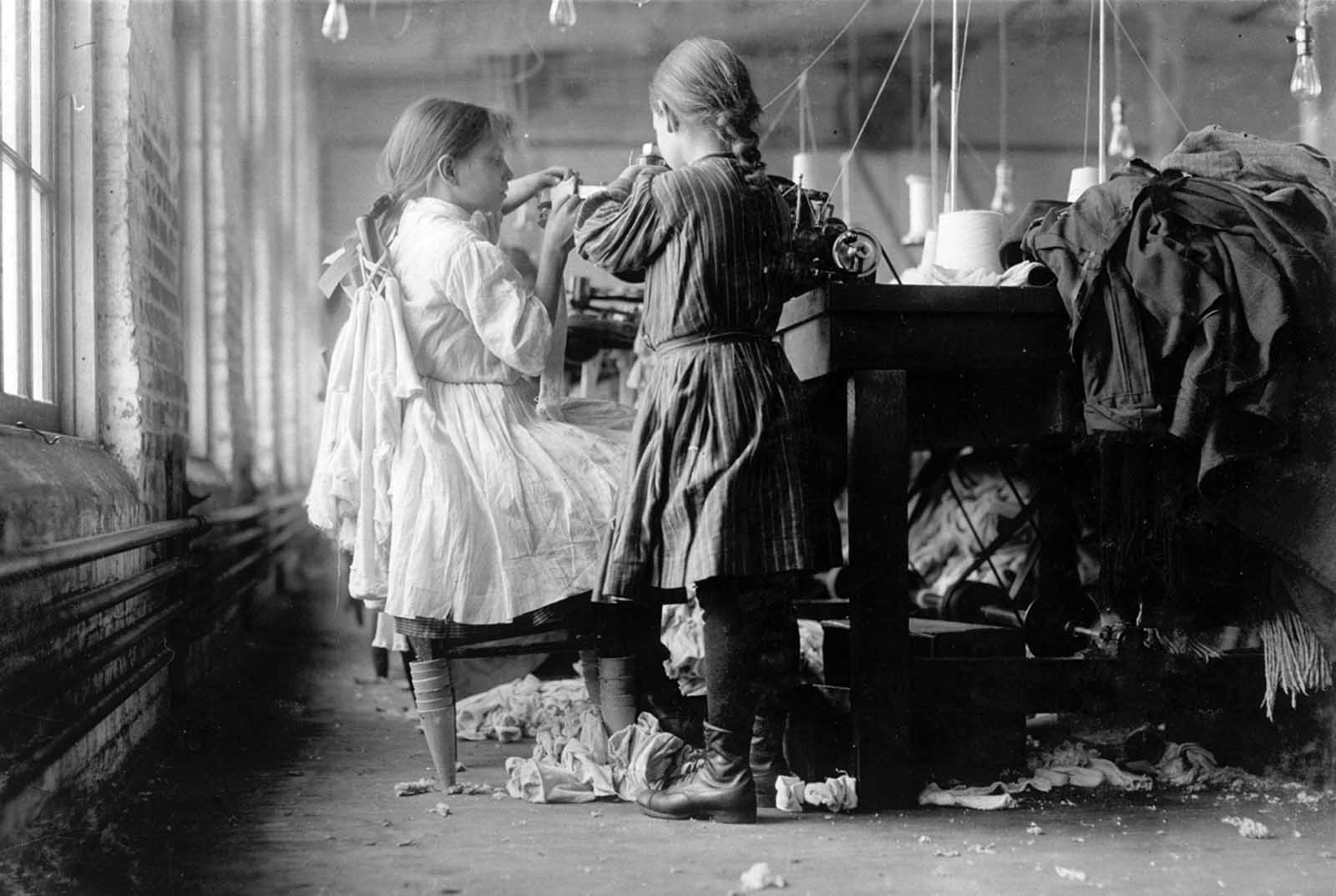 Two young workers, a raveler and a looper, in Loudon Hosiery Mills in Loudon, Tennessee, in December of 1910. 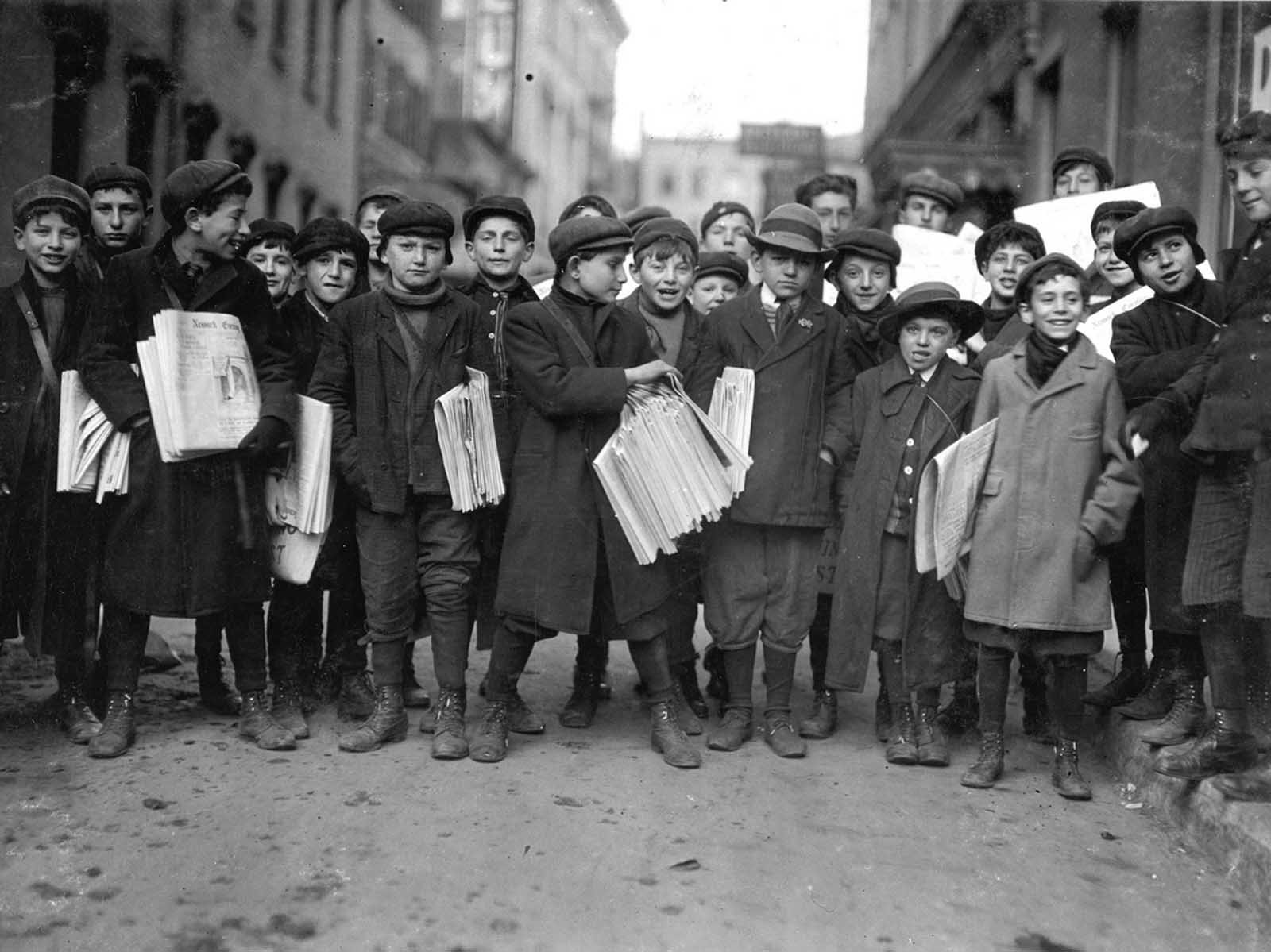 Some of Newark, New Jersey’s newsies, in December of 1909. 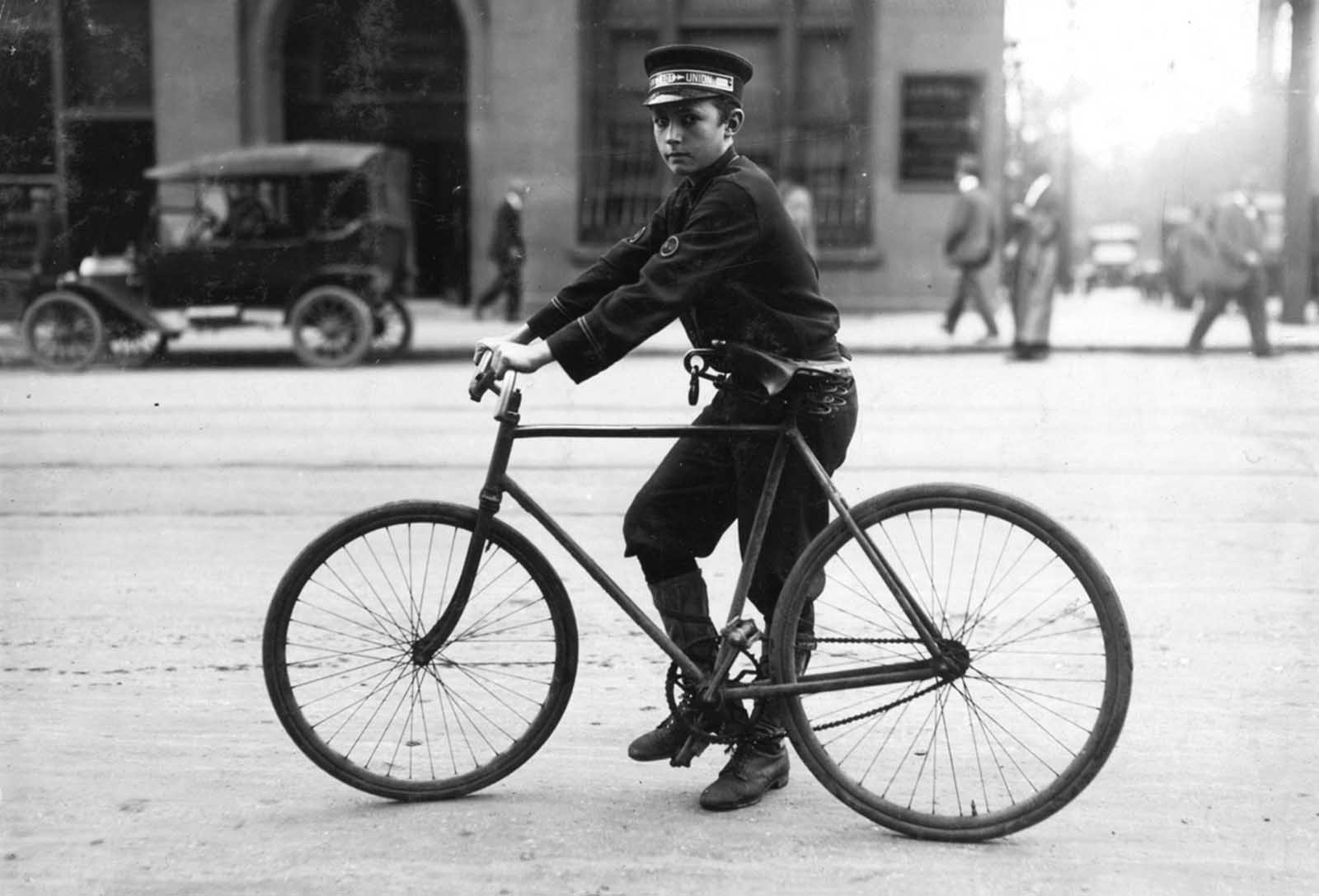 A typical Birmingham, Alabama, bicycle messenger, in October of 1914. 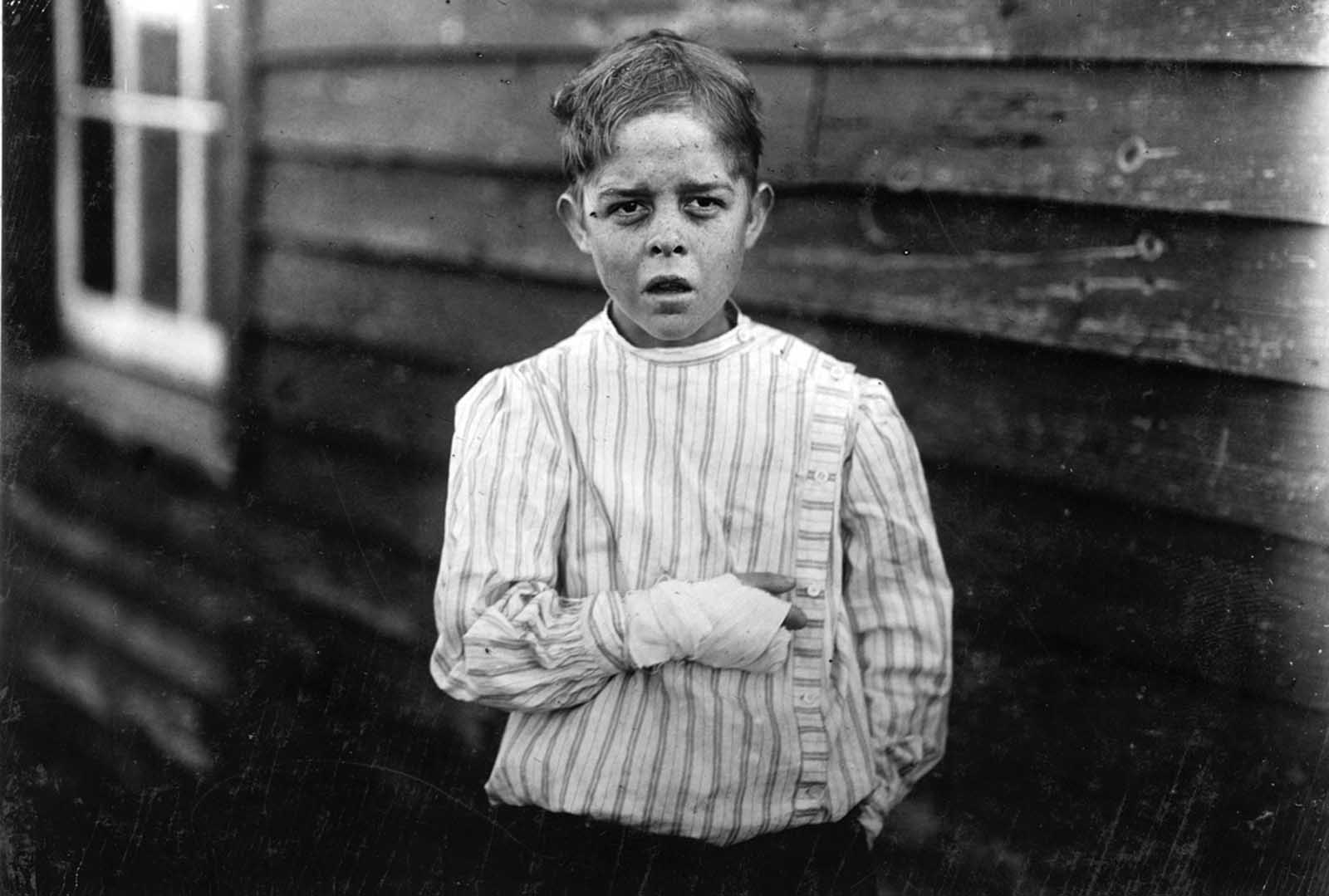 An injured young mill worker. Giles Edmund Newsom, photographed on October 23, 1912. Giles was injured while working in Sanders Spinning Mill in Bessemer City, North Carolina, on August 21st, 1912. A piece of machinery fell on his foot, mashing his toe. This caused him to fall onto a spinning machine and his hand went into unprotected gearing, crushing and tearing out two fingers. He told the investigating attorney that he was 11 years old when it happened. He and his younger brother worked in the mill several months before the accident. Their father, R.L. Newsom, tried to compromise with the company when he found the boy would receive the money and not the parents. Their mother tried to blame the boys for getting jobs on their own, but she let them work several months. Their aunt said “Now he’s jes got to where he could be of some help to his ma, an’ then this happens and he can’t never work no more like he oughter.” 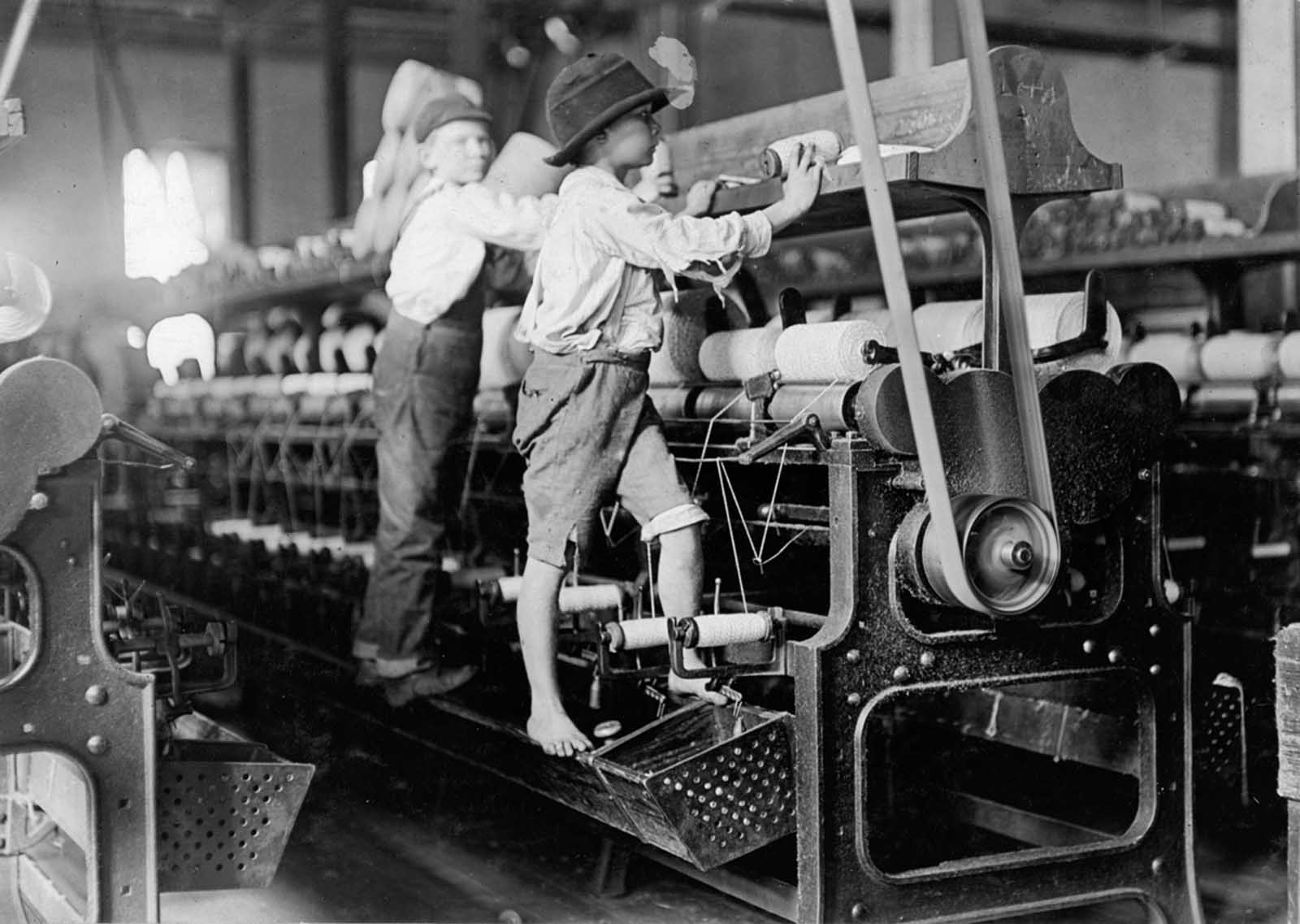 Bibb Mill No. 1 in Macon, Georgia, on January 19, 1909. Some young workers were so small they had to climb up on the spinning frame to mend the broken threads and put back the empty bobbins. 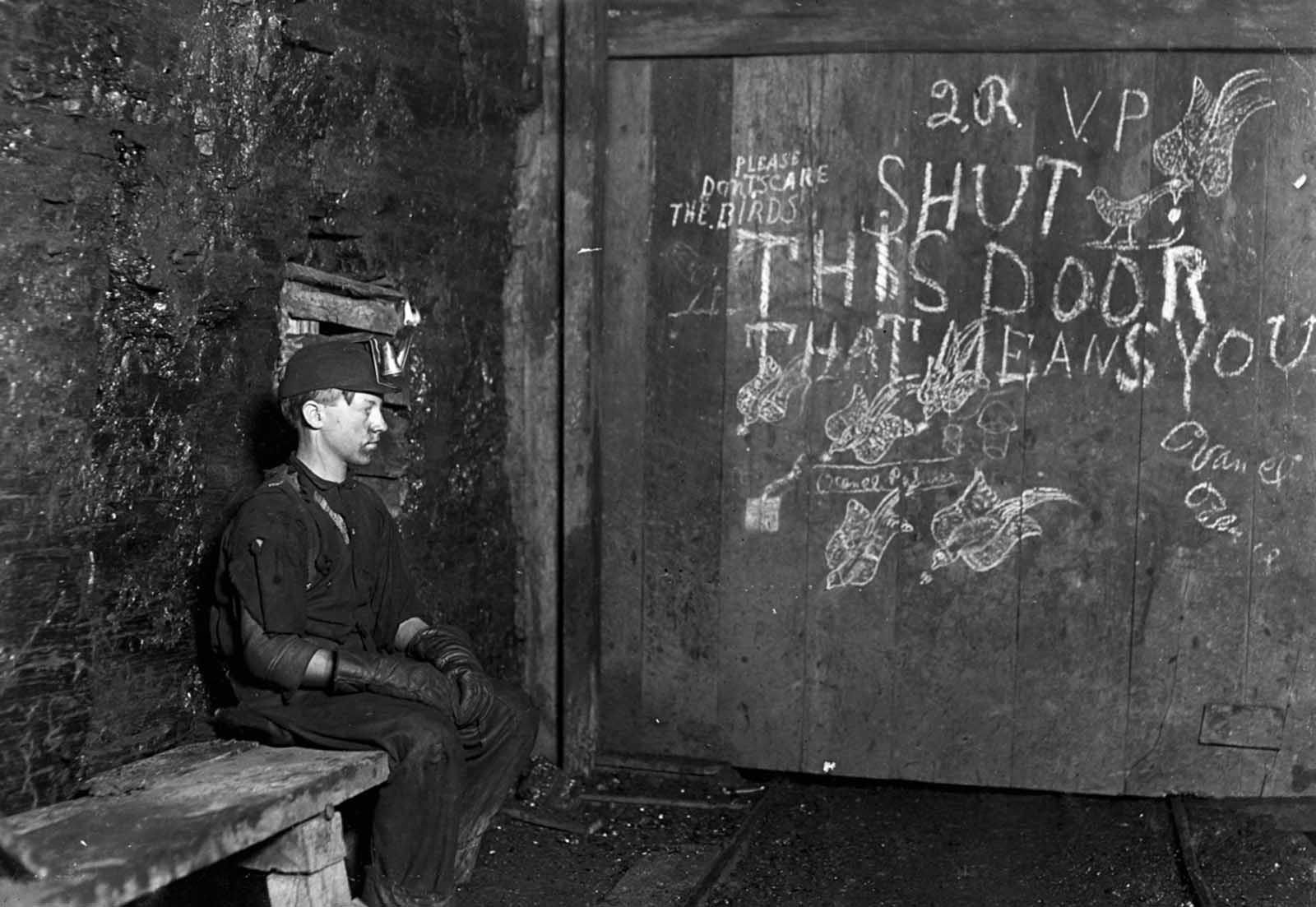 15-year-old Vance, a trapper boy, sits by a large door in West Virginia coal mine in September of 1908. Vance has trapped for several years, receiving 75 cents a day for 10 hours work. All he does is to open and shut this door. Most of the time he sits here idle, waiting for the cars to come. Due to the intense darkness in the mine, the hieroglyphics on the door were not visible until his photo plate was developed. 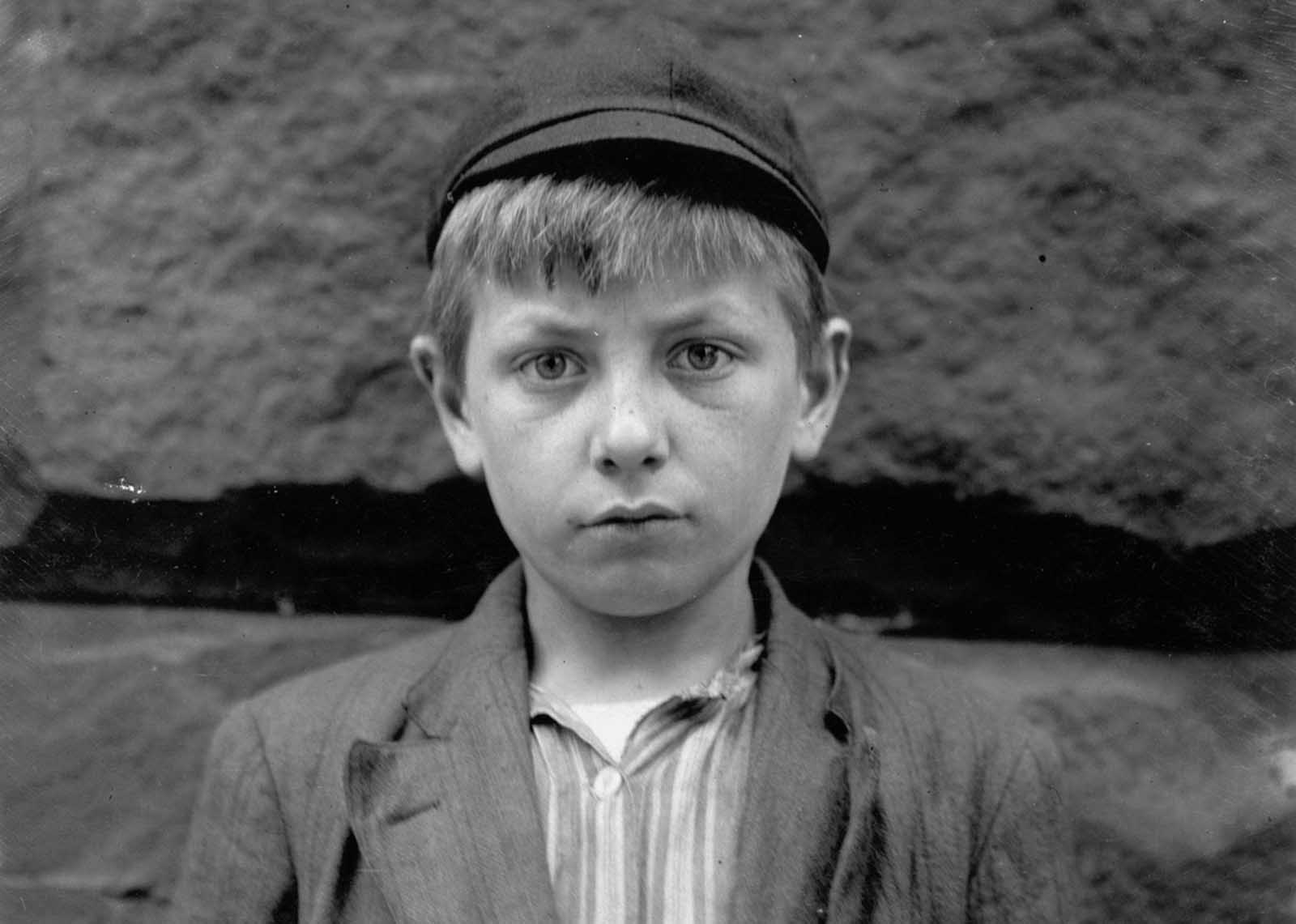 Louis Birch, age 12, a newsboy, stands at the corner of 4th and Pine St in Wilmington, Delaware, in May of 1910. Louis had just started selling, earning 10 cents in a day. His father had passed away. Louis, of his own accord, took up newspaper selling in order to help support his widowed mother. Louis stays out until 12:30 every night and accompanies his brother, Stanley, who is a messenger, on all calls because Stanley is afraid to be out on the street alone at night. 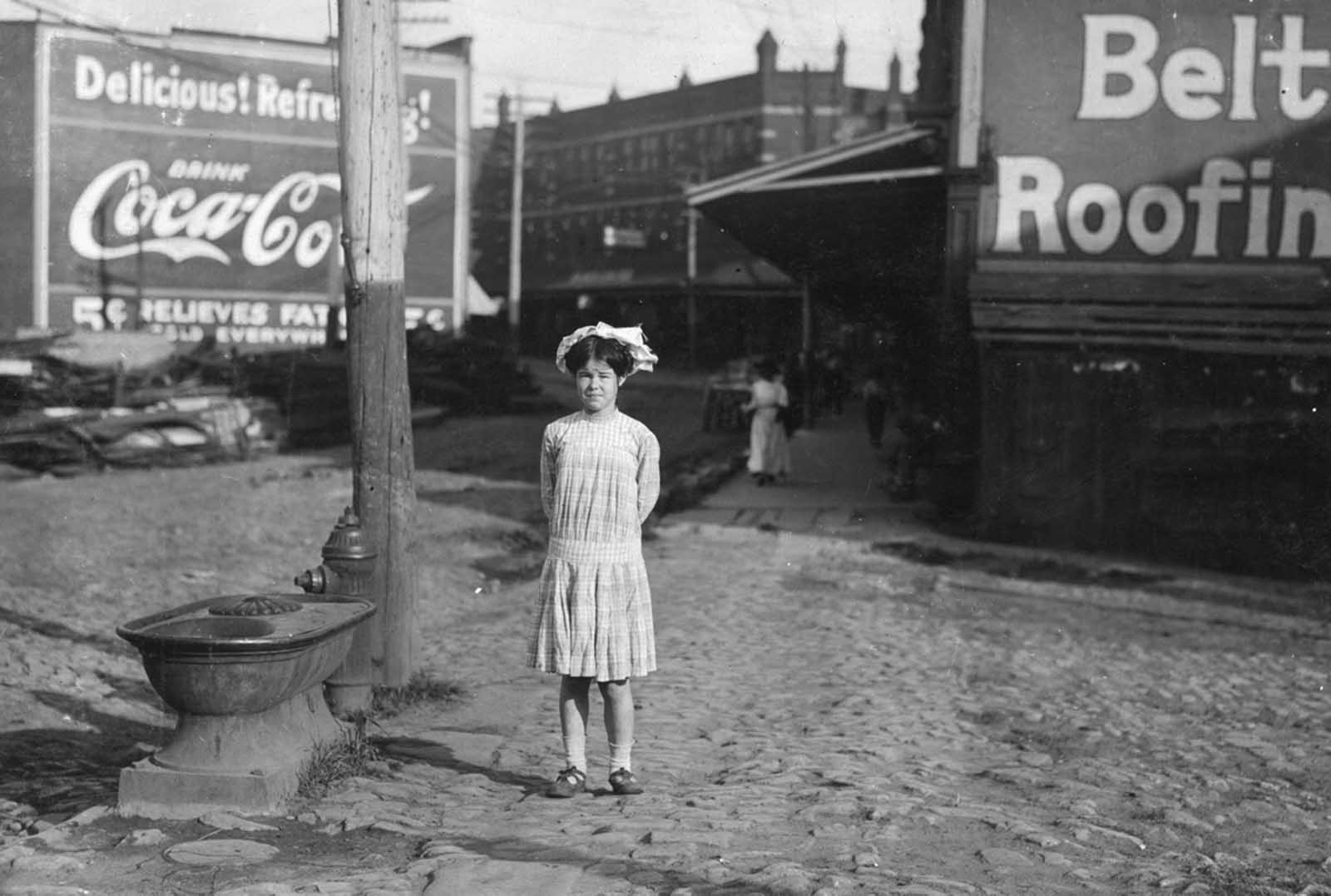 Ethel Shumate has been rolling cigarettes in a Danville Virginia factory for six months. She said she was thirteen years old, but it is doubtful. Photographed in June of 1911. 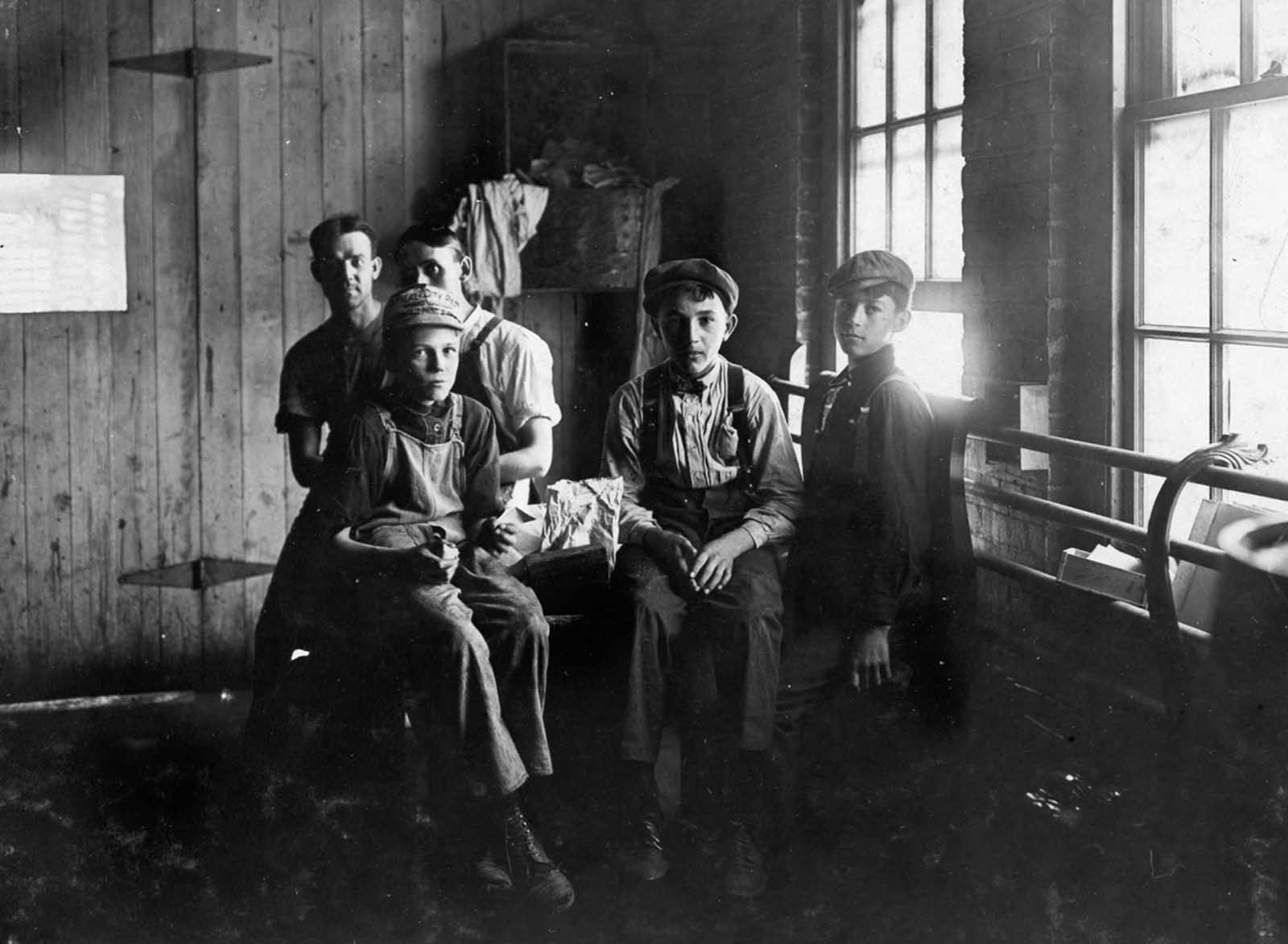 Noon Hour in an Indianapolis furniture factory, on a day in August of 1908. 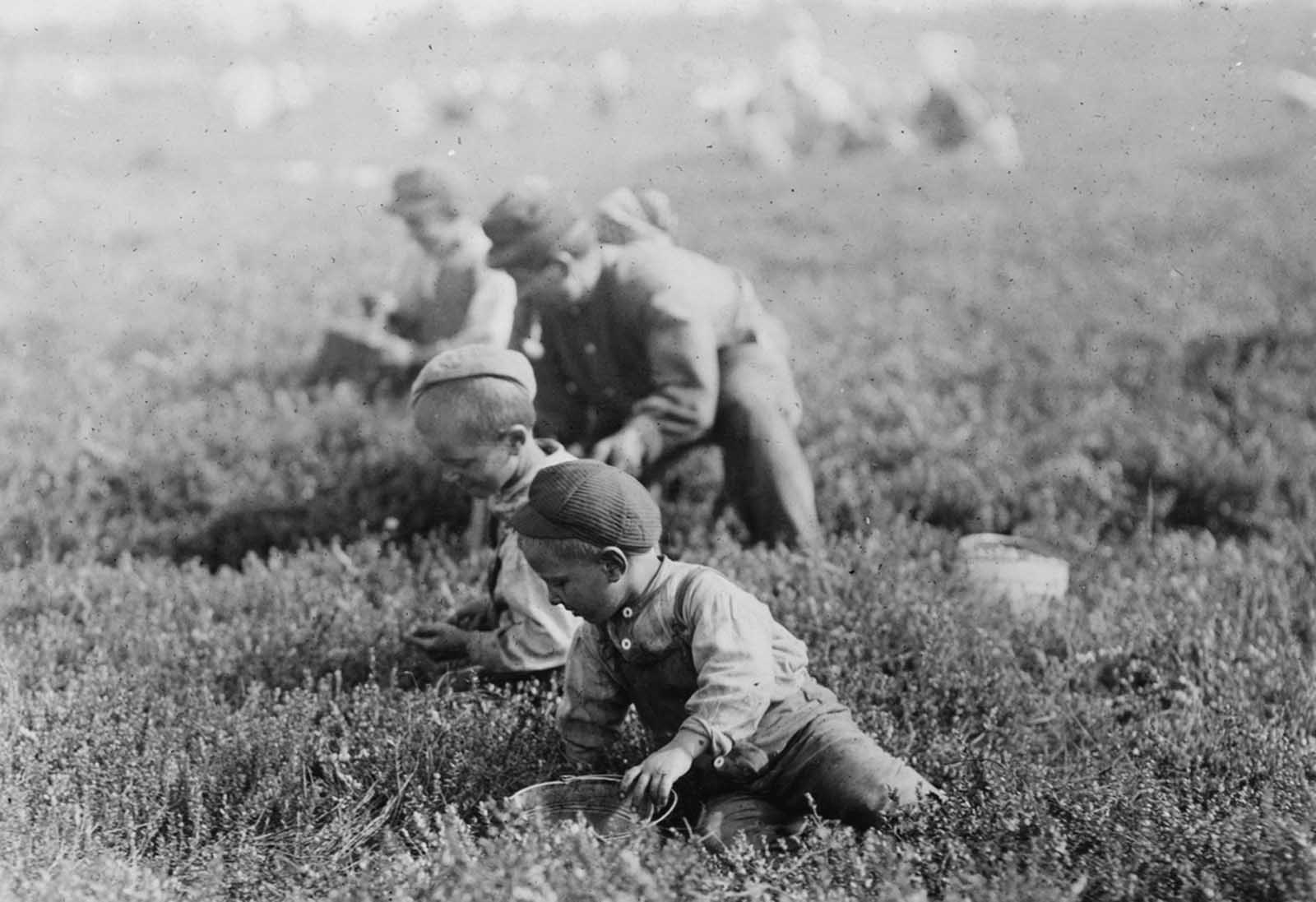 The photographer found the Arnao family, children and all, working on Hichens farm in Cannon, Delaware, on May 28, 1910. Their children are 3, 6, and 9 years old. 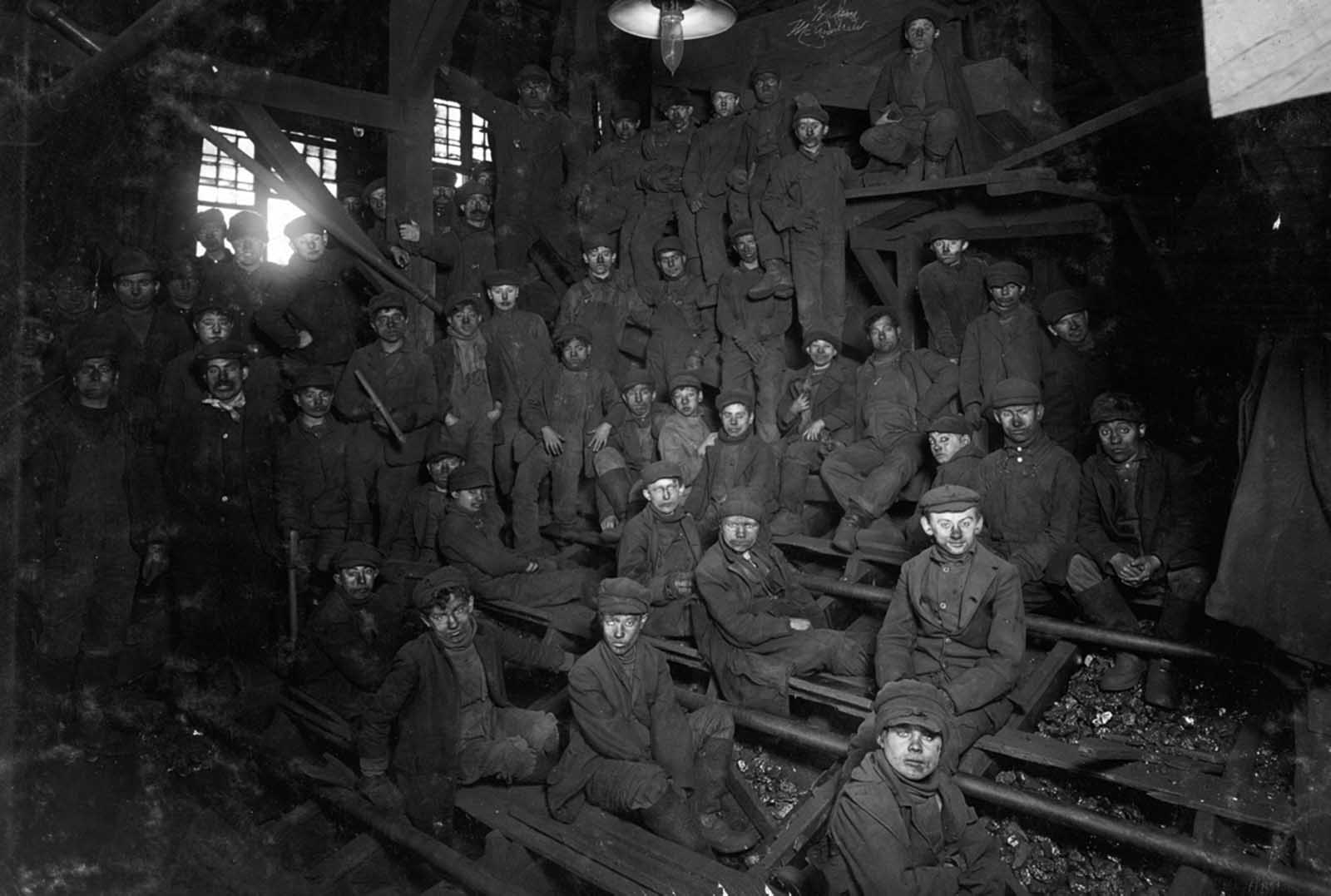 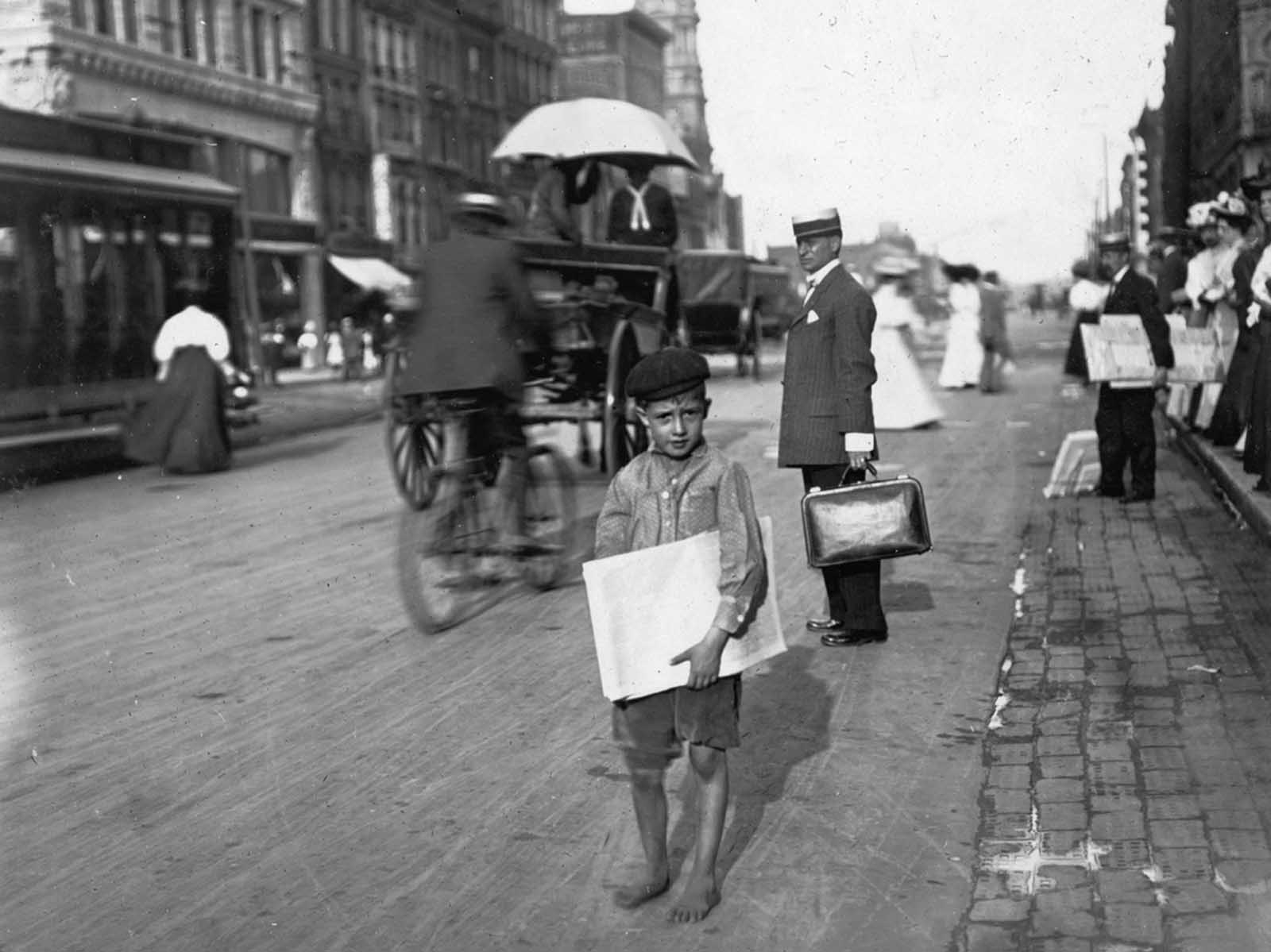 A barefoot Indianapolis newsie in August of 1908. 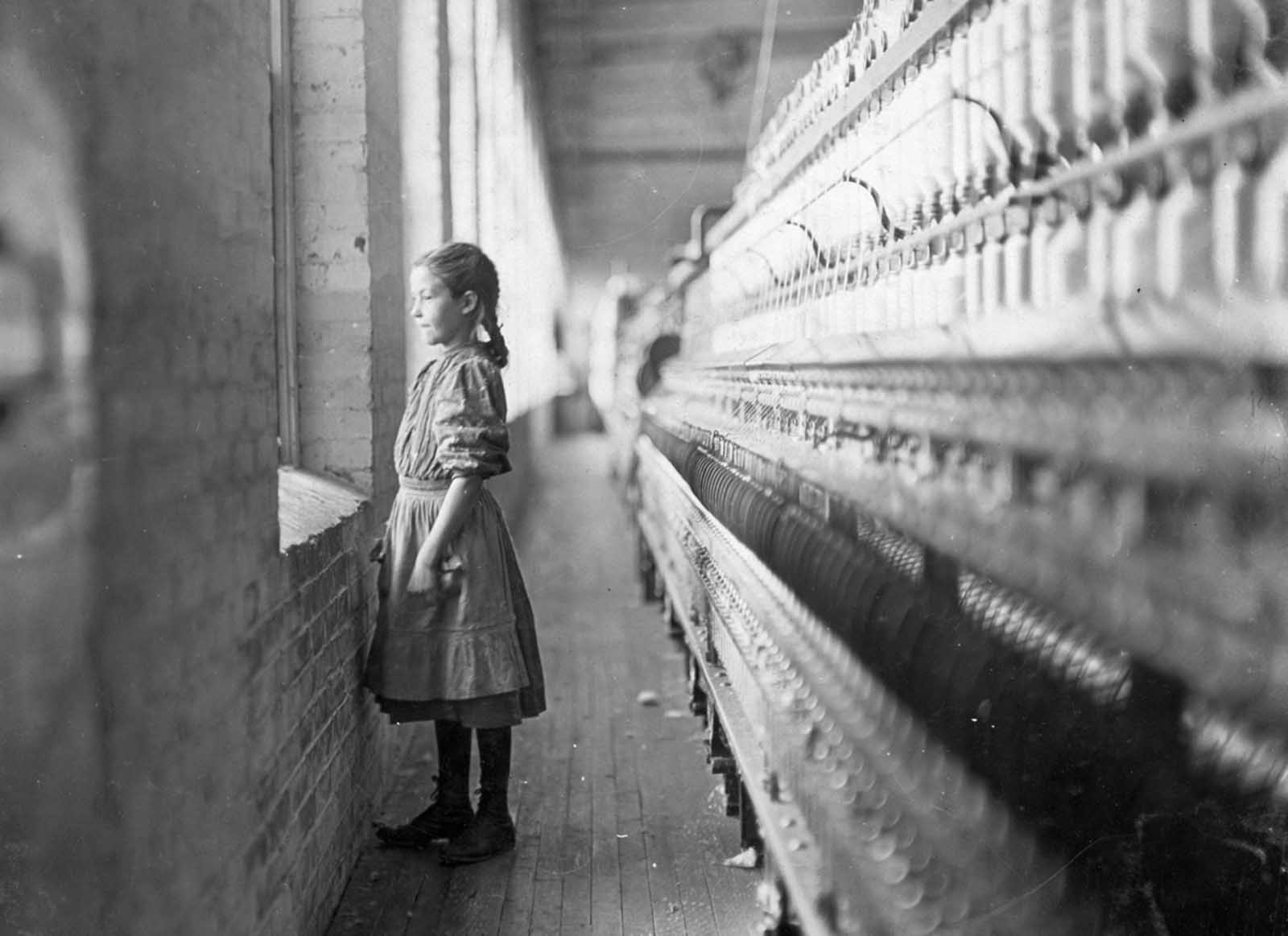 A 10-year-old spinner at the Rhodes Mfg. Co. takes a momentary glimpse of the outside world. She said she had been working there for more than a year. Photographed in Lincolnton, North Carolina, in November of 1908. 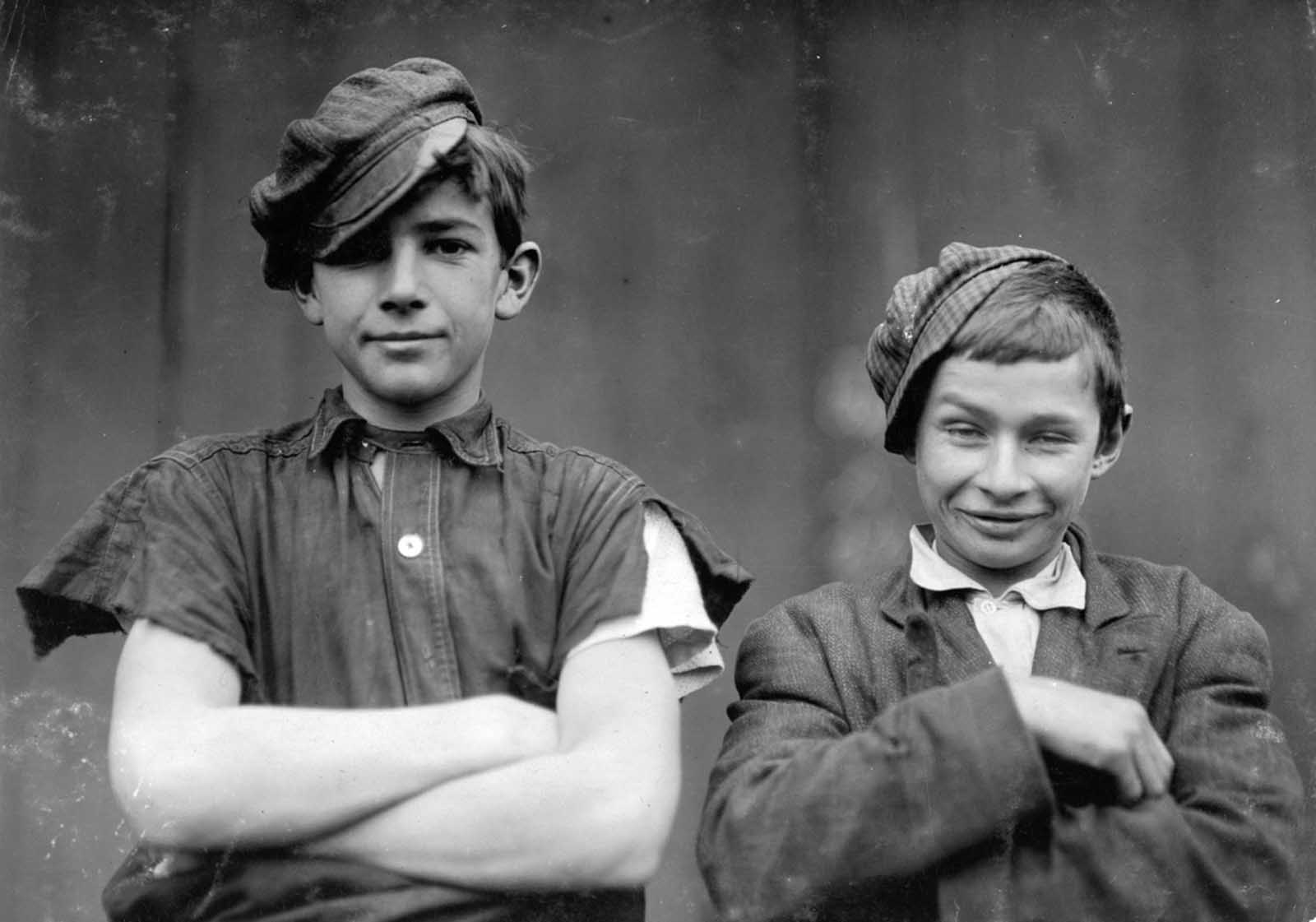 Two of the boys on the night shift in the More-Jones Glass Co., in Bridgeton, New Jersey, in November of 1909. 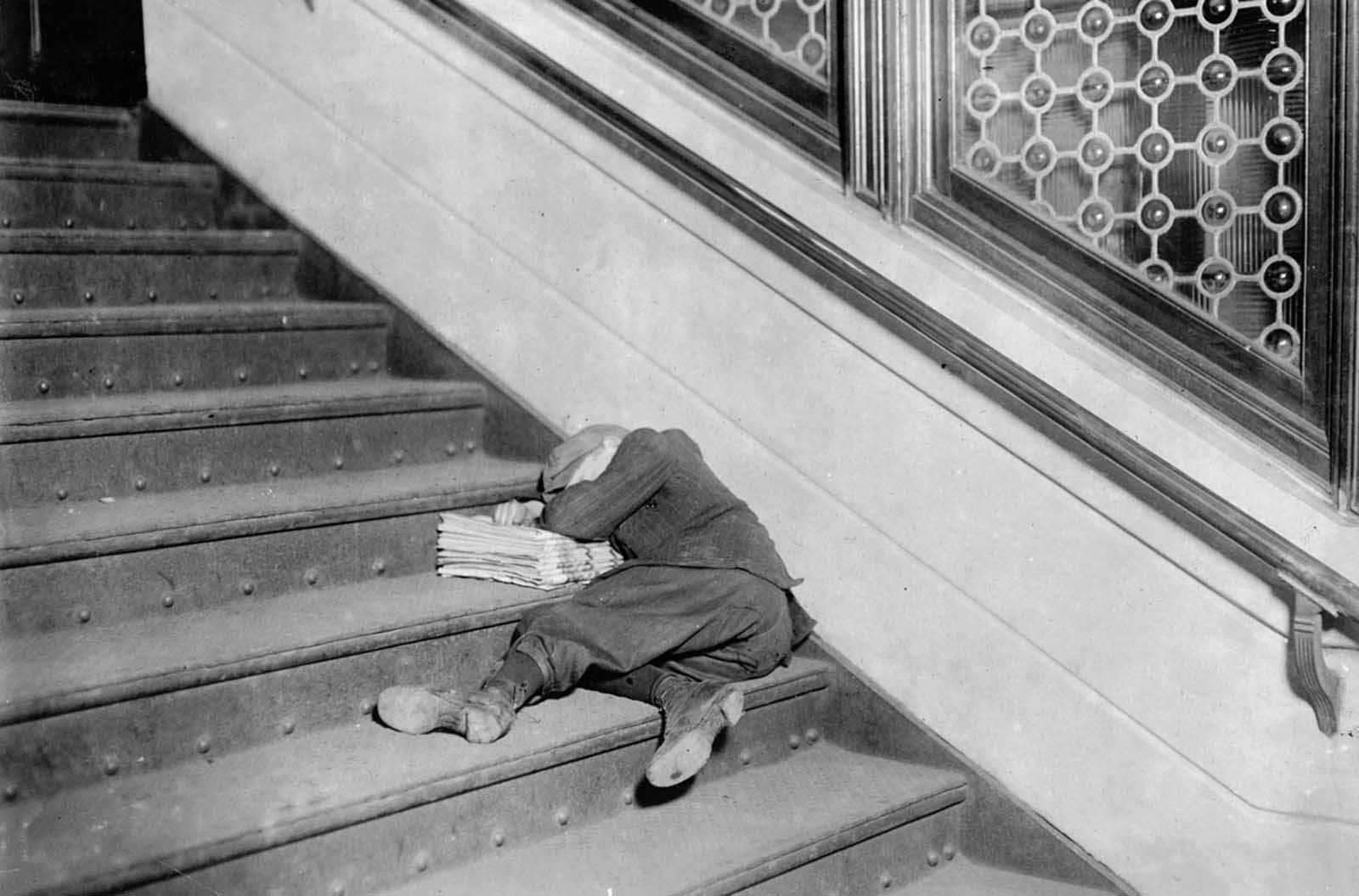 A young newsie asleep on a set of stairs with his papers, in Jersey City, New Jersey, in November of 1912.