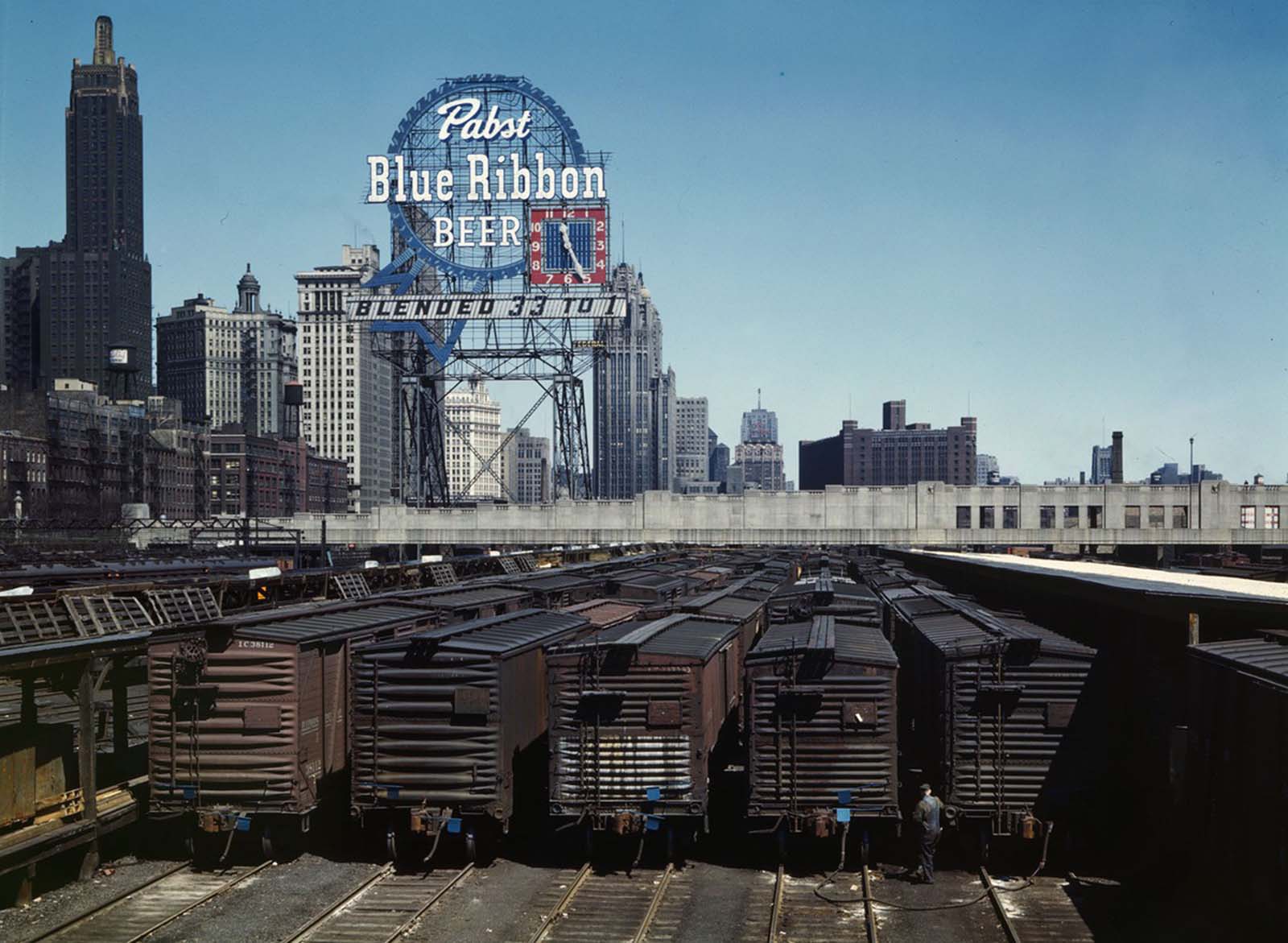 A view of part of the South Water Street freight depot of the Illinois Central Railroad and buildings in downtown Chicago on May 1, 1943.

In 1942 and 1943, the Farm Security Administration photographer Jack Delano spent time in the rail yards of Chicago, documenting the busy freight hub and the workers’ everyday life. The photographs were made on Kodachrome color transparencies creating vibrant and extra colorful shots.

More lines of track radiate in more directions from Chicago than from any other city in the United States. Chicago built its first rail connection in 1848 to connect the Windy City with the lead mines of Galena, Illinois. Later lines connected the city with Detroit, Cleveland, Cincinnati, New Orleans, St. Louis, Kansas City, Omaha, and St. Paul.

Chicago has long been the most important interchange point for freight traffic between the nation’s major railroads and it is the hub of Amtrak, the intercity rail passenger system.

By the beginning of the 20th century, no fewer than 30 interstate routes fanned out from the city, and the resulting ease in reaching both raw materials and markets contributed to the city’s rapid commercial and industrial development.

Most important of all, Chicago was the terminus of every one of the railroads; passengers, raw materials, and finished goods all had to be transferred between lines in the city, thus contributing to an extraordinary development of hotels, restaurants, taxicabs, warehouses, rail yards, and trucking companies. 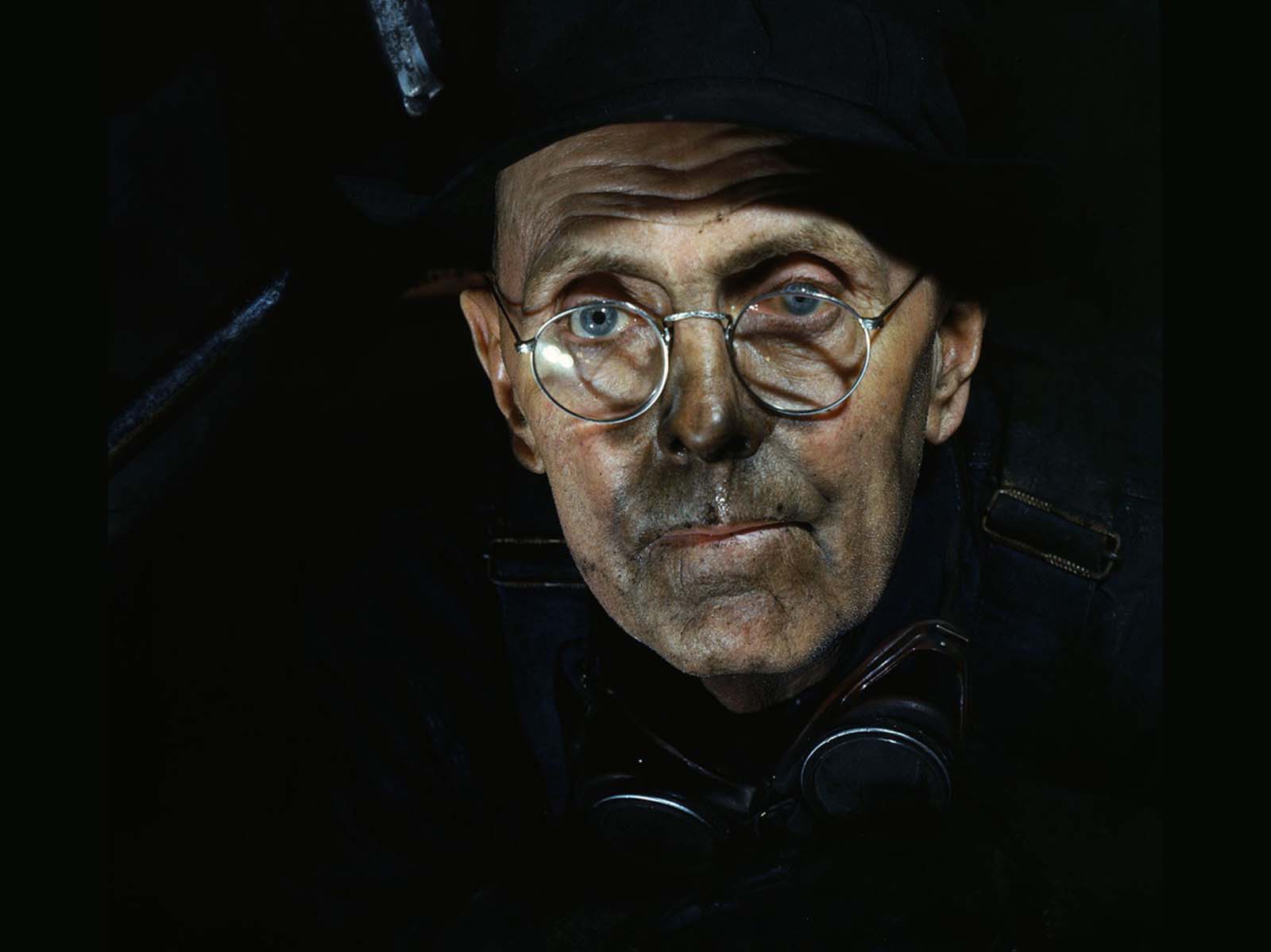 L. Logan, of West Chicago, a boilermaker at the roundhouse in the Proviso yard in Melrose Park, near Chicago, photographed in December 1942.

Railroads were especially important as haulers of grain and livestock, which helped Chicago gain a primary role in the grain marketing and meatpacking industries.

Trade encouraged ancillary industries such as the manufacture of steel rails and railroad equipment, shipbuilding, packaging, and printing, as well as the development of hotels and restaurant facilities.

The largest of these yards include Proviso and Bensenville on the western edge of the city, Clearing Yard in Bedford Park, Barr and Blue Island Yards on the far South Side, and Corwith Yard near the Stevenson Expressway.

Until the 1960s the Chicago Loop contained six major railroad terminals for intercity rail passenger traffic. Passengers traveling between the East and West Coasts often had half a day to spend in Chicago between trains and took advantage of the time by sightseeing. 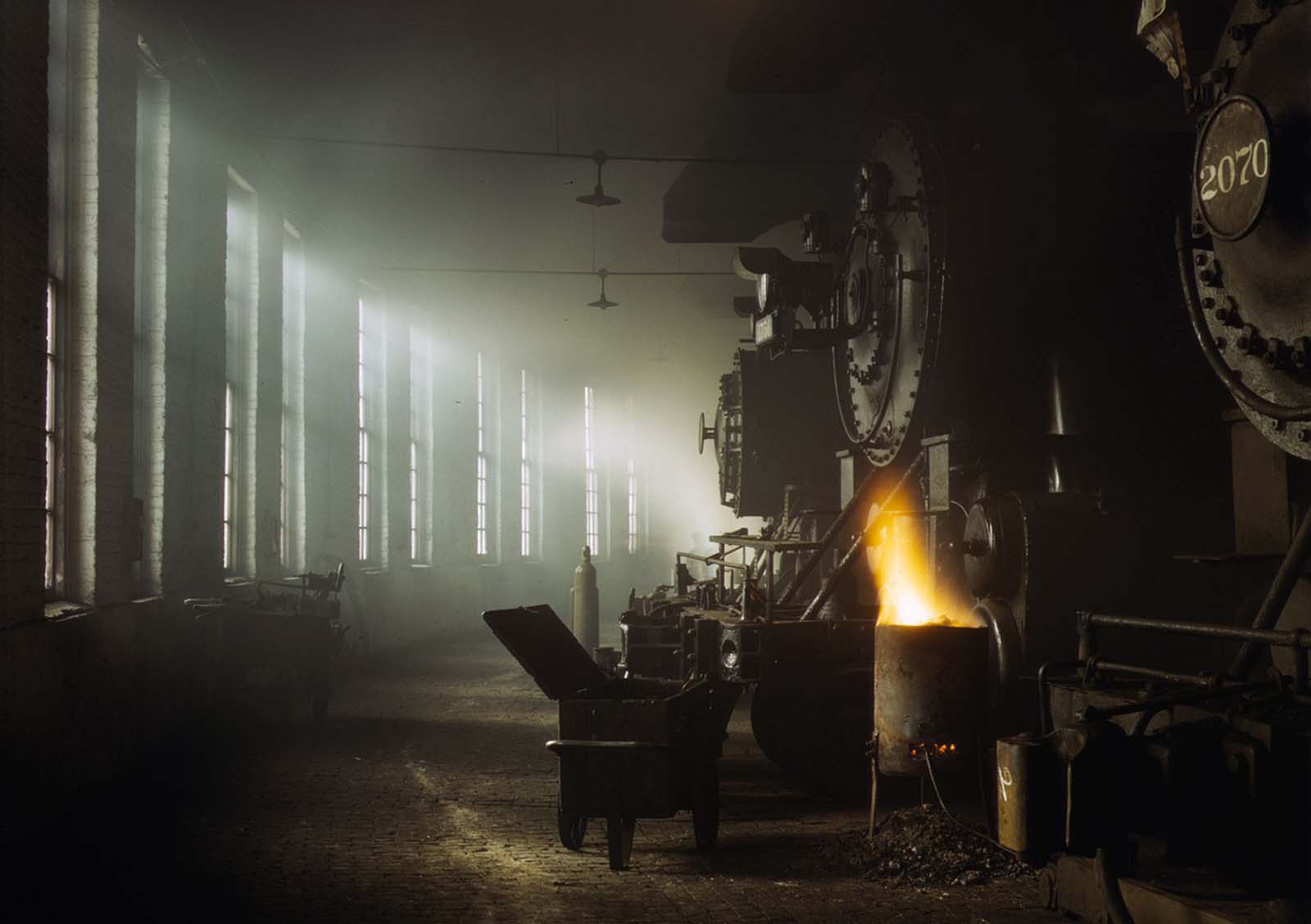 In the roundhouse of a Chicago and North Western Railroad yard in December 1942. 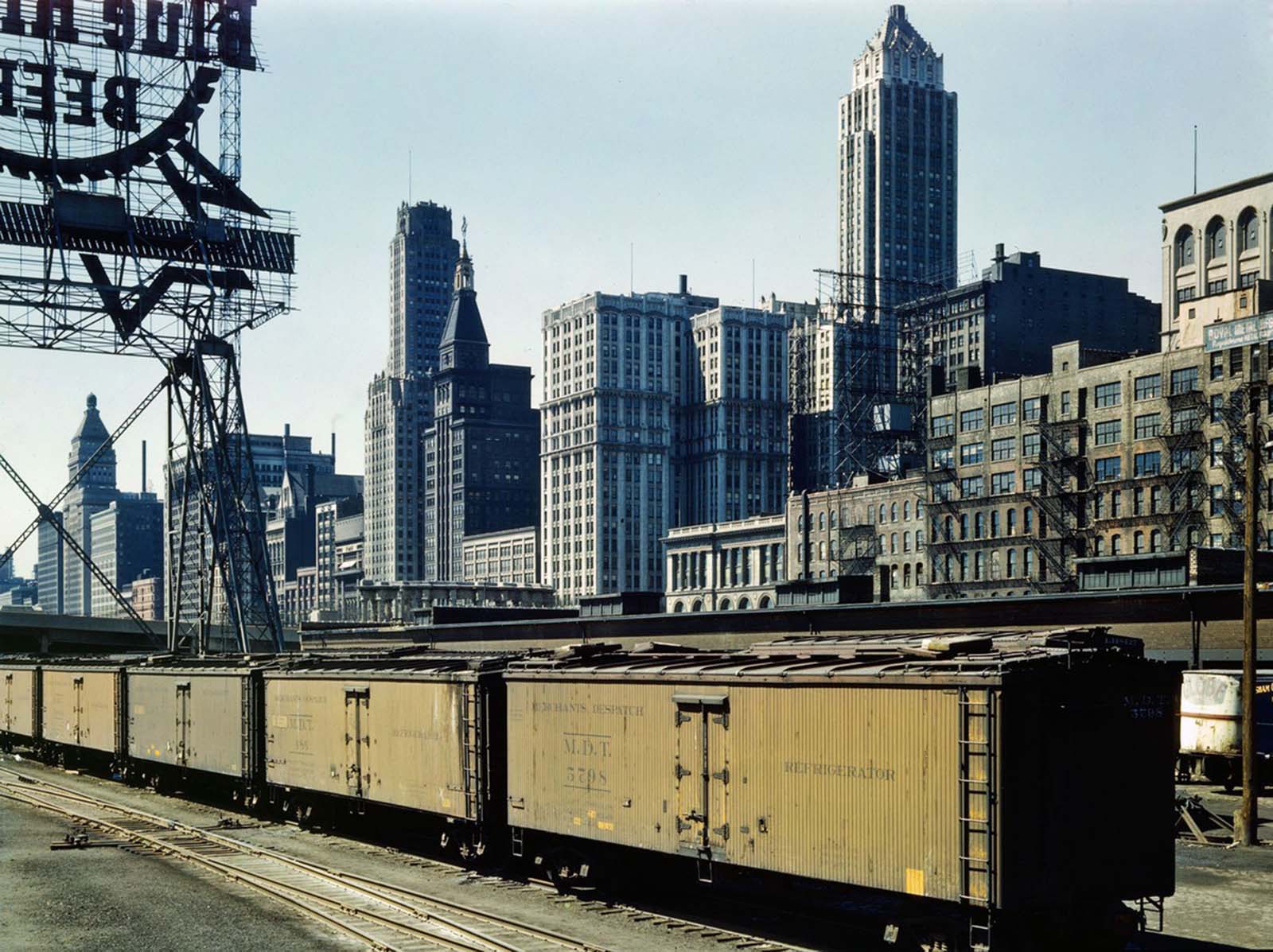 A view of part of the South Water Street Illinois Central Railroad freight terminal in April 1943. 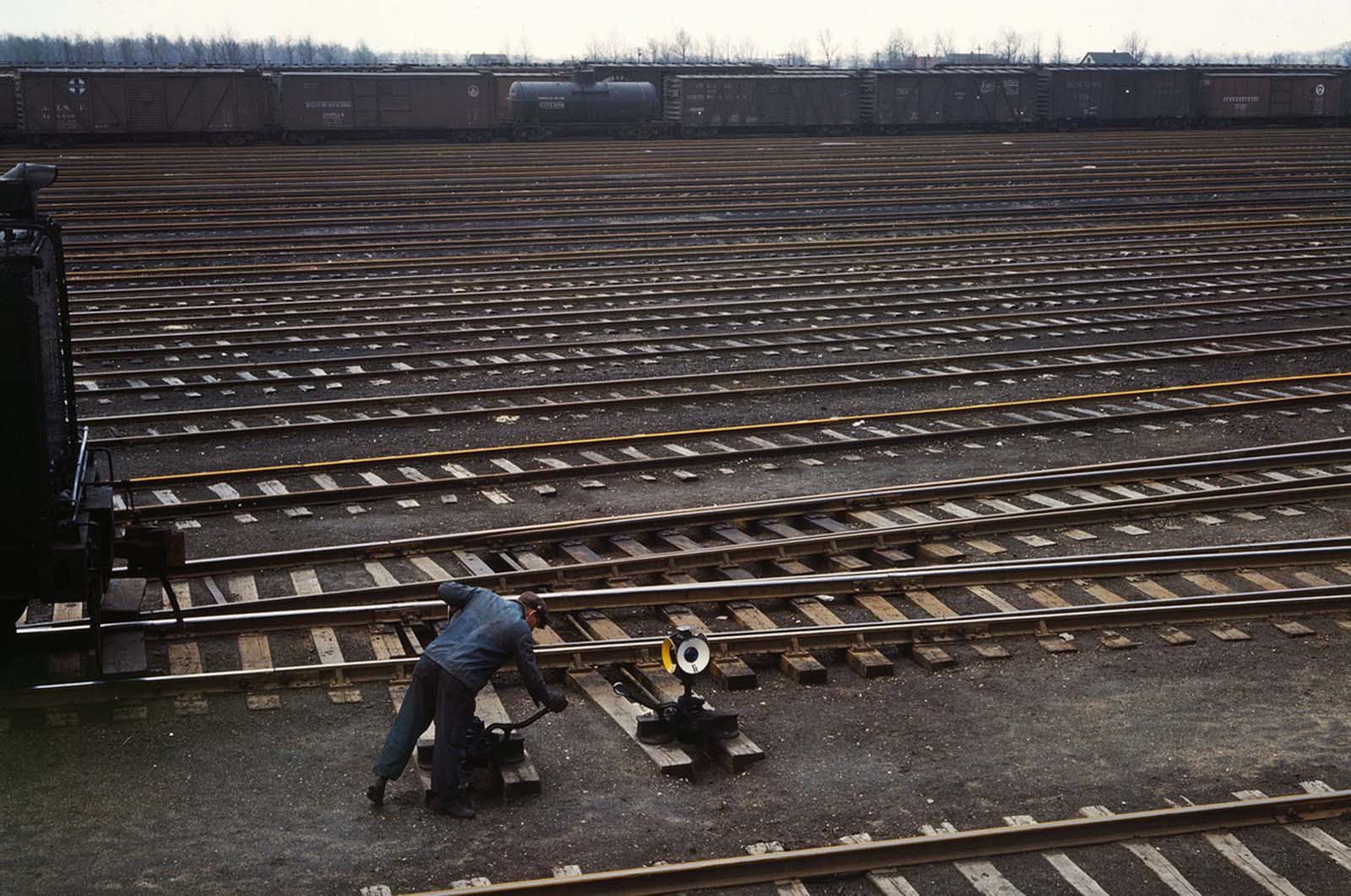 A switchman throwing a switch at Chicago and North Western Railroad’s Proviso yard in April 1943. 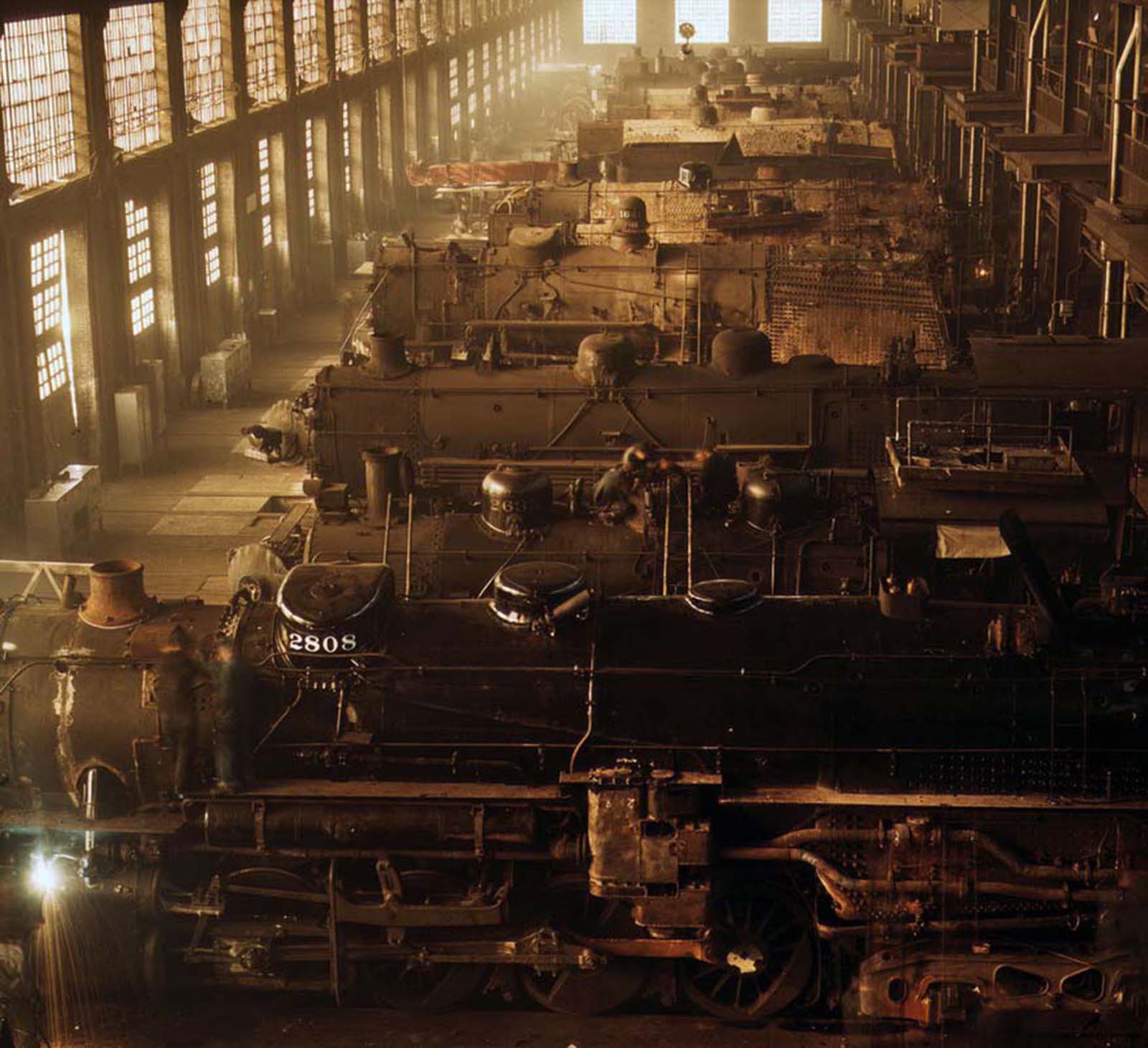 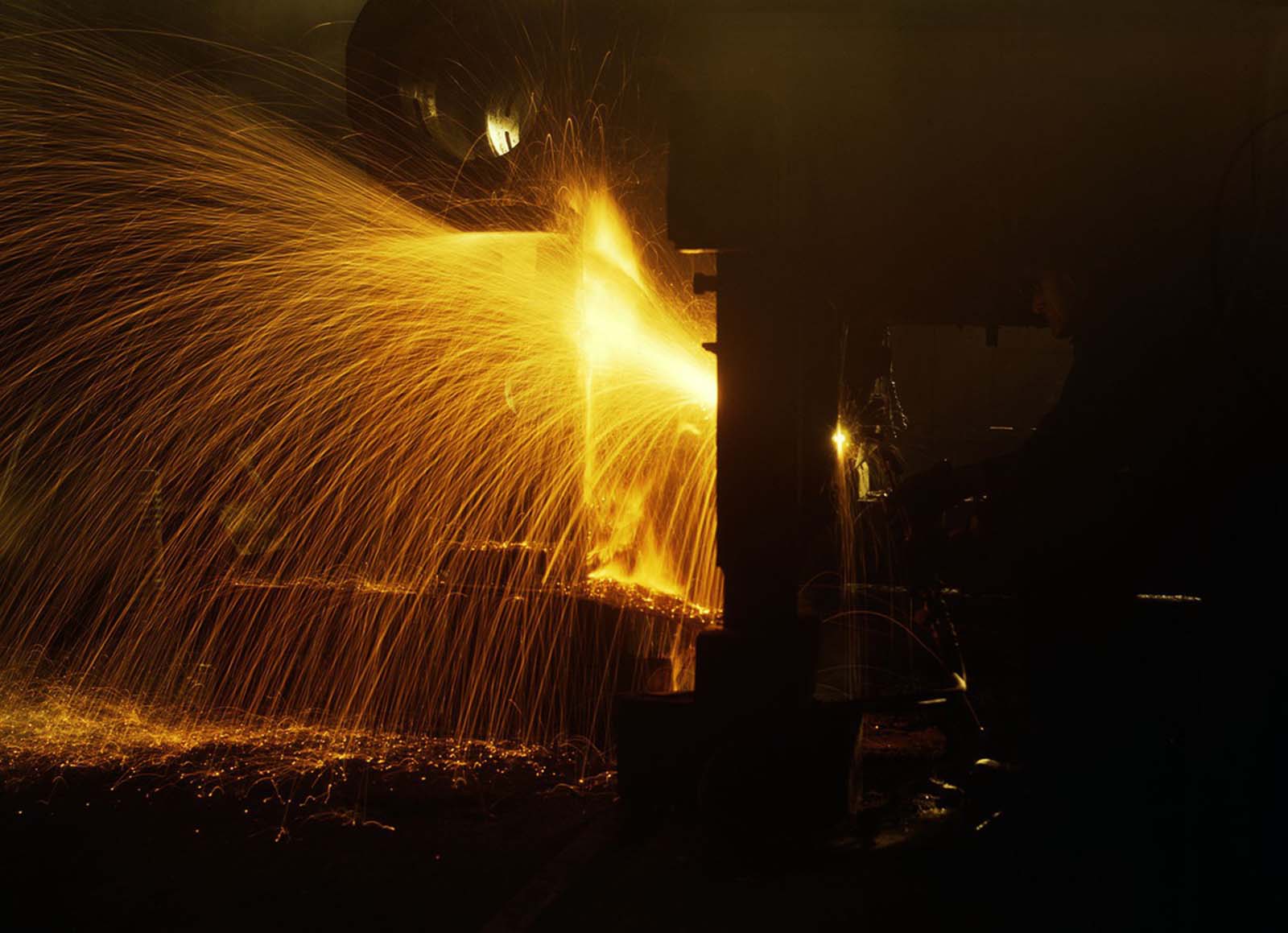 A welder works in the roundhouse of the Chicago and North Western Railroad’s Proviso yard in December 1942. 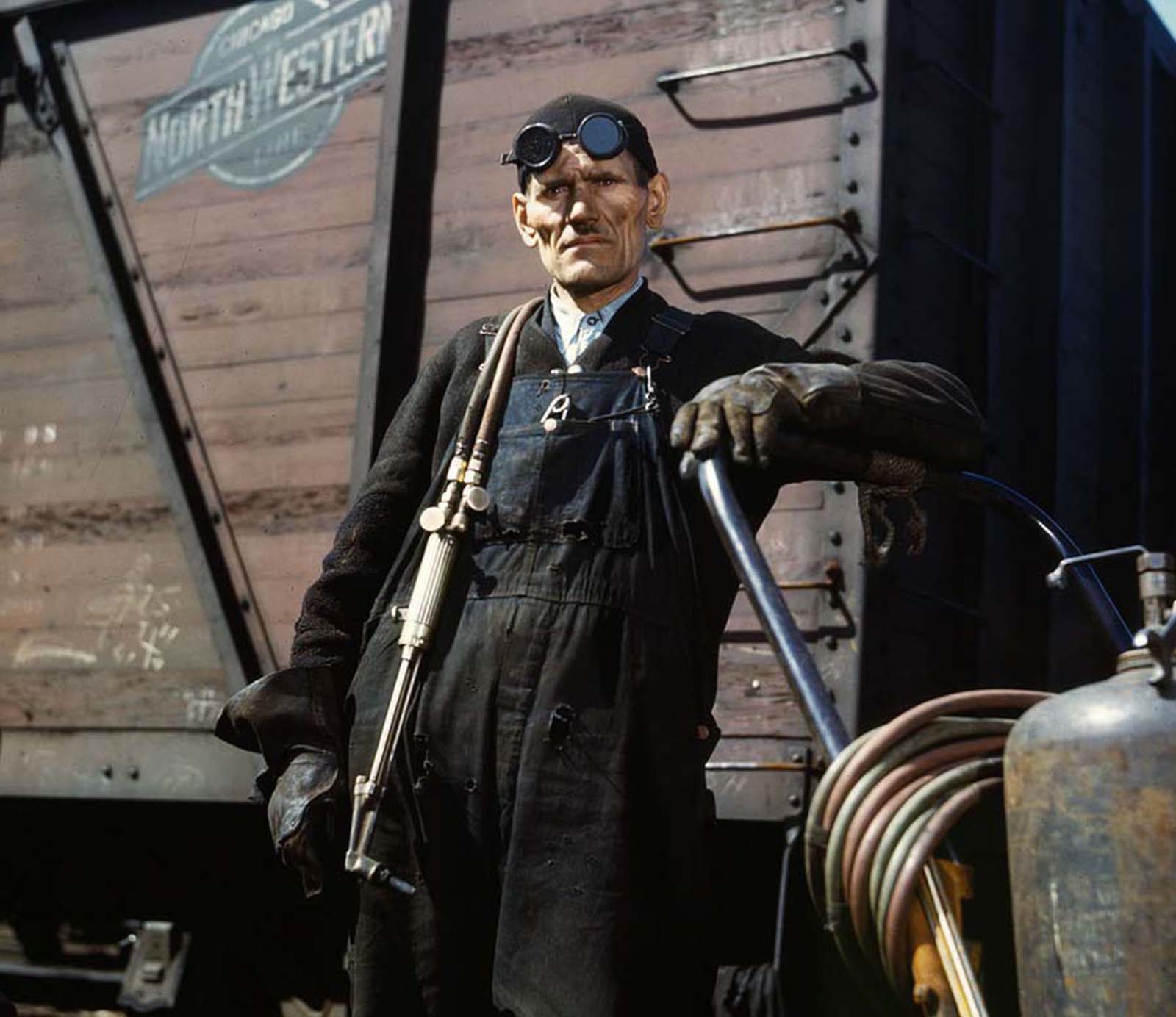 Mike Evans, a welder, at the rip tracks at the Proviso yard, photographed in April 1943. 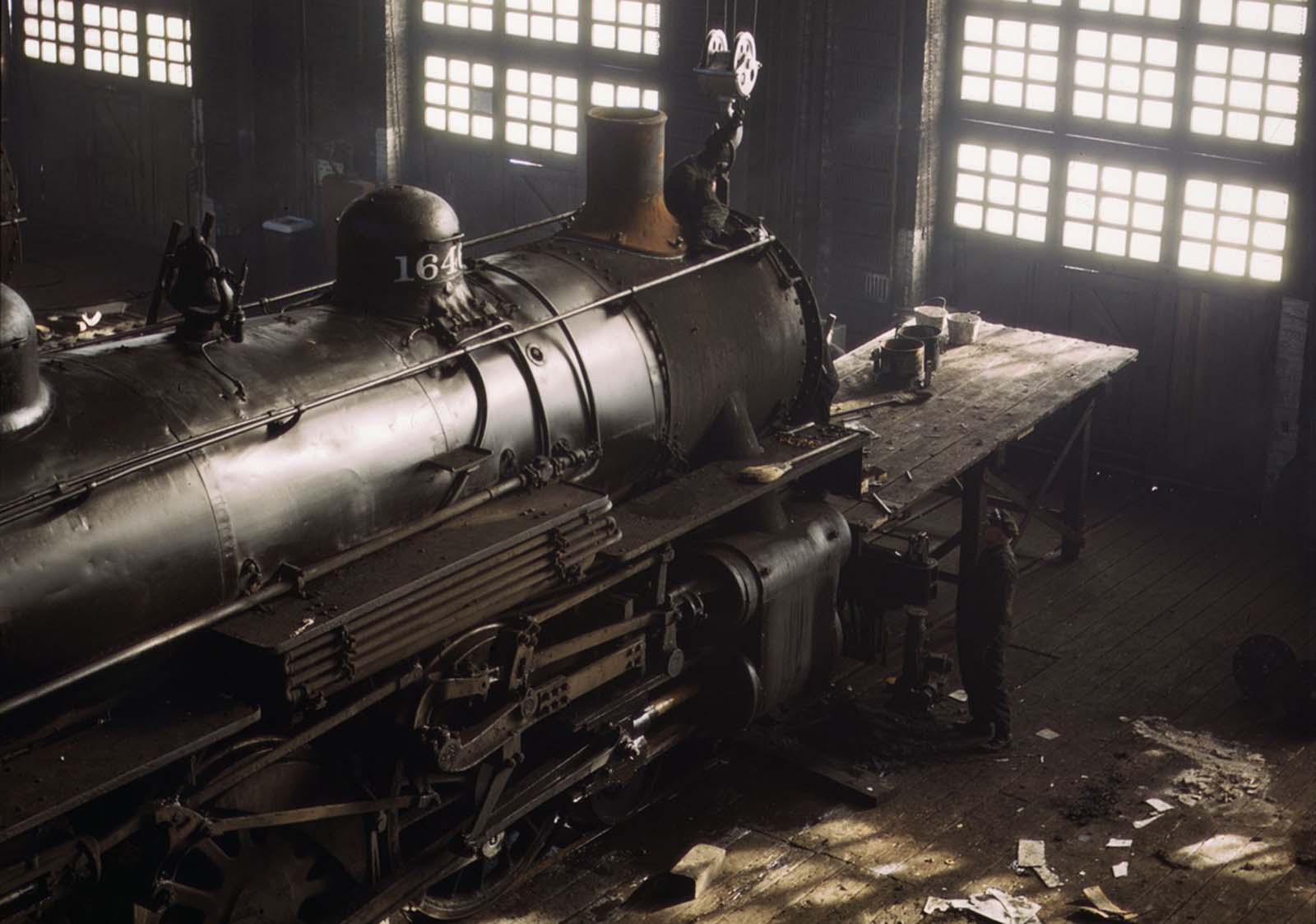 Working on a locomotive at the 40th Street railroad shops in Chicago in December 1942. 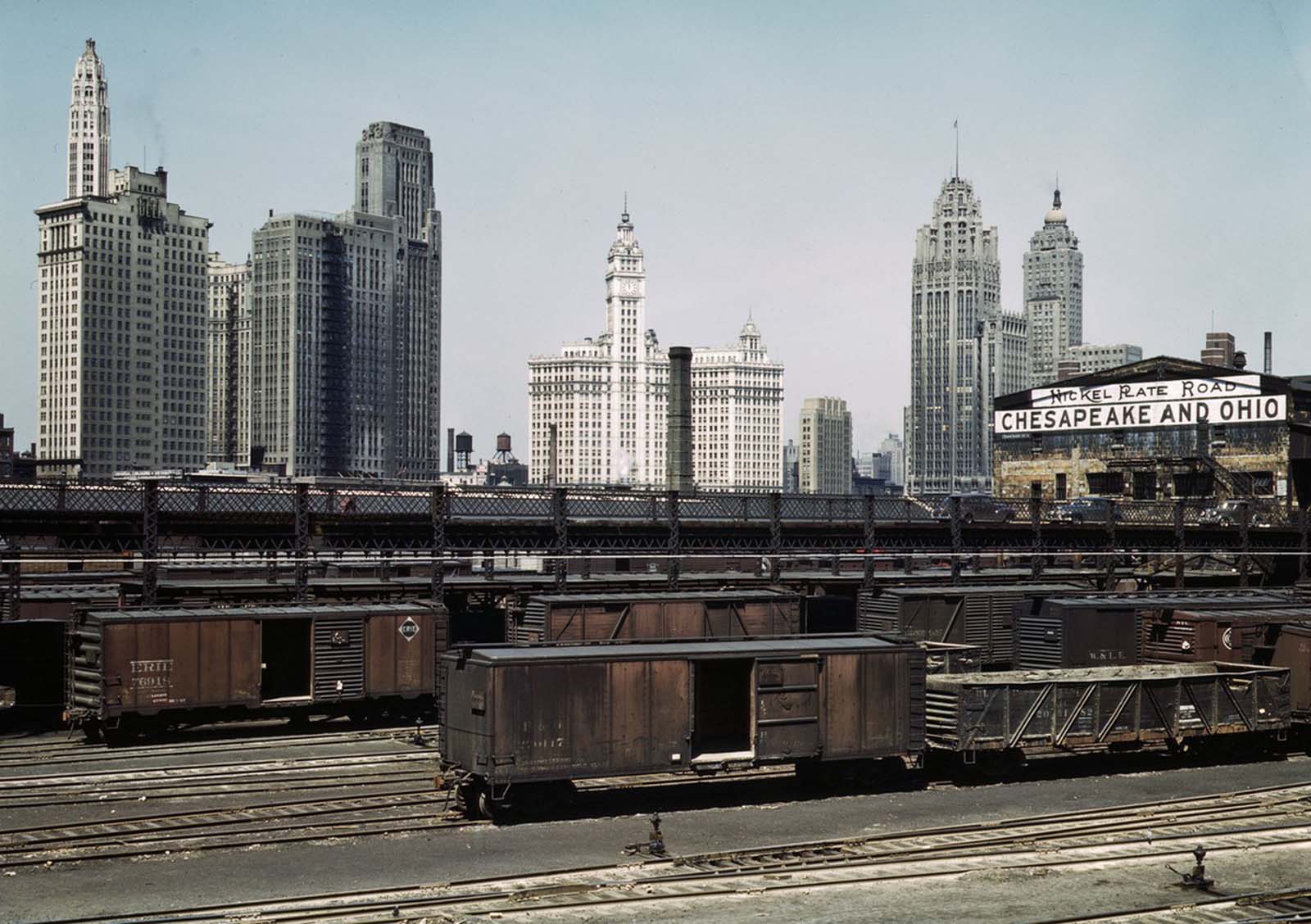 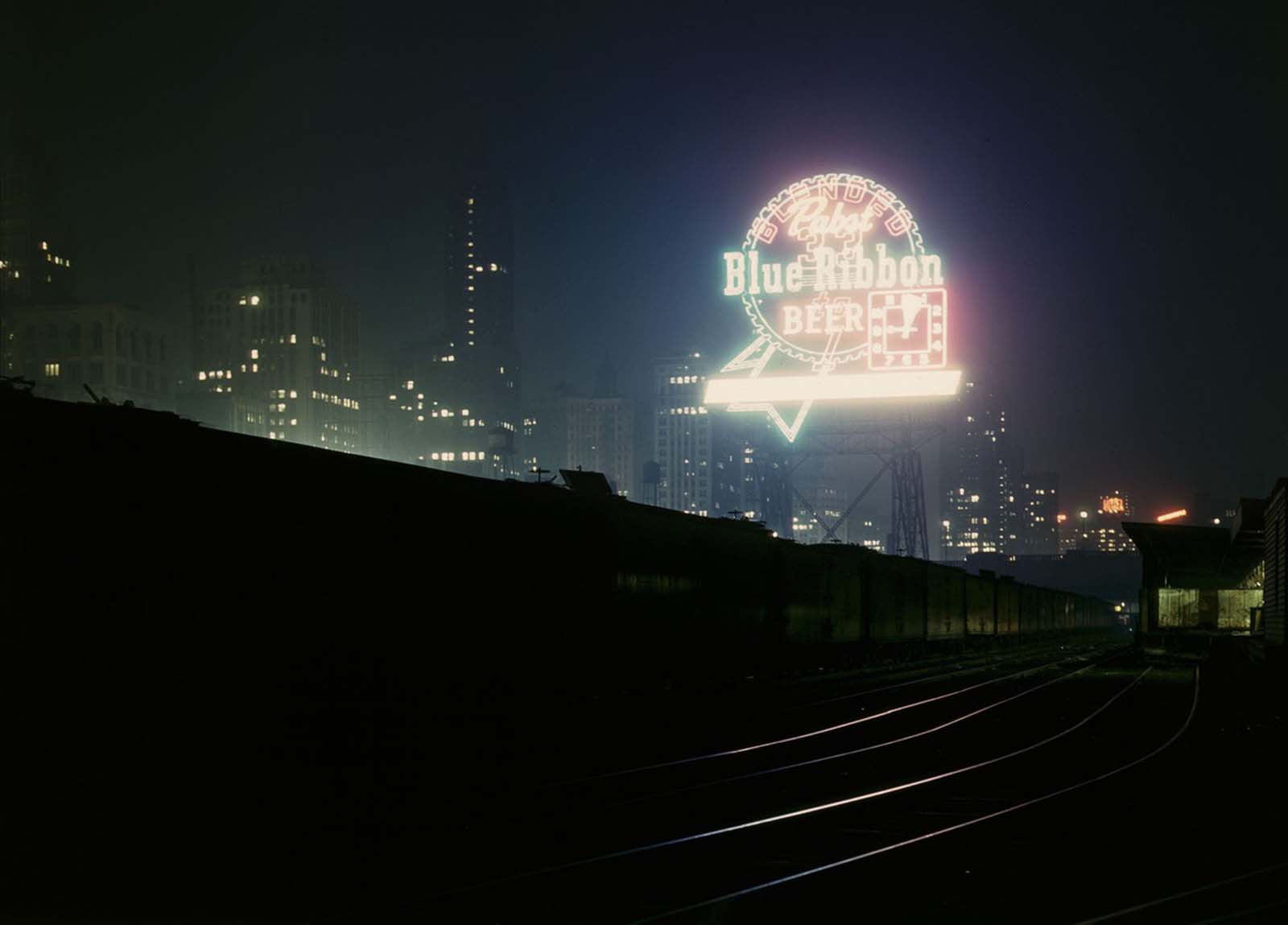 The night is lit up by a giant Pabst Blue Ribbon sign above Chicago’s South Water Street freight terminal in April 1943. 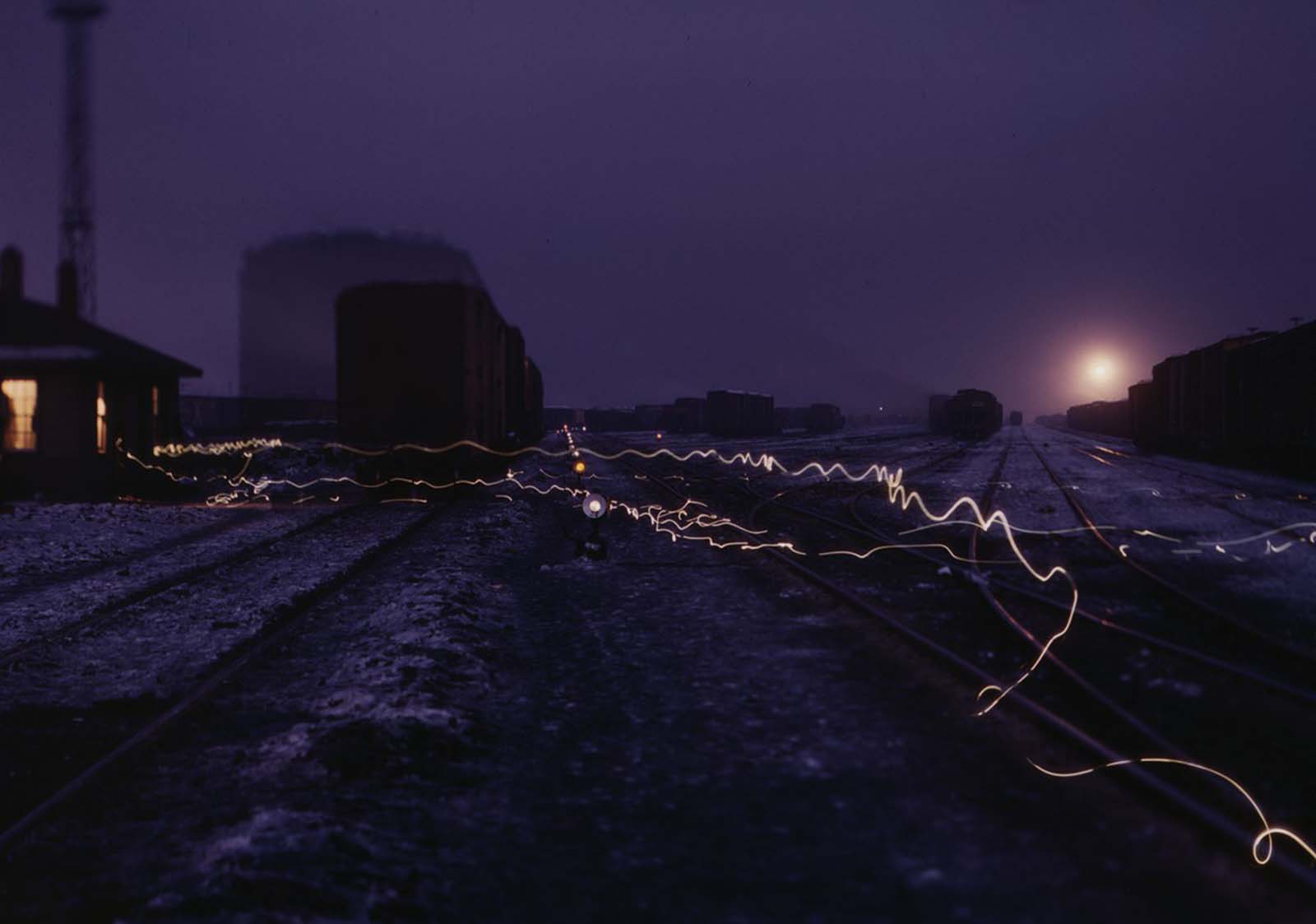 A long-exposure view of lantern lights in a departure yard in Chicago and North Western Railroad’s Proviso yard at twilight in December 1942. 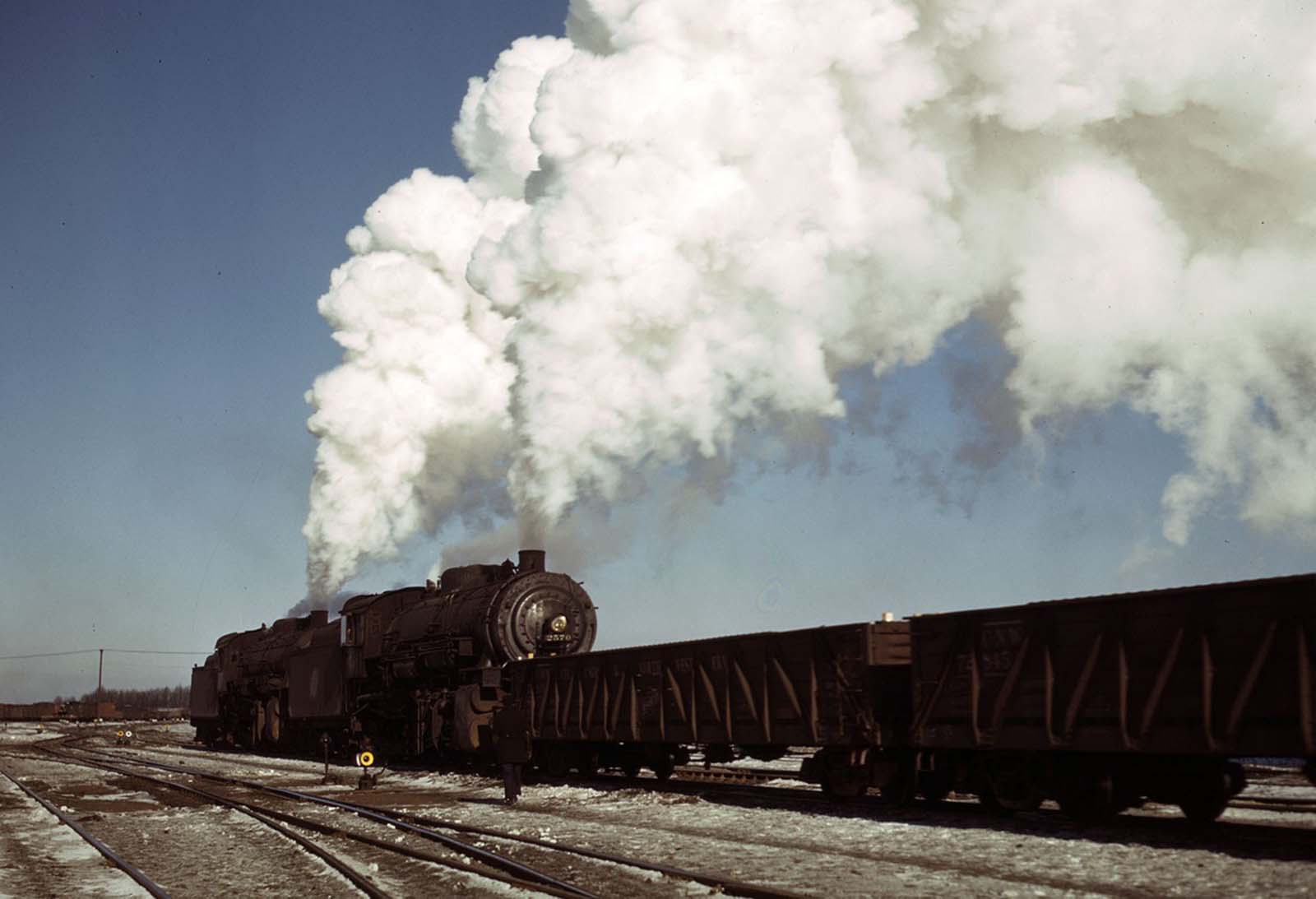 Locomotives in a Chicago and North Western Railroad yard near Chicago sometime between December 1942 and May 1943. 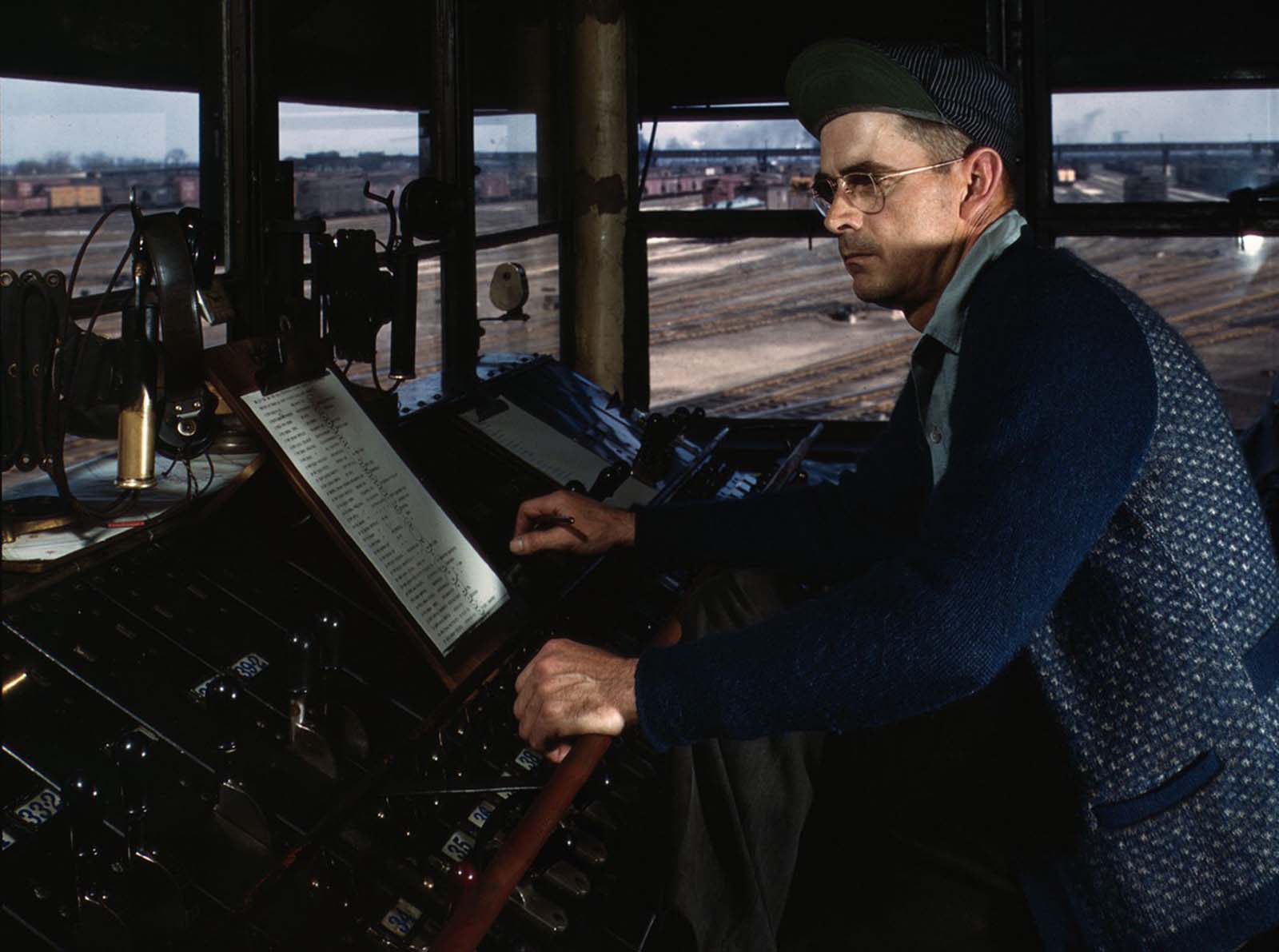 The Chicago and North Western Railroad tower man R. W. Mayberry of Elmhurst, Illinois, at work in the Proviso yard in May 1943. He operates a set of retarders and switches at the hump. 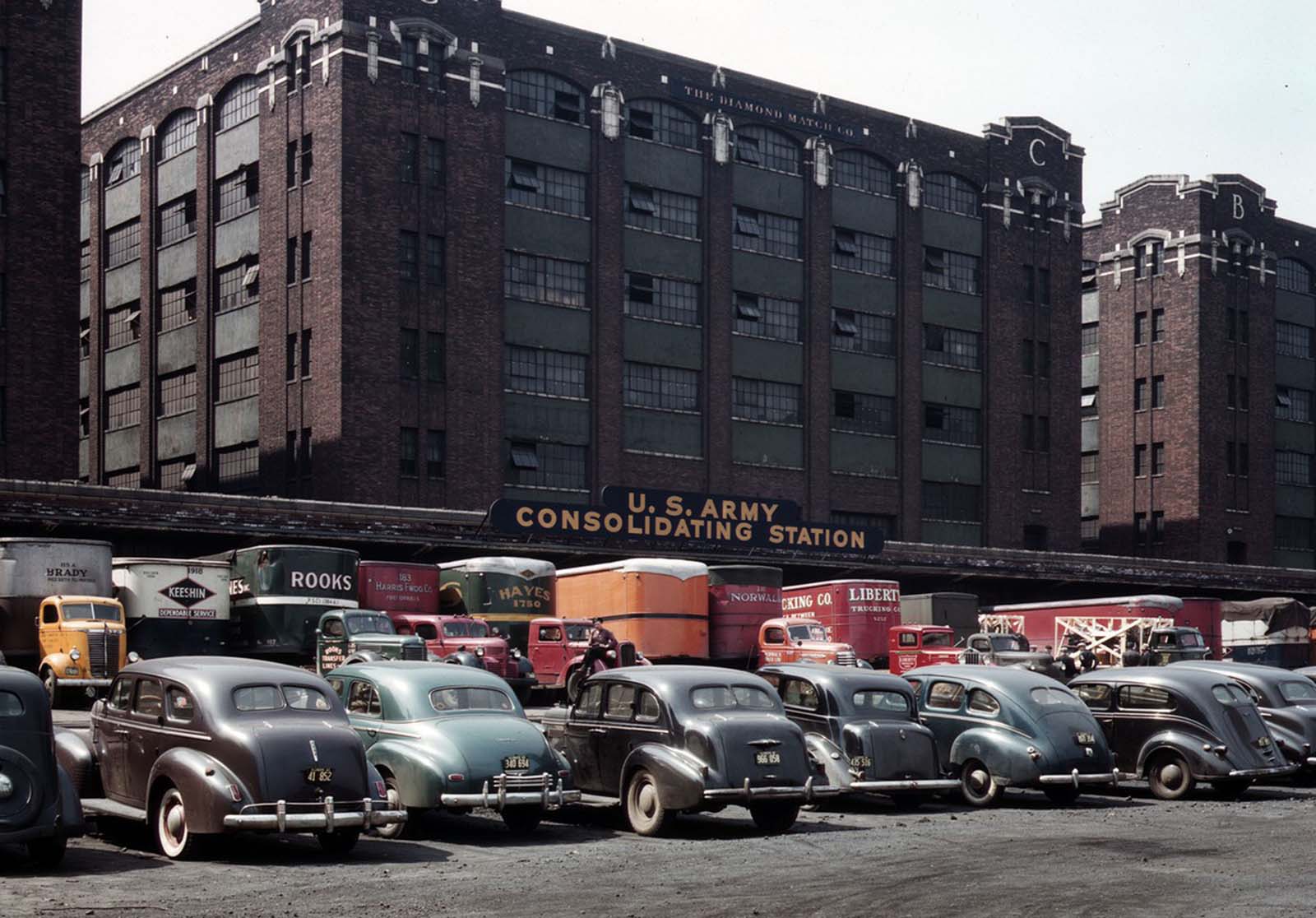 The freight depot of the U.S. Army consolidating station in Chicago in April 1943. 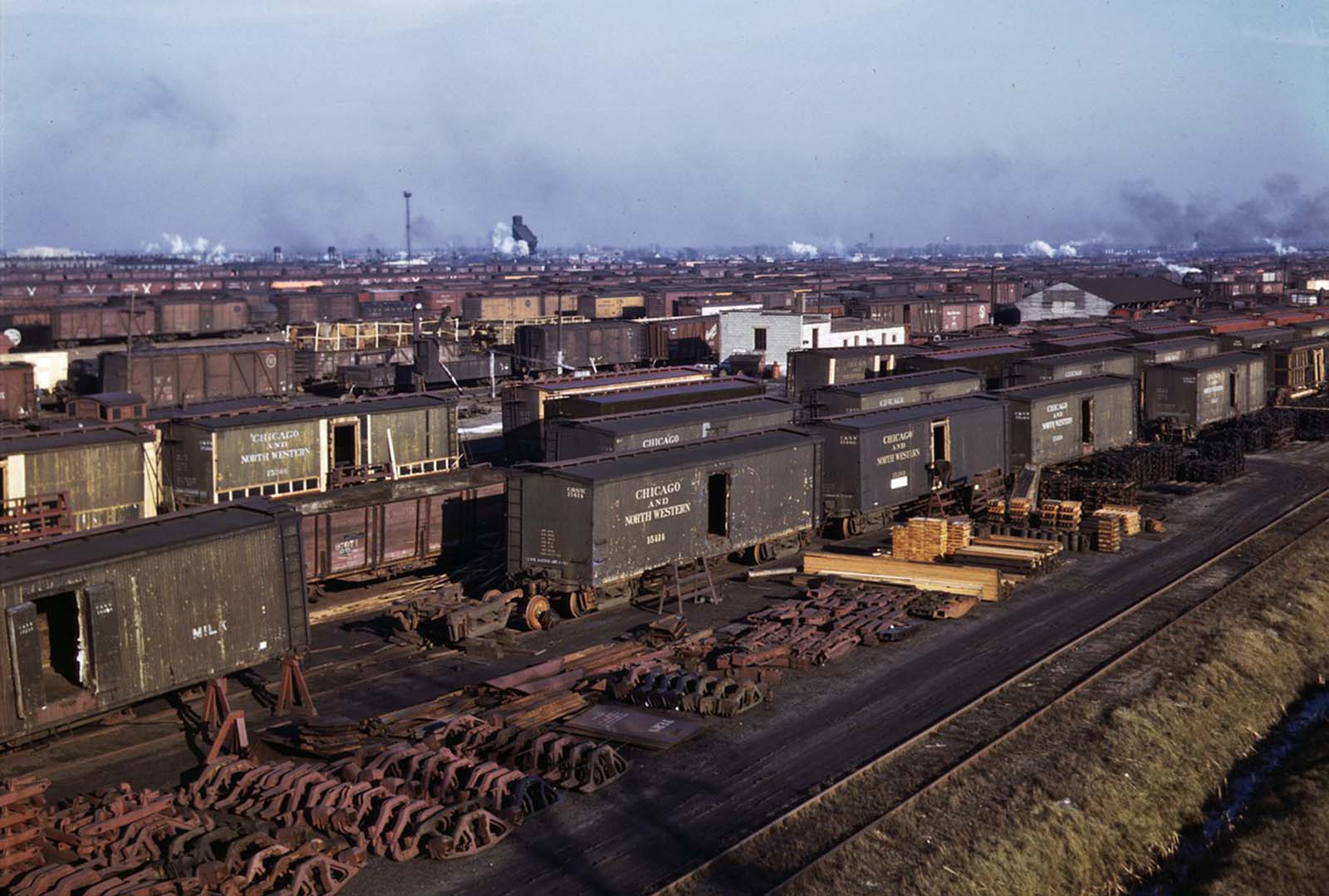 Freight cars are maneuvered in a Chicago and North Western Railroad yard in December 1942. 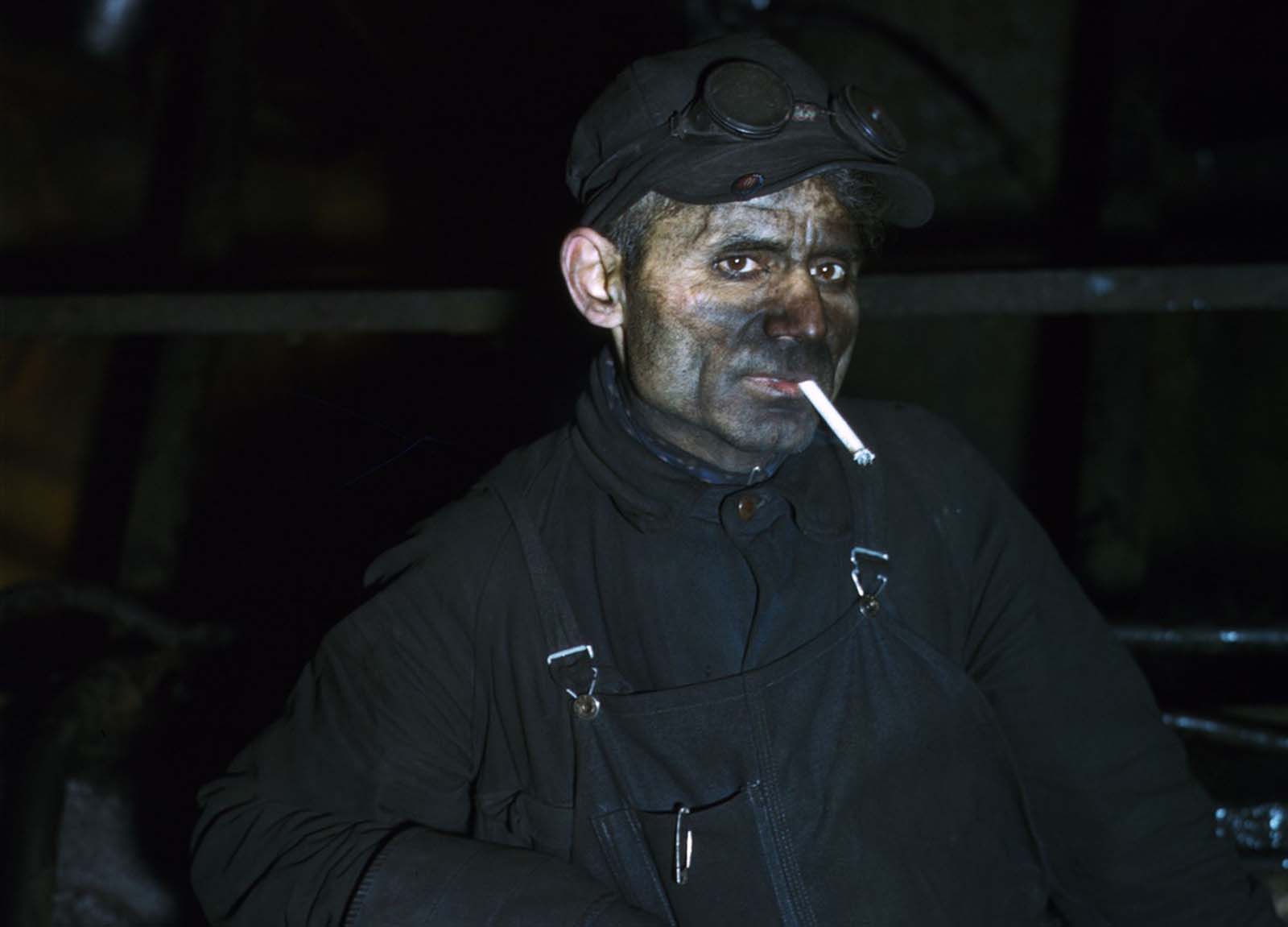 William London has been a railroad worker for 25 years, now working at the roundhouse at the Proviso yard. Photographed in December 1942. 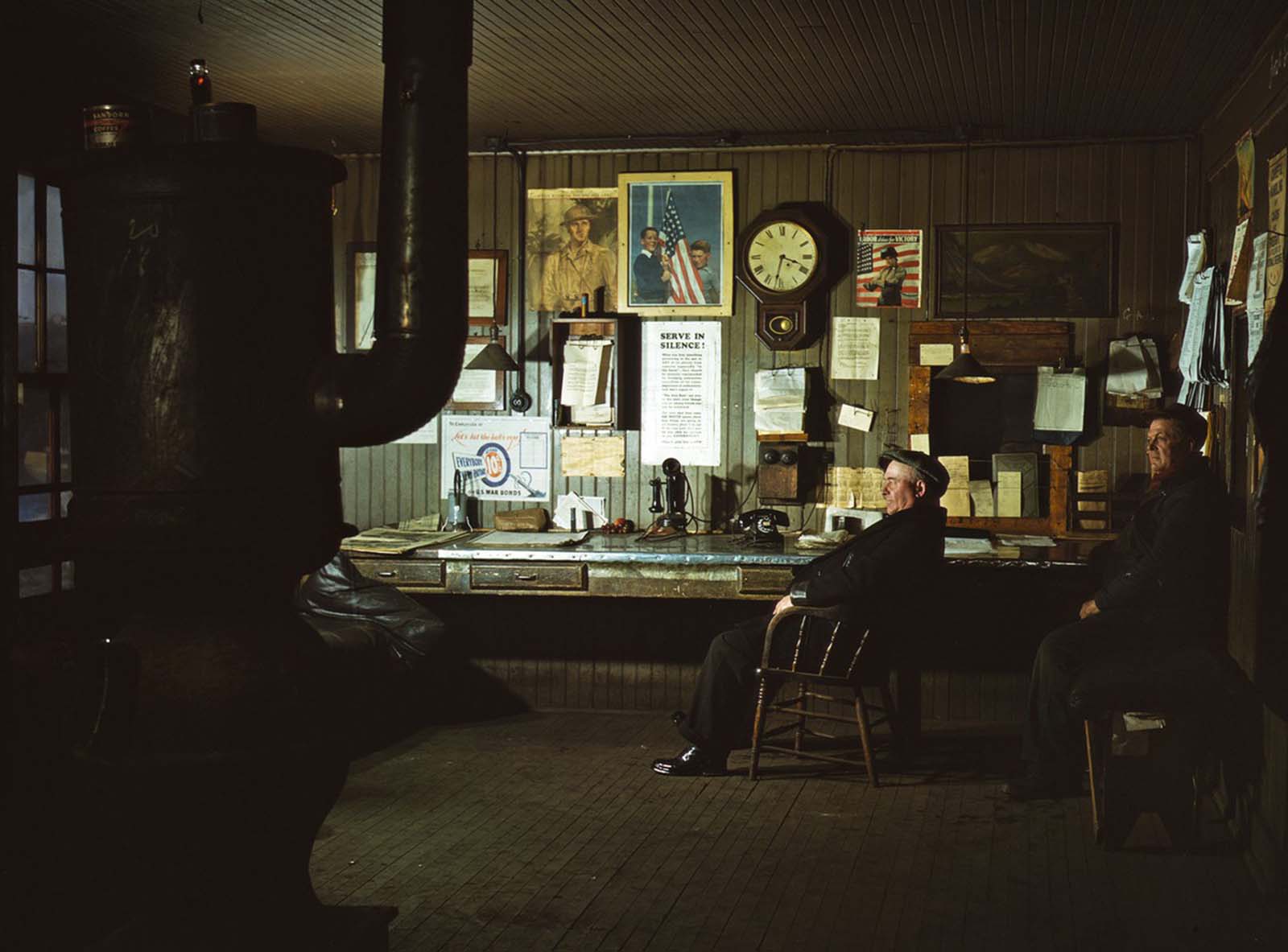 The yardmaster’s office at the receiving yard in North Proviso in December 1942. 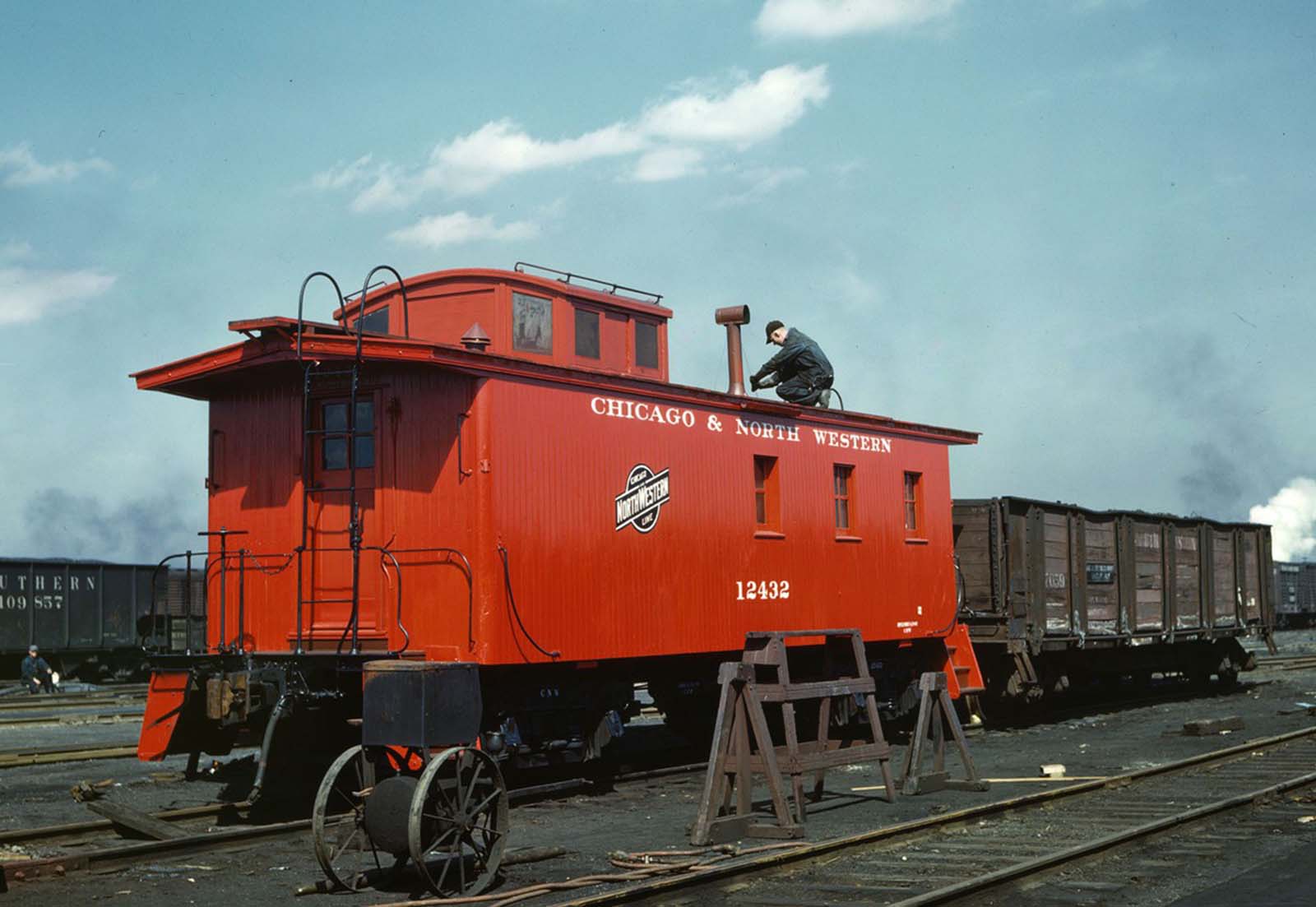 Putting the finishing touches on a rebuilt Chicago and North Western Railroad caboose at the rip tracks in the Proviso yard in Chicago in April 1943. 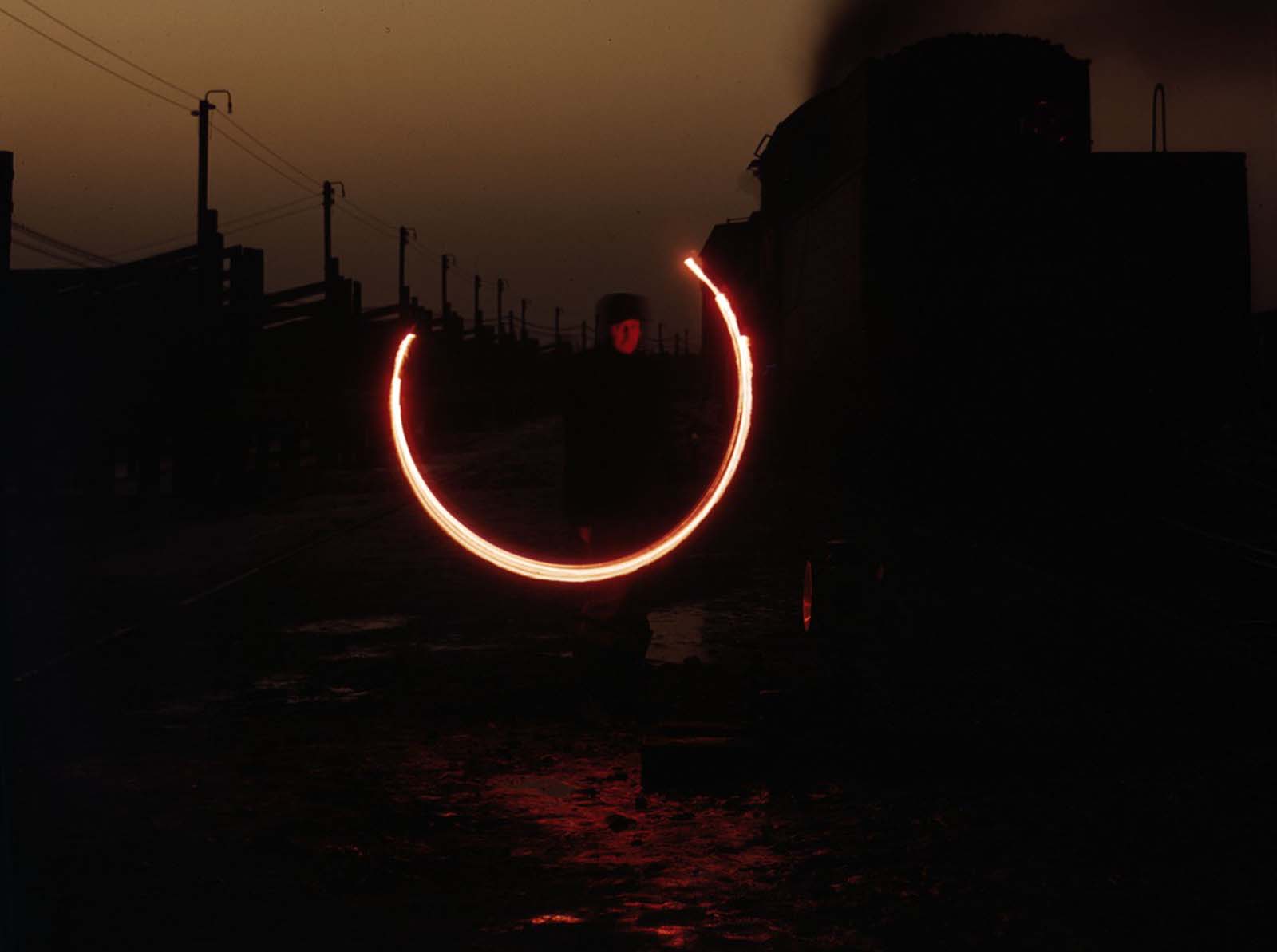 An Indiana Harbor Belt Railroad switchman demonstrating a signal with a fusee, which is used at twilight and dawn when visibility is poor. This signal means “stop.” Photographed in Calumet City in January 1943. 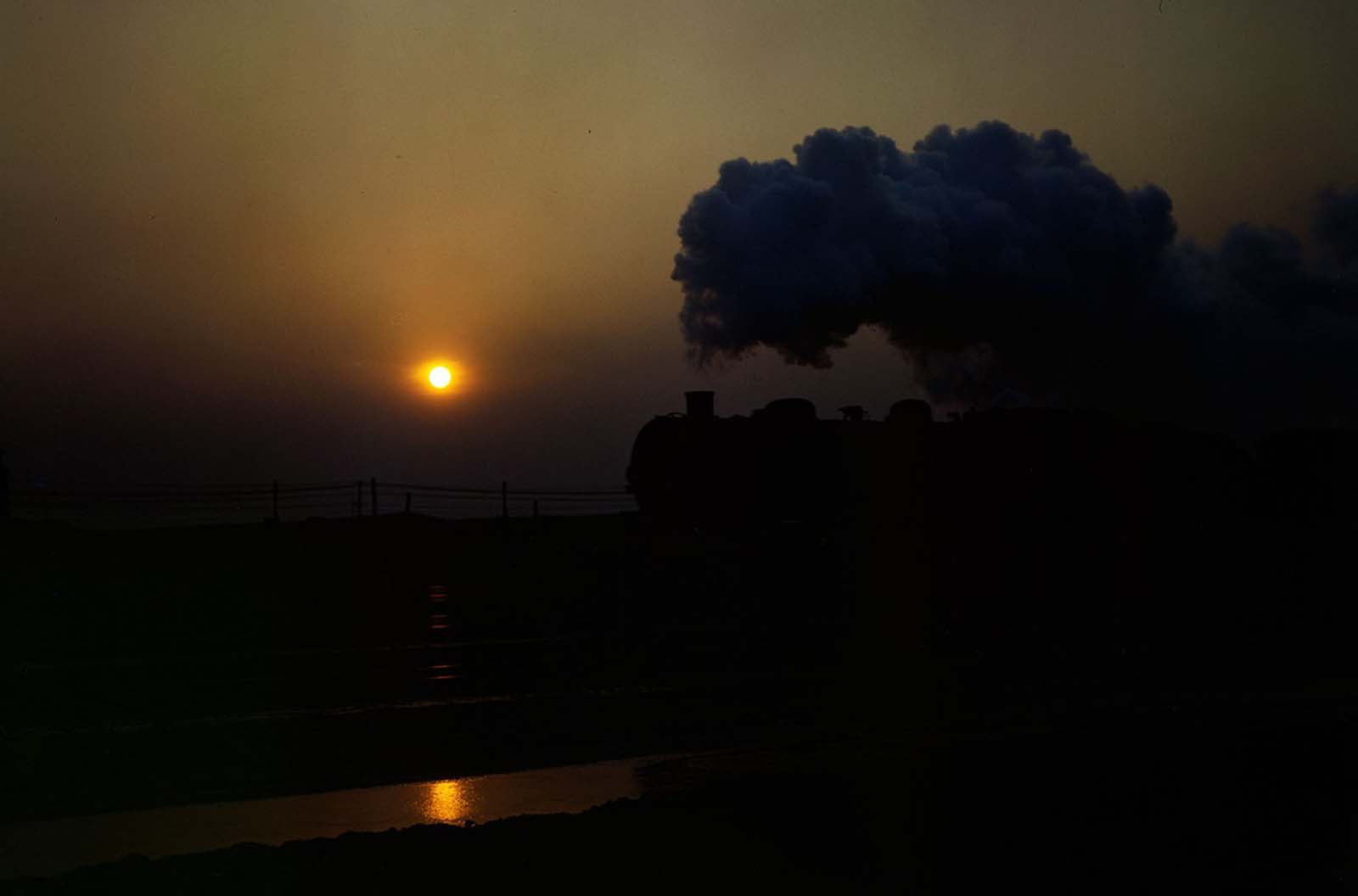 An Indiana Harbor Belt Railroad switch engine in a yard near the Calumet Park stockyards in Calumet City, near Chicago, in January 1943.