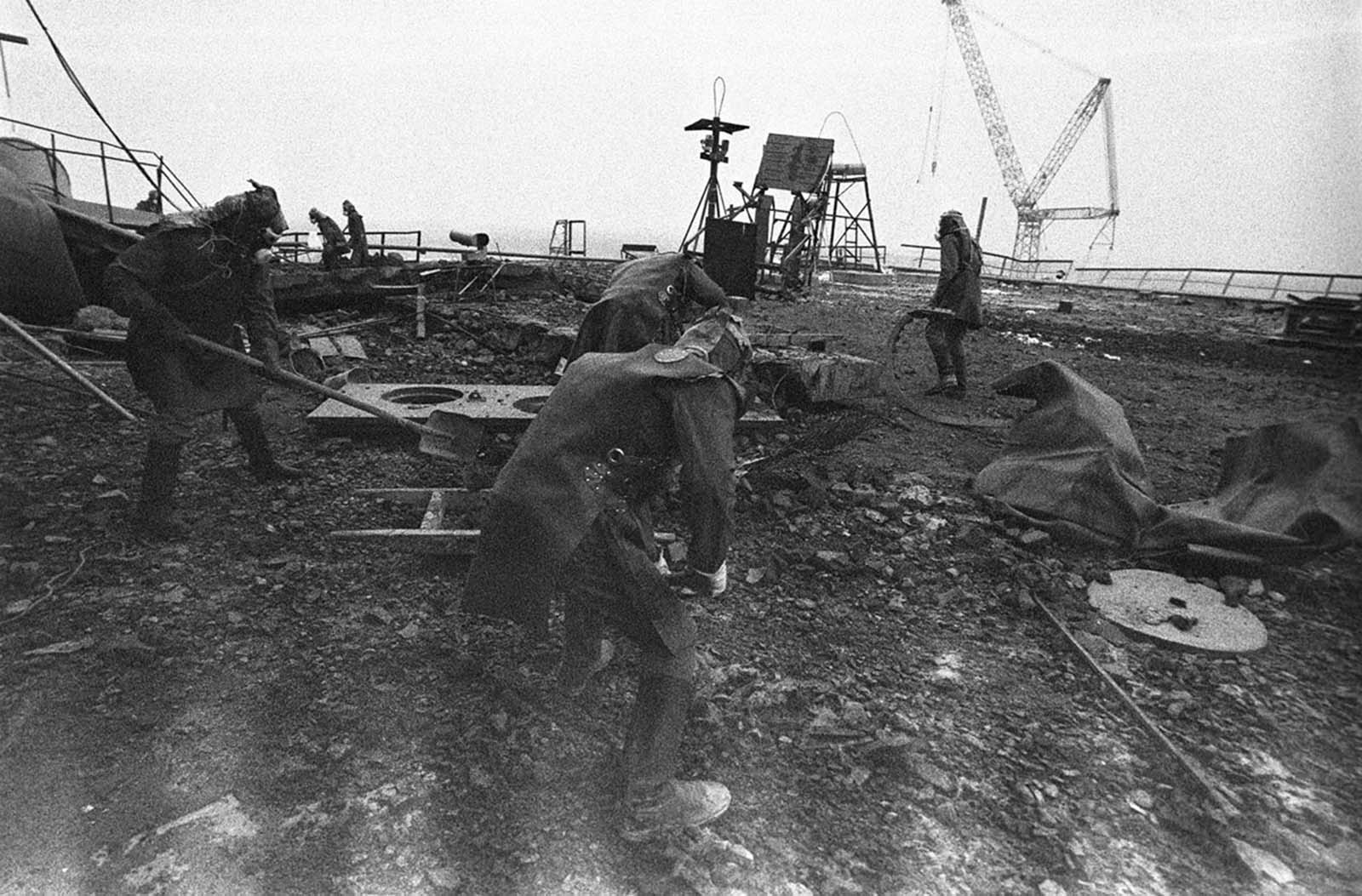 Liquidators clean the roof of the No. 3 reactor. At first, workers tried clearing the radioactive debris from the roof using West German, Japanese, and Russian robots, but the machines could not cope with the extreme radiation levels so authorities decided to use humans. In some areas, workers could not stay any longer than 40 seconds before the radiation they received reached the maximum authorized dose a human being should receive in his entire life.

On April 26, 1986, a series of explosions destroyed Chernobyl’s reactor No. 4, and several hundred staff and firefighters tackled a blaze that burned for 10 days and sent a plume of radiation around the world. More than 50 reactor and emergency workers were killed in the immediate aftermath.

The workers and emergency responders were not the only ones to risk their lives—a handful of photographers went to the scene as well, managing to capture images of some of the chaos and acts of heroism that took place in the weeks and months that followed.

Emergency crews responding to the accident used helicopters to pour sand and boron on the reactor debris. The sand was to stop the fire and additional releases of radioactive material; the boron was to prevent additional nuclear reactions.

A few weeks after the accident, the crews completely covered the damaged unit in a temporary concrete structure, called the “sarcophagus,” to limit the further release of radioactive material.

The Soviet government also cut down and buried about a square mile of pine forest near the plant to reduce radioactive contamination at and near the site.

Chernobyl’s three other reactors were subsequently restarted but all eventually shut down for good, with the last reactor closing in 1999. The Soviet nuclear power authorities presented their initial accident report to an International Atomic Energy Agency meeting in Vienna, Austria, in August 1986.

After the accident, officials closed off the area within 30 kilometers (18 miles) of the plant, except for persons with official business at the plant and those people evaluating and dealing with the consequences of the accident and operating the undamaged reactors.

The Soviet (and later on, Russian) government evacuated about 115,000 people from the most heavily contaminated areas in 1986, and another 220,000 people in subsequent years. 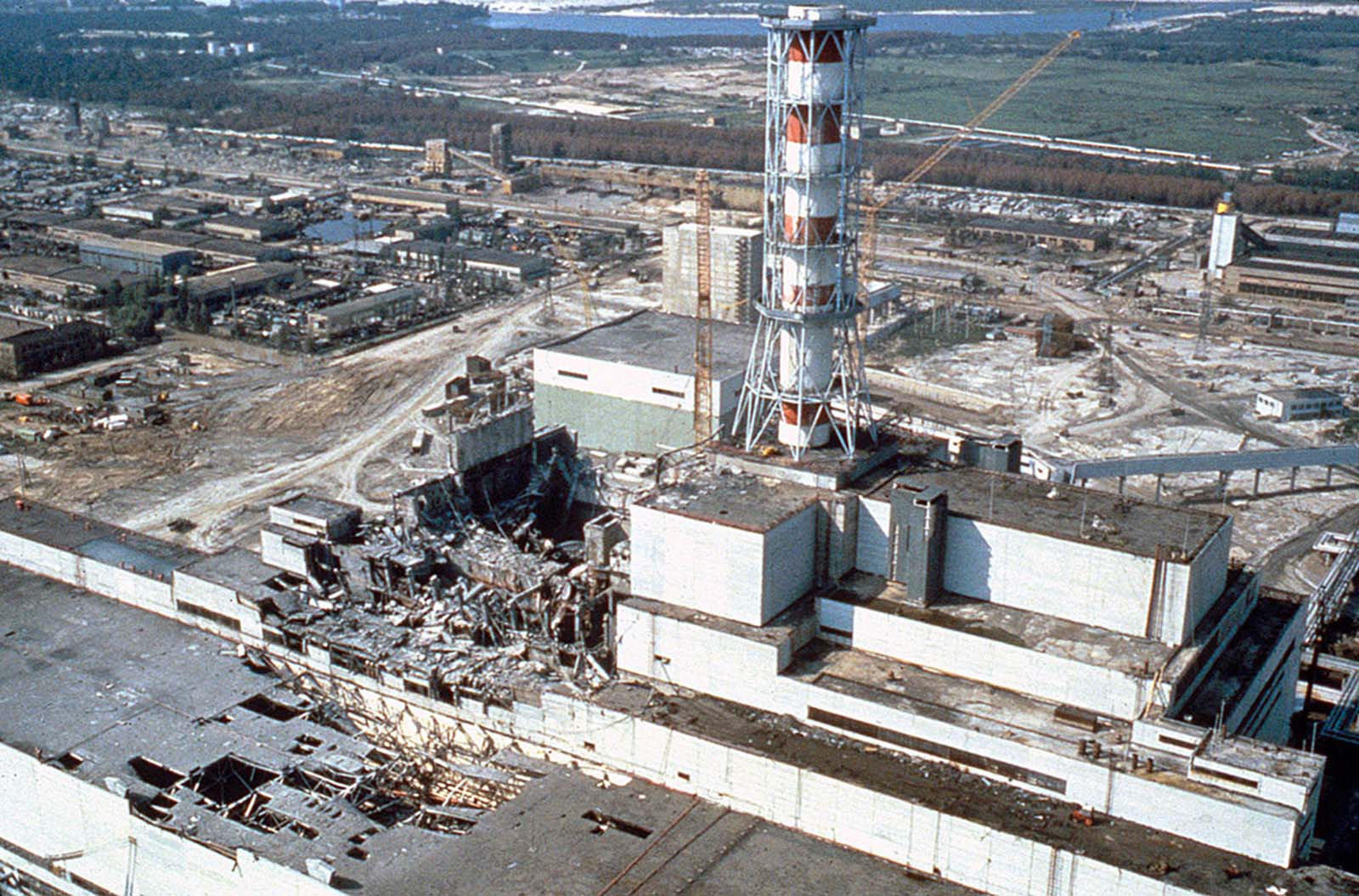 An aerial view of the damaged Chernobyl nuclear power plant, photographed a few weeks after the disaster, in May 1986. 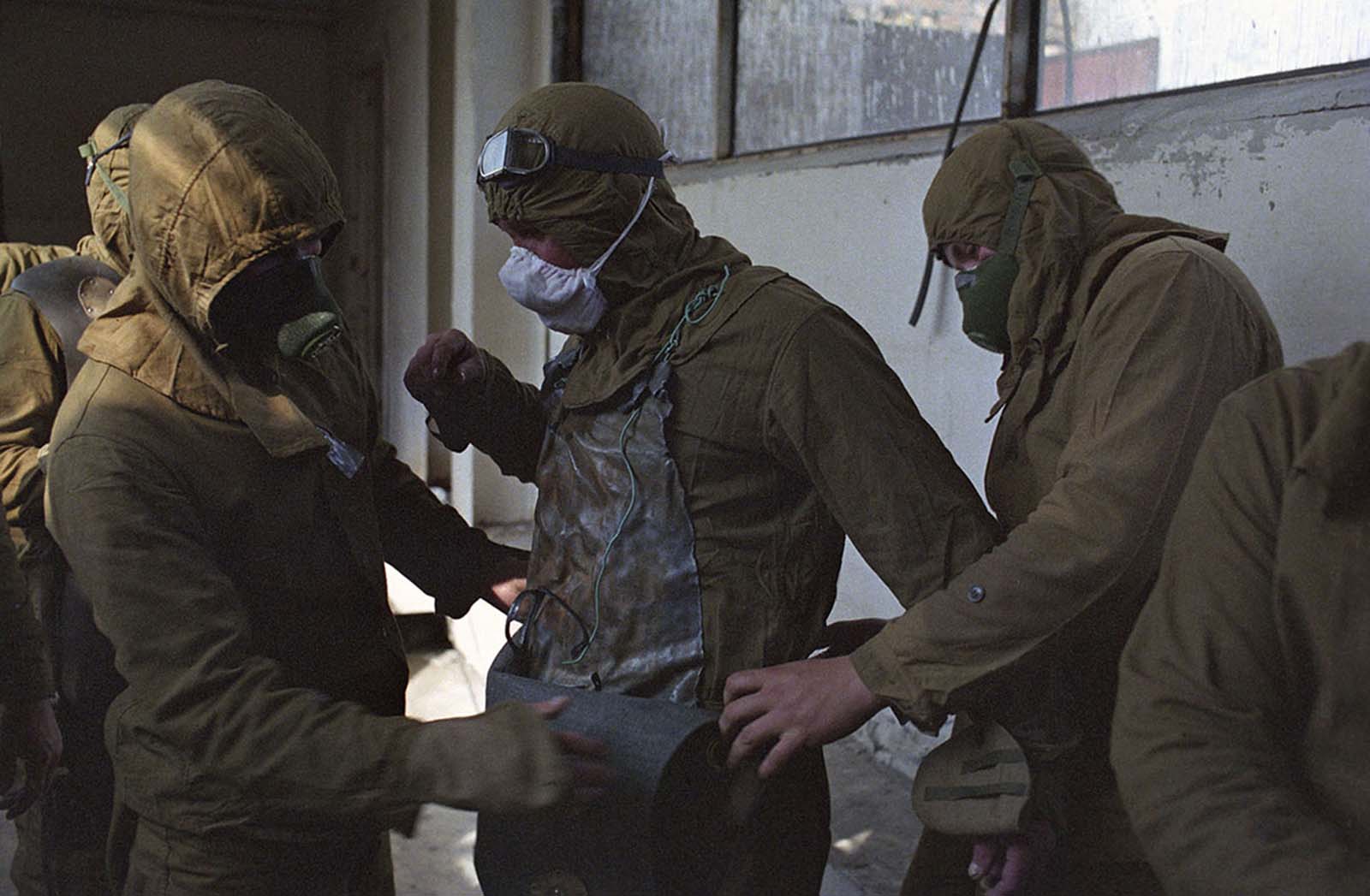 The majority of the liquidators were reservists ages 35 to 40 who were called up to assist with the cleanup operations or those currently in military service in chemical-protection units. The army did not have adequate uniforms adapted for use in radioactive conditions, so those enlisted to carry out work on the roof and in other highly toxic zones were obliged to cobble together their own clothing, made from lead sheets and measuring two to four millimeters thick. The sheets were cut to size to make aprons to be worn under cotton workwear, and were designed to cover the body in front and behind, especially to protect the spine and bone marrow. 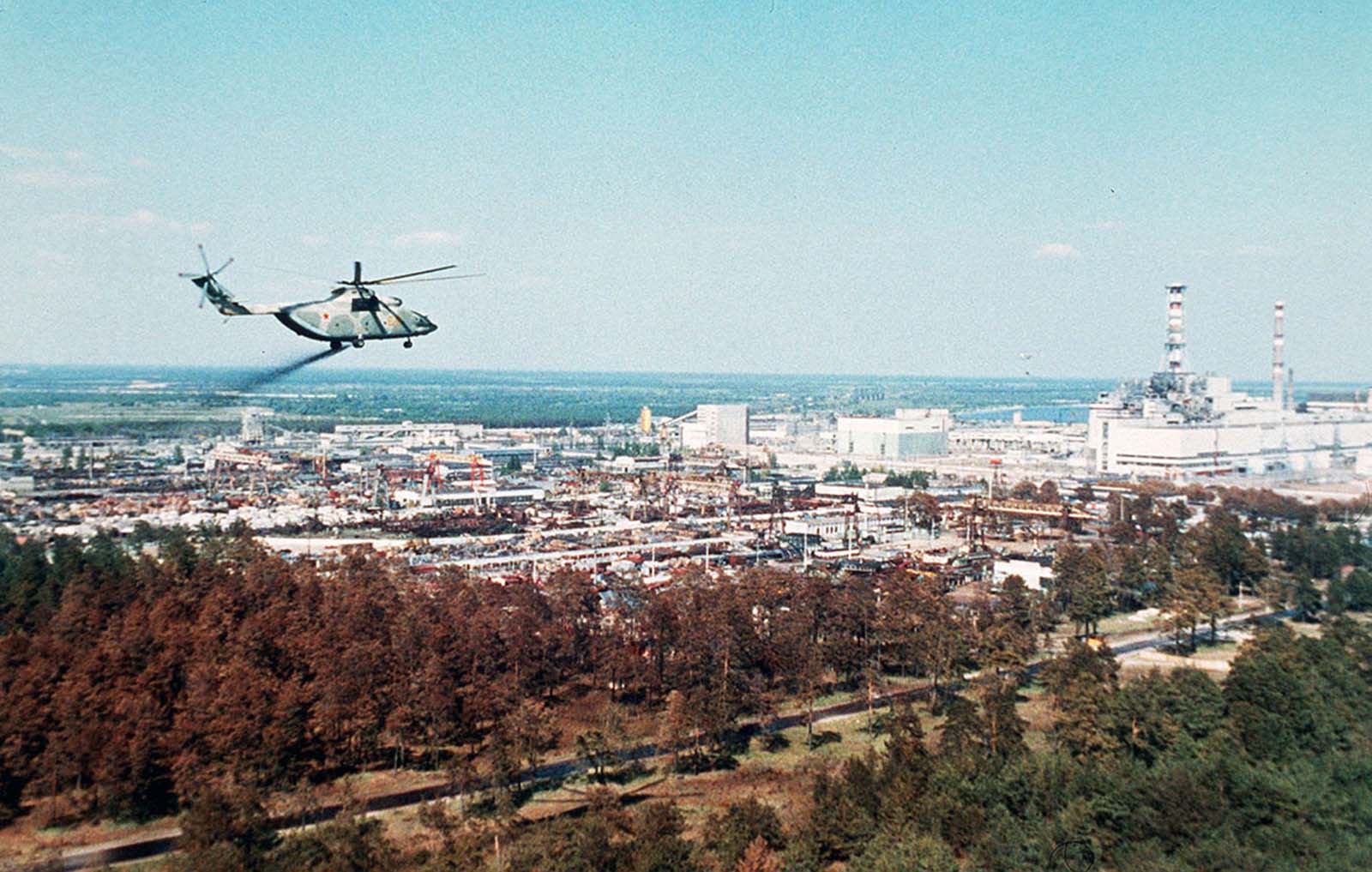 A military helicopter spreads sticky decontamination fluid supposed to reduce the spread of radioactive particles around the Chernobyl nuclear plant a few days after the disaster. 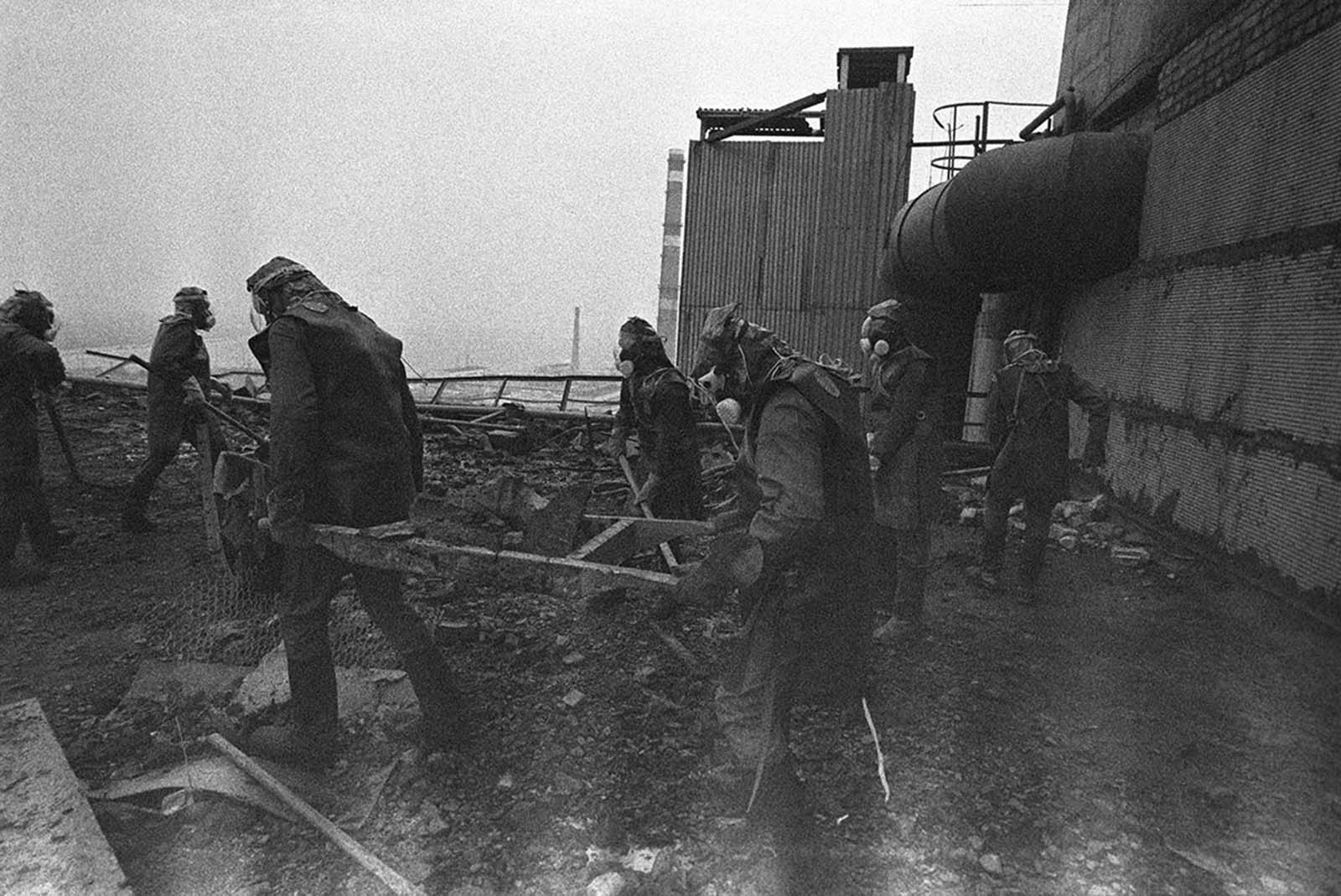 Liquidators clear radioactive debris from the roof of the No. 4 reactor, throwing it to the ground where it will later be covered by the sarcophagus. These “biological robots” have only seconds to work—time to place themselves by a pile of debris, lift a shovel load, and throw it among the ruins of reactor No. 4. 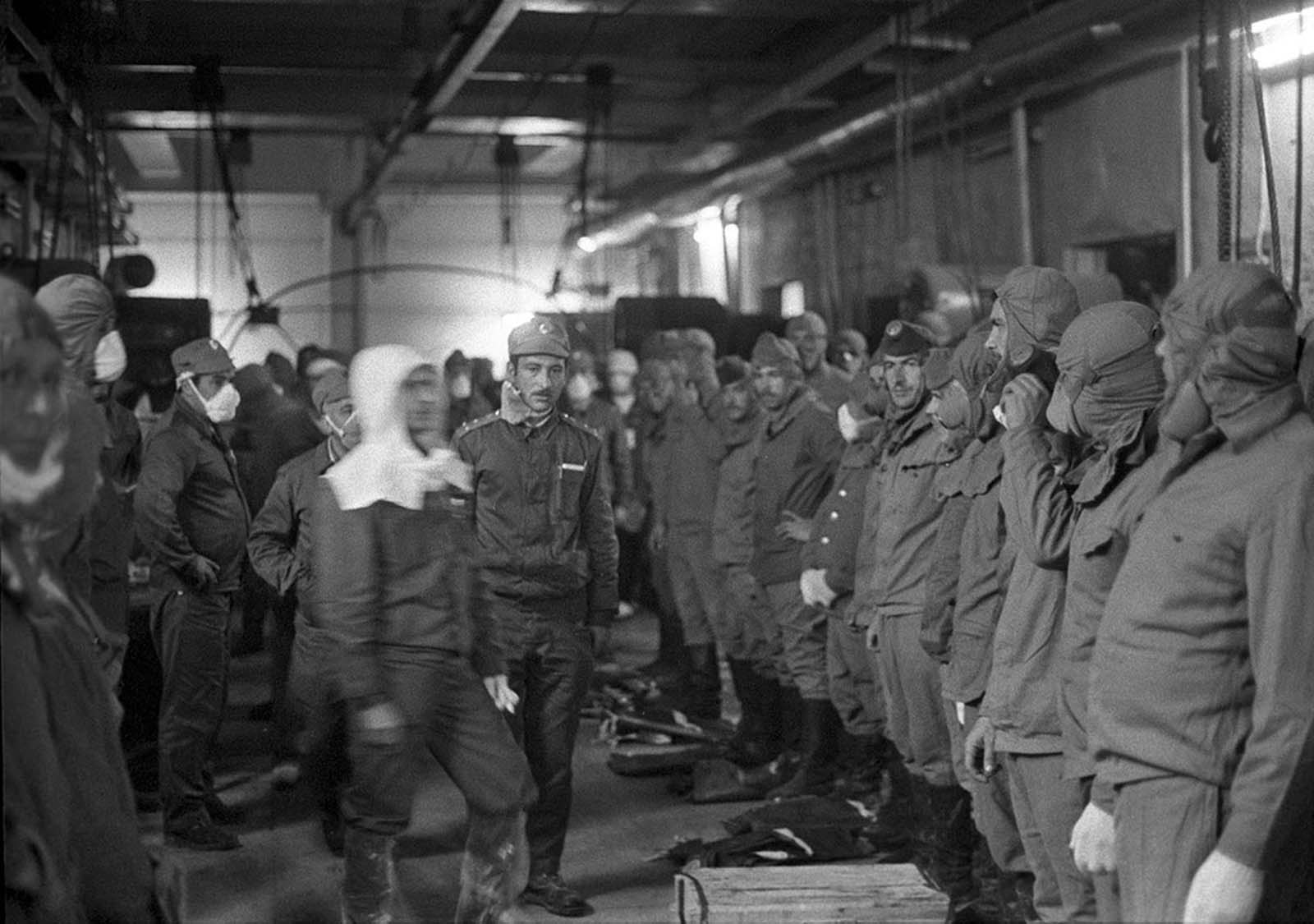 A team of human liquidators prepares to clear radioactive debris off the roof of the No. 4 reactor. 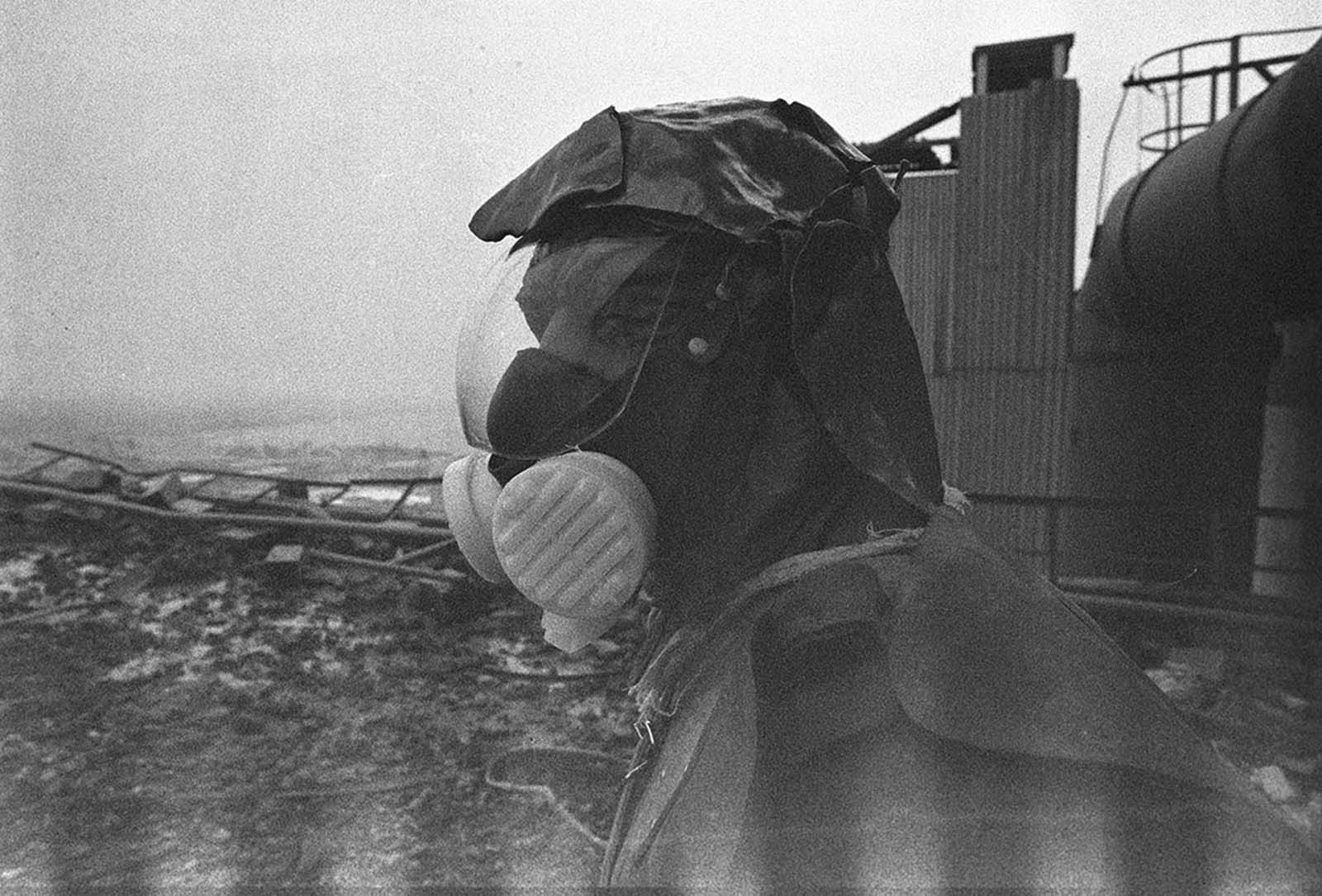 A liquidator, outfitted with handmade lead shielding on his head, works to clean the roof of reactor No. 3. 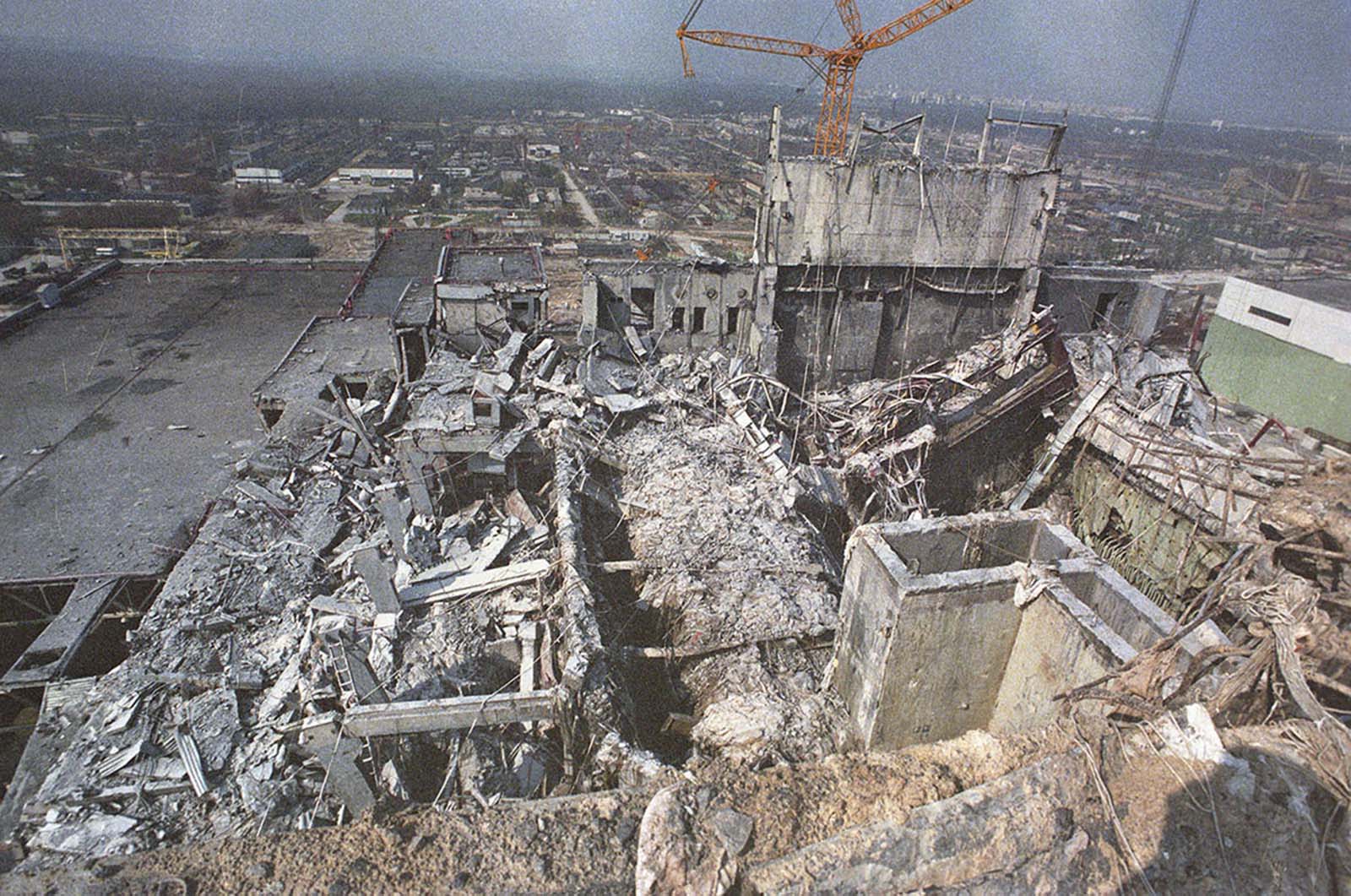 The remains of the No. 4 reactor, photographed from the roof of reactor No. 3. 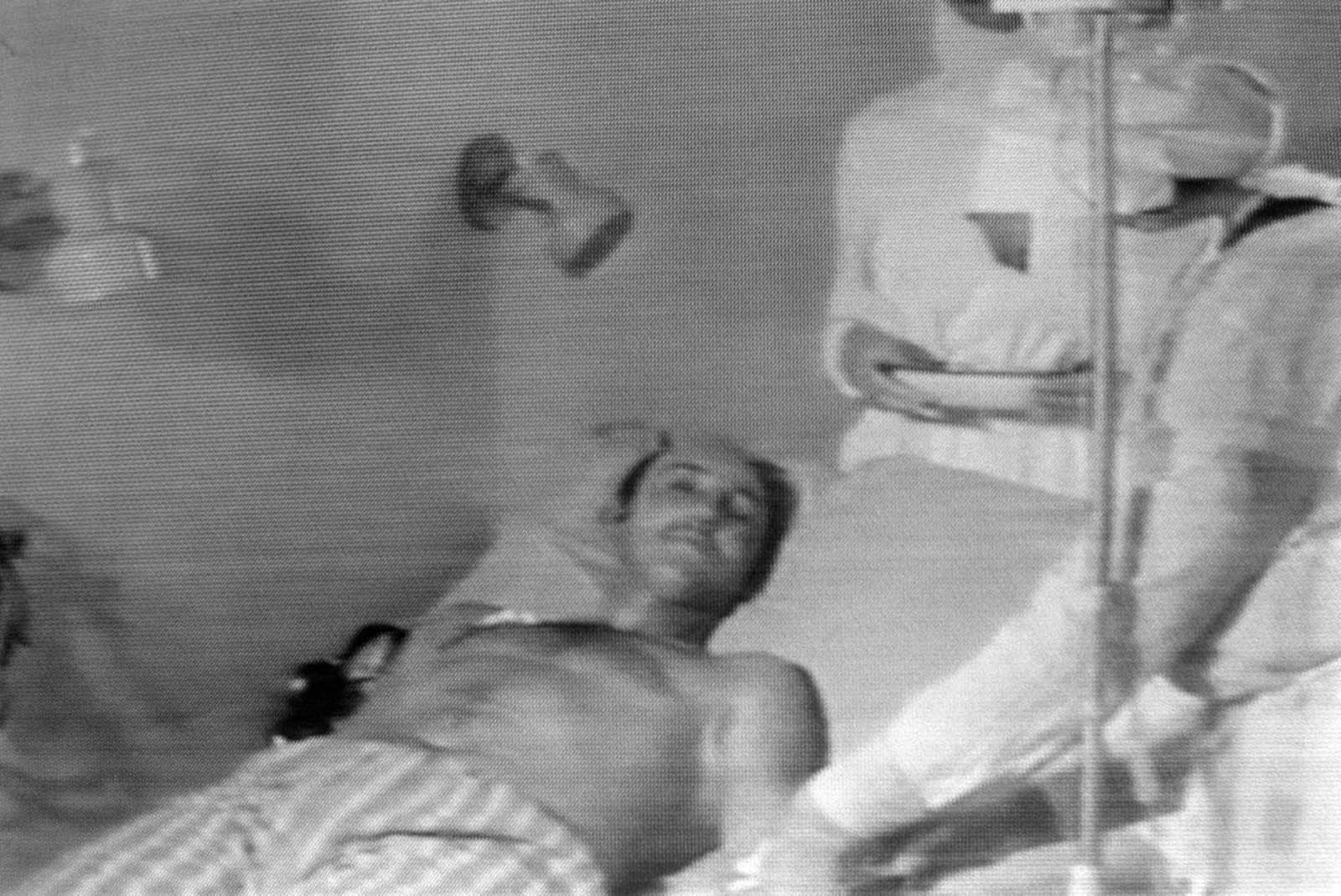 A photo from Soviet television shows a man who was injured in the blast at Chernobyl as he receives medical attention. 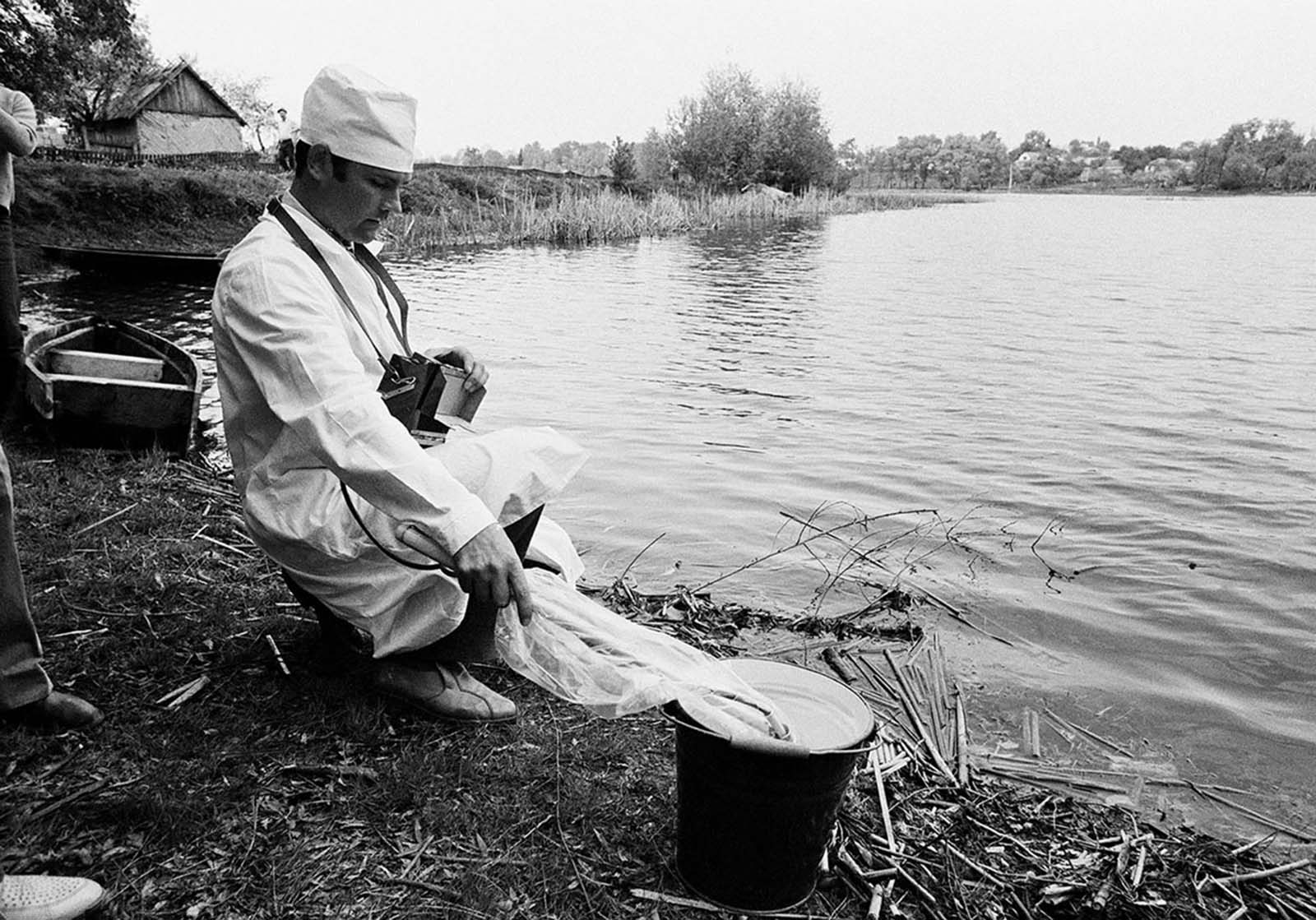 A Soviet technician checks water taken from a stream near Kiev for radiation on May 9, 1986. Checks were being performed hourly to be certain that water supplies were safe to use in the wake of the Chernobyl nuclear-plant accident. 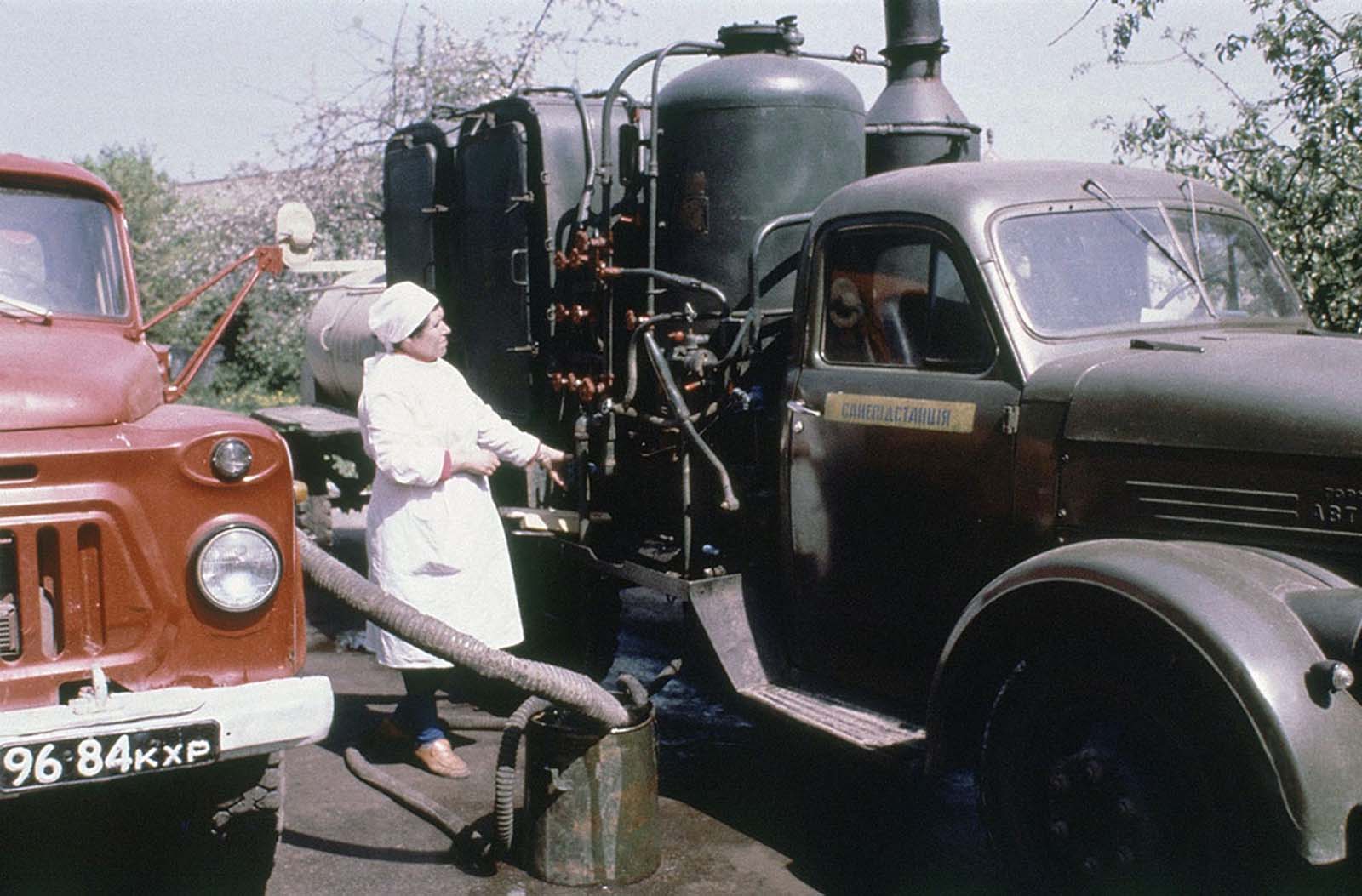 A Soviet technician prepares a tank truck with a solution designed to decontaminate people’s clothes and equipment in Kiev on May 9, 1986. 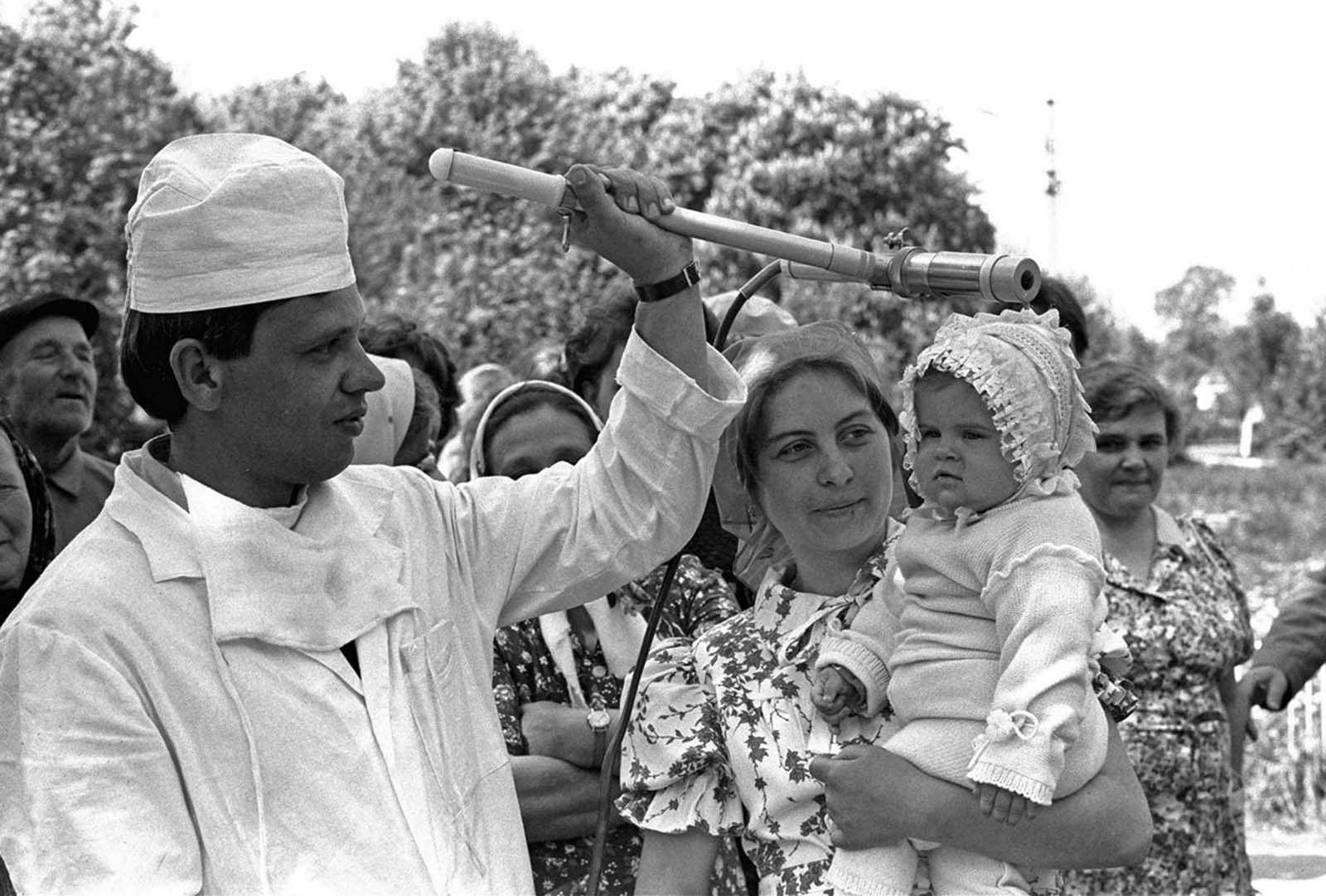 A Soviet technician checks the toddler Katya Litvinova during a radiation inspection of residents in the village of Kopylovo, near Kiev, on May 9, 1986. 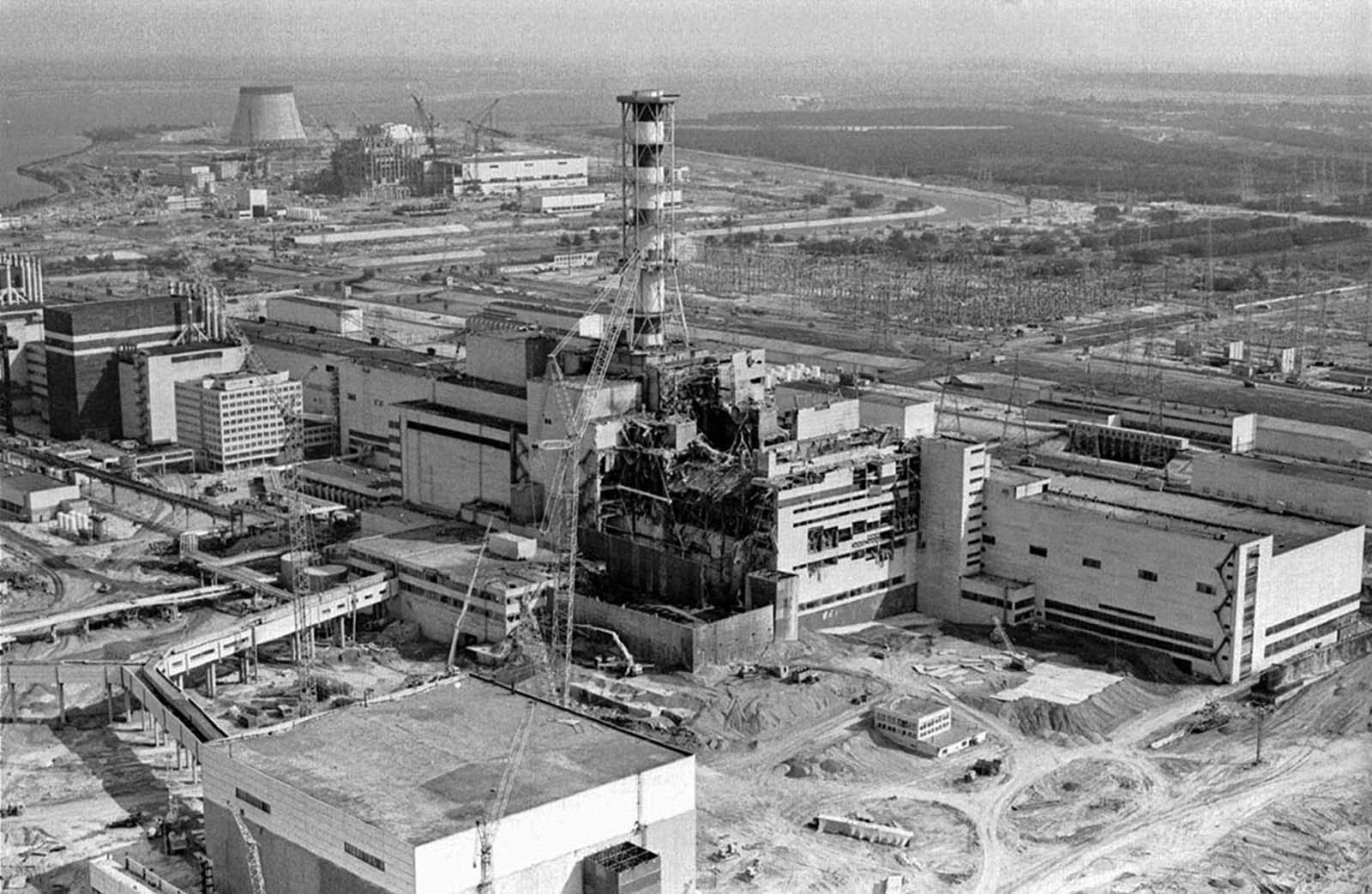 An aerial view of the damaged Chernobyl nuclear plant undergoing repair and containment work in 1986. 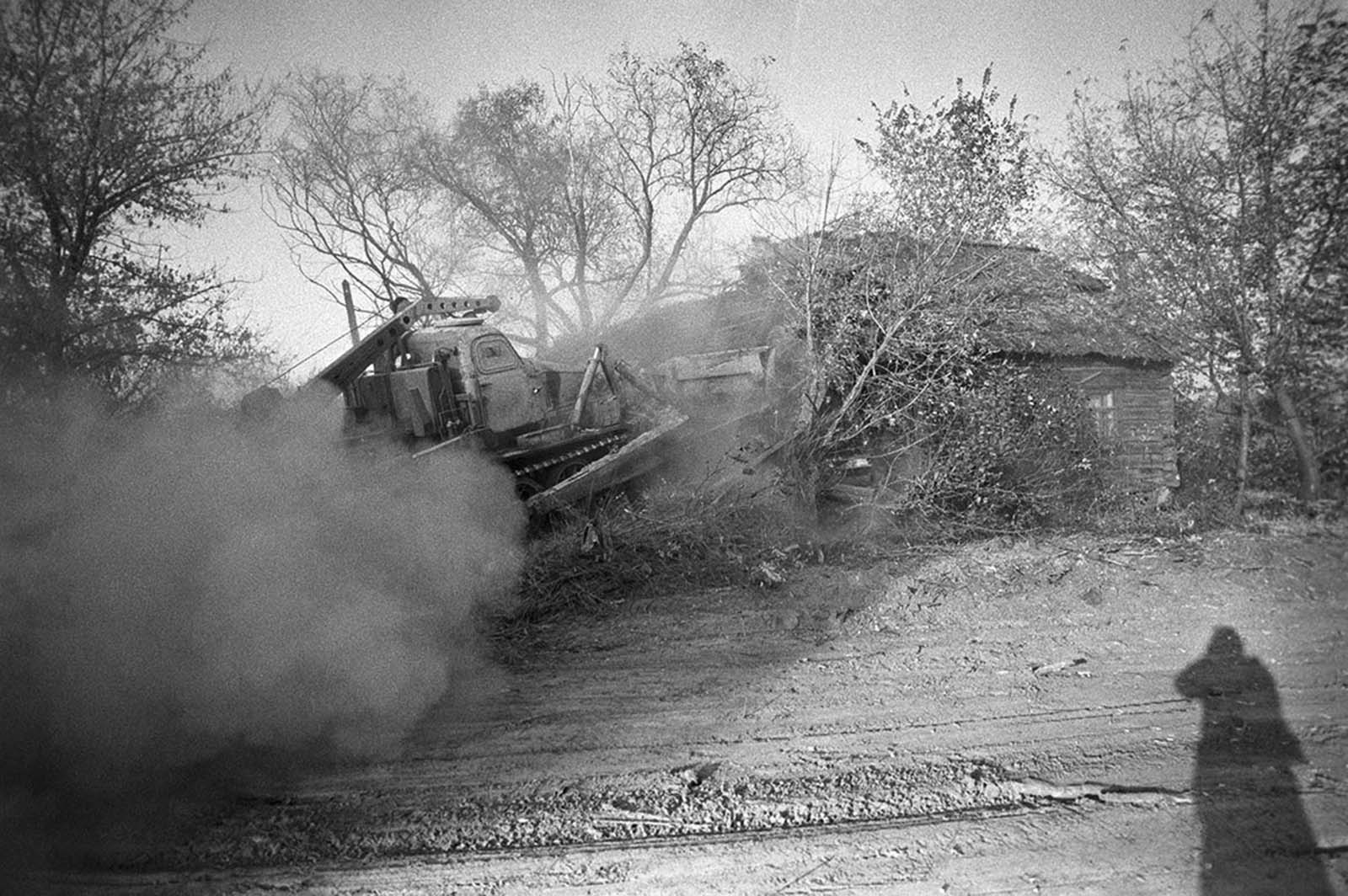 A bulldozer digs a large trench in front of a house before burying the building and covering it with earth. This method was applied to entire villages that were contaminated after the Chernobyl disaster. 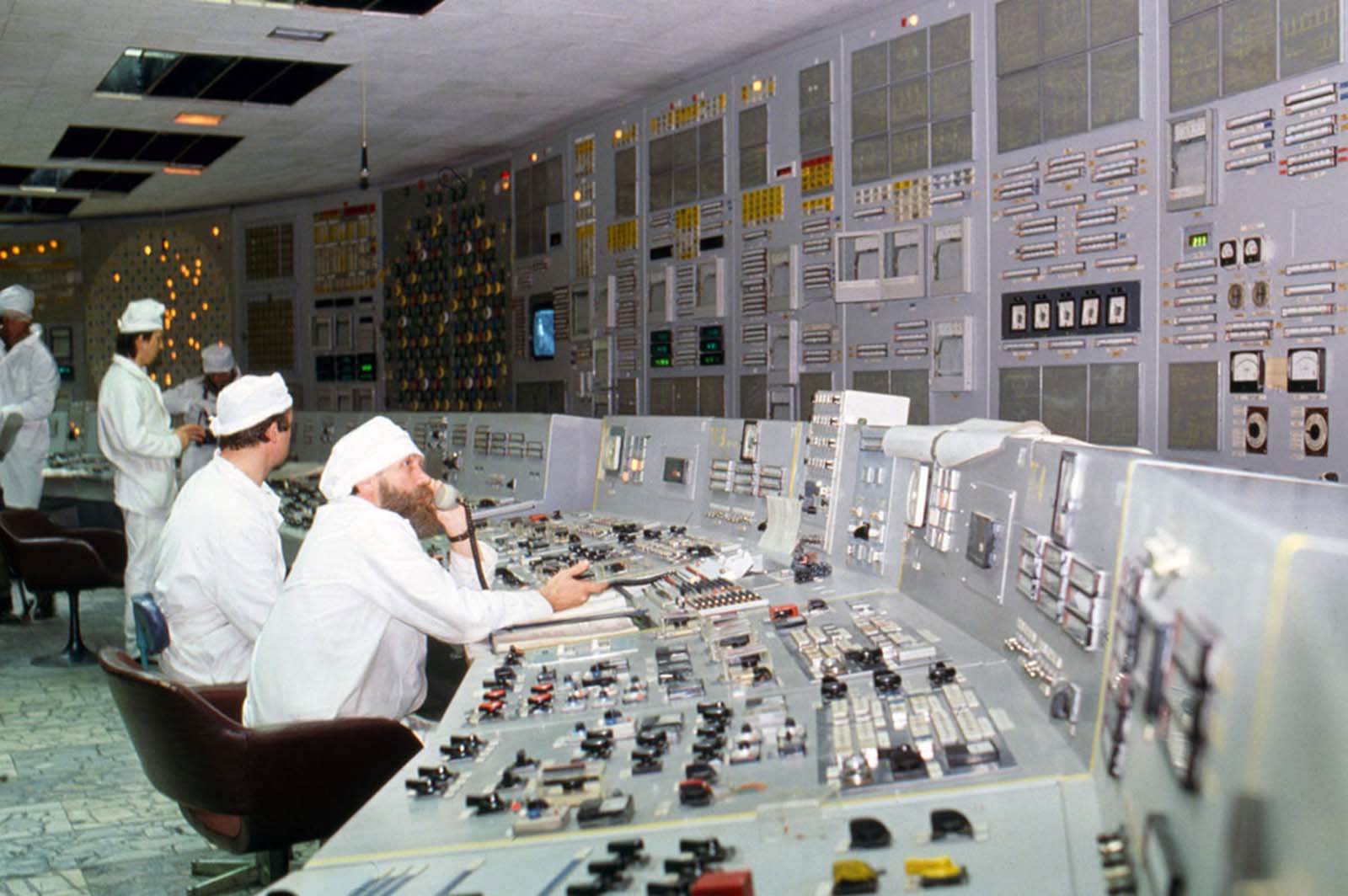 An interior photo of a still-functioning section of the Chernobyl nuclear-power plant taken a few months after the disaster in 1986. 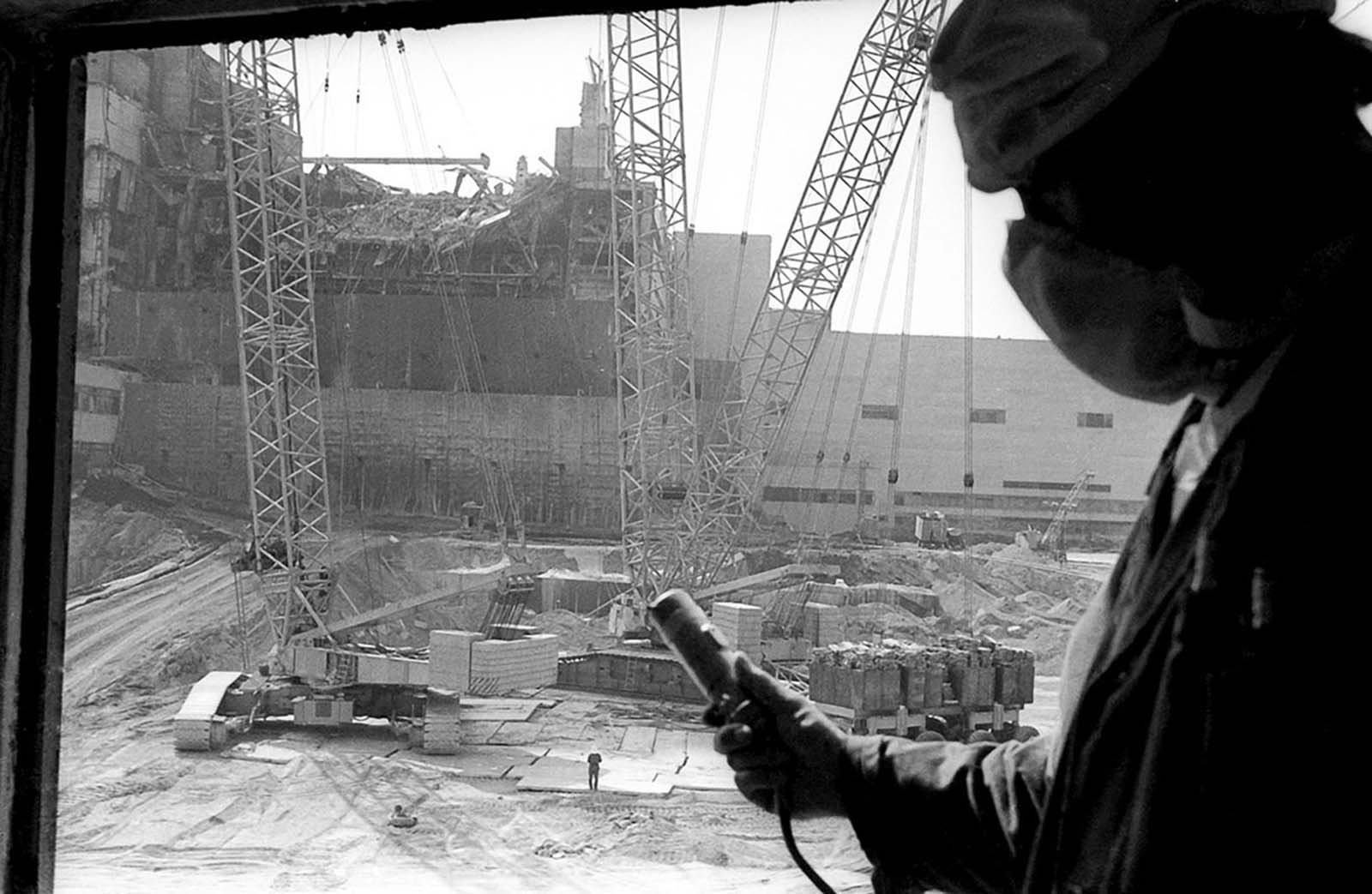 A Chernobyl nuclear-power-plant worker holds a dosimeter to measure radiation levels, with the under-construction sarcophagus, meant to contain the destroyed reactor, visible in the background, in this photo taken in 1986. 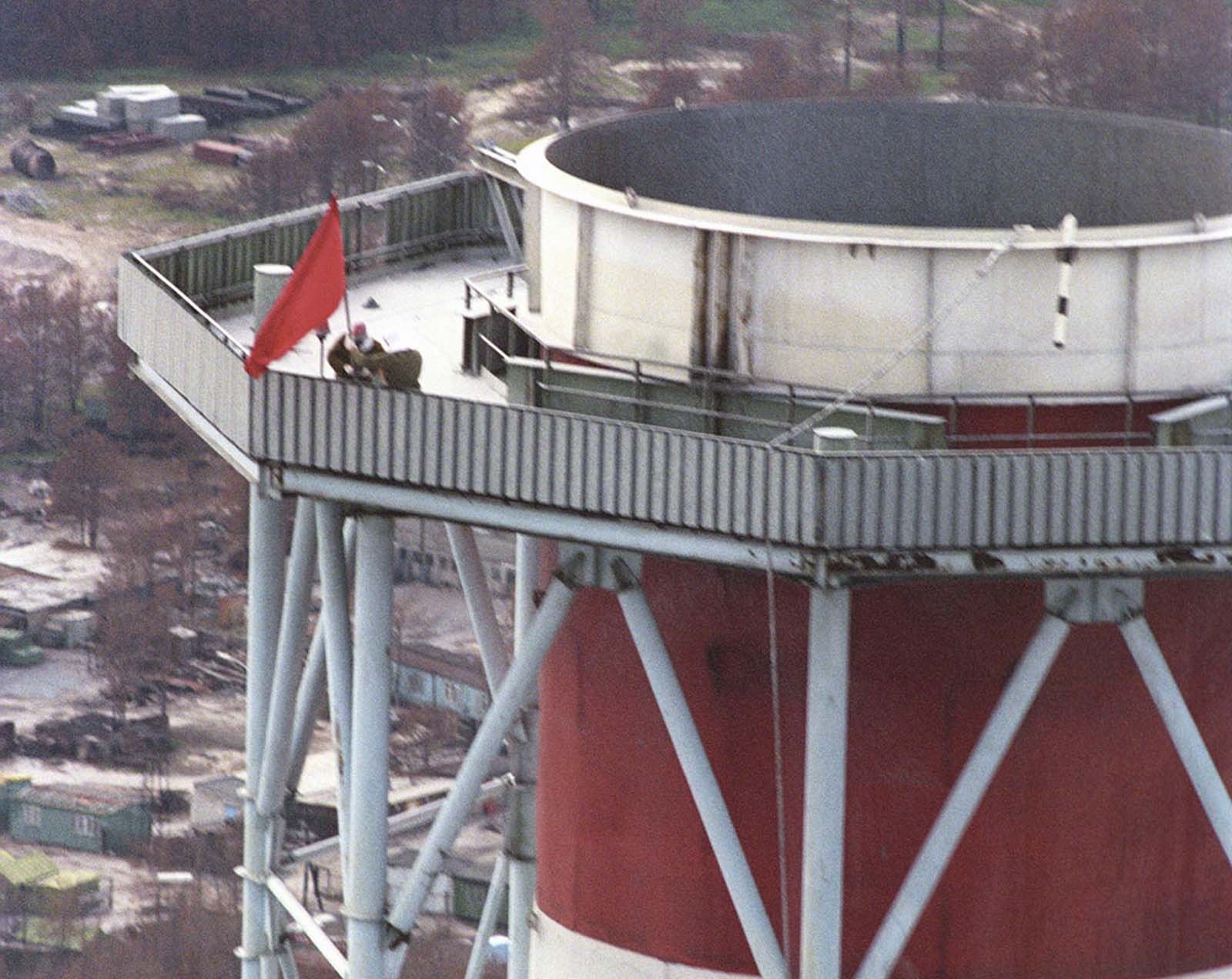 Following orders issued by Soviet authorities to mark the end of cleanup operations on the roof of the No. 3 reactor, three men were requested to post a red flag atop the chimney overlooking the destroyed reactor, reached by climbing 78 meters up a spiral staircase. The flag bearers were sent despite the dangers posed by heavy radiation, and after a group of liquidators had already made two failed attempts by helicopter. The radiation expert Alexander Yourtchenko carried the pole, followed by Valéri Starodoumov with the flag, and Lieutenant Colonel Alexander Sotnikov with the radio. The whole operation was timed to last only 9 minutes, given the high radiation levels. At the end, the trio were rewarded with a bottle of Pepsi (a luxury in 1986) and a day off. 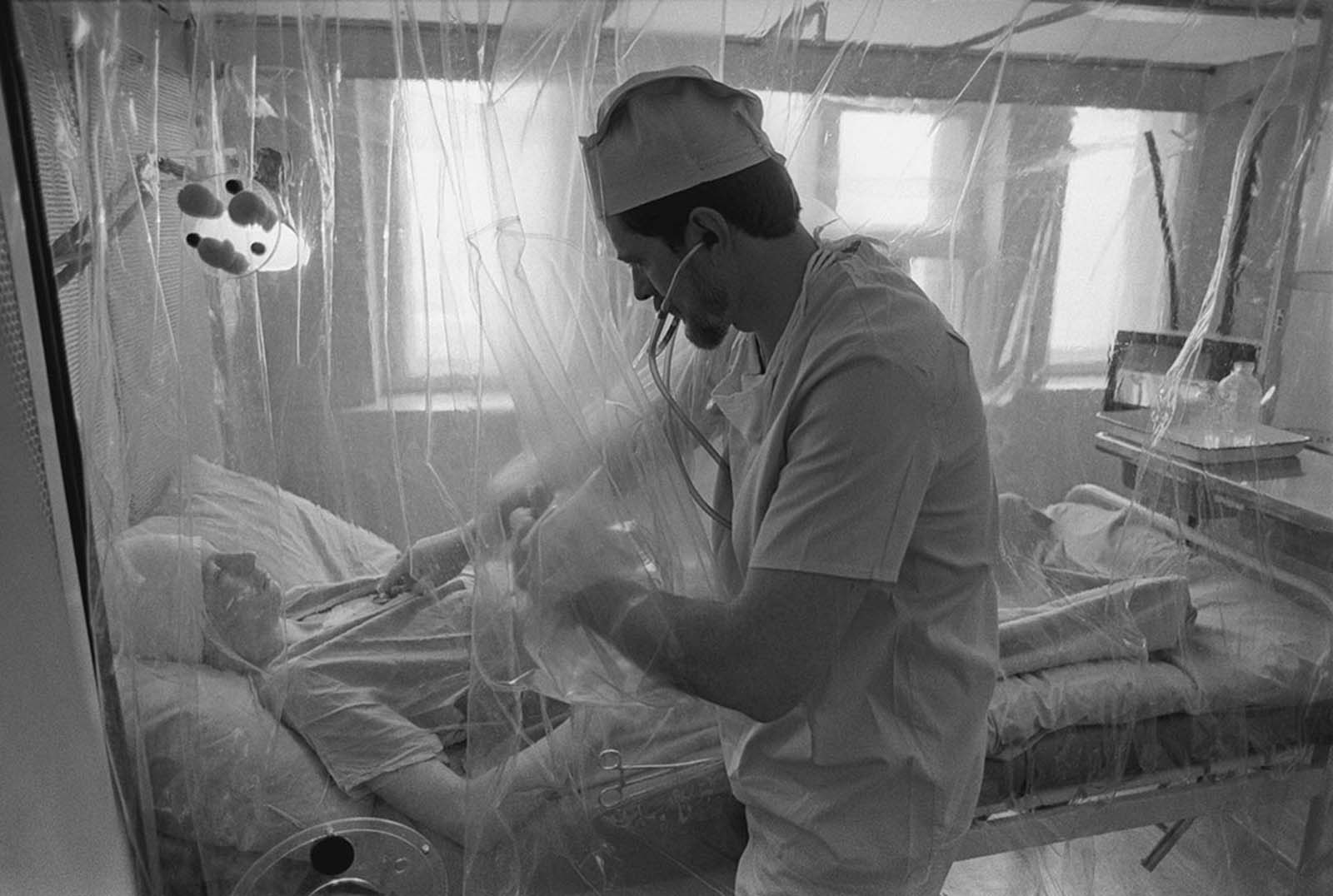 At Moscow’s No. 6 clinic, which specializes in radiation treatment, a patient recovers after a bone-marrow operation. A doctor examines the patient in a sterile room. The examination is carried out in an individual, air-conditioned chamber via specially created openings to avoid direct contact and contamination.