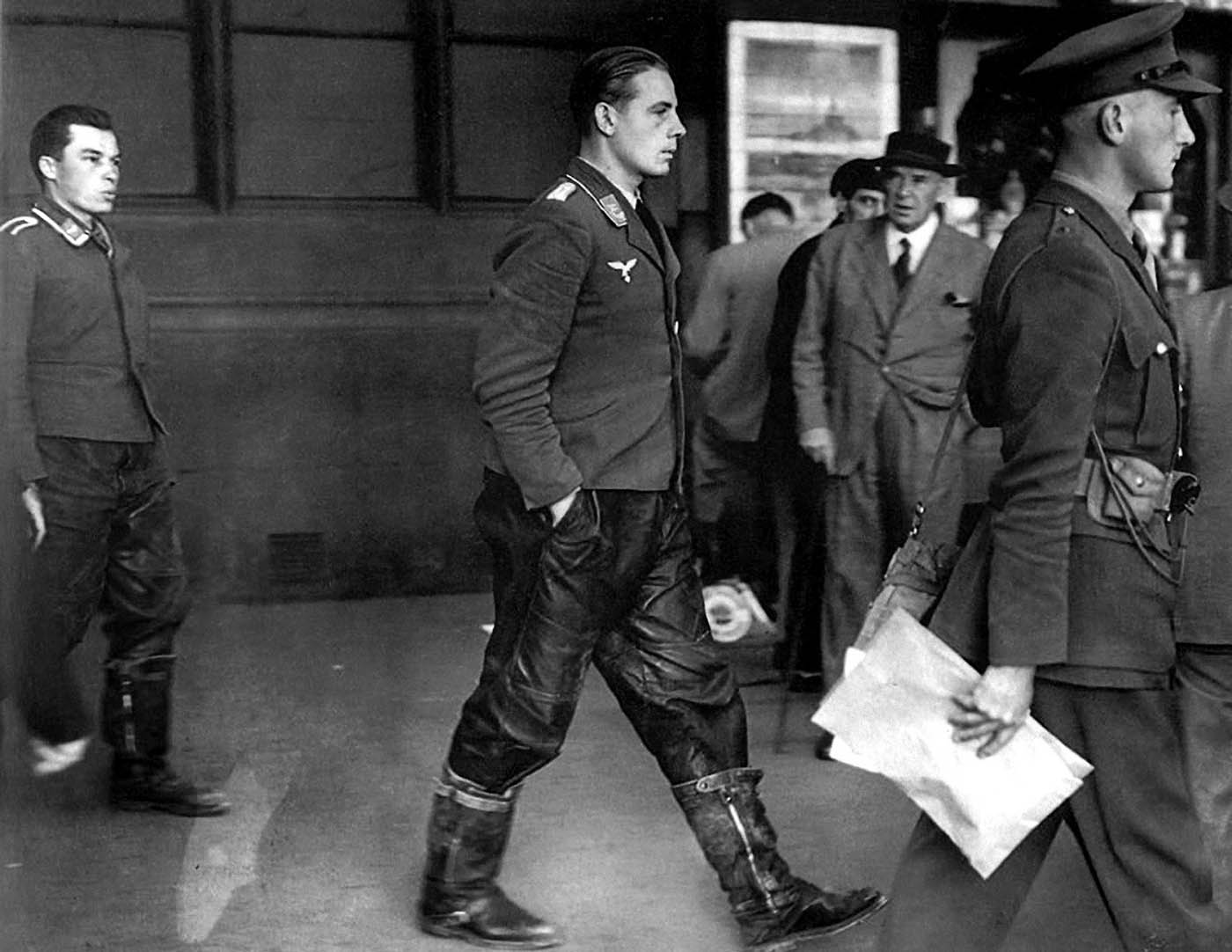 Under British military escort, two German Luftwaffe crewmen, an Unteroffizier (Subordinate Officer, or Corporal) and an Oberleutnant (the highest-ranking Lieutenant Officer) who bailed out over the English countryside and were taken as POWs during a bombing raid emerge from the London Underground onto the city streets as shocked Londoners look on.

The unorthodox travel arrangements for the two prisoners of war on public transportation probably served as a good propagandistic photographic opportunity, as the image would be widely disseminated and seen by a nation beleaguered by constant aerial assaults during the Blitz.

According to Article 42 of the Geneva Conventions, it was explicitly forbidden to attack pilots who had bailed out of their aircraft, as well as surrendering pilots on the ground. Downed pilots on both sides were treated fairly well.

The Luftwaffe tended to treat their POWs very well because they knew that the Allies had many of their men held as prisoners, so any word of poor treatment was likely to be responded with similar actions on the other side.

At the beginning of World War II, there was a strong sense of chivalry between the British RAF and German Luftwaffe pilots; they liked to regard themselves as “knights of the air” and shooting defenseless enemy pilots in their parachutes would be contrary to their pilots’ professionalism.

The question of shooting an enemy pilot parachuting over his own territory aroused bitter debate from both sides. On August 31, 1940, during the Battle of Britain, RAF Air Chief Marshal Hugh Dowding dined with Prime Minister Winston Churchill at Chequers.

After dinner, they discussed the topic of the morality of shooting parachuting Luftwaffe pilots. Dowding suggested that German pilots were perfectly entitled to shoot RAF pilots parachuting over Britain as they were still potential combatants (i.e., going back to a new aircraft to conduct another military mission) while RAF pilots should refrain from firing at German pilots as they were out of combat and would eventually become prisoners of war once they landed on British soil. Churchill was appalled by this suggestion, arguing that shooting a parachuting pilot “was like drowning a sailor”.

On the German side, Luftwaffe commander-in-chief Hermann Göring asked Luftwaffe fighter ace Adolf Galland about what he thought about shooting enemy pilots while in their parachutes, even over their own territory.

Galland replied that “I should regard it as murder, Herr Reichsmarschall. I should do everything in my power to disobey such an order”. Goering—who had been a fighter ace himself during World War I—said, “That is just the reply I had expected from you, Galland”.