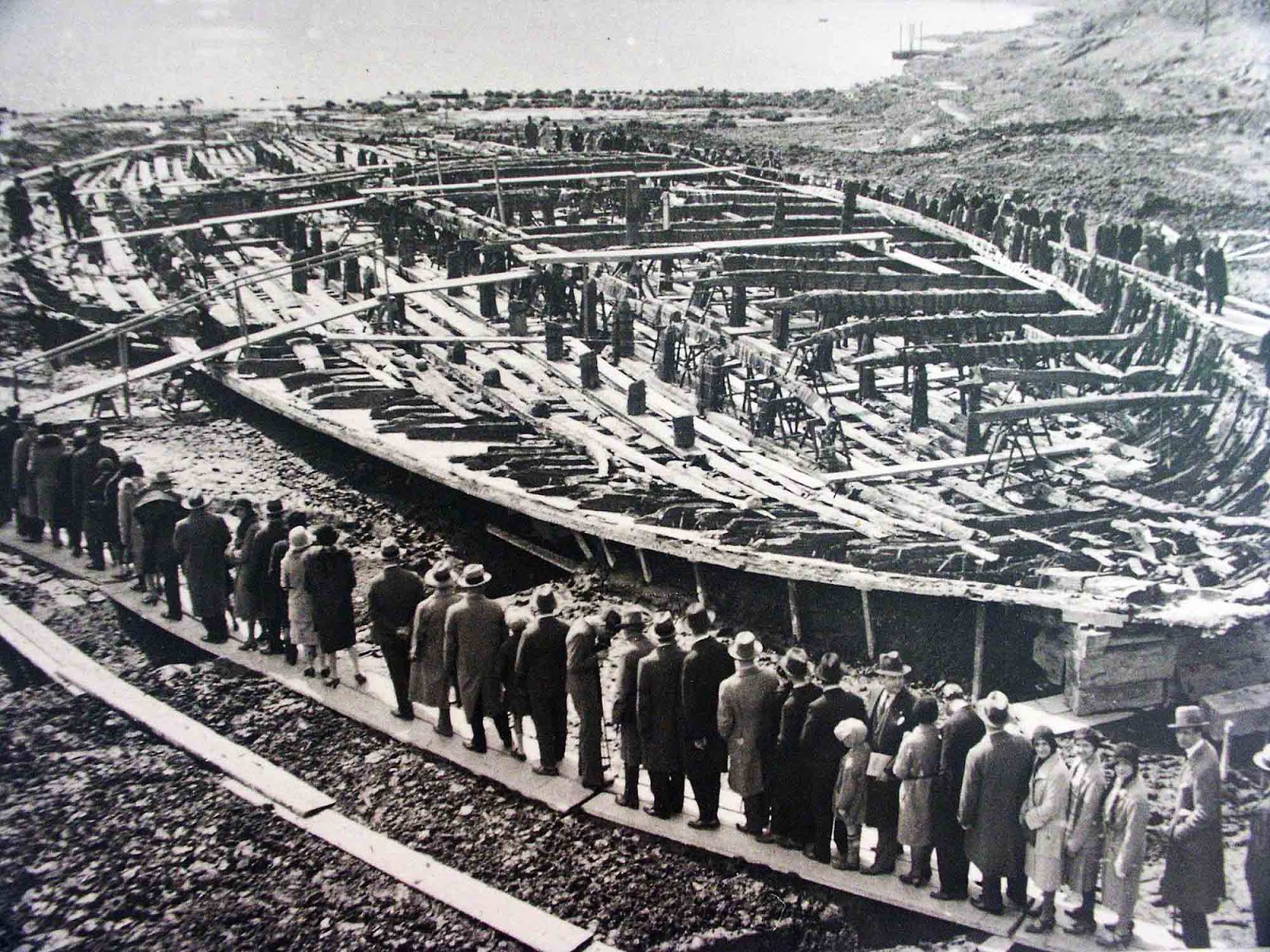 After nearly 1,900 years at the bottom of Lake Nemi, the ships became visible again.

Between 1928 and 1932, two enormous wooden ships, which once belonged to Emperor Caligula, and had lain on the bottom of the Lake Nemi for over nineteen hundred years, were salvaged in what was perhaps the greatest underwater archaeological recovery ever accomplished.

The larger ship was essentially an elaborate floating palace, which contained quantities of marble, mosaic floors, heating, and plumbing such as baths among its amenities. Both ships featured technology long thought to be recent inventions.

One of the most fascinating aspects of the whole affair was the fact that knowledge of the two huge vessels being in the lake had never been lost throughout the ages, from the reign of Caligula to the twentieth century. There were several attempts at salvage carried out at various times, most of which resulted in the degradation of the wrecks and plundering of artifacts.

Throughout history, various deities have been venerated there. The area is principally associated with the goddess Diana and the lake was known in antiquity as the Speculum Dianae or “The Mirror Of Diana”.

There is considerable speculation regarding why the emperor Caligula chose to build two large ships on such a small lake. From the size of the ships it was long held that they were pleasure barges, though, as the lake was sacred, no ship could sail on it under Roman law implying a religious exemption. 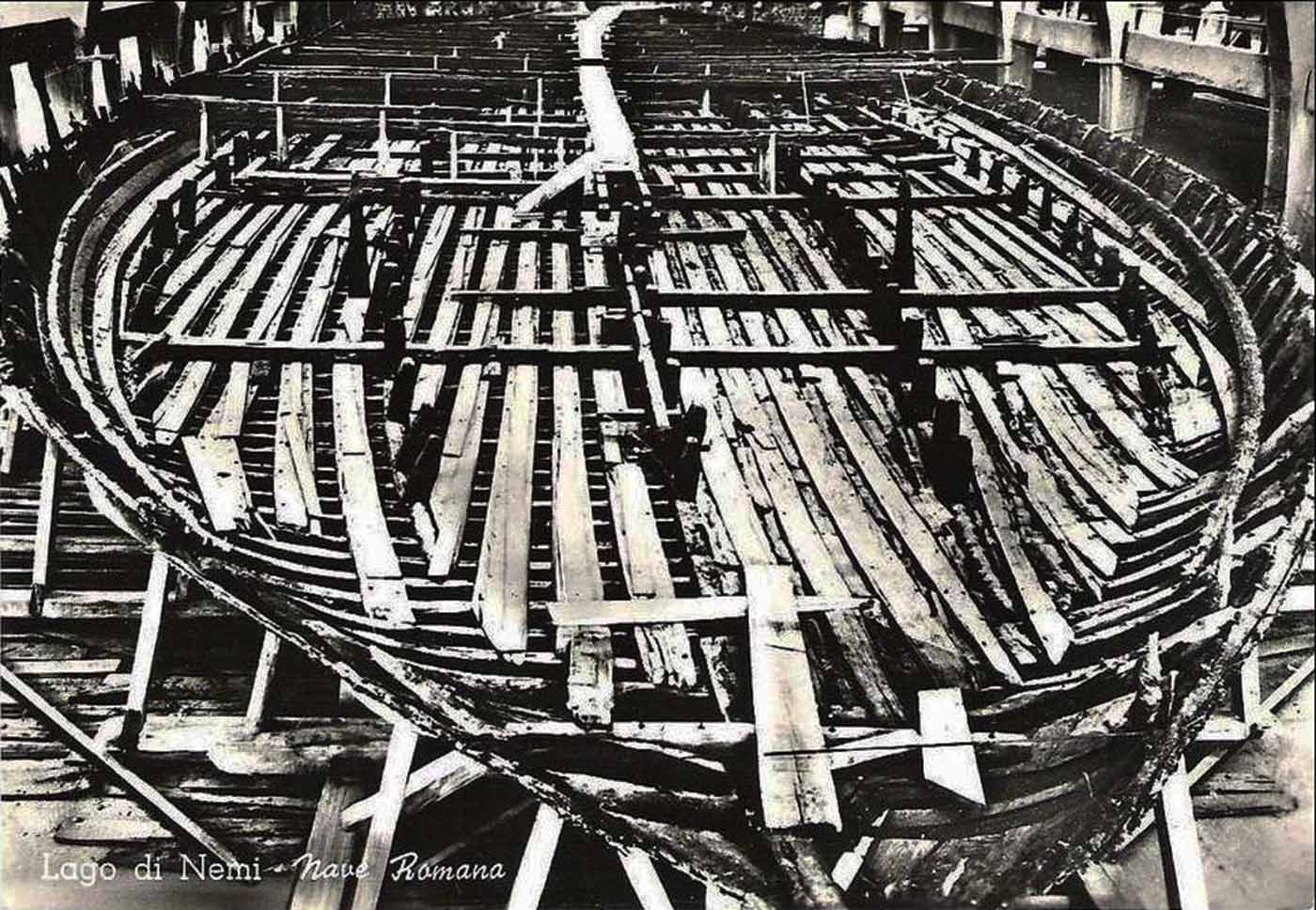 Local fishermen had always been aware of the existence of the wrecks, and had explored them and removed small artifacts, often using grappling hooks to pull up pieces, which they sold to tourists.

As one of his royal passions, Emperor Caligula ordered several large barges to be built to use on Lake Nemi. The two vessels, which were designated in modern times as Prima Nave and Seconda Nave, (First Ship and Second Ship), had dimensions of 70m x 20m (230ft x 66ft) and 73m x 24m (240ft x 79ft) respectively.

While there can be little doubt that the ships were built at the capricious whim of a spendthrift despot, their intended purpose and eventual use have long been the subject of debate by scholars and historians. Some contend that Caligula built the barges to show the rulers of Syracuse, Sicily, and the Ptolemaic rulers in Egypt that Rome could match any luxurious pleasure barges that they built.

Other scholars argue that Caligula designed one of his ships as a floating temple to Diana and some say that the other ship may have been used as a floating palace where Caligula and his court could indulge in the depravities that history has credited to him.

Seutonius, the Roman historian described the two biggest barges as being built of cedar wood adorned with jeweled prows, rich sculpture, vessels of gold and silver, sails of purple silk, and bathrooms of alabaster and bronze. The floors were paved with glass mosaic, the windows and door frames were made of bronze, and many of the decorations were priceless.

The Romans made ball bearings out of the lead and they probably used the ball bearings on the Nemi ships to make the statues of the gods rotate or to move the windlasses. The flat-bottomed Nemi barges were not self-propelled. 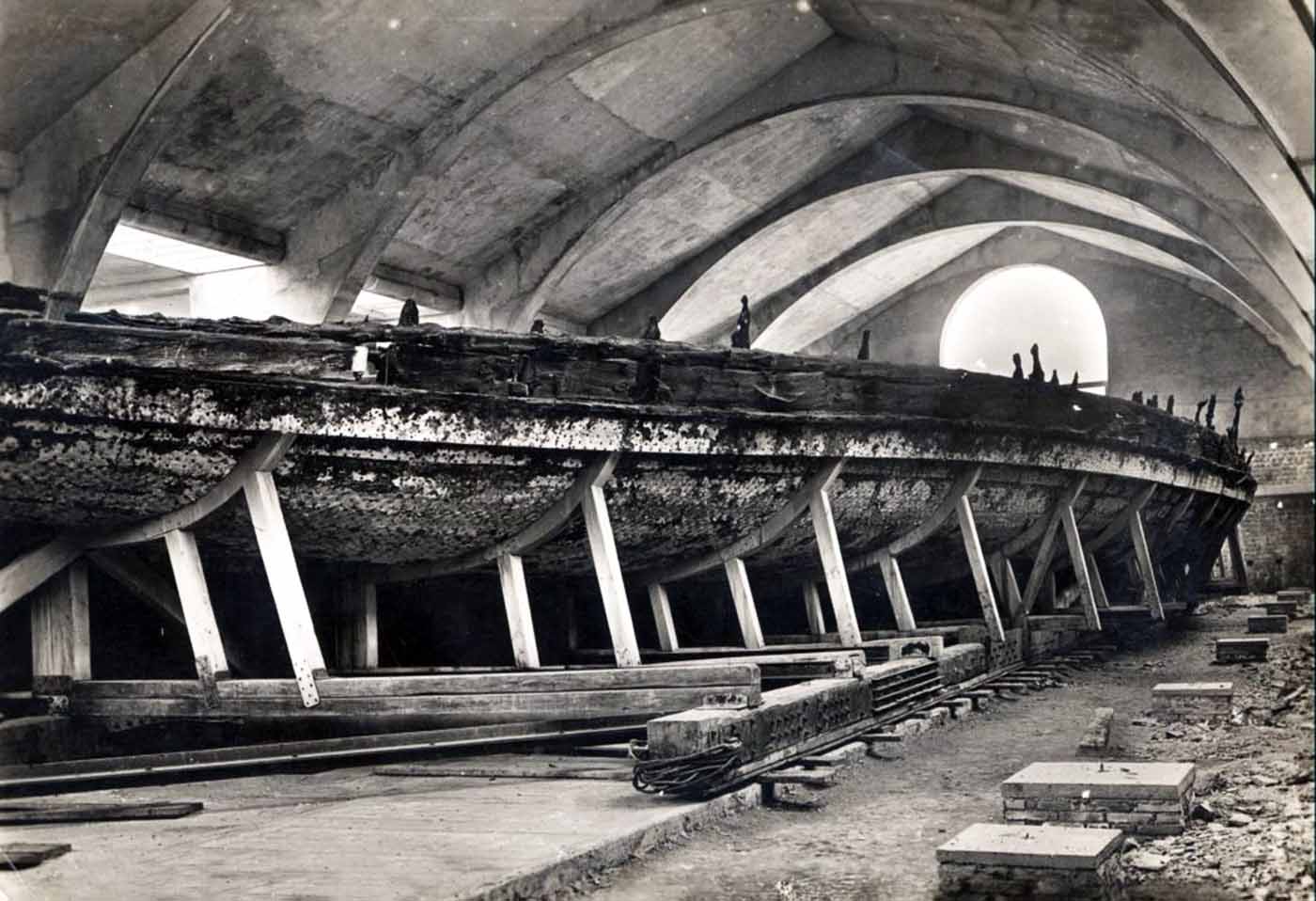 Some contend that Caligula built the barges to show the rulers of Syracuse, Sicily, and the Ptolemaic rulers in Egypt that Rome could match any luxurious pleasure barges that they built. 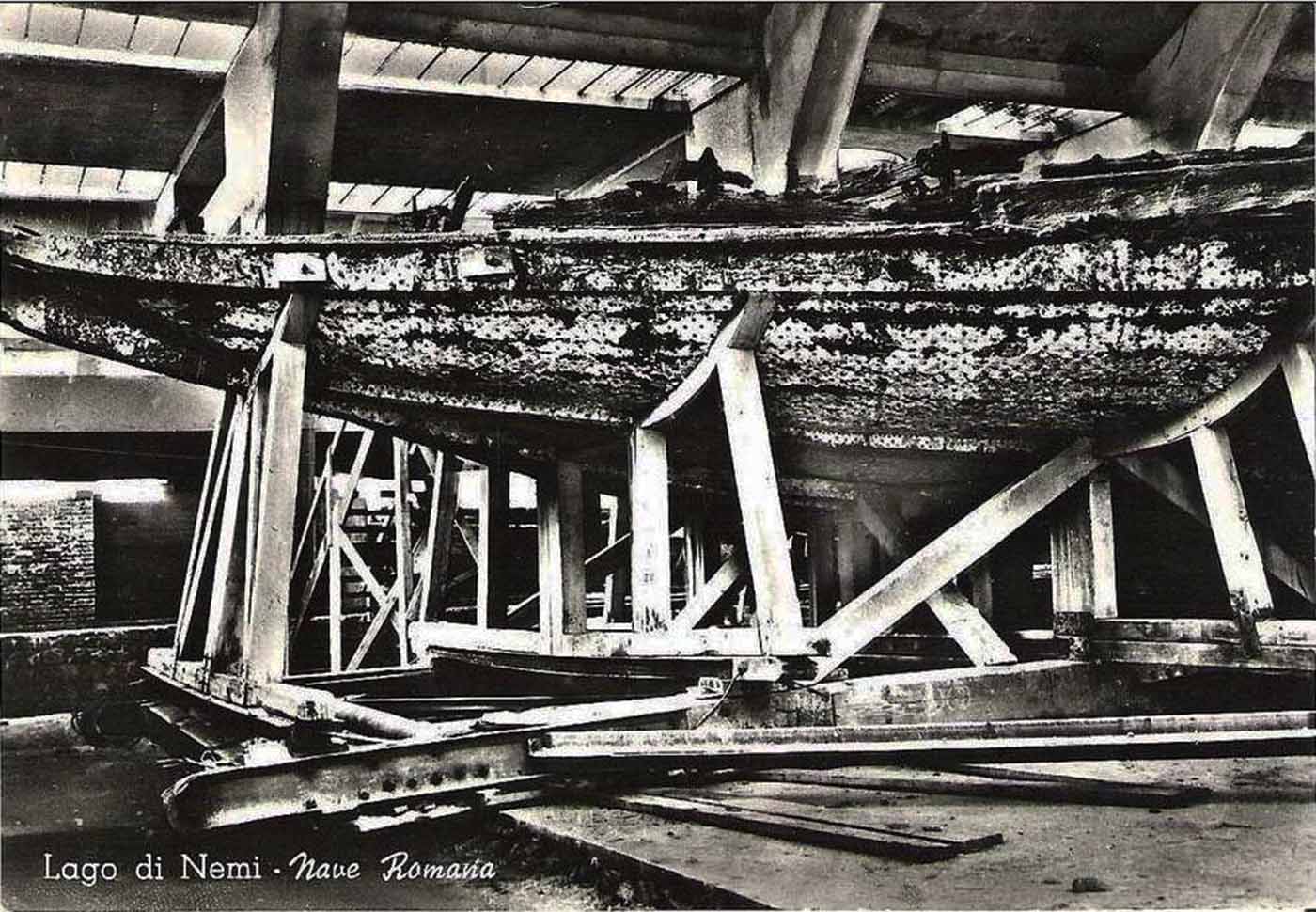 The two vessels, which were designated in modern times as Prima Nave and Seconda Nave, (First Ship and Second Ship), had dimensions of 67m x 19m and 71m x 24m respectively.

Local fishermen had always been aware of the existence of the wrecks, and had explored them and removed small artifacts, often using grappling hooks to pull up pieces, which they sold to tourists.

In 1446, Cardinal Prospero Colonna and Leon Battista Alberti followed up on the stories regarding the remains and discovered them lying at a depth of 18.3 meters (60ft), which at that time was too deep for effective salvage. They caused significant damage to the ships by using ropes with hooks to tear planks from them.

The local people and archaeologists knew of an ancient Roman underground tunnel that connected the lake to farms outside the crater and they connected it to a floating pumping platform. Using powerful pumps and water scooping machines, the workers lowered the level of the lake and by June 10, 1931, they had recovered the first ship and the second had been exposed.

By this time the water level had dropped more than 20 meters (66ft) with over 40 million cubic meters of water removed. A London Times story reported that everyone on the site cheered as the waters receded to reveal the first Nemi ship. After nearly 1,900 years at the bottom of Lake Nemi, the ships again rode the waves.

The devastation caused by previous attempts at lifting was all too apparent from the time the ship became visible. Practically all of the original upper-works had been torn off and what remained lay in a jumble inside the hull with a multitude of other artifacts. 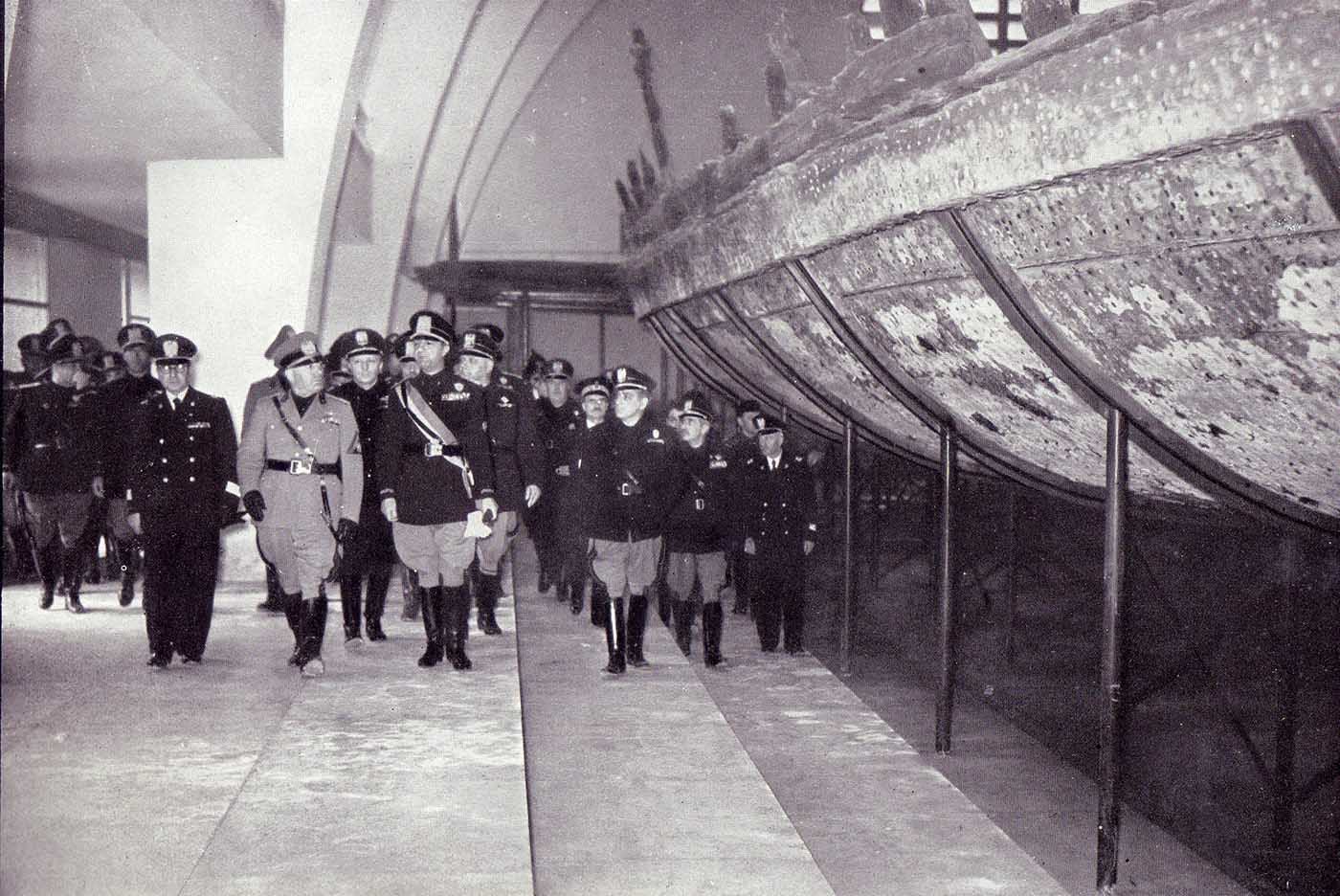 The ships were destroyed by fire in World War II on the night of May 31, 1944. Several US army shells hit the Lake Nemi Museum around 8 pm, causing little damage but forcing the German artillery to leave the area. Then a few hours later, smoke arose from the Museum and soon the two ships were burnt to ashes although the museum’s concrete structure suffered little damage.

The Lake Nemi Museum was restored and reopened in 1953. Photographs, drawings from the Italian Navy survey, and drawings of archaeologist G. Gatti also survived the fire, allowing artists and architects to make reconstructions of the two ships.

The spaces that once held the two immense Nemi Ships are now filled by one-fifth scale models built in the naval dockyard near Naples, and bronzes and other artifacts that survived the fire. Outside the Lake Nemi Museum, a life-size reconstruction of the sailing ship’s hull is displayed.

By 1827, interest had revived to recover Caligula’s ships. Annesio Fusconi built a floating platform from which to raise the wrecks however, several of his cables broke so he called a halt until he could find stronger cables. When he returned, he found that the locals had dismantled his platform to make wine barrels leading to him abandoning the project.

The hot water supplied baths while the cold operated fountains and supplied drinking water. This plumbing technology was later lost and only re-discovered in the Middle Ages.

The emperor Caligula had a very brief reign. He ruled from 37A.D. to 41A.D. for a period of three years and ten months. He is generally depicted by historians as a cruel megalomaniac who was noted for many excesses, not the least of which was his ability to squander, in a year, the entire resources of the Imperial treasury that had been built up by his predecessor Tiberius, on extravagant but useless schemes.

Caligula’s brief reign came to an abrupt end when he was assassinated by members of the Praetorian Guard, who were sickened by his depraved behavior and reckless expenditure. He was twenty-eight years of age.