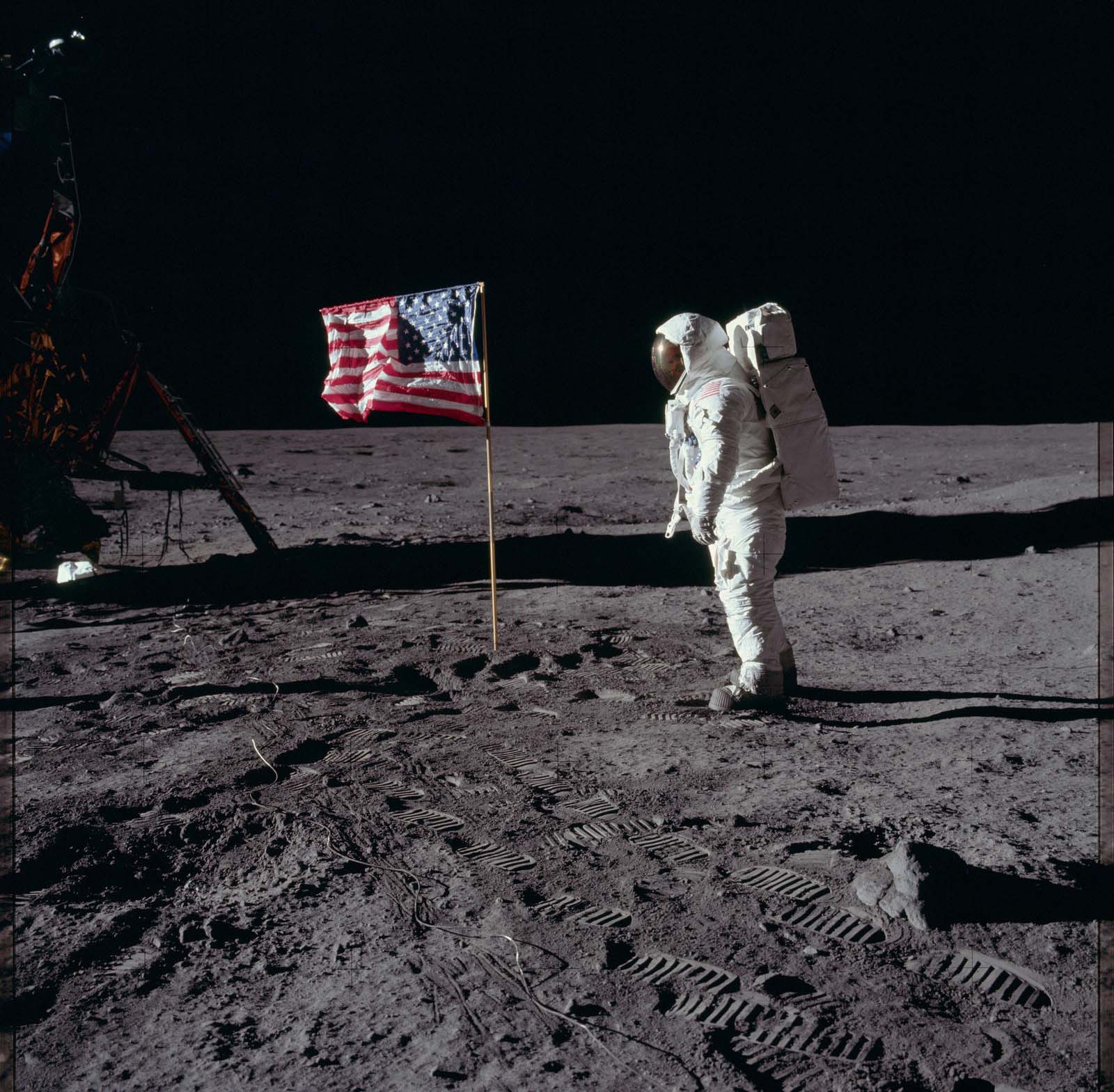 Apollo 11 astronaut Edwin Buzz Aldrin poses with the US flag planted on the Sea of Tranquility. If you look closely, you can see Aldrin’s face through his helmet visor.

At 10:39 pm on July 20, 1969, Neil Armstrong opened the hatch of the lunar module. As he made his way down the lunar module’s ladder, a television camera attached to the craft recorded his progress and beamed the signal back to Earth, where hundreds of millions watched in great anticipation.

At 10:56 pm, Armstrong spoke his famous quote, which he later contended was slightly garbled by his microphone and meant to be “that’s one small step for a man, one giant leap for mankind”. He then planted his left foot on the gray, powdery surface, took a cautious step forward, and humanity had walked on the moon.

Buzz Aldrin joined him on the moon’s surface at 11:11 pm, and together they took photographs of the terrain, planted an American flag, ran a few simple scientific tests, and spoke with President Richard Nixon via Houston.

By 1:11 am on July 21, both astronauts were back in the lunar module and the hatch was closed. The two men slept that night on the surface of the moon, and at 1:54 pm the Eagle began its ascent back to the command module.

Among the items left on the surface of the moon was a plaque that read: “Here men from the planet Earth first set foot on the moon–July 1969 A.D–We came in peace for all mankind”.

The Apollo 11 mission used Hasselbad 500ELM cameras, a camera which had been available commercially for about 5 years at the time. It was, like most cameras at the time, completely wireless.

It has an electric motor drive for advancing the film between shots, but other than that it was completely mechanical. Like all film back then it had to be processed, except in this case they had to travel the quarter-million miles back to Earth before they knew if they had a good shot or not.

They didn’t even use viewfinders to frame these shots, they were all taken “from the hip” and if you look through the thousands of photos taken from the moon the number of really poorly framed shots outweigh the good shots by about 1 to 10.

Because of the confusion about “who is that astronaut”, later Apollo missions (all after Apollo 12) had red stripes marking the commander on their spacesuits.

There would be five more successful lunar landing missions, and one unplanned lunar swing-by, Apollo 13. The last men to walk on the moon, astronauts Eugene Cernan and Harrison Schmitt of the Apollo 17 mission, left the lunar surface on December 14, 1972.