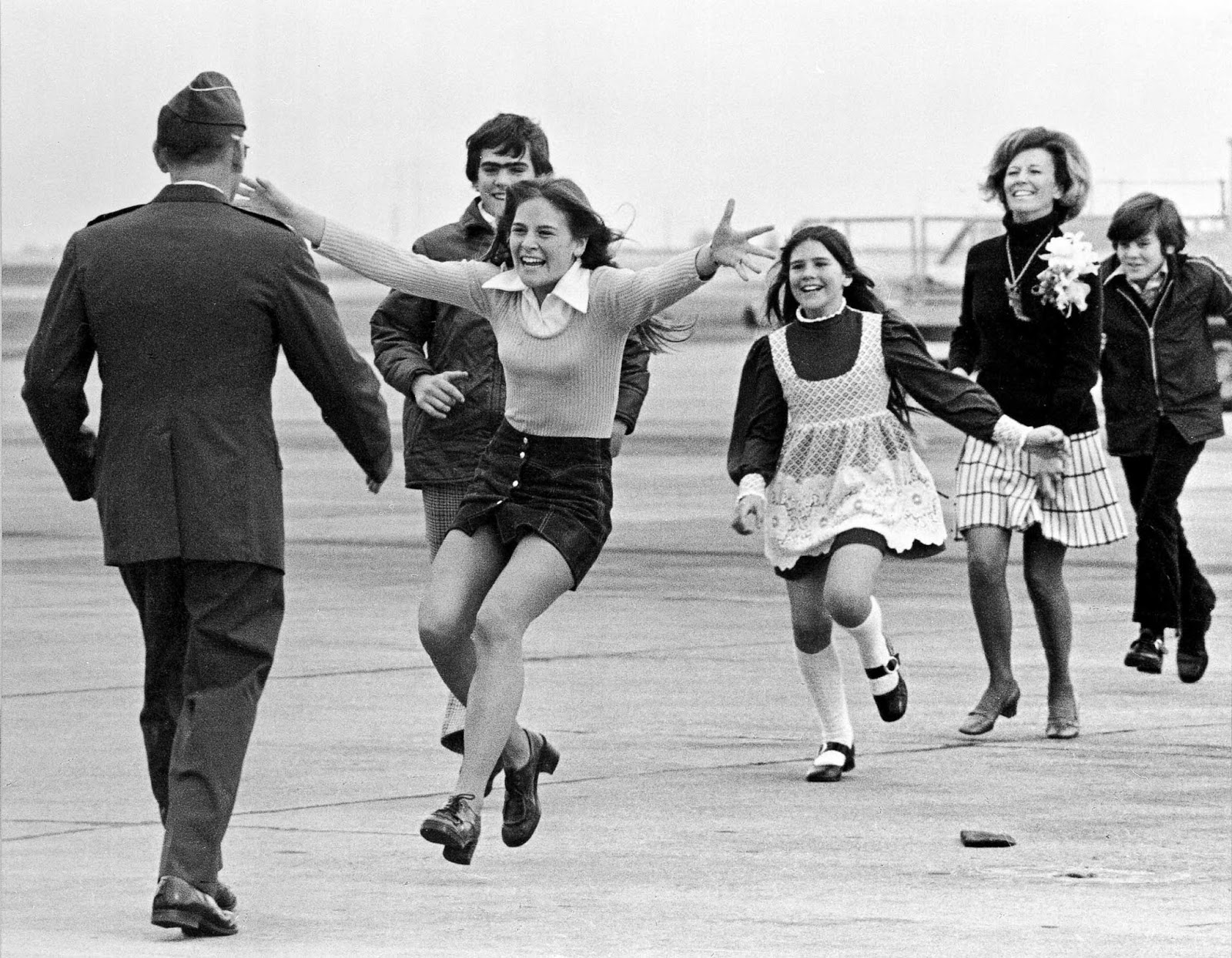 The photograph came to symbolize the end of United States involvement in the Vietnam War, and the prevailing sentiment that military personnel and their families could begin a process of healing after enduring the horrors of limited war.

After spending more than five years in a North Vietnamese camp, Lt. Col. Robert L. Stirm is reunited with his family at Travis AFB, March 13, 1973.

Burst of Joy is a Pulitzer Prize-winning photograph by Associated Press photographer Slava “Sal” Veder. The photograph came to symbolize the end of United States involvement in the Vietnam War and the prevailing sentiment that military personnel and their families could begin a process of healing after enduring the horrors of war.

Prisoners of war freed from the prison camps in North Vietnam landed at Travis Air Force Base in California. Even though there were only 20 POWs aboard the plane almost 400 family members turned up for the homecoming.

Veder was part of big press showing and remembers that: “You could feel the energy and the raw emotion in the air”. The photograph depicts United States Air Force Lt. Col.

Robert L. Stirm being reunited with his family, after spending more than five years in captivity as a prisoner of war in North Vietnam. The centerpiece of the photograph is Stirm’s 15-year-old daughter Lorrie, who is excitedly greeting her father with outstretched arms, as the rest of the family approaches directly behind her.

Despite outward appearances, the reunion was an unhappy one for Stirm. It is depressing to read that three days before the picture was taken Lt. Col. Robert L. Stirm received a letter from his wife that she wanted a divorce.

LT. COL. Robert L. Stirm, a recently released prisoner of war, greets his family upon his arrival at Travis Air Force Base.

He fought and lost against her in court. He then had to live with his mom in San Francisco taking care of his older kids. It looks more like Prisoner of Wife.

Three decades after the Stirm reunion, the scene, having appeared in countless books, anthologies, and exhibitions, remains part of the nation’s collective consciousness, often serving as an uplifting postscript to Vietnam.

About the picture and its legacy, Lorrie Stirm Kitching once noted, “We have this very nice picture of a very happy moment, but every time I look at it, I remember the families that weren’t reunited, and the ones that aren’t being reunited today — many, many families — and I think, I’m one of the lucky ones”.

Another account about this story (taken from a newspaper): “But there was more to the story than was captured on film. Three days before Stirm landed at Travis, a chaplain had handed him a Dear John letter from his wife. “I can’t help but feel ambivalent about it,” Stirm says today of the photograph. “I was very pleased to see my children—I loved them all and still do, and I know they had a difficult time—but there was a lot to deal with.”

Lorrie says, “So much had happened—there was so much that my dad missed out on—and it took a while to let him back into our lives and accept his authority.” Her parents were divorced within a year of his return.

Her mother remarried in 1974 and lives in Texas with her husband. Robert retired from the Air Force as a colonel in 1977 and worked as a corporate pilot and businessman. He married and was divorced again.

Below it’s an article published in The Roanoke Times in 1993. Taken The Virginia Tech Library.

TO THE WORLD, the photo of his family greeting the Air Force officer after his return from a North Vietnamese camp symbolized the joy of a nation leaving an ugly war. To him, the scene was and remains a lie.

His older daughter is racing to meet him, arms outstretched, both feet off the ground, face split wide in a giddy smile. Close behind on the tarmac, also running, are his two grinning boys; his younger daughter; his tall, attractive wife.

The joy of this reunion leaps out from the pages of history: Robert Stirm, crisp in his Air Force uniform, was finally home after nearly 5 1/2 years in the prison camps of Vietnam.

The Pulitzer Prize-winning picture that captured that very personal, yet most public of moments symbolizes the end of U.S. involvement in the Vietnam War, the bittersweet homecoming of 591 POWs in 1973. Twenty years later, the picture is very different.

In his home near San Francisco, a Vietnam history book is opened to that page of Stirm’s life. He gazes at it. “I have several copies of the photo,” he says, “but I don’t display it in the house.”

Why? Stirm laughs. He points to the picture, to the tall woman – just outpacing her younger son – dressed in a blue-and-white pleated skirt and blue sweater, sporting a large corsage. “Because of her,” he says simply.

Stirm’s anger and bitterness these two decades later seem directed more at the woman in the famous black-and-white photo – his former wife, Loretta – than at the Vietnamese captors who tortured him.

He says he survived the torture, the mock executions, the dread-filled days and nights, so he could return to her, only to be handed a “Dear John” letter by a chaplain upon his release.

“I have changed drastically – forced into a situation where I finally had to grow up,” the letter read in part. “Bob, I feel sure that in your heart you know we can’t make it together – and it doesn’t make sense to be unhappy when you can do something about it. Life is too short.”

To Stirm, 60, it is cruel irony that so public a reunion had so hollow a core. The photo, taken by Sal Veder of The Associated Press, “brought a lot of notoriety and publicity to me and, unfortunately, the legal situation that I was going to be faced with, and it was kind of unwelcomed,” Stirm said.

“In some ways, it’s hypocritical, because my former wife had abandoned the marriage within a year or so after I was shot down. And she did not even have the honor and integrity to be honest with the kids. She lived a lie. This picture does not show the realities that she had accepted proposals of marriage from three different men. . . . It portrays everybody there as happy to see me.”

But for Stirm’s older daughter, Lorrie Kitching, the photo captures a wonderful, pure moment in time. It brought basket after basket of fan mail and newspaper clippings from all over the world, she recalls.

Lorrie, 35, lives in San Mateo, Calif., with her second husband and an 11-year-old son from her first marriage. She works in the sales department of MediaSourcery, marketers of multimedia software.

Tears filled her eyes as she looked at the picture recently and saw her 15 1/2-year-old self about to leap into her father’s arms, her airborne feet in her first high heels.

“It’s a wonderful piece of history that we just happened to stumble into,” she says. “It never would have gone away in my mind, but seeing that photo brings it all back again – just all the joy that was there.

“It was like Christmas. You knew Christmas was going to be great, but you didn’t really know what was going to happen on Christmas, and that was just like when Dad came home. It was Christmas morning. You were racing down the stairs because we knew that there was a great present waiting for us. Everybody’s face is genuinely happy.”

Directly behind Lorrie in the photo is Cindy, the youngest child. She had turned 11 two days before her father returned home. She is wearing her favorite dress, a black jumper with a lacy pinafore, knee socks and Mary Janes.

Today, she is Cindy Pierson, 31, the mother of an 8-year-old girl. “It seems like another lifetime ago,” she says. “I look at the picture, and I don’t see me. . . . I don’t feel like I was really a part of it. I was so young. I didn’t really know him when he left and I thought it would be wonderful to have a dad because all my friends had dads at their functions.”

Robert Stirm Jr. is 34 now, the father of three sons and a dentist in Concord, Calif. His sister, Cindy, is his office manager. In the photo, he is 14, a broad smile on his face.

“People recognized this photo,” he says. “There’s some sort of notoriety in that. But the photo per se didn’t really change my life – it was my father coming home that changed my life.”

Roger, 12 at the time, trails everyone. He followed in his father’s footsteps; he is a captain in the Air Force. And Loretta? She is married to a lawyer and still lives in Foster City. She declined to be interviewed.

No one is sure why she showed up at Travis Air Force Base in California that St. Patrick’s Day in 1973, but she alluded to it in the letter handed to Stirm when he arrived in the Philippines before returning to the United States.

“I love you – we all love you, but you must remember how very unhappy we were together,” it said. “It wasn’t your fault – we are extremely unsuited and managed to make each other miserable. . . .

“I can’t begin to tell you how proud we are of you. The children and I never missed a night saying a prayer for your safe return. I have your pictures up and your certificates and have kept you very much with us while you were gone and the children have not forgotten their father.

“I would like to see you when you come home, but will understand if you would rather not.” Bob and Loretta met at a party just after he graduated from Air Force cadet school; they were married in 1955 when she was 19. They divorced a year after he returned from Vietnam, and each remarried within six months.

“She had a rough job, raising four children on her own,” Lorrie says. “She was very young.” Stirm was awarded custody of Lorrie and Robert Jr.; Loretta was given custody of Roger and Cindy. She also received the home and 42.9 percent of Stirm’s retirement pay, though the judge said a great deal of evidence showed a pattern of misconduct on her part during Stirm’s imprisonment.

“It’s not fair. It’s not just,” Stirm says now. “I’m the one that lives with all the aches and pains from my imprisonment, but she continues to get paid.” Still, he says, the couple have come together for weddings and other family events, and all four children are on good terms with both parents.

Stirm retired from the Air Force in 1977 after 25 years of service. He joined Ferry Steel Products, the business his grandfather started in San Francisco, but found it ungratifying. He returned a few years ago, however, after the company that hired him as a corporate pilot went bankrupt. Though it revives the pain, it is inevitable that he see the picture again from time to time.

“The momentum to stay alive for my family’s sake was very strong, because I had four neat children,” he says quietly, “and what I believed to be a neat wife that I wanted to get back to see.