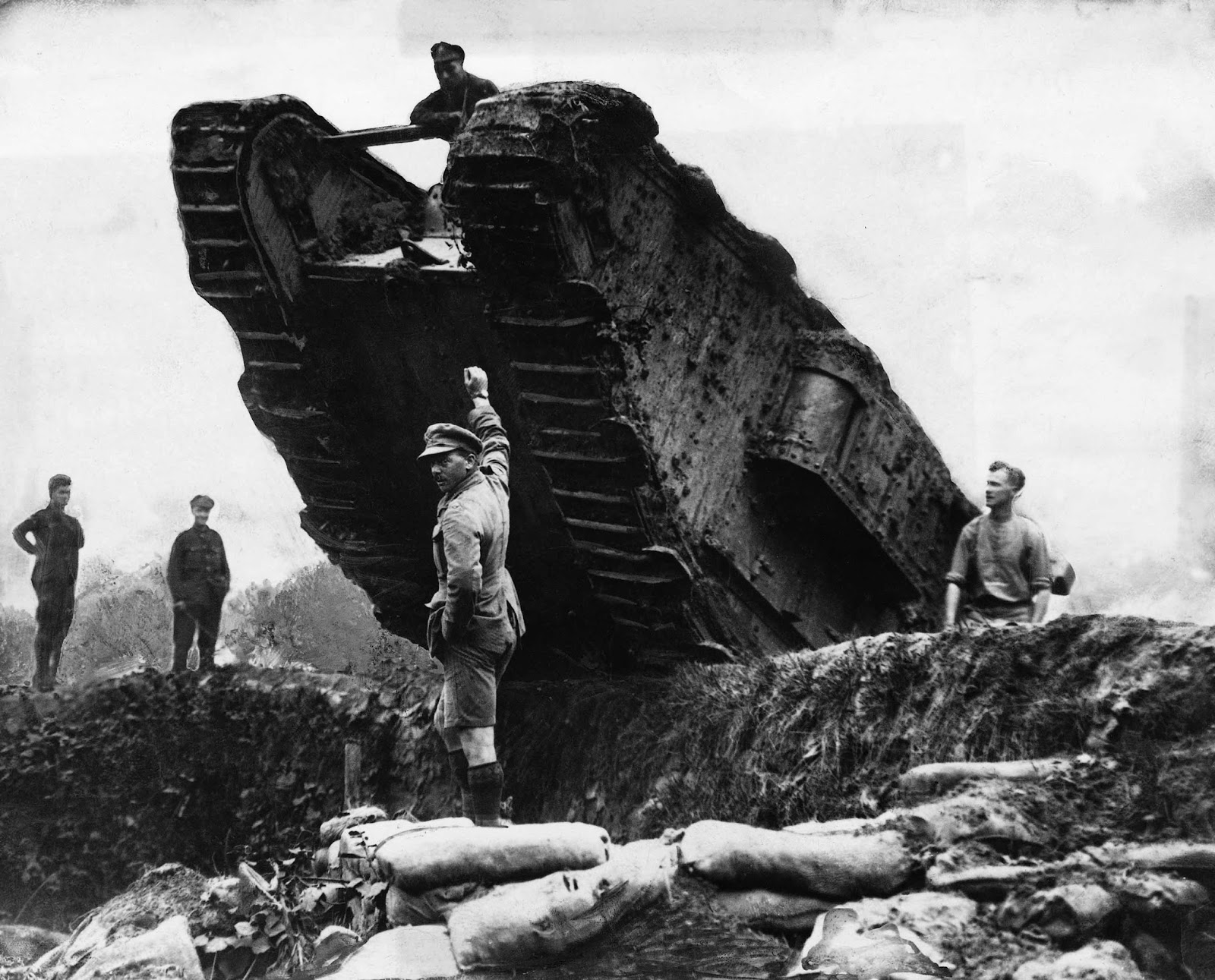 Members of the British Army maneuver a tank, or “landship”, over a trench during the Battle of Cambrai just west of the French town.

When the British dispatched 400 tanks against the German army at the Battle of Cambrai in 1917, the result was a draw — but legend quickly declared the tank a winner following its first major role in combat.

The Battle of Cambrai, fought in November-December 1917, proved to be a significant event in World War One. Cambrai was the first battle in which tanks were used en masse.

In fact, Cambrai saw a mixture of tanks being used, heavy artillery and air power. Mobility, lacking for the previous three years in World War One, suddenly found a place on the battlefield – though it was not to last for the duration of the battle. Aside from their undoubted initial value as a surprise tactic the tanks were deemed to be of limited use in offensive operations, unwieldy and prone to malfunction.

Cambrai was an important town as it contained a strategic railhead. In front of it lay the very strong Hindenburg Line – a defensive position in which the Germans put a great deal of trust.

The plan included an attack on the Hindenburg Line and the use of three cavalry divisions that would encircle Cambrai, thus cutting it off.

The attack was duly launched at dawn on the morning of November 20, 1917, with all available tanks advancing across a 10 km front. 476 tanks were accompanied by six infantry and two cavalry divisions (the latter to exploit any breakthrough), plus a further 1,000 guns. Notably, the attack was not preceded by a preliminary bombardment, helping to ensure complete surprise.

Within hours the lightly defended Germans were forced back some 6 km to Cambrai, the three trench systems of the Hindenburg Line pierced for the first time in the war. The British achieved success all along the line.

Approximately 8,000 prisoners and 100 guns were captured on the first day alone. Much encouraged (and greatly surprised) by the notable gains of the first day, Haig (the British Commander-in-Chief) determined to press on with the attack, although once the initial surprise had passed British gains proved much harder to come by.

Unfortunately, a lack of available support to follow up the surprise breakthrough of the first day resulted in a critical loss of momentum. Erich Ludendorff, the effective head of the German Third Supreme Command, ordered an immediate counter-attack.

Some 20 divisions were deployed during the German counter-attack, which deployed so-called Hutier infiltration tactics (named after the German commander who had first deployed them, Oskar von Hutier). Within a week virtually all lost ground had been reclaimed.

The British plan ultimately failed to produce a major breakthrough, but the use of new tactics proved that the Germans could no longer consider themselves impregnable in their deeply entrenched positions.

If ultimately the massed deployment of tanks had failed to achieve the desired breakthrough, it had nevertheless demonstrated the potential for targeted use of the tank in offensive operations.

The first use of tanks on the battlefield was the use of British Mark I tanks at the Battle of Flers-Courcelette (part of the Battle of the Somme) on 15 September 1916, with mixed results; many broke down, but nearly a third succeeded in breaking through.

The German high command, having overcome their initial alarm at the sudden appearance of the huge mechanical beasts upon the battlefield, came to regard the tank with disdain, a device readily destroyed by the use of concentrated field artillery. Given such an attitude it was perhaps unsurprising that German tank development came relatively late in the war.

Sheldon wrote that both sides had c. 40,000 casualties and questioned the British Official History figure of c. 53,000 German casualties, calling them “inflated for no good reason”.

Miles recorded British casualties from 20 November – 8 December as 47,596, of whom 9,000 were taken prisoner and an official German total of c. 41,000 casualties, which Miles increased to 53,300 on the assumption that German figures omitted lightly wounded, which were counted in British casualty records.