King George V and Queen Mary on the ship to India.

The site for the durbar was in northwest Delhi and a city of tents came up across 25 square miles. At the center of the camp was the King’s pavilion, spread over 85 acres.

Camps of officials and Indian princes were located in order of precedence. The camp had its own railway, connecting it to the amphitheatre where the durbar was held. Sixty four kilometers of new roads and 80 km long water mains were constructed.

The royal couple arrived at Coronation Park in their Coronation robes, the King-Emperor wearing the Imperial Crown of India with eight arches, containing 6170 exquisitely cut diamonds, and covered with sapphires, emeralds, and rubies, with a velvet and miniver cap all weighing 34 ounces (965 g). 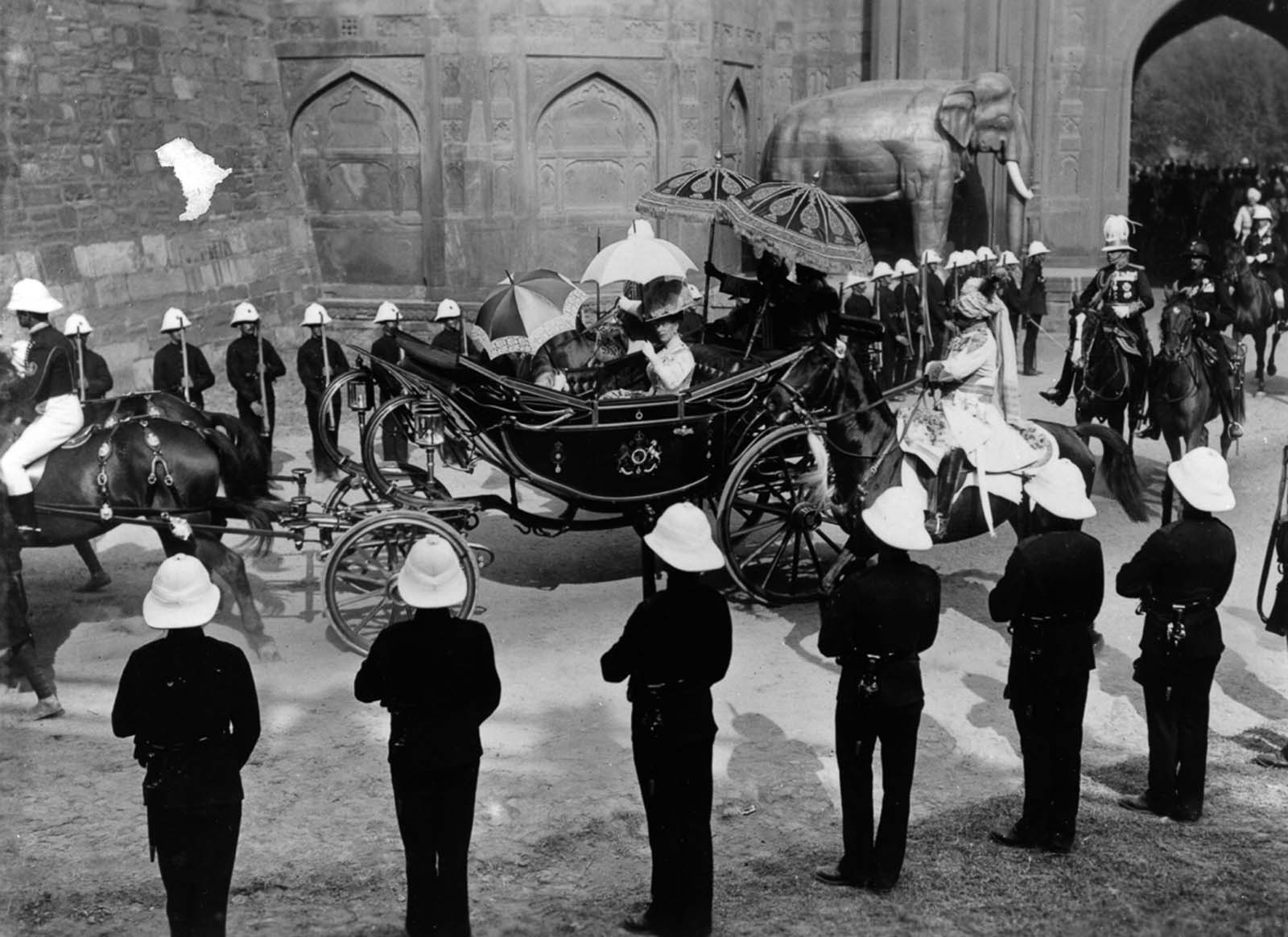 Queen Mary rides past honor guards on the way into Delhi.

The ceremonies included a 101-gun salute, parades, obeisance by rulers of princely states, distribution of medals to military officials, and the proclamation.

The British royals received homage from the local rulers; controversy ensued when the Gaekwar of Baroda, Maharaja Sayajirao III, approached the royal couple without his jewellery on, and after a simple bow turned his back to them when leaving. His action was interpreted at the time as a sign of dissent to British rule.

The Delhi Durbar marked a watershed of sorts, as King George V used this occasion to announce the shifting of the capital to Delhi. This triggered a massive building initiative, where a new city was planned and built.

The capital was intended to recreate the grandeur of the Mughal Empire, with a new classical western air. But within 36 years of the Delhi Durbar, the British had to move out of India. 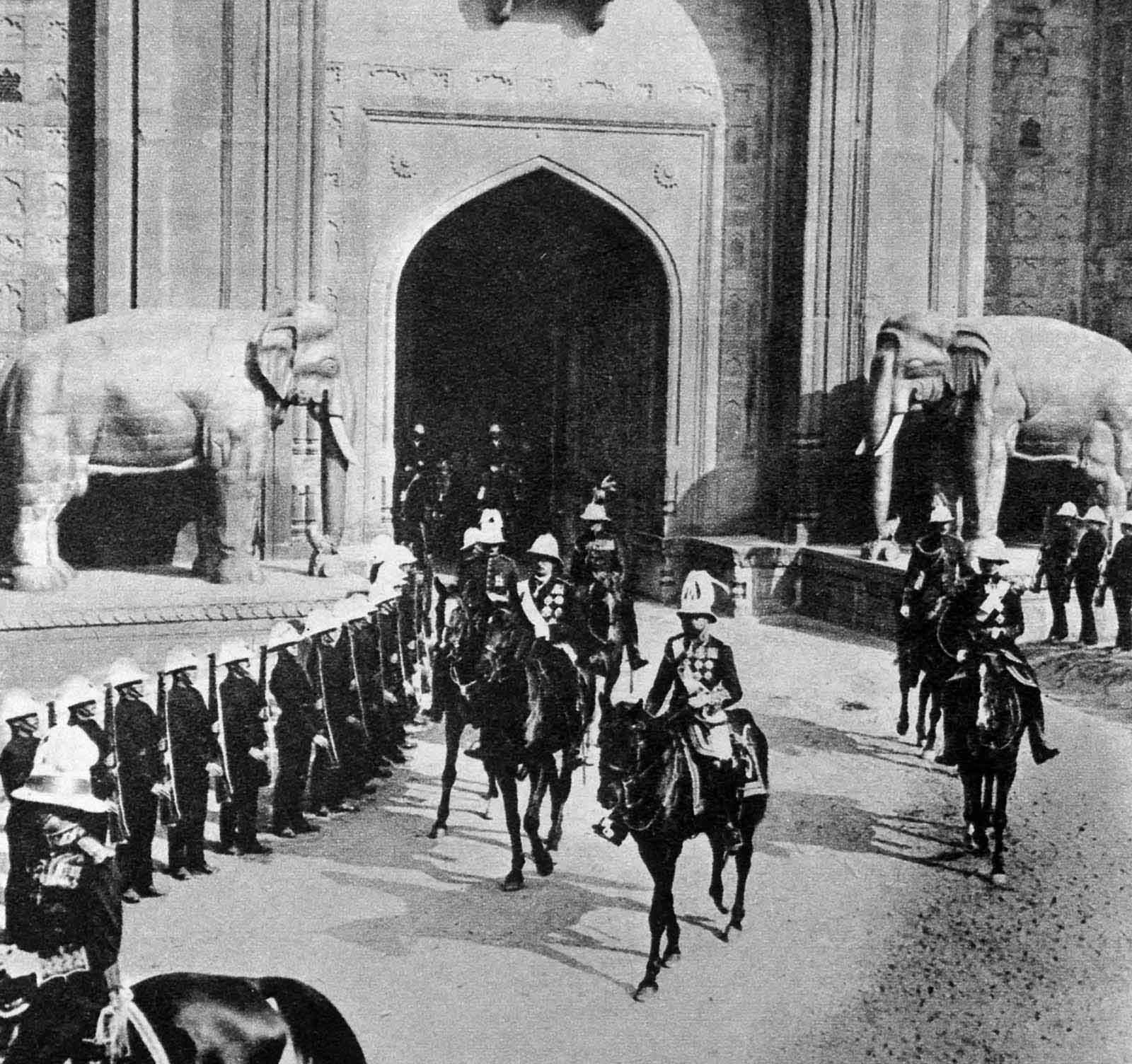 After the ceremony, a visit to Nepal to participate in a hunt of tiger and rhinoceros was organized for King George’s pleasure. Although King Tribhuvan Bir Bikram Shah suddenly died on 11 December 1911, it was decided to proceed with the hunting preparations.

During these ten hunting days, the king and his party killed 18 rhinos, 39 tigers, 4 sloth bears, several porcupines and leopards. The predators were baited with cattle tied up at the edges of the jungle.

A young live rhino was presented to them by the prime minister of Nepal and transported to the London Zoo. The events were captured in photographs found in three albums preserved in the library of the Royal Commonwealth Society (University of Cambridge) and the Australian National University.

It is not known how all the trophies were distributed but four of the tiger skins were given to national museums across the United Kingdom – London, Edinburgh, Cardiff, and Dublin – and four to provincial museums – Exeter, Norwich, Leicester, and Bristol.

British diplomat and naturalist Brian Houghton Hodgson who participated in the hunting expedition, documented over 560 species of birds (with 9,500 specimens), 900 mammals, and 80 reptiles. 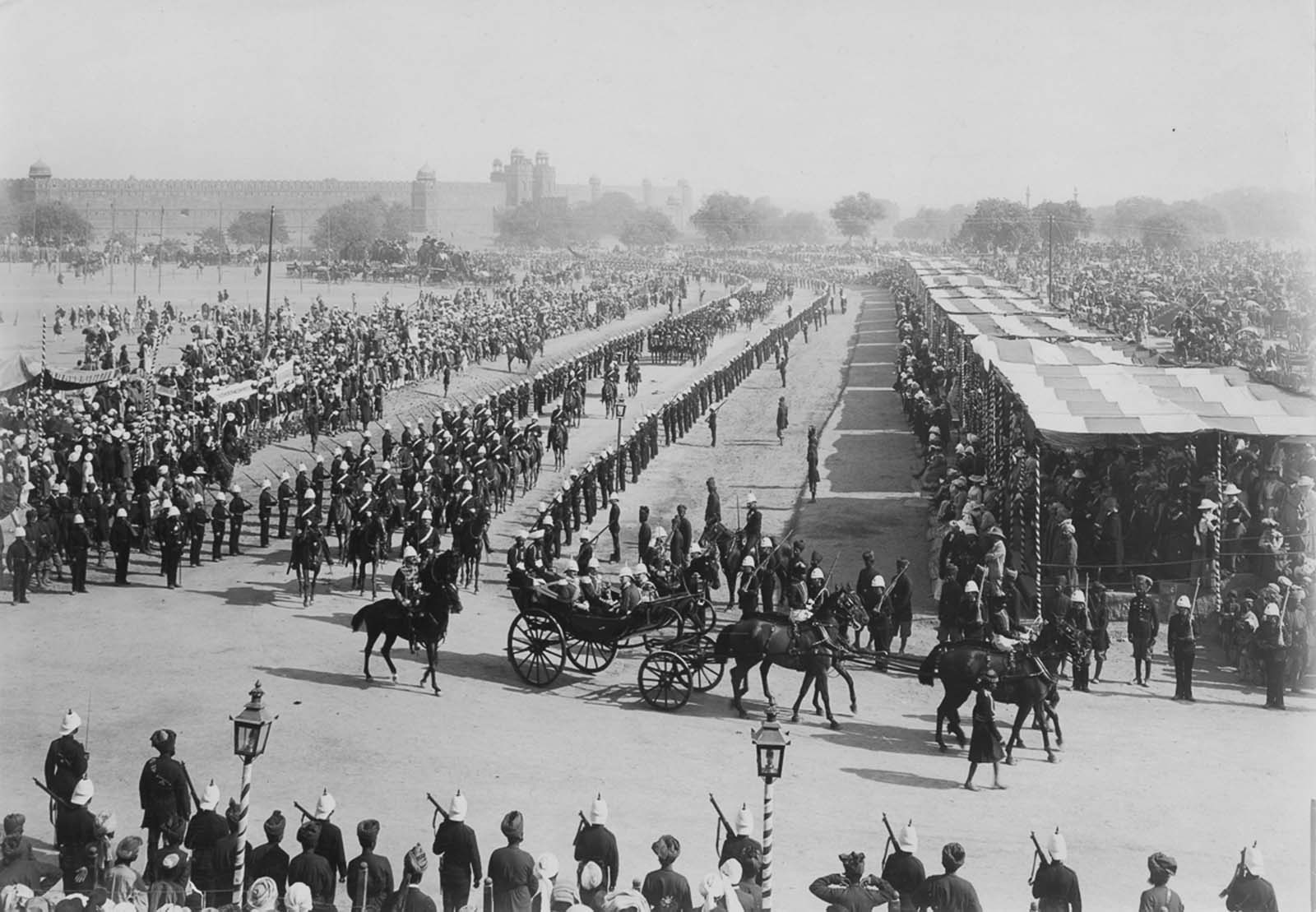 A military procession is held in Delhi to honor the English King and Queen. 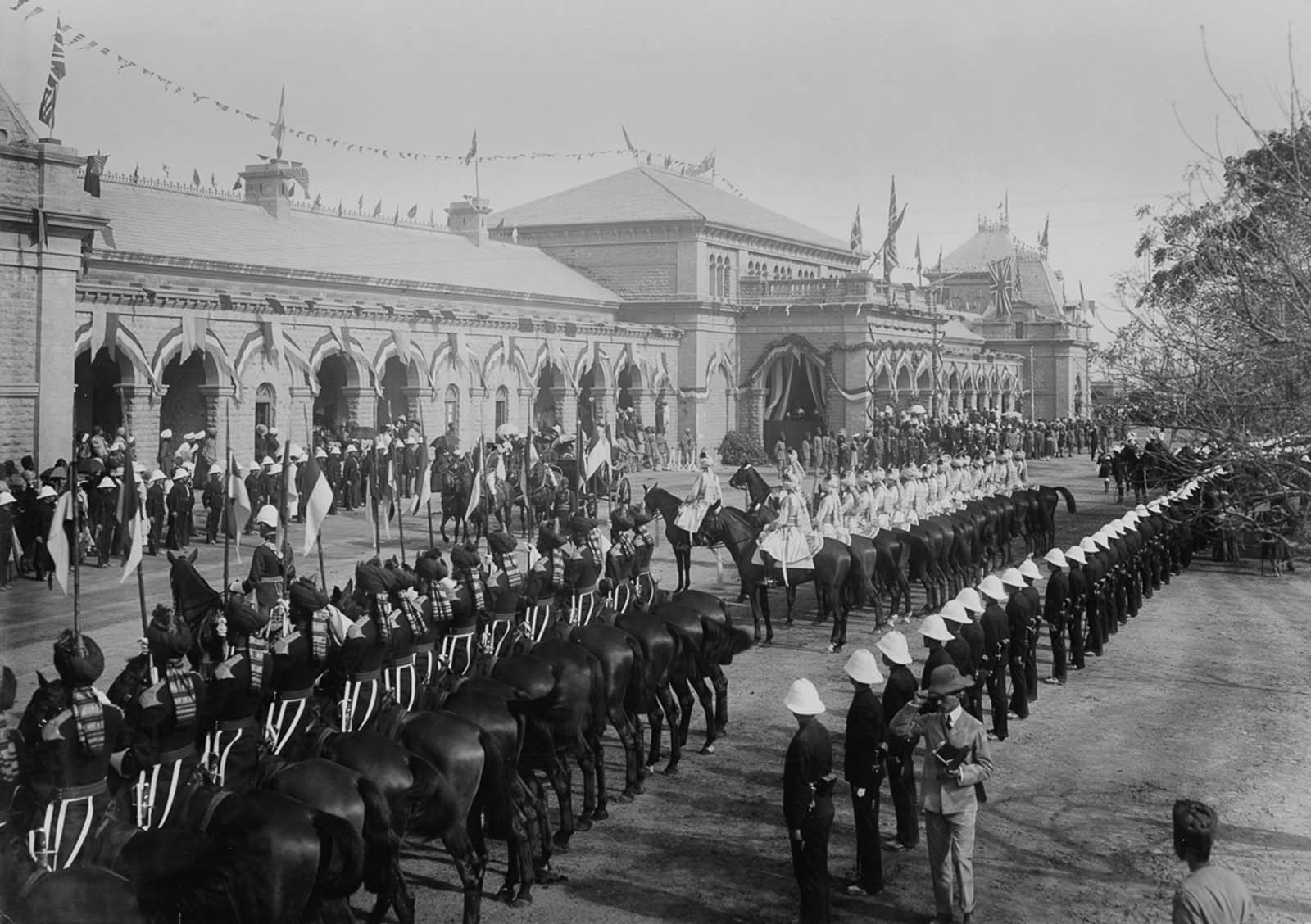 The Imperial Cadet Corps assembles outside the Delhi railway station. 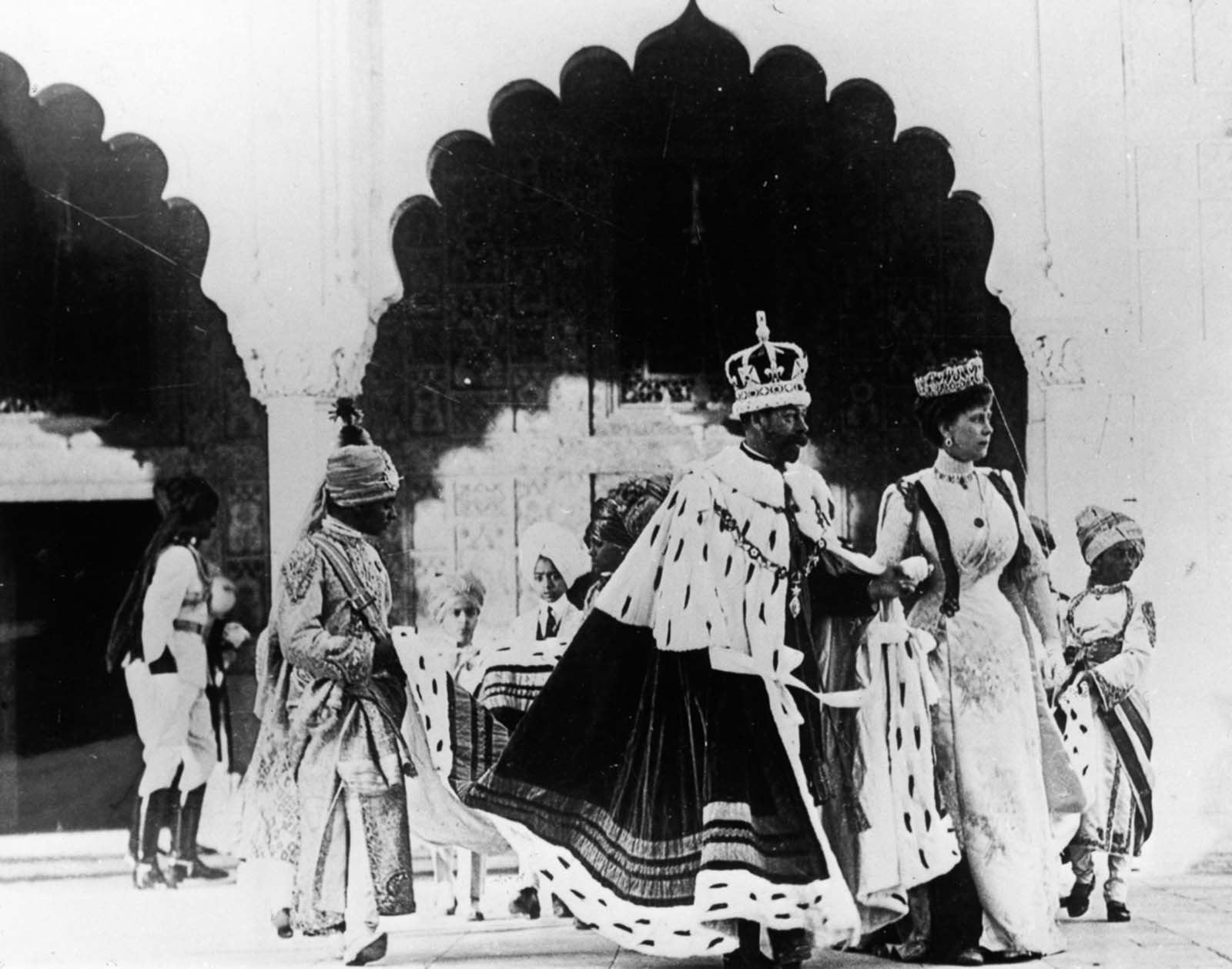 King George and Queen Mary arrive at the coronation Durbar in Delhi. 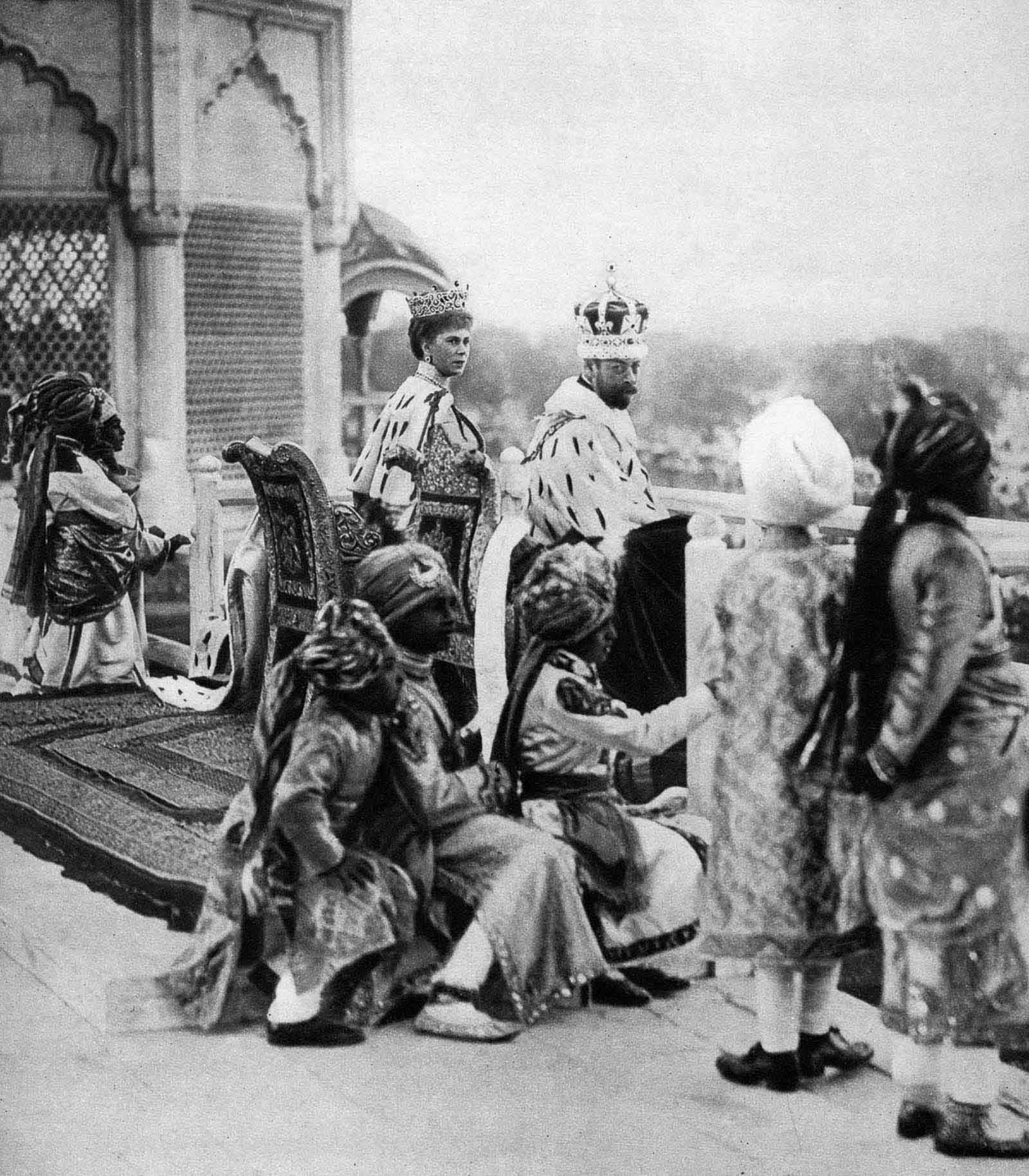 The king and queen attend the ceremony in Delhi. 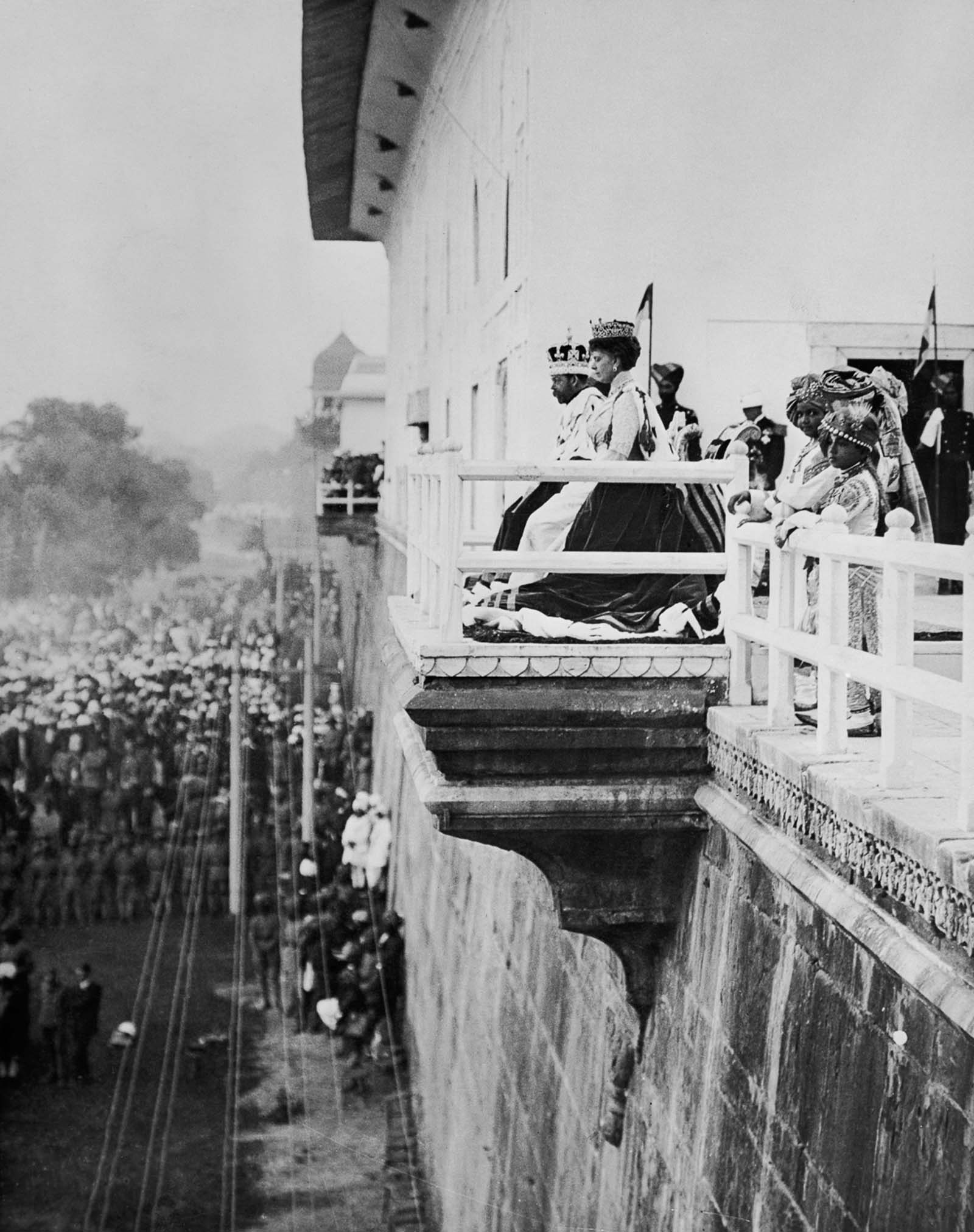 The king and queen make a public appearance on the balcony of the Red Fort in Delhi. 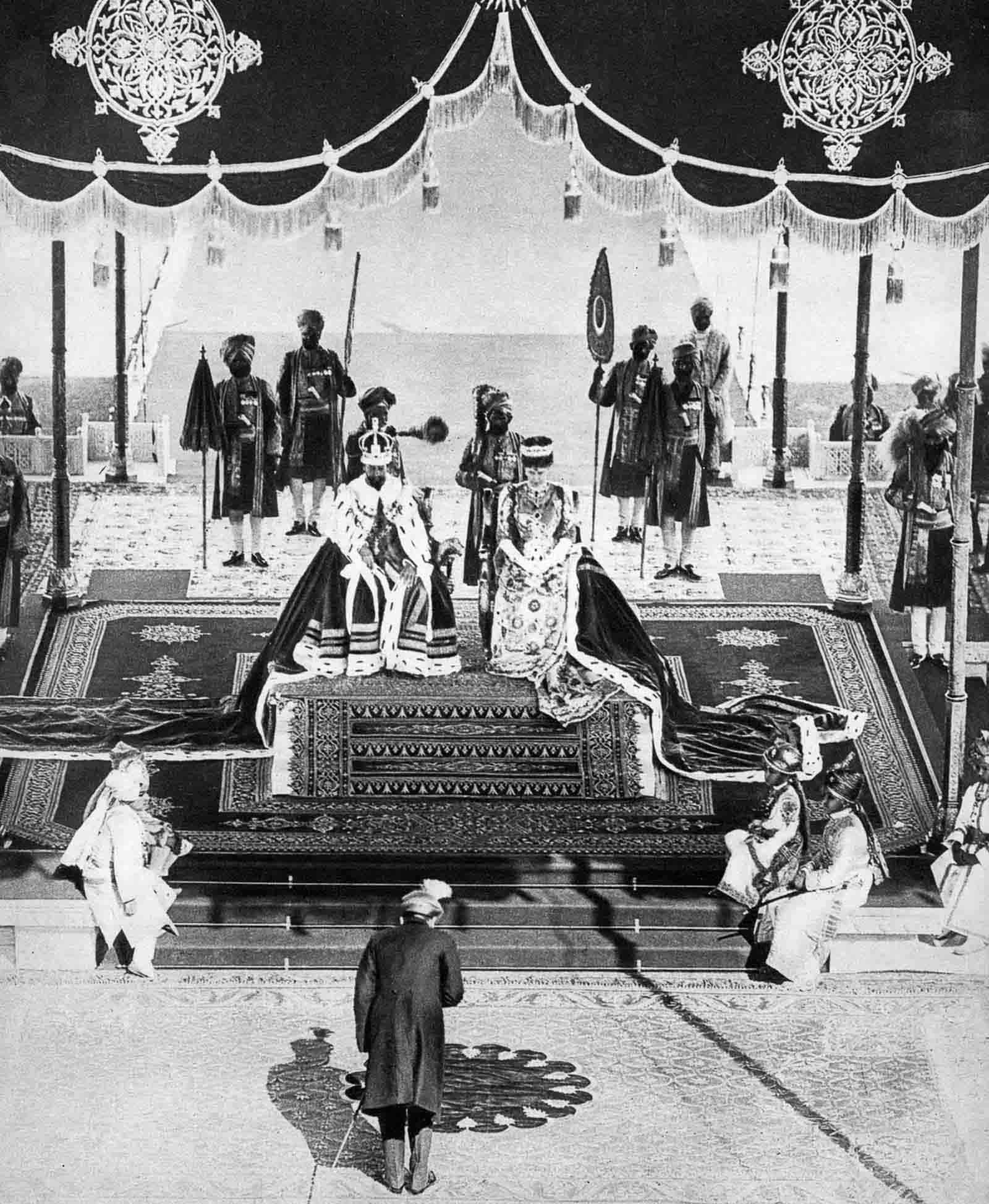 The Nizam of Hyderabad pays homage to the king and queen at the Delhi Durbar. 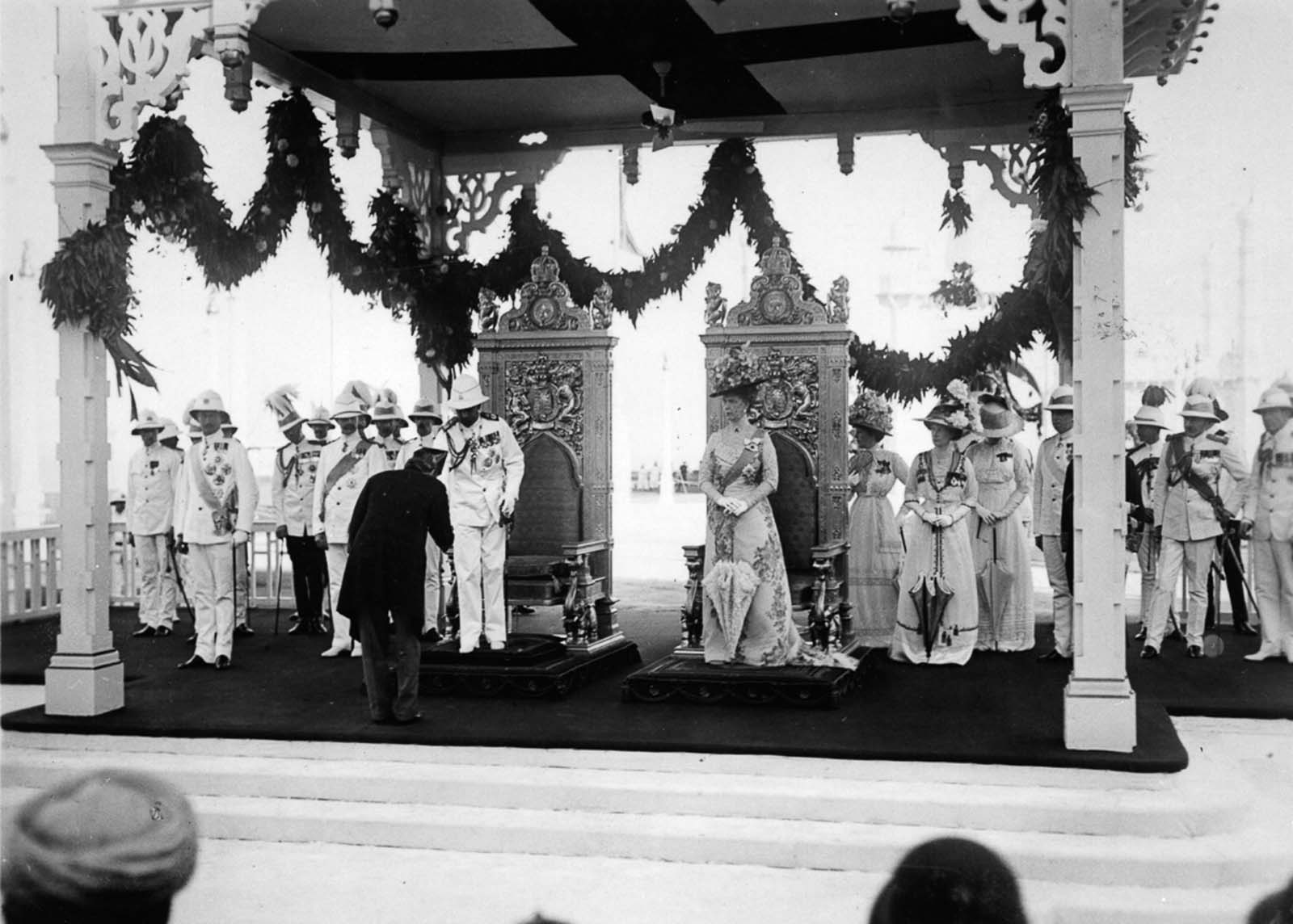 The king and queen greet onlookers in Bombay. 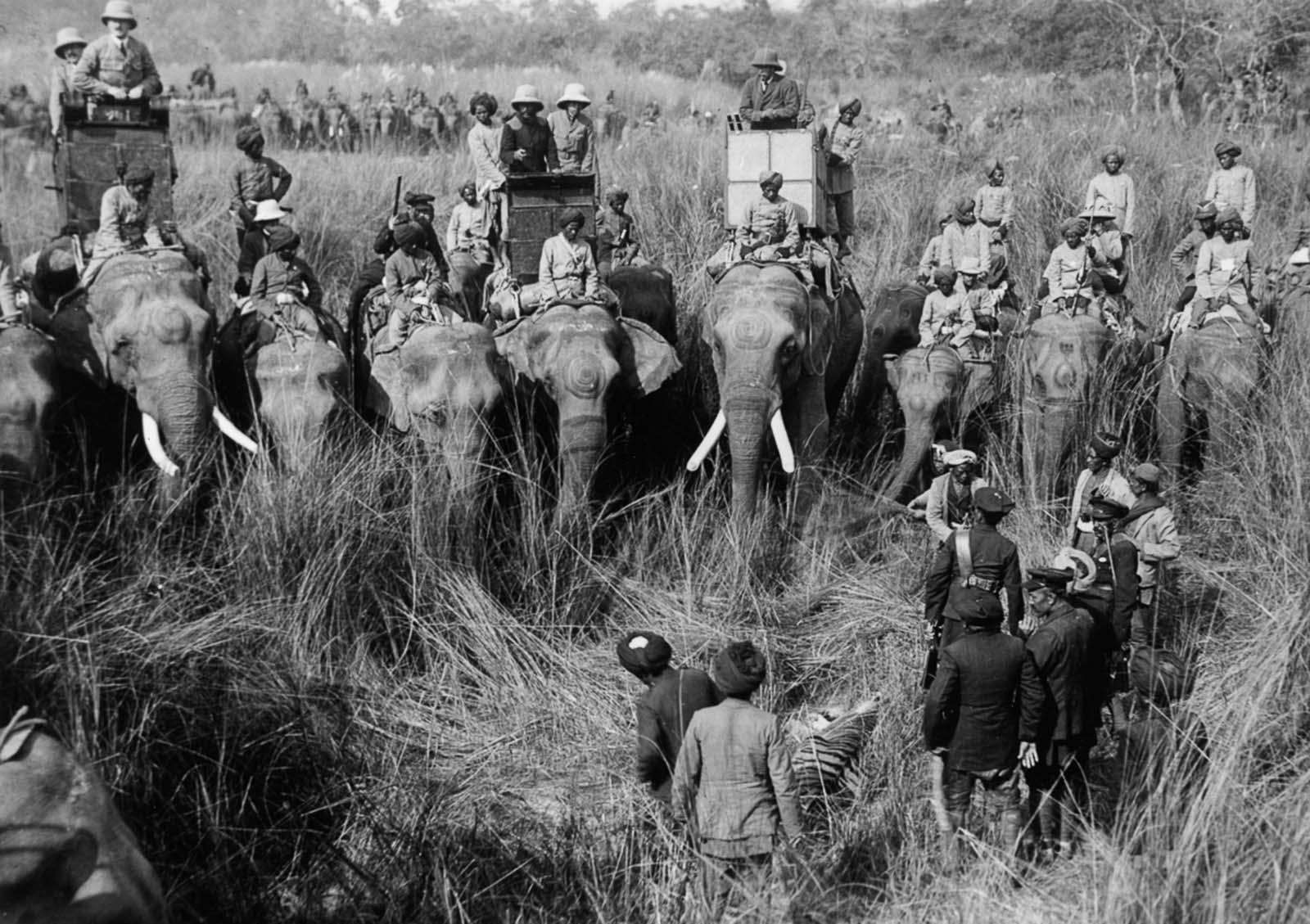 King George V (center right) inspects a killed tiger from atop an elephant. 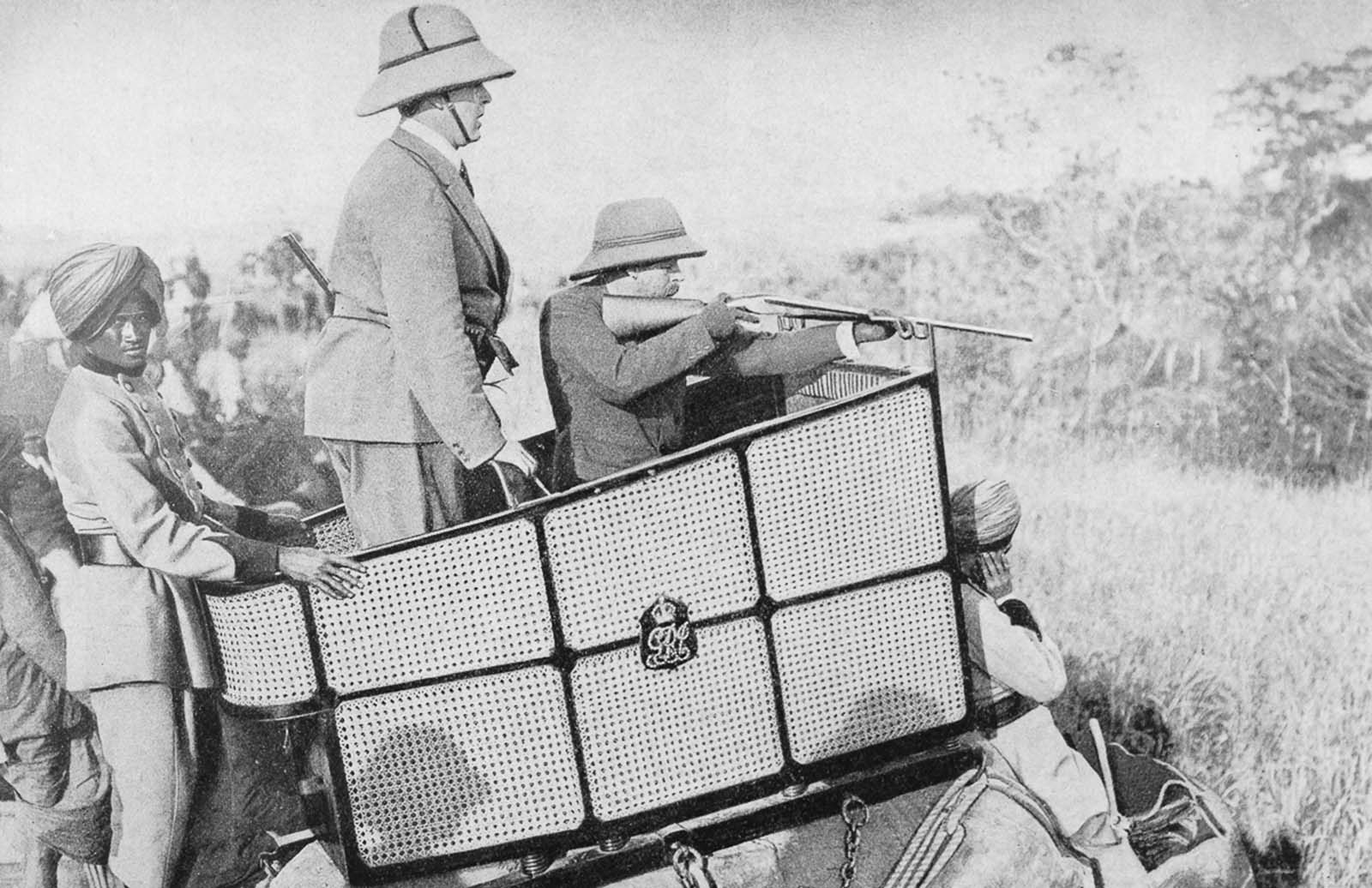 The king takes aim at a tiger as his elephant driver covers his ears. 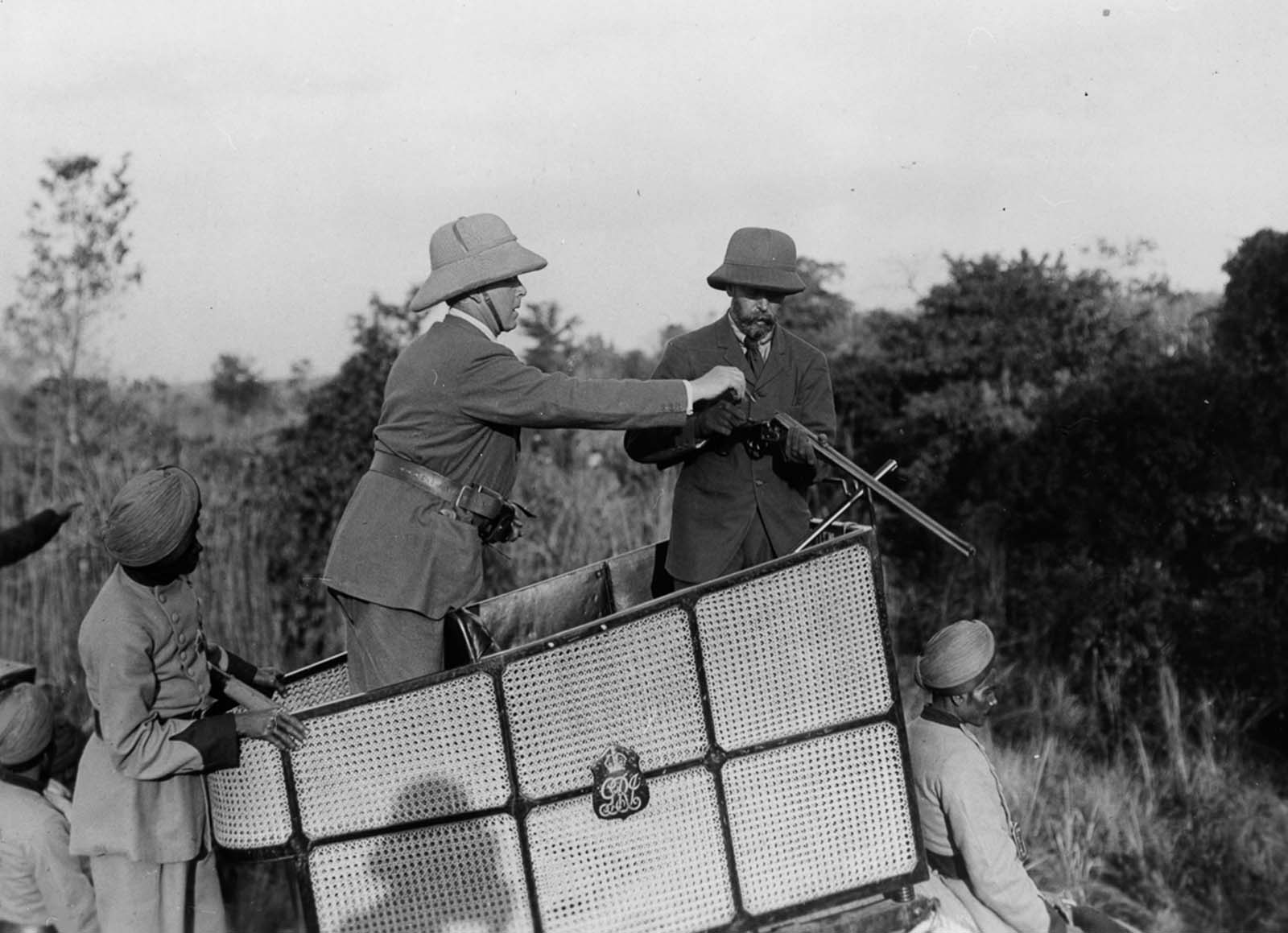 The king loads his gun during the tiger hunt. 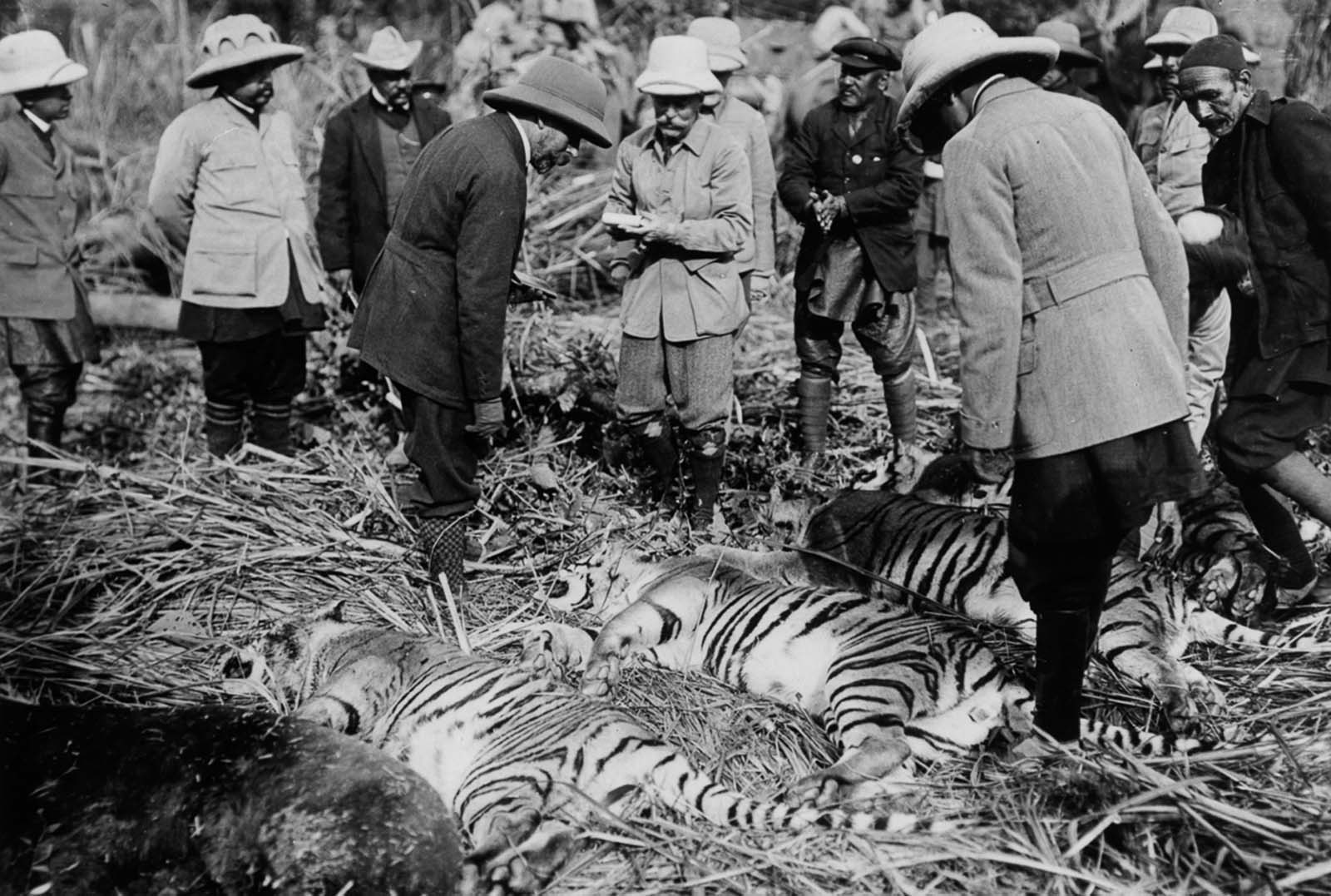 The king inspects the day’s kill. 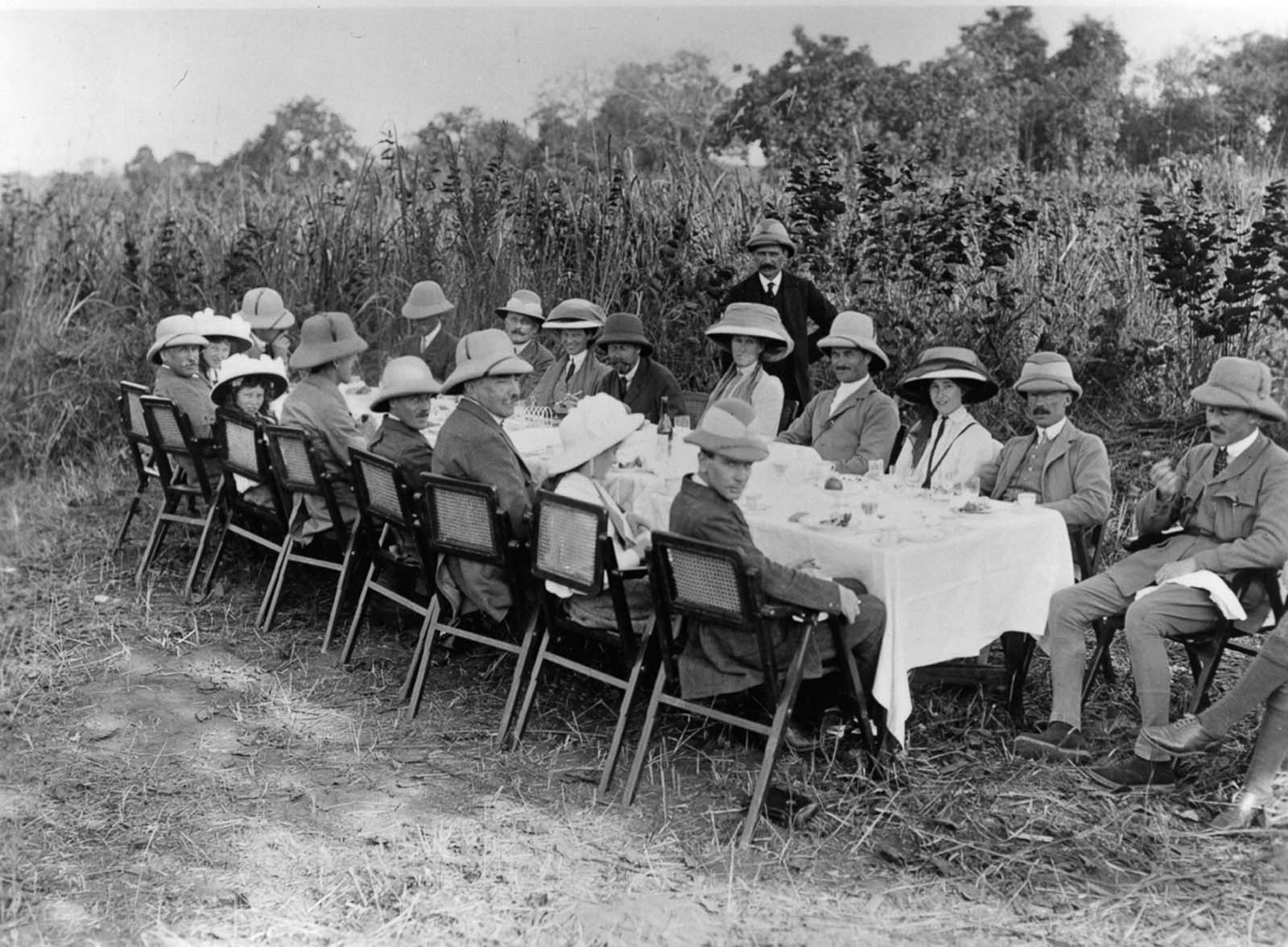 The hunting party breaks for a meal. 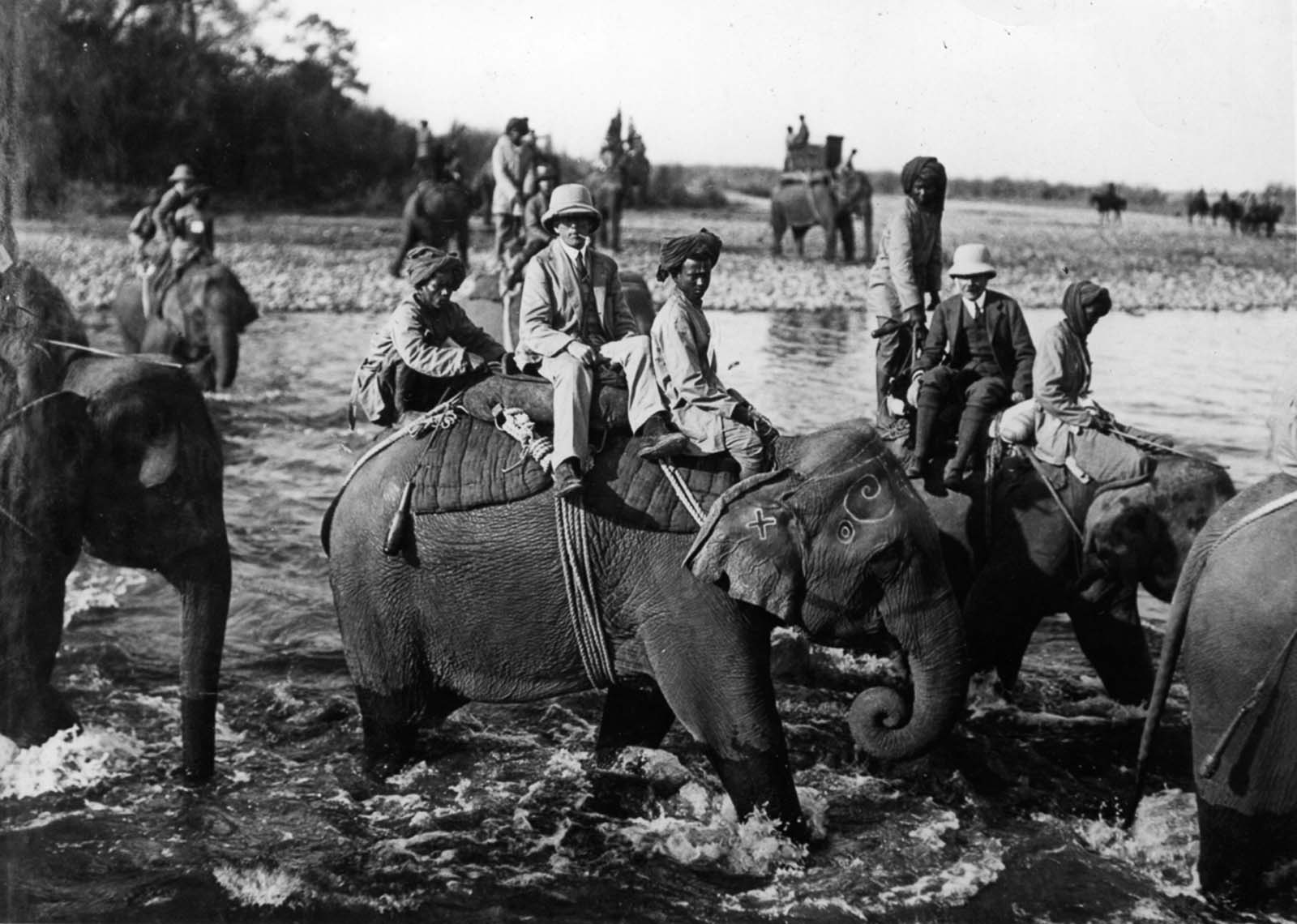 The hunting party crosses a river. 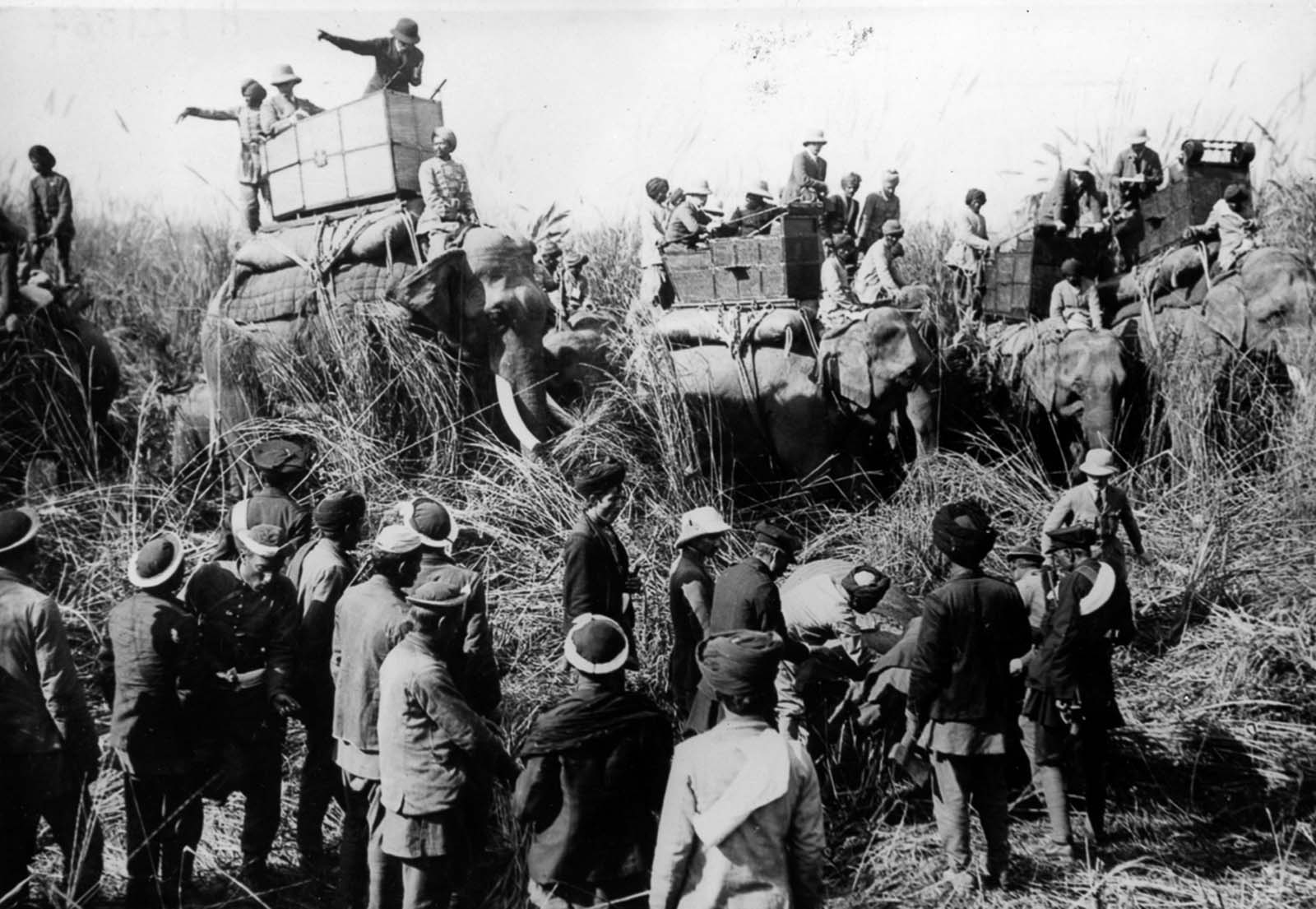 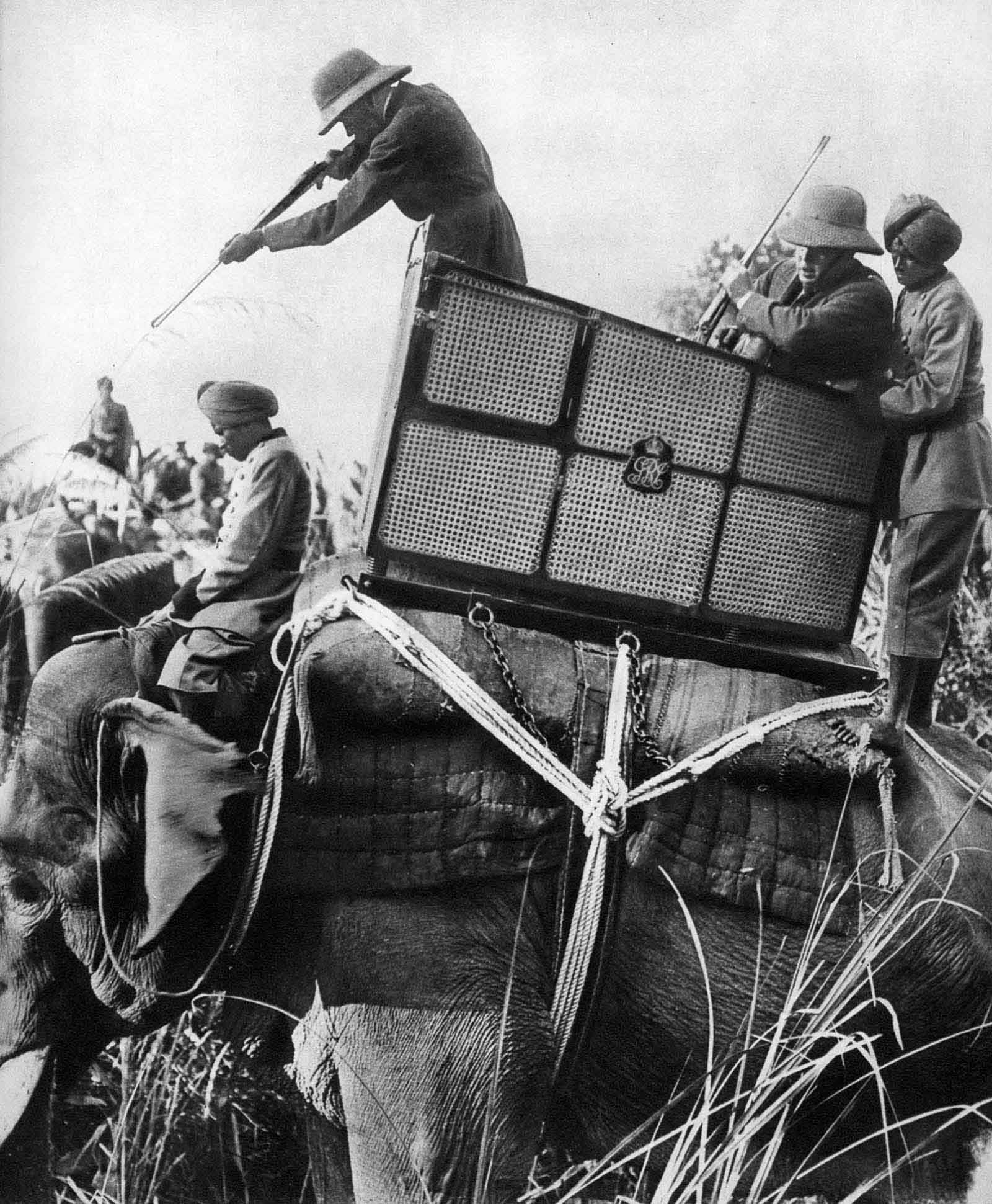 The king finishes off a wounded tiger. 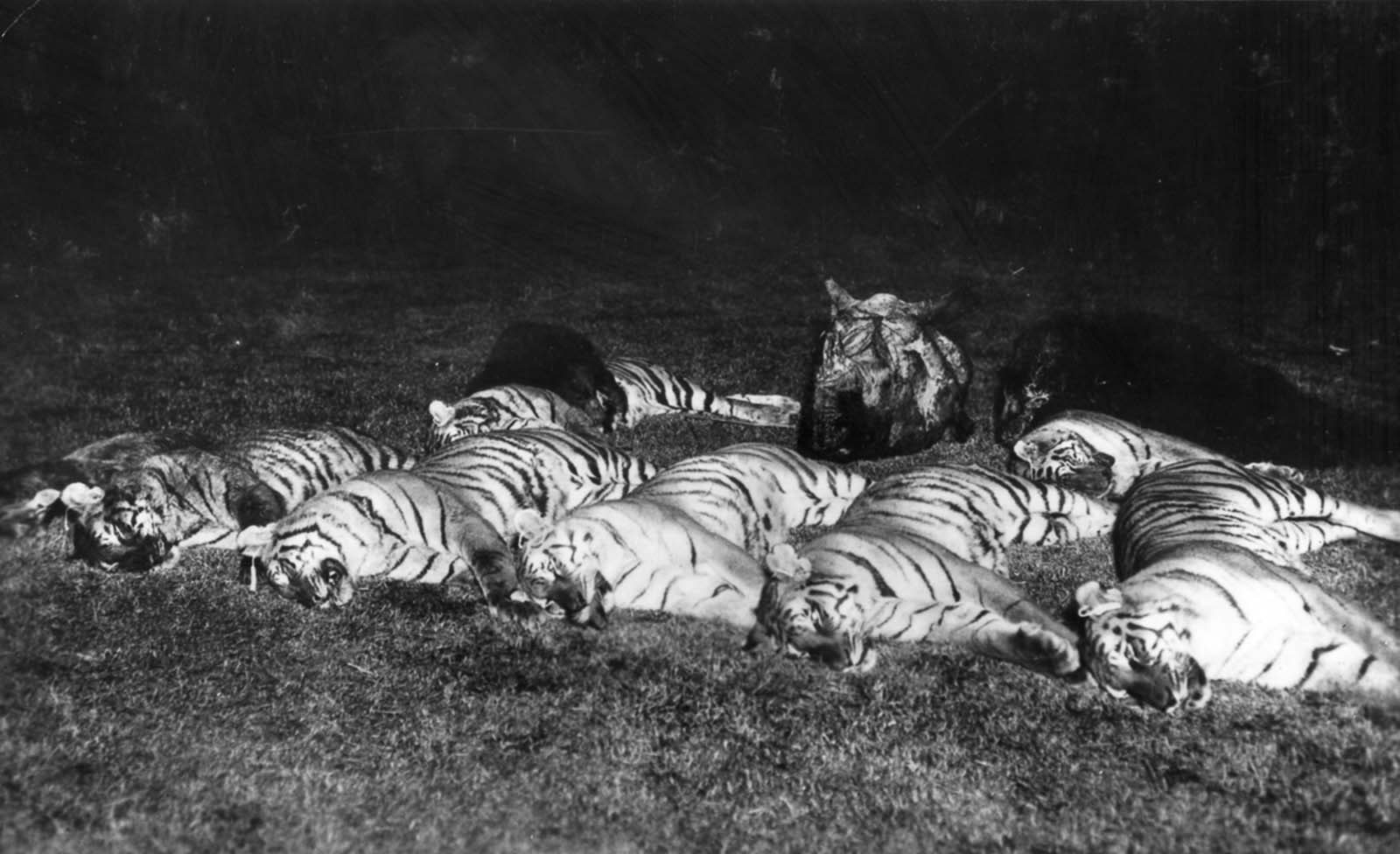 Dead tigers, bears and a rhinoceros are laid out after the hunt. 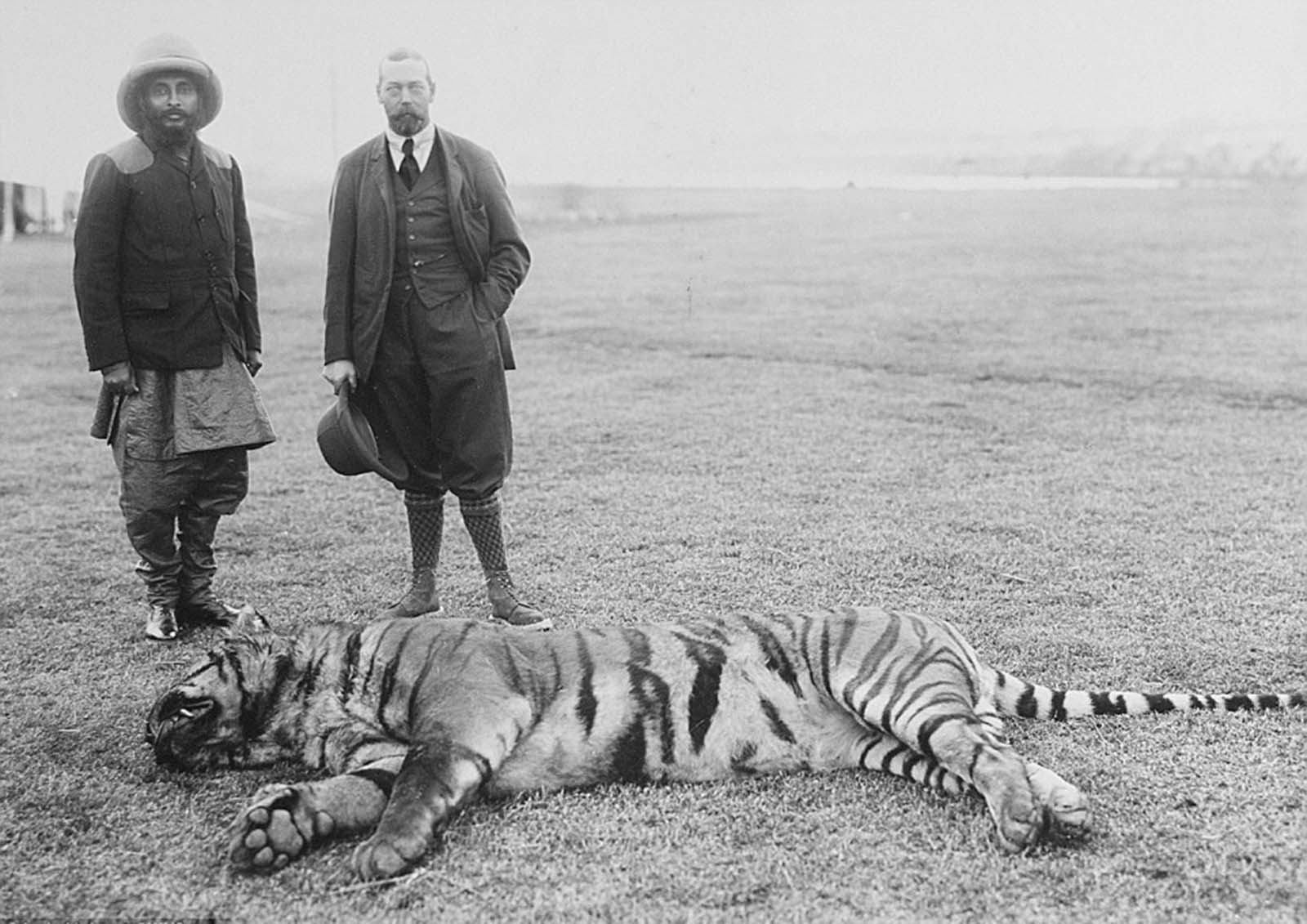 The king poses next to a huge Bengal tiger he shot. 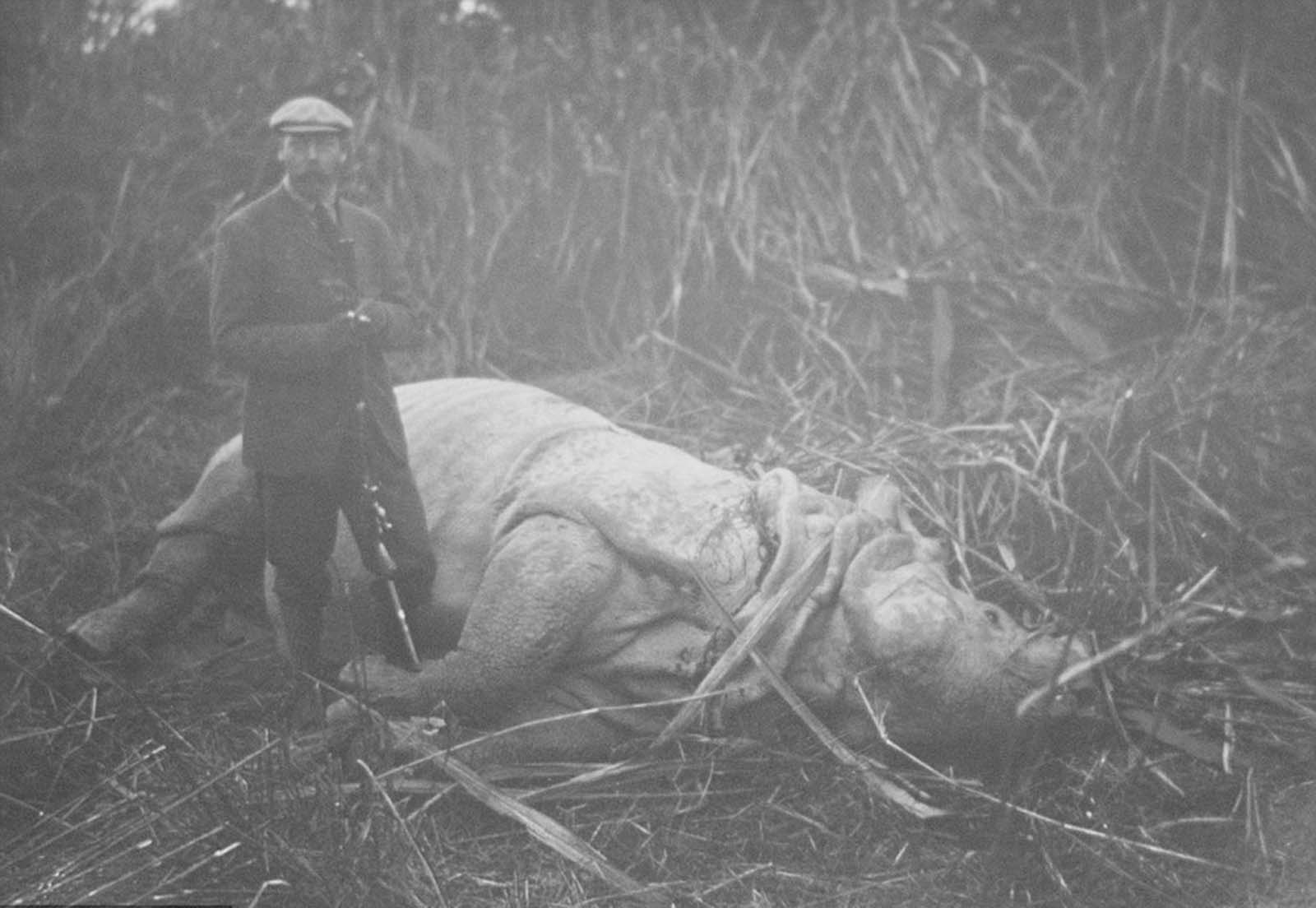 The King’s hunting party killed 60 rhinos and tigers on a ten-day hunting expedition. 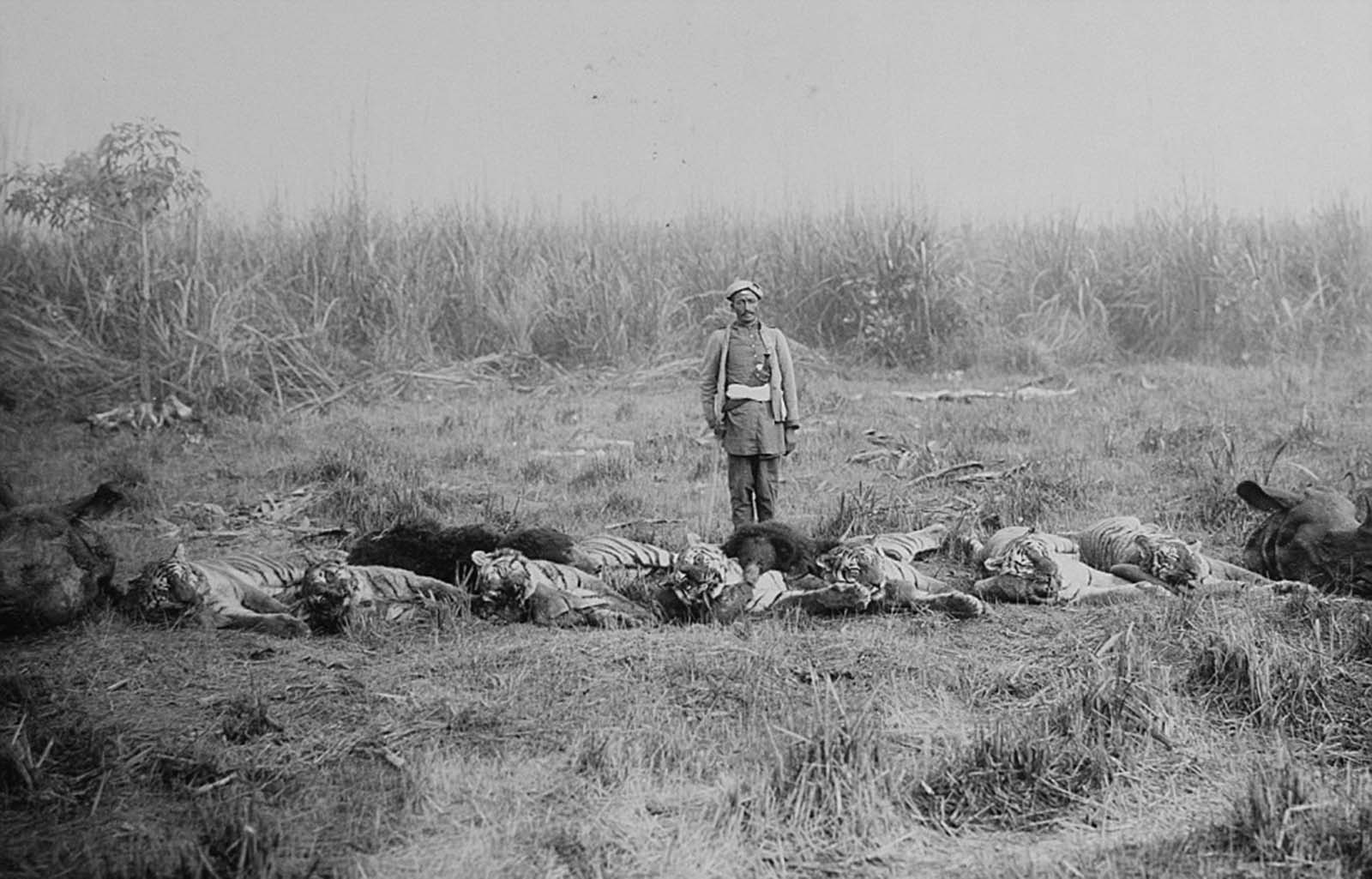 Another photograph shows a servant standing beside a ‘bag’ of seven tigers, two rhino, and two bears. 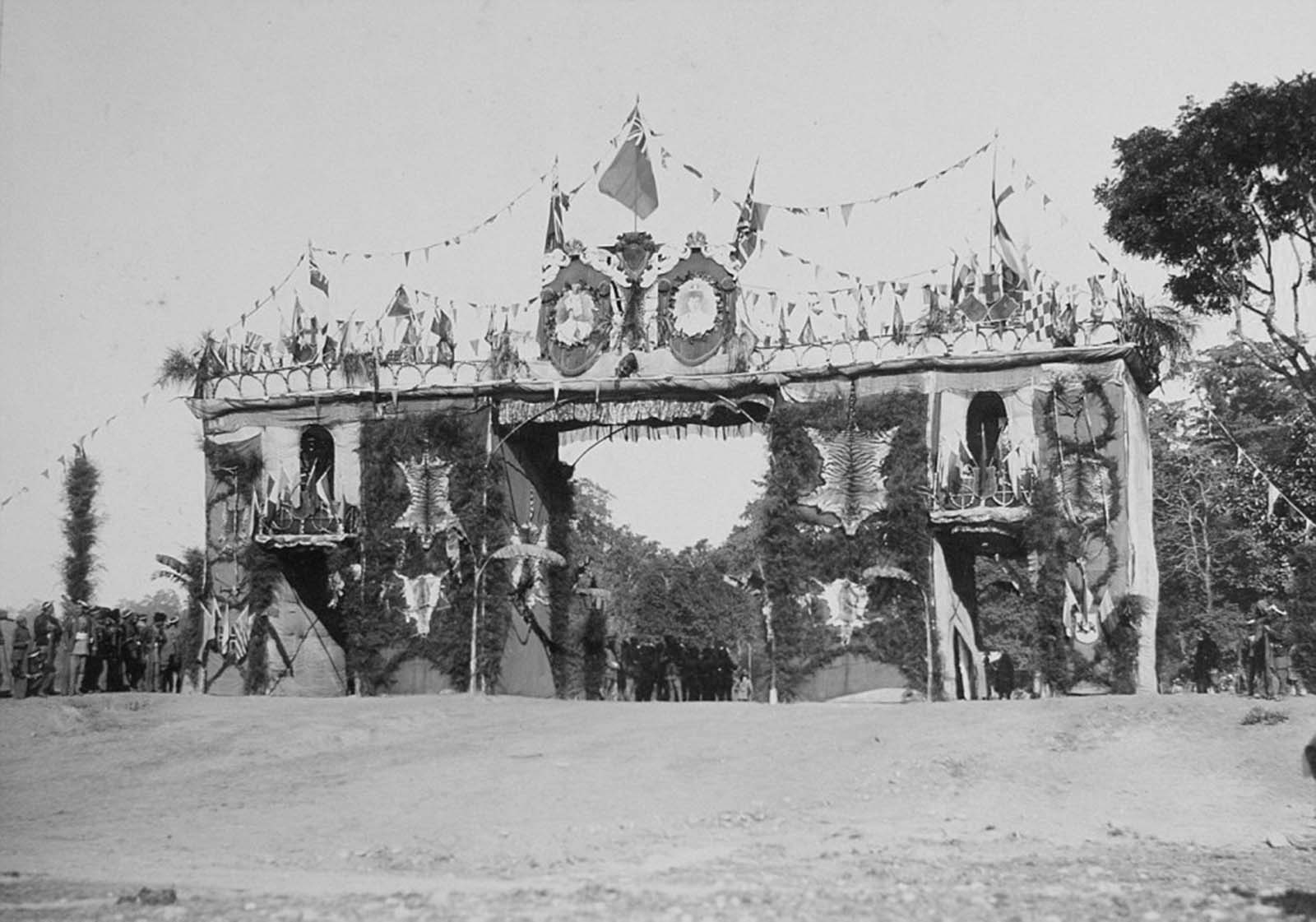 This was the hunting lodge, covered in tiger skins and trophies from their kills in Nepal, where they met important people from the local area. 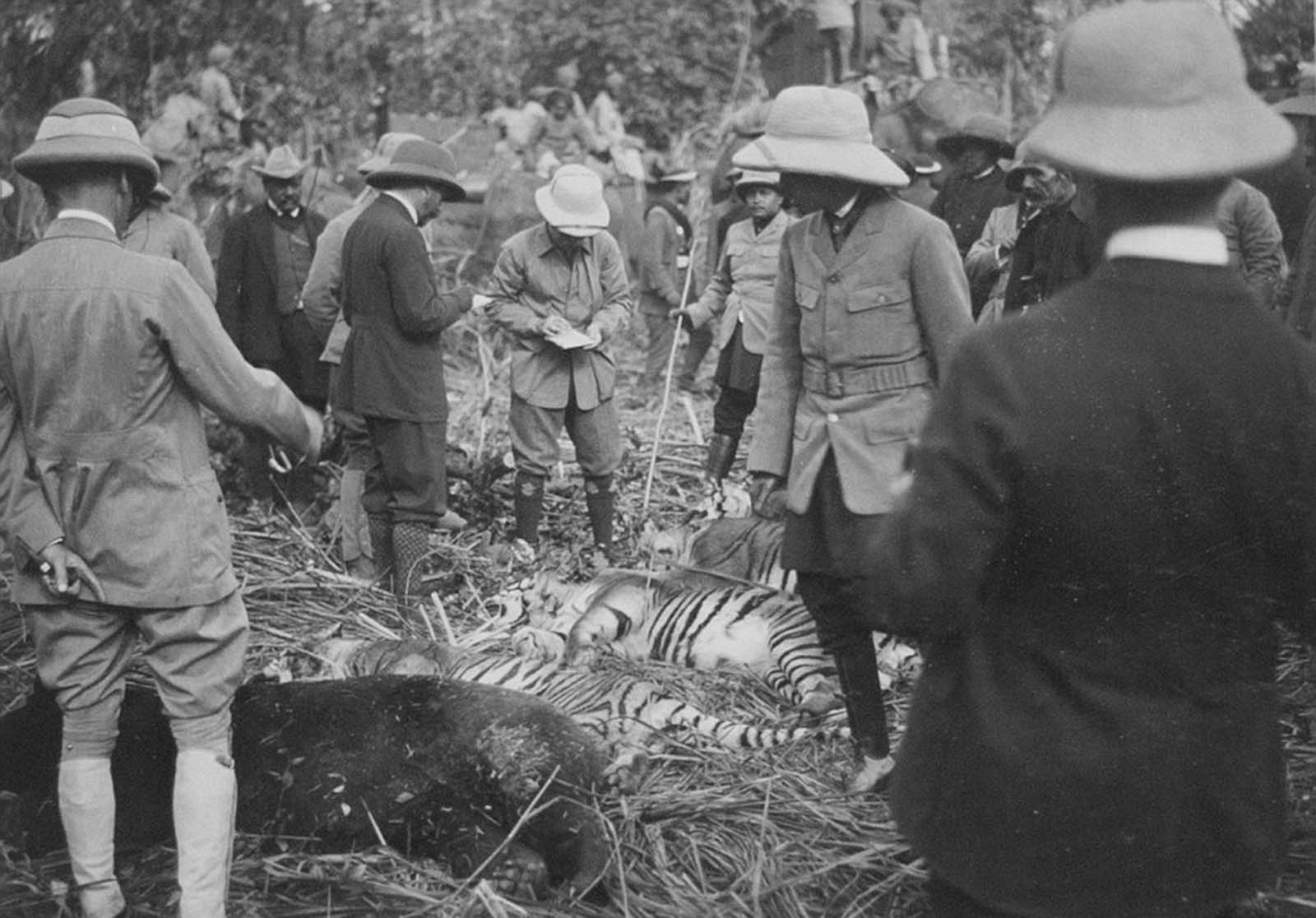 The Maharaja spent months preparing for the King’s visit, cutting roads for miles through the jungle. 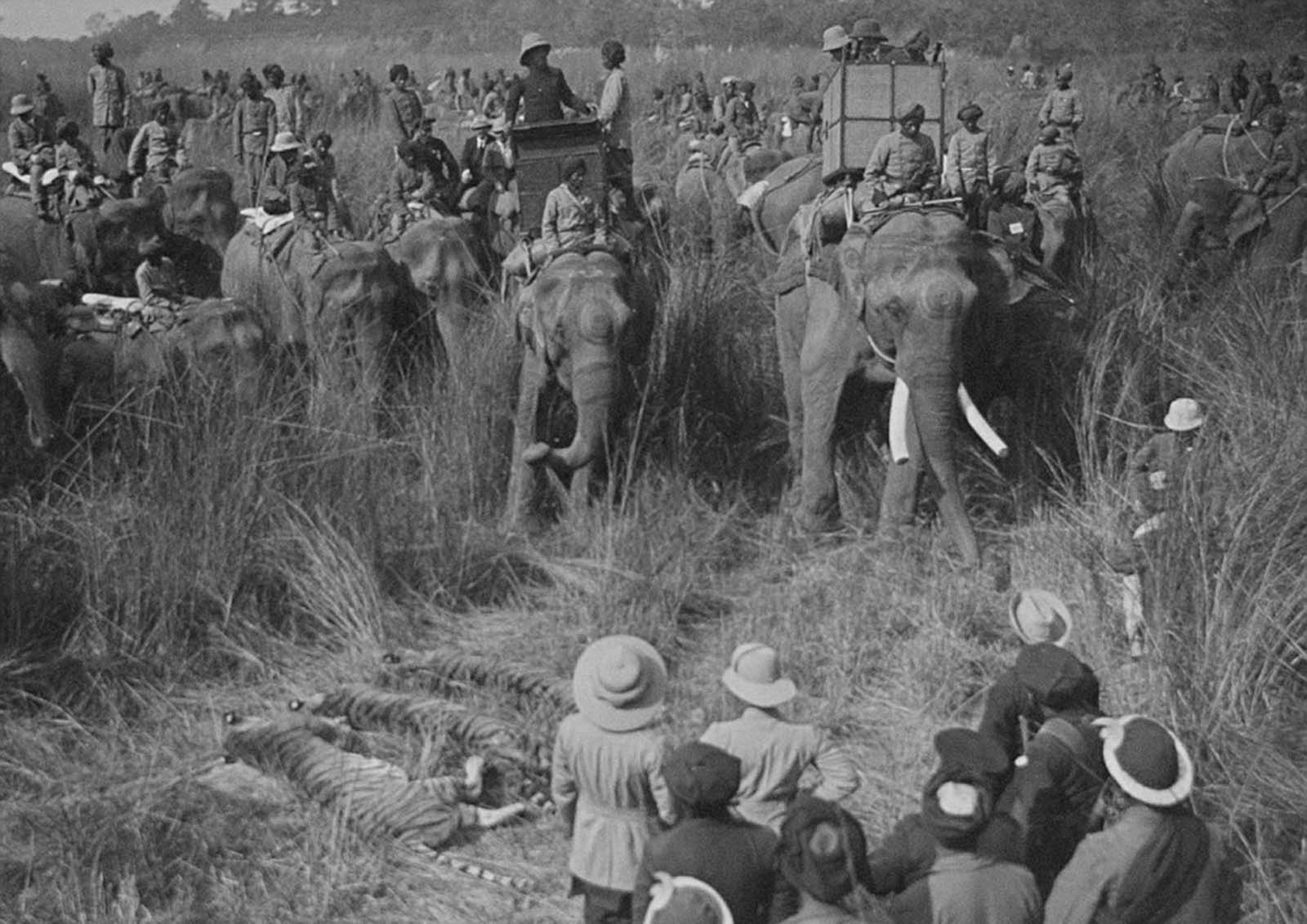 The Maharaja had 645 elephants ready for the hunting expedition. 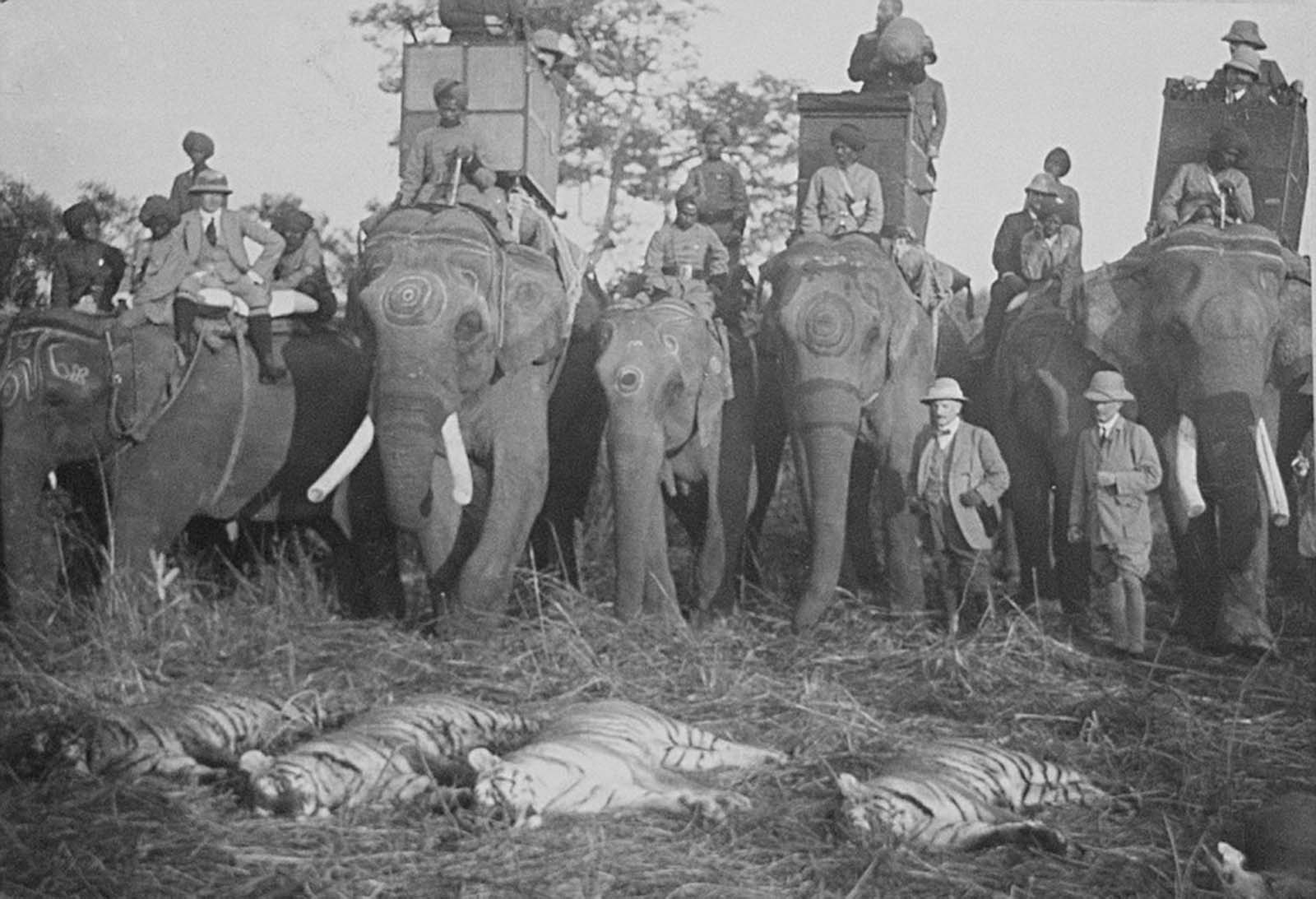 Records from the time tell how the King shot one tiger, wounding it badly, before a second tiger was killed by the King with a ‘snap-shot through the neck as if he had been a rabbit’. 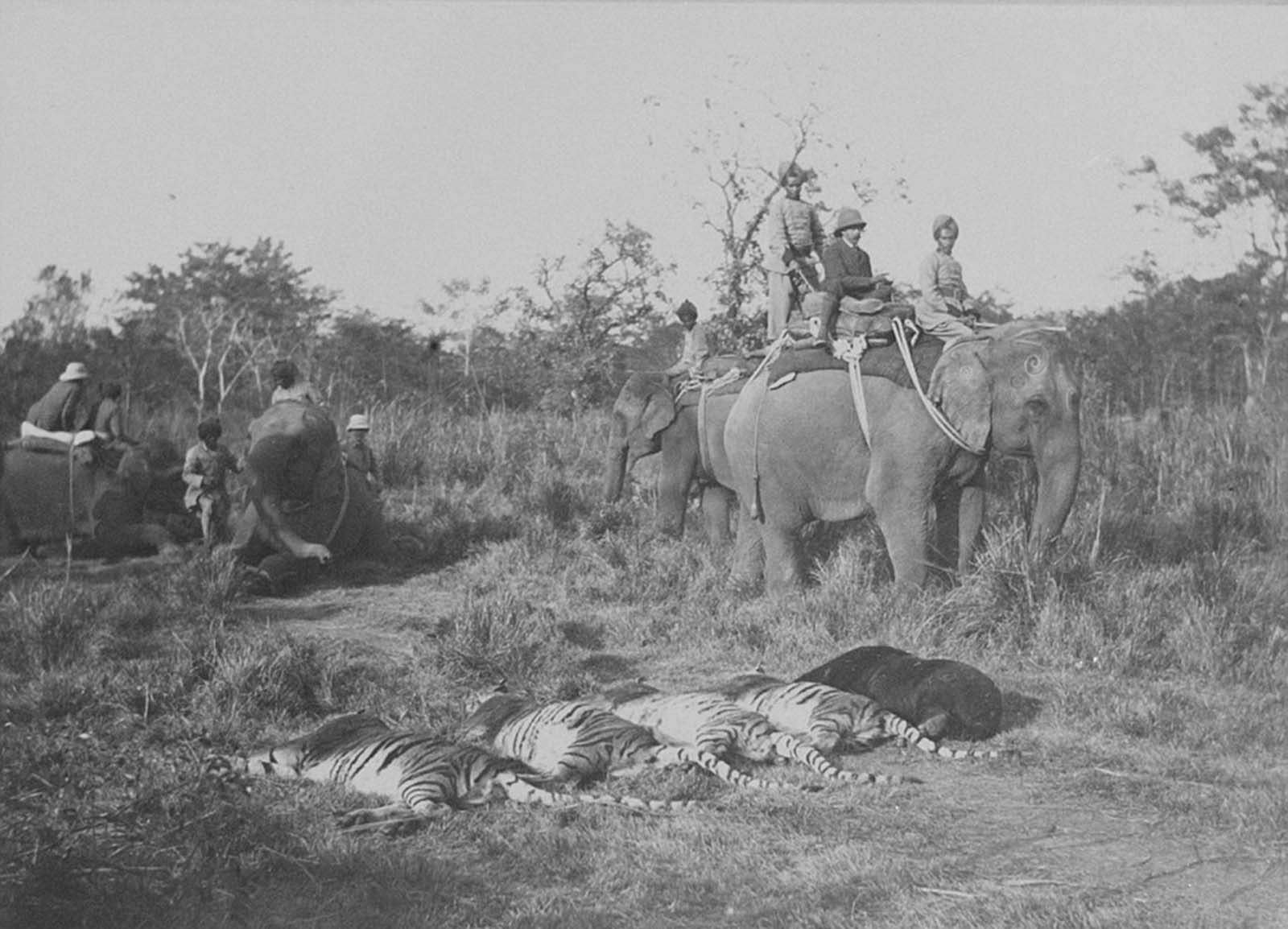 As they advanced on the back of elephants, ‘the wounded tiger was presently found and despatched by His Majesty’, records say.