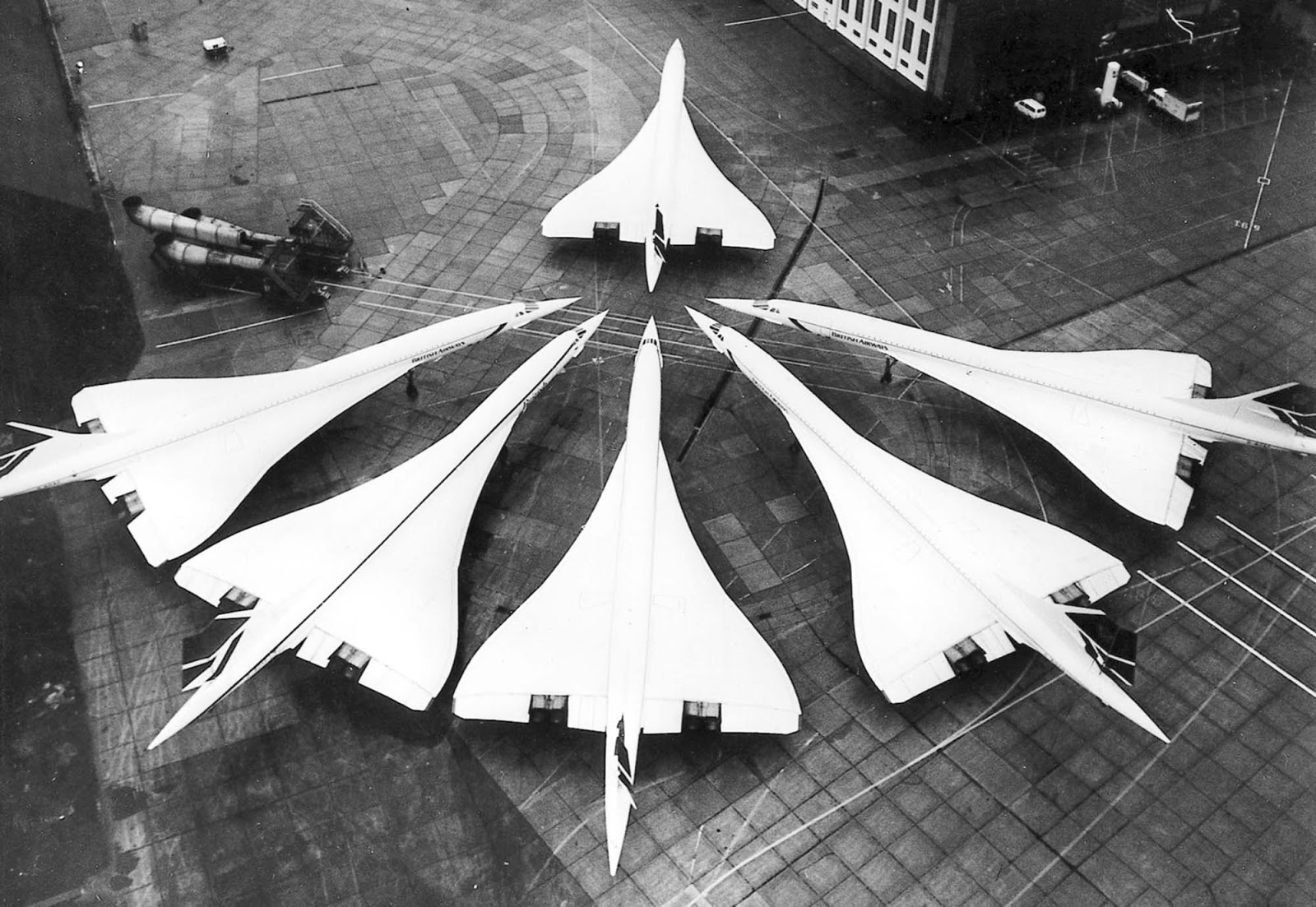 First flown in 1969, Concorde entered service in 1976 and continued commercially for 27 years. With a cruising speed of 1,350 mph (2,180 km/h at cruise altitude), its unmistakable roar, and sleek, sexy lines the Concorde became an icon of aviation history.

For those wealthy enough to afford the expensive round-trip ticket, a journey aboard Concorde was the closest they might get to flying on a rocket.

Concorde was jointly developed and manufactured by Aérospatiale and the British Aircraft Corporation (BAC) under an Anglo-French treaty.

Concorde’s name, meaning harmony or union, reflects the co-operation on the project between the United Kingdom and France. Twenty aircraft were built including six prototypes and development aircraft. Air France (AF) and British Airways (BA) each received seven aircraft.

The Concorde faced problems beyond high costs. Any aircraft traveling faster than the speed of sound creates what’s aptly called a “sonic boom”.

To avoid this problem, the Concorde was limited to subsonic speeds while flying over land. That meant it could only exercise its prime advantage over other aircraft while traveling on trans-oceanic routes.

On 10 April 2003, Air France and British Airways simultaneously announced that they would retire Concorde later that year. They cited low passenger numbers following the 25 July 2000 crash, the slump in air travel following the September 11 attacks, and rising maintenance costs.

Although Concorde was technologically advanced when introduced in the 1970s, 30 years later, its analog cockpit was outdated. There had been little commercial pressure to upgrade the Concorde due to a lack of competing aircraft, unlike other airliners of the same era such as the Boeing 747.

By its retirement, it was the last aircraft in the British Airways fleet that had a flight engineer; other aircraft, such as the modernized 747-400, had eliminated the role.

Due to the intense heat of the airframe, Concorde could stretch anywhere from six to 10 inches (15 to 25 cm) during flight. Every surface, even the windows, was warm to the touch by the end of the flight.

Concorde still holds the record for the fastest crossing of the Atlantic by a civil aircraft. The quickest Concorde flight from New York to London, on February 7, 1996, took just two hours, 52 minutes and 59 seconds.

Concorde’s drooping nose, developed by Marshall Aerospace, enabled the aircraft to switch between being streamlined to reduce drag and achieve optimum aerodynamic efficiency, and not obstructing the pilot’s view during taxi, take-off, and landing operations.

Due to the high angle of attack, the long pointed nose obstructed the view and necessitated the capability to droop. The droop nose was accompanied by a moving visor that retracted into the nose prior to being lowered. When the nose was raised to horizontal, the visor would rise in front of the cockpit windscreen for aerodynamic streamlining.

The only supersonic airliner in direct competition with Concorde was the Soviet Tupolev Tu-144, nicknamed “Concordski” by Western European journalists for its outward similarity to Concorde.

It had been alleged that Soviet espionage efforts had resulted in the theft of Concorde blueprints, ostensibly to assist in the design of the Tu-144. As a result of a rushed development programme, the first Tu-144 prototype was substantially different from the preproduction machines, but both were cruder than Concorde.

The Tu-144S had a significantly shorter range than Concorde, due to its low-bypass turbofan engines. The aircraft had poor control at low speeds because of a simpler supersonic wing design; in addition, the Tu-144 required braking parachutes to land while Concorde used anti-lock brakes. The Tu-144 had two crashes, one at the 1973 Paris Air Show, and another during a pre-delivery test flight in May 1978.