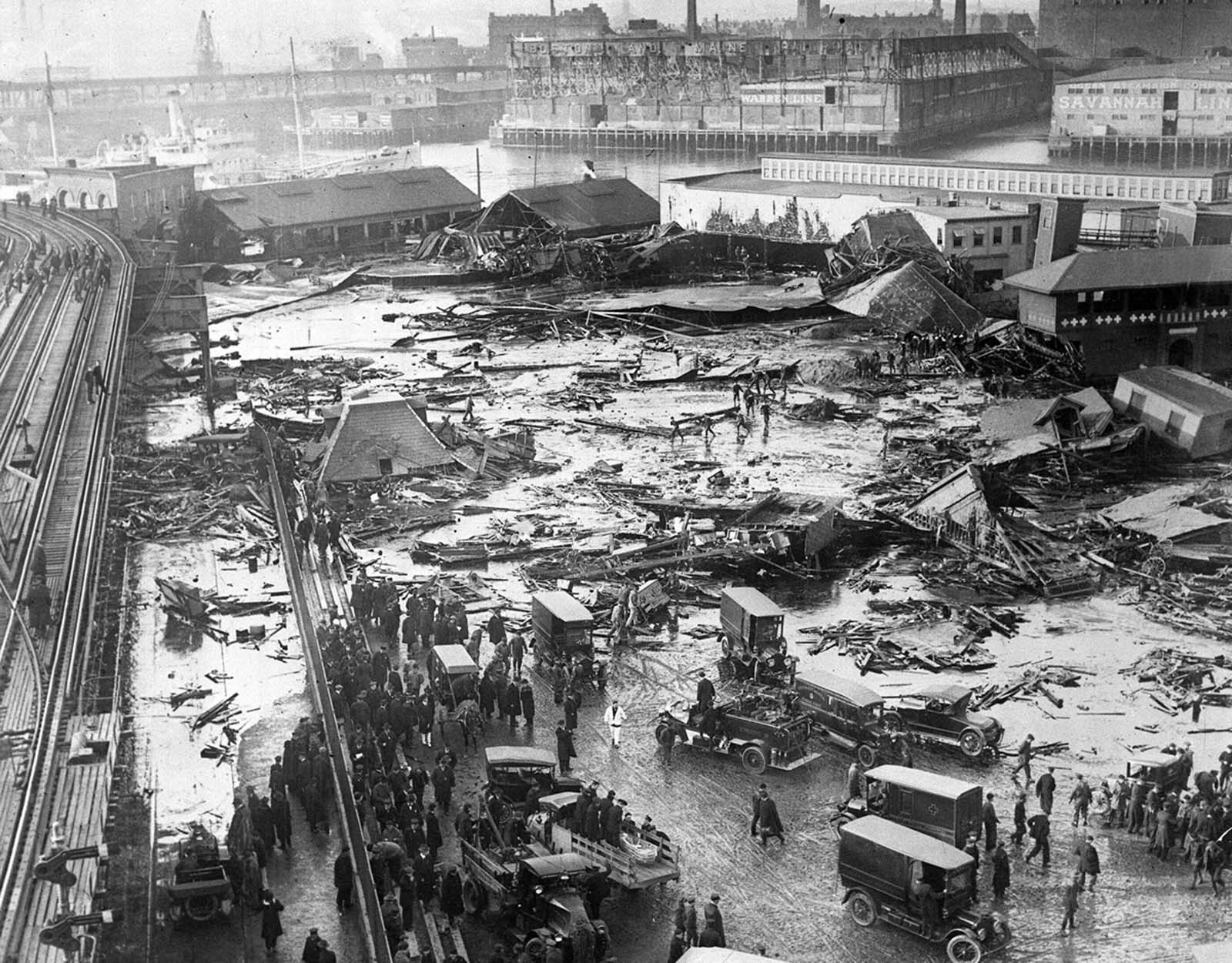 This aerial view shows the site of the molasses storage tank explosion in the section of Commercial St. between Copps Hill and the playground of North End Park in Boston, Massachusetts, on January 15, 1919. The explosion of the steel vat, ninety feet in diameter and fifty-two feet in height, caused 2.3 million gallons of molasses to flood the area, killing 21 people and injuring 150. In the background is the Navy Yard in Charlestown.

On January 15th, 1919, in what was probably the most bizarre disaster in United States’ history, a storage tank burst on Boston’s waterfront releasing two million gallons of molasses in a 15 ft-high, 160 ft-wide waves that raced through the city’s north end at 35mph destroying everything it touched.

The wave killed young Pasquale Iantosca, smashing a railroad car into the ten-year-old. It pinned Walter Merrithew, a railroad clerk on the Commercial Street wharf, against the wall of a freight shed, his feet 3 ft off the floor. He hung there as he watched a horse drowning nearby.

The wave broke steel girders of the Boston Elevated Railway, almost swept a train off its tracks, knocked buildings off their foundations, and toppled electrical poles, the wires hissing and sparking as they fell into the brown flood. The Boston Globe reported that people ‘were picked up and hurled many feet.

Rivets popping from the tank scourged the neighborhood like machine gun bullets, and a small boat was found slammed through a wooden fence like an artillery shell. By the time it passed, the wave had killed 21 people, injured 150, and caused damage worth $100 million in today’s money. All caused by molasses.

At the time, molasses was a standard sweetener in the United States, used in cooking and in fermentation to make ethanol, which in turn could be made into a liquor used as an ingredient in munitions manufacture, an aspect of the business that had been booming during the First World War. 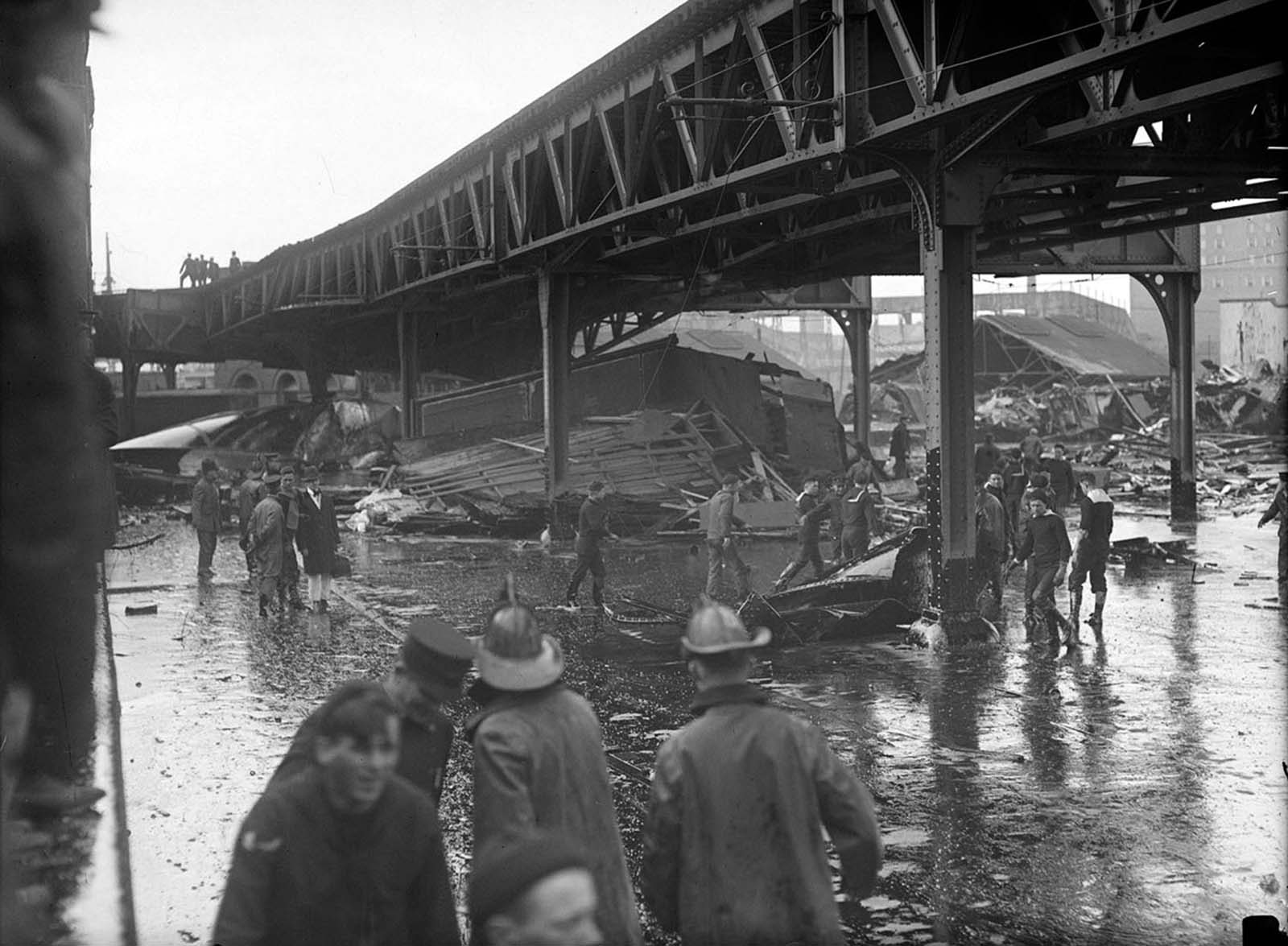 Firefighters and others stand in a pool of molasses after the explosion of a molasses storage tank owned by the United States Industrial Alcohol Company in Boston on January 15, 1919. About 2.3 million gallons of molasses flooded the area, killing 21 people, injuring 150, trapping a dozen horses, and destroying buildings, homes and part of the elevated train.

First on the scene were 116 sailors from the lightship USS Nantucket that was docked nearby. They were soon joined by Boston police, Red Cross workers and army personnel.

When Suffolk County medical examiner George Magrath arrived, several bodies had already been pulled from the molasses. He said they looked ‘as though covered in heavy oil skins … eyes and ears, mouths and noses filled’.

A makeshift hospital was set up at Haymarket Relief Station about half a mile from the waterfront, and volunteers removed molasses from victims’ noses and mouths so they could breathe.

Those already on duty were soon covered from head to foot with brown syrup and blood,’ the Boston Post reported. ‘The whole hospital reeked of molasses. It was on the floors, on the walls, the nurses were covered with it, even in their hair.’ At the destroyed city stables, police shot injured horses trapped in the molasses.

The clean-up eventually took some 87,000 man-hours. Fire department pumps groaned as they removed thousands of gallons of molasses from cellars. Workers used chisels, brooms and saws to break up the hardening gunk. The harbor water, used to flush the streets clean, was brown until the summer.

Meanwhile, rescue workers, sightseers, and residents carried the gooey brown residue on their clothes and boots to other parts of the city, making streetcar seats, trolley platforms, and public phones sticky. The whole city smelled of molasses.

In February, a month after the disaster, the Chief Judge of Boston Municipal Court, Wilfred Bolster, made public the results of his investigation into the tragedy and blamed the tank itself, saying evidence indicated it was ‘wholly insufficient in point of structural strength to handle its load’. He also held USIA to be guilty of manslaughter. 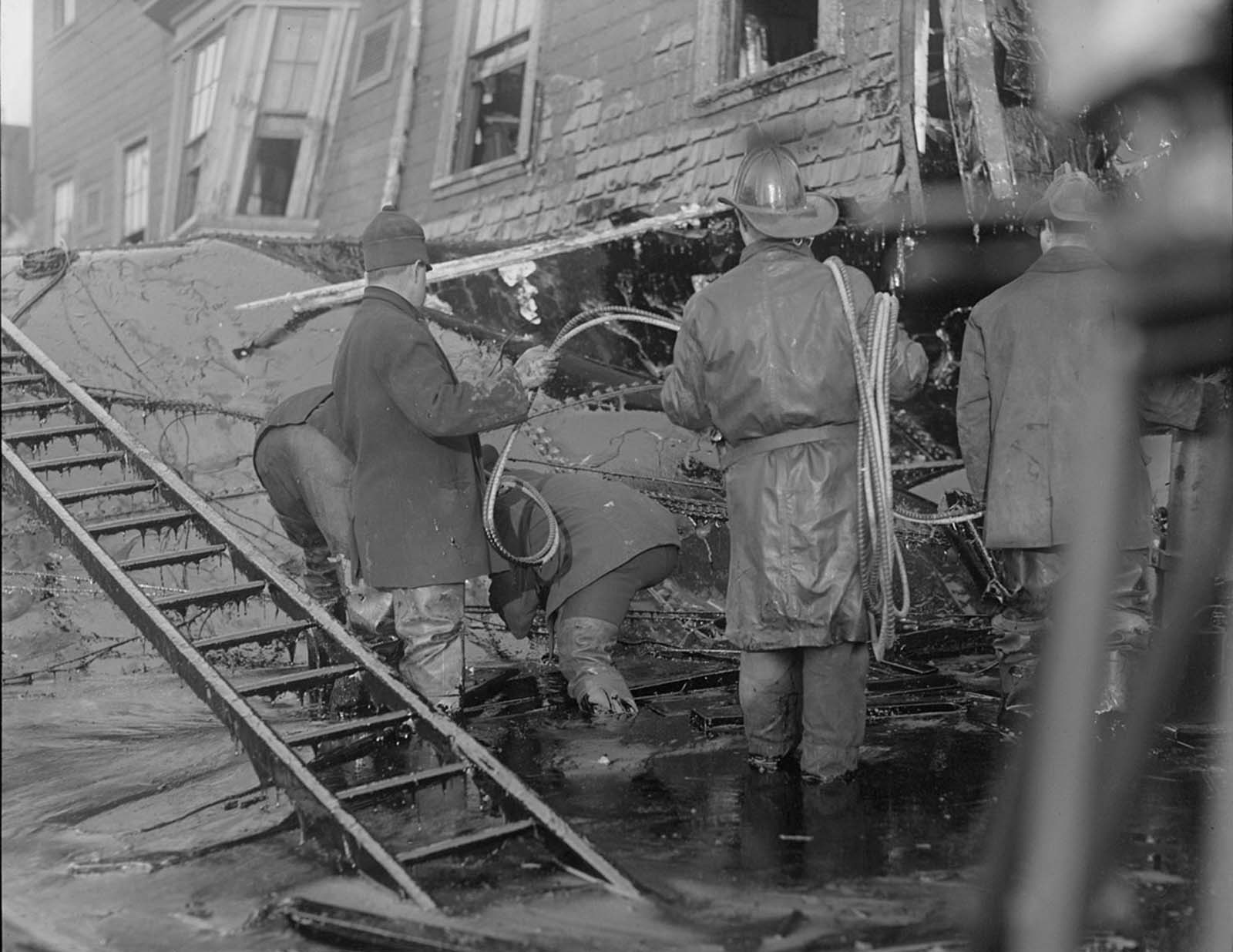 Firemen standing in thick molasses after the disaster. Muck drips off the ladder’s rungs.

District Attorney Joseph Pellatier then presented evidence to a grand jury, which decided the tank had been built without a sufficient inspection of its plans and construction by the city. But the jury stopped short of charging the company with manslaughter.

As a result of the tragedy, Boston city authorities began requiring that plans for all construction projects be signed off by an engineer or architect and filed with the city’s building department, a practice that soon spread throughout America.

The tank was never rebuilt. The site where it stood is now a public park with bocce (Italian boules) courts and Little League baseball fields, slides, and swings.

All that remains of that terrible day 90 years ago is a small plaque at the entrance of the recreational complex. Yet local residents insist a faint smell lingers to this day. They say that on warm summer days the air is still tinged with the sweet, cloying scent of molasses. 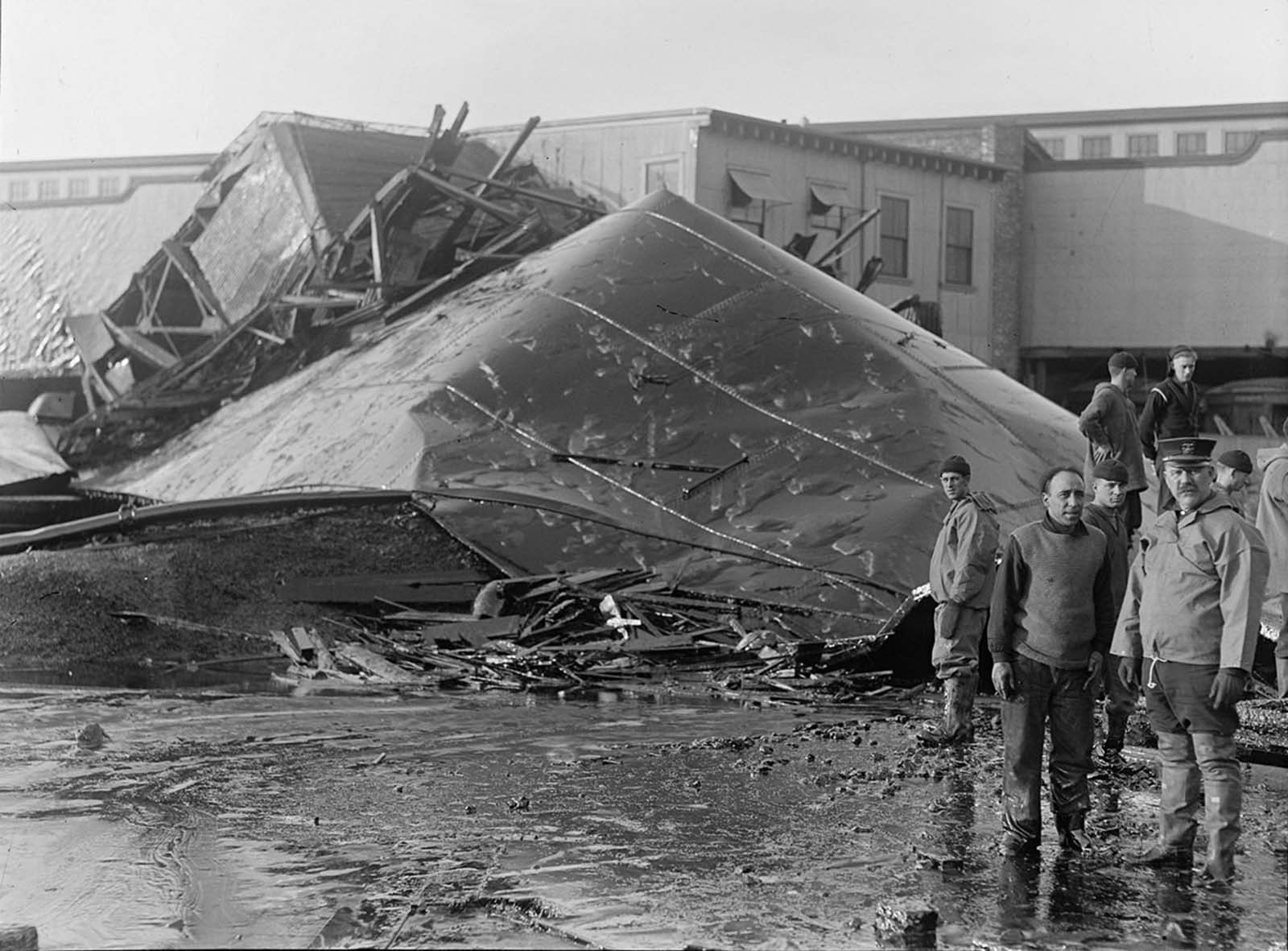 Section of tank after Molasses Disaster explosion at 1 p.m. on January 15, 1919. 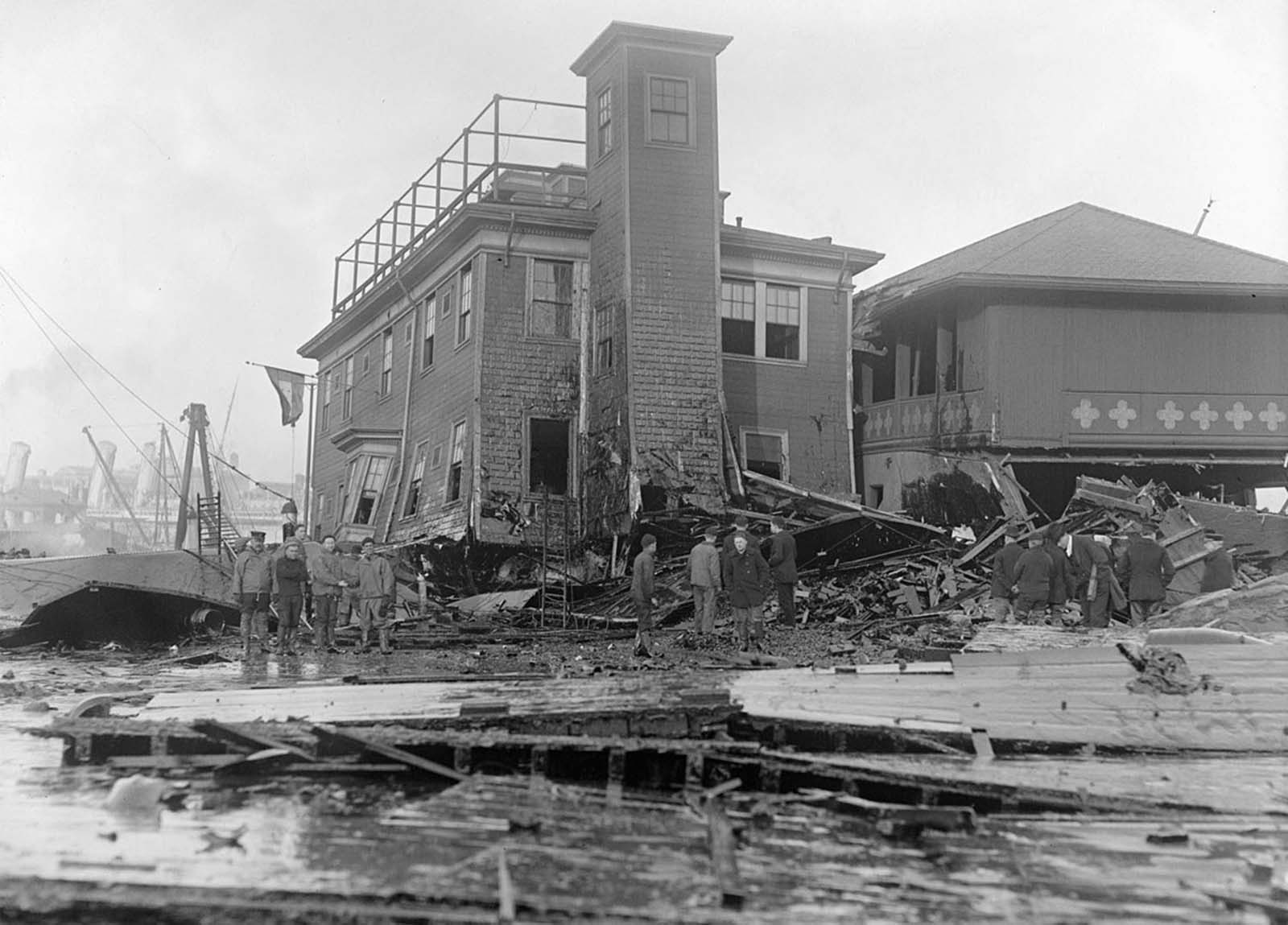 Fire House no. 31, damaged in the Molasses Disaster. 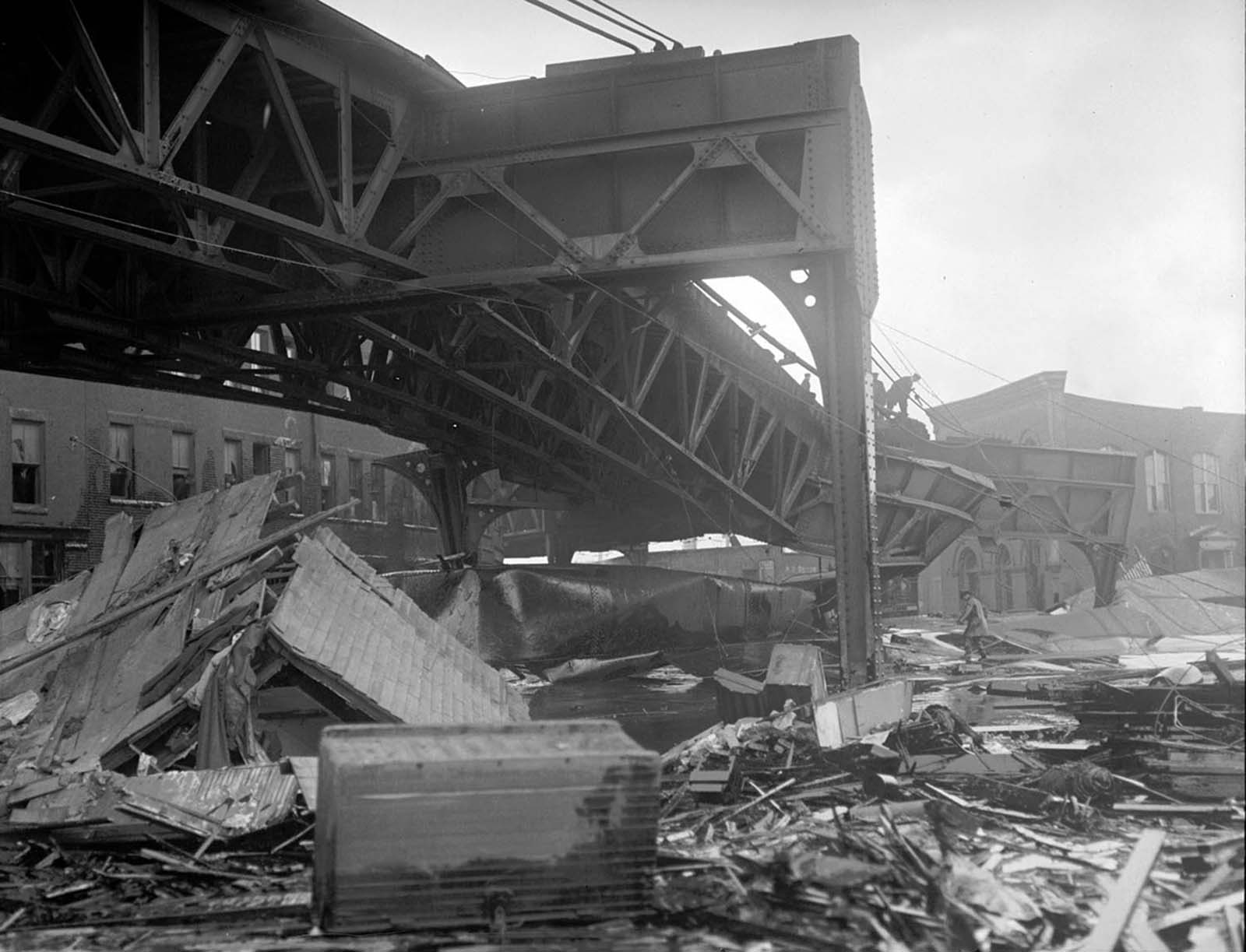 Some of the wreckage caused by the explosion of the molasses storage tank in Boston on January 15, 1919, including damage to the steel support of the elevated train bridge. 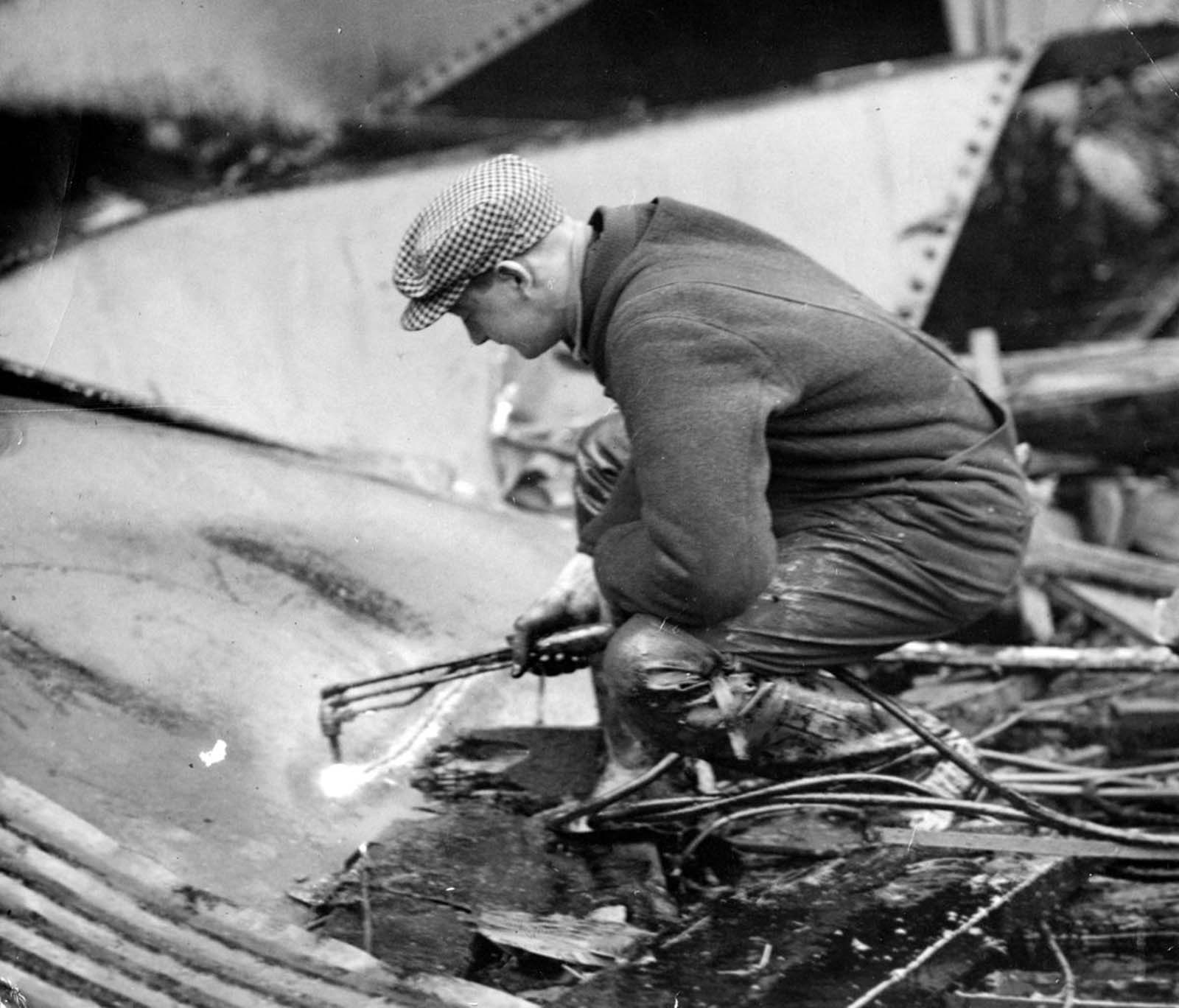 Welders carefully began cutting up the molasses tank with torches in the search for bodies on Jan. 20, 1919, five days after the Great Molasses Flood in Boston’s North End. Even though firemen constantly sprayed water on the twisted wreckage, it wasn’t until the city ordered powerful streams from its fireboat that the molasses began to dissipate. The salt water of the harbor “cut” the molasses and eventually the welders could see the structure of the original tank. 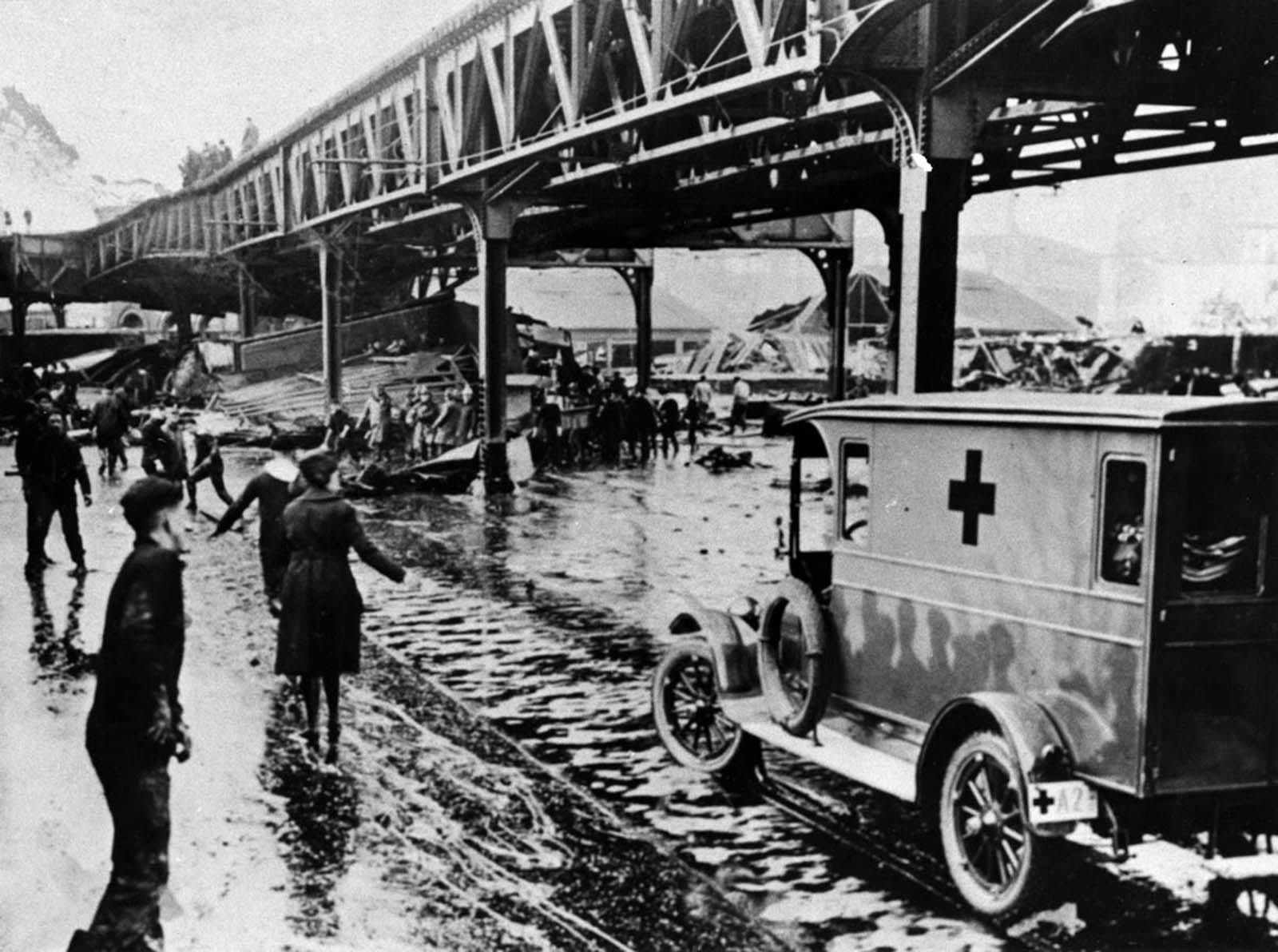 Police, firemen, Red Cross workers, civilian volunteers, and cadets from the USS Nantucket training ship berthed nearby rushed to the scene on Jan. 15, 1919. 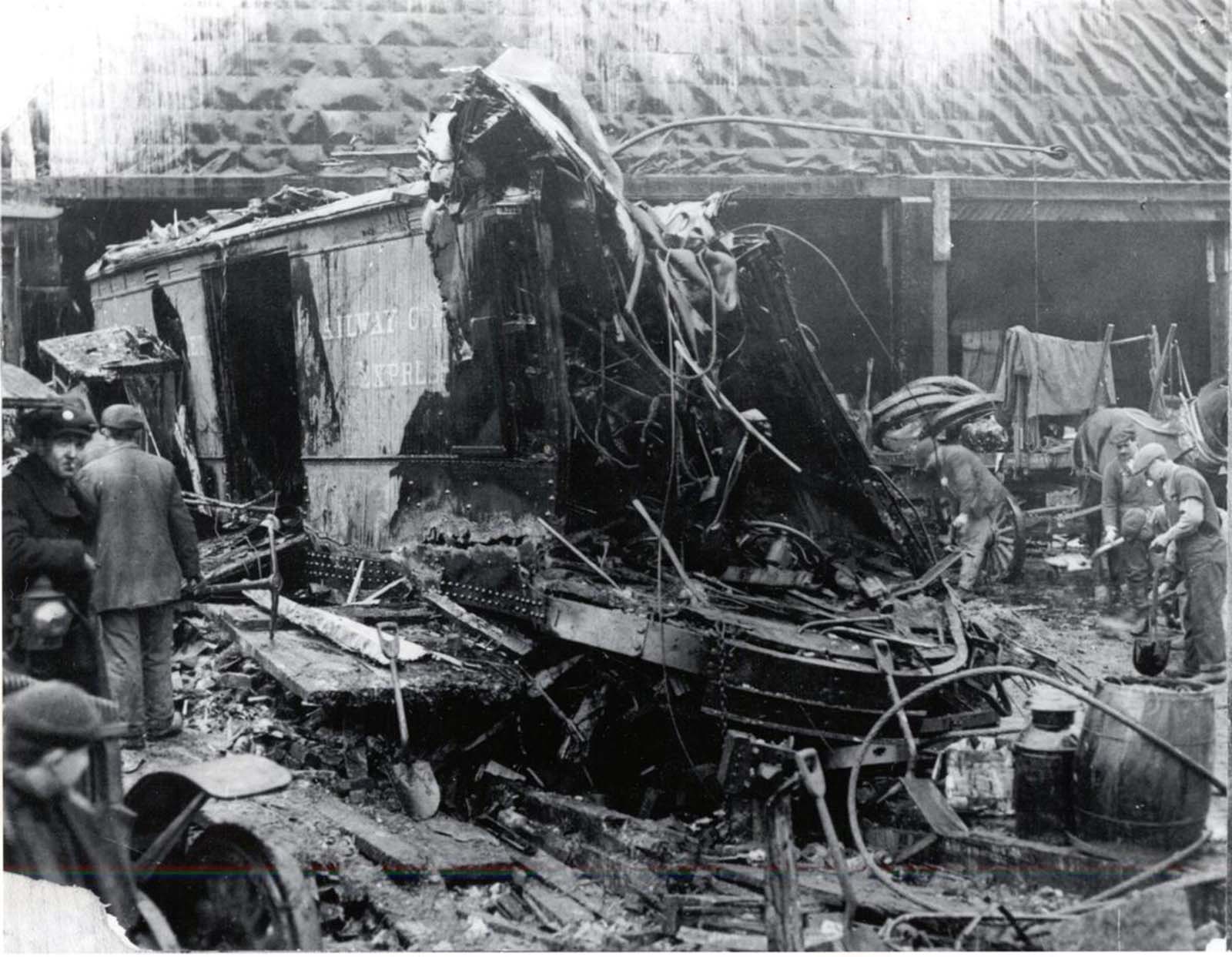 Debris was strewn about the street outside the freight house of the Bay State Street Railway Co. The rising tide of molasses leveled buildings and buckled the steel girders of the elevated railway, overwhelming everything and everyone in its wake. 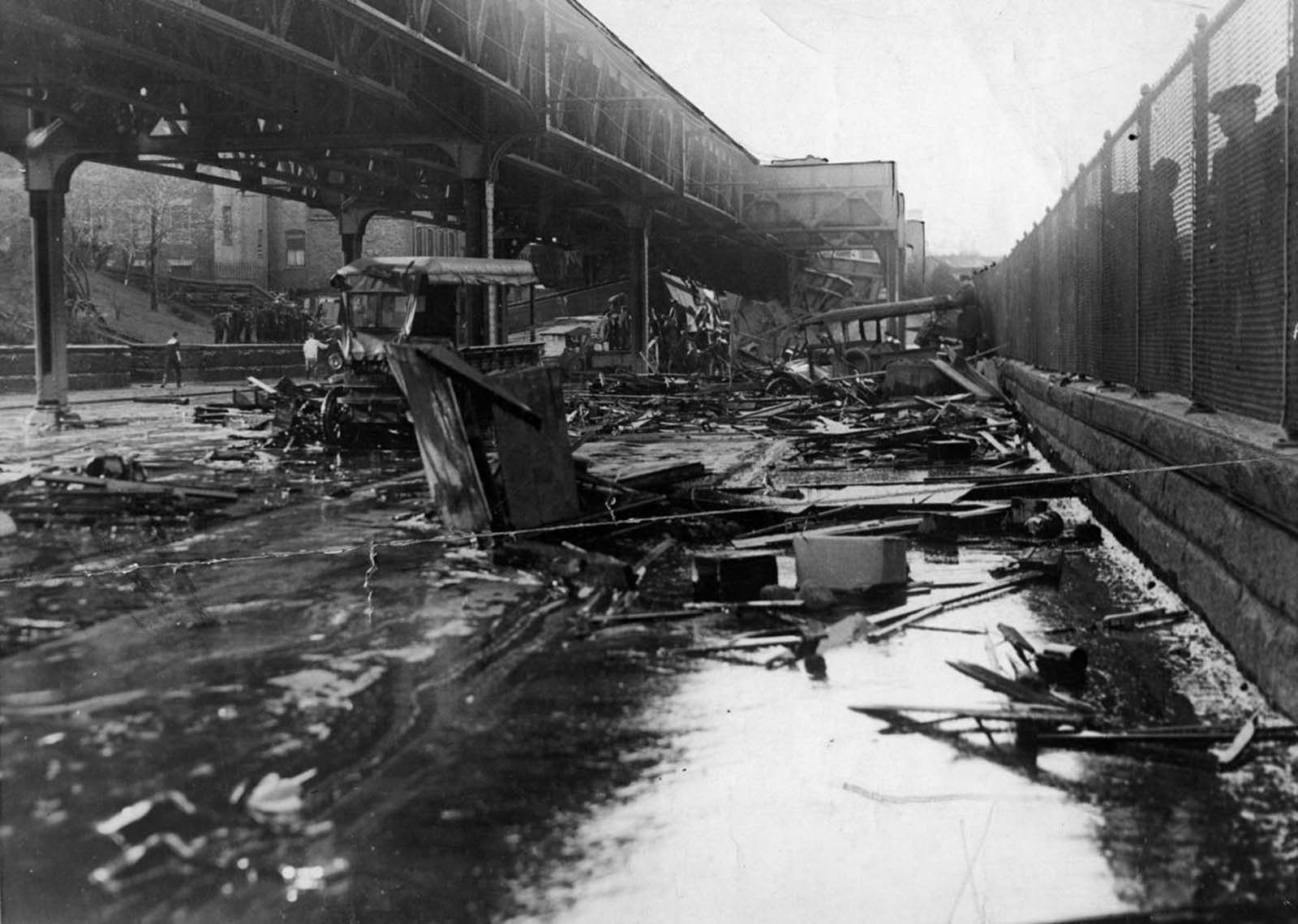 Smashed vehicles and debris sat in a puddle of molasses on Commercial Street, the day after a giant tank in the North End burst. 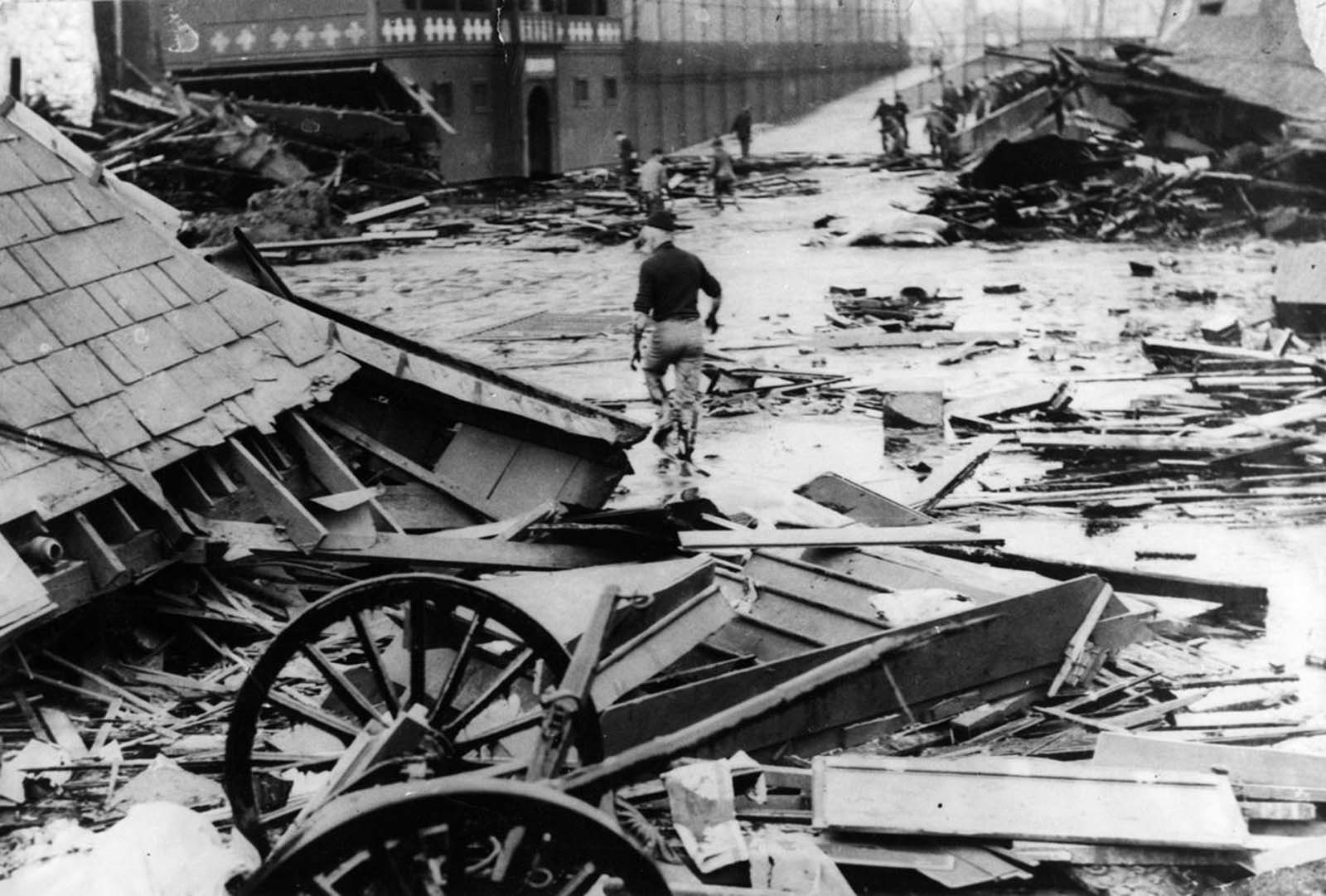 A man walked through the debris a day after the molasses tank suddenly ruptured, unleashing a wave that reached a depth of 15 feet and in places and was 100 yards wide over a two block area. 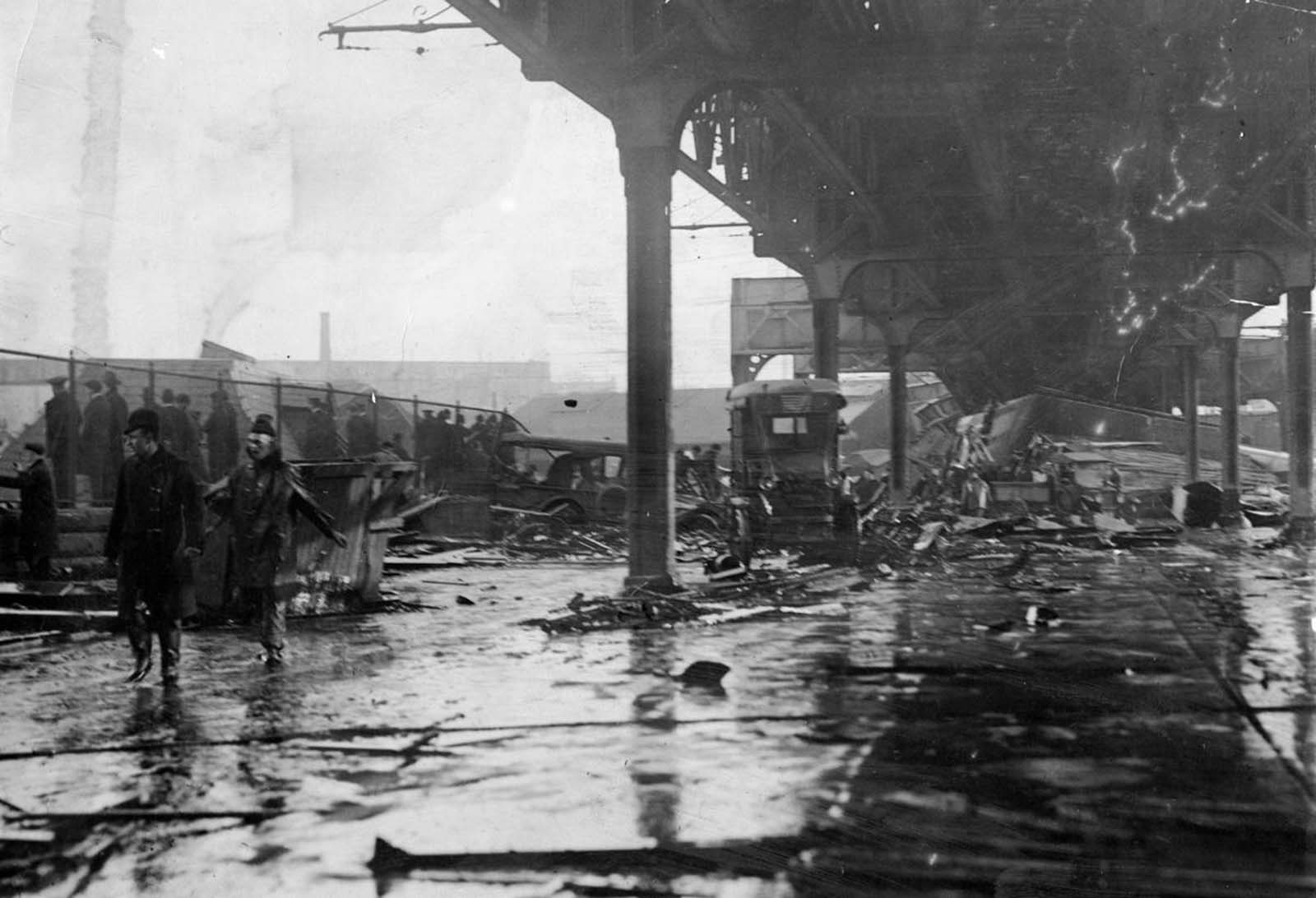 Debris, including smashed vehicles, lined Commercial Street the day of the collapse and flood. When the temperature plunged overnight, the dead became entombed in the hardened sugar. 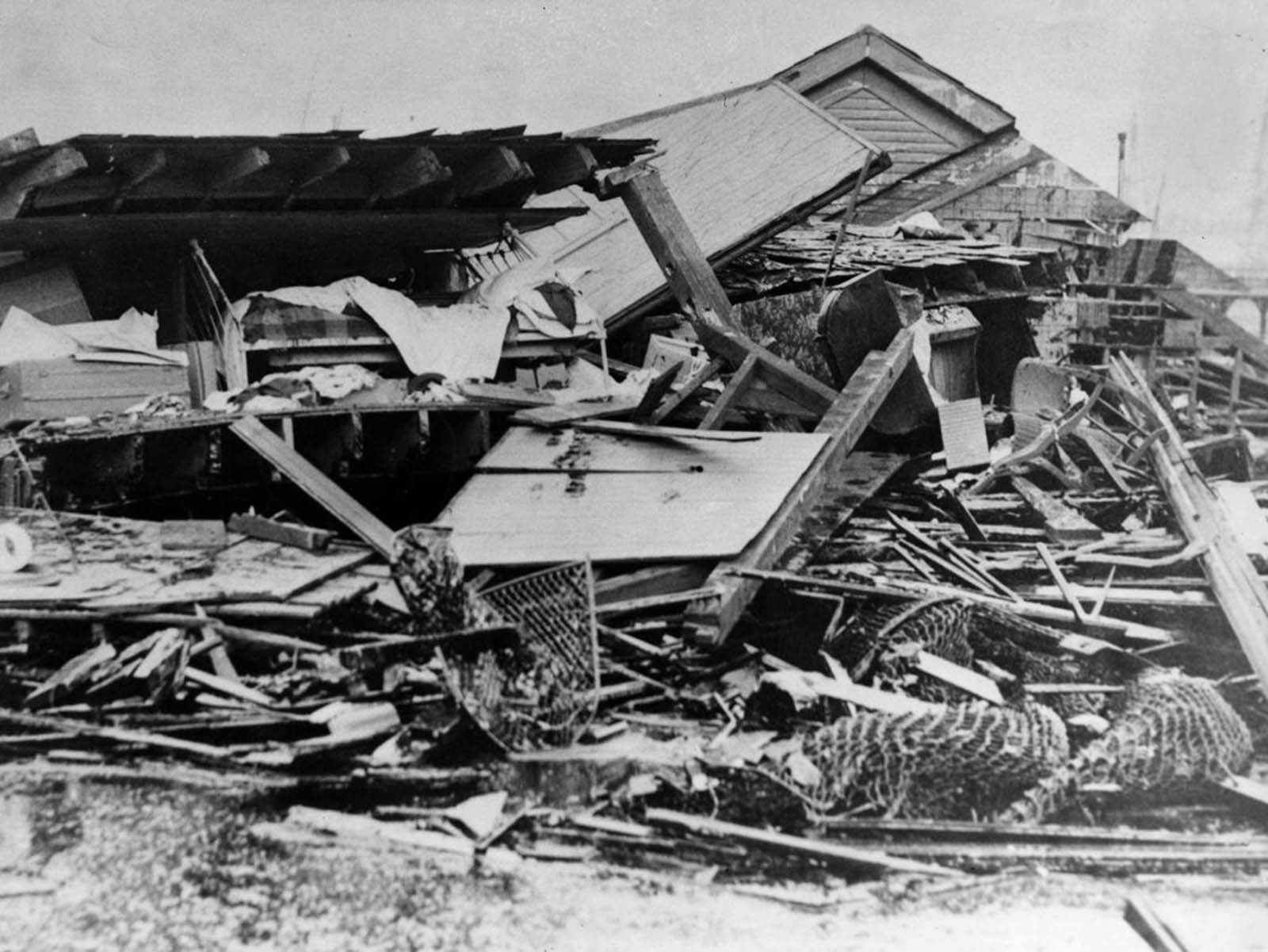 Rubble is all that was left of a fire station. 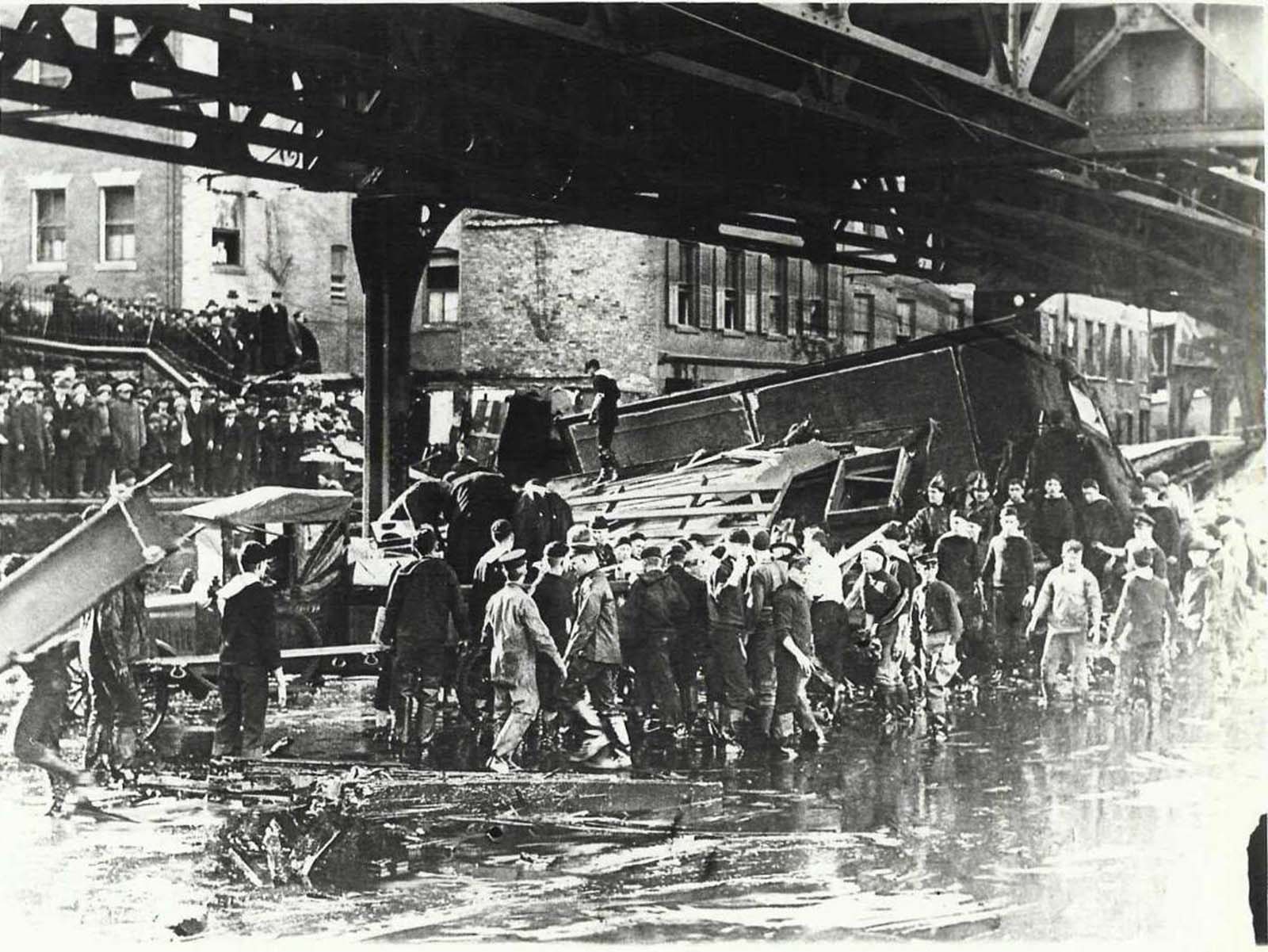 Rescuers tried desperately to save the occupants of the Clougherty house, which was torn from its foundation and smashed against the elevated train trestle by the molasses wave. 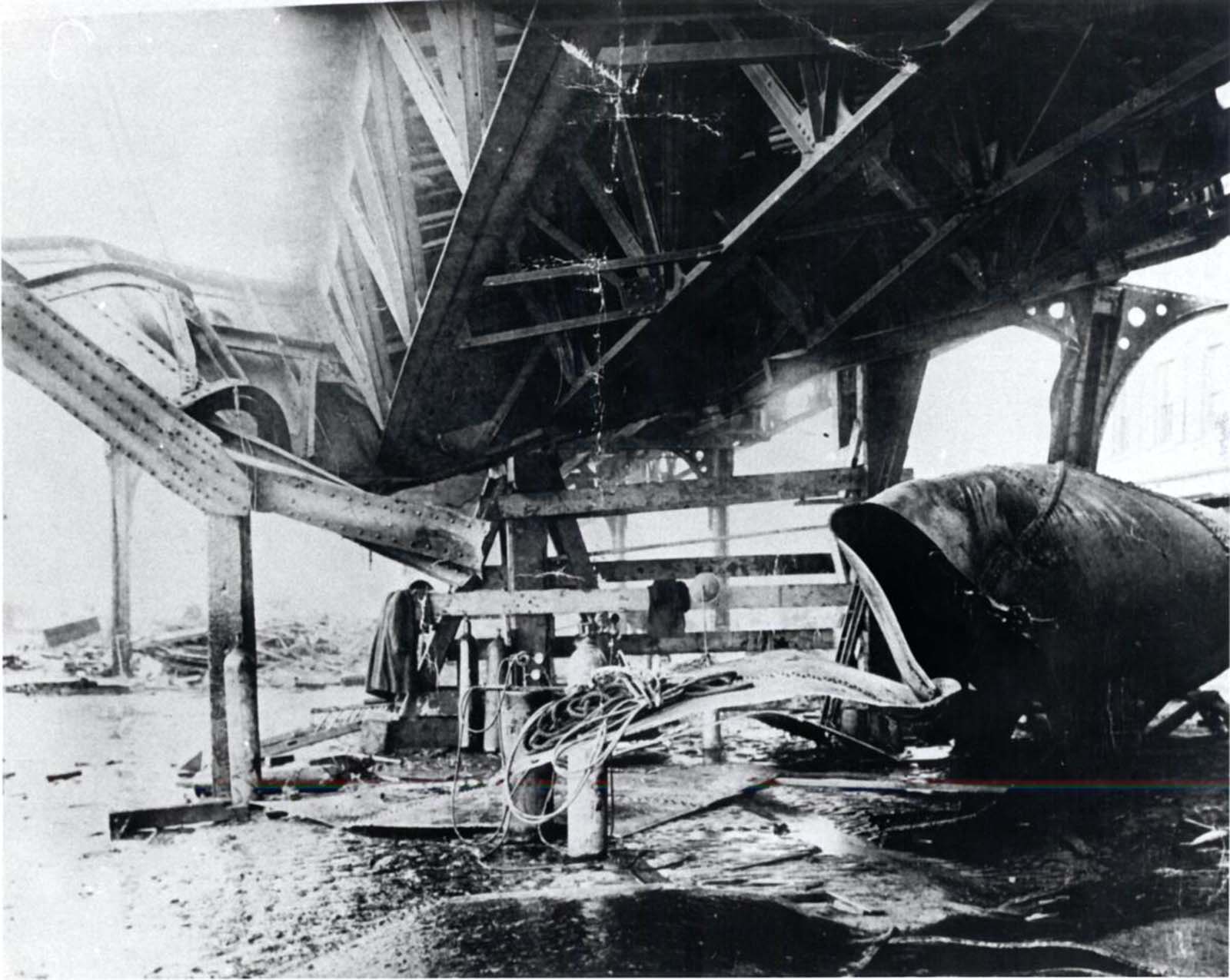 A flood of molasses filled the streets.