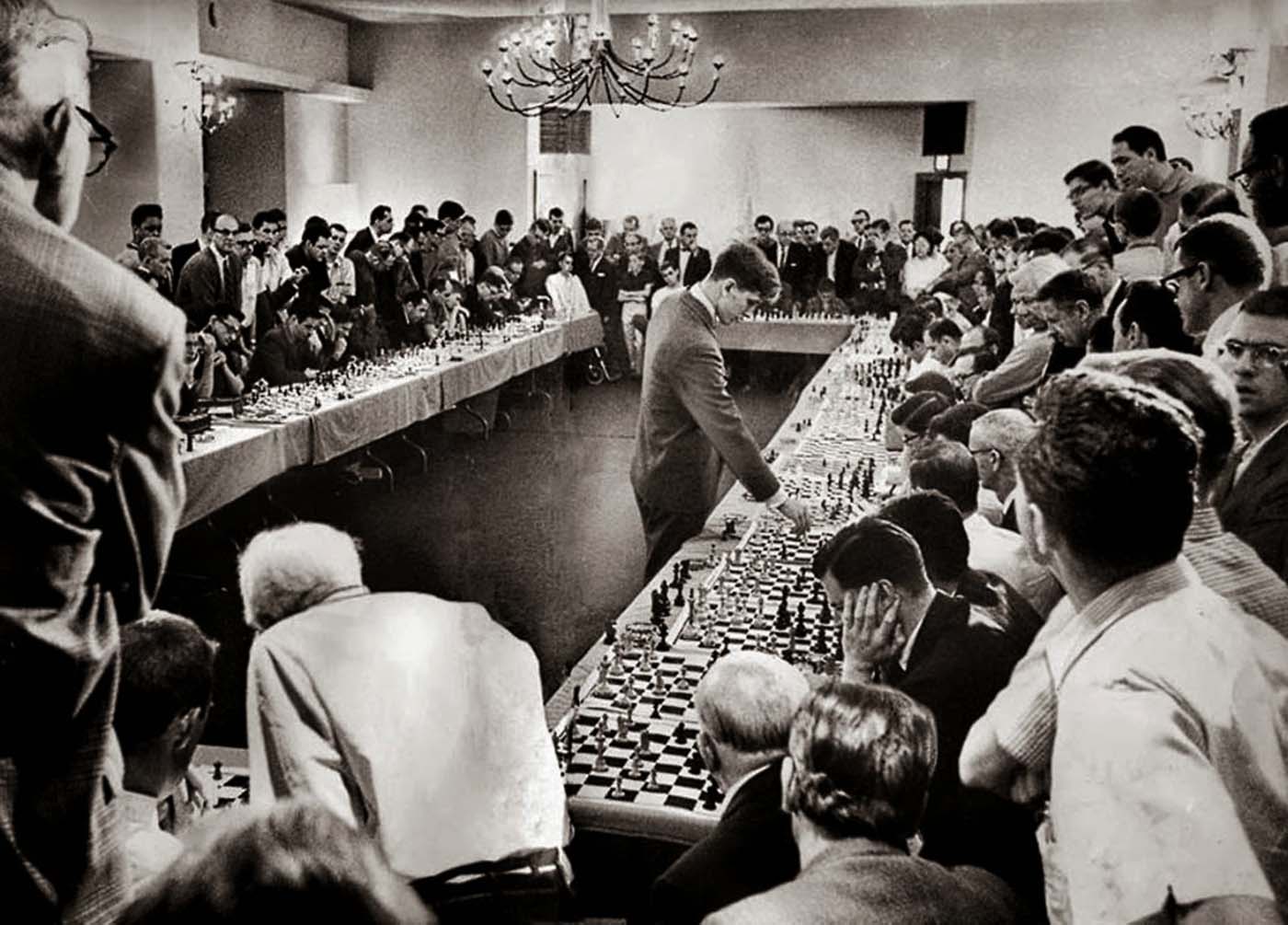 Bobby Fischer is considered by many to be the greatest chess player who ever lived. In this particular simultaneous exhibition, he won 47 of the matches, drew 2, and lost 1. He lost to Donn Rogosin, not a well-known player. Fischer was 21 in this picture.

He is playing white, that’s a big advantage in high-level chess. You can choose an opening that you know well and your opponent doesn’t know well. Basically, you get to decide which direction the game’s going to go for the first few turns. Openings are by the book so to speak, but there are variations and choices you can make.

This is especially obvious in gambit style openings where you offer to sacrifice a piece for the position, here the opponent can choose to take it or not. So there is a lot to know even if the best moves in a given position are known. But grandmasters will know most of these of course and a lot of preparation goes into finding answers to the opening you expect from your opponent.

After only 4 moves, there are already millions of possible openings. Not all of these openings would be viable or “good moves”. There are a lot of openings that have been discovered and masters of the game would know a lot of those.

There are some variations that are more common than others, and those have been logged as ‘book lines’ far past typical opening sequences. The great thing about chess is there are so many ways to create an entirely unique game for yourself each time. Strategies and patterns often repeat, but positions are rarely equal.

Fischer showed skill at an early age. At age 13 he won a “brilliancy” that became known as “The Game of the Century”. Starting at age 14, Fischer played in eight United States Championships, winning each by at least a one-point margin. At age 15, Fischer became both the youngest grandmaster up to that time and the youngest candidate for the World Championship.

At age 20, Fischer won the 1963–64 U.S. Championship with 11/11, the only perfect score in the history of the tournament. His book My 60 Memorable Games (published 1969) became an icon of American chess literature and is regarded as a masterwork.

Fischer won the 1970 Interzonal Tournament by a record 3½-point margin and won 20 consecutive games, including two unprecedented 6–0 sweeps in the Candidates Matches. In July 1971, he became the first official FIDE number-one-rated player.

After losing his title as World Chess Champion, Fischer became reclusive and sometimes erratic, disappearing from both competitive chess and the public eye. In 1992 he reemerged to win an unofficial rematch against Spassky.

It was held in Yugoslavia, which was under a United Nations embargo at the time. His participation led to a conflict with the U.S. government, which sought income tax on Fischer’s match winnings, and ultimately issued a warrant for his arrest.

After that, he lived his life as an émigré. In the 1990s, Fischer patented a modified chess timing system that added a time increment after each move, now standard practice in top tournament and match play.

Great quote from Peter Biyiasas, a champion he beat:

He was too good. There was no use in playing him. It wasn’t interesting. I was getting beaten, and it wasn’t clear to me why. It wasn’t like I made this mistake or that mistake. It was like I was being gradually outplayed, from the start. He wasn’t taking any time to think. The most depressing thing about it is that I wasn’t even getting out of the middle game to an endgame. I don’t ever remember an endgame. He honestly believes there is no one for him to play, no one worthy of him. I played him, and I can attest to that. It’s not interesting.