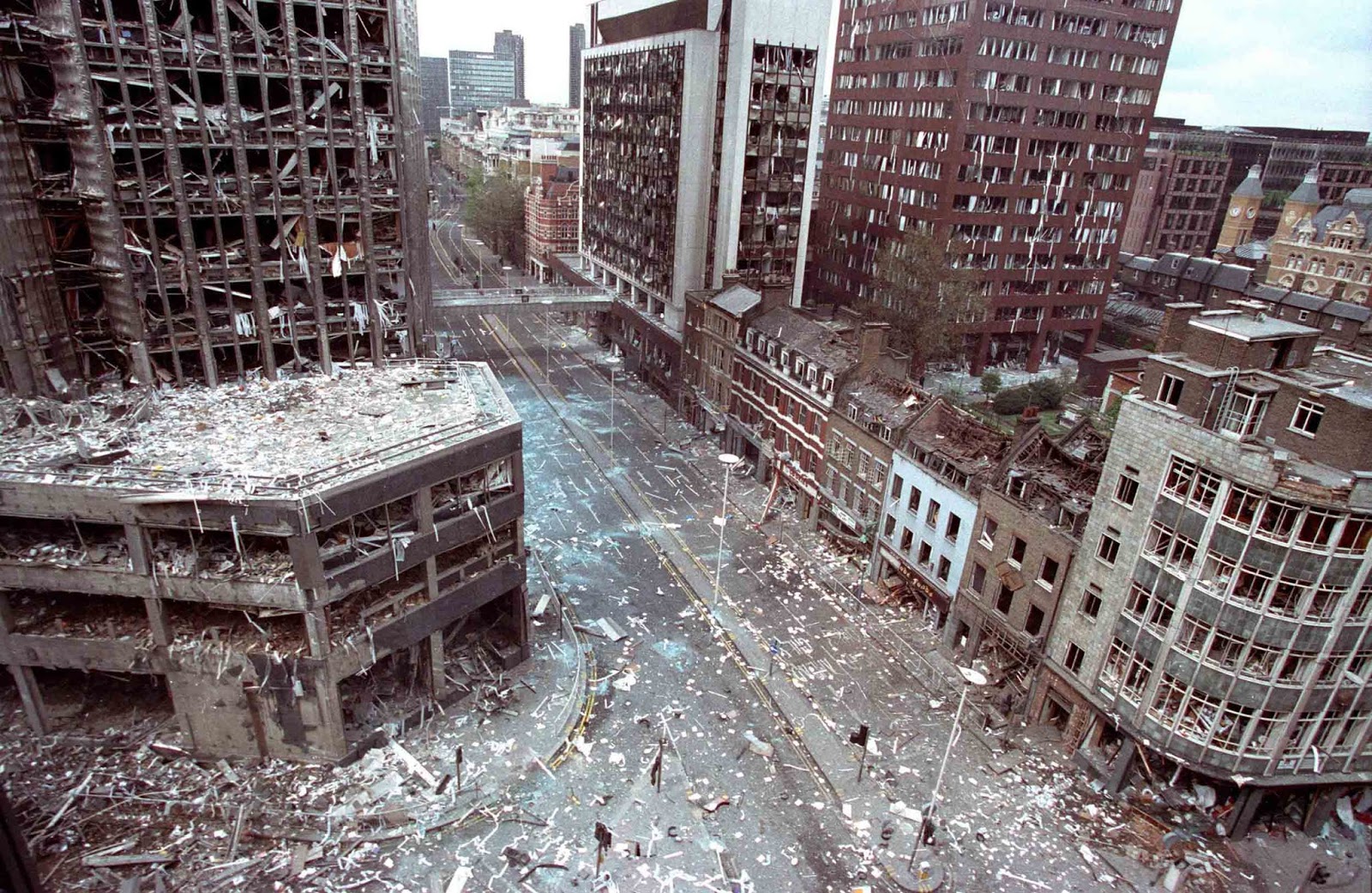 Wormwood Street in London after the IRA had detonated a truck bomb on April 24, 1993.

Bishopsgate, in the heart of the City of London, was the scene of a devastating IRA bombing. A news photographer was killed in the explosion and 44 people were injured; the damage cost £350 million to repair. The attack came just a year after the Baltic Exchange bombing in the same city, and it targeted the economy of the United Kingdom.

In March 1993 an Iveco tipper truck was stolen in Newcastle-under-Lyme, Staffordshire, and repainted from white to dark blue. A 1 tonne ANFO bomb made by the IRA’s South Armagh Brigade had been smuggled into England and was placed in the truck disguised underneath a layer of tarmac. At approximately 9 am on 24 April, two volunteers from an IRA active service unit drove the truck containing the bomb onto Bishopsgate.

They parked the truck outside 99 Bishopsgate, which was then the Hong Kong and Shanghai Bank, located by the junction with Wormwood Street and Camomile Street, and left the area in a car driven by an accomplice. A series of telephone warnings were then delivered from a phonebox in Forkhill,County Armagh, Northern Ireland, with the caller using a recognized IRA codeword and stating “[there’s] a massive bomb… clear a wide area”. Two police officers were already making inquiries into the truck when the warnings were received, and police began evacuating the area.

The bomb exploded at 10:27 am causing extensive damage to multiple buildings along a significant stretch of Bishopsgate; the cost of repair was estimated at the time at £1 billion. Buildings up to 500 meters away were damaged, with 1,500,000 sq ft (140,000 m²) of office space being affected and over 500 tonnes of glass broken. The NatWest Tower — at the time the City’s tallest skyscraper – was amongst the structures badly damaged, with many windows on the east side of the tower destroyed; the Daily Mail said “black gaps punched its fifty-two floors like a mouth full of bad teeth”. The crater. A 1 tonne ANFO bomb made by the IRA’s South Armagh Brigade had been smuggled into England and was placed in the truck disguised underneath a layer of tarmac.

Civilian casualties were low as it was a Saturday morning and the City was typically occupied by only a small number of residents, office workers, security guards, builders, and maintenance staff. Forty-four people were injured by the bomb and News of the World photographer Ed Henty was killed after ignoring police warnings and rushing to the scene. The truck-bomb produced explosive power of 1,200 kg of TNT.

In May 1993 the City of London Police confirmed a planned security cordon for the City, conceived by its commissioner Owen Kelly, and on 3 July 1993 the ‘ring of steel’ was introduced. Most routes into the City were closed or made exit-only, and the remaining eight routes into the City had checkpoints manned by armed police. CCTV cameras were also introduced to monitor vehicles entering the area, including two cameras at each entry point – one to read the vehicle registration plate and another to monitor the driver and passenger. Over 70 police-controlled cameras monitored the City but to increase coverage of public areas “Camera Watch” was launched in September 1993 to encourage co-operation on surveillance between the police, private companies and the Corporation of London. Nine months after the scheme was launched only 12.5% of buildings had camera systems, but by 1996 well over 1,000 cameras in 376 separate systems were operational in the City.

The ideology of the IRA’s campaign was an economic war, the idea being initially to destroy economic targets in Northern Ireland with the intention of making the state so economically nonviable that the British government would abandon it. This was later expanded to the British mainland, with the idea still being to cause maximum economic damage (or military/police casualties) without necessarily targeting civilians. They also phoned in a lot of false alarms as the police would be bound to clear the area, which would also be detrimental to the economy. It sometimes went wrong due to people being uncooperative or police ignoring warnings thinking it was a false alarm.

IRA also targeted commuters, mainly by calling in false alarms. Millions of people commute to London to work every day, and by claiming there was a bomb on the line on a popular commute run, they’d stop tens of thousands getting to work, mainly bankers and important people who’d pressure the government.