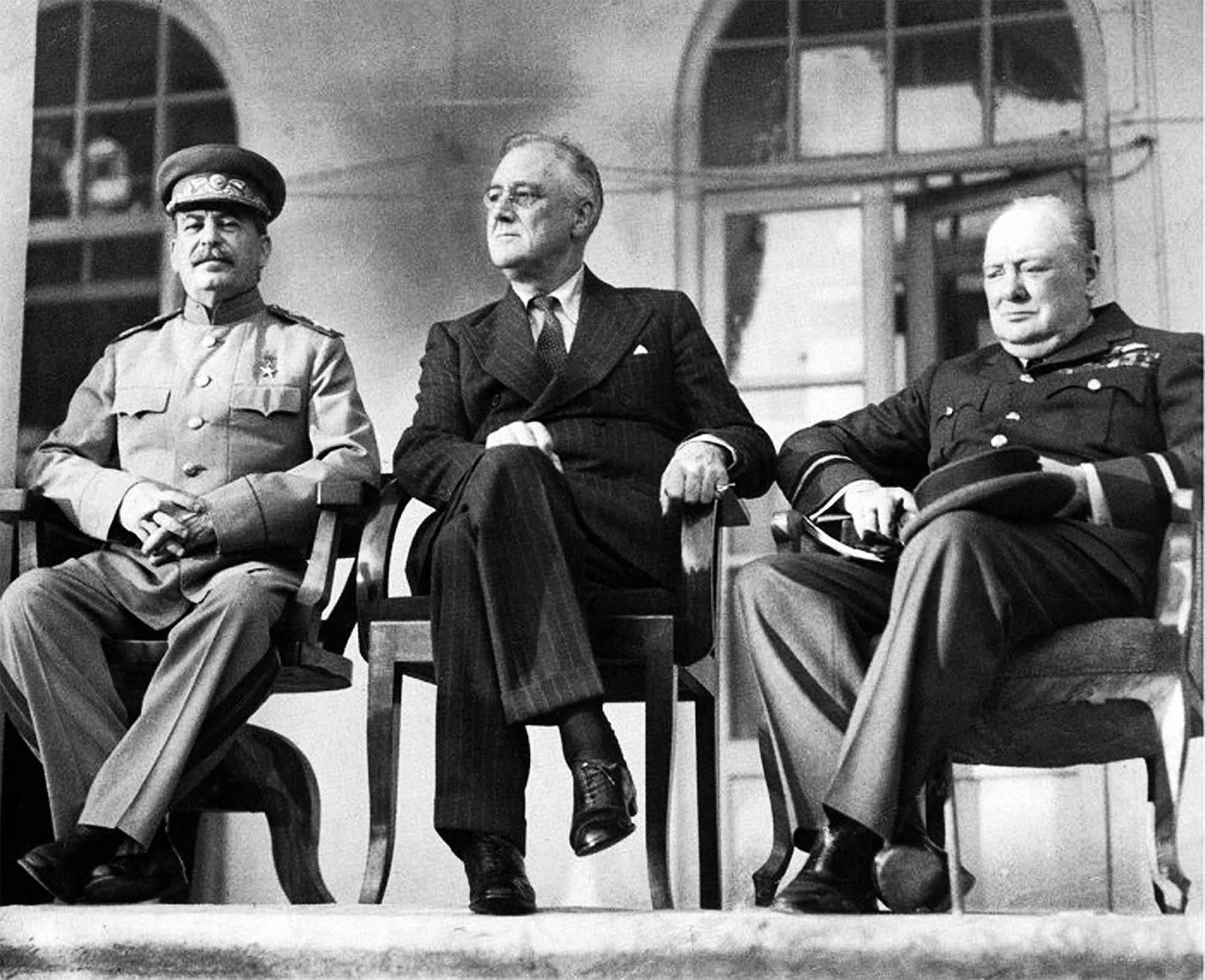 The “Big Three” – Stalin, Roosevelt and Churchill – meet at the Tehran Conference, 1943.

The Tehran was a strategy meeting of Joseph Stalin, Franklin D. Roosevelt, and Winston Churchill from 28 November to 1 December 1943.

The conference was to convene at 16:00 on 28 November 1943. Stalin arrived well before, followed by Roosevelt, brought in his wheelchair from his accommodation adjacent to the venue.

Roosevelt, who had traveled 7,000 miles (11,000 km) to attend and whose health was already deteriorating, was met by Stalin. This was the first time that they had met. Churchill, walking with his General Staff from their accommodations nearby, arrived half an hour later.

The U.S. and Great Britain wanted to secure the cooperation of the Soviet Union in defeating Germany. Stalin agreed, but at a price: the U.S. and Britain would accept Soviet domination of Eastern Europe, support the Yugoslav Partisans, and agree to a westward shift of the border between Poland and the Soviet Union. 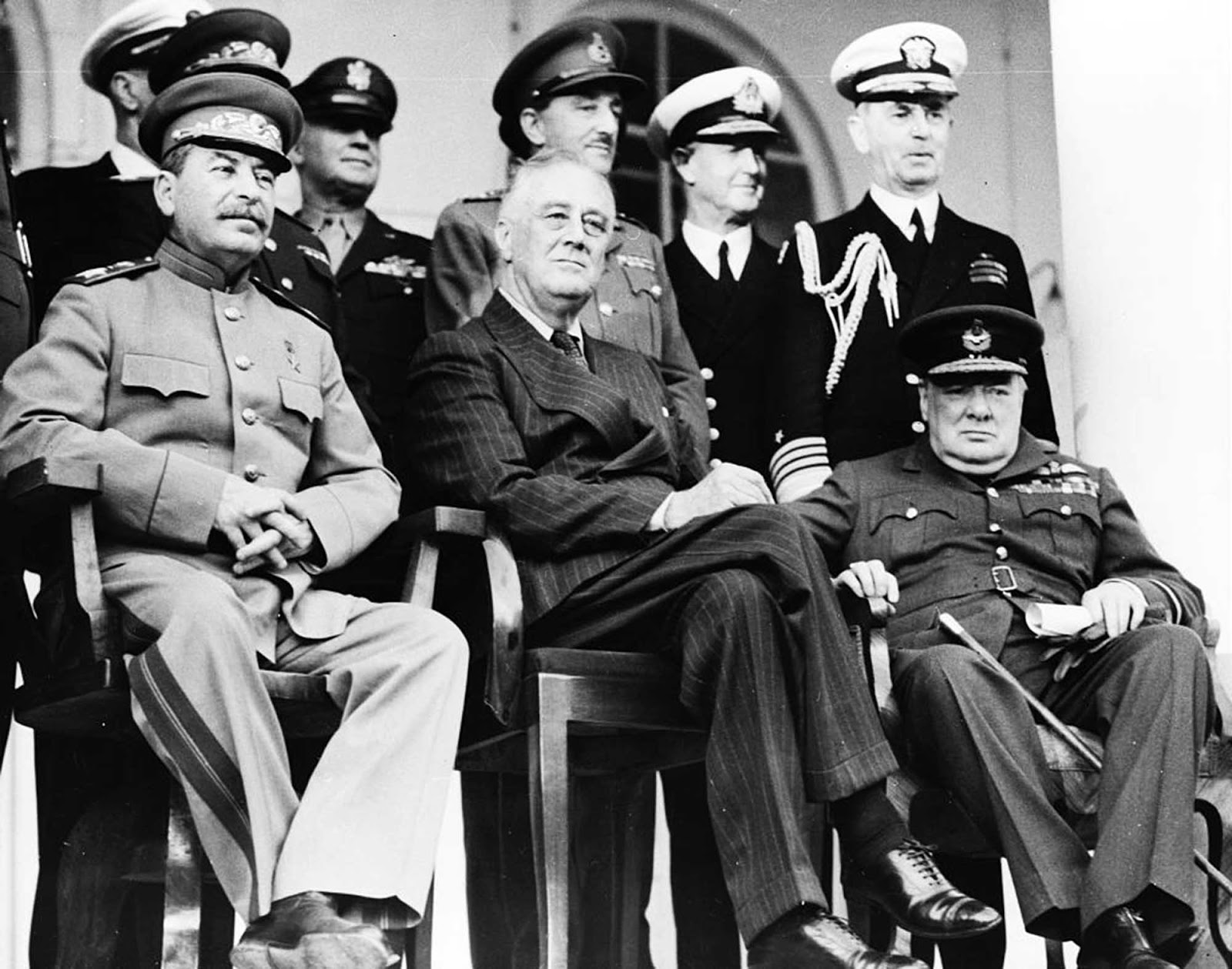 Roosevelt, who had traveled 7,000 miles (11,000 km) to attend and whose health was already deteriorating, was met by Stalin. This was the first time that they had met.

The leaders then turned to the conditions under which the Western Allies would open a new front by invading northern France (Operation Overlord), as Stalin had pressed them to do since 1941.

Up to this point, Churchill had advocated the expansion of joint operations of British, American, and Commonwealth forces in the Mediterranean, as Overlord in 1943 was physically impossible due to a lack of shipping, which left the Mediterranean and Italy as viable goals for 1943.

It was agreed Overlord would occur by May 1944; Stalin agreed to support it by launching a concurrent major offensive on Germany’s eastern front to divert German forces from northern France.

In addition, the Soviet Union was required to pledge support to Turkey if that country entered the war. Roosevelt, Churchill, and Stalin agreed that it would also be most desirable if Turkey entered on the Allies’ side before the year was out.

Despite accepting the above arrangements, Stalin dominated the conference. He used the prestige of the Soviet victory at the Battle of Kursk to get his way.

Roosevelt attempted to cope with Stalin’s onslaught of demands but was able to do little except appease Stalin. Churchill proposed to Stalin a moving westwards of Poland, which Stalin accepted, which gave the Poles industrialized German land to the west and gave up marshlands to the east while providing a territorial buffer to the Soviet Union against invasion. 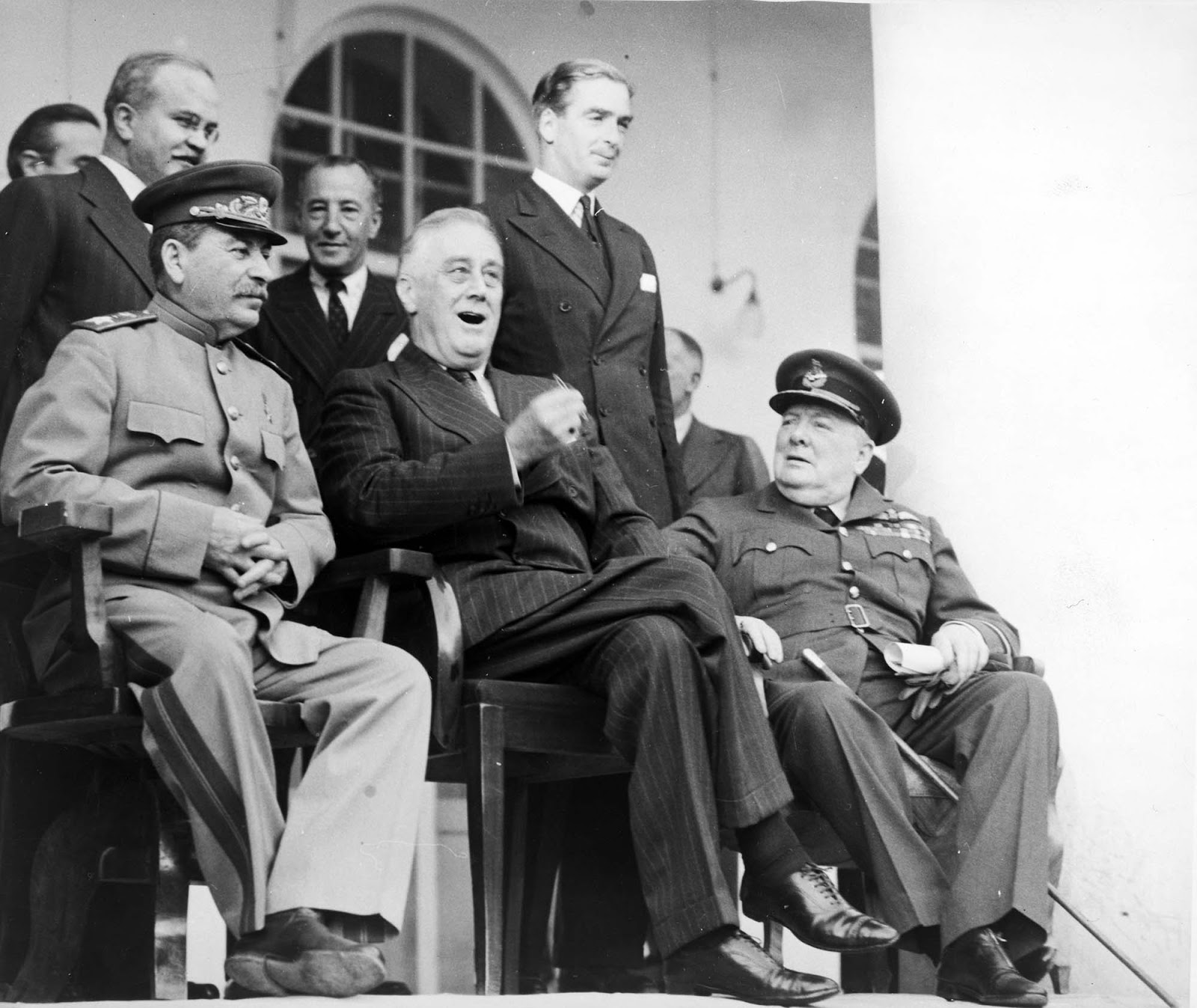 The chairs are different for each of them. Churchill looks more comfortable on his chair.

Stalin proposed executing 50,000–100,000 German officers so that Germany could not plan another war. Roosevelt, believing Stalin was not serious, joked that “maybe 49,000 would be enough”.

Churchill, however, was outraged and denounced “the cold-blooded execution of soldiers who fought for their country”. He said that only war criminals should be put on trial in accordance with the Moscow Document, which he himself had written.

He stormed out of the room, but was brought back in by Stalin who said he was joking. Churchill was glad Stalin had relented, but thought Stalin was testing the waters.

Note on the pictures that each of the leaders is sitting on a different type of chair. It’s heavily documented especially during that era how important chairs were to their leaders.

So all three most likely took their favorite chairs with them wherever they went in case they had to sit down. That’s probably why there are 3 different chairs in the photo.

Roosevelt was the only one not to have an actual military rank. Stalin never wore military uniform prior to 1943, when he got military rank of Marshal of the Soviet Union.

He wears the regular uniform of the Marshal in this picture. Churchill ended his army career as a lieutenant colonel in the Territorial Army (which is like the Army Reserve).

The uniform he’s wearing there is that of an RAF Air Commodore, which is the equivalent of a U.S. one-star rank. He was often seen wearing that uniform in WWII, as he had been awarded an honorary rank by an RAF squadron in 1939.