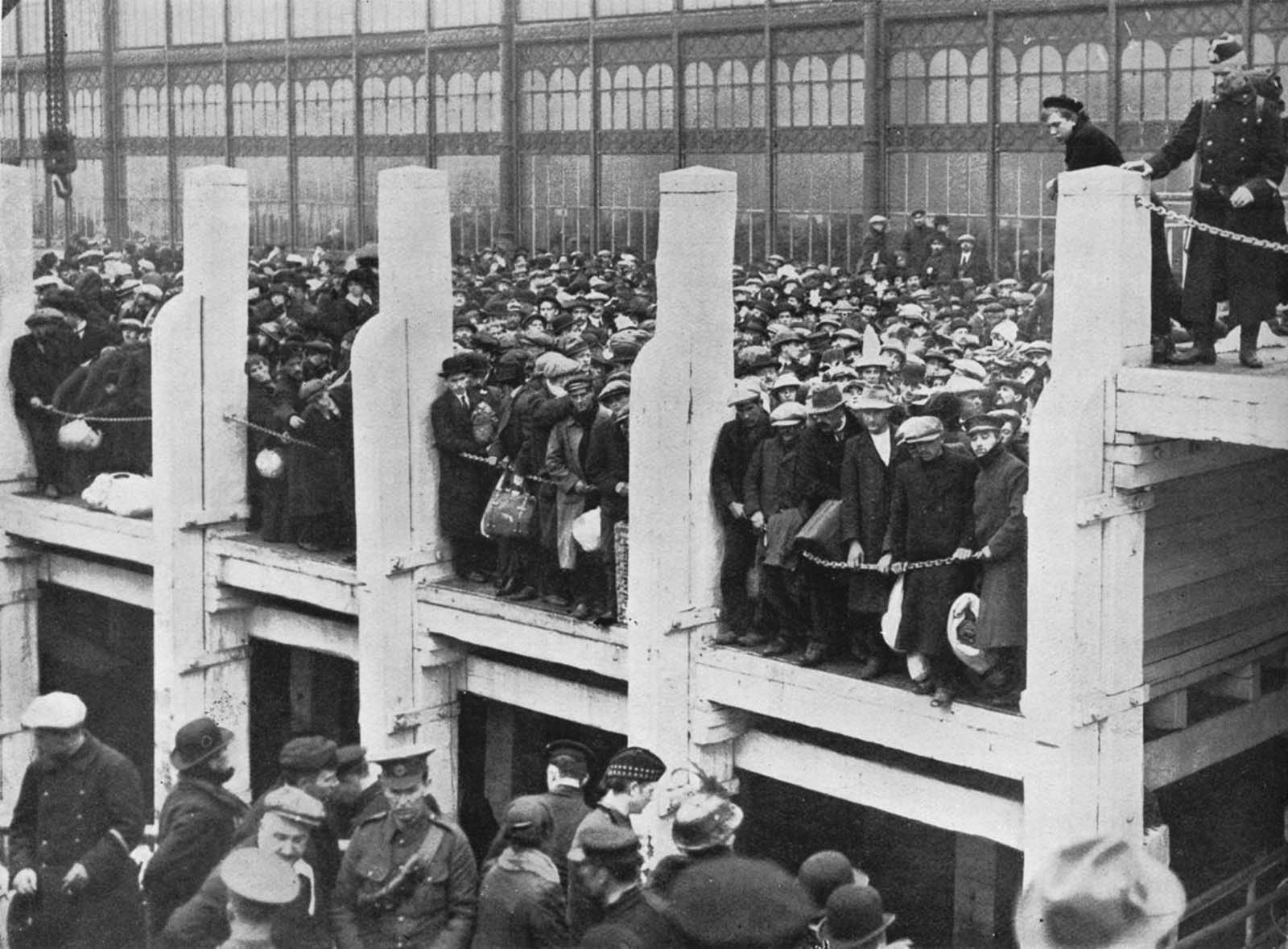 Belgian refugees on the harbor at Ostend waiting for a boat to take them to England. 1914.

The outbreak of war in 1914 left many Belgians homeless and penniless. Germany invaded Belgium on its way to France, sending hundreds of thousands of Belgian refugees fleeing for their lives.

The number of people who fled the country from 1914-18 was approximately one-sixth of the Belgian population. They headed to the United Kingdom, France, and the Netherlands to flee the encroaching German troops.

An estimated 250,000 no less headed to the four nations of Great Britain for safety. In fact, the Belgians in wartime Britain constituted the biggest single ethnic influx of refugees into Britain to date. About one in three stayed in London or its environs.

The number of refugees in Wales, Scotland, and Ireland together was never more than ten percent of the total Belgian community in exile in the British Isles.

The Belgian refugees continued to arrive almost daily for months, landing at other ports as well, including Tilbury, Margate, Harwich, Dover, Hull, and Grimsby.

In some purpose-built villages, they had their own schools, newspapers, shops, hospitals, churches, prisons, and police. These areas were considered Belgian territory and run by the Belgian government. They even used Belgian currency. 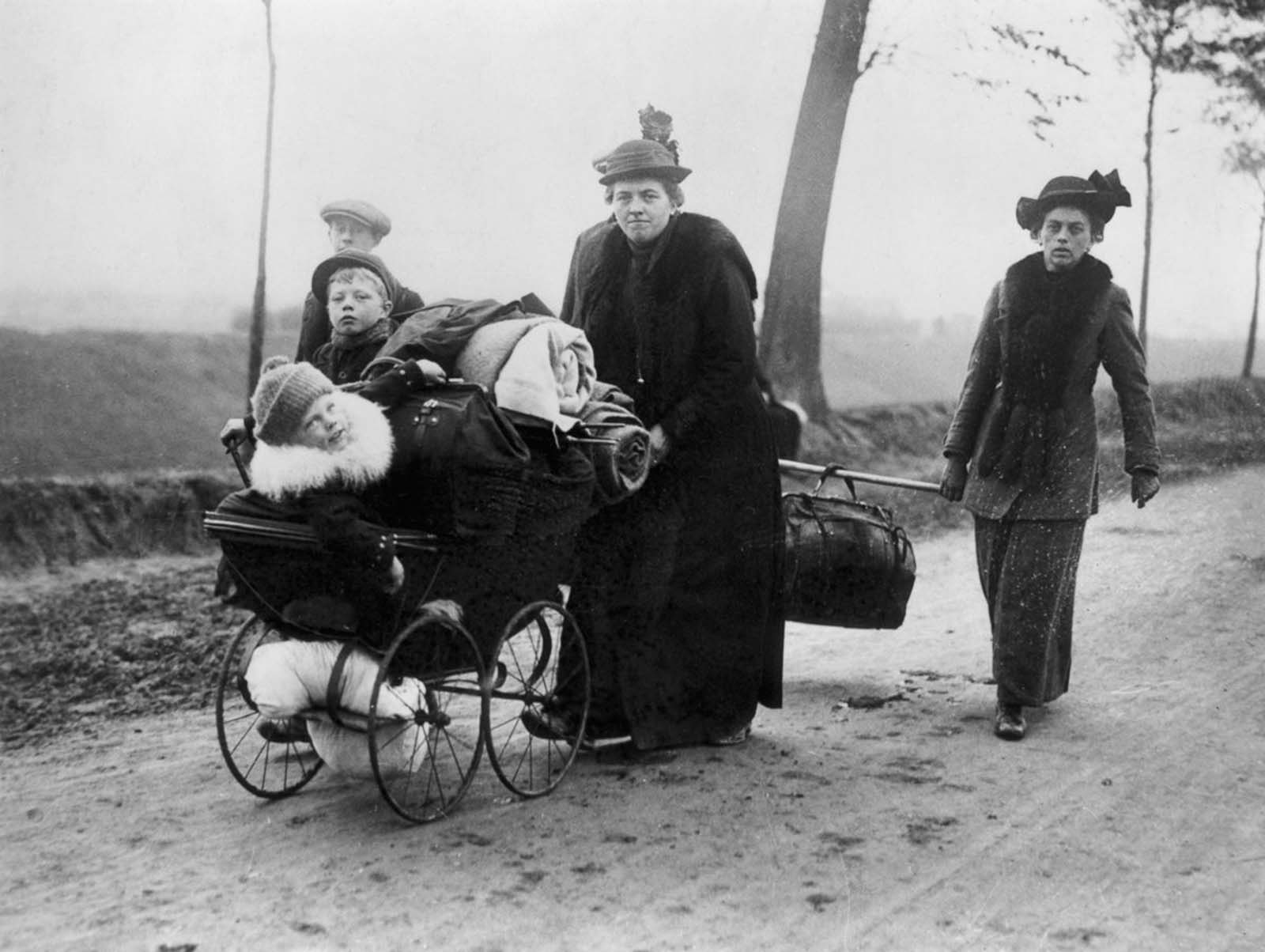 Belgian refugees carry their belongings ahead of invading troops through Northern France. 1914.

Many British factories, particularly the war industry, employed Belgian laborers while some Belgian refugees set up their own factories such as ‘Pelabon’ in Richmond.

Belgian artists, like the sculptor George Minne and the painters Valerius de Saedeleer and Gustave van de Woestijne sought refuge in Wales where they settled and worked. The symbolist poet and art critic Emile Verhaeren also found his way to Wales.

But while at the start of the war, the local populations in the host countries were favorable to the refugees from “Poor Little Belgium”, public opinion gradually turned into mistrust and distance. The UK and France had a different attitude towards the Belgians than the Dutch. In WW1, the Netherlands was neutral.

This was part of a strict policy of neutrality in international affairs that started in 1830 with the secession of Belgium, and the Dutch were seen as being more “suspicious” of the Belgian refugees. 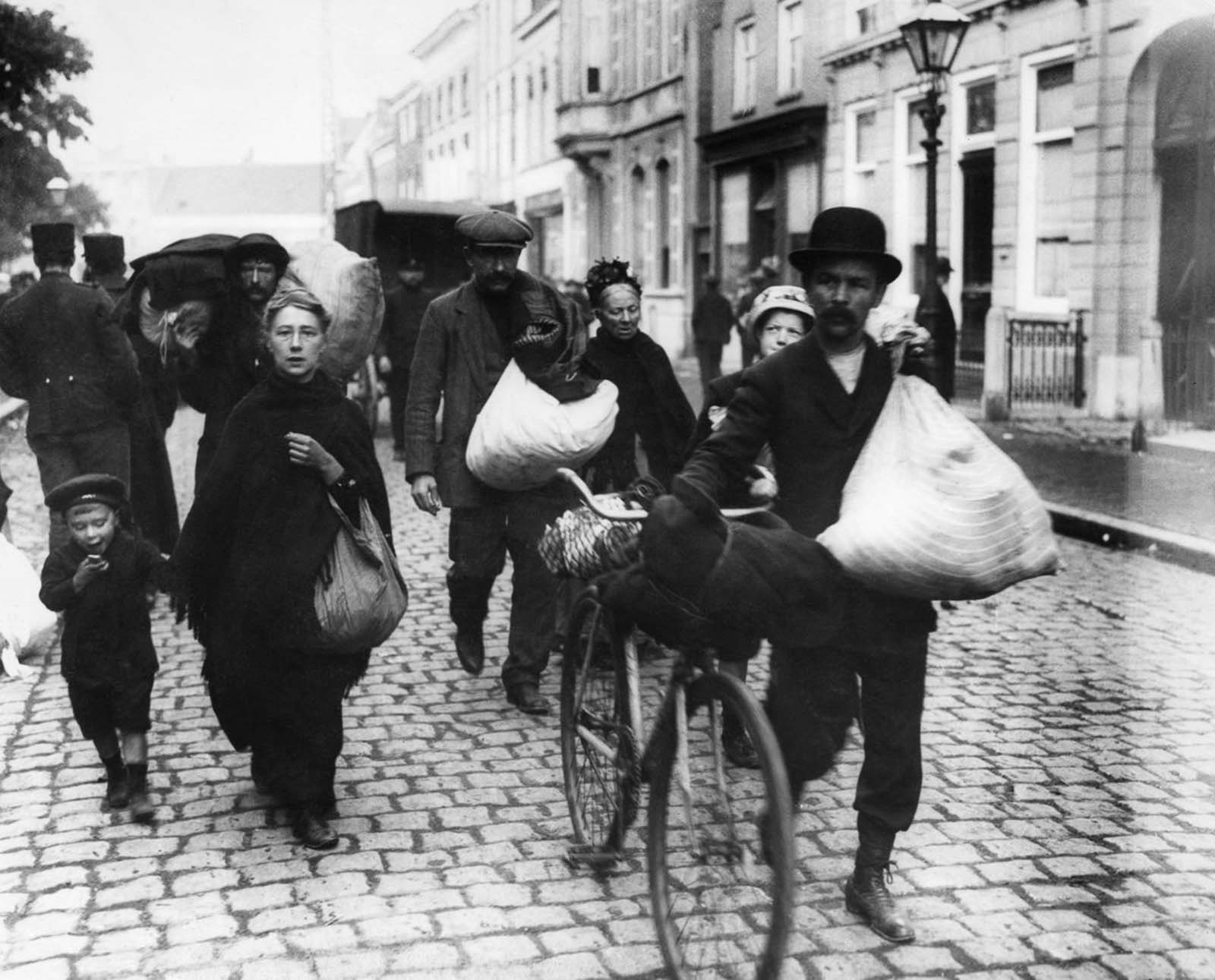 Belgian refugees arrive in the Netherlands. 1914.

The Belgian foreign ministry says that at the start of the hostilities, the Belgian immigrants were generally seen as survivors of brutality and representatives of a small martyred country that had resisted a largely superior invader, in terms of both men and equipment.

Some newspapers at the time compared King Albert I and his troops to King Leonidas who, with his 300 Spartan warriors, stood up to the vast Persian army in the Battle of Thermopylae in 480 BC. But this empathy diminished over time.

And as the war dragged on, Belgian citizens lost the goodwill of the locals and began to be considered as living at a comfortable distance from the battle fields, while their own sons and fathers were fighting on the front-line.

Towards the end of the war, some 140,000 Belgians were still in the UK and some decided to remain in the country that had welcomed them.

But within a year of the war ending on 11 November 1918, more than 90 percent had returned home. Those in the UK were known as the “British Belgians” and many left as quickly as they came, leaving little time to establish any significant legacy. 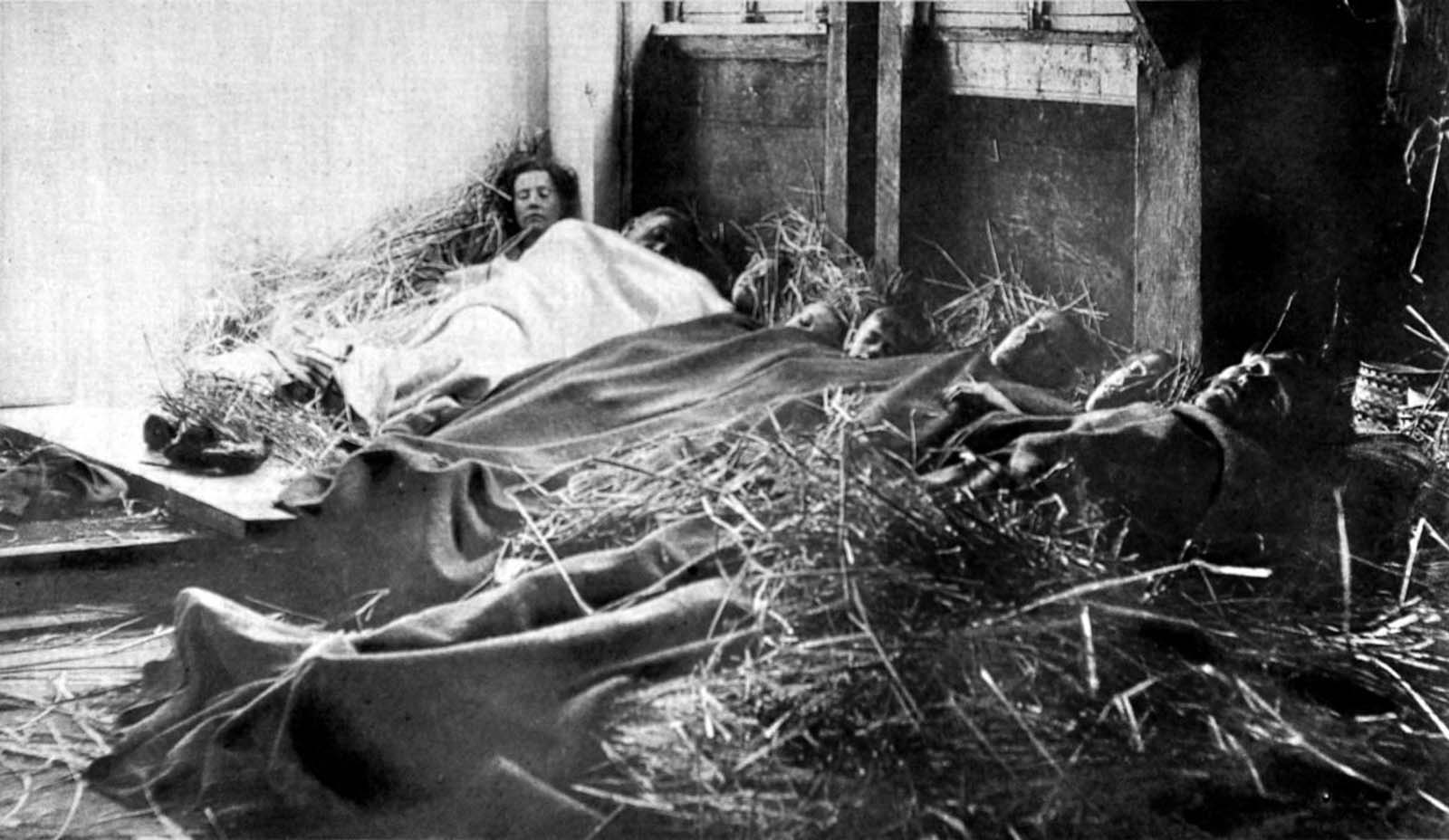 Belgian refugees sleep in a barn in France on Christmas Eve. 1914. 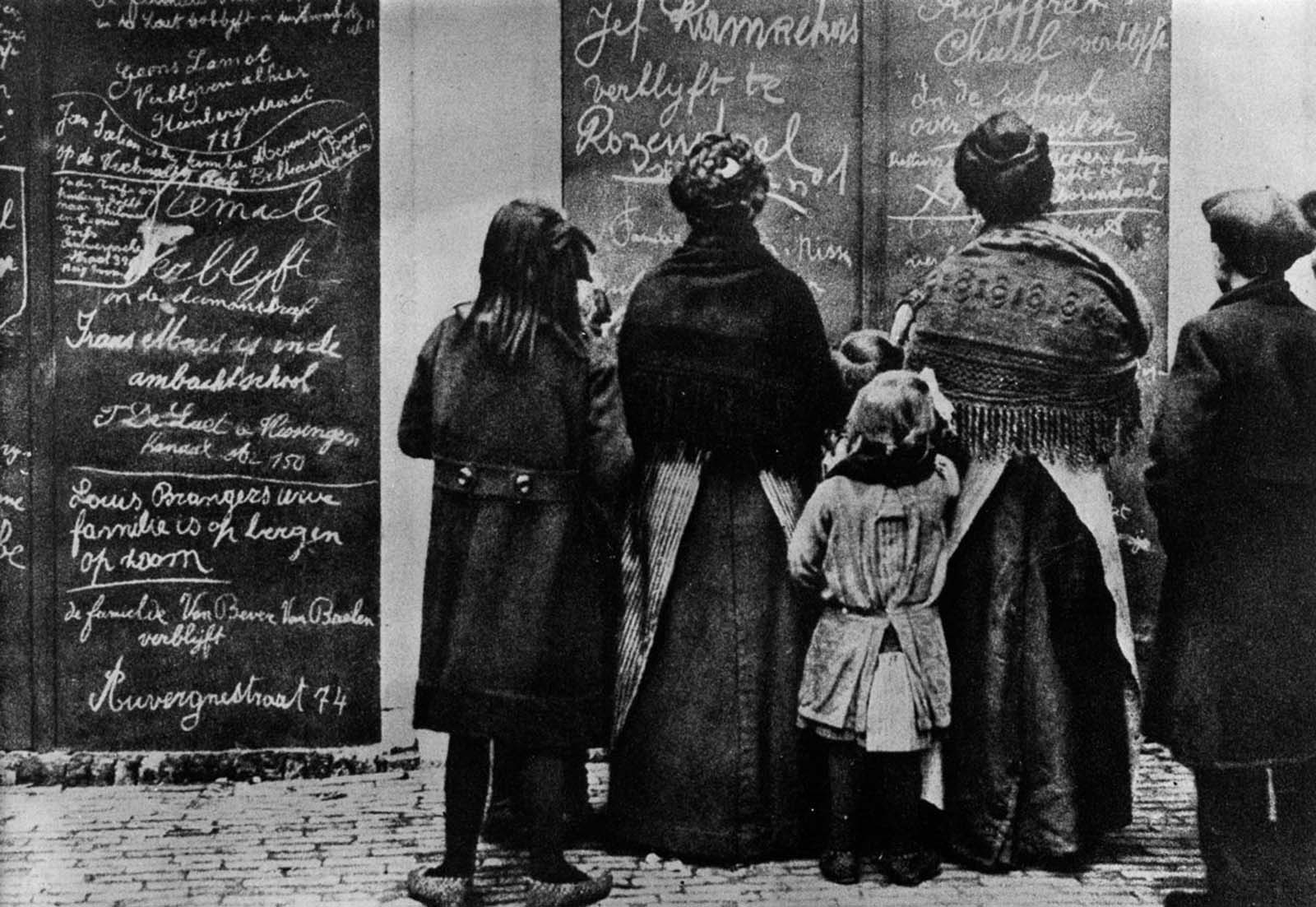 Belgian refugees read Flemish messages left by other refugees in a French town. 1915. 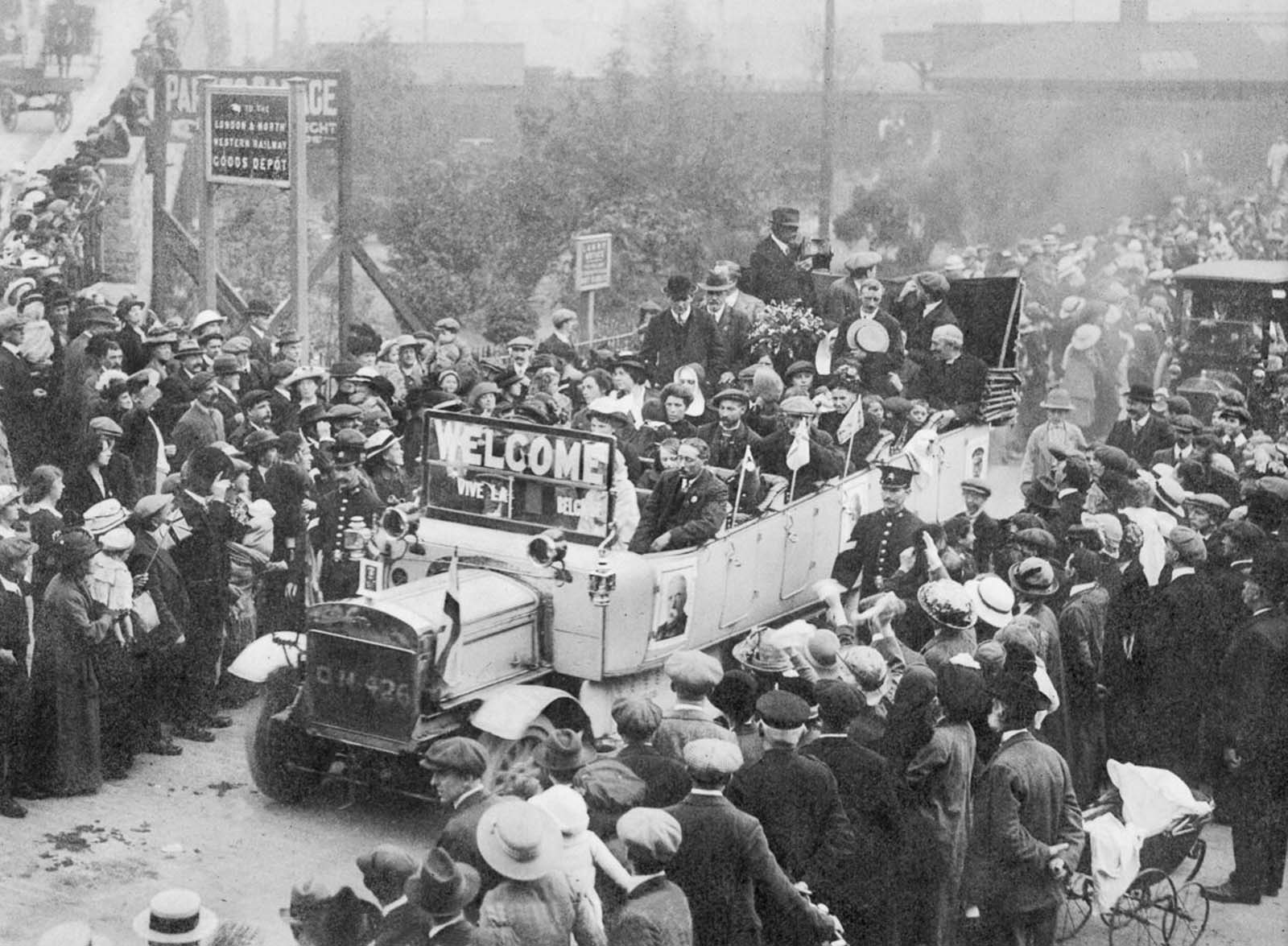 Belgian refugees arrive in the Welsh town of Rhyl. 1914. 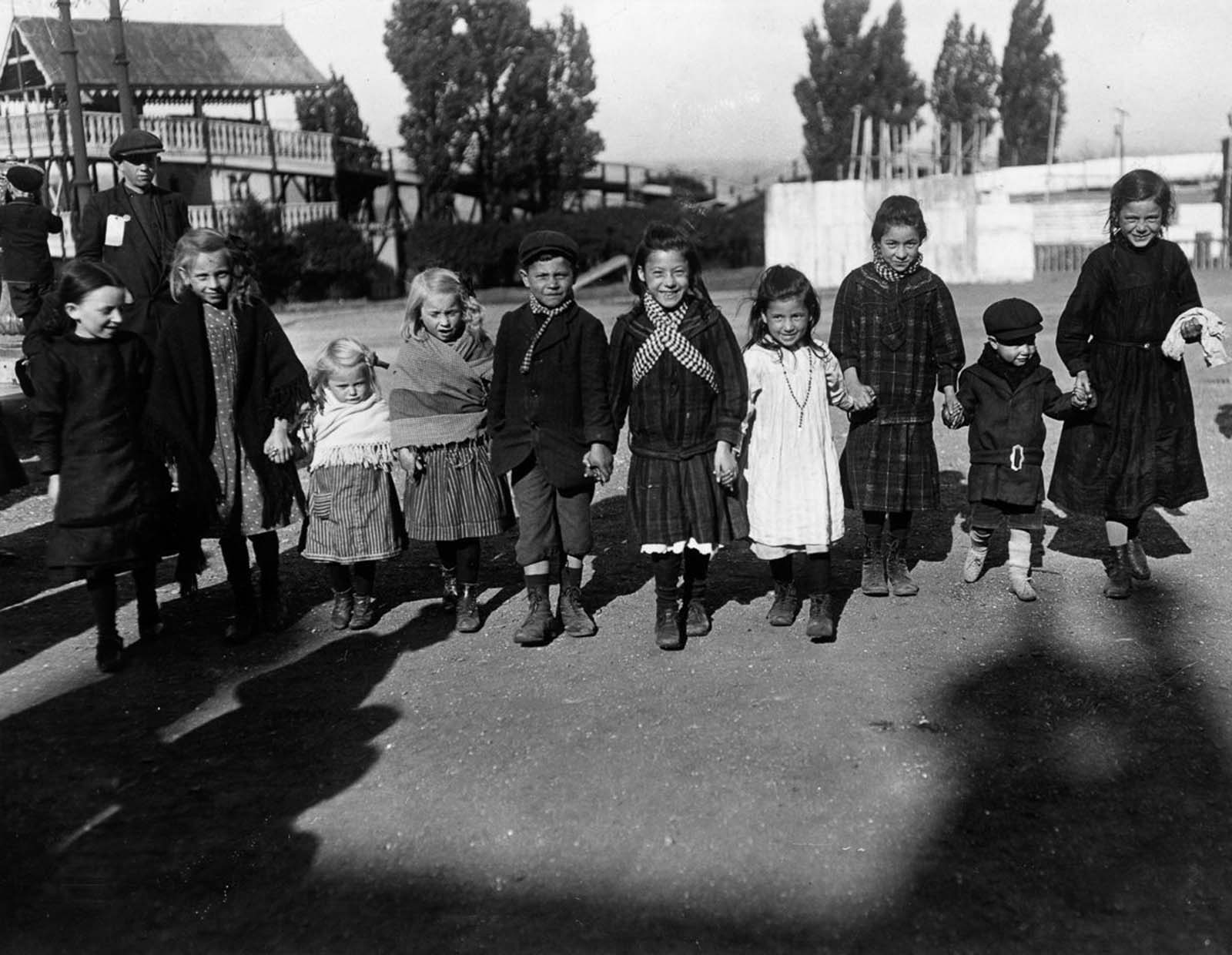 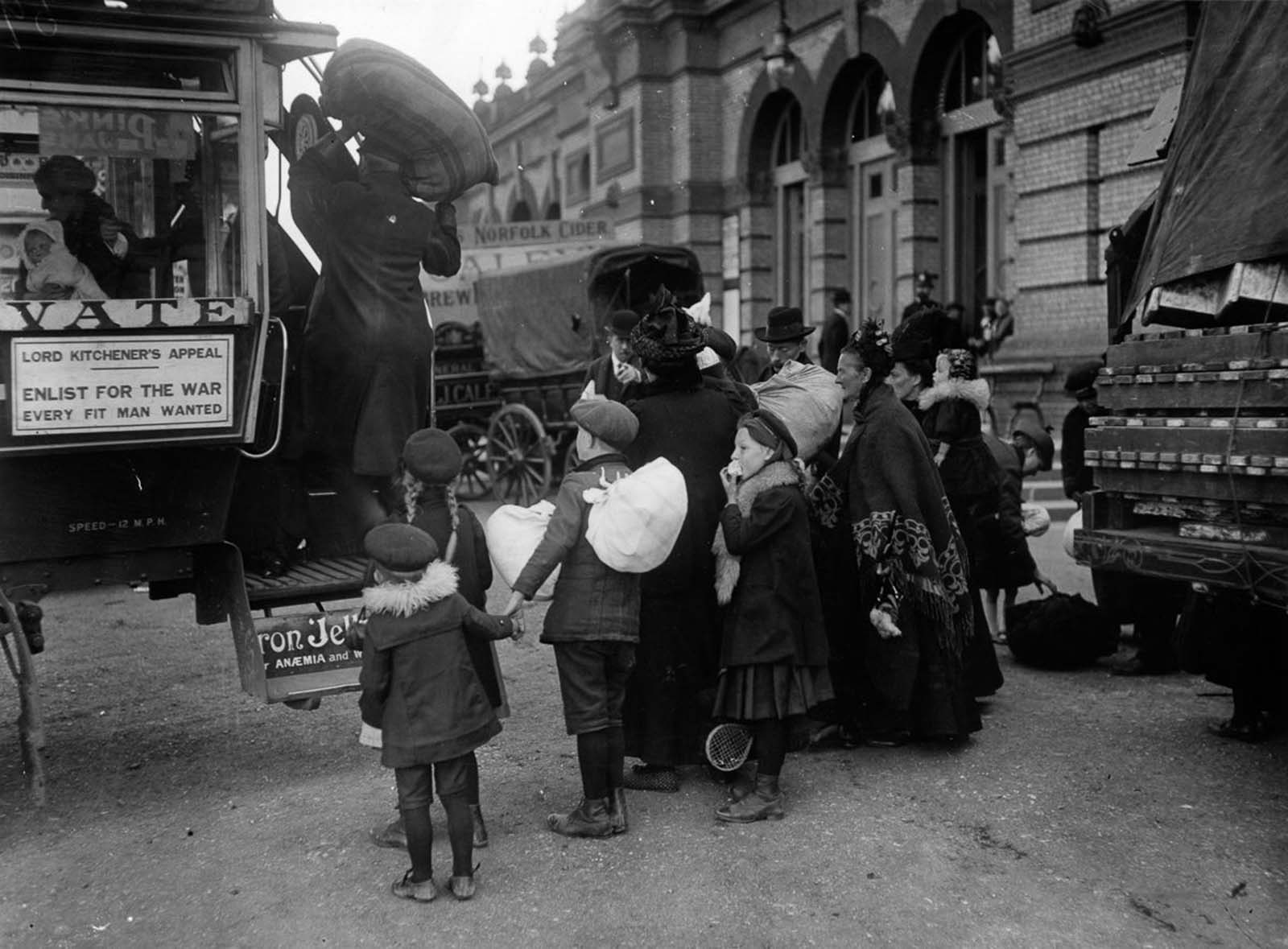 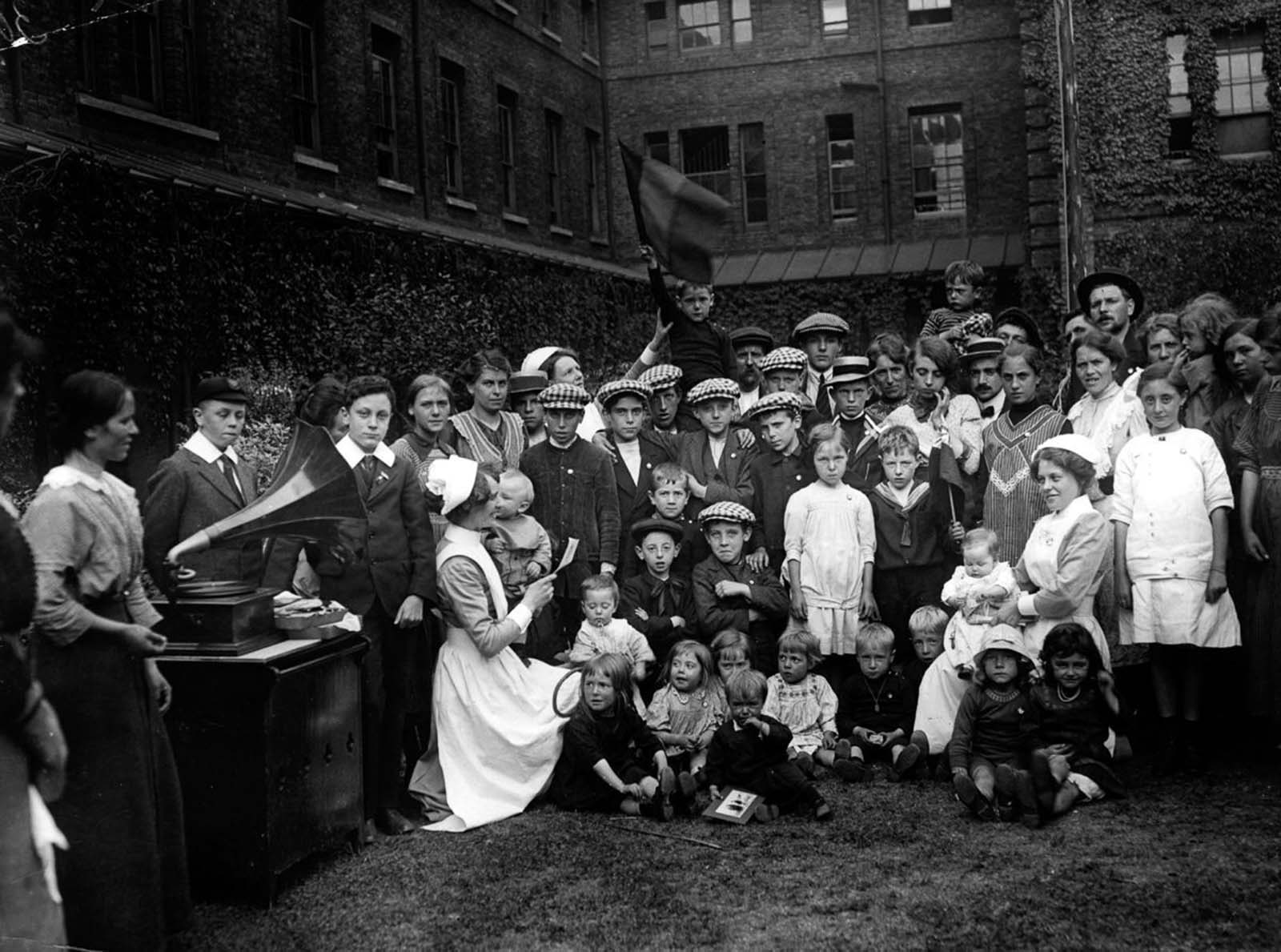 Belgian refugees in a Kensington workhouse. 1914. 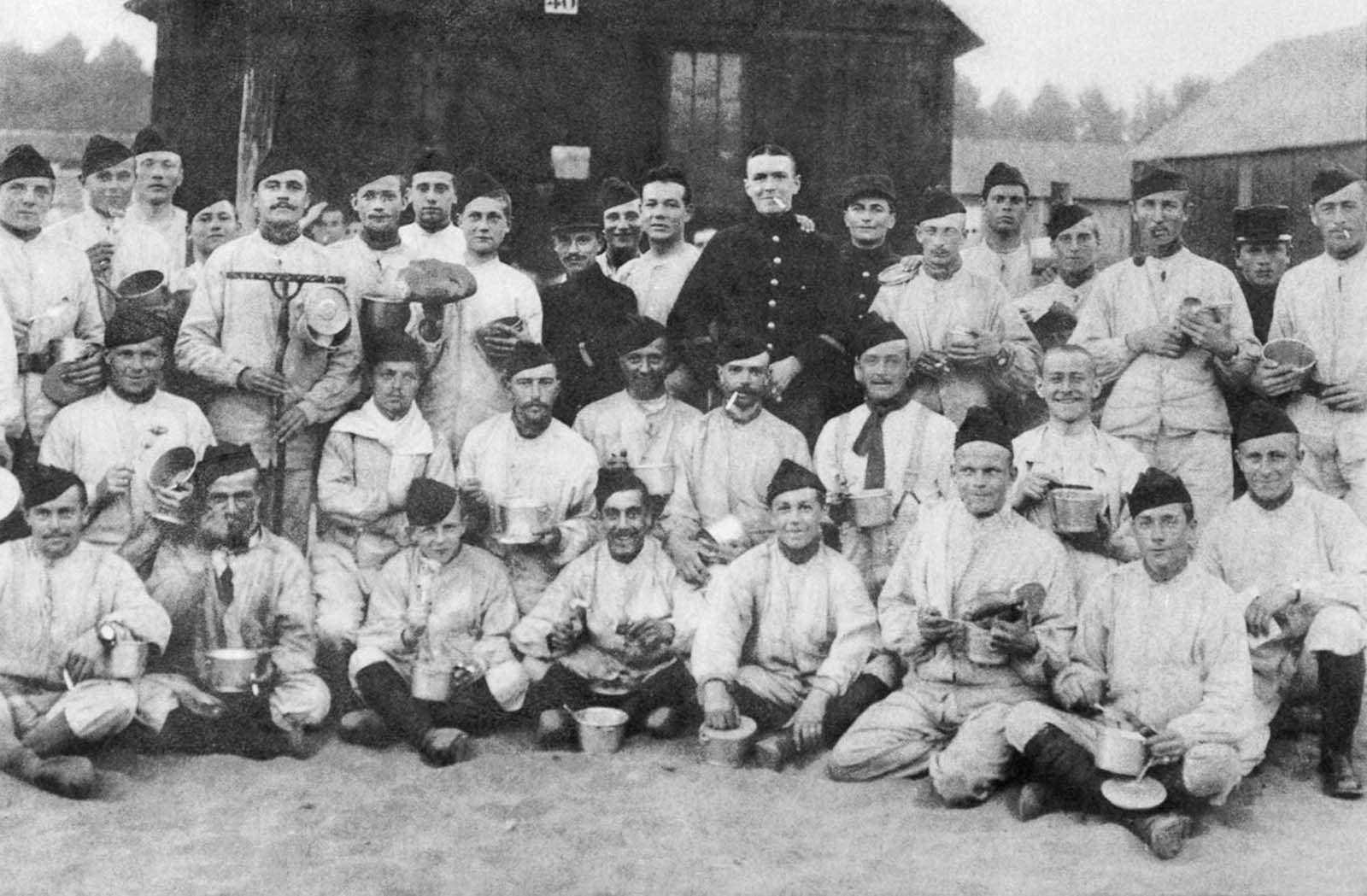 Belgian refugee soldiers in their camp at Hyde near Manchester. 1915 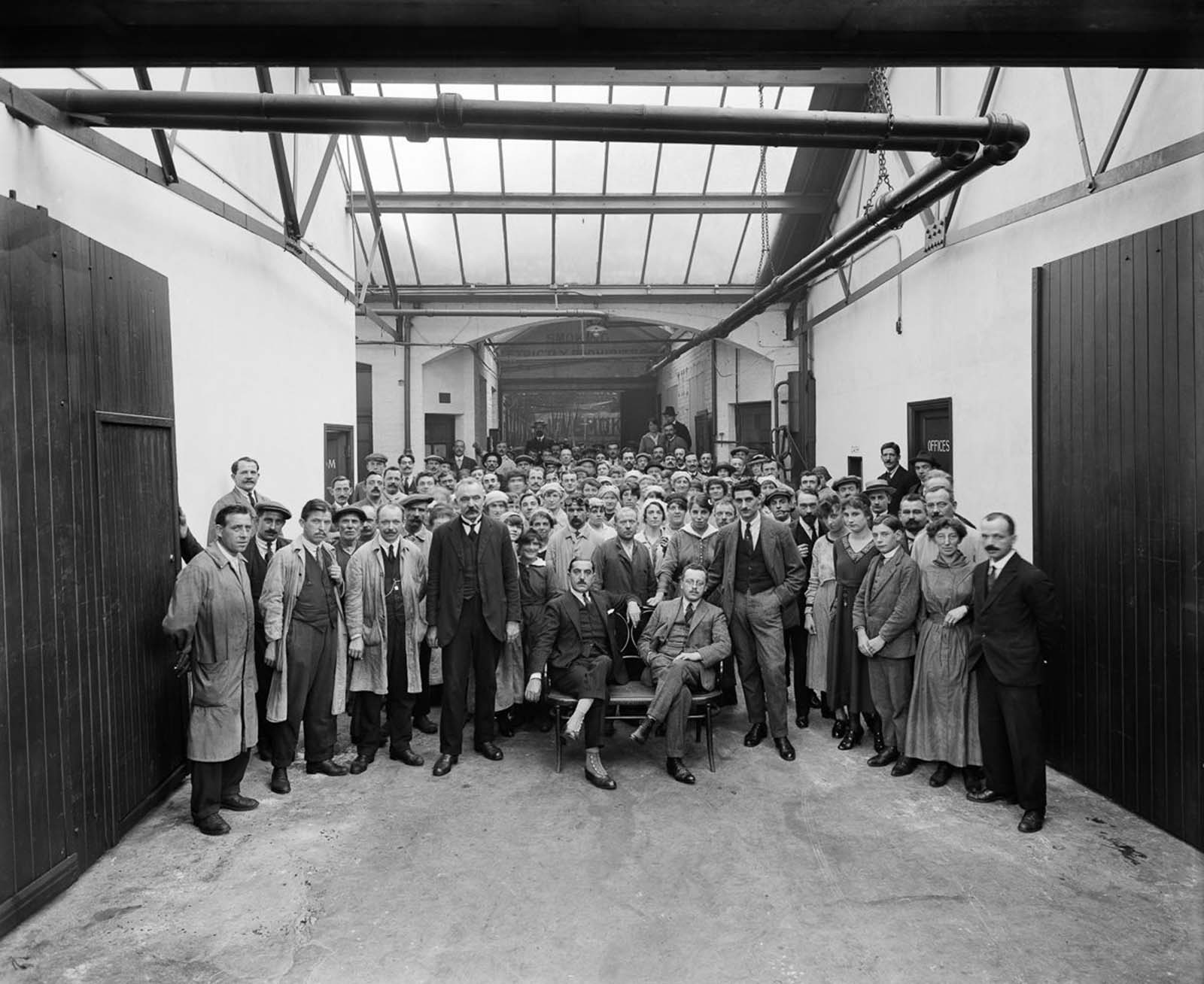 A group portrait of the managers and workers in the Belgian Munition Works in London, which employed Belgian refugees to manufacture grenades and artillery shells for the war effort. 1918. 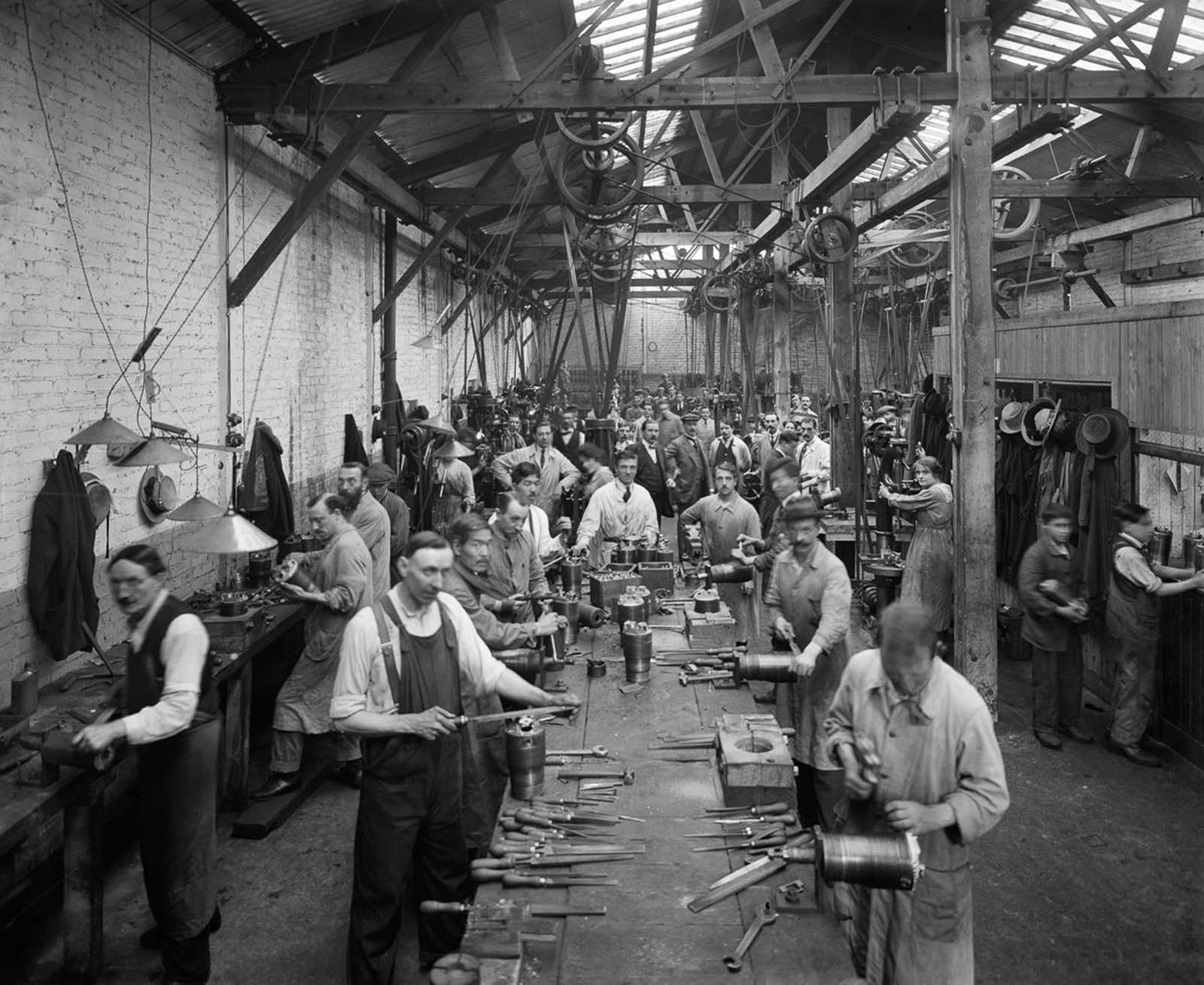 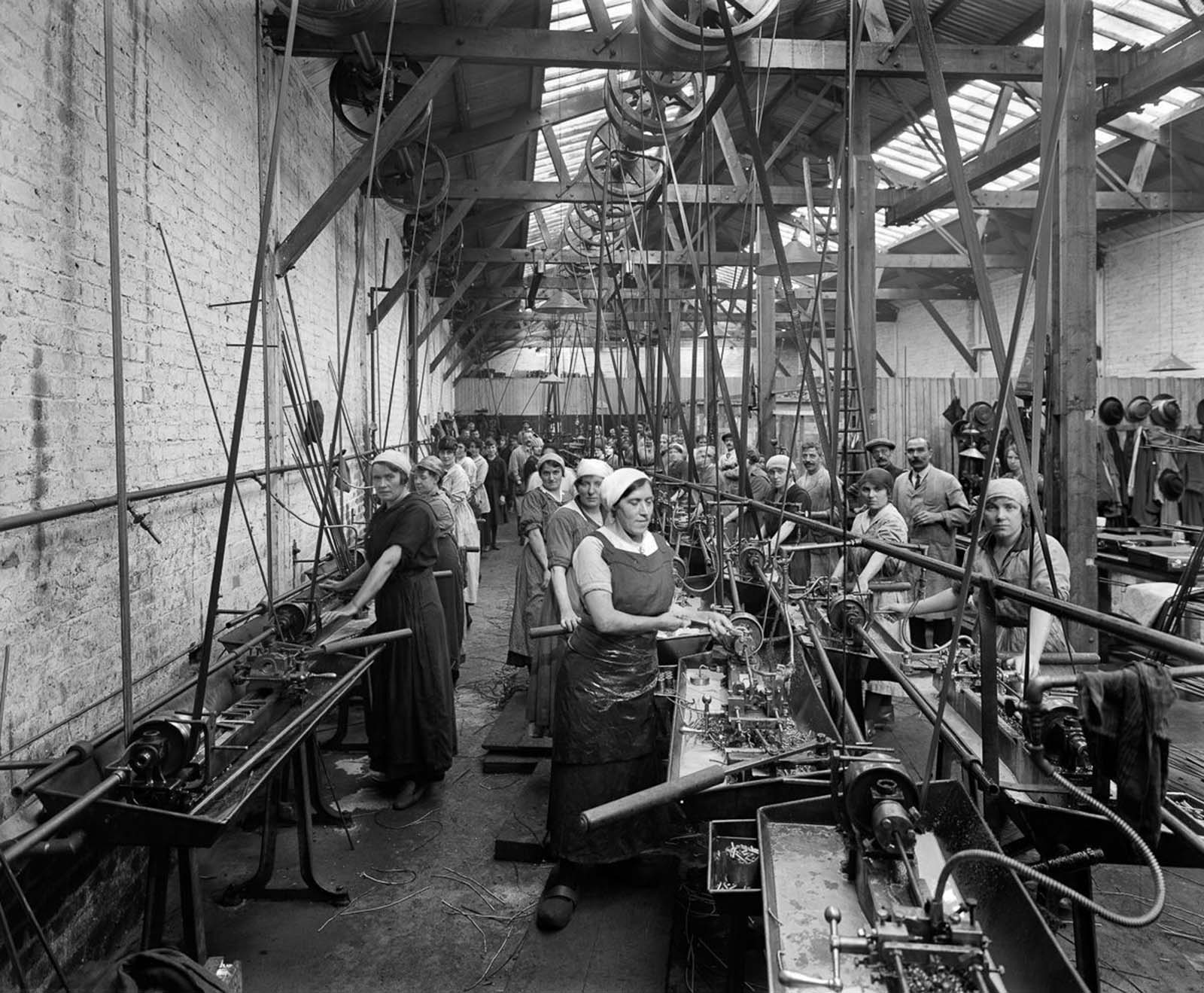 Belgian refugee women use lathes to make ammunition casings at the Belgian Munition Works in London. 1918. 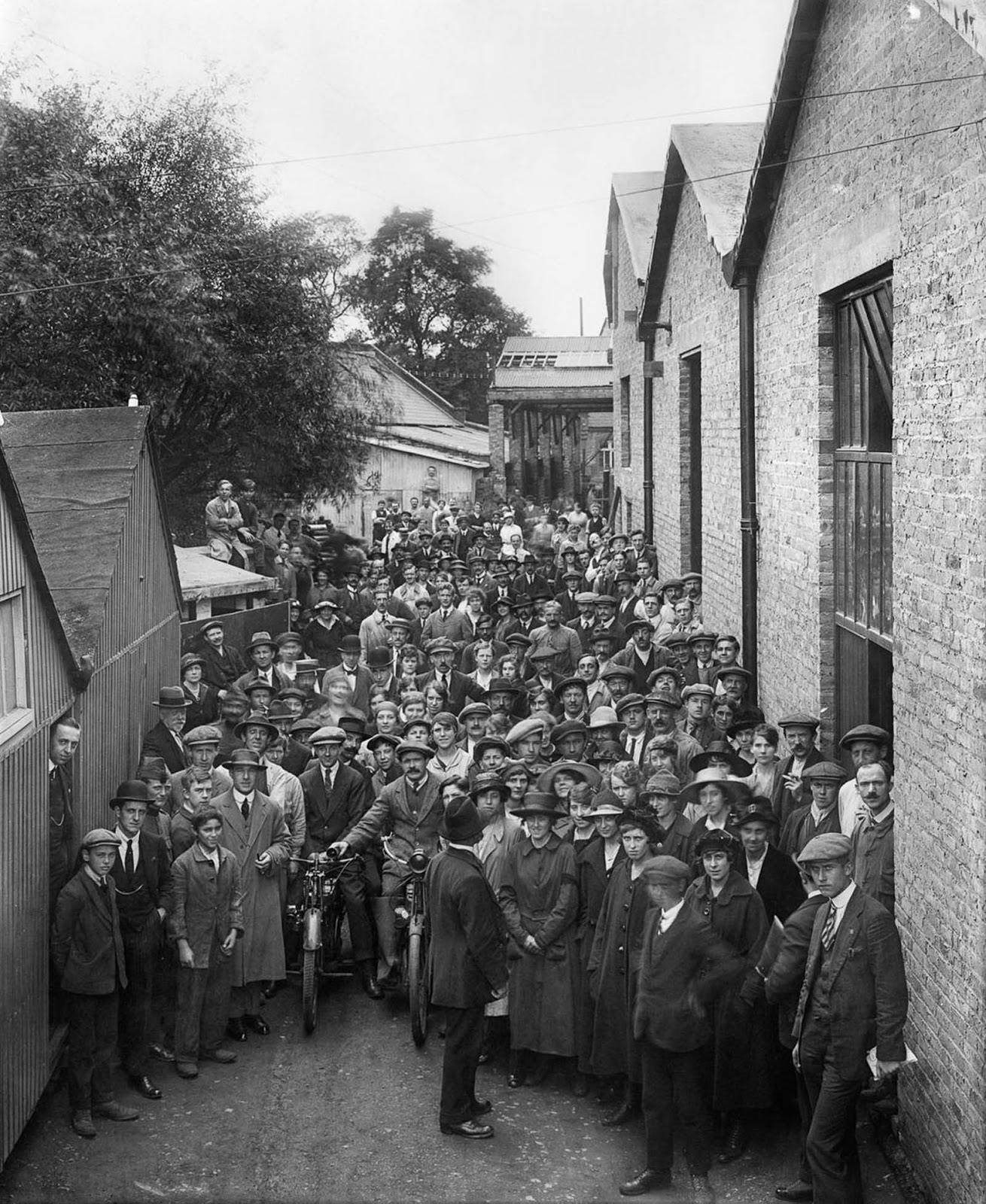 Belgian refugees outside the Belgian Munition Works in London, where they were employed to manufacture explosives for the war effort. 1918. 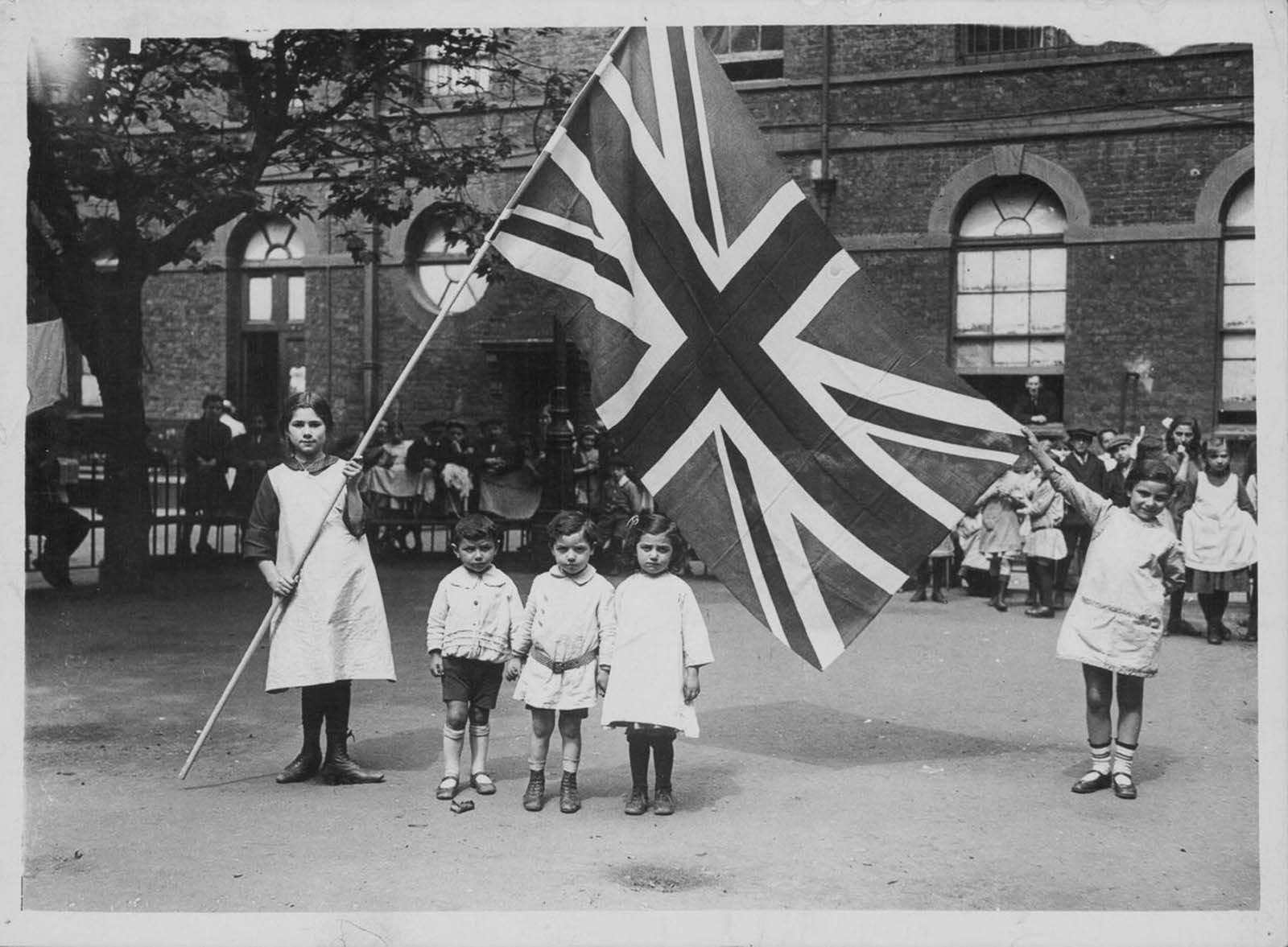