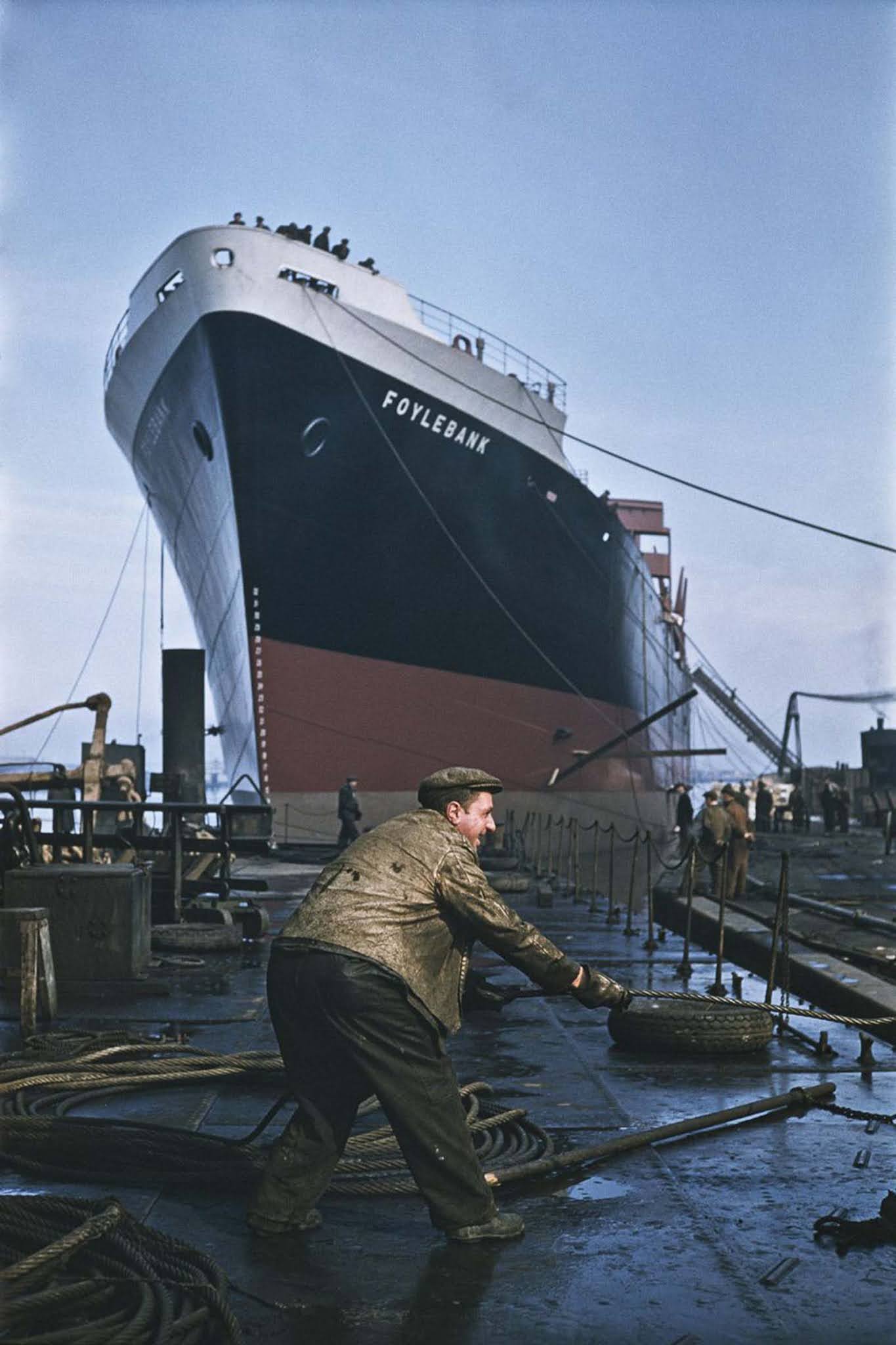 The cargo ship Foylebank under construction at the Harland & Wolff shipyard. The ship was later renamed Patroclos.

These amazing color photos of Belfast capture the shipyards, the lively streets, the everyday life, the fashion, and document a city worlds away from the one we know today. The pictures were taken by documentary and Press photographer, Bert Hardy, who’s best known for his work in the Picture Post magazine.

There is the romance of long-forgotten times when Belfast trams still ran, and steam trains thundered to Derry, Enniskillen, and Newcastle while the Fintona horse tram was still in operation. There were only 60,000 phones so the telegram, letter, and postcard remained crucial to communication.

There were still 50,000 horses on Ulster farms and they remained a significant element in urban transport and outnumbered the 54,000 cars. In the home, central heating and double glazing were almost unheard of, and very few households possessed a fridge.

The years between 1880 and the outbreak of the Great War were the golden age of Belfast shipbuilding. In 1914 Belfast shipbuilders accounted for nearly 8 percent of world output. In some years Belfast managed to account for an even higher percentage of world output. A Financial Times supplement in March 1914 described Belfast as ‘the premier shipbuilding center of the entire world’.

Early twentieth-century Belfast possessed two great shipyards: Harland & Wolff and Workman, Clark & Co. The former was the ‘big yard’, while the latter was affectionately known as the ‘wee yard’. Before the outbreak of The Great War in 1914, over 25,000 men worked in the Belfast yards but this dropped to fewer than 3,000 by 1933.

In the lead up to the Second World War, work in the Belfast shipyard intensified. Throughout the war, Harland and Wolff Shipyard began producing vessels at a rate not seen since The Great War or since the Golden Age of Victorian shipbuilding. As orders from the British Admiralty rolled in, employment rose again to over 20,000 men. Their output included gunboats, depot ships, monitors, cruisers, destroyers, aircraft carriers, patrol boats, trawlers, minesweepers, corvettes, tankers, and assault ships.

The workforce peaked in the post-war years, but by the late 1950s, the yard was facing increased global competition and the impact of the rise of air travel.

The launch of the Canberra in 1960 marked the last cruise liner to be built in Belfast, and by the middle of the decade, the business was in serious decline. The following decades saw further sectarian trouble in the yard and a steady decline in the number of ships built. 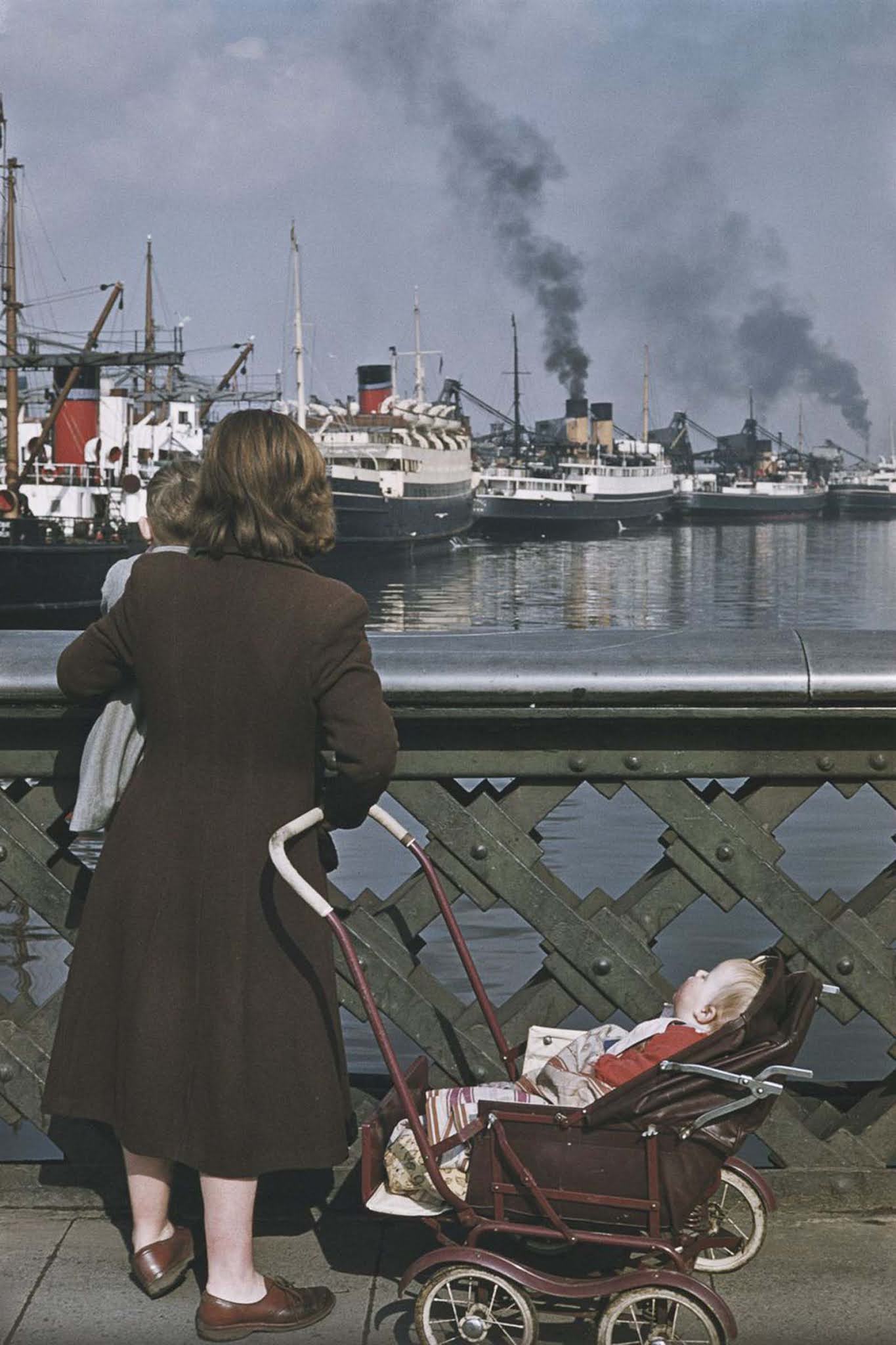 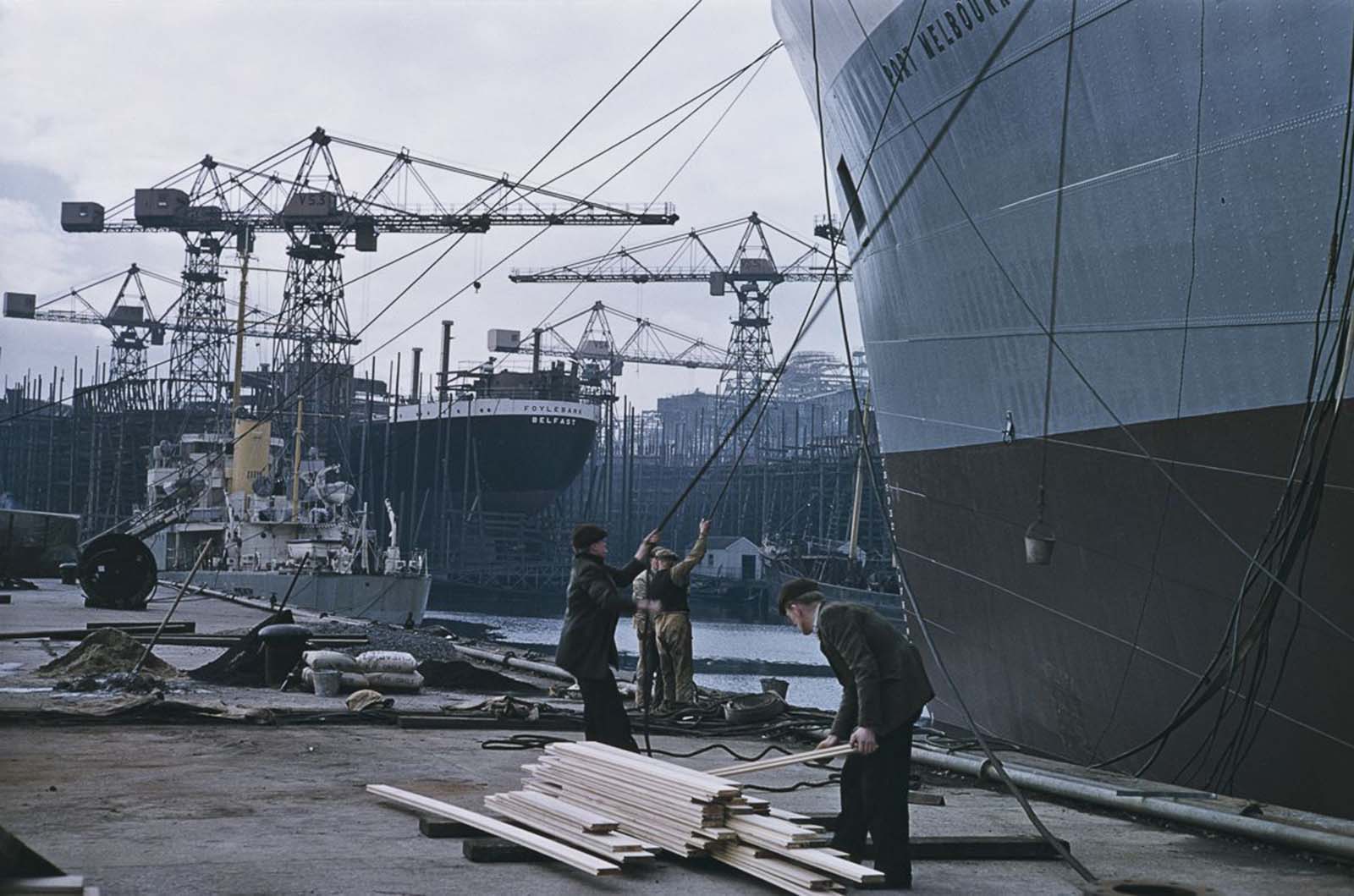 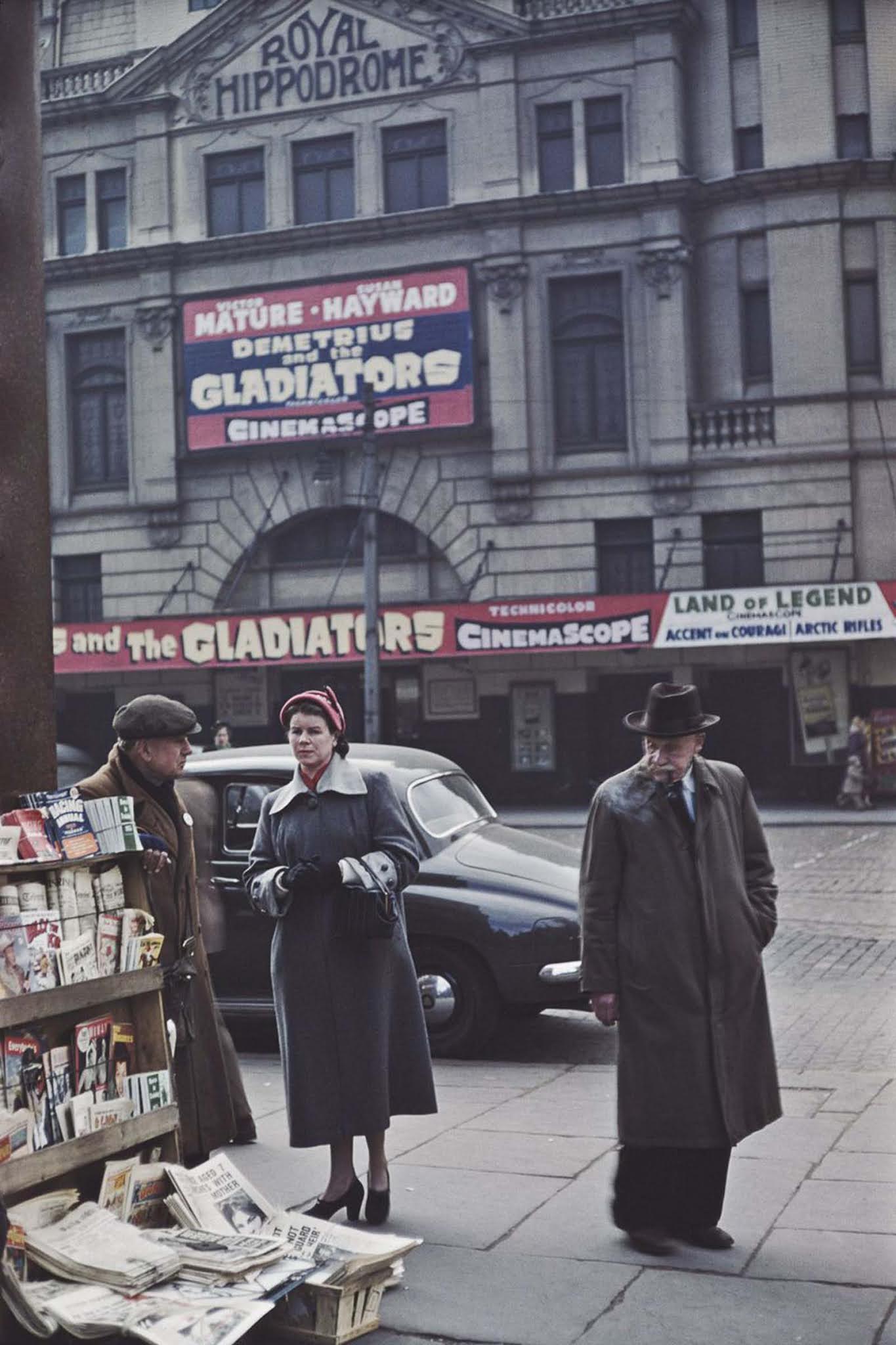 Customers at a news stand opposite the Royal Hippodrome cinema on Victoria Street. 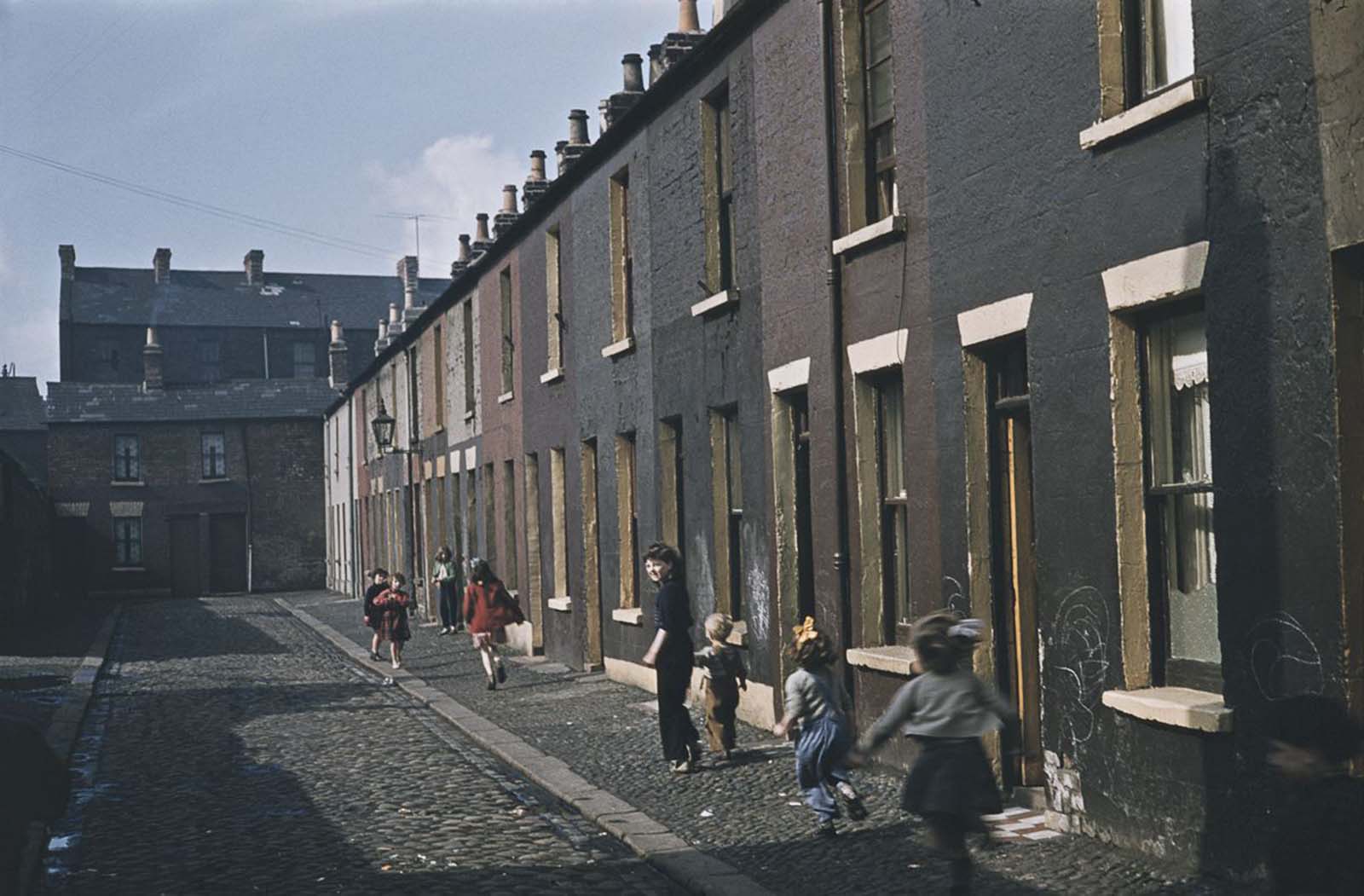 A group of children on a terraced street in Belfast. 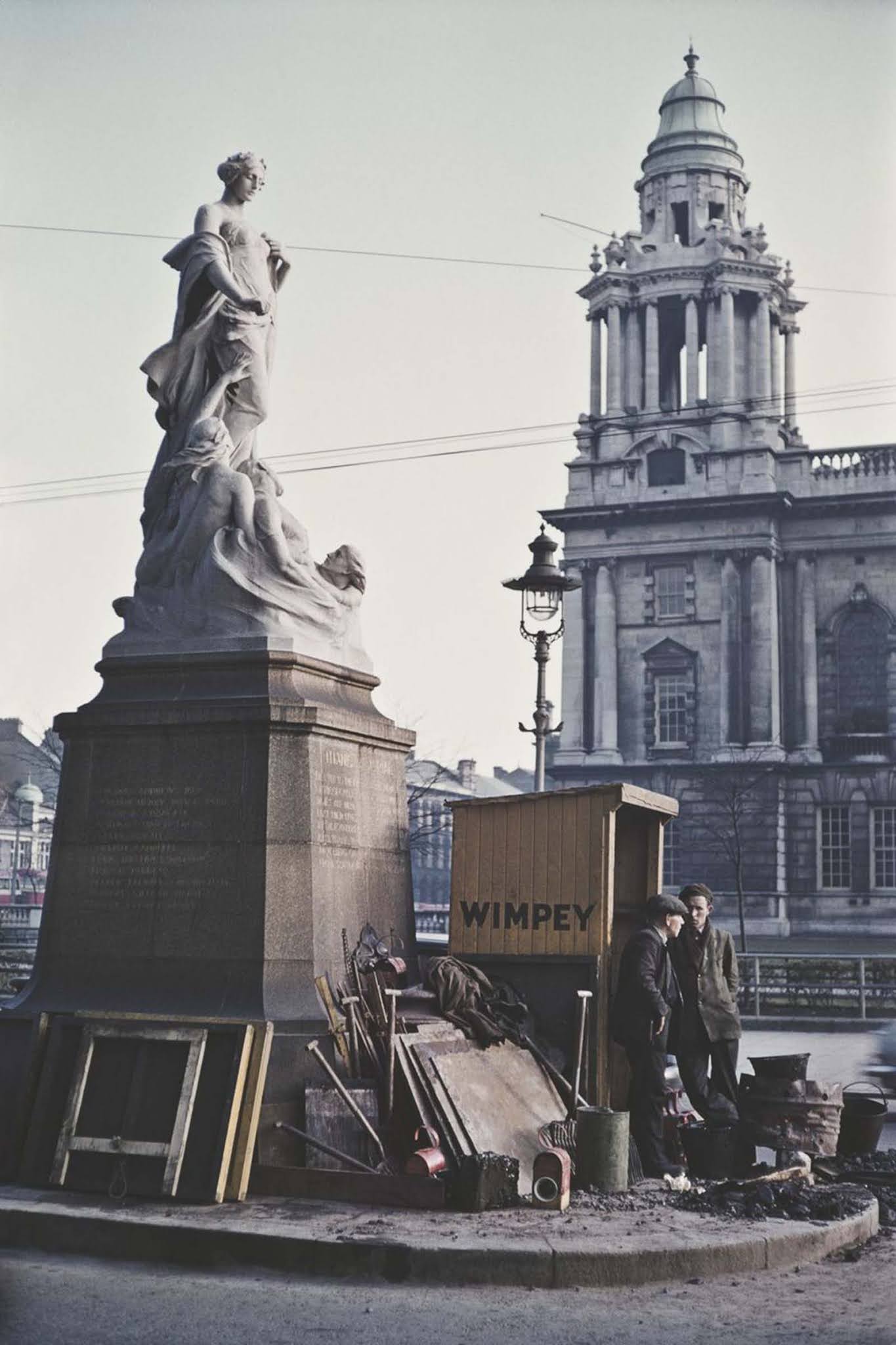 Two workmen by the Titanic Memorial outside Belfast City Hall. 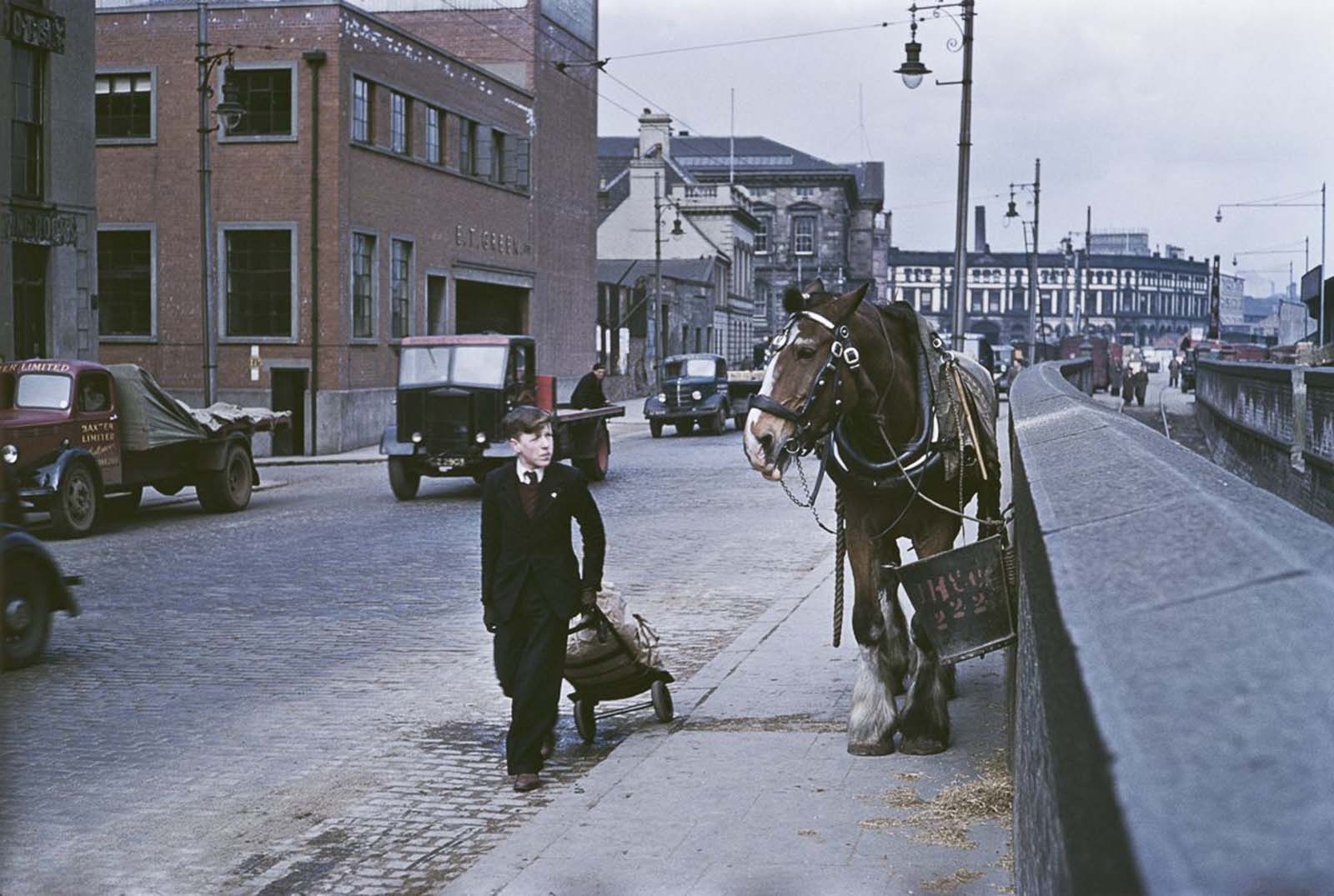 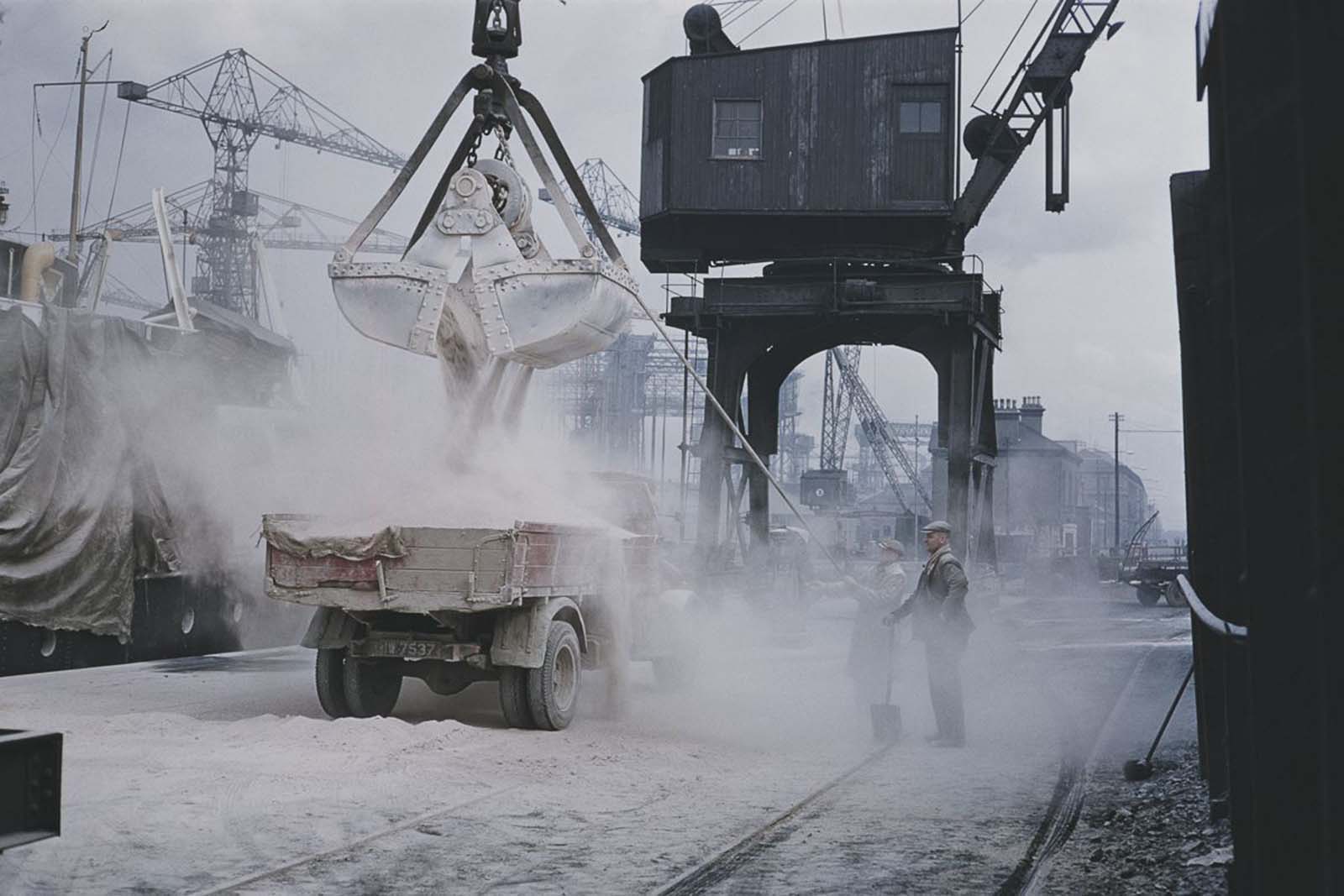 A crane loads a truck on the quayside at the Harland & Wolff shipyard. 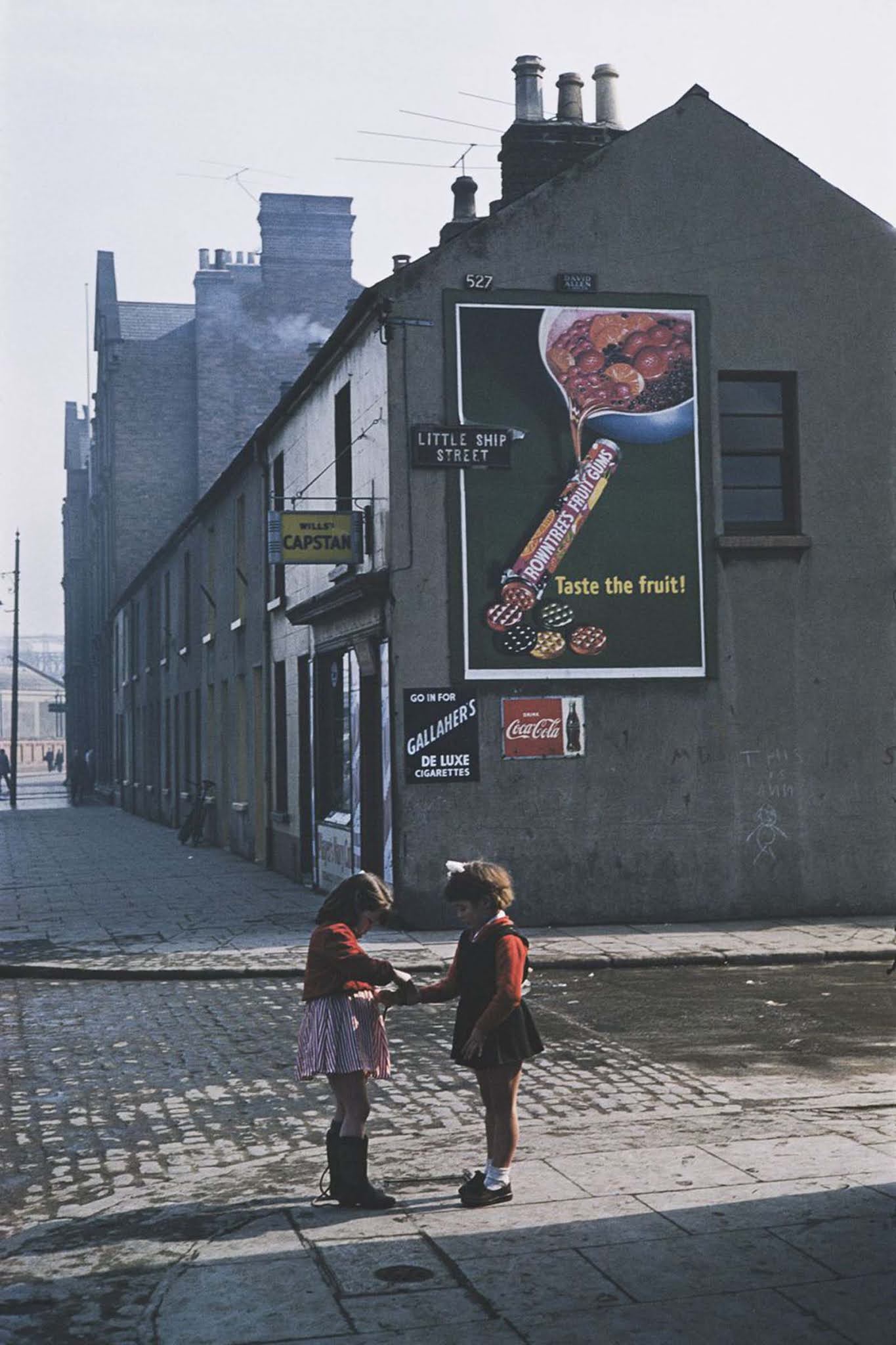 Two girls on the corner of Little Ship Street. 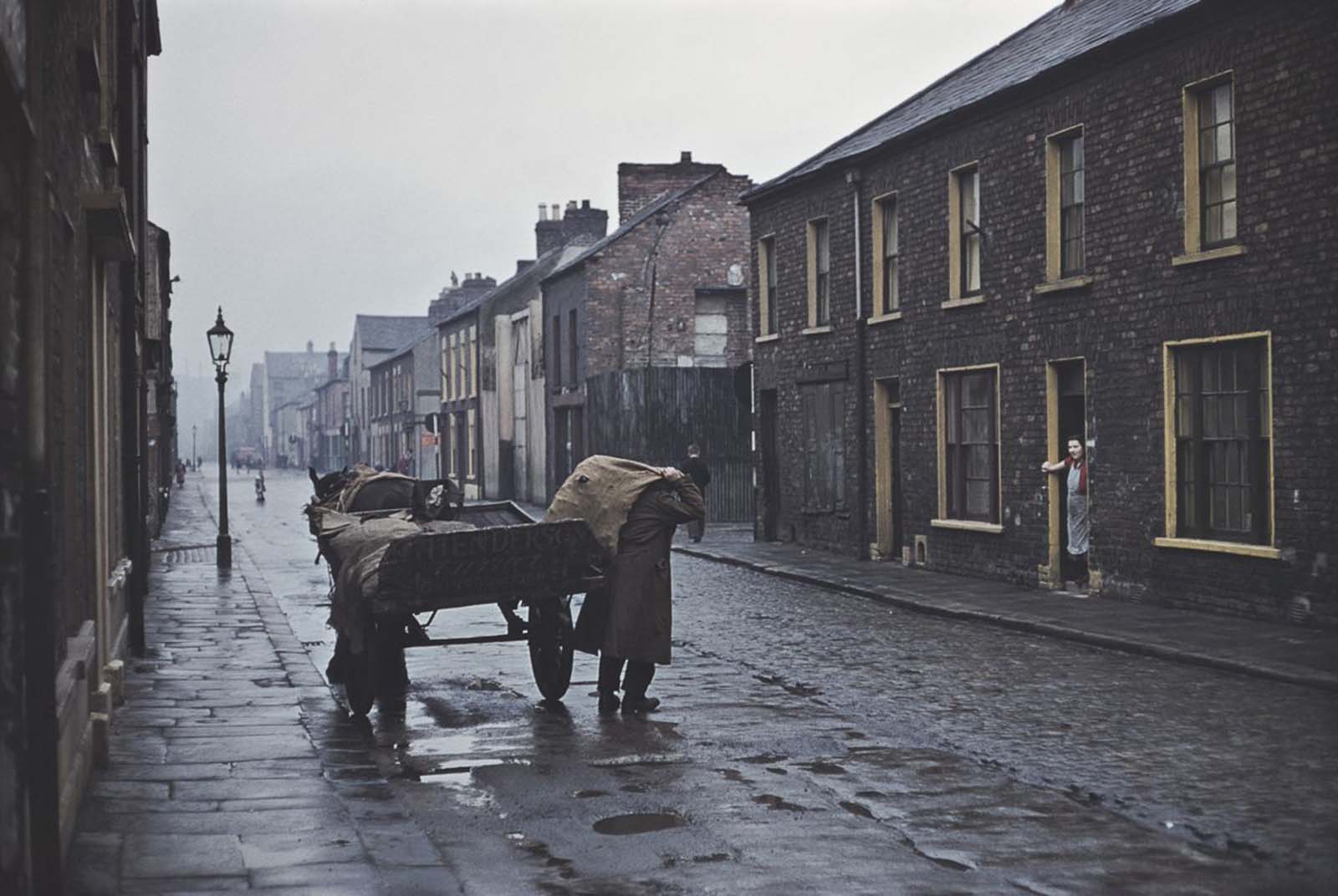 A man delivers sacks of coal from a horse and cart. 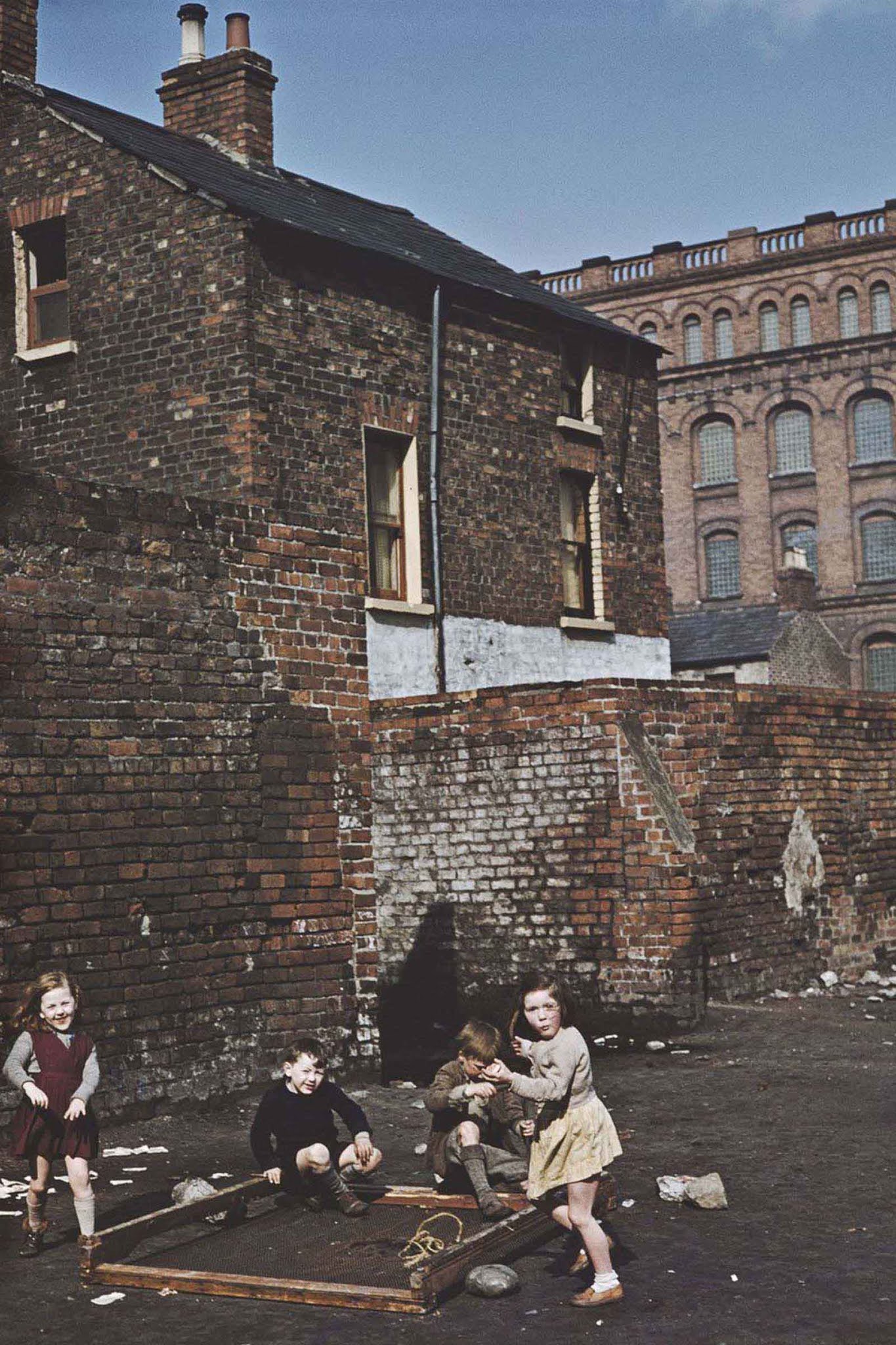 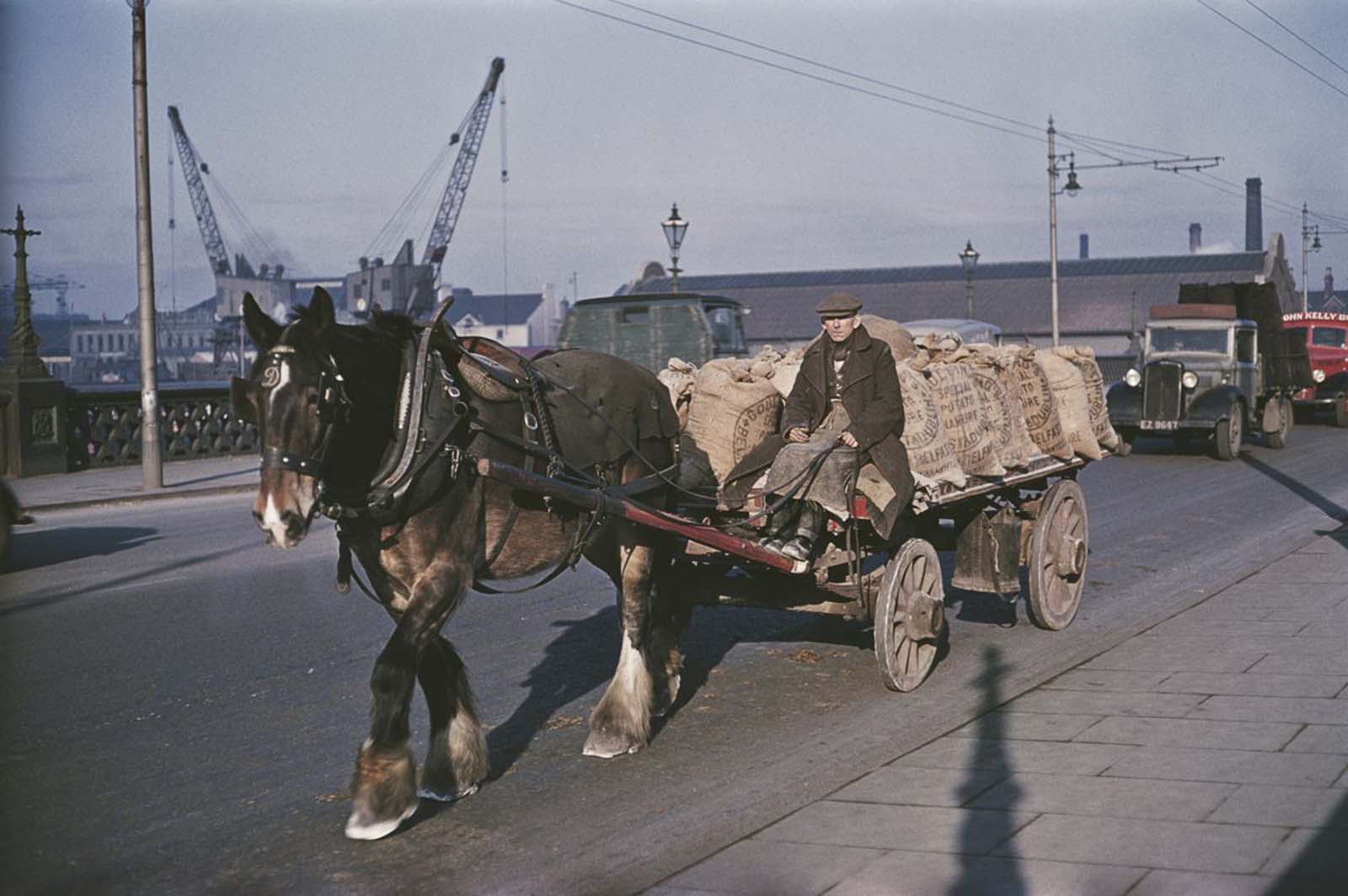 A cart carrying potatoes crosses a bridge in Belfast.

A view down a street towards the Alhambra Theatre on Lower North Street. The theatre was destroyed by fire and demolished in 1959. 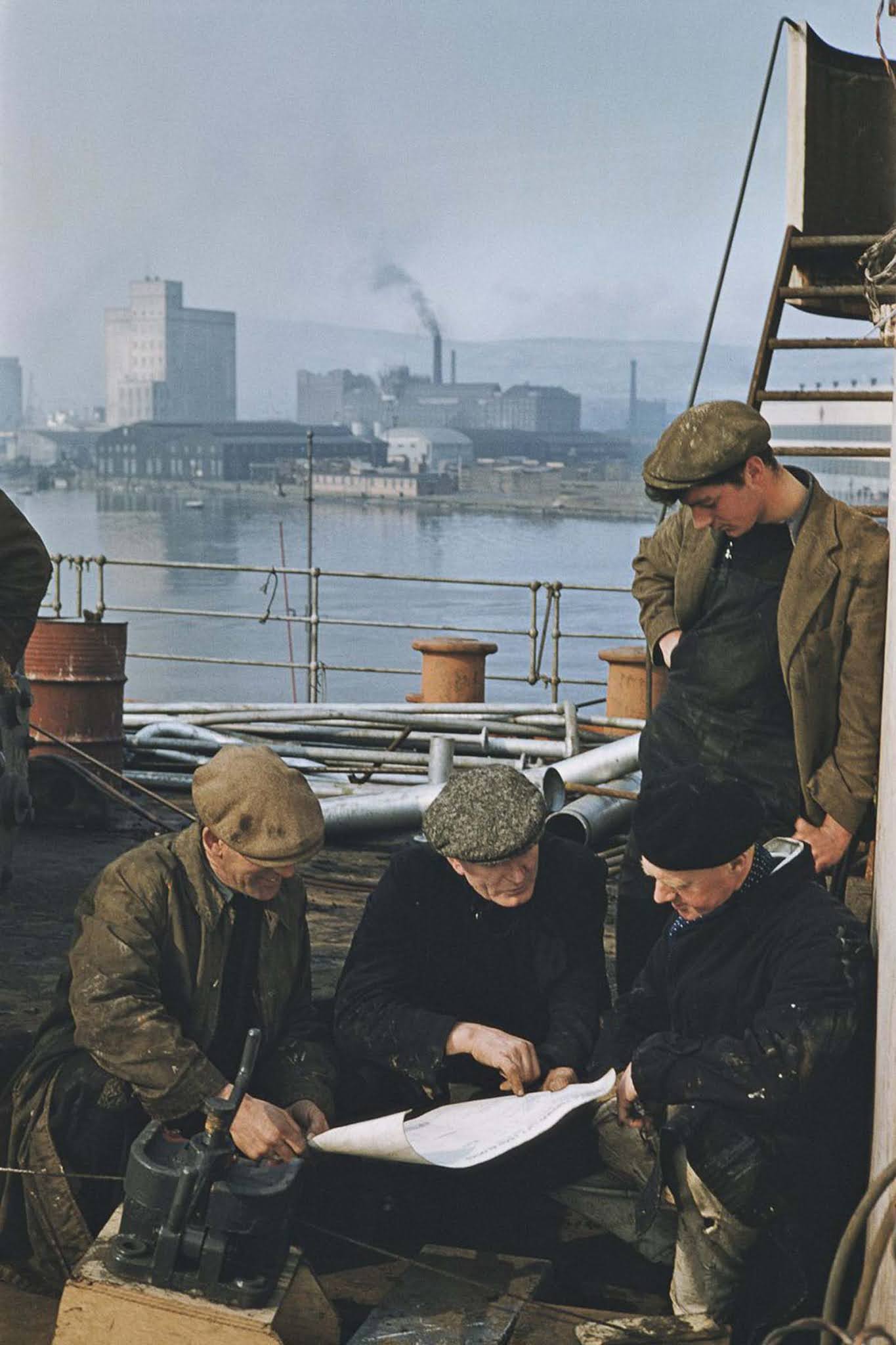 Workers at the Harland & Wolff shipyard. 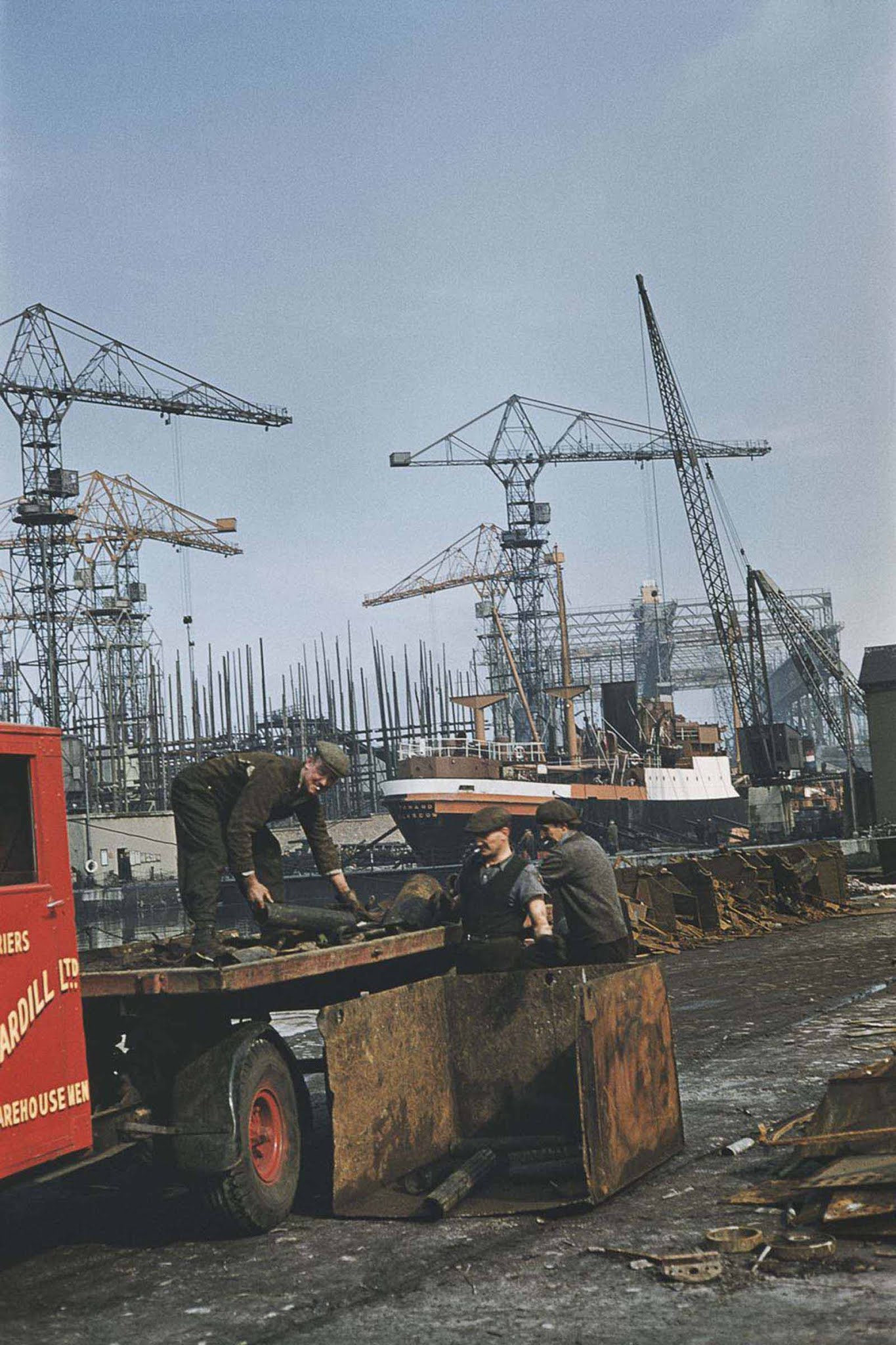 Workers on a truck at the Harland & Wolff shipyard. 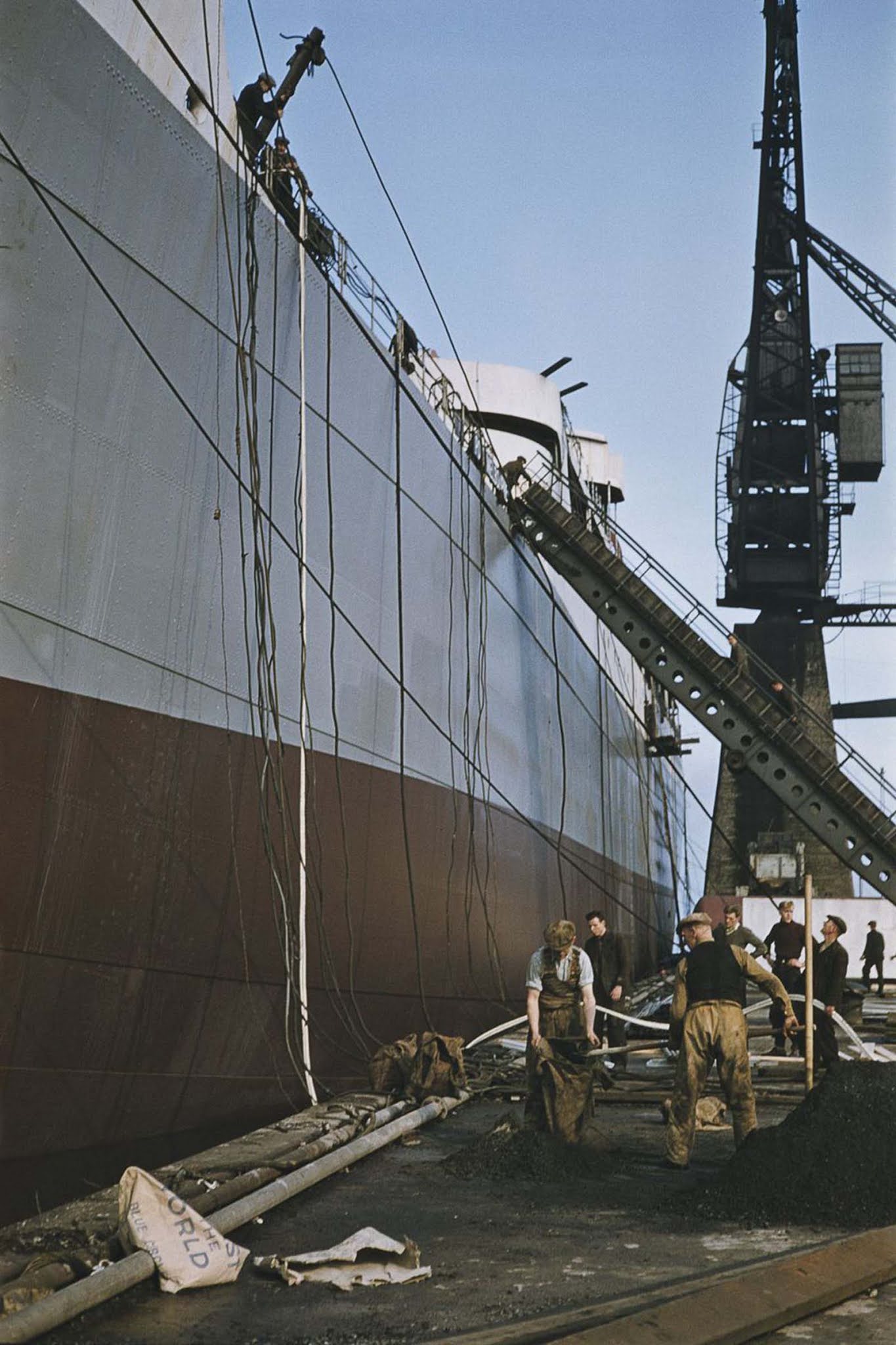 The cargo ship Port Melbourne under construction at the Harland & Wolff shipyard. The ship was later renamed Princess Danae. 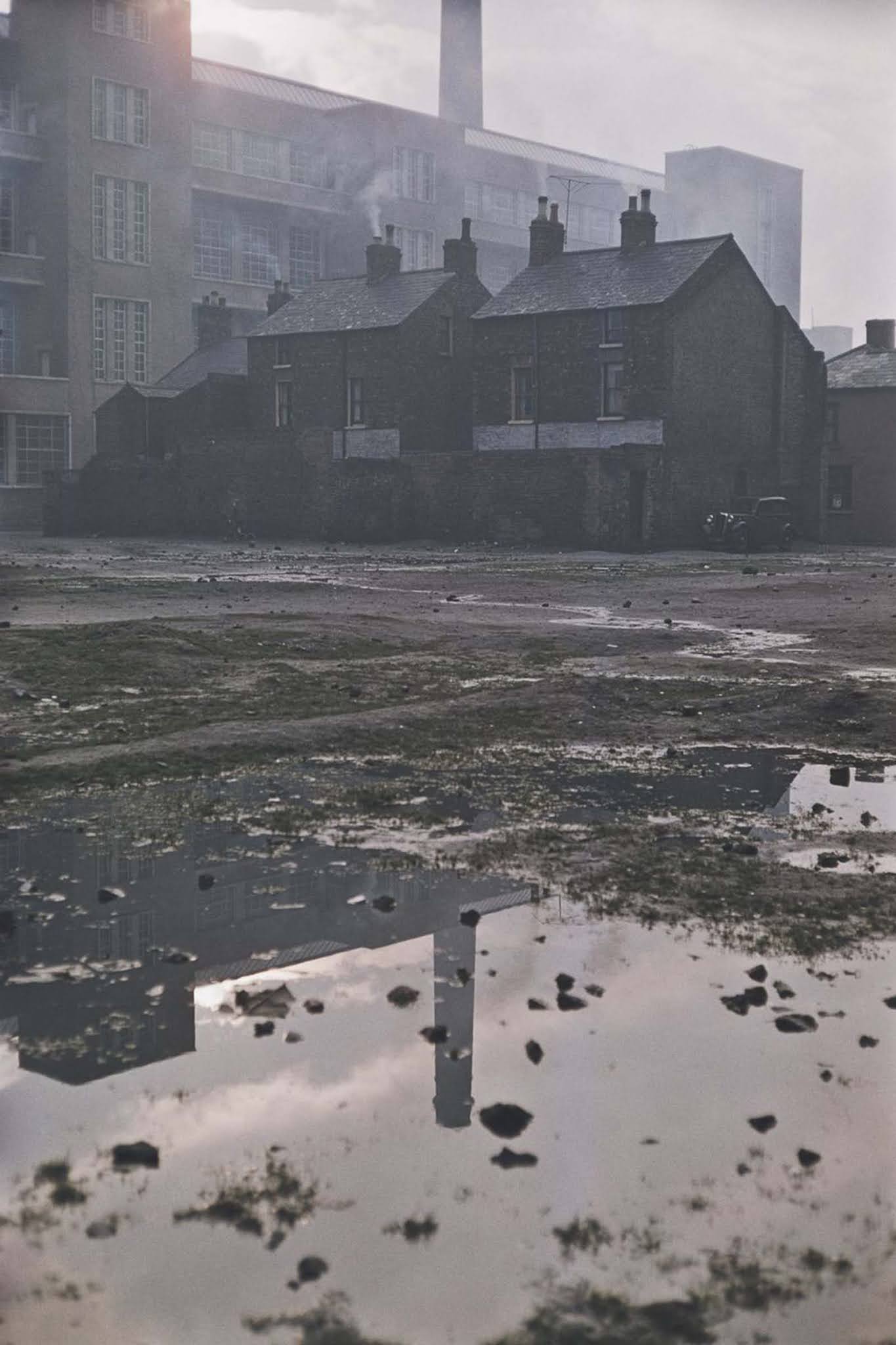 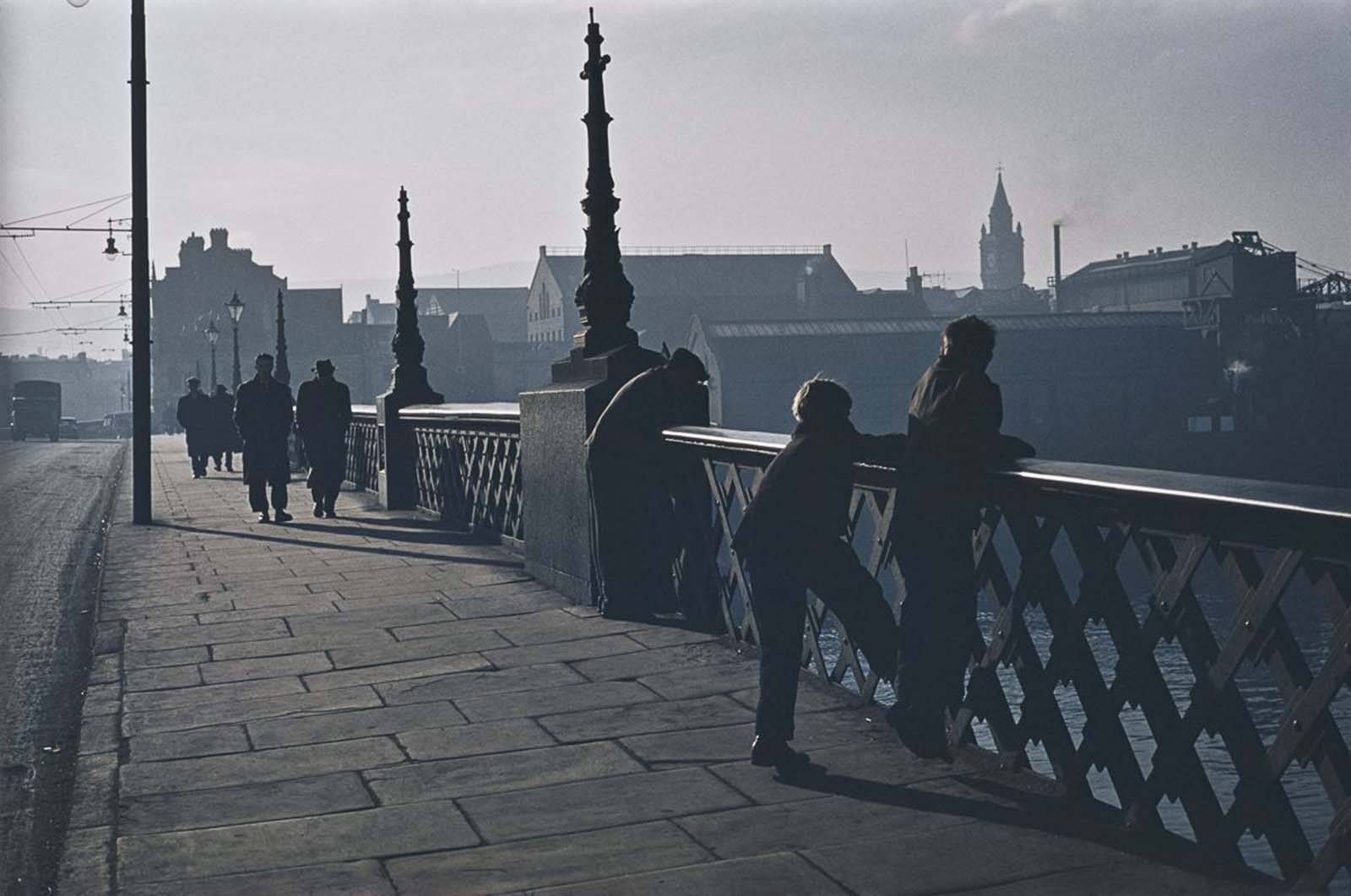 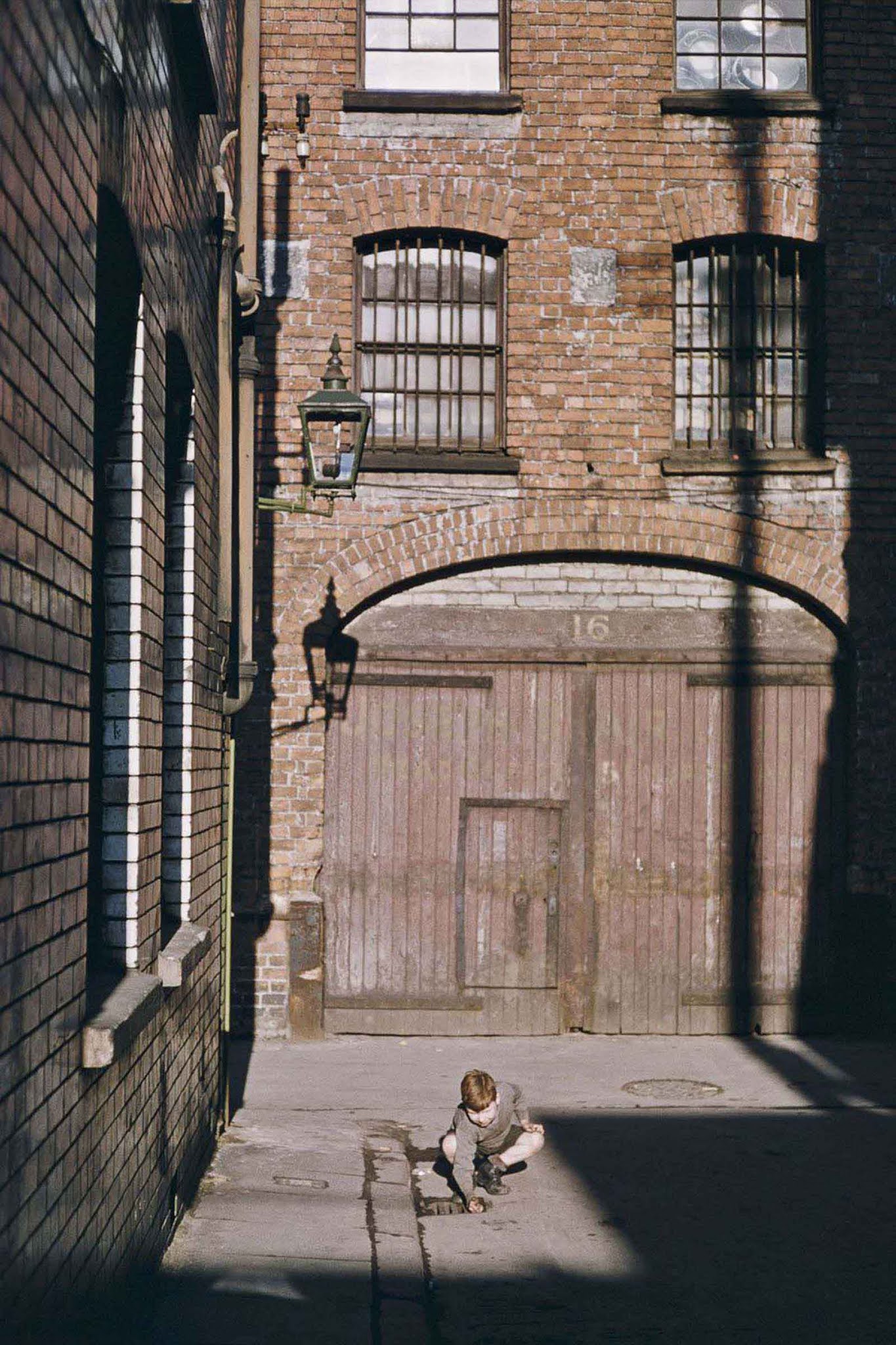 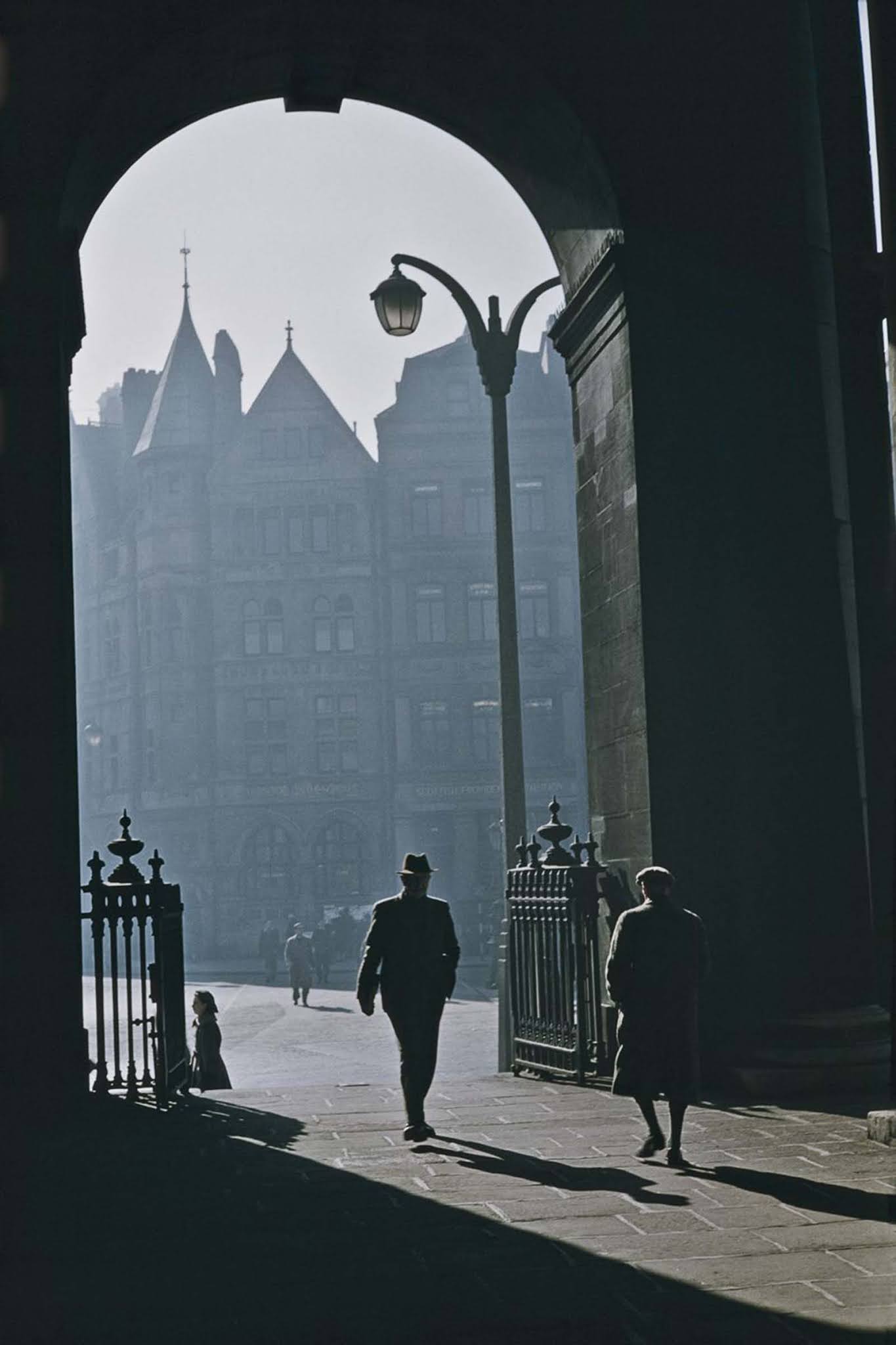 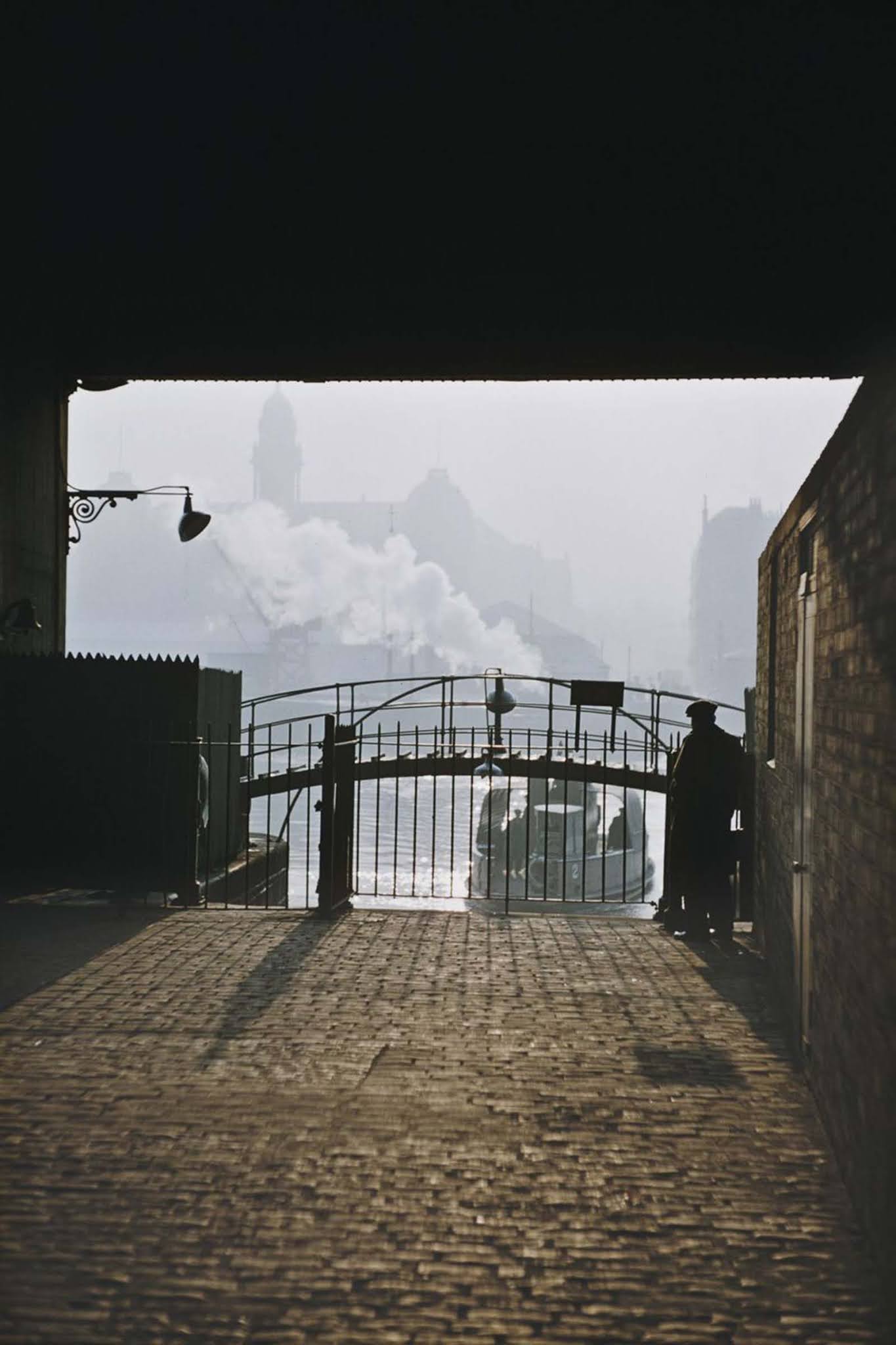 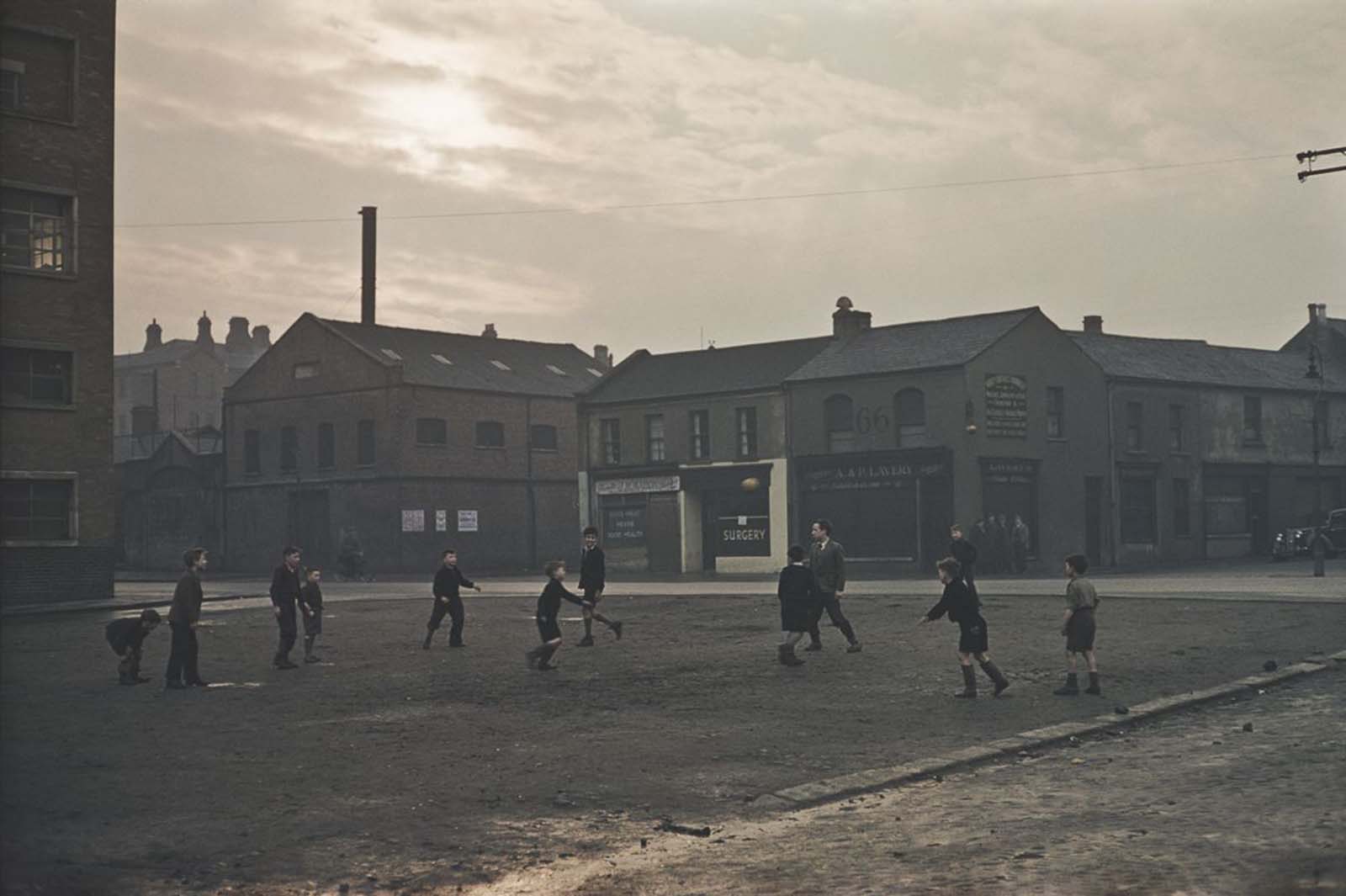 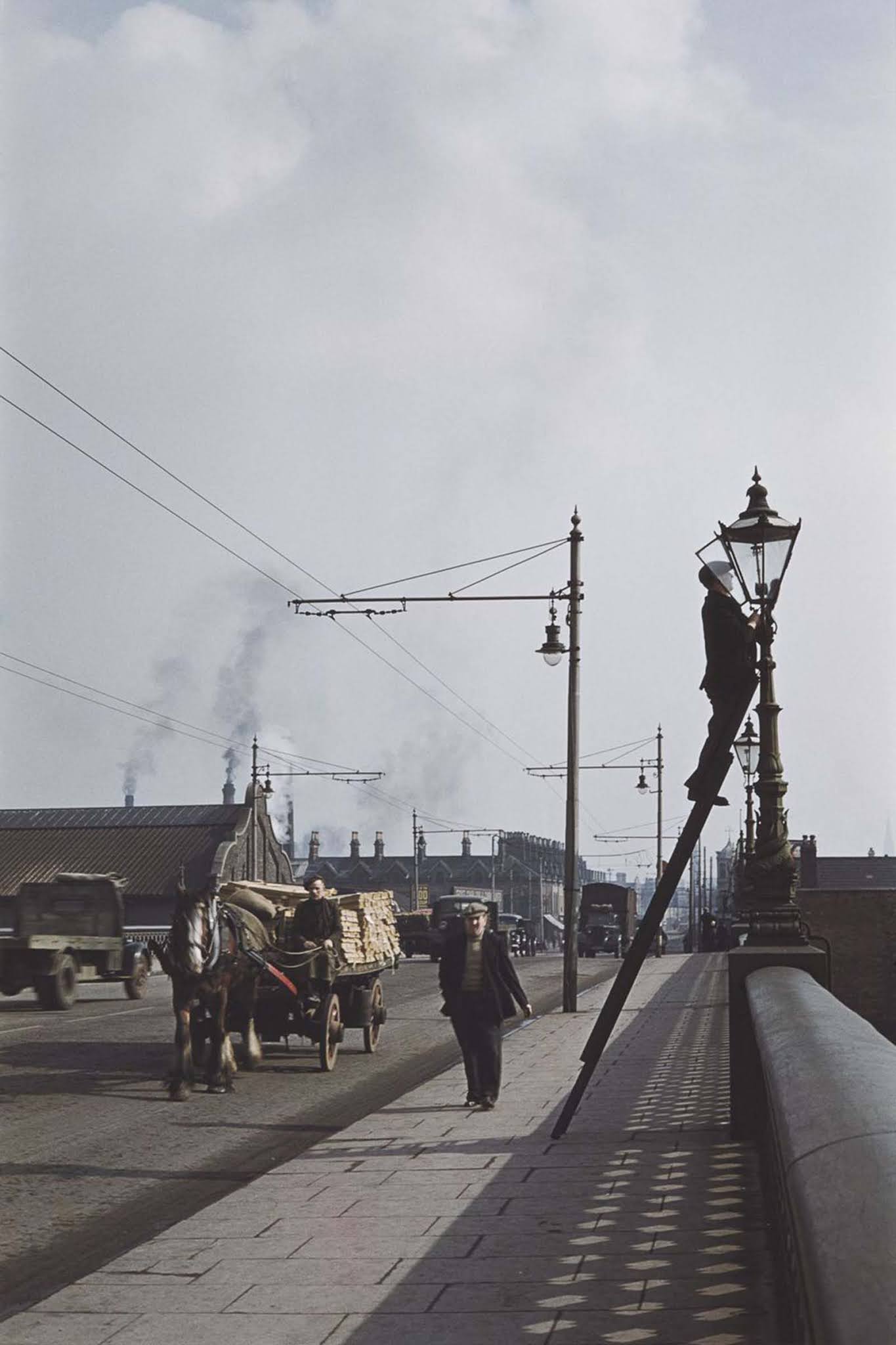 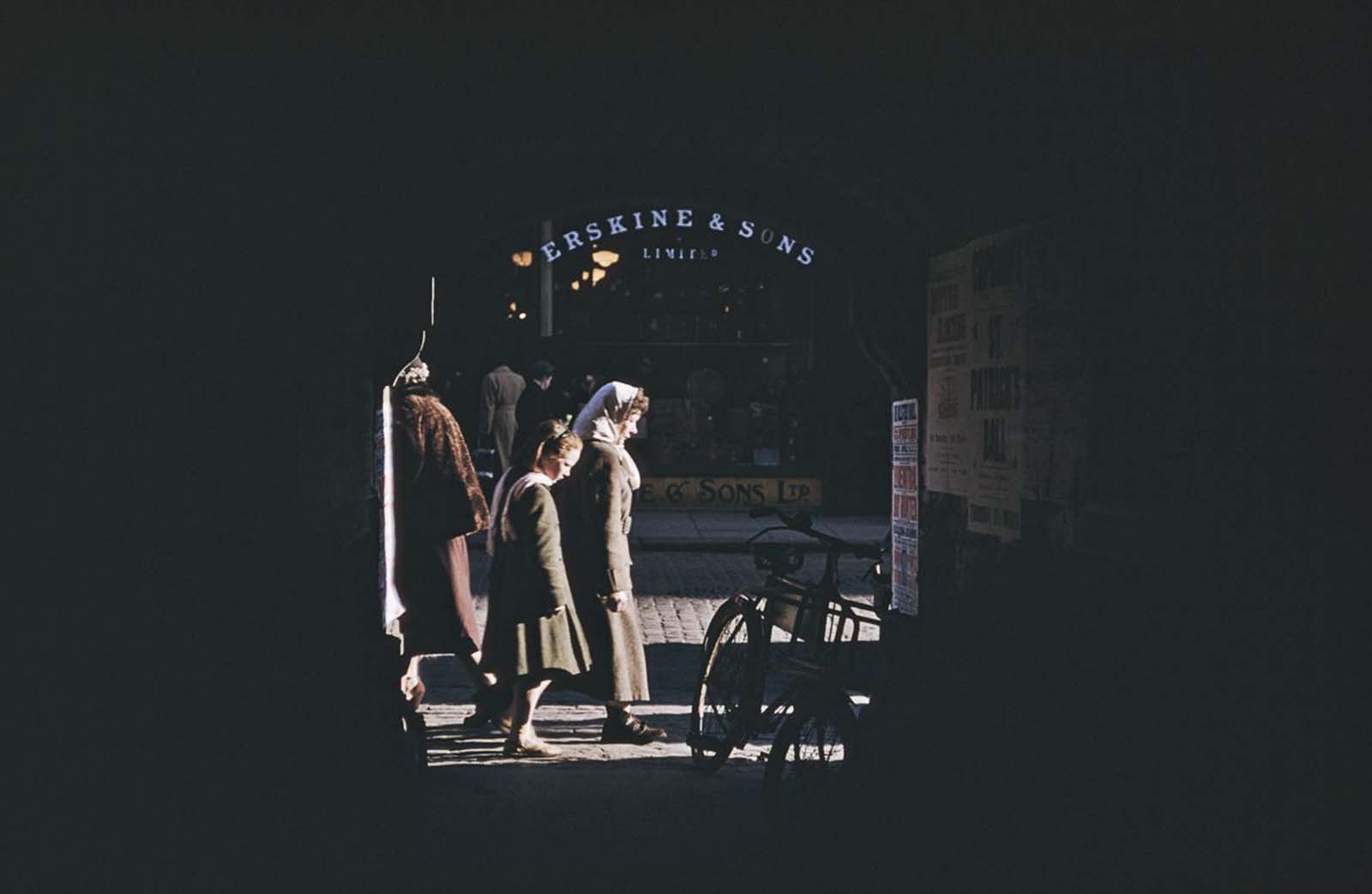 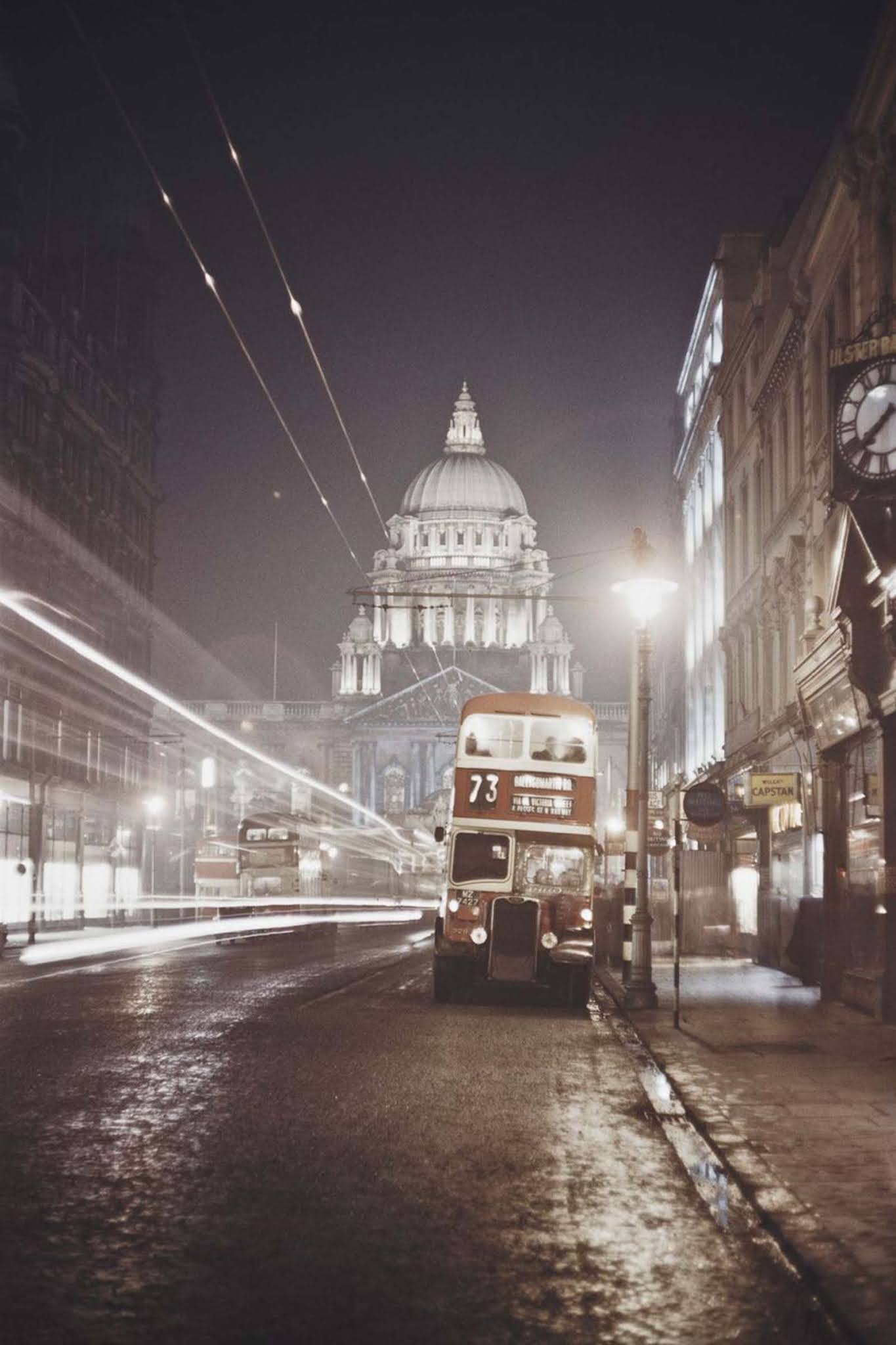 A number 73 bus to Ballygomartin Road on Linenhall Street, with Belfast City Hall in the background. 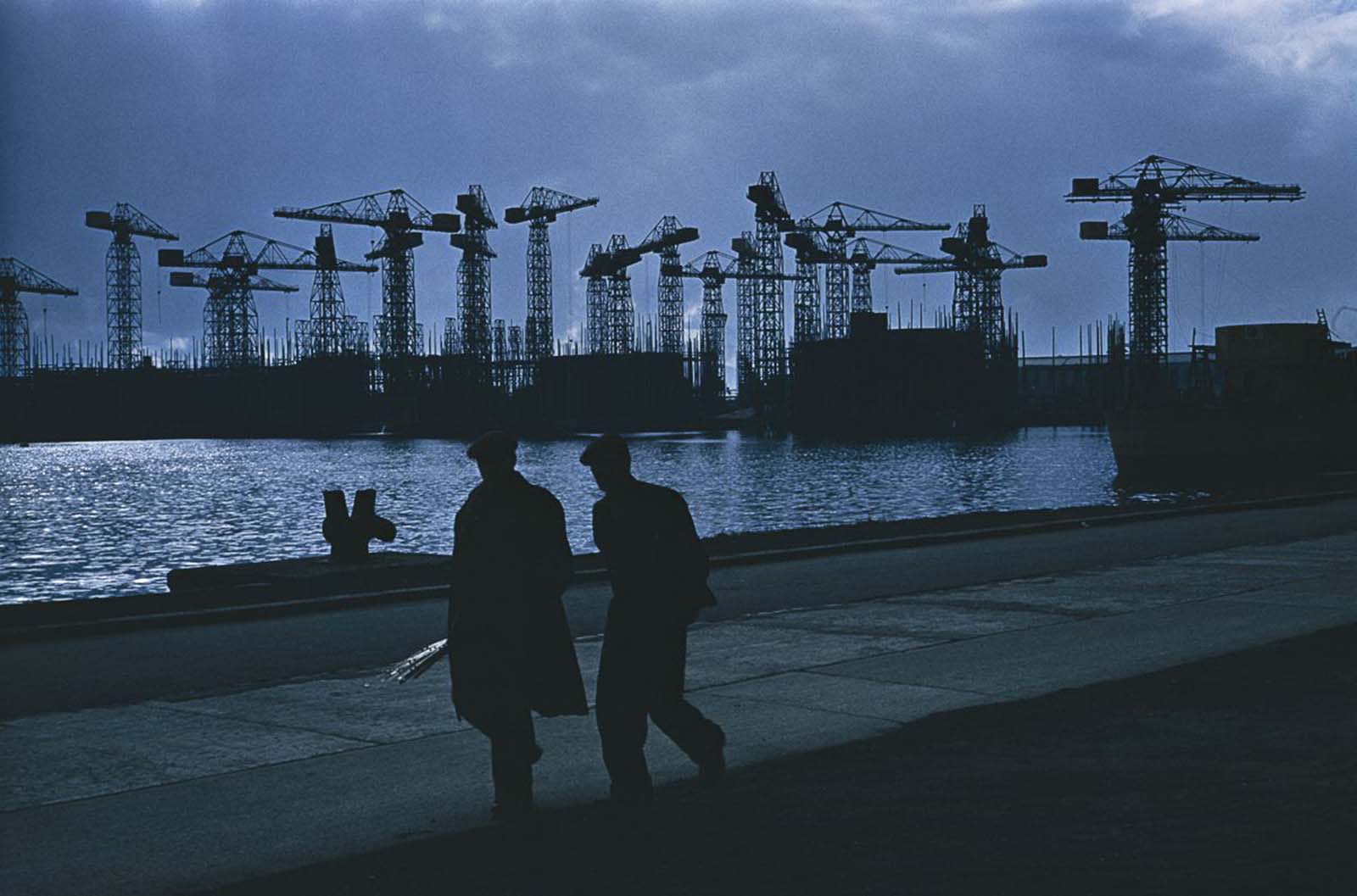 Two men on the quayside at the Harland & Wolff shipyard.