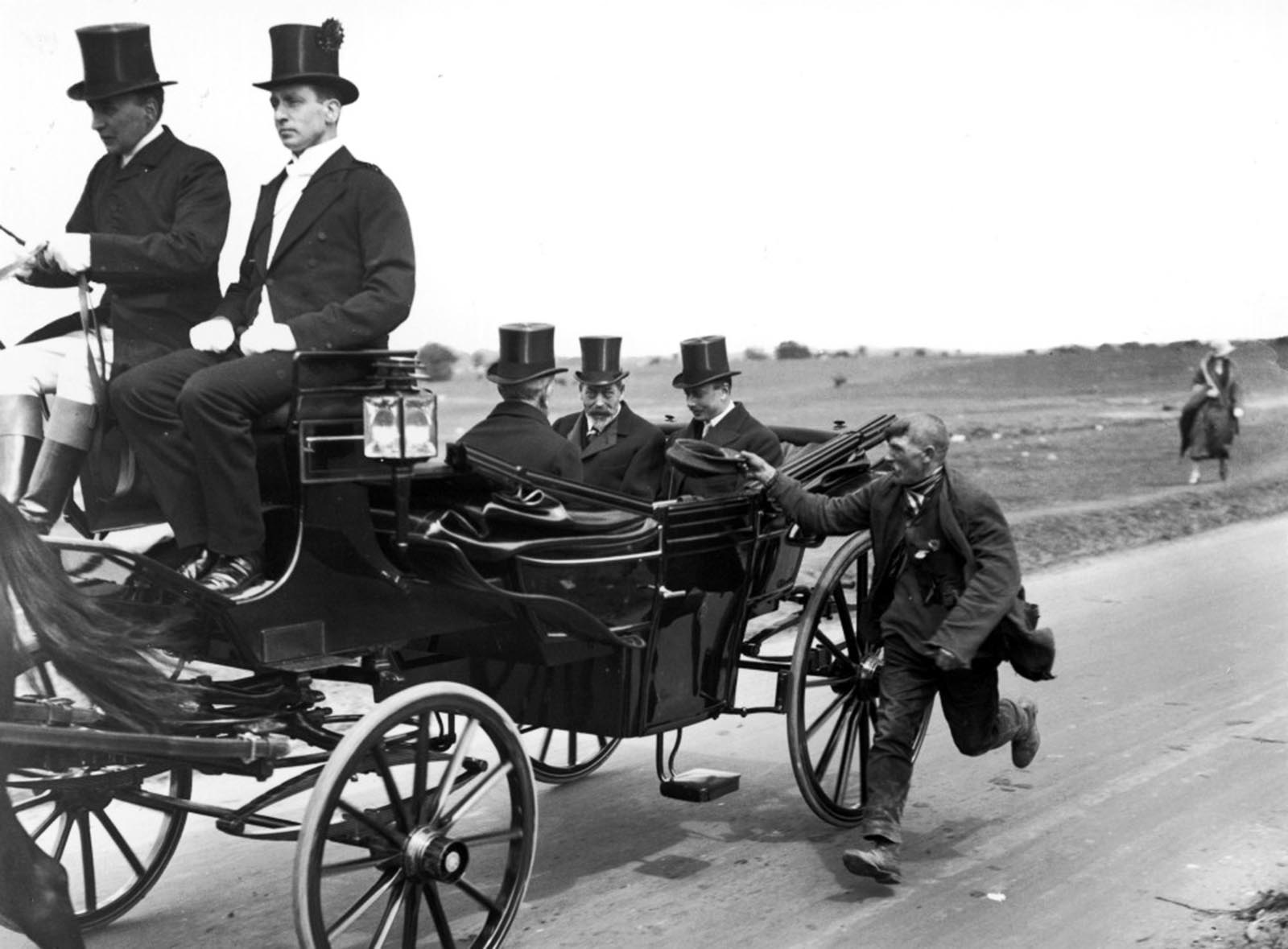 King George V. Photograph, taken in the early 1920’s showing a beggar soliciting money form the royal party as he runs alongside their carriage. The occupants look embarrassed.

It’s surprising that anyone could get so close to the king, considering that just six years ago Archduke Ferdinand had been assassinated by a man running up to his carriage, triggering World War One. The photograph shows King George V, the King-Emperor, driving to the Derby at Epsom in 1920 without a single policeman or security man in view. A beggar is able to run alongside the carriage and thrust his cap under the nose of Prince Henry, the Duke of Gloucester, one of the King’s sons. The medals just visible flapping on the man’s chest tell us he is an old soldier, so perhaps that is why the King and his companions show no alarm, guessing he is harmless. But there is no sign either that any of them is reaching for a coin to throw into the cap.

While at first glance, it may seem as though the running man is well dressed because of the nature of the clothes he is wearing (jacket with lapels, slacks, and what could be a scarf or necktie), a closer inspection will reveal a few things not so easily apparent.

Starting from top to bottom: the cap that the man is holding out is a derby or similar, which was considered much less formal than the top hats of the men in the carriage. The man’s overcoat is cut too loose, the wrinkling of the fabric suggests moderate to heavy wear, the cuffs are fraying, and the way that the lapels fold onto the jacket is indicative of a garment of poorer quality. Compare this jacket to the men in the carriage, whose jackets are crisp and clean, with relatively few wear patterns and elegant folds. The jackets themselves are cut cleaner, look thicker, and, in one case, contain a two-tone pattern on the lapel (which looks to be wool). The running man’s slacks have seen heavy wear and his shoes (while they aren’t exactly highlighted in the picture) are certainly not new either. His haircut provides enough hair to poke out the front of a hat and look gentlemanly, but enough shaved off the back to avoid lice.