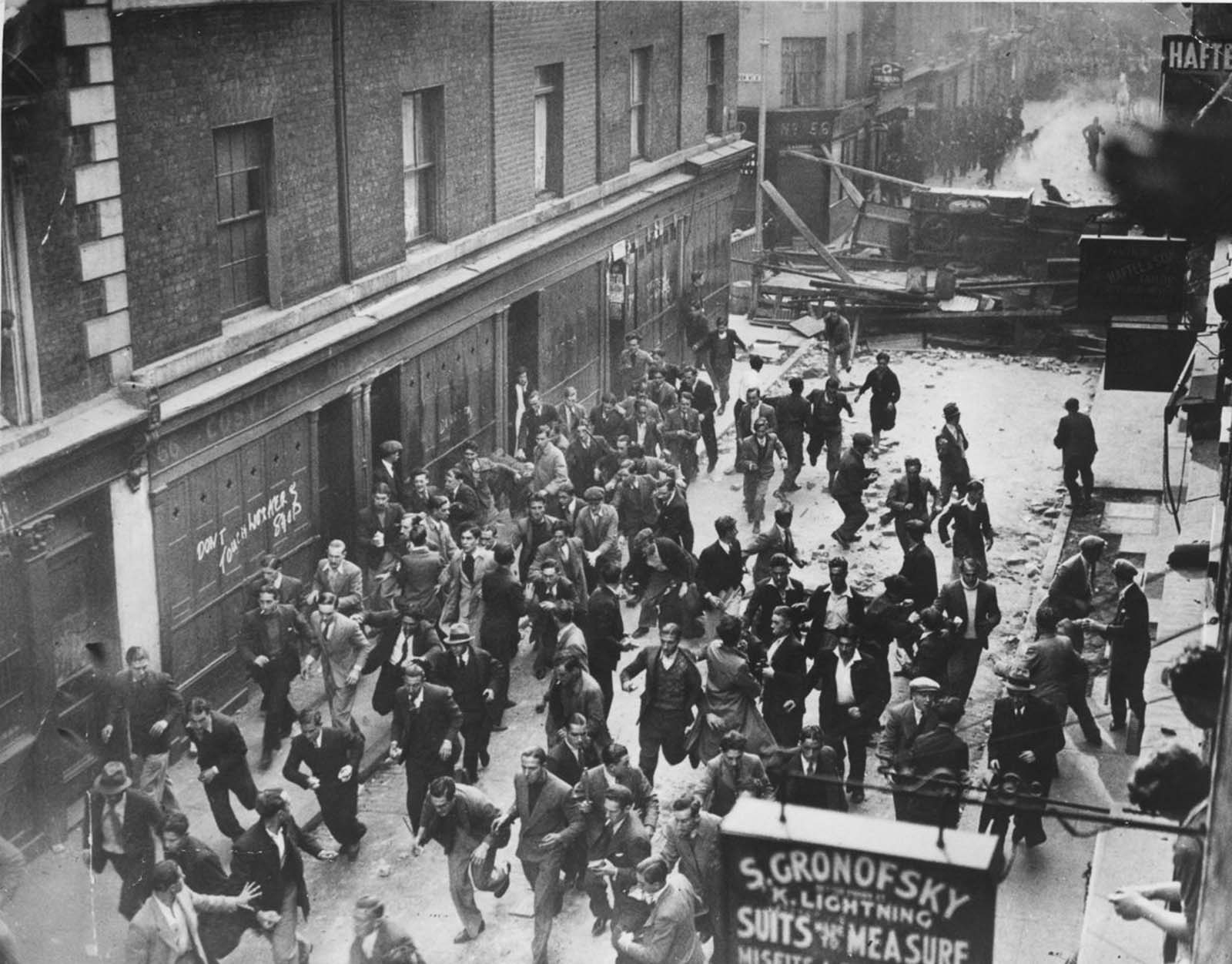 The Battle of Cable Street was a clash between anti-fascist protestors and the British Union of Fascists on Sunday 4 October 1936. The BUF was an organization inspired by Mussolini’s Blackshirts, and allegedly included 50,000 members at its height before being banned in 1940.

The plan of British Fascists led by Oswald Mosley was to send thousands of marchers dressed in their Blackshirt uniform through the heart of the East End (an area which then had a large Jewish and Irish population).

Around 100,000 residents petitioned the Home Secretary to ban the march, but he refused on the grounds of free speech. The government sent a police escort in an attempt to prevent anti-fascist protesters from disrupting the march.

The anti-fascist groups built roadblocks in an attempt to prevent the march from taking place. The barricades were constructed near the junction with Christian Street, towards the west end of this long street.

An estimated 100,000 anti-fascist demonstrators turned out and were met by 6,000 police, who attempted to clear the road to permit the march of 2-3,000 fascists to proceed.

The protestors adopted the cry ‘They shall not pass’ in reference to Dolores Ibárruri’s, a Communist leader in the Spanish Civil War, comments on Franco’s invasion from Morocco. 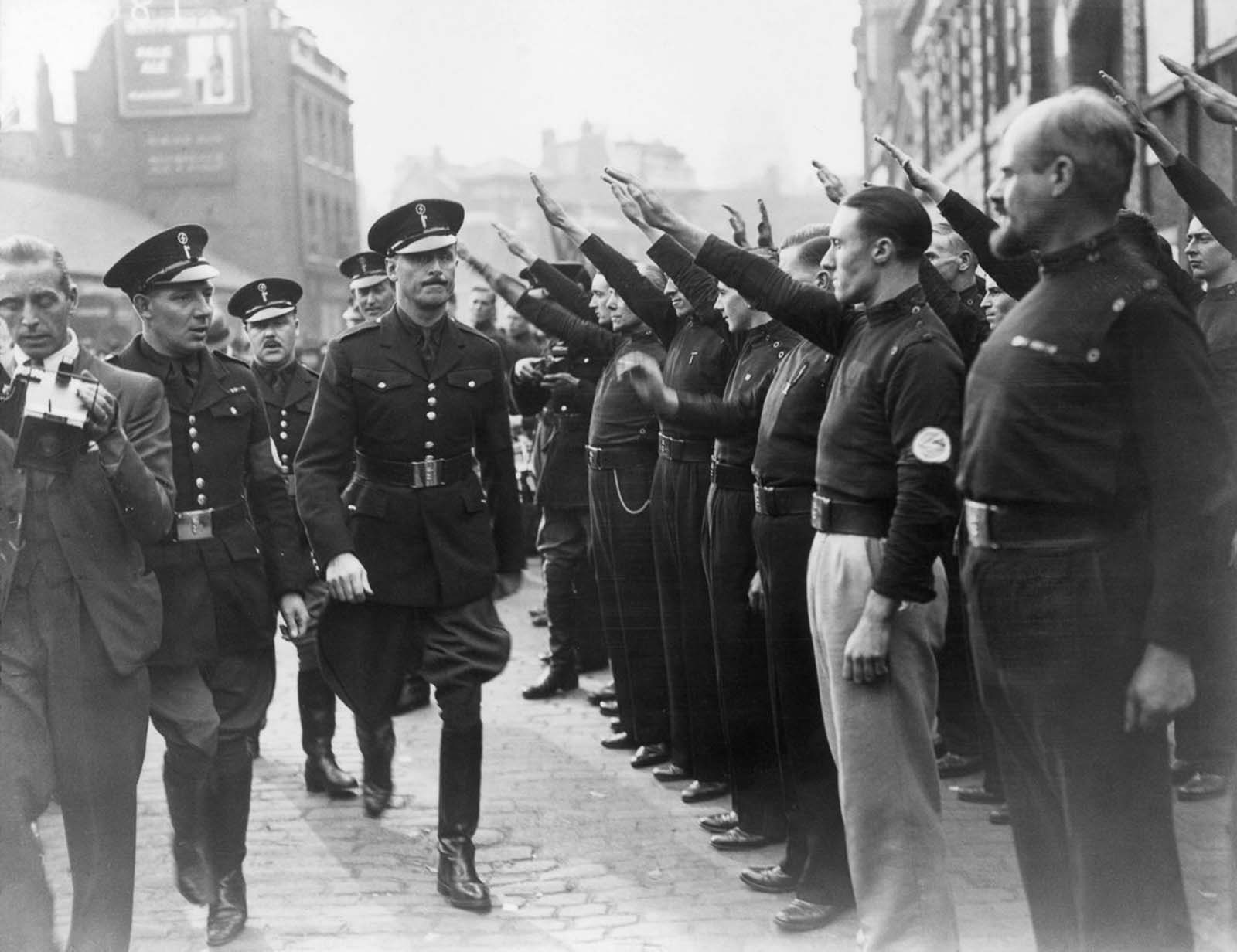 Bill Fishman, one of the anti-fascist protesters, recalled: “We all charged towards Cable Street. At the bottom end, an overturned lorry was used as a barricade and we blocked the road – Hasidic Jews with little beards and great strapping Irish dockers all standing together. People began to throw down their mattresses to block the street and a mass onslaught on the police ensued, with two officers even being taken hostage”.

The demonstrators fought back with sticks, rocks, chair legs, and other improvised weapons. Rubbish, rotten vegetables, and the contents of chamber pots were thrown at the police by women in houses along the street. After a series of running battles, Mosley agreed to abandon the march to prevent bloodshed. Around 175 people were injured, and 150 arrested.

The Battle of Cable Street was a major factor leading to the passage of the Public Order Act 1936, which required police consent for political marches and forbade the wearing of political uniforms in public. This is widely considered to be a significant factor in the BUF’s political decline prior to the Second World War.

Today the memory of this event is commemorated with a 330 square meters mural on the side of St George Town hall. Commissioned in 1976, the colorful mural was inspired by the famous Mexican mural artist- Diego Rivera.

The designers interviewed local people to inform the design and used a fisheye perspective to portray the battle, the banners, and the people who defended the community.

The mural stands in Cable Street, about 150 yards (140 m) west of Shadwell underground station. A red plaque in Dock Street commemorates the incident. 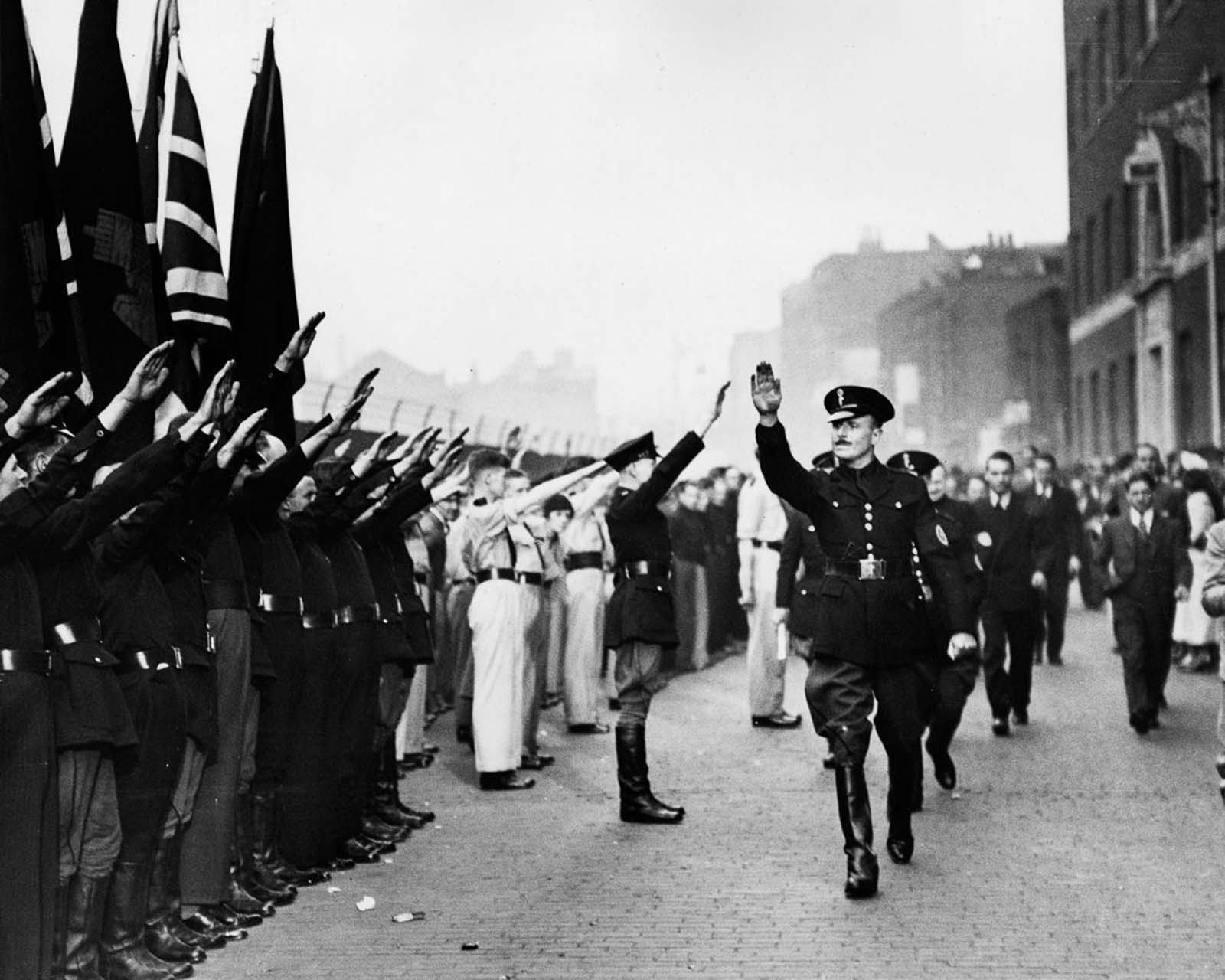 Oswald Mosley, the leader of the British Union of Fascists. 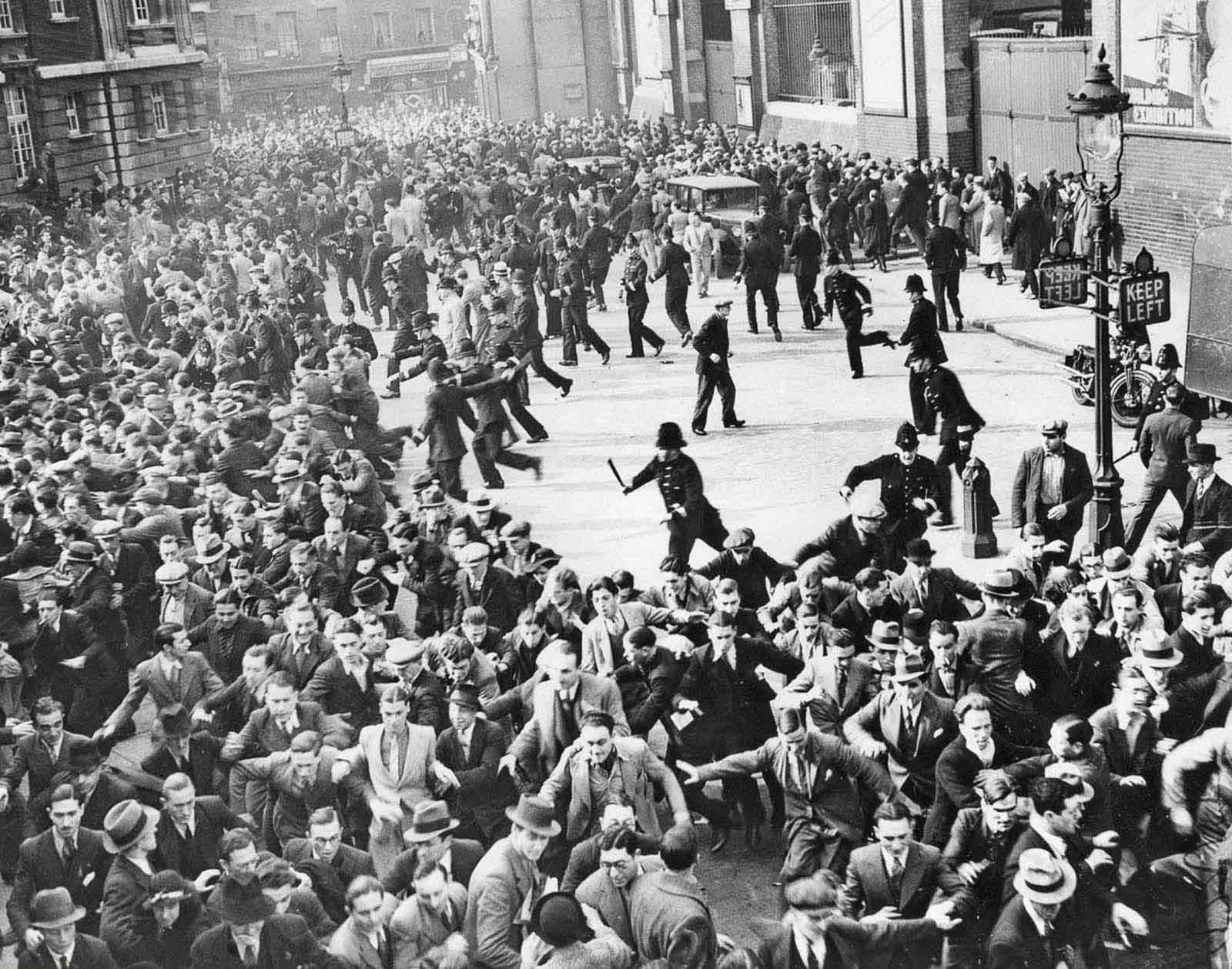 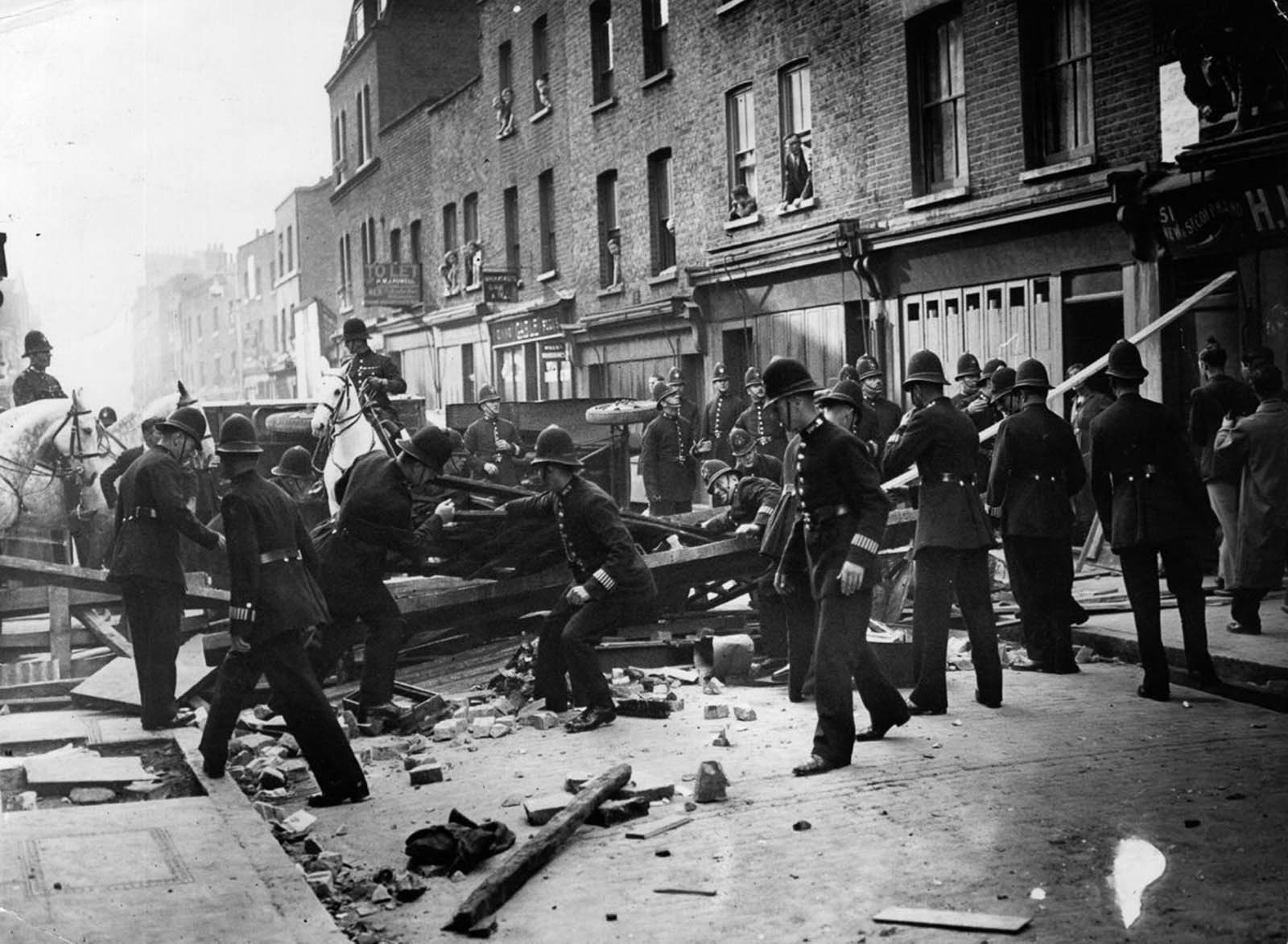 Police clear away a barricade erected by protesters to make way for the fascist marchers. 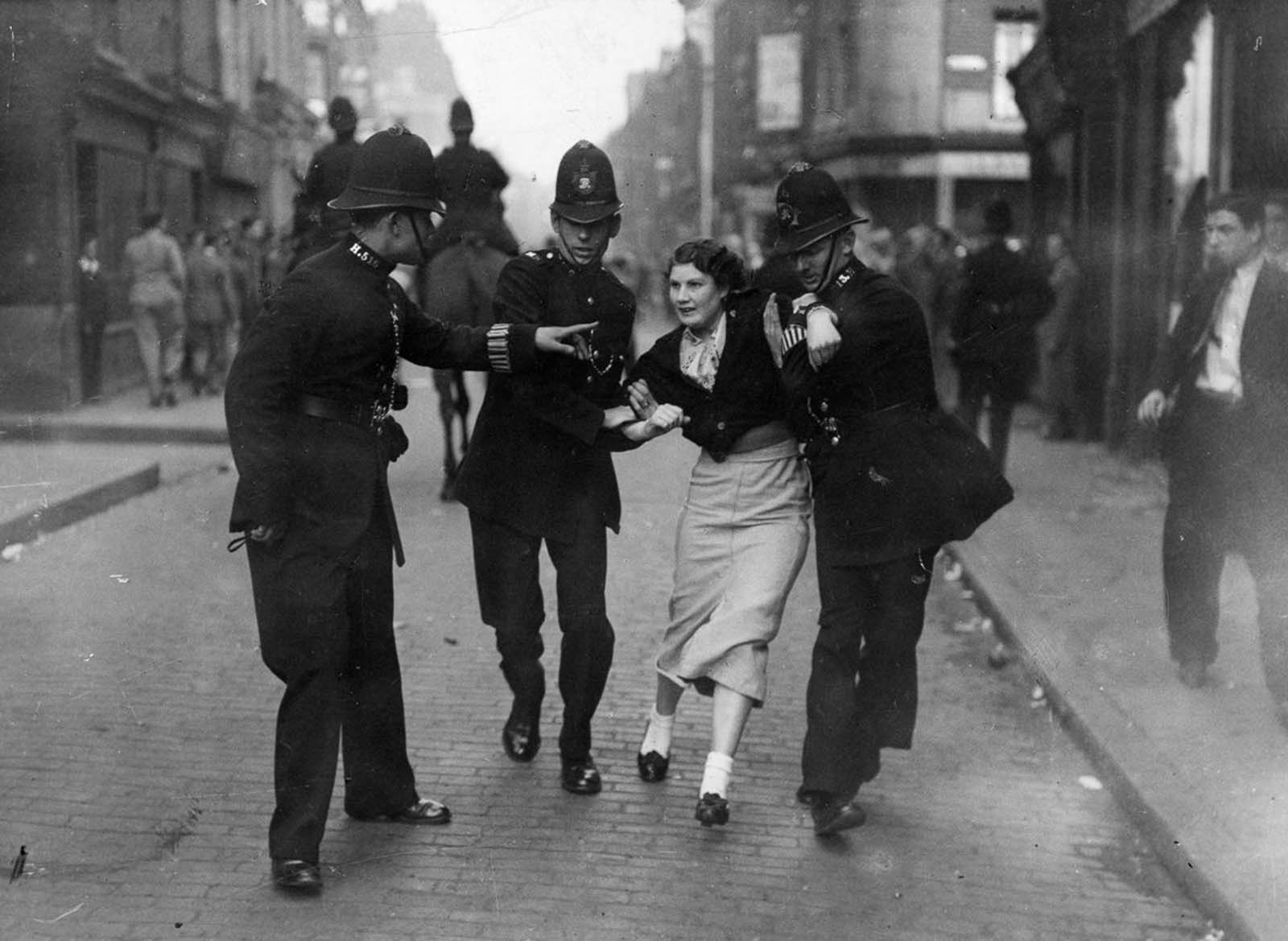 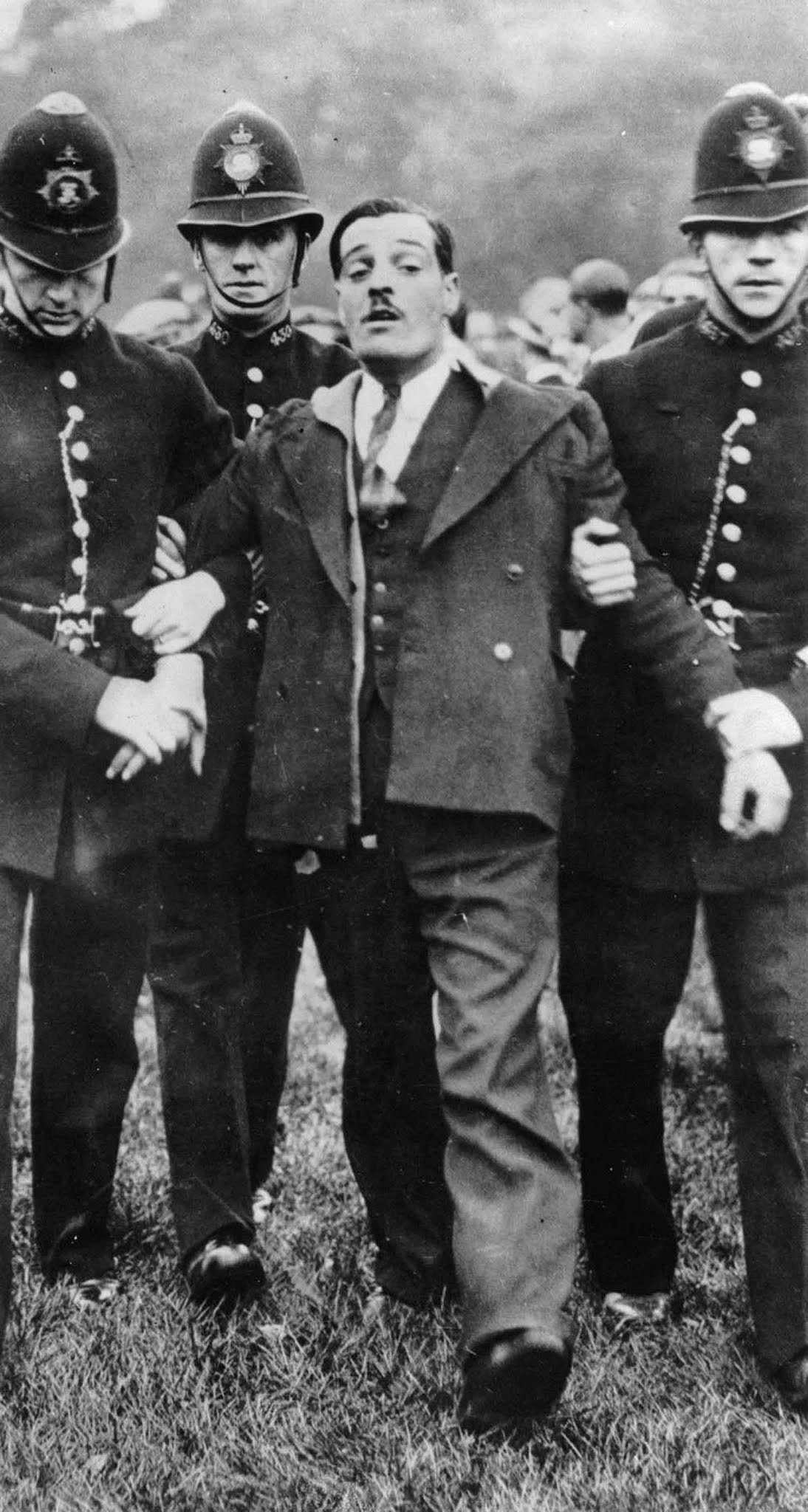 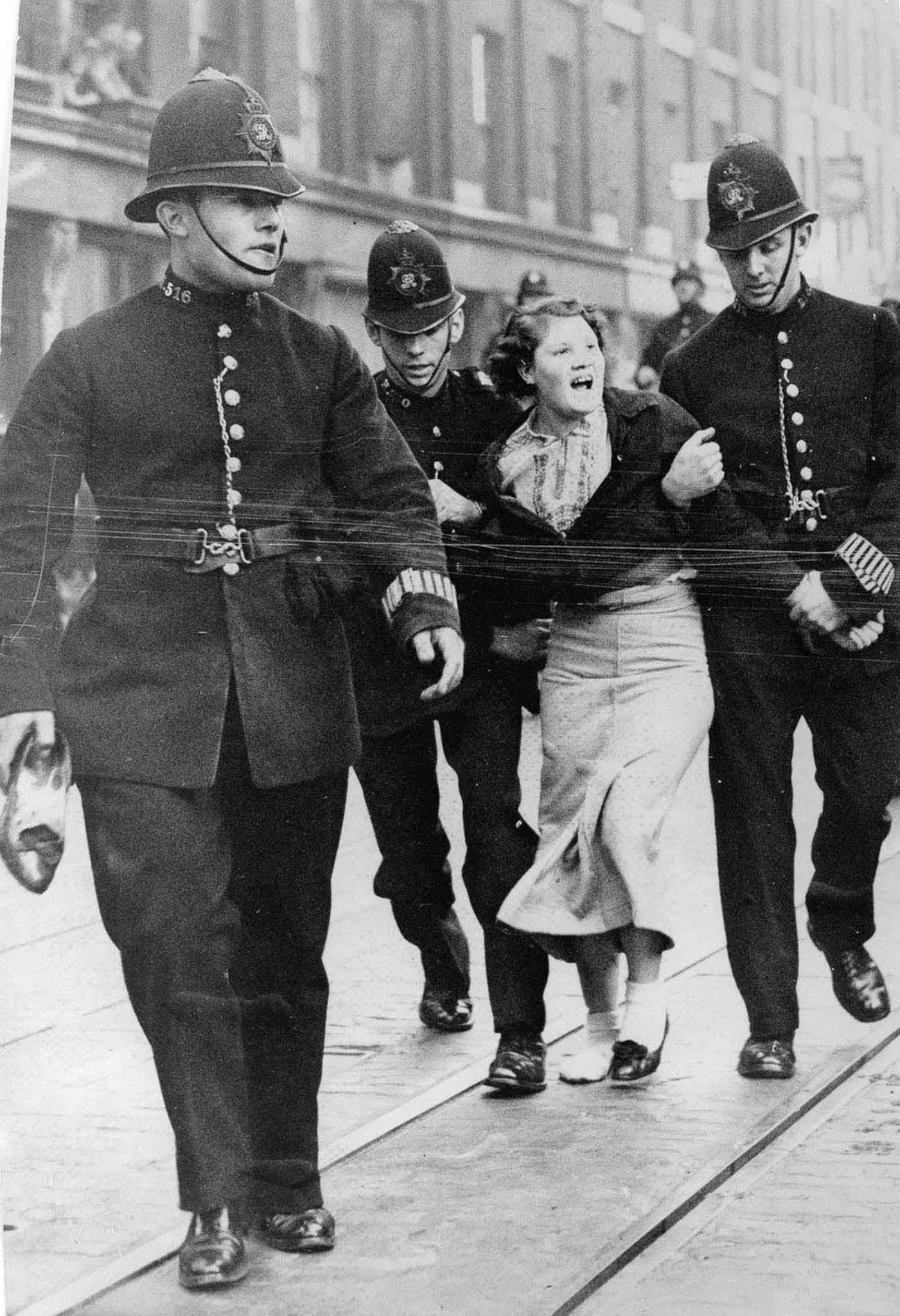 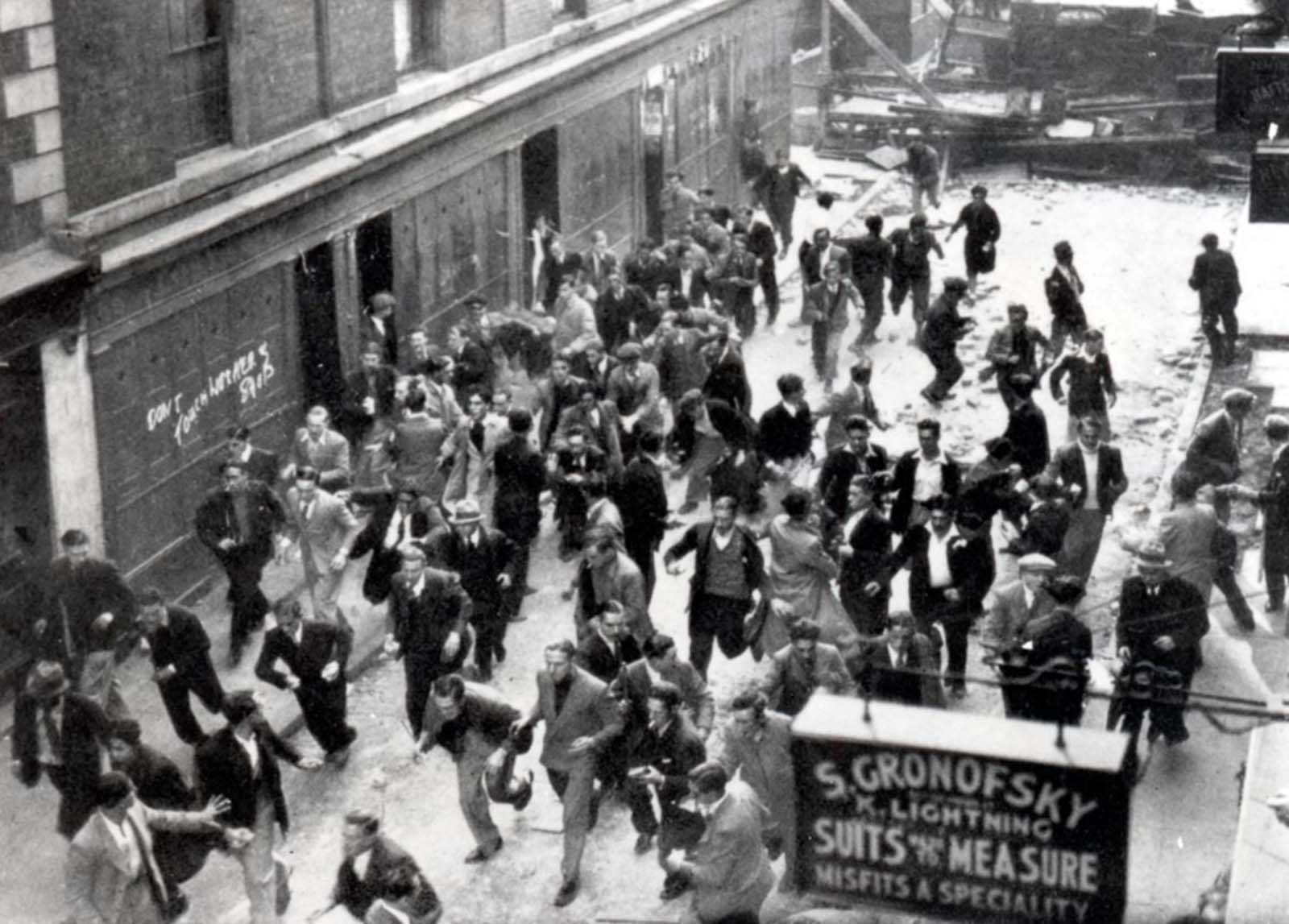 Anti-fascist protesters retreat as police charge a barricade they erected near Aldgate. 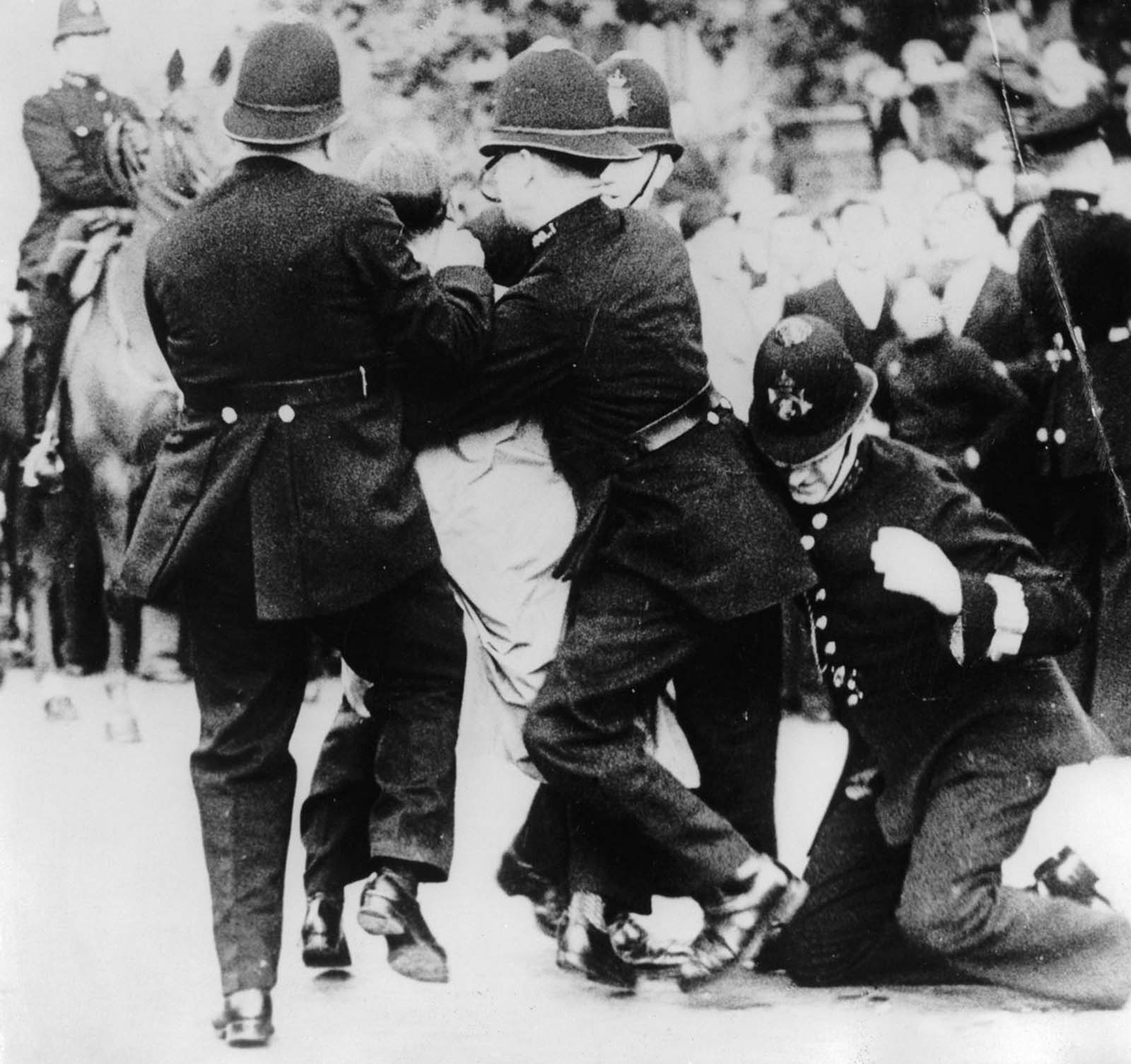 Police arrest an anti-fascist protester. One officer is holding the protester’s shoe in his hand. 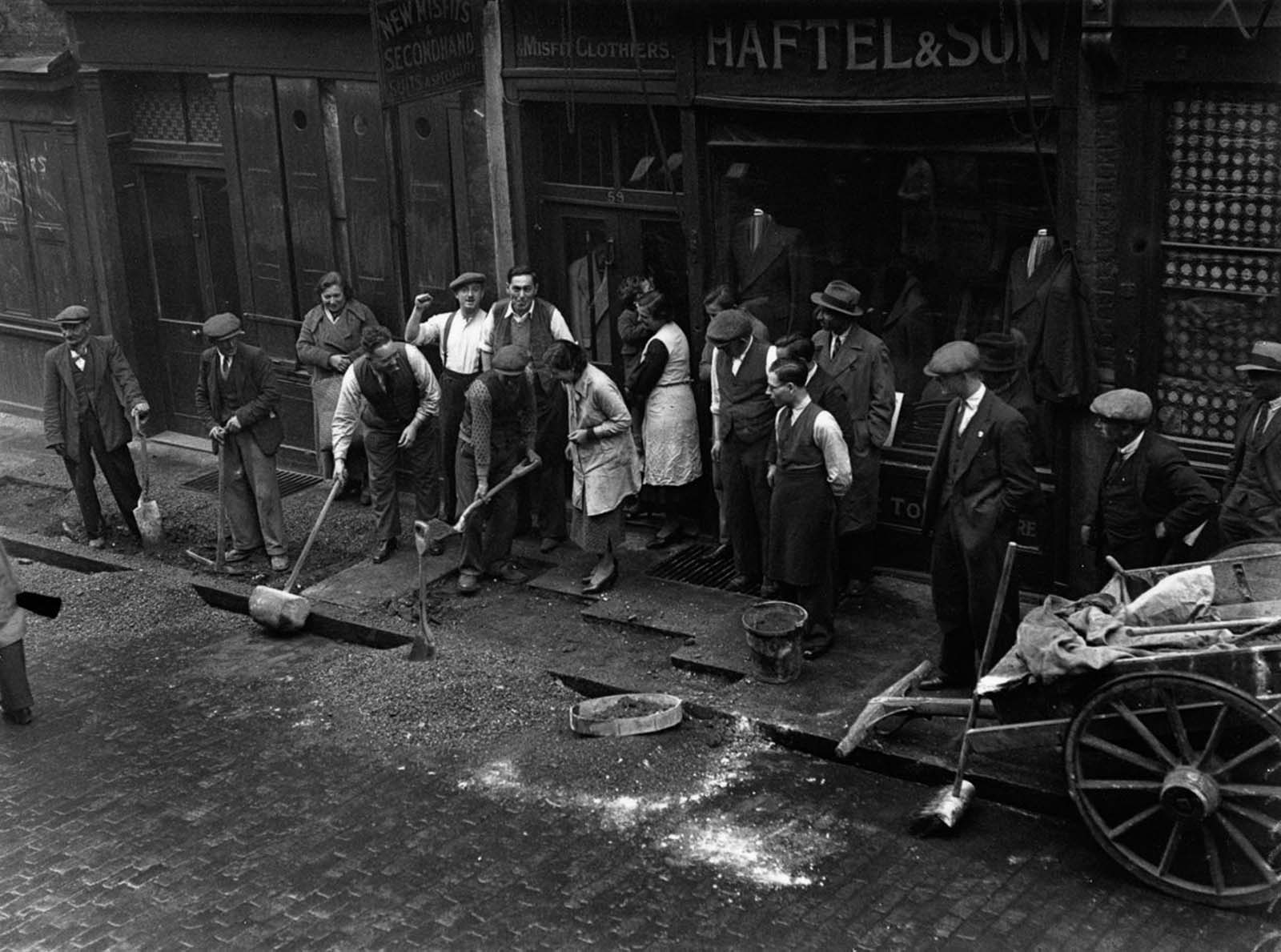 Locals repair a sidewalk which was torn up to disrupt the fascist march. 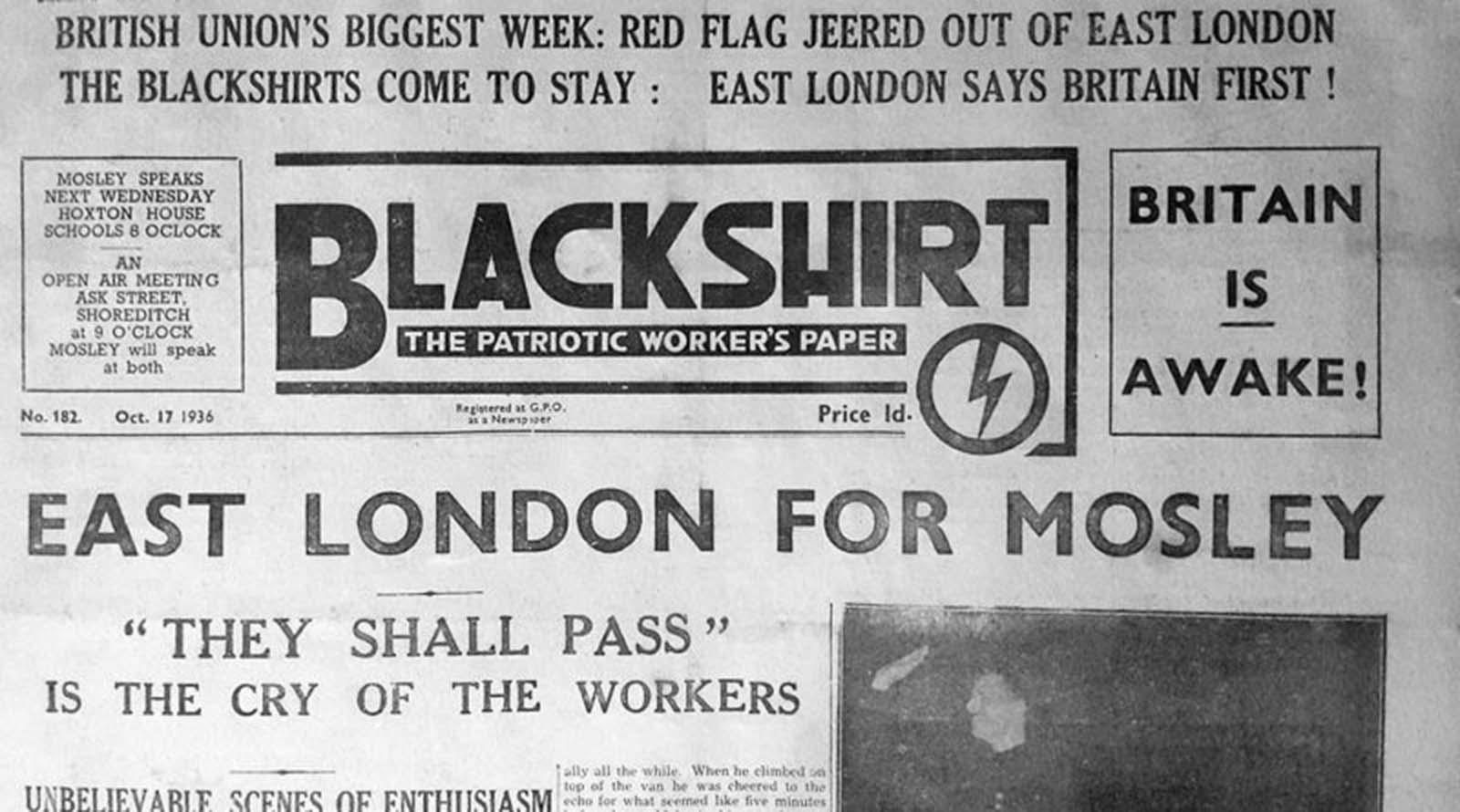 The report from the BUF newspaper. 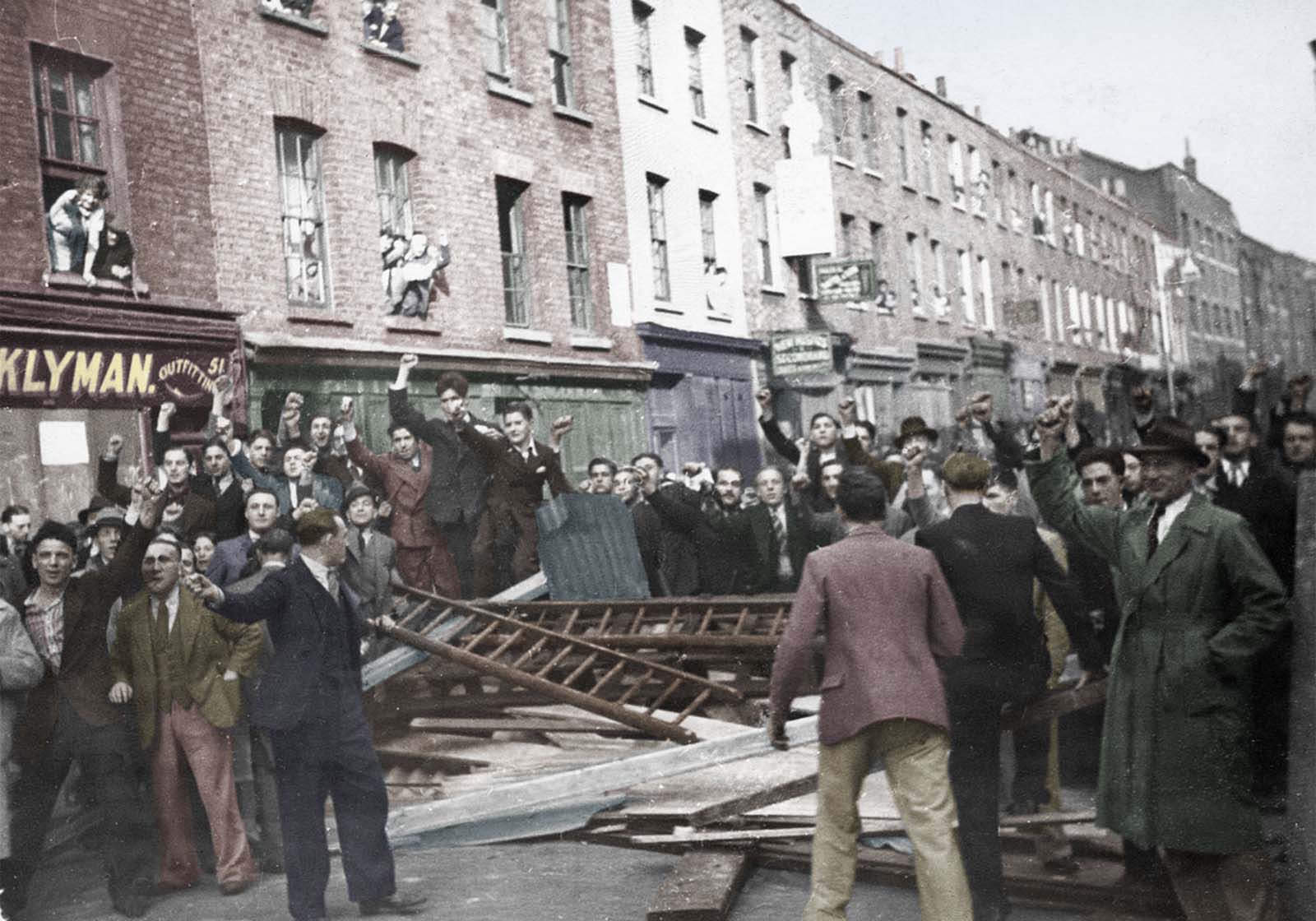