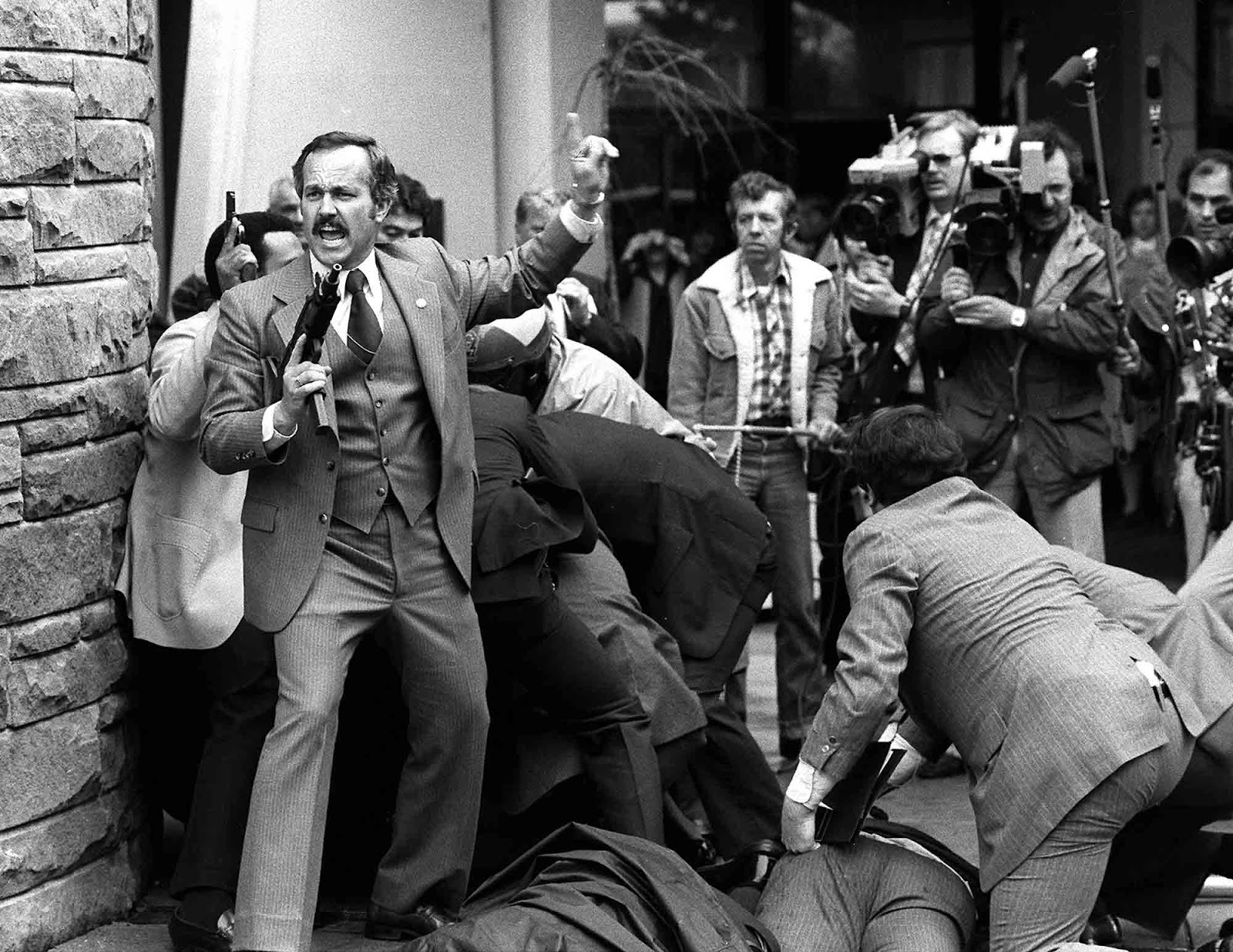 Agent Robert Wanko (misidentified as “Steve Wanko” in a newspaper report) took an Uzi submachine gun from a briefcase to cover the President’s evacuation and to deter a potential group attack.

On March 30, 1981, Ronald Reagan was 69 days into his presidency. As he exited the Washington Hilton Hotel after giving a speech, the president was struck by a bullet fired by John Hinckley, Jr. Three others were also shot – Press Secretary James Brady, Washington Police Officer Thomas Delahanty, and Secret Service Agent Tim McCarthy.

Hinckley was armed with a .22 revolver with exploding bullets and was only ten feet away from Reagan when he began shooting. Fortunately, he was a poor shot and most of the bullets did not explode as they were supposed to.

Hinckley’s first shot hit press secretary James Brady and other shots wounded a police officer and a Secret Service agent. The final shot hit Reagan’s limo and then ricocheted into the President’s chest. 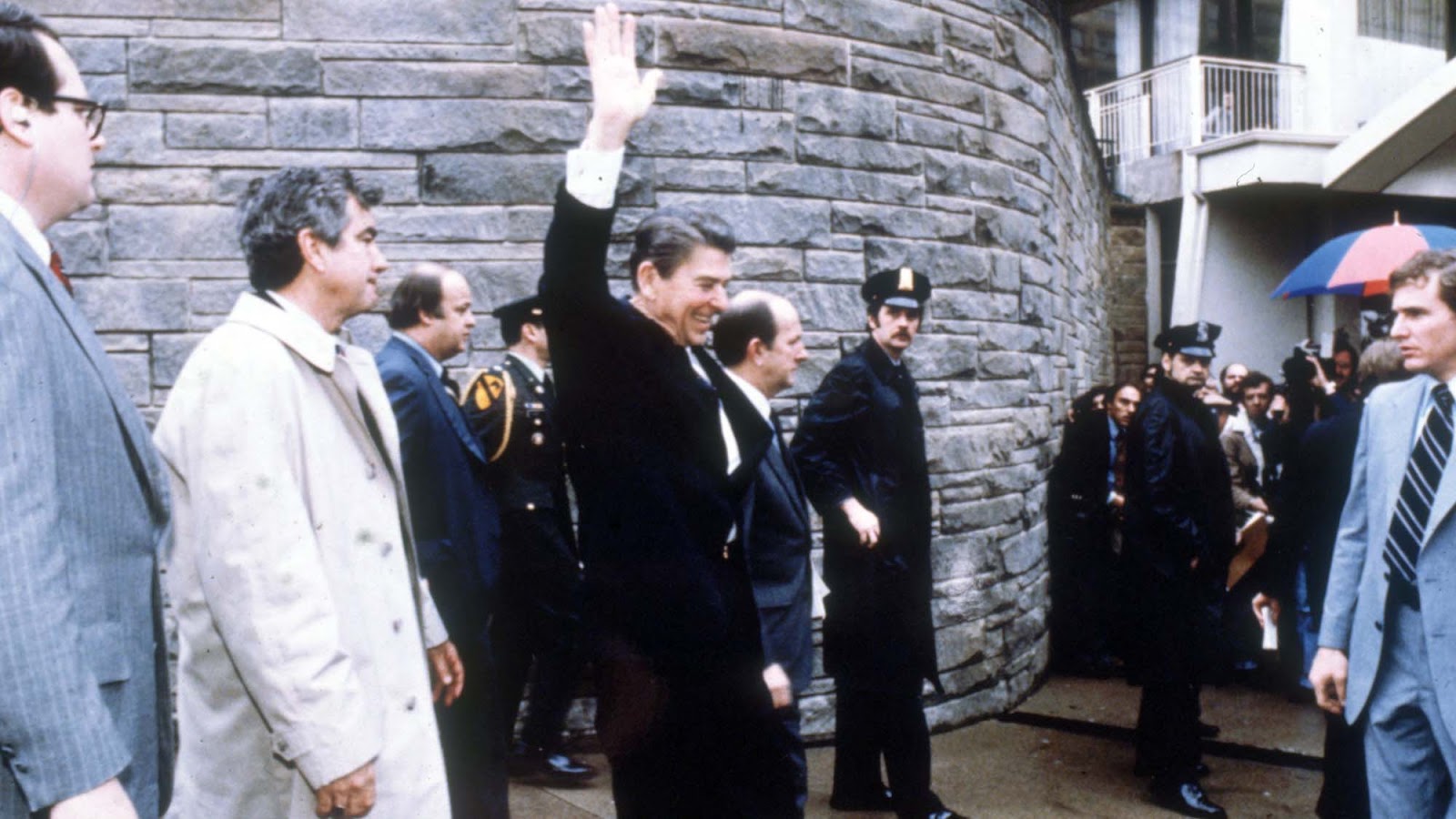 As Reagan exited the hotel toward his waiting limousine, Hinckley waited within the crowd of admirers.

Hinckley’s path toward the assassination attempt began in 1976 when he saw the movie Taxi Driver. Robert DeNiro’s Travis Bickle stalks a Presidential candidate in the hopes that he will somehow impress and rescue a young prostitute played by Jodie Foster. Hinckley, who spent seven years in college without earning a degree or making a friend, added Foster to his list of obsessions.

Over the following years, Hinckley trailed Foster around the country, going so far as to enroll in a writing course at Yale University in 1980 after reading in People magazine that she was a student there.

He wrote numerous letters and notes to her in late 1980. He called her twice and refused to give up when she indicated that she was not interested in him. 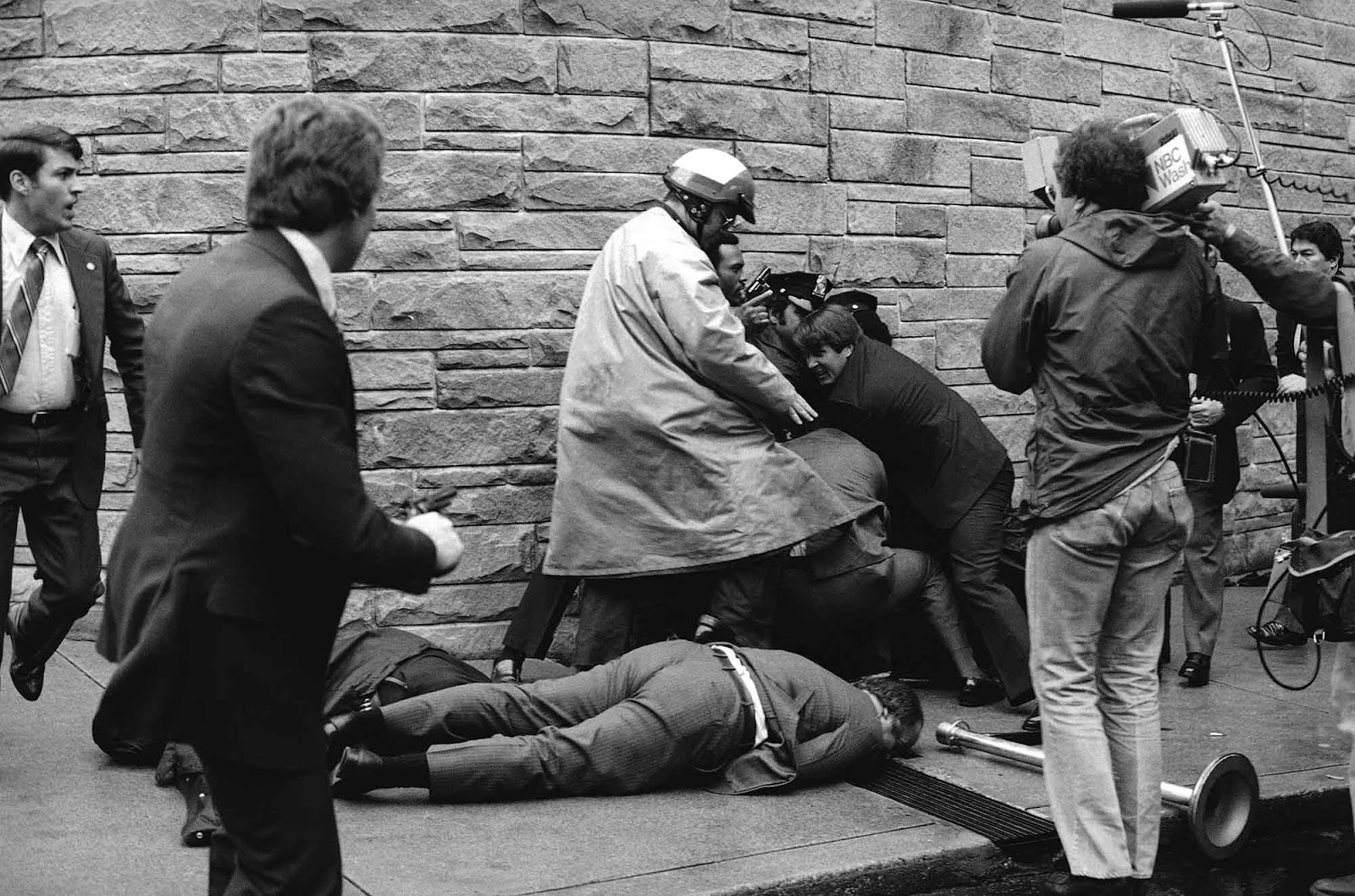 Hinckley fired a Röhm RG-14 .22LR blue steel revolver six times in 1.7 seconds, missing the president with all but one shot.

Convinced that by becoming a national figure he would be Foster’s equal, Hinckley decided to emulate Bickle and began to stalk President Jimmy Carter.

He was surprised at how easy it was to get close to the president—only one foot away at one event—but was arrested in October 1980 at Nashville International Airport for illegal possession of firearms; though Carter made a campaign stop there, the Federal Bureau of Investigation did not connect this arrest to the President and did not notify the United States Secret Service.

His parents briefly put him under the treatment of a psychiatrist. Subsequently, Hinckley turned his attention to Ronald Reagan whose election, he told his parents, would be good for the country.

After Reagan was shot and nearly killed, there was a great deal of confusion at the upper levels of government. In the most notable incident, Secretary of State Alexander Haig told the press that “I am in control here in the White House, pending return of the vice-president”, under the mistaken belief that the chain of the command placed him in charge. 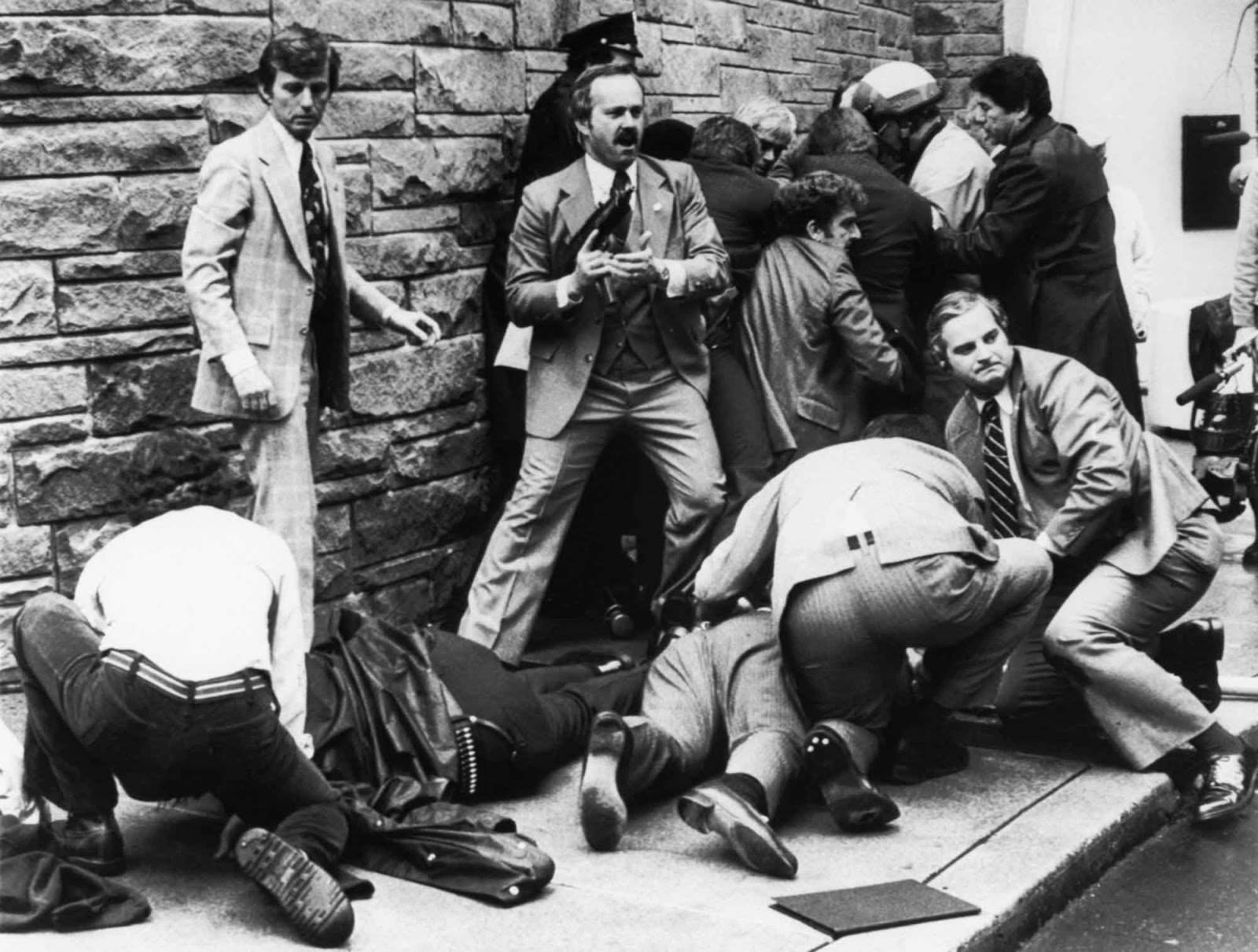 The sixth and final bullet ricocheted off the armored side of the limousine and hit the president in the left underarm, grazing a rib and lodging in his lung, causing it to partially collapse, and stopping nearly 1 inch (25 mm) from his heart. 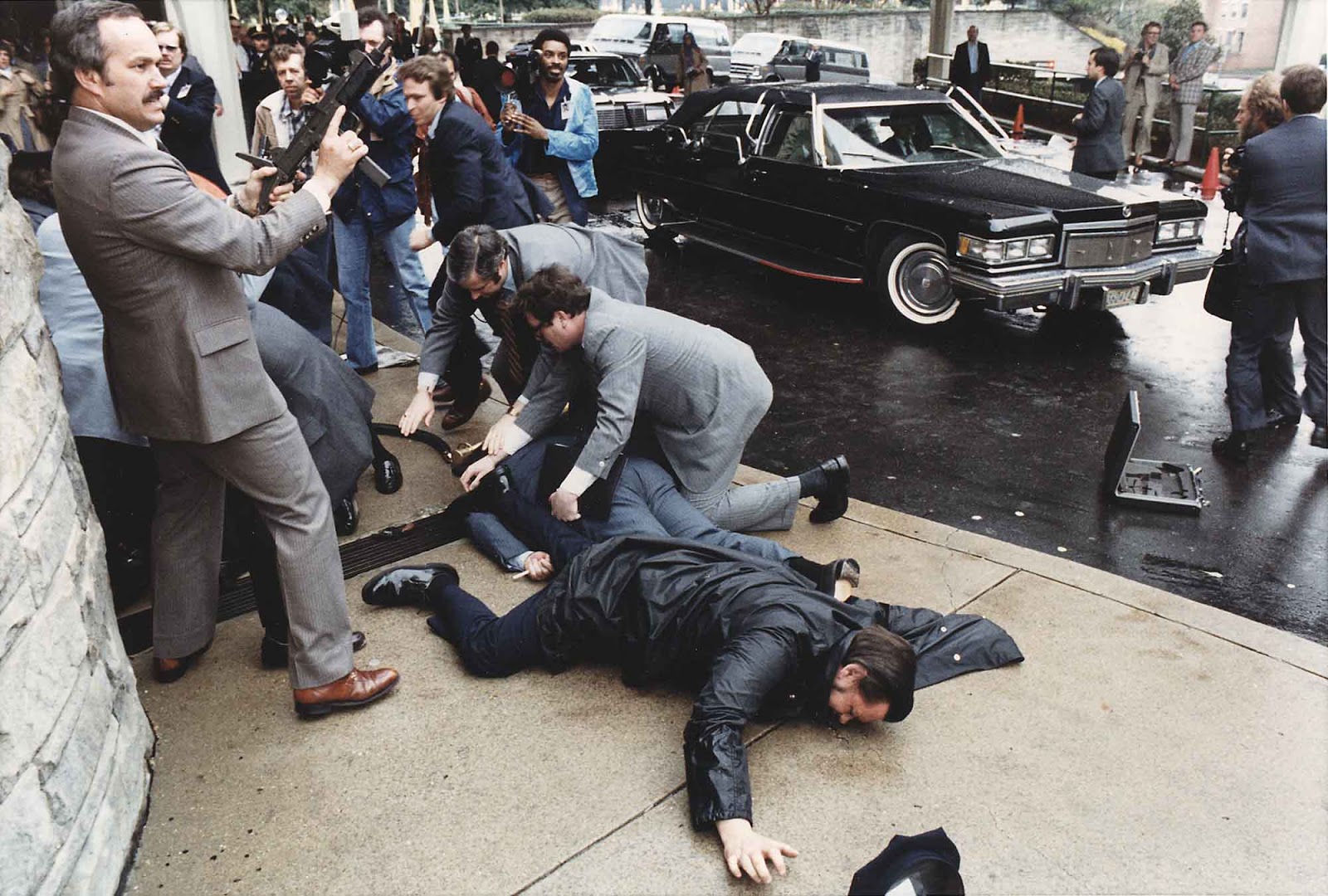 After the shooting, Alfred Antenucci, a Cleveland, Ohio, labor official who stood nearby Hinckley, was the first to respond. He saw the gun and hit Hinckley in the head, pulling the shooter down to the ground. 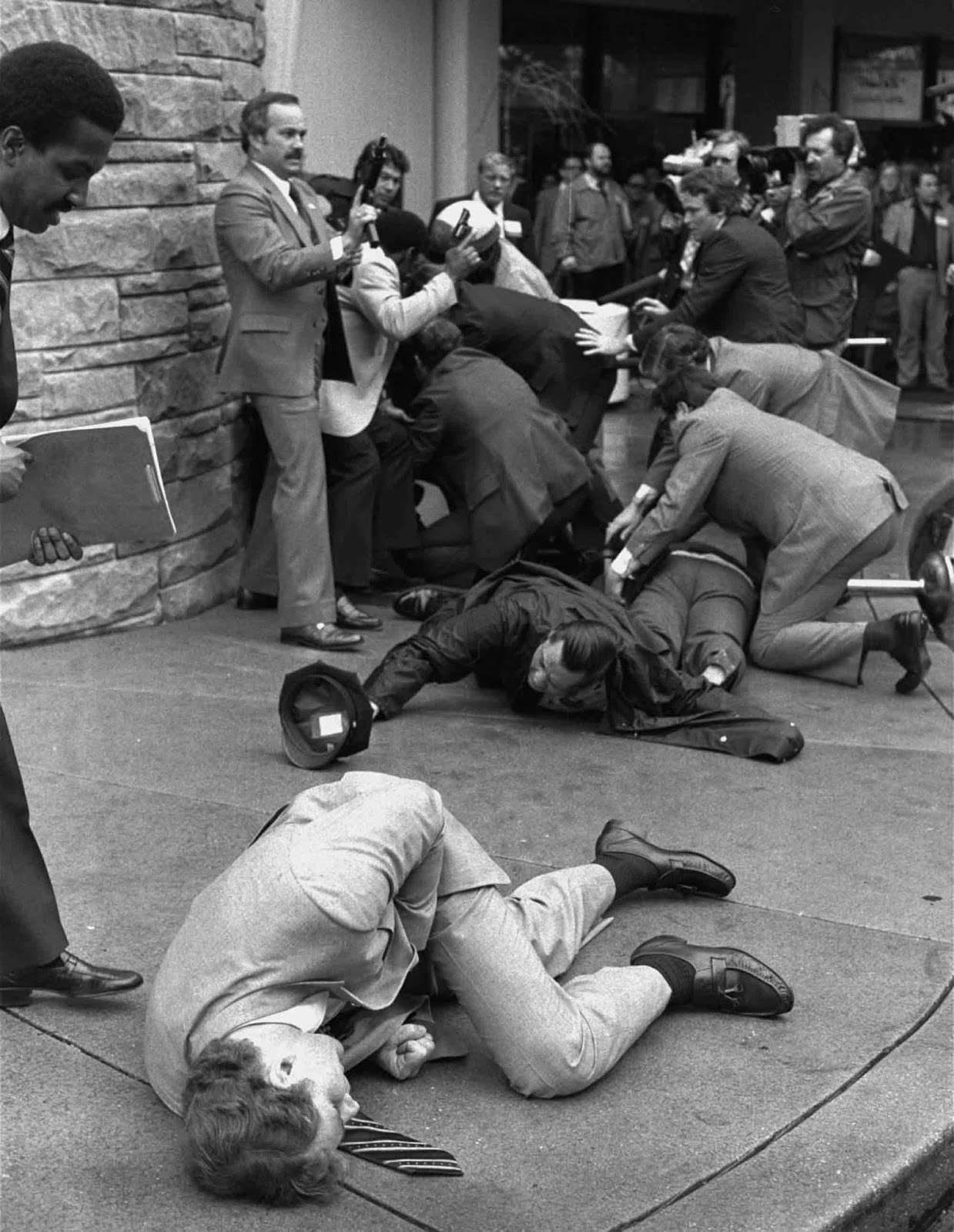 Secret Service agent clutching his stomach after being shot during the assassination attempt of President Ronald Reagan.

Hinckley was found not guilty by reason of insanity on June 21, 1982. The defense psychiatric reports had found him to be insane while the prosecution reports declared him legally sane. Following his lawyers’ advice, he declined to take the stand in his own defense.

Hinckley was confined at St. Elizabeths Hospital in Washington, D.C. full time until 2006, at which point he began a program of spending gradually more time at his mother’s home. On September 10, 2016, Hinckley was permitted to permanently leave the hospital to live with his mother full time, under court supervision, and with mandatory psychiatric treatment.

After his trial, he wrote that the shooting was “the greatest love offering in the history of the world”, and did not then indicate regrets.

The attempt had a great influence on Reagan’s popularity; polls indicated his approval rating to be around 73%. Reagan believed that God had spared his life so that he might go on to fulfill a greater purpose and, although not a Catholic, meetings with Mother Teresa, Cardinal Terence Cooke, and fellow shooting survivor Pope John Paul II reinforced his belief. Agent Parr came to believe that God had directed his life to save Reagan and became a pastor.

The two law enforcement officers recovered from their wounds, although Delahanty was forced to retire because of his injuries. The attack seriously wounded the President’s Press Secretary, James Brady, who sustained a serious head wound and became permanently disabled.

Brady remained as Press Secretary for the remainder of Reagan’s administration, but this was primarily a titular role. Later, Brady and his wife Sarah became leading advocates of gun control and other actions to reduce the amount of gun violence in the United States.

Jodie Foster was hounded relentlessly by the media in early 1981 because she was Hinckley’s target of obsession. Since then, Foster has only commented on Hinckley on three occasions: a press conference a few days after the attack, an article she wrote in 1982, and during an interview with Charlie Rose on 60 Minutes II in 1999; she has otherwise ended or canceled several interviews after the event was mentioned or if the interviewer was going to bring up Hinckley.