Las Vegas is known as the city of lights and, at one time, that light was the glow of an atomic detonation in the Nevada desert. Starting in 1951, the US Army began testing nuclear ordinances just 65 miles from the Sin City.

At night, the glow of the bombs lit up the sky, and mushroom clouds could be spotted rising over the horizon during the day.

In classical American fashion, fear was not the only reaction. Vegas started becoming a destination for a certain type of people — Nuclear Tourists.

Additionally, over 87% of the Nevada area is owned by the federal government. It had vast available lands, sunny weather, and good rail connections. 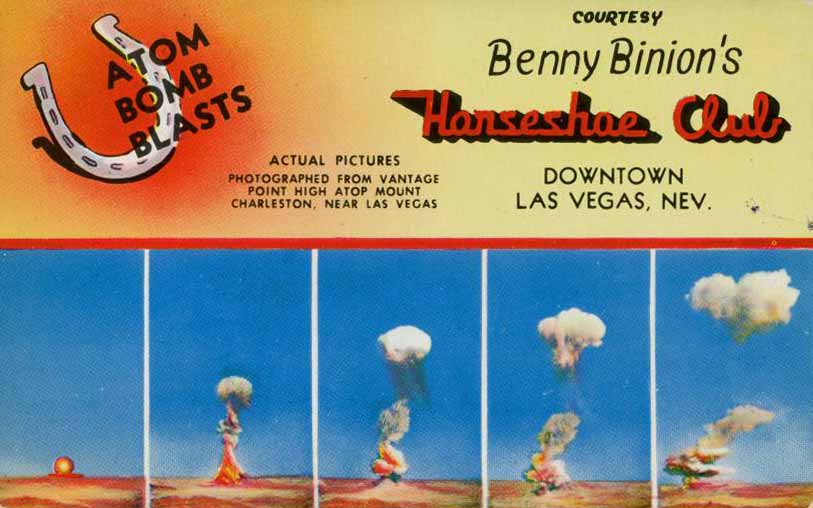 The nuclear detonations provided a source of spectacles and entertainment for people who did live in this area. As a result, Vegas began to experience a new influx of people from across the country who would travel thousands of miles in order to catch a glimpse of this new show.

Soon after Las Vegas was transformed from the original city of 25,000 people to the world-renown spectacle of three million people.

Journalists everywhere began jumping on this new exciting event, and the topic of atomic tourism became the biggest headliner everywhere.

Even writers in the New York Times began referring to it as, “the non- ancient but nonetheless honorable pastime of atom-bomb watching.” 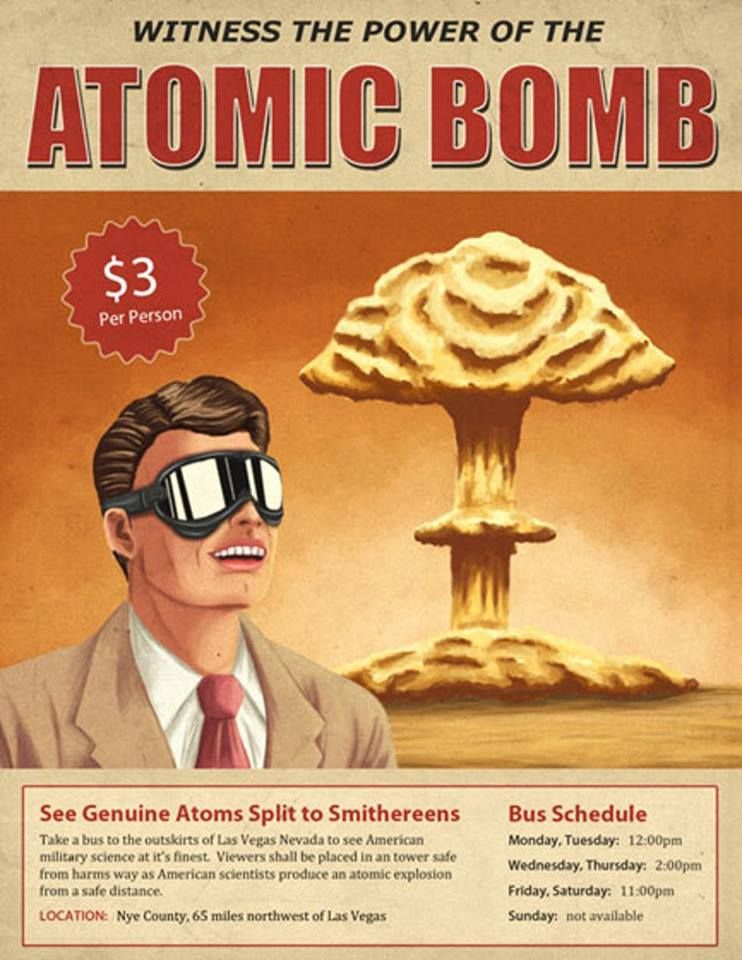 Witness the power of the Atomic Bomb. A mere $3 for a safe viewing distance.

Inherently speaking, Vegas was designed for showmanship. Visitors are encouraged to live in the moment and focus on what is in front of them, by masking the individual from all reminders of time and location.

Their motto: pay attention to what is in front of you. Therefore by taking advantage of this concept and its psychological effect, landowners and industry owners began turning these tests into spectacles of themselves.

The Vegas Chamber of Commerce promoted in advance the dates and times for these tests. Calendars and community announcements would be published months in advance for tourists to plan and enjoy the spectacle of the mushroom cloud.

Photos of these events began circulating across news sources everywhere and bomb-watching became such a rage that thrill-seeking tourists would make sure to get the closest spot possible to the ground-zero.

On the eve of detonations, many Las Vegas businesses held “Dawn Bomb Parties.” Beginning at midnight, guests would drink and sing until the flash of the bomb lit up the night sky. 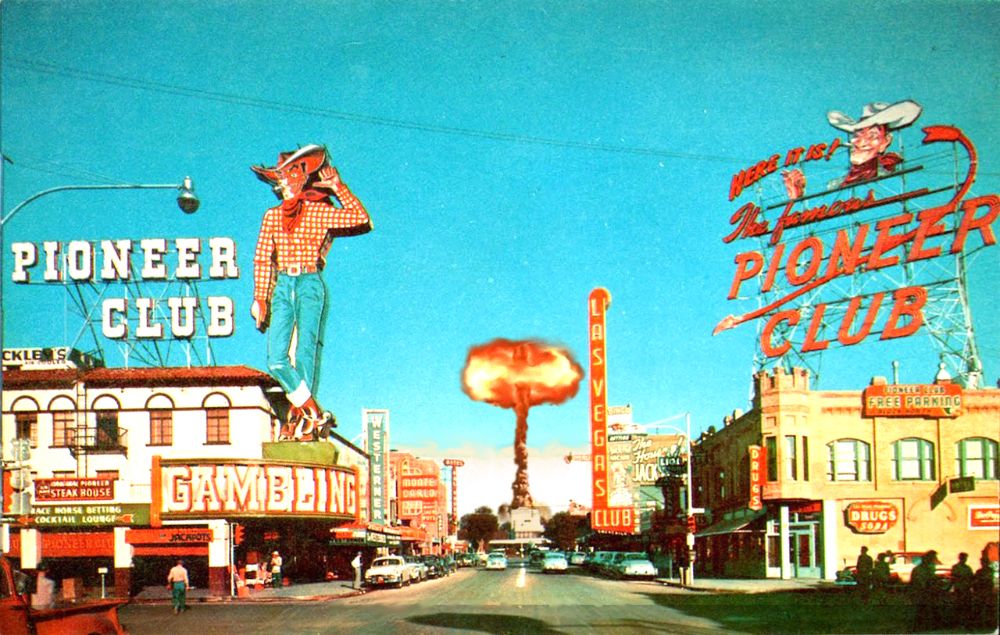 However, in addition to these parties, Vegas also capitalized on the nuclear tests by providing itself as a source of relief and nostalgia from the surrounding terror.

Gambling, games, and television were all sources of distraction that provided Vegas guests with an escape from the fear that was surrounding them.

Both Vegas itself and the Yucca Flats of the Nevada Testing Site were turned into tourist attractions of various sorts. The main spectacle of the site to date are the large craters currently scarring the desert surface.

The desert floor is sprinkled with craters of all shapes and sizes, ranging from nuclear warheads to smaller surface-level bombs. 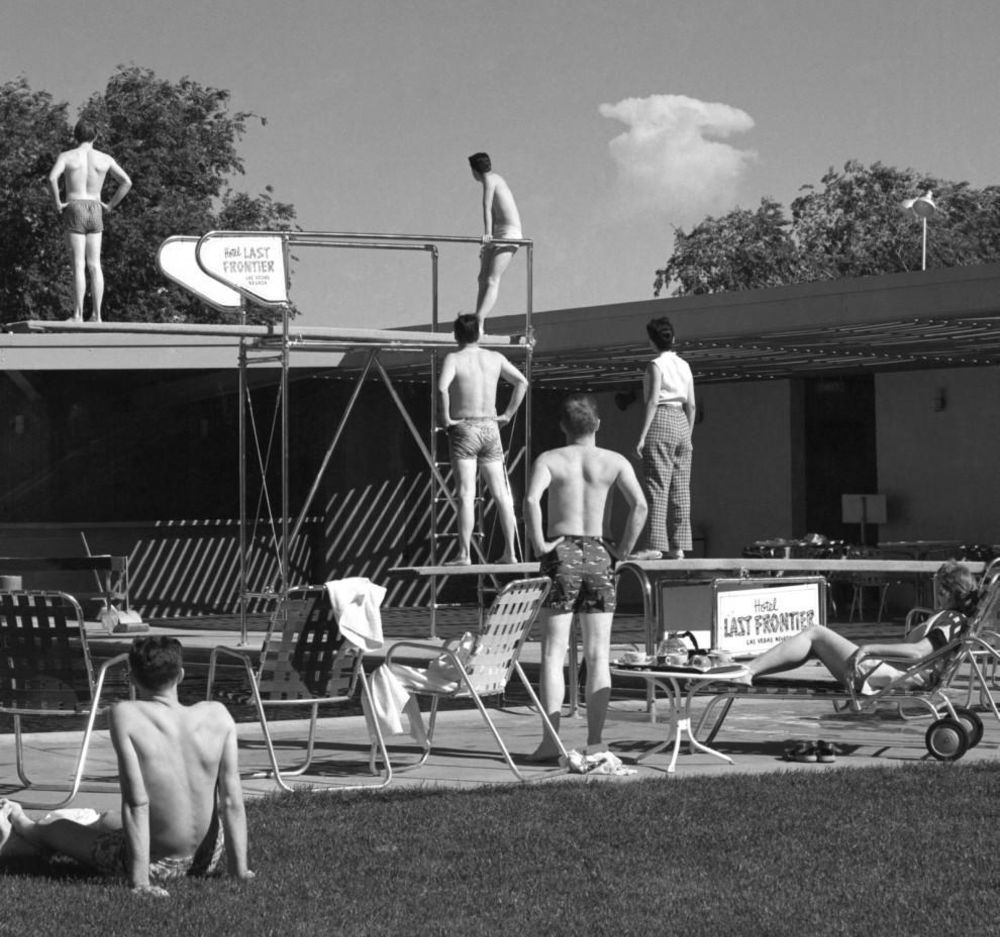 Early morning bathers at a hotel pool in Las Vegas stop to watch the mushroom cloud of an atomic detonation at a test site about 75 miles from the city. May 8, 1953.

One of the more popular craters is Bilby crater, which was created in 1963 by an underground test. Producing about 249 kilotons of explosive power, the blast created a hole that was 1,800 feet wide (550m) and 80 feet (24m) deep and also resulted in an aftershock that was felt all the way in Vegas itself.

Sedan crater is also popular due to its large size. Sitting at about 1280 feet (1280m) wide and 230 feet (70m) deep, a 104 kiloton blast right beneath the surface of the desert floor produced this crater.

The effects compared to that of a 4.75 earthquake moved about 12 million tons of Earth in its passing. 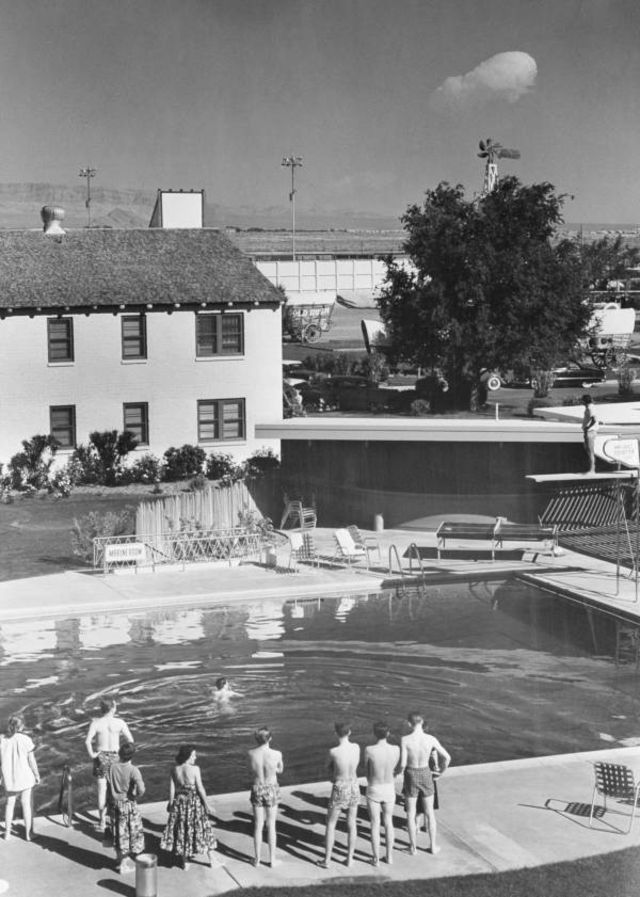 Guests at the Last Frontier hotel in Las Vegas watch the mushroom from a detonation about 75 miles away. May 8, 1953.

One journalist, writing for the Department of State Washington Bulletin, described witnessing the blast: “You put on the dark goggles, turn your head, and wait for the signal. Now — the bomb has been dropped. You wait the prescribed time, then turn your head and look.

A fantastically bright cloud is climbing upward like a huge umbrella…. You brace yourself against the shock wave that follows an atomic explosion.

A heat wave comes first, then the shock, strong enough to knock an unprepared man down. Then, after what seems like hours, the man-made sunburst fades away.” 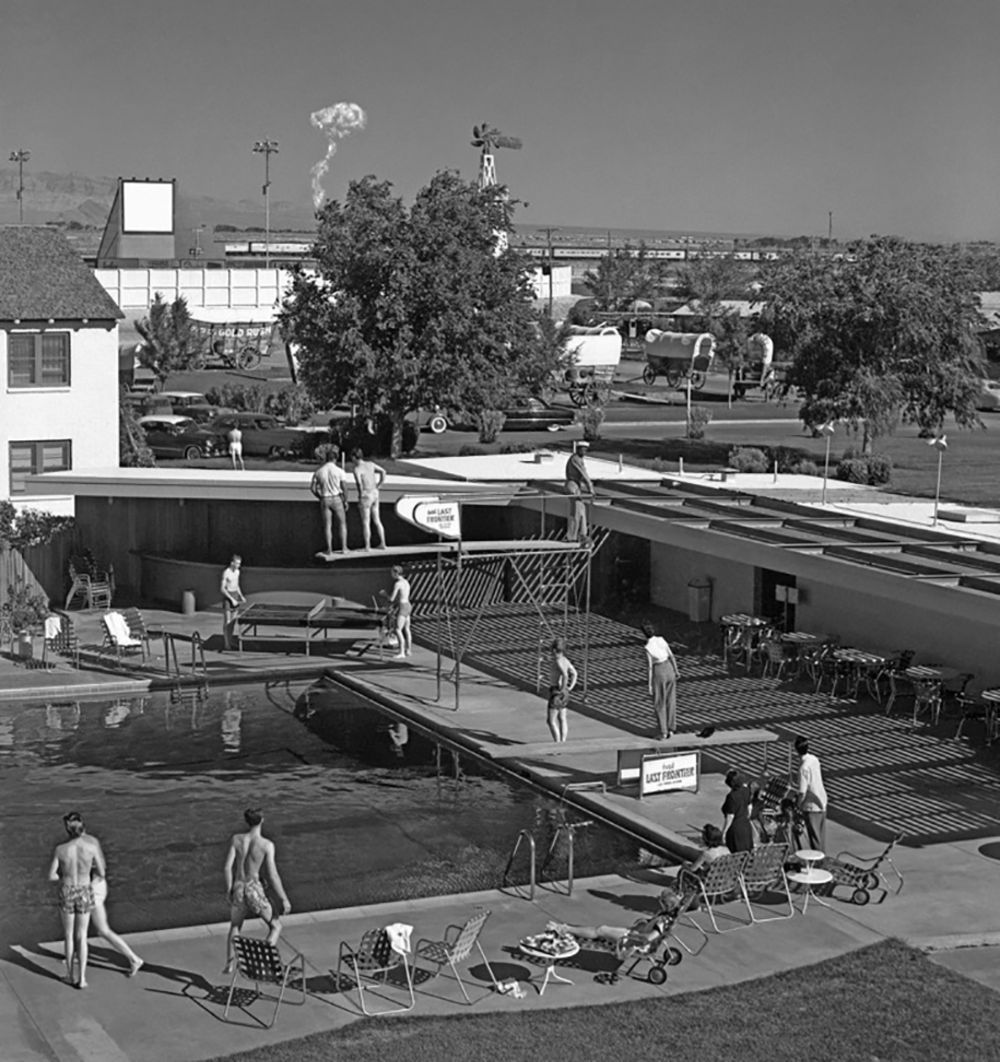 Watching poolside. Nuclear tests were a rather ordinary part of life in Las Vegas.

For twelve years, an average of one bomb every three weeks was detonated, at a total of 235 bombs. Flashes from the explosions were so powerful that they could reportedly be seen from as far away as Montana.

Scientists claimed that the radiation’s harmful effects would have dissipated and been harmless once the shock waves reached Las Vegas, and they scheduled tests to coincide with weather patterns that blew fallout away from the city.

However, as the tests continued, people in northeastern Nevada and southern Utah began complaining that their pets and livestock were suffering from beta particle burns and other ailments; by 1963 the Limited Test Ban was in effect, banning above-ground nuclear testing at the site. 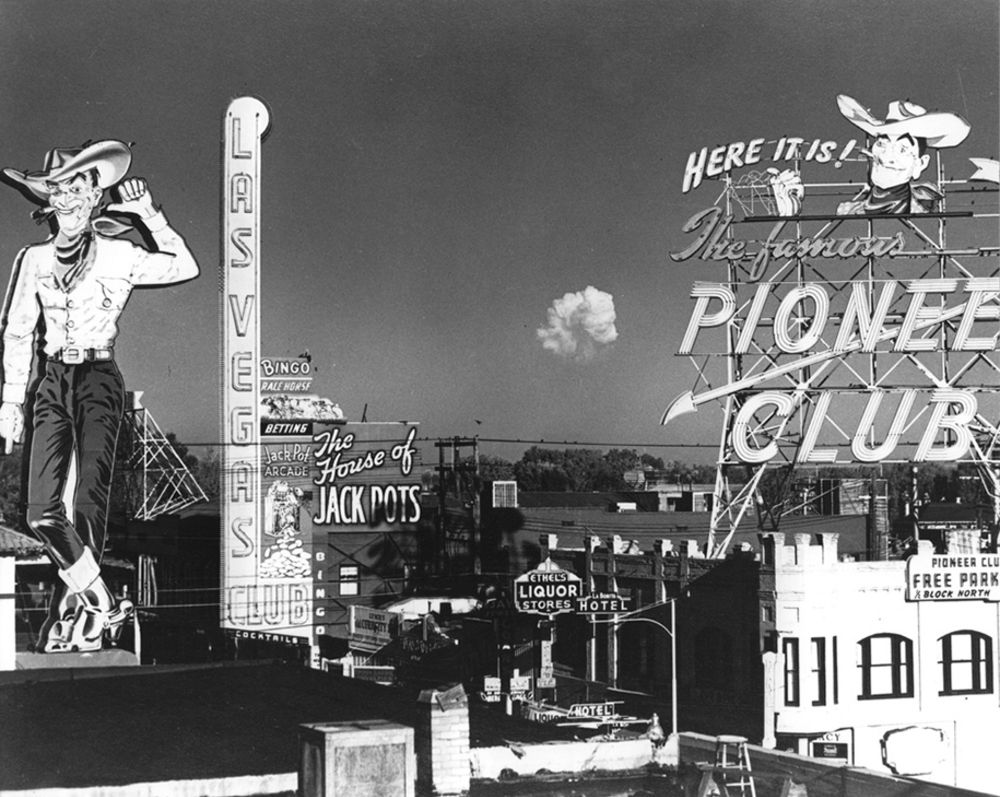 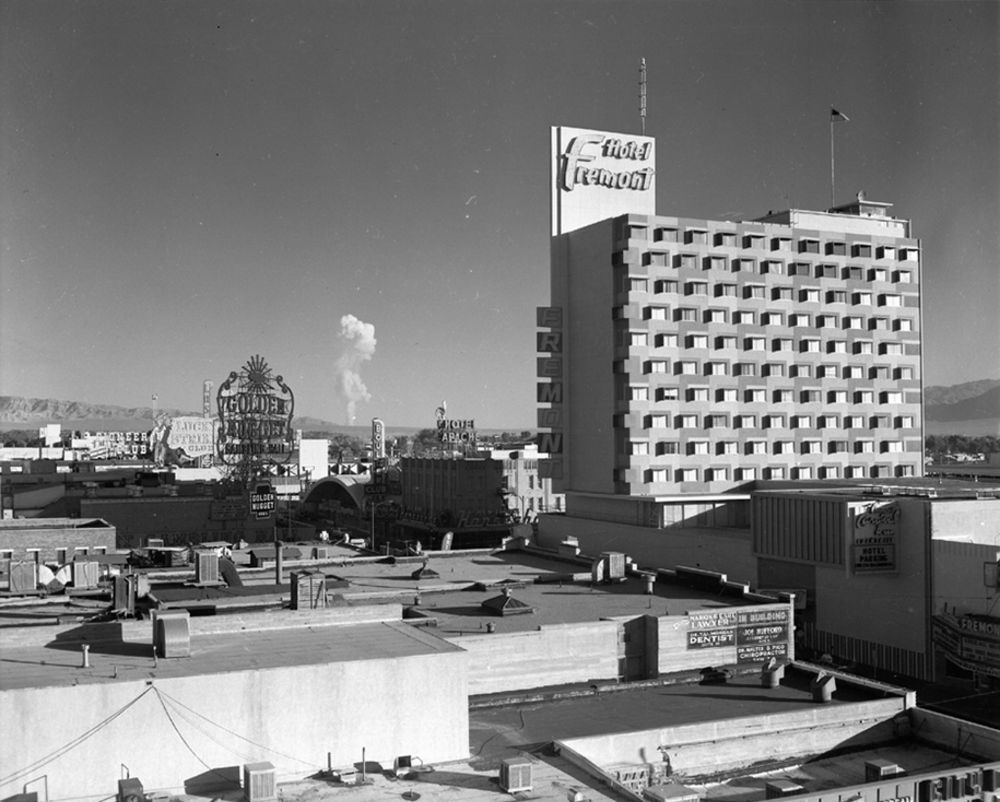 Hotels offered panoramic views of the distant desert skyline for the optimum experience. 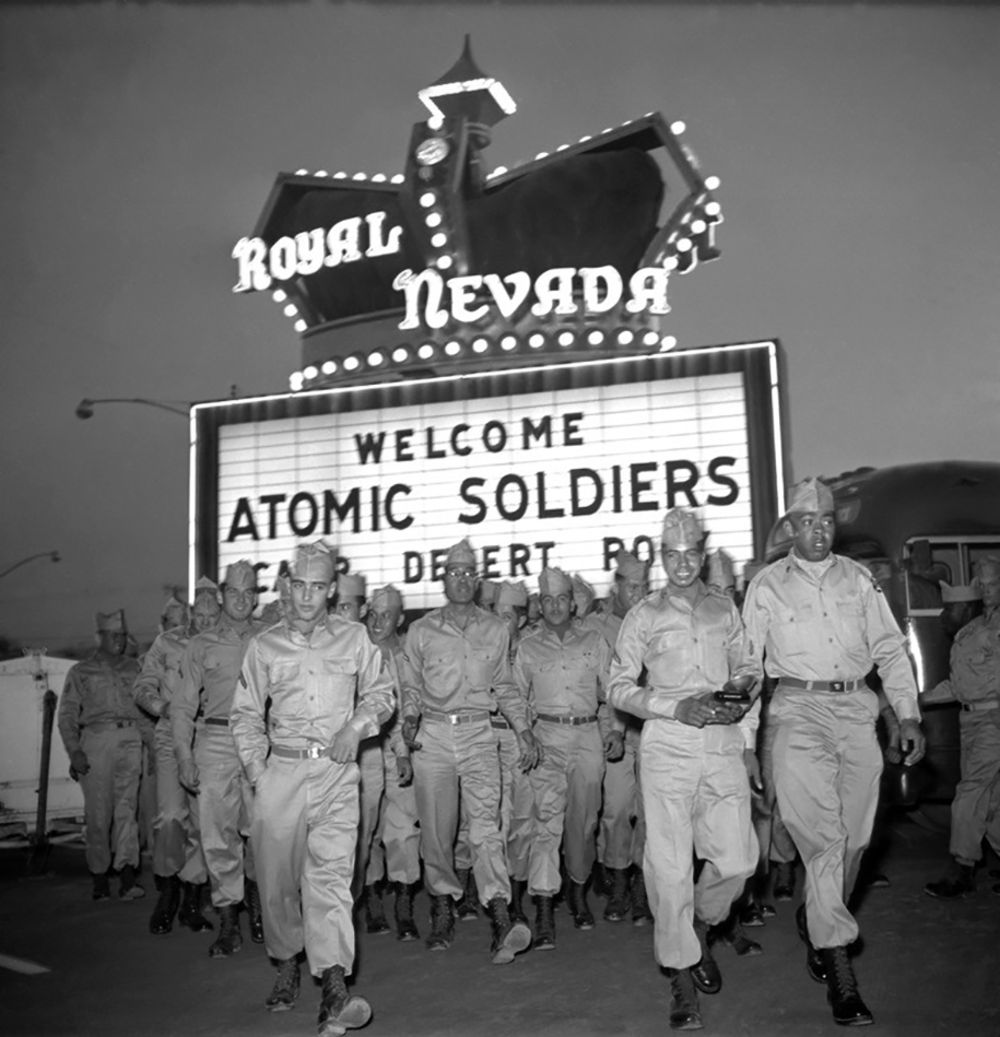 The Nevada Test Site wasn’t just a boom for travelers. The proving ground flooded the area with federal funds, and the site employed close to 100,000 men and women. 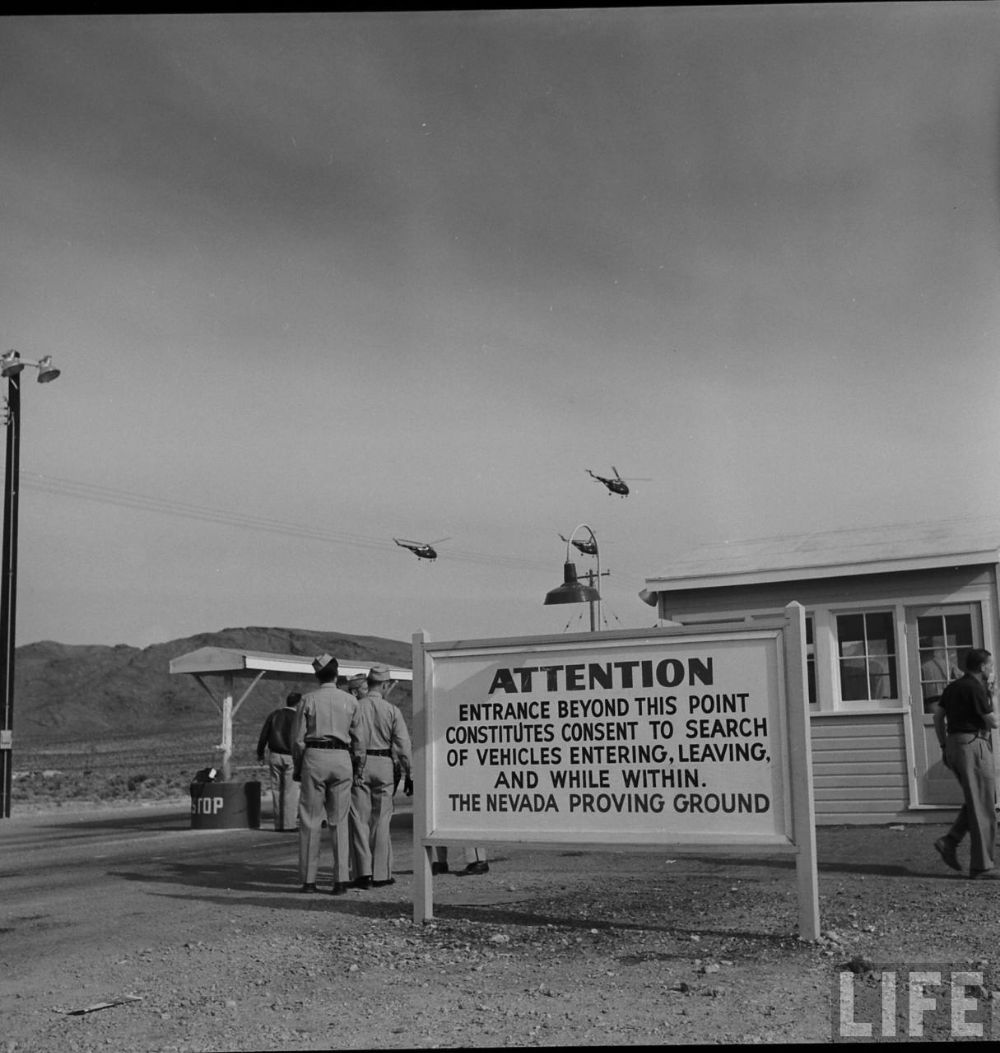 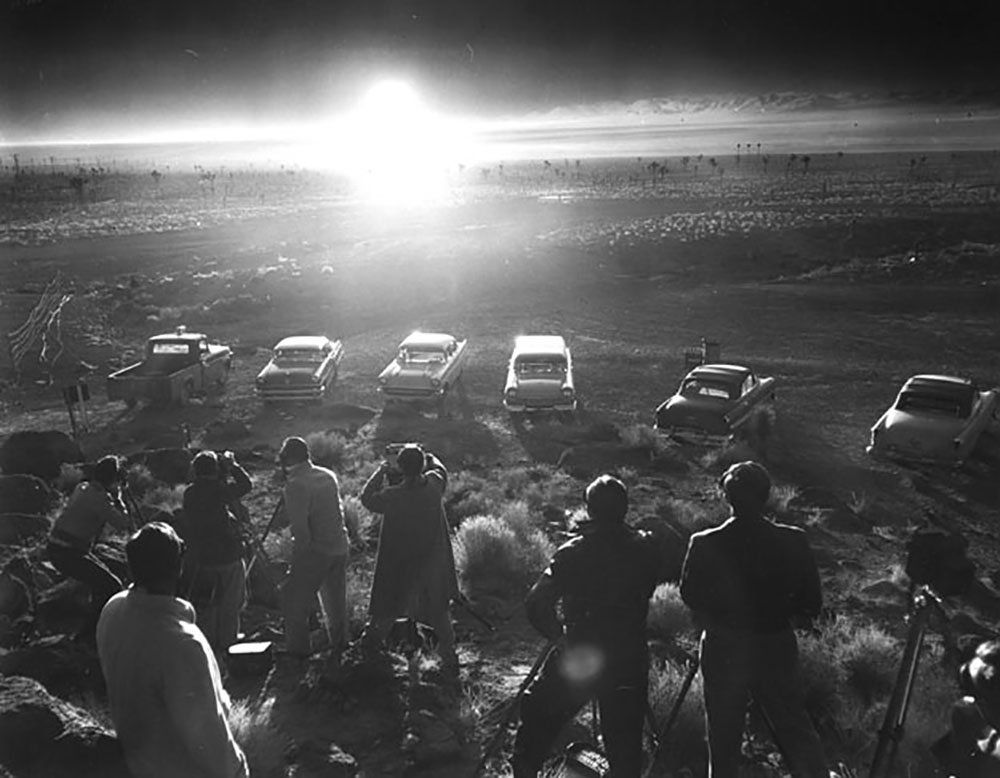 Reporters witness the nuclear test on Frenchman Flat, on June 24, 1957. 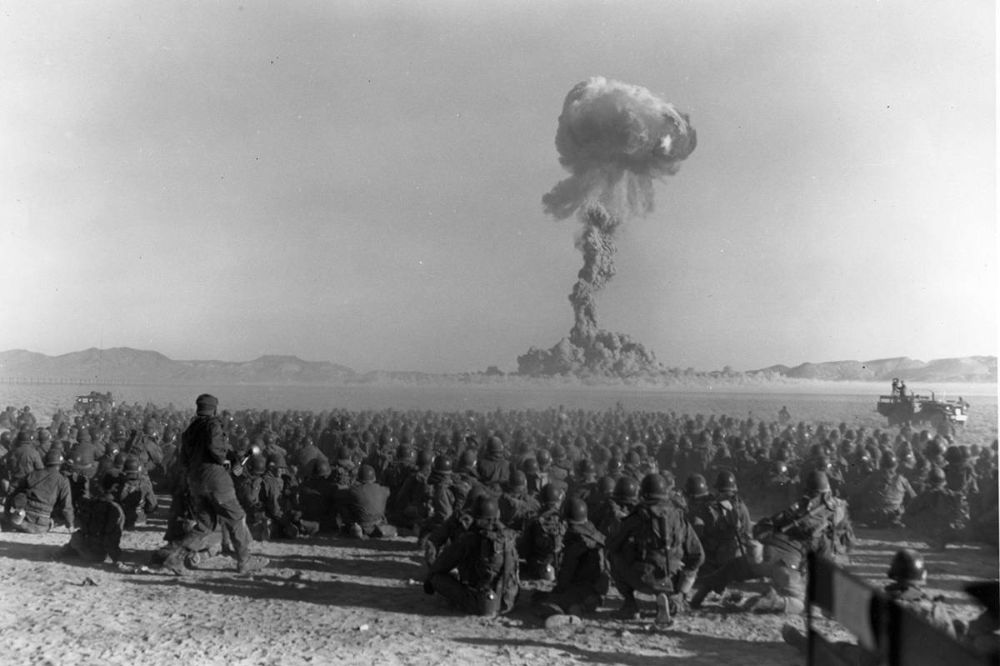 Operation Buster-Jangle – Dog test — with troops participating in exercise Desert Rock I, November 1, 1951. It was the first U.S. nuclear field exercise conducted on land; troops shown are a mere 6 miles from the blast. 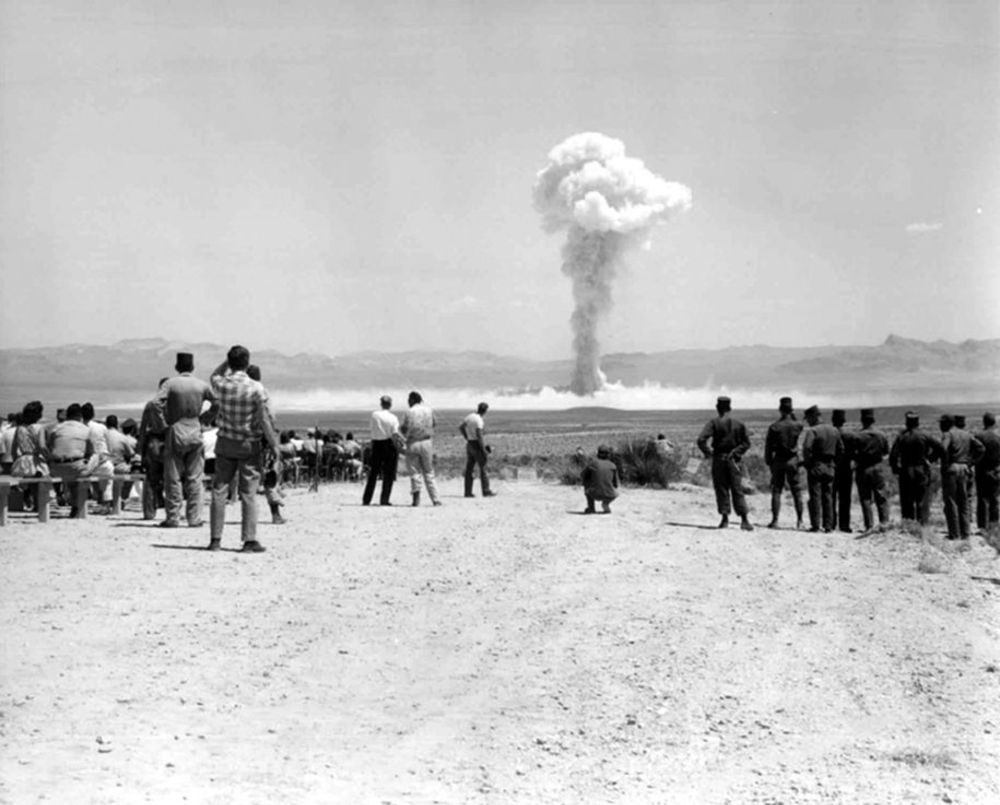 Atomic tourists taking in the sites. 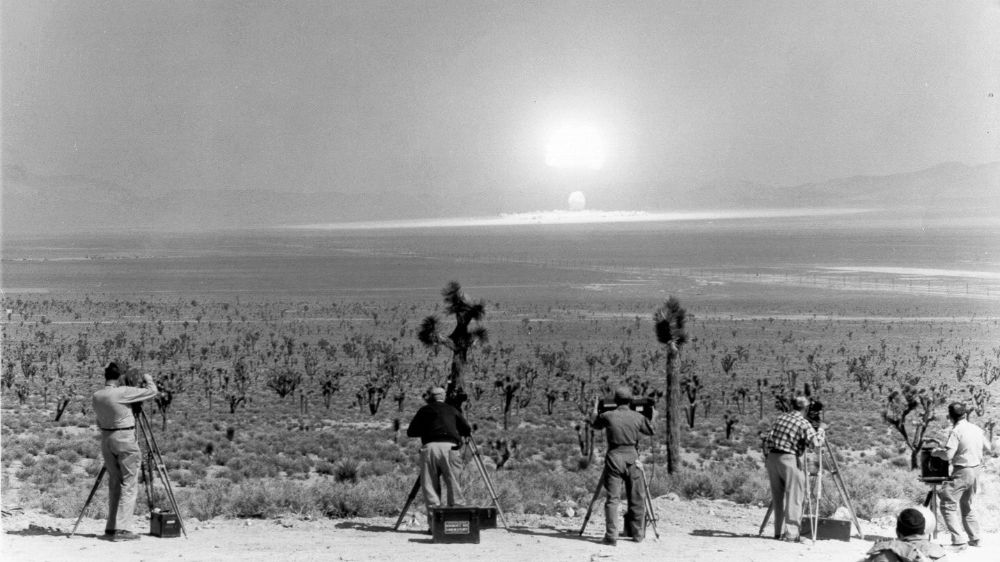 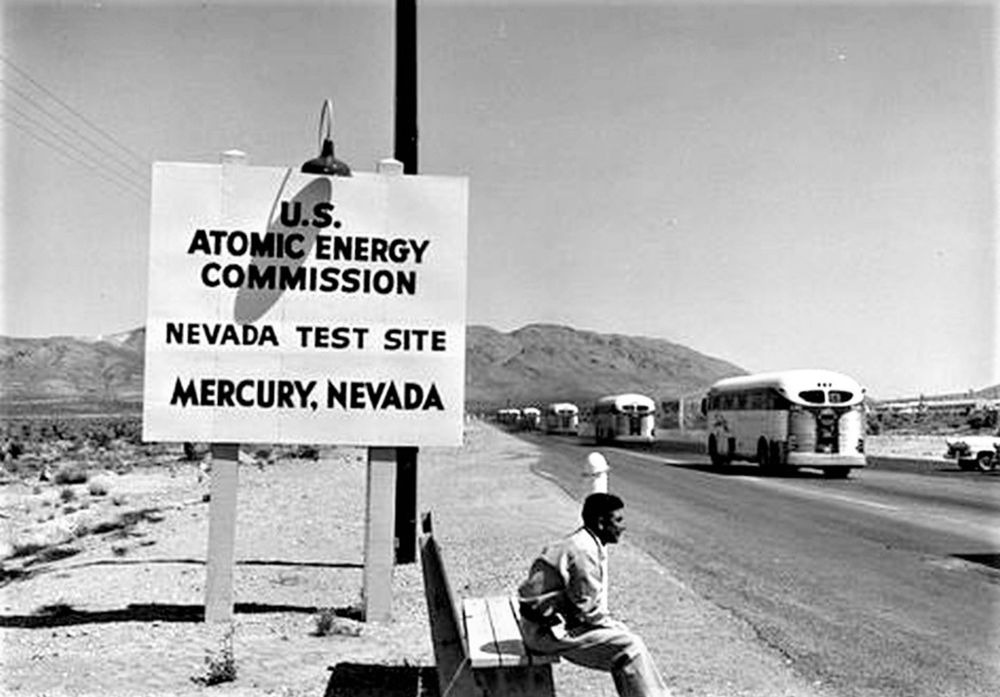 Man sitting near a Nevada Test Site sign, Nevada, United States, 1955 From 1951–1962, Mercury was a town in the Nevada atomic testing site where hundreds of test explosions were conducted.

Soldiers at the test site.

Fashion of the atomic age.

The first flash of light generated by an atomic bomb.

Birds-eye view of dozens of craters dotting the Yucca Flats.

A nuclear crater left behind.

Model posing in front of a nuclear cloud.

Photograph of Yucca Flat, covered with craters created by atomic bombs, in the Nevada Test Site.