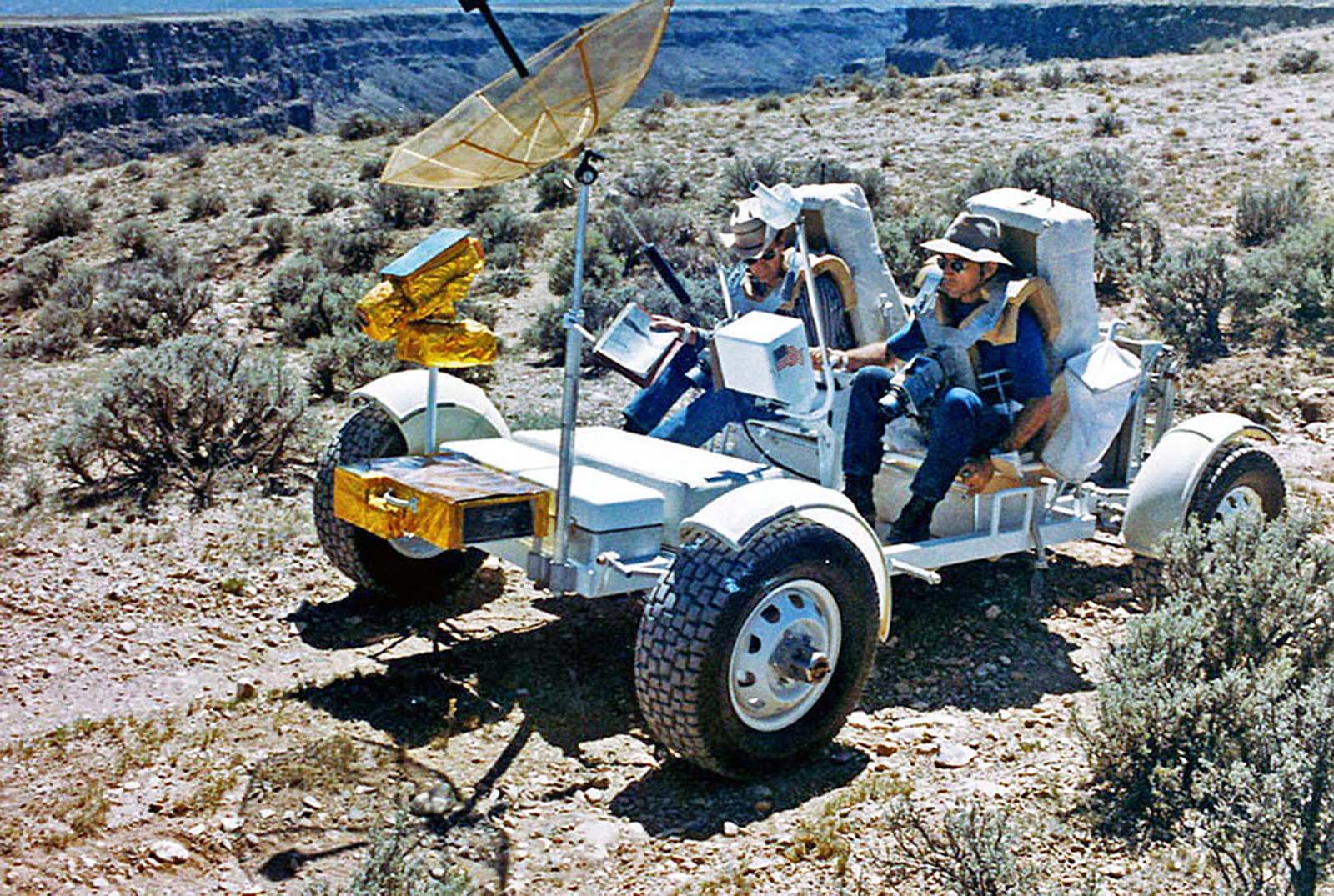 The Apollo astronauts Charles Duke and John Young train on the geological rover, or “Grover,” a lunar rover trainer, in Arizona. Both Duke and Young went on to walk on the surface of the moon in 1972, during Apollo 16.

Before the they walked on the moon on July 20, 1969, the Apollo program astronauts trained in Flagstaff, a small city nestled in a forest of ponderosa pines at the base of the San Francisco Peaks, Arizona’s tallest mountains. In fact, all 24 astronauts who have ever flown to the moon trained in various locations of northern Arizona.

Scientists thought the volcanic cinders of the terrain might be similar to what astronauts would find on the moon. Additionally, the nearby Meteor Crater, the best-preserved impact crater on earth, and the great cosmic gash of the Grand Canyon, provided an unmatched geological classroom.

Between January 1963 and November 1972, scientists based in Flagstaff would lead 200 separate geological field-training exercises for NASA’s astronauts.

In 1967 Nasa decided to bring the moon to Flagstaff – or at least a simulation – by blasting craters of their own. Working with the Astrogeology Science Center, a division of the US Geological Survey established in Flagstaff to study solid bodies in the solar system, explosives were used to blow hundreds of craters in the volcanic terrain north of town. 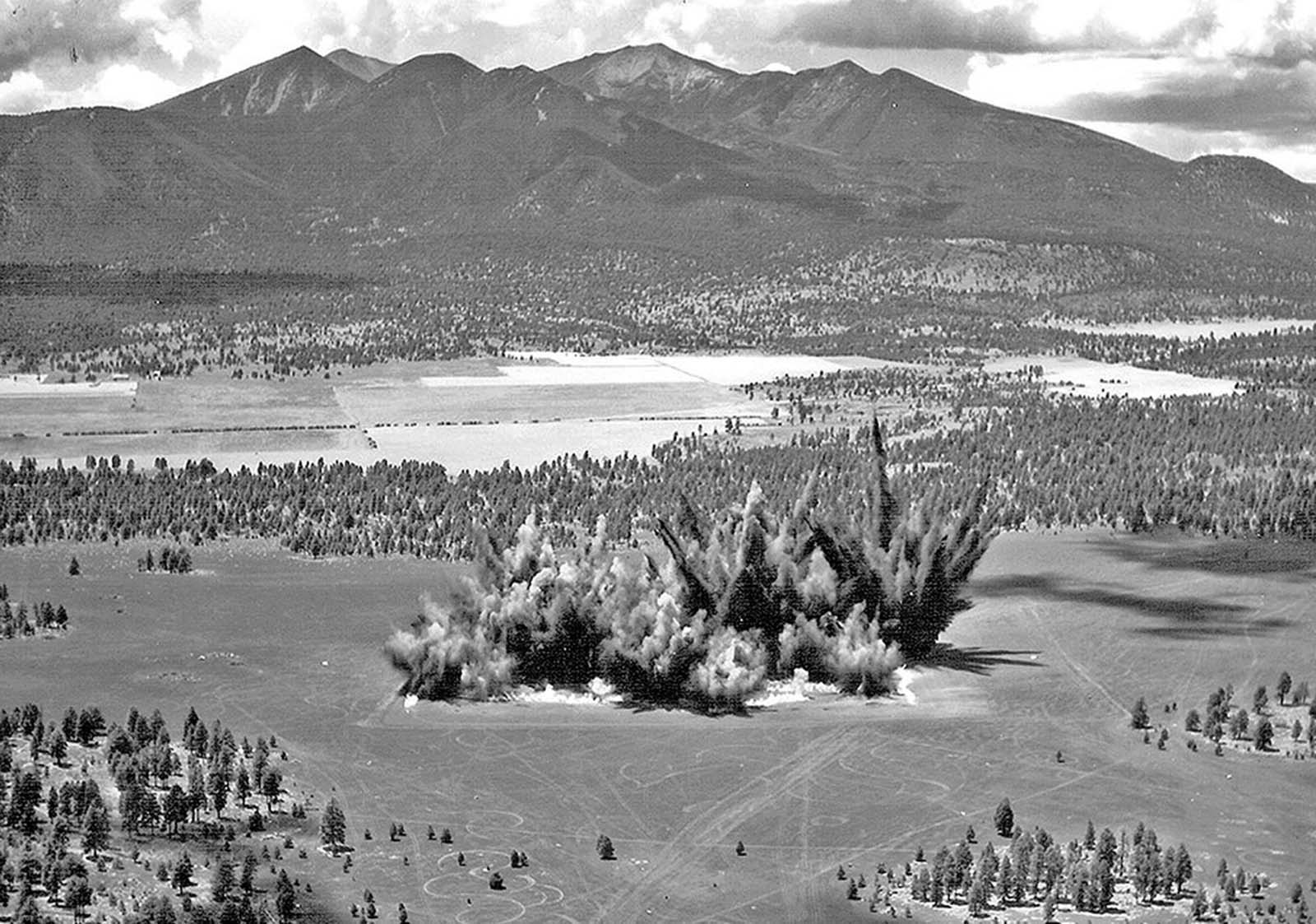 Explosions send dirt into the sky during the construction of Cinder Lake Crater Field #2 on July 27, 1968. A total of 354 craters were carved out of the Arizona landscape in this field to create a simulated lunar surface.

Apollo ran from 1961 to 1972, with the first crewed flight in 1968. It encountered a major setback in 1967 when an Apollo 1 cabin fire killed the entire crew during a prelaunch test.

After the first successful landing, sufficient flight hardware remained for nine follow-on landings with a plan for extended lunar geological and astrophysical exploration.

Budget cuts forced the cancellation of three of these. Five of the remaining six missions achieved successful landings, but the Apollo 13 landing was prevented by an oxygen tank explosion in transit to the Moon, which destroyed the service module’s capability to provide electrical power, crippling the CSM’s propulsion and life support systems. 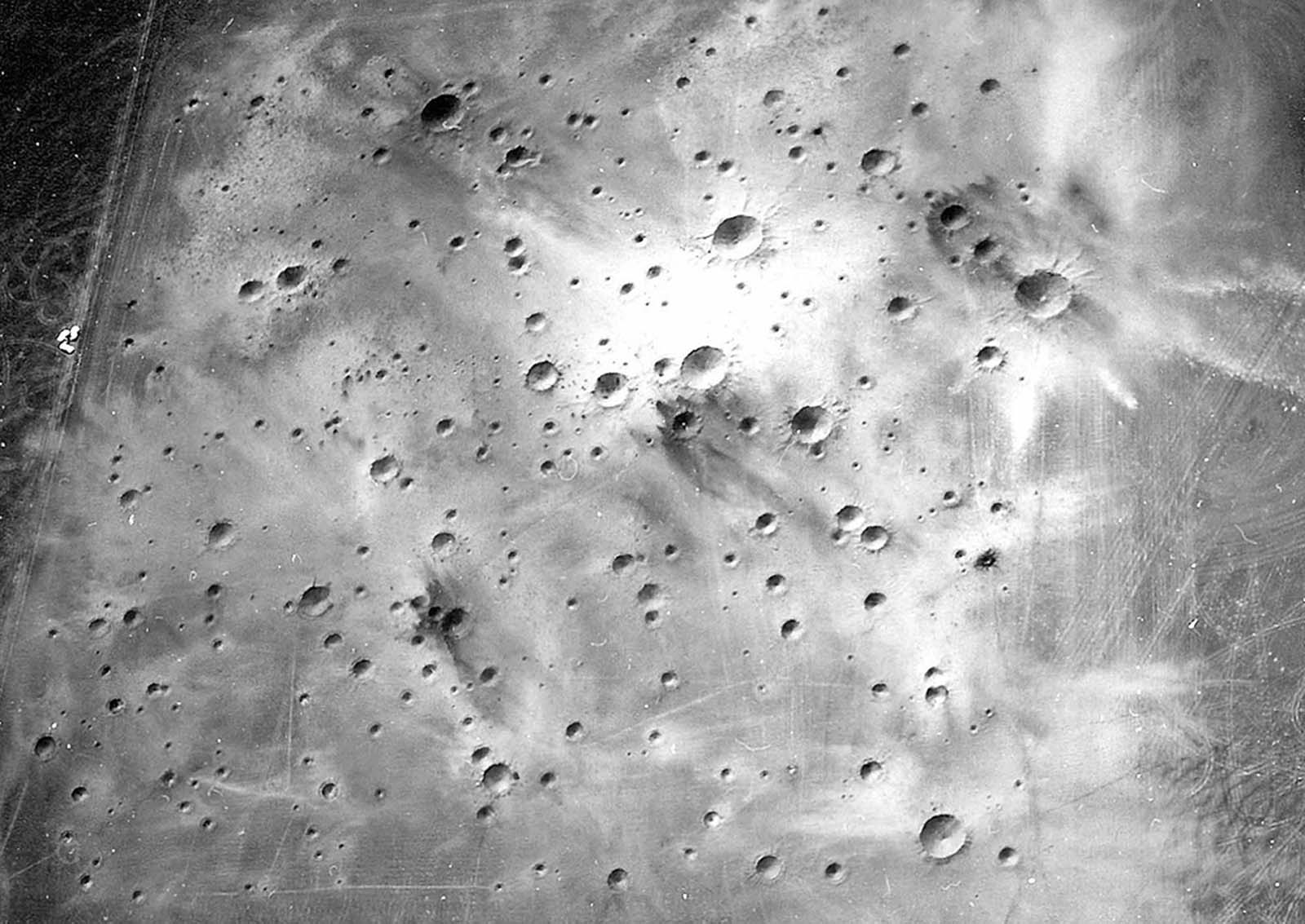 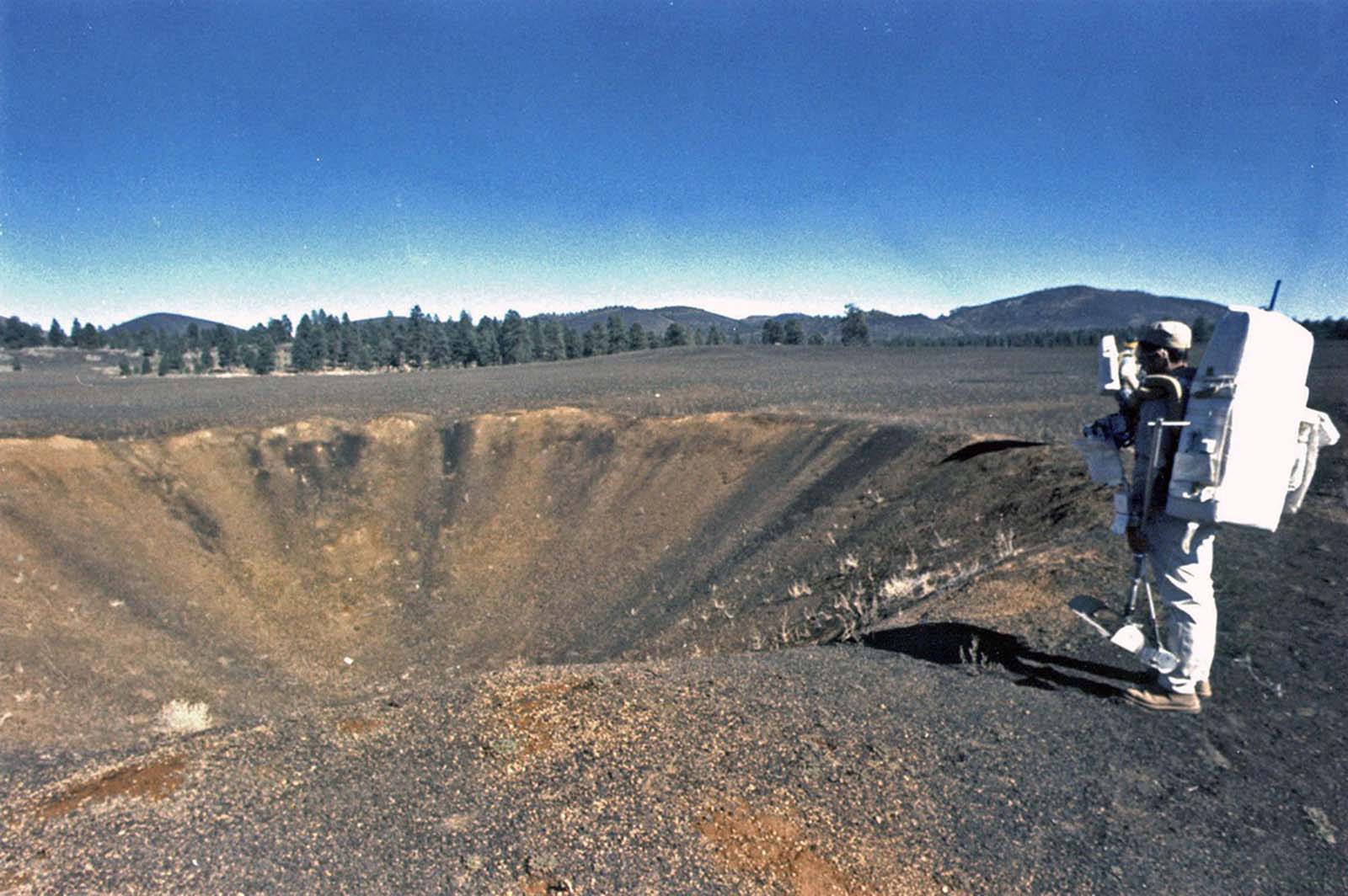 The astronauts Harrison Schmitt and Gene Cernan view a crater within the Cinder Lake Crater Field. Both men went on to walk on the surface of the moon in 1972, during Apollo 17. 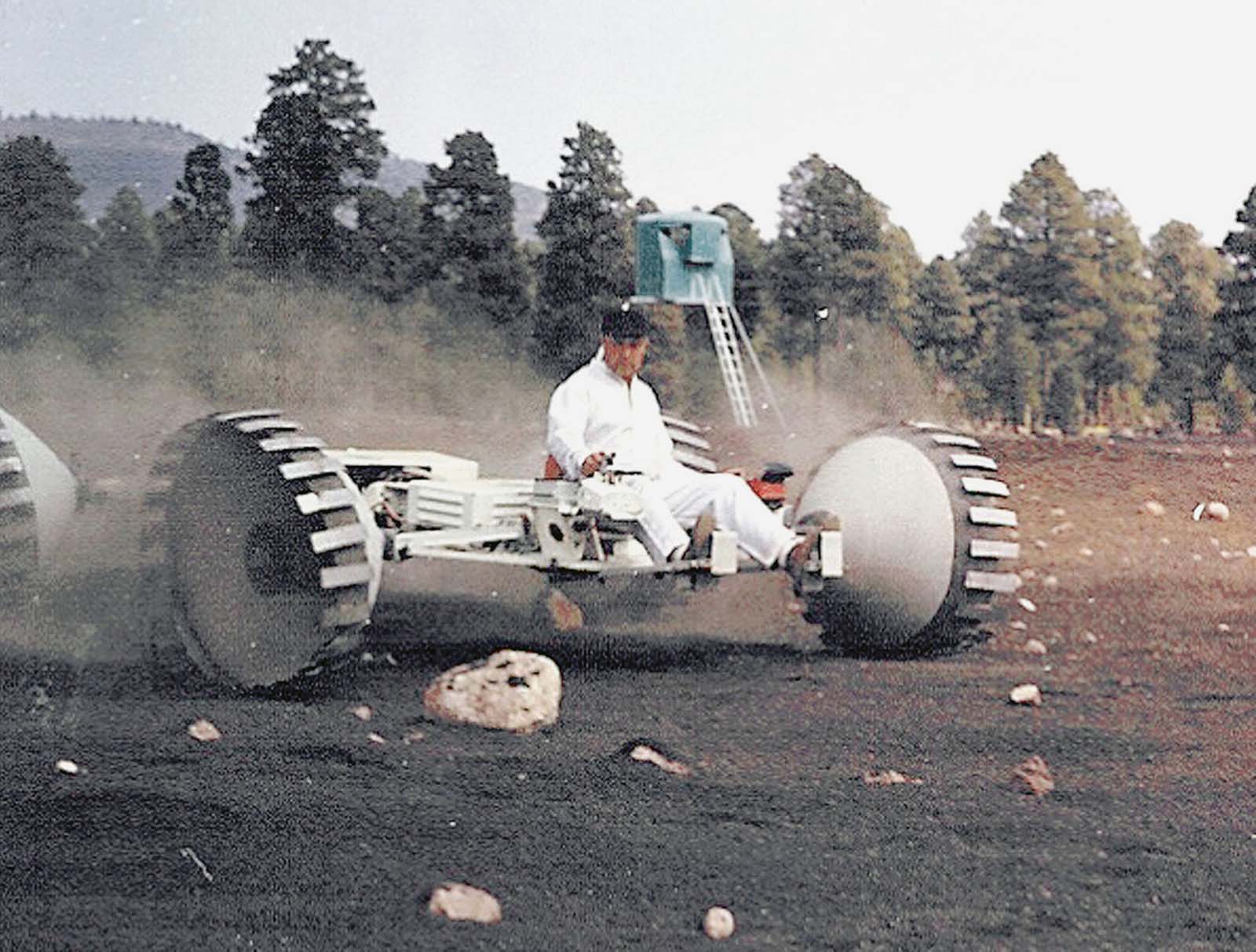 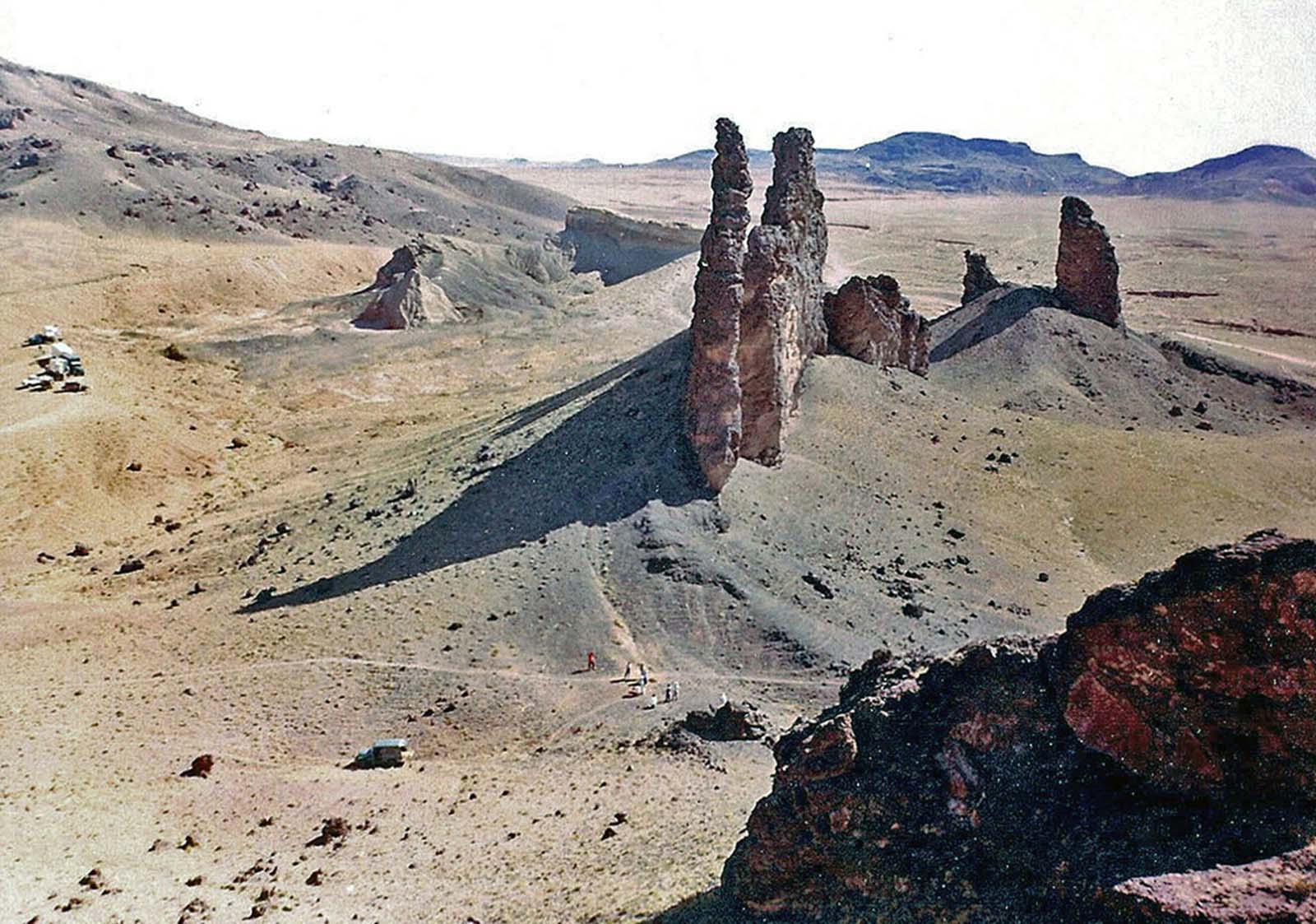 An overview of what was referred to as “Apollo dike,” where early Apollo-suit tests were held, in Hopi Buttes, Arizona, in May 1966. 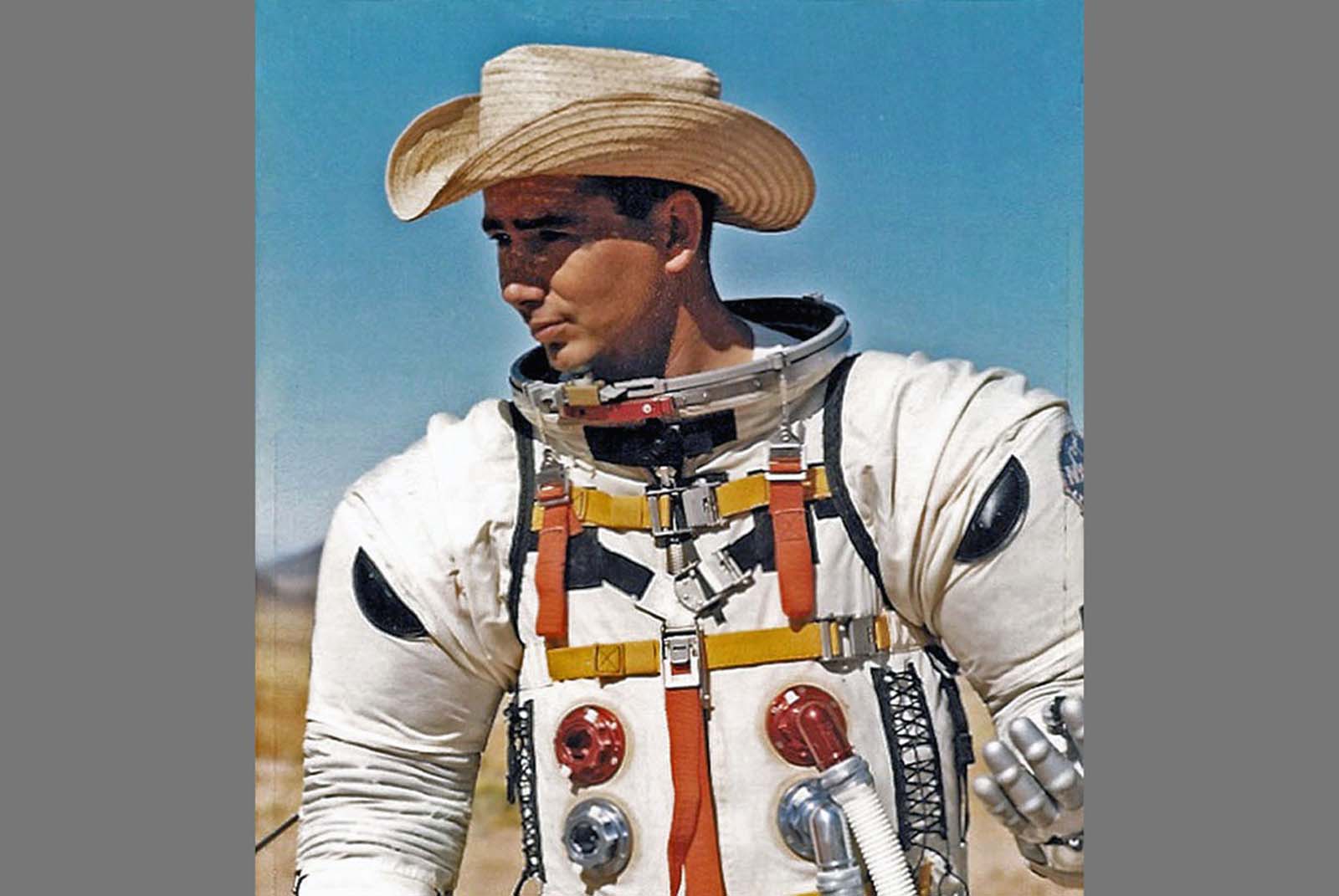 The USGS geologist Joe O’Connor wears an early version of the Apollo spacesuit during testing in the fall of 1965, at Apollo mesa dike in the Hopi Buttes volcanic field in Arizona. 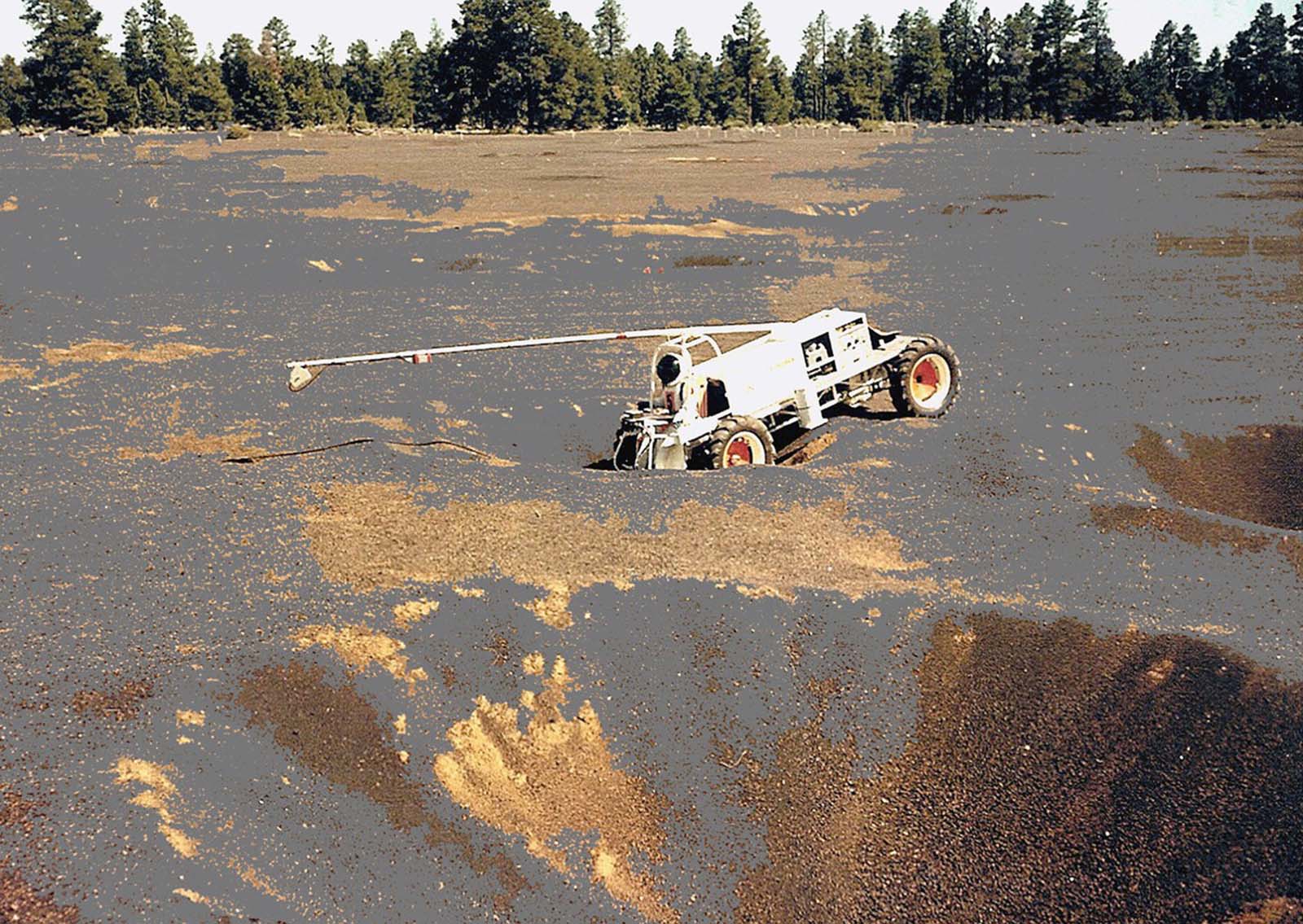 The Explorer vehicle negotiates a crater in the crater field. 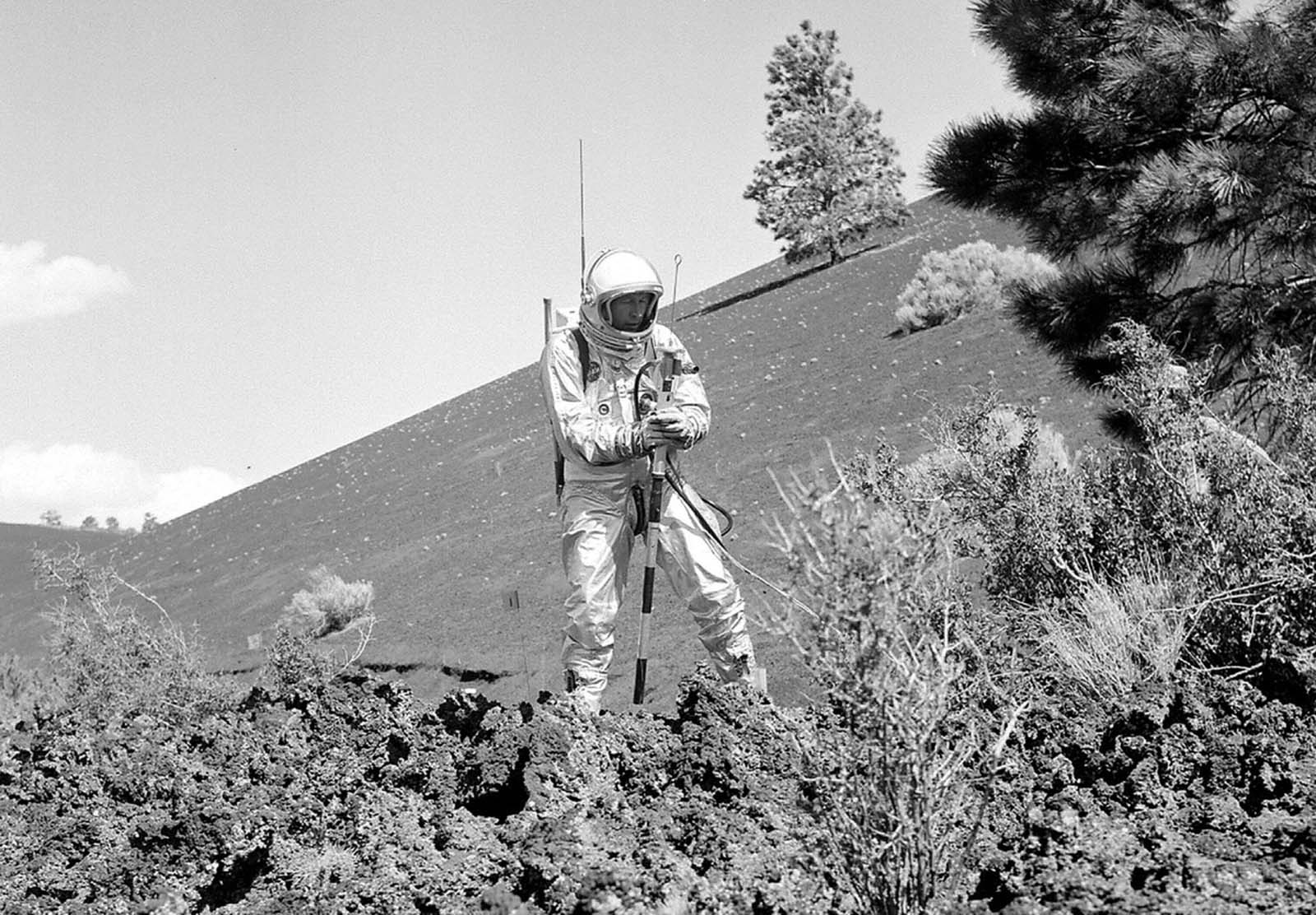 A suited subject stands on the edge of the Bonito Lava Flow near Arizona’s Sunset Crater volcano, with an early concept of a “lunar staff” with a sun compass on top. 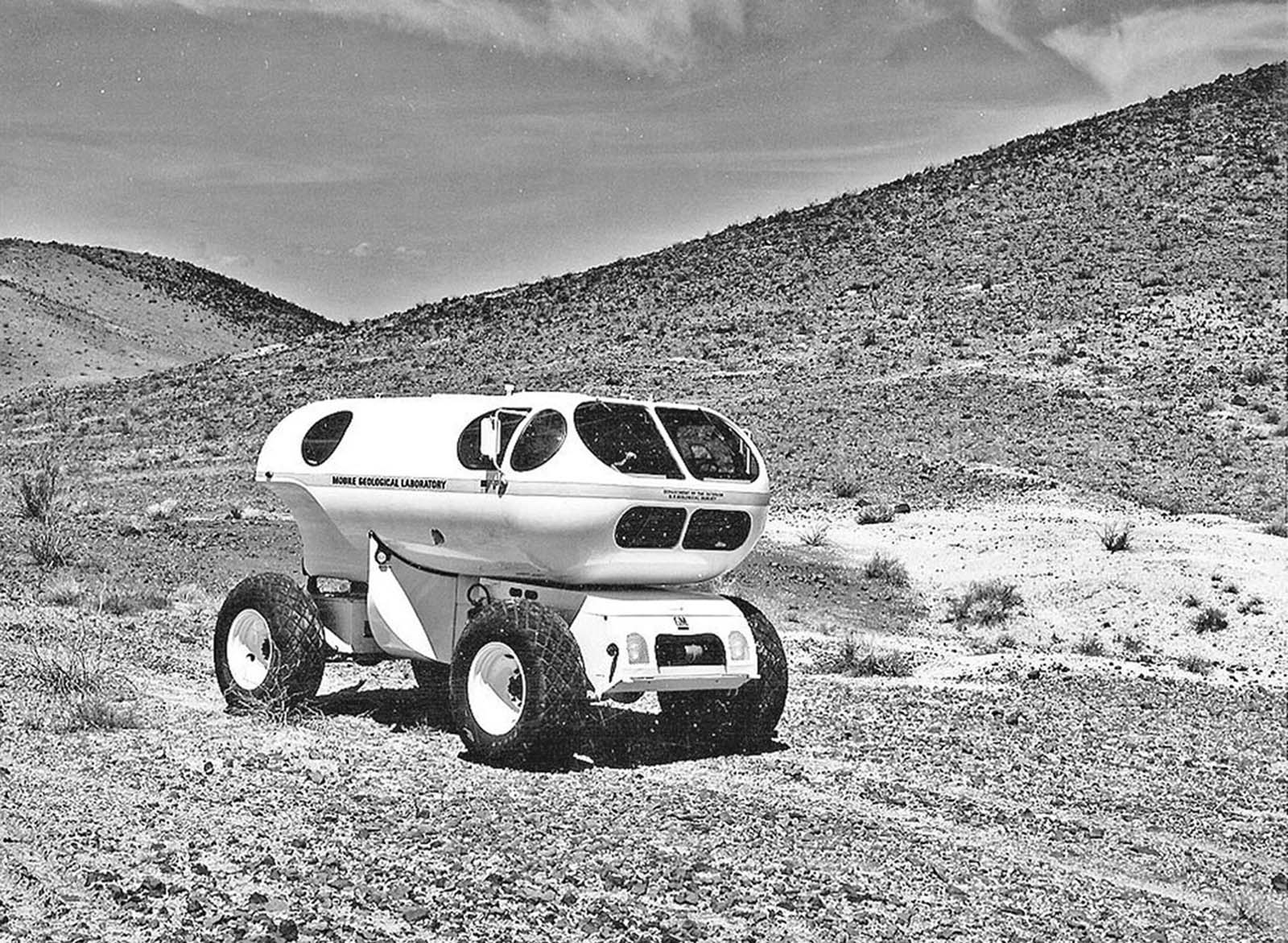 The Mobile Geological Laboratory, or MOLAB, an early-concept lunar vehicle, tests at Merriam Crater, northeast of Flagstaff, Arizona, in 1966. 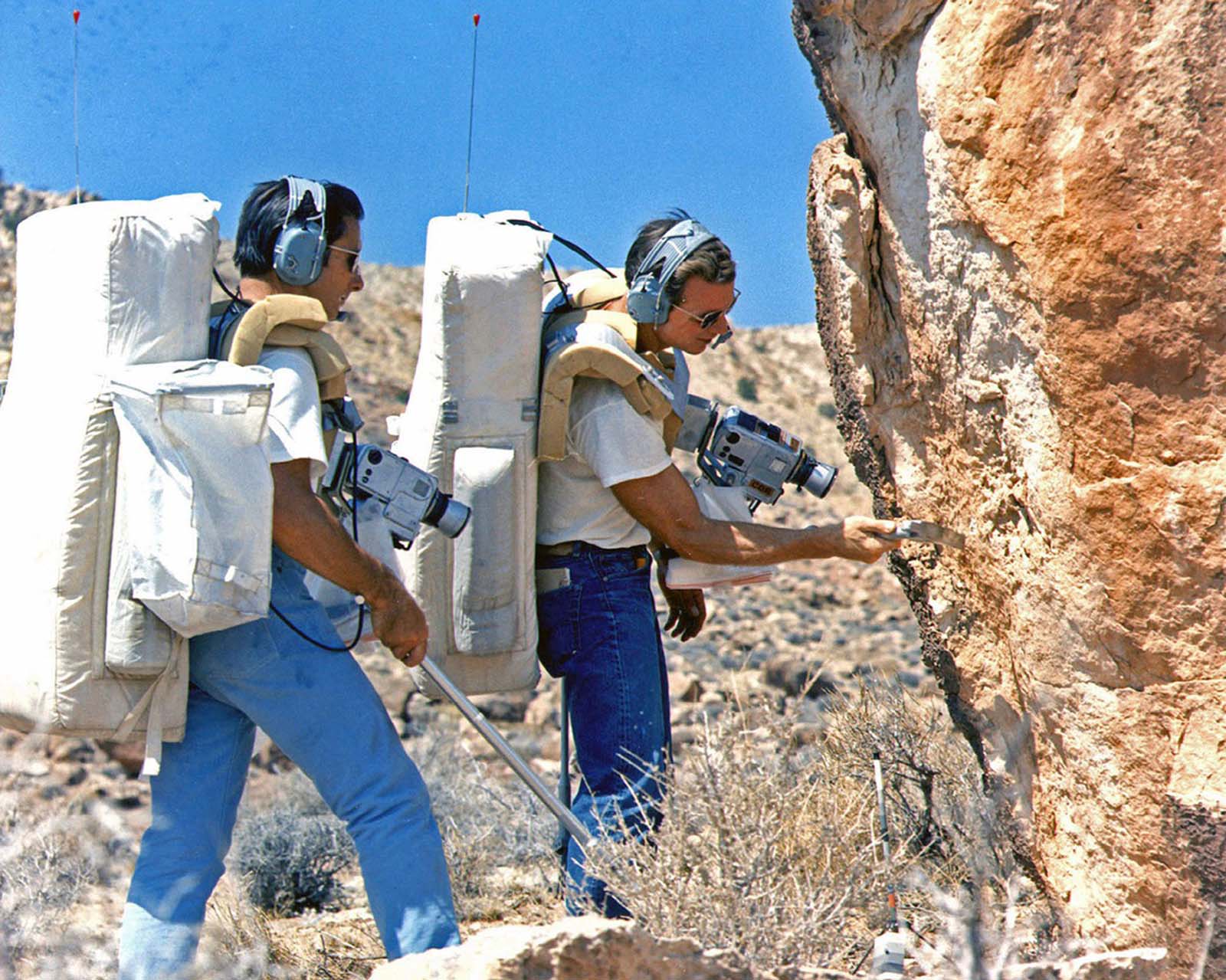 The astronauts Jim Irwin and Dave Scott check out an outcrop during the final geology exercise for the Apollo 15 prime and backup crew at Coconino Point, Arizona, on June 25, 1971. Both men went on to walk on the surface of the moon in 1971, during Apollo 15. 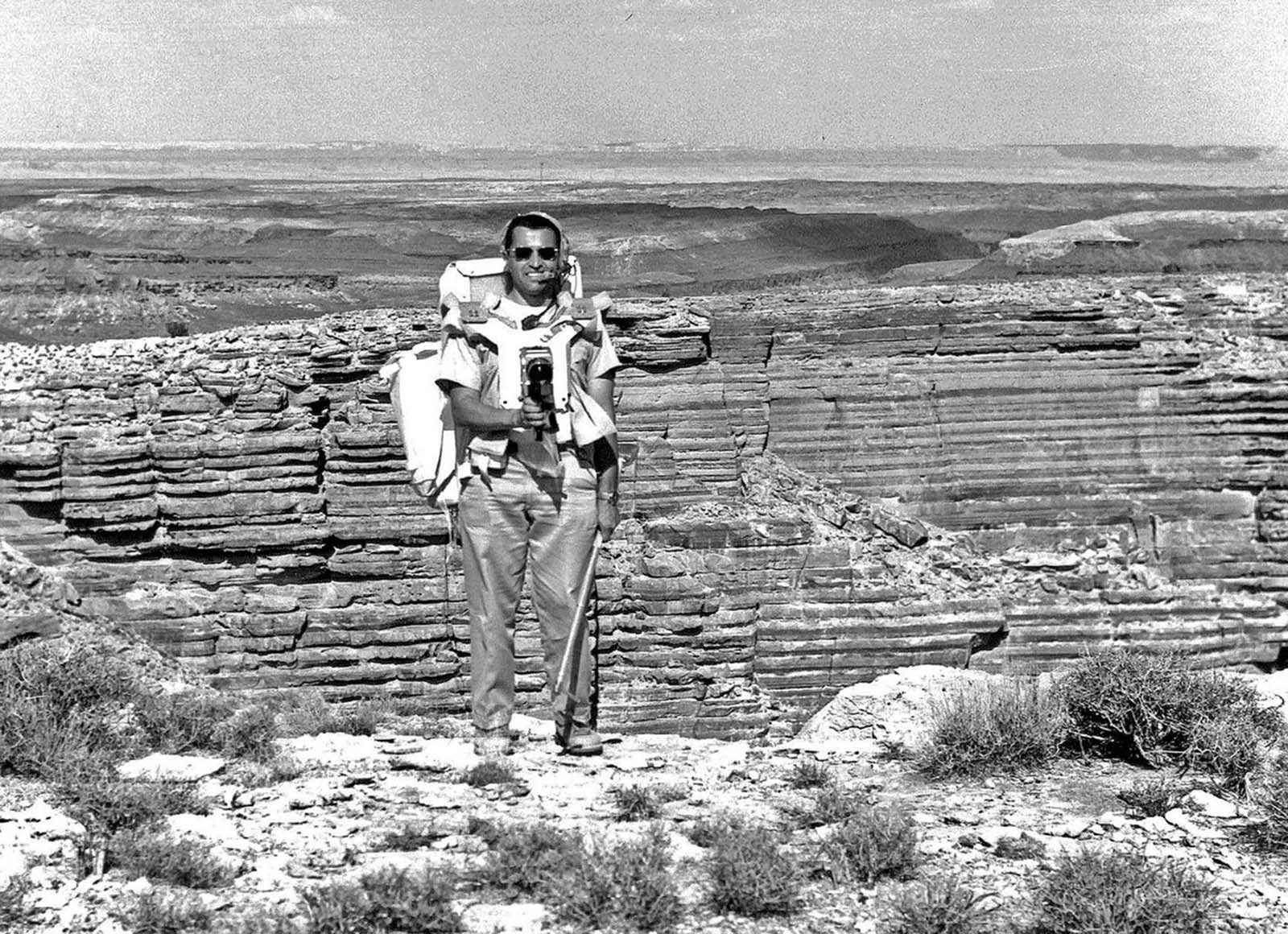 The Apollo 17 astronaut Harrison Schmitt stands on the edge of an erosional canyon that was used to simulate the large Hadley Rille at the Apollo 15 landing site. Schmitt was originally part of the Apollo 15 backup crew, and later slated to fly in Apollo 18. When that mission was canceled, Schmitt was moved up to Apollo 17 due to his previous work and studies as a professional geologist. 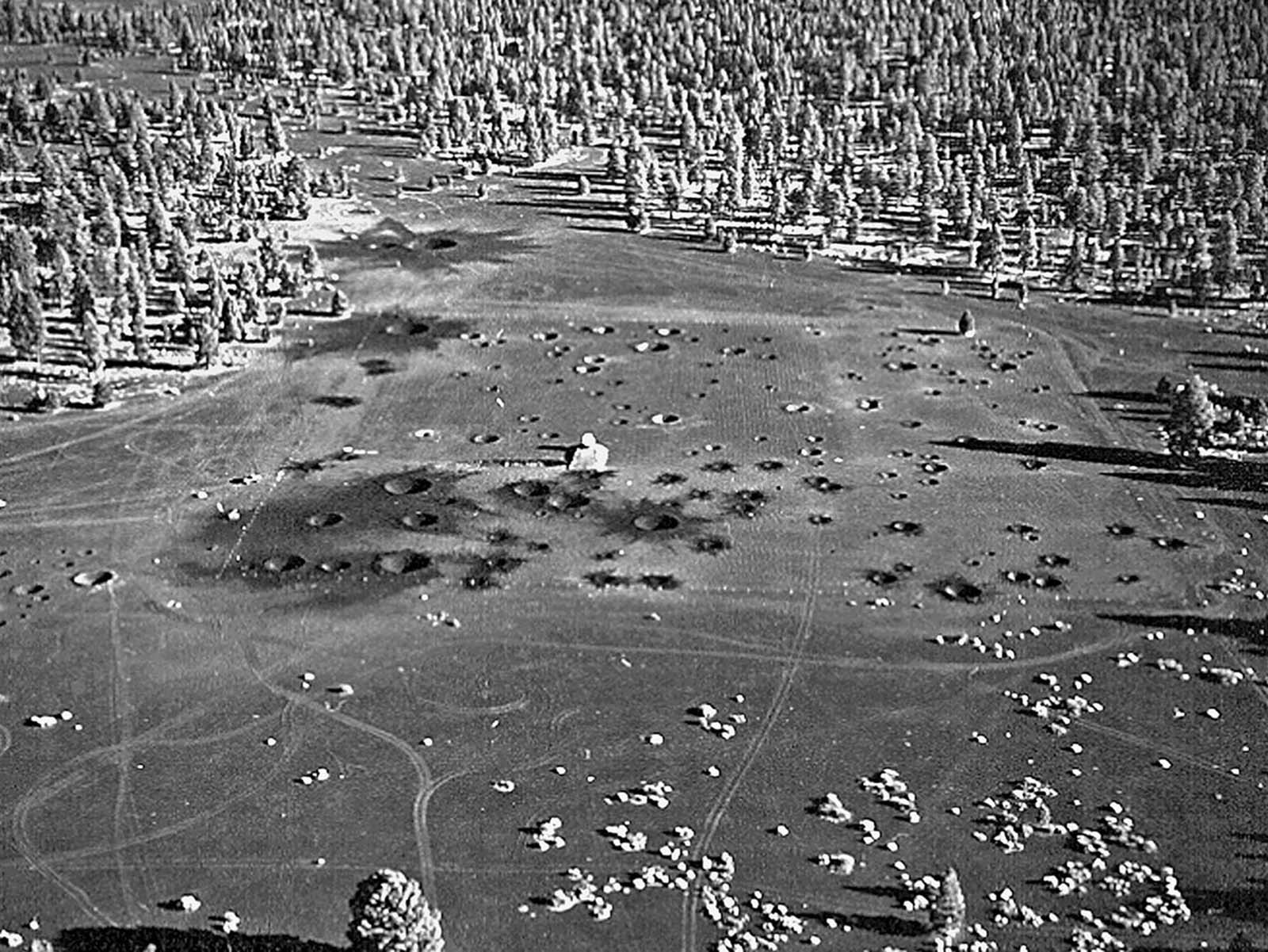 Cinder Lake Crater Field #1, photographed after an additional 96 craters were added in October 1967. 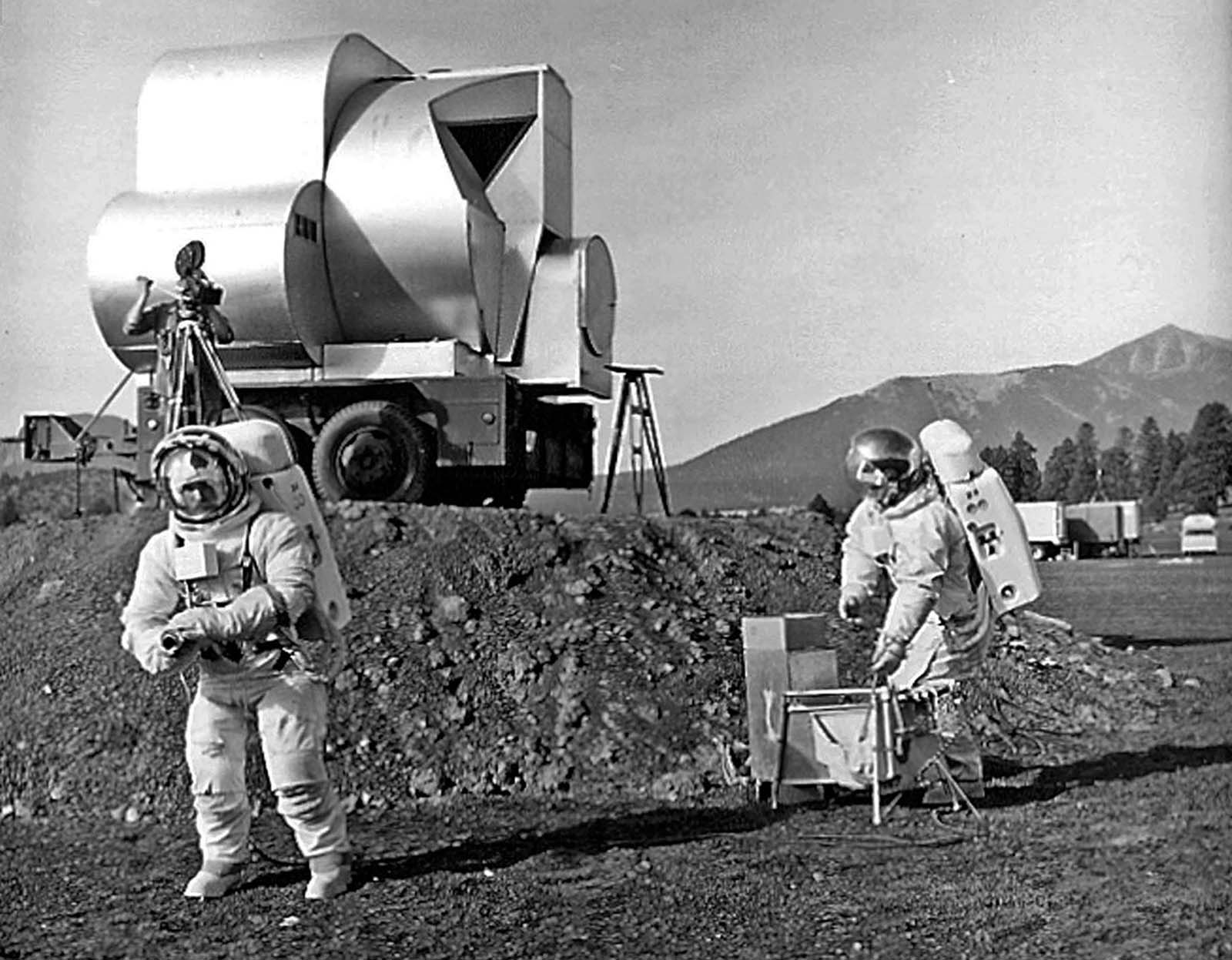 The USGS geologists Tim Hait and David Schleicher work in spacesuits during an early Apollo field test at Cinder Lake Crater Field #1, with a simulated lunar-module ascent stage mock-up parked on an earthen ramp in the background. 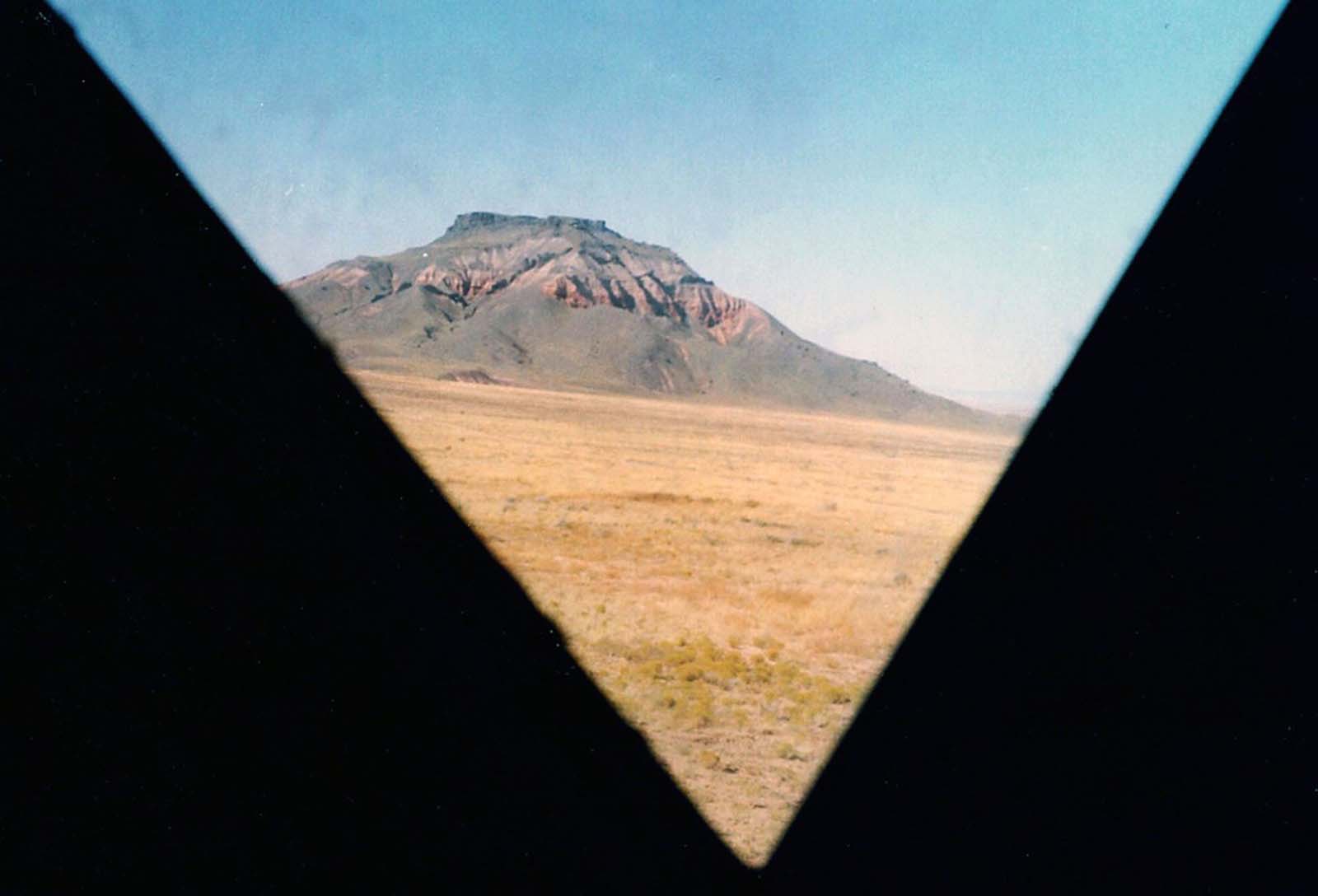 A view of Chezhin Chotah Butte as seen from inside the lunar-module mock-up through one of two triangular windows, photographed in 1965. 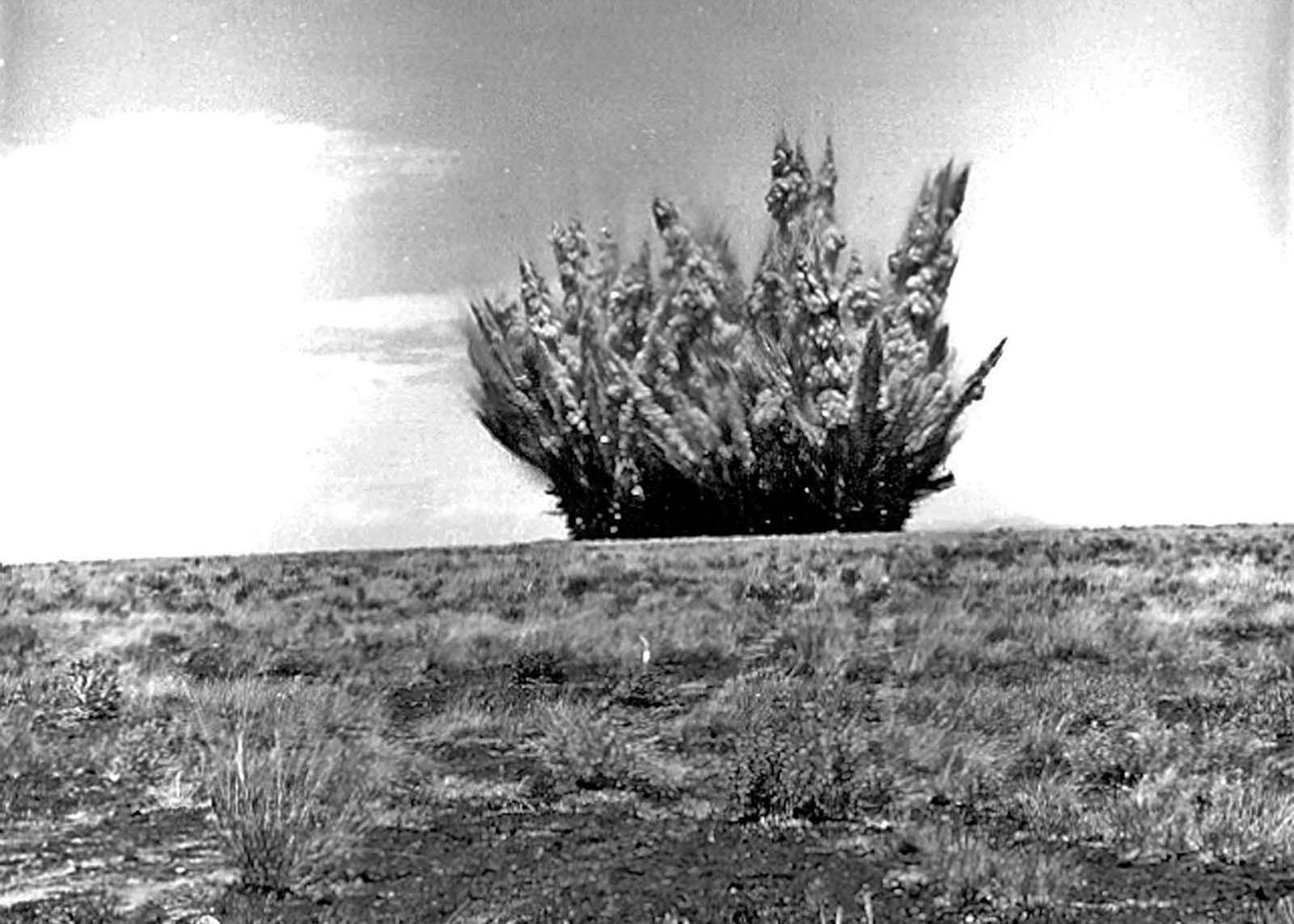 An explosion makes a large test crater on the surface of Black Point lava flow on August 1, 1968, along the Little Colorado River, north of Flagstaff, Arizona. 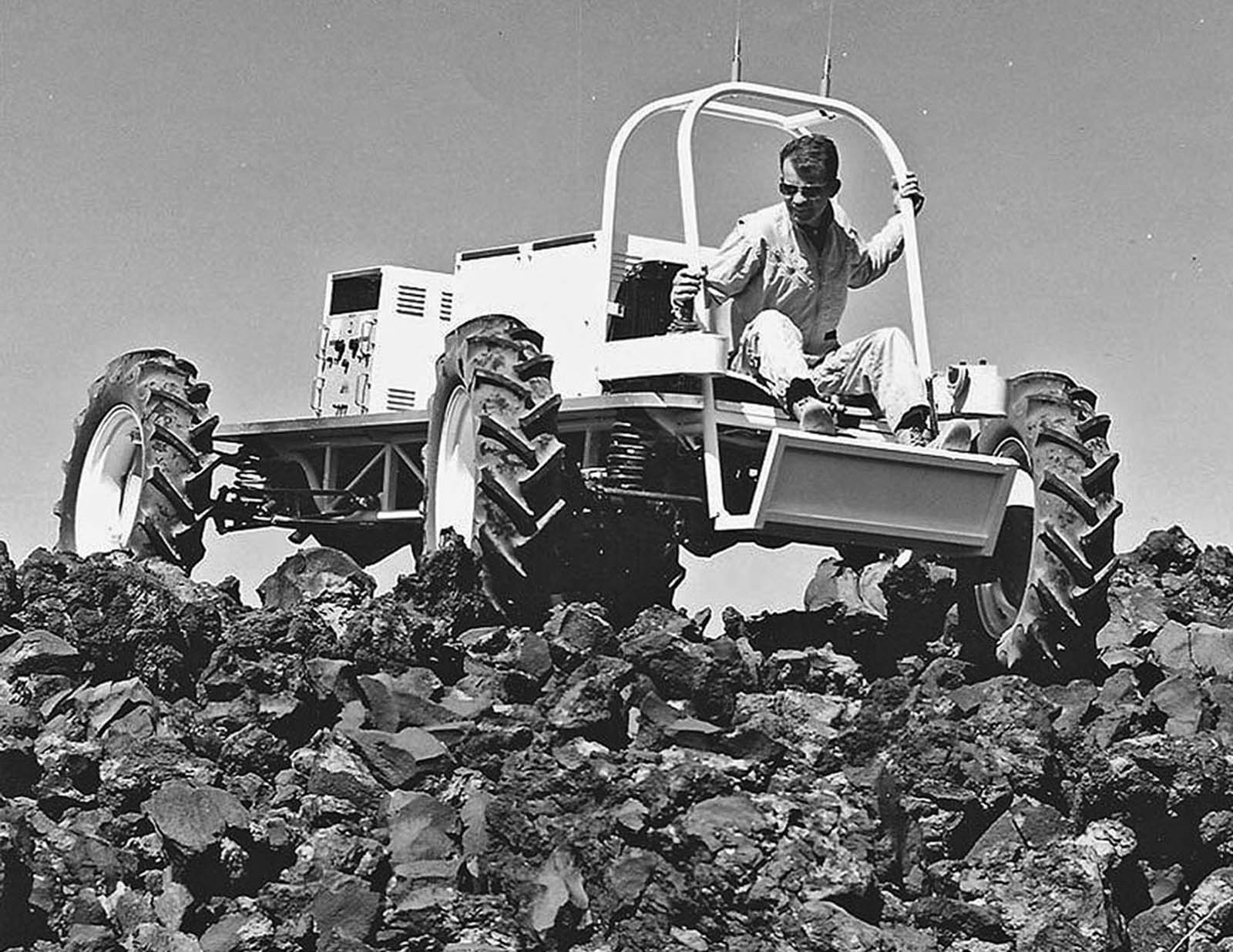 The hand-constructed Explorer vehicle, made by the astrogeology branch of USGS, is field tested in June 1967 on an extremely blocky lava flow just west of Hank’s Trading Post, near Flagstaff, Arizona. 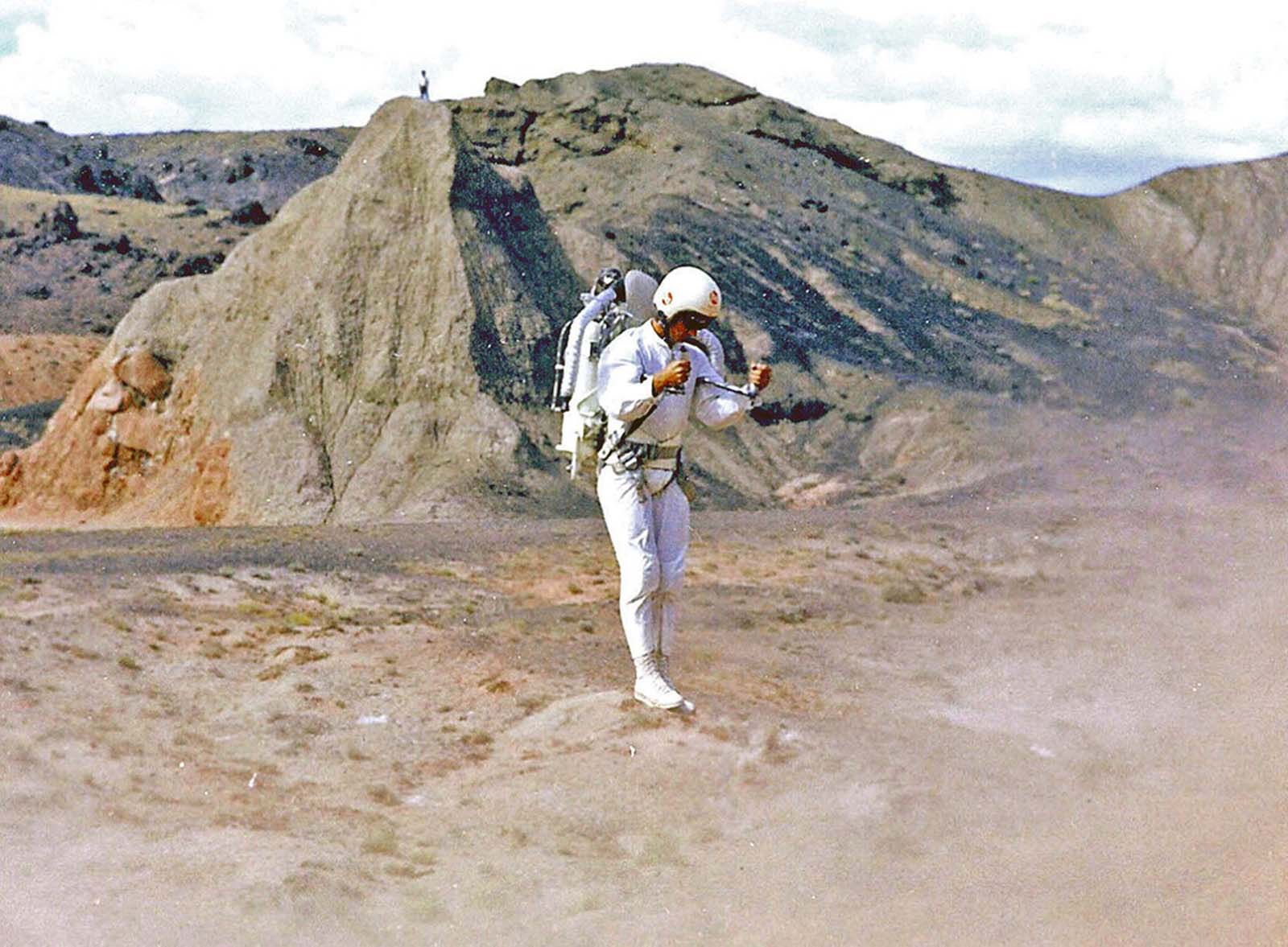 A demonstration of the rocket belt made by Bell Aerosystems, during Apollo training. 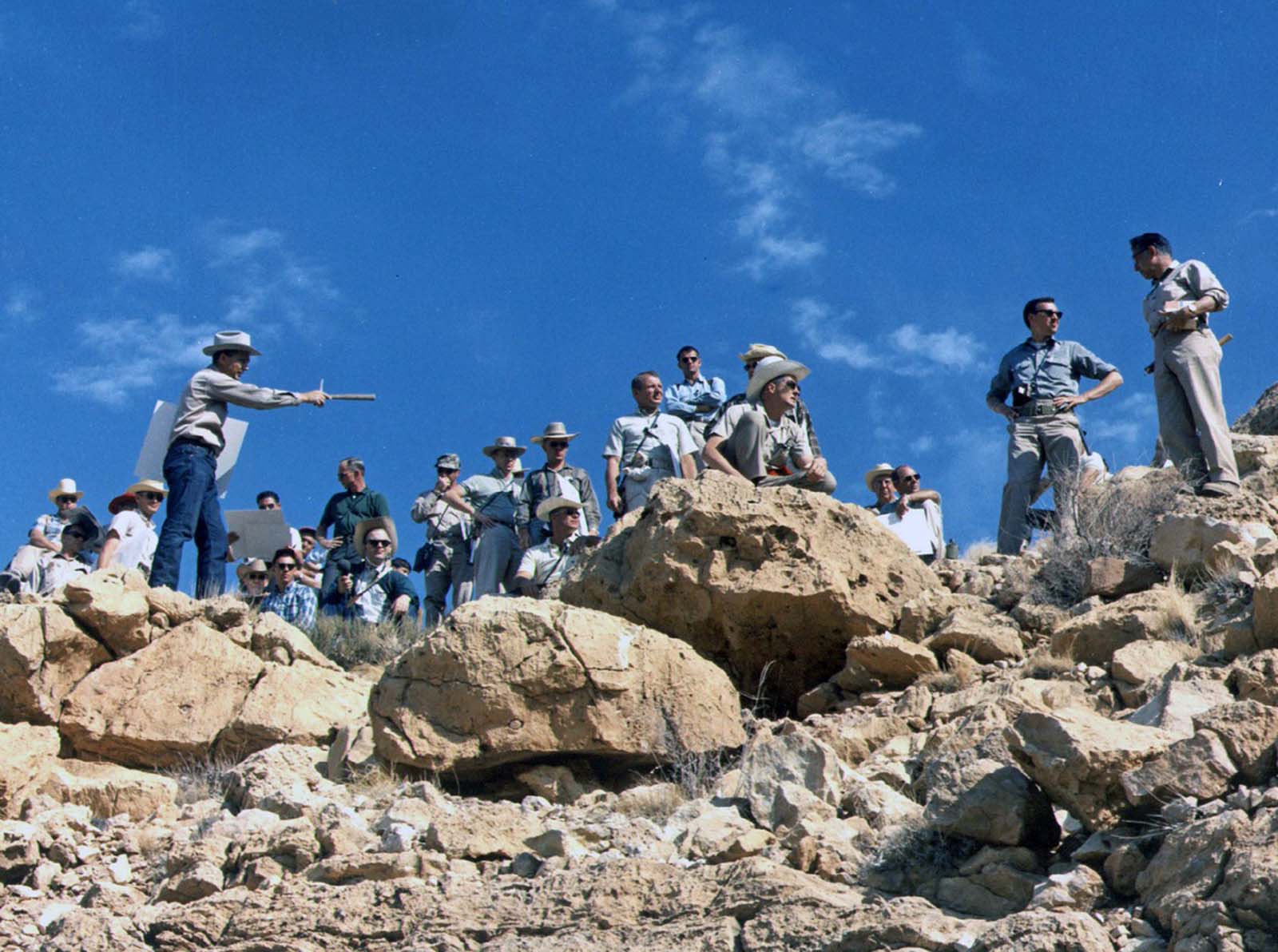 The astrogeologist Gene Shoemaker describes the geology of the rim ejecta of Arizona’s Meteor Crater to a large group of astronauts during a field trip in May 1967. 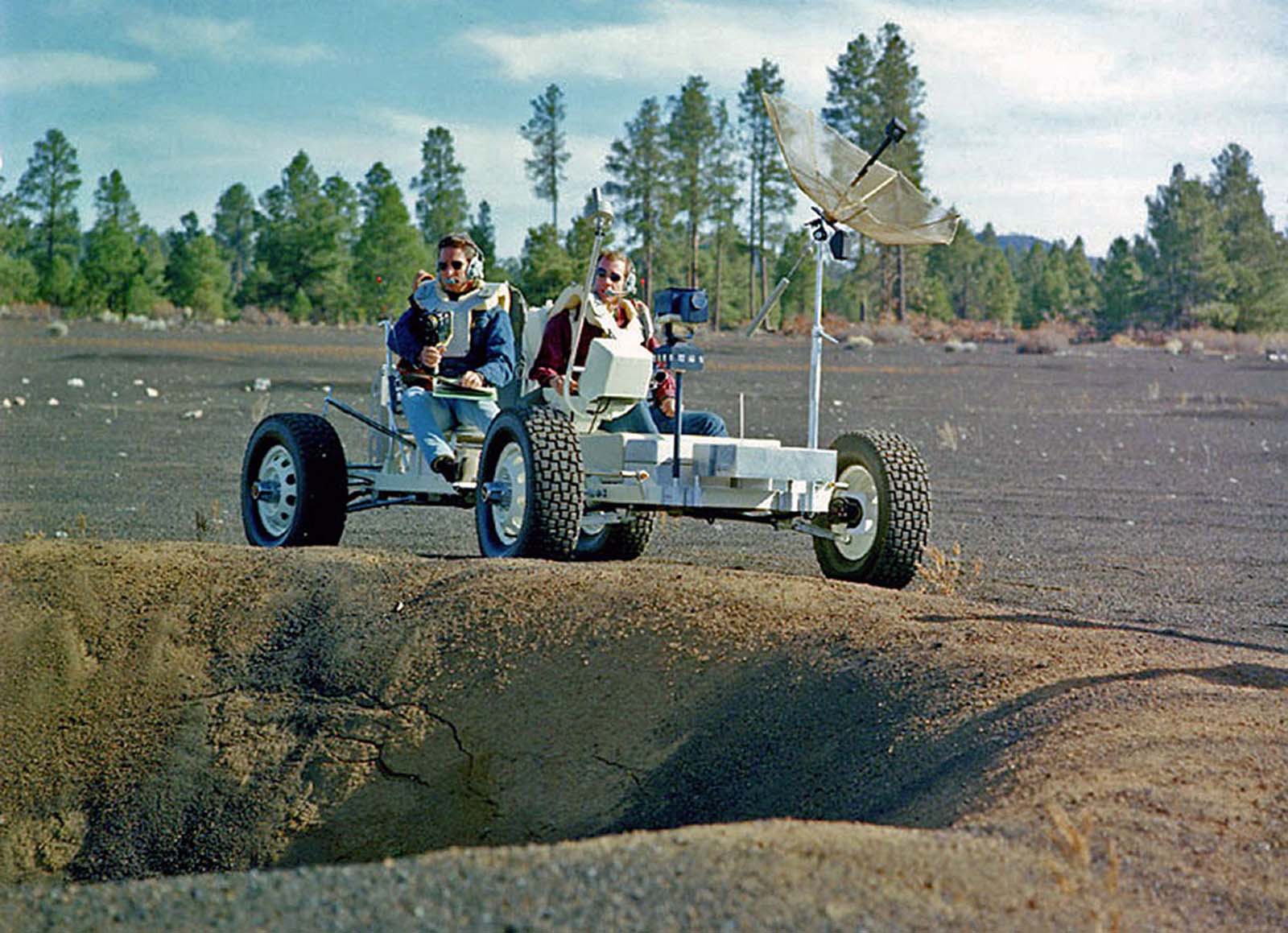 The astronauts Jim Irwin and Dave Scott pilot Grover near the rim of a large crater in the Cinder Lake Crater Field. 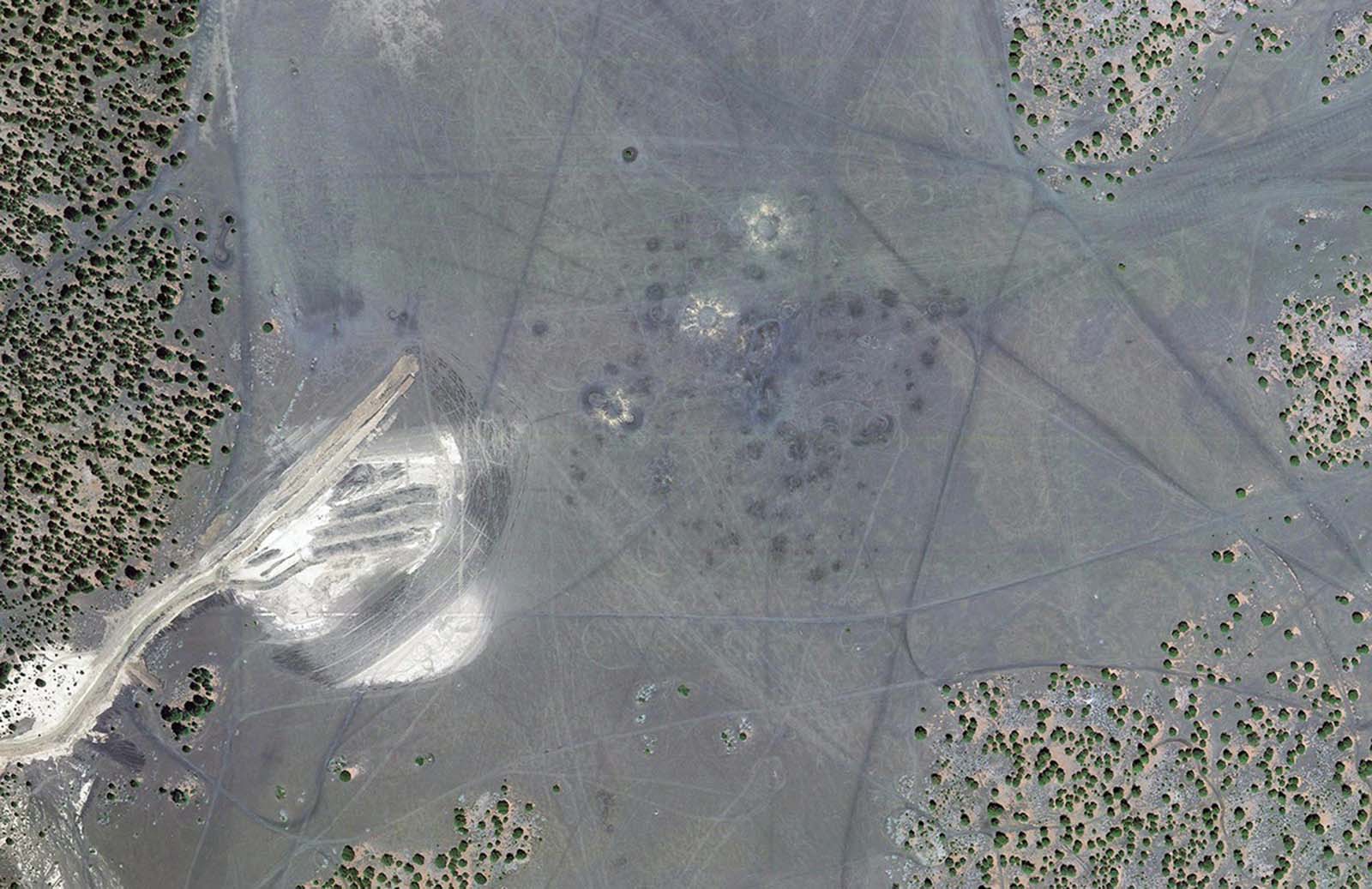 A modern satellite view, made in 2011, of Cinder Lake Crater Field #2, north of Flagstaff, Arizona, decades after its use as a lunar training location.