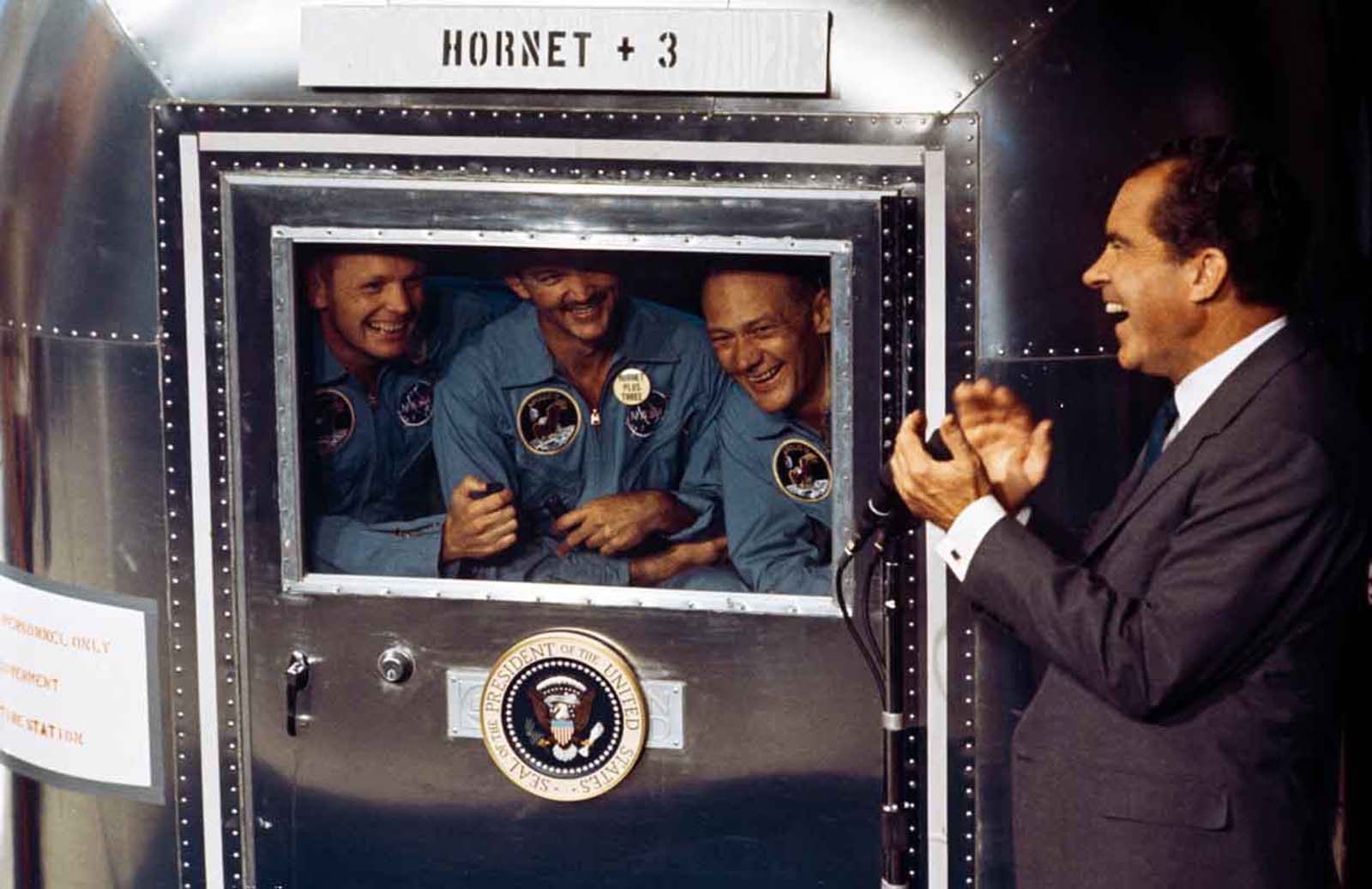 From left to right, Neil Armstrong, Michael Collins and Edwin ‘Buzz’ Aldrin Jnr, the crew of the historic Apollo 11 moon landing mission are subjected to a period of quarantine upon their return to earth. Through the window of their Mobile Quarantine Facility, they hold a conversation with President Richard Nixon.

When planning the Apollo 11 mission to the moon, NASA had thought about every possible detail including a gloomy scenario: What if the astronaut returning home unleashed upon Earth something dangerous and foreign to science — moon germs?

Before Apollo 11 set out, NASA couldn’t be positive that, if bits of dust or potential microorganisms got loose back home, life on Earth would be safe. Needless to say, accidentally setting a lunar plague loose on the inhabitants of Earth would have erased all the good publicity garnered by accomplishing the moon landing in the first place.

Just in case, in addition to the protections they were establishing to make sure the moon rocks remained free of terrestrial contamination, NASA decided to establish a three-week quarantine for the crew of Apollo 11.

Following their arrival in Houston on July 27, 1969, Apollo 11 astronauts Neil A. Armstrong, Edwin E. “Buzz” Aldrin, and Michael Collins were restricted to the Mobile Quarantine Facility. 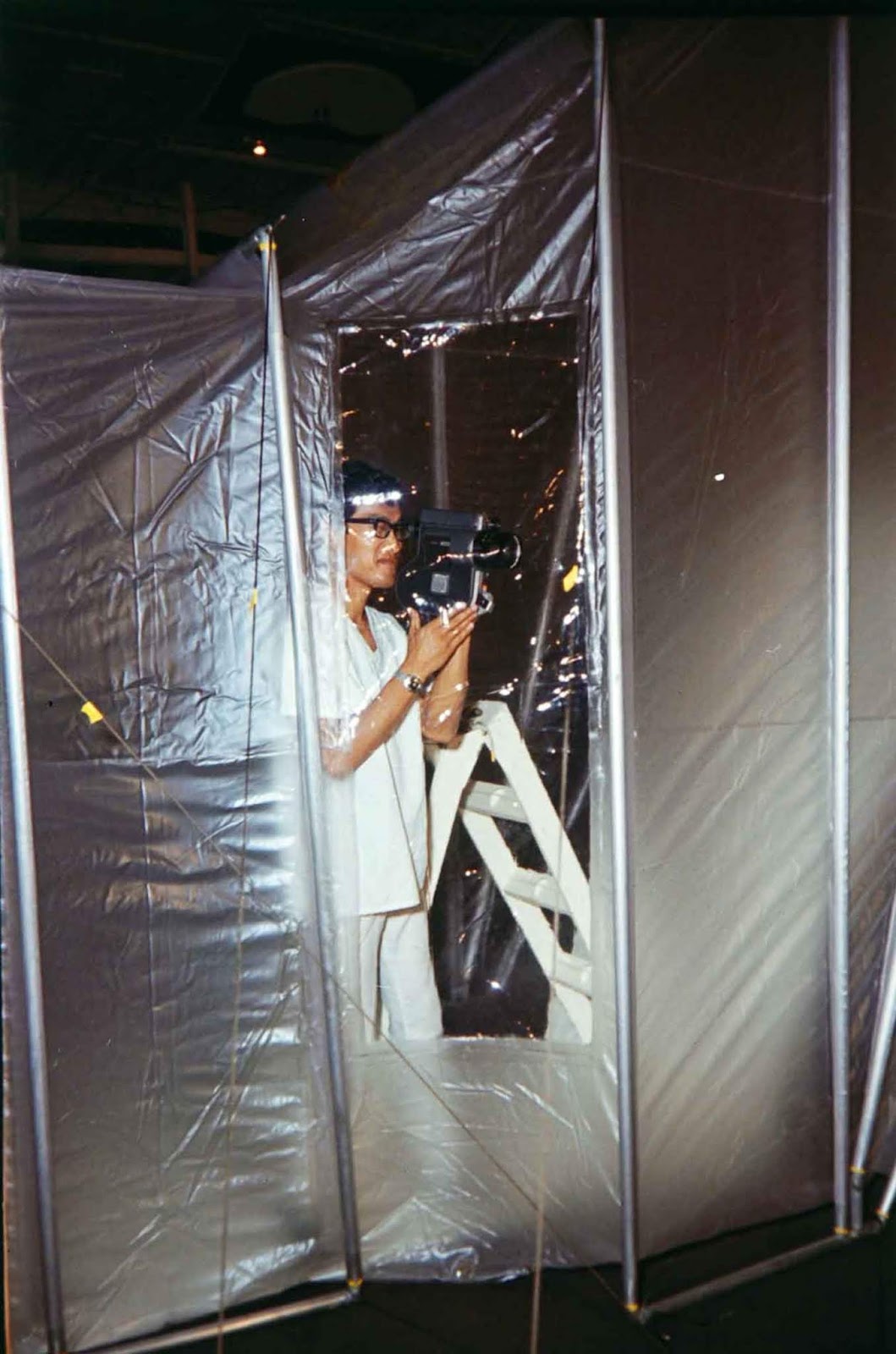 Their spacecraft, the Apollo 11 Command Module Columbia as well as the 49 pounds of lunar samples they brought back were likewise kept in quarantine, which was to last 21 days from the time they were first exposed to lunar material.

During their time in the LRL, they conducted numerous debriefs from a glass-enclosed conference room, wrote their pilot reports, and celebrated Armstrong’s 39th birthday with a surprise party.

The Mobile Quarantine Facility (MQF) was basically a massive Airstream-esque trailer on an aircraft carrier. It was so big, it had its own lounge and library, and could accommodate up to 100 people. In comparison to the landing module, the MQF was a palace.

Supported by a team of 20, the astronauts were visited by none other than President Nixon. Finally, having served three weeks in isolation, when no moon disease appeared, Collins, Aldrin and Armstrong were released onto Terra Firma. 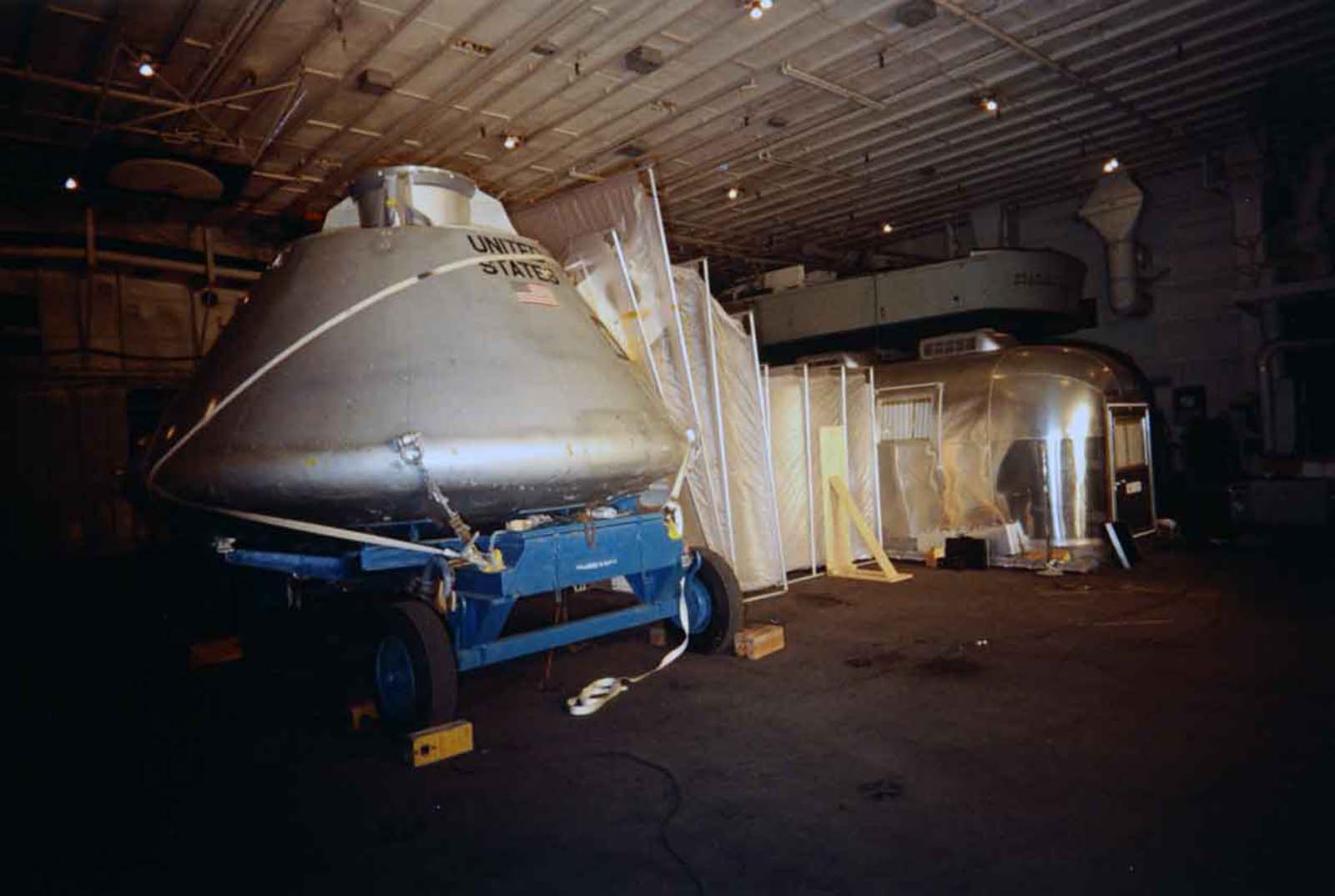 Inside the mobile quarantine facility for Apollo 11. 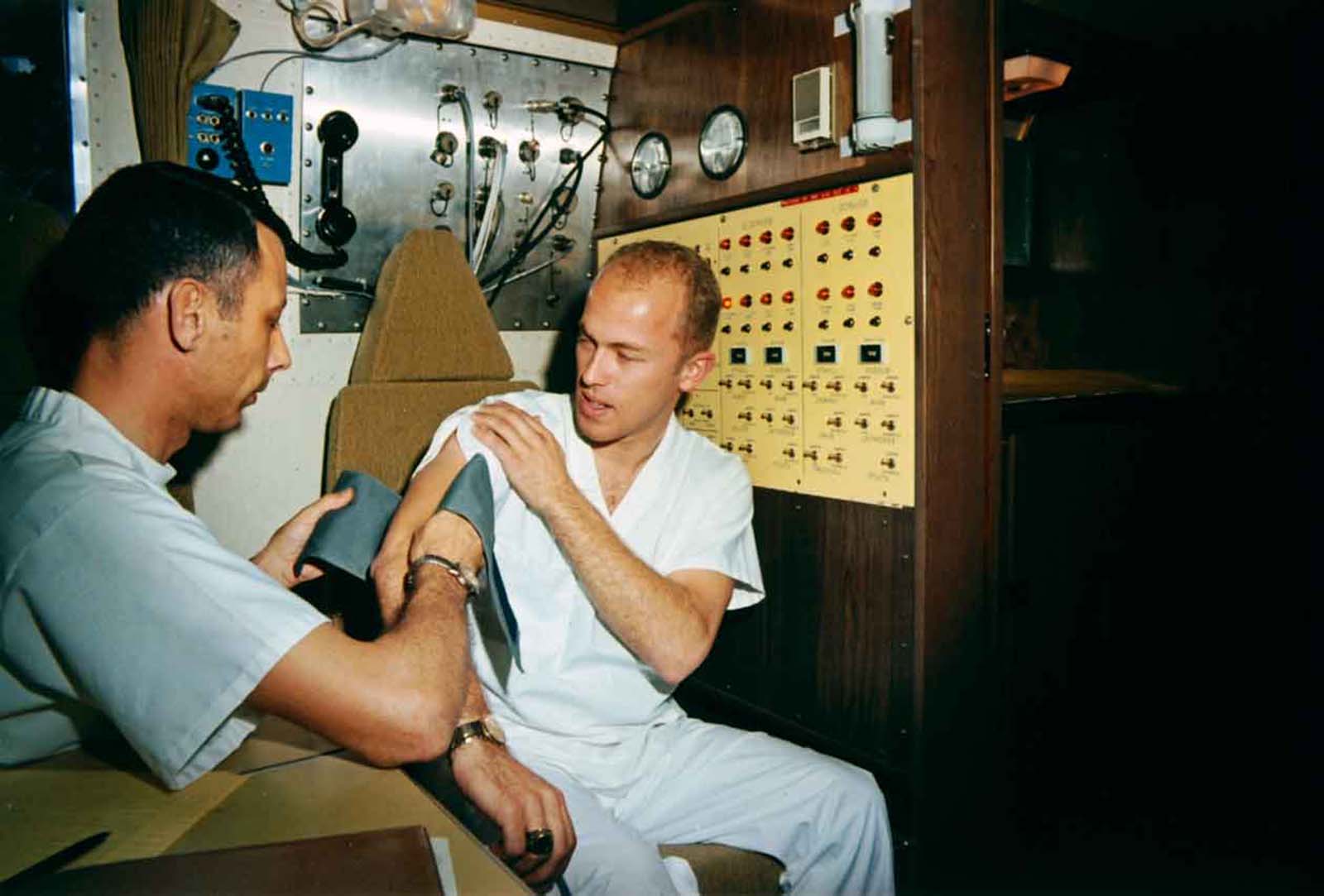 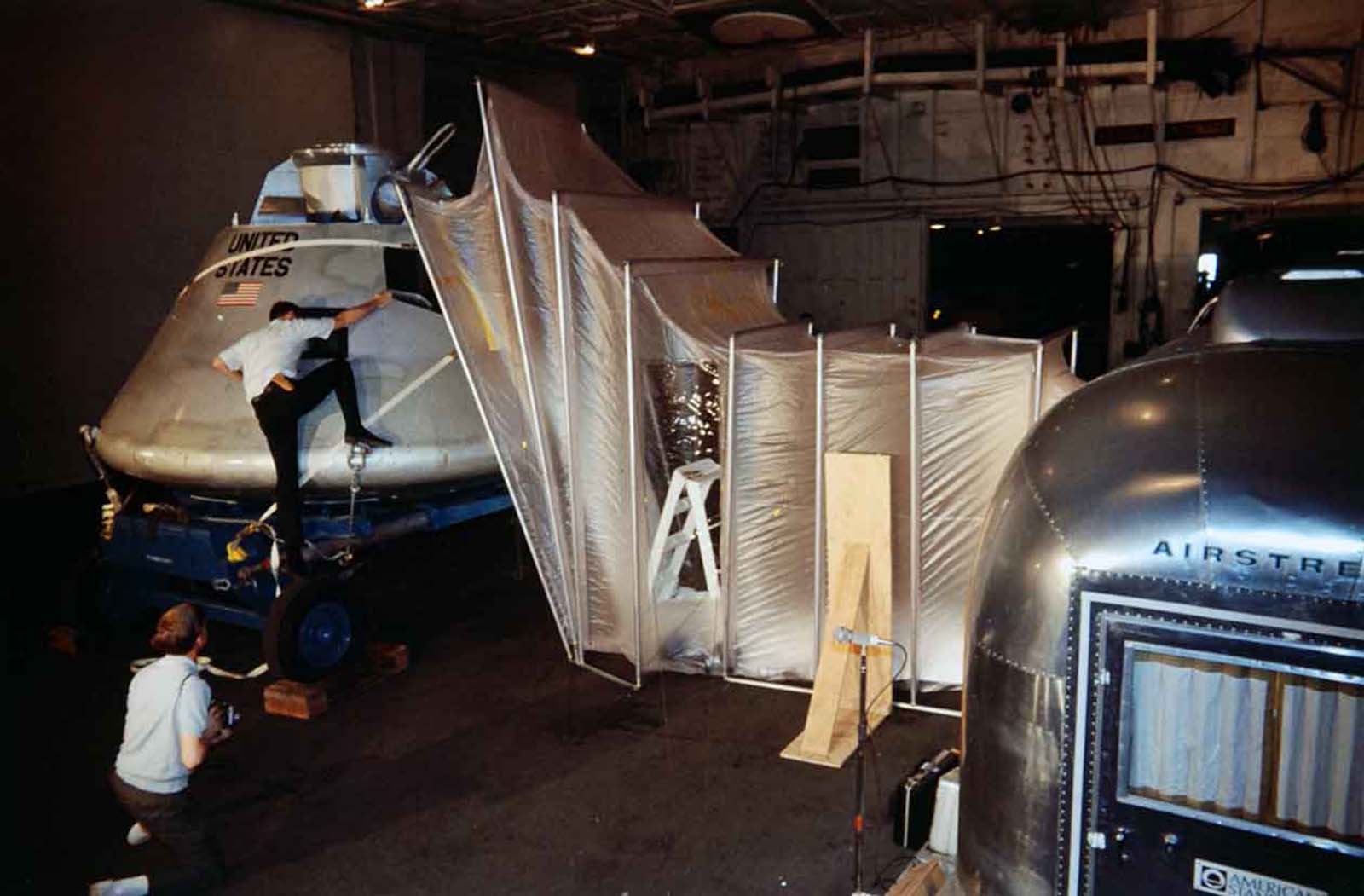 Man climbing at the Apollo Command Module inside the Mobile Quarantine Facility. 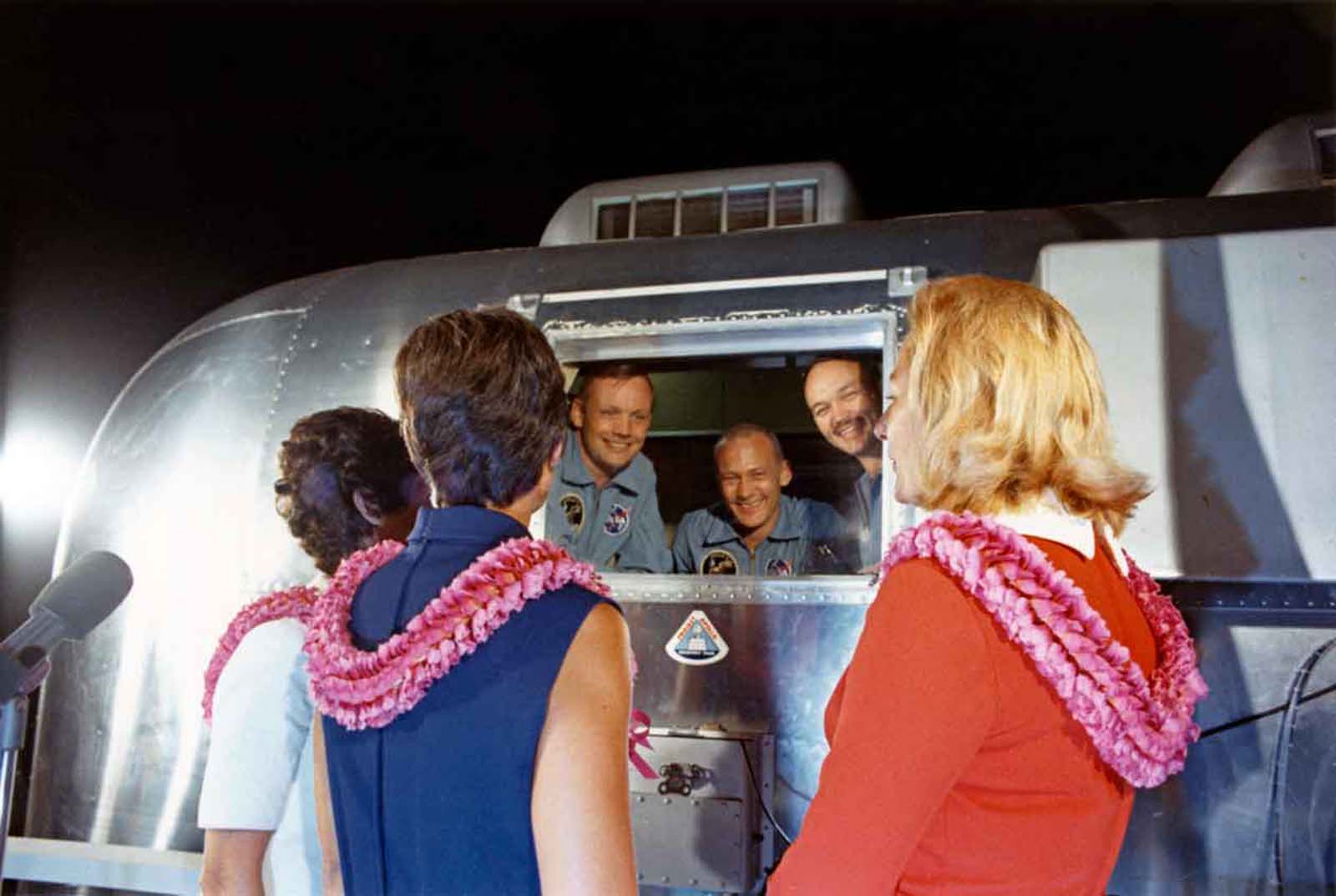 The three crew members of NASA’s Apollo 11 lunar landing mission are greeted by their wives after their arrival at Ellington Air Force Base near Houston in Texas in a Mobile Quarantine Facility (MQF) earlier that day, 27th July 1969. From left to right, astronauts Neil A Armstrong, Edwin E ‘Buzz’ Aldrin Jr and Michael Collins and their wives (left to right) Pat Collins, Jan Armstrong and Joan Aldrin. The crew remained in the MQF until they arrived at the Crew Reception Area of the Lunar Receiving Laboratory (LRL) at the Manned Spacecraft Center (MSC). They will be released from quarantine on 11th August 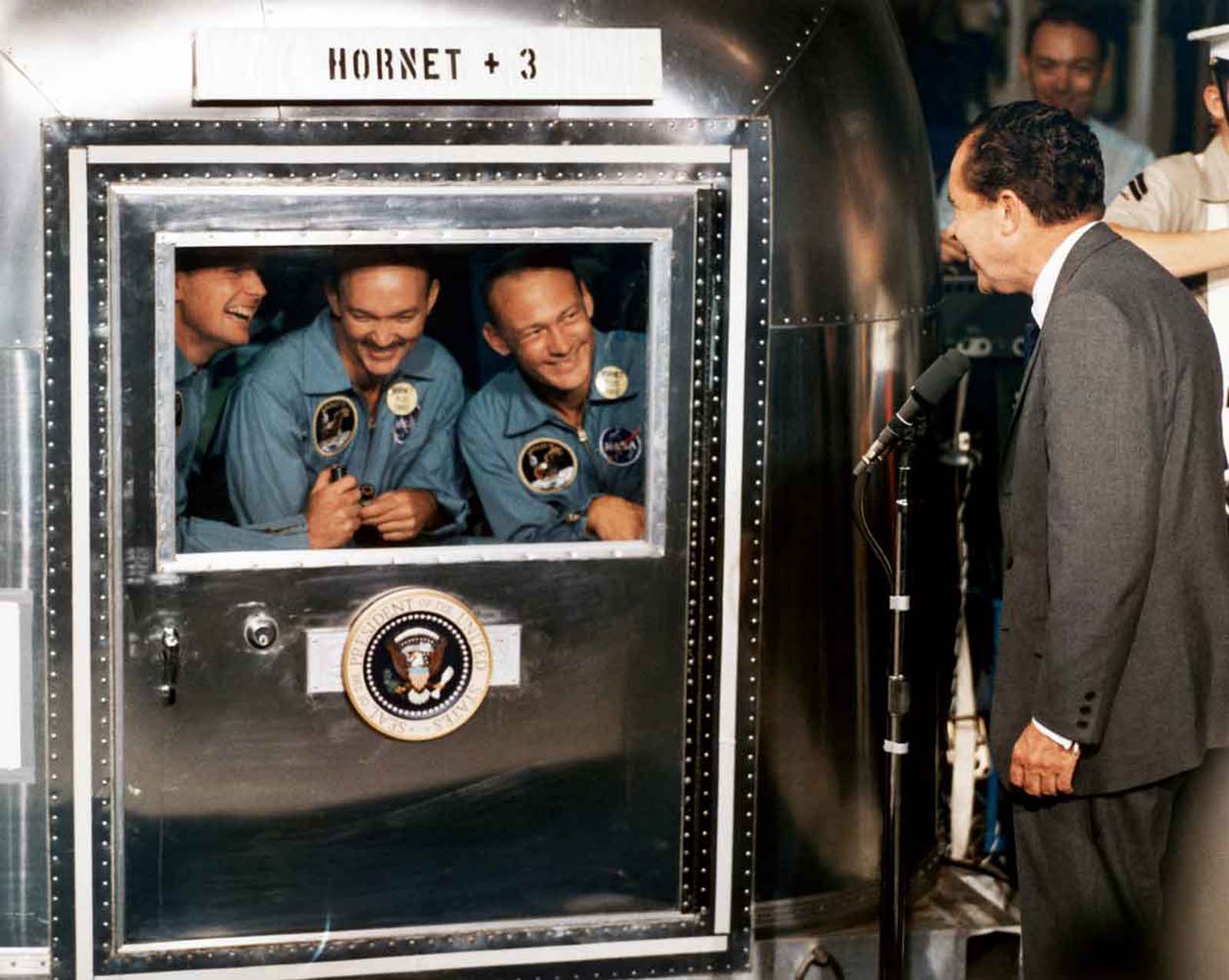 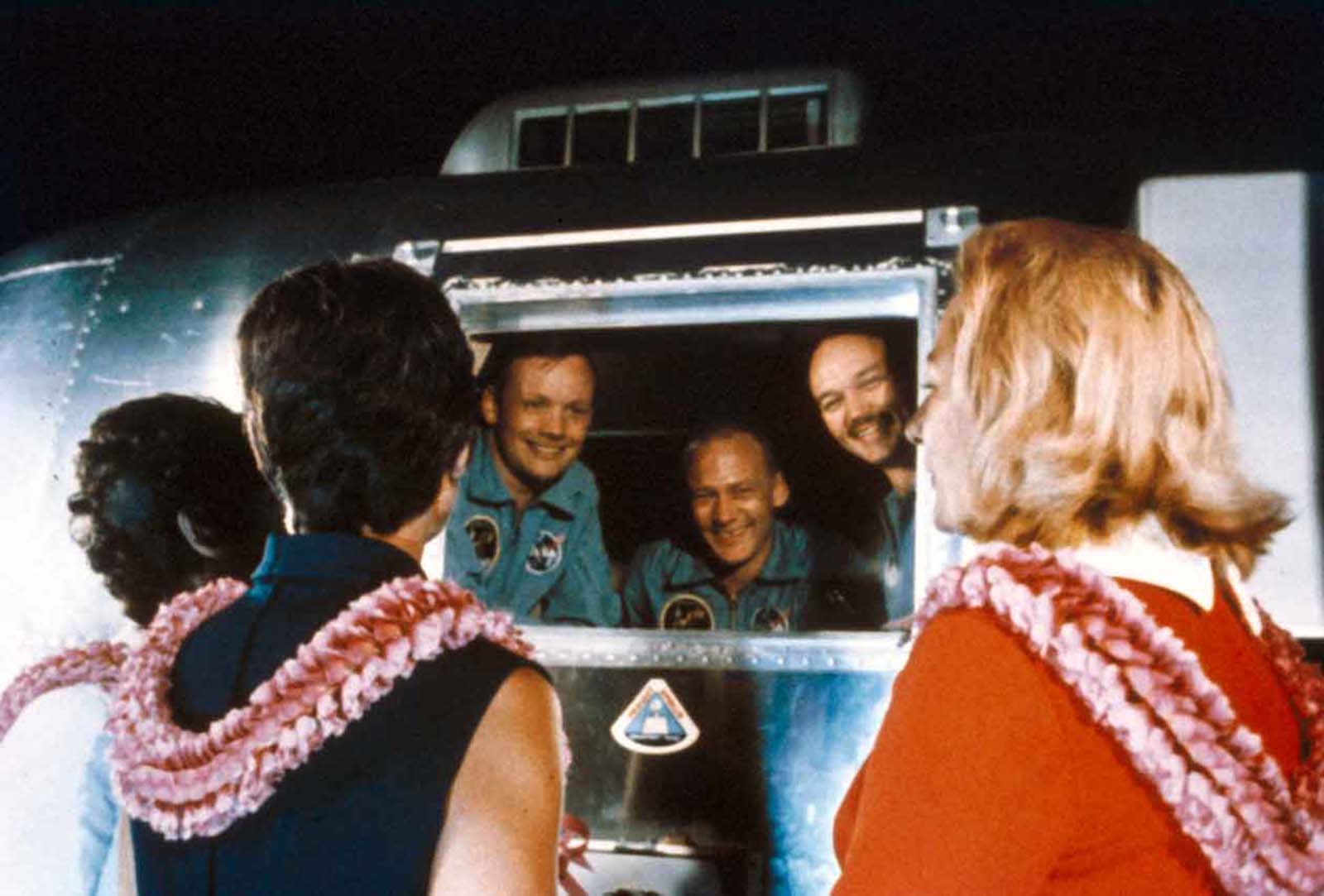 Astronauts Neil Armstrong, Edwin Buzz Aldrin and Michael Collins are greeted by their wives aboard the USS Hornet. The astronauts are in a Mobile Quarantine Facility. Apollo 11, the first manned lunar landing mission, was launched on 16th July 1969 and Neil Armstrong and Aldrin became the first and second men to walk on the Moon on 20th July 1969. Command Module pilot Michael Collins remained in lunar orbit while Armstrong and Aldrin were on the surface. The astronauts returned to Earth on 24th July 1969. 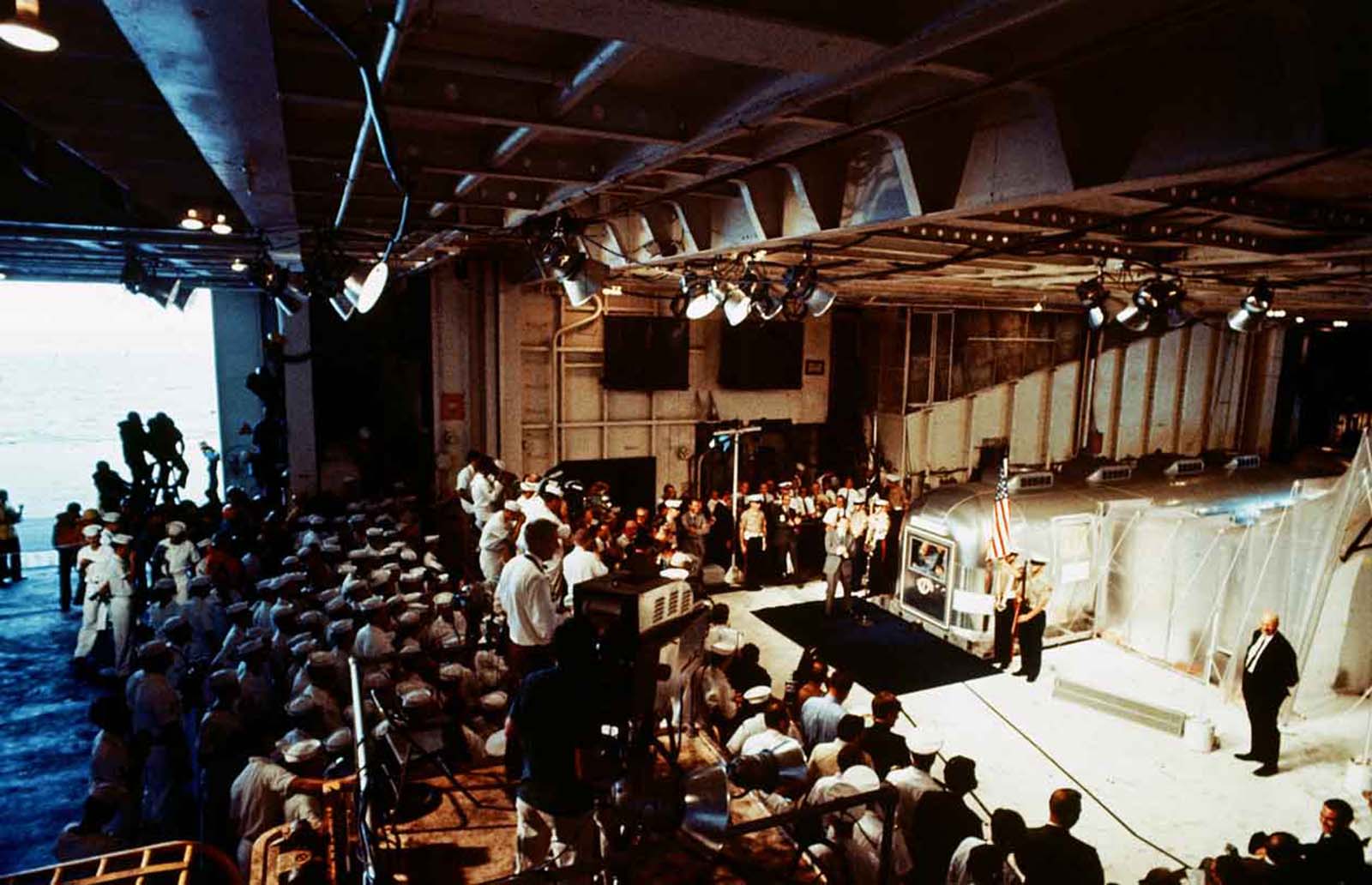 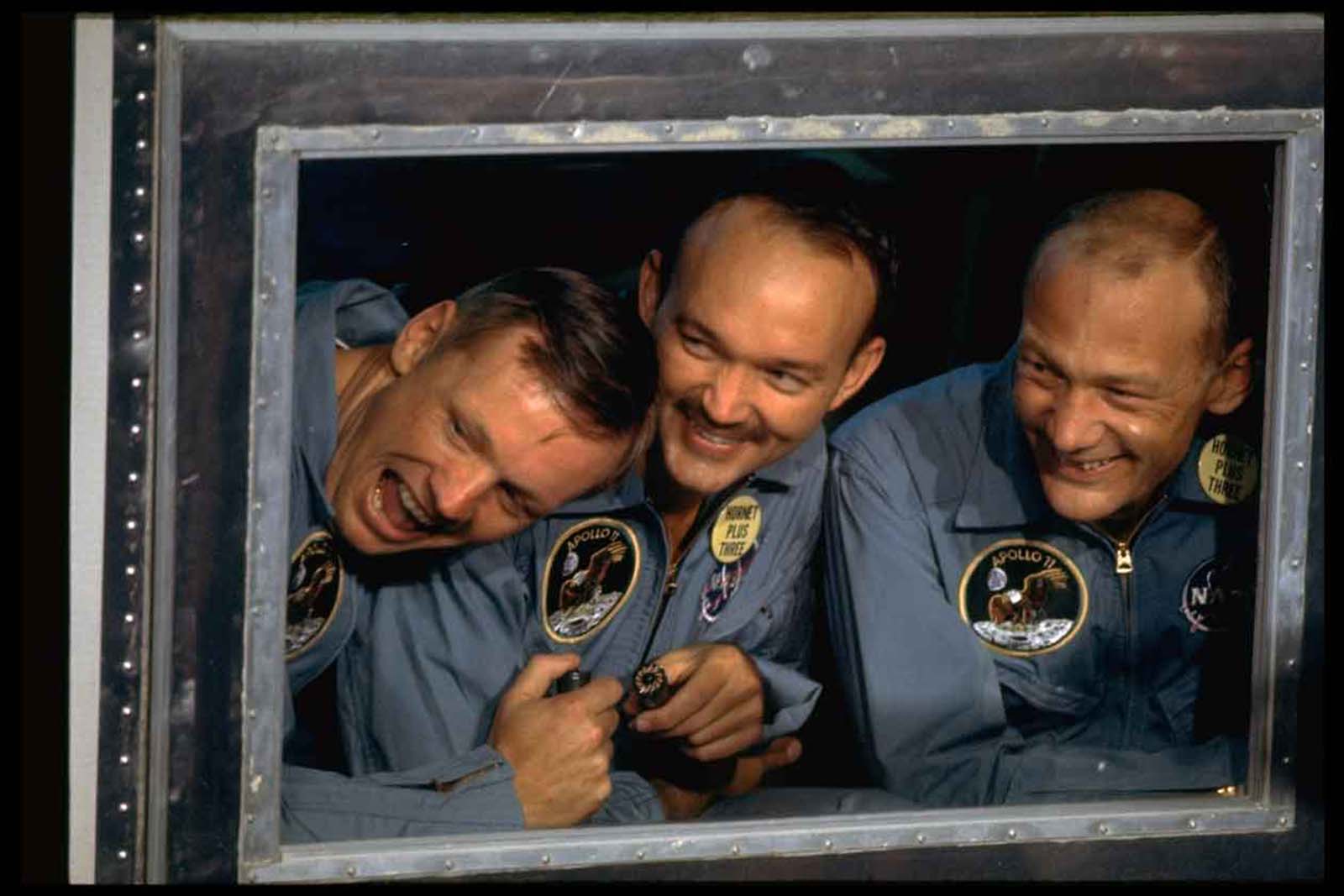