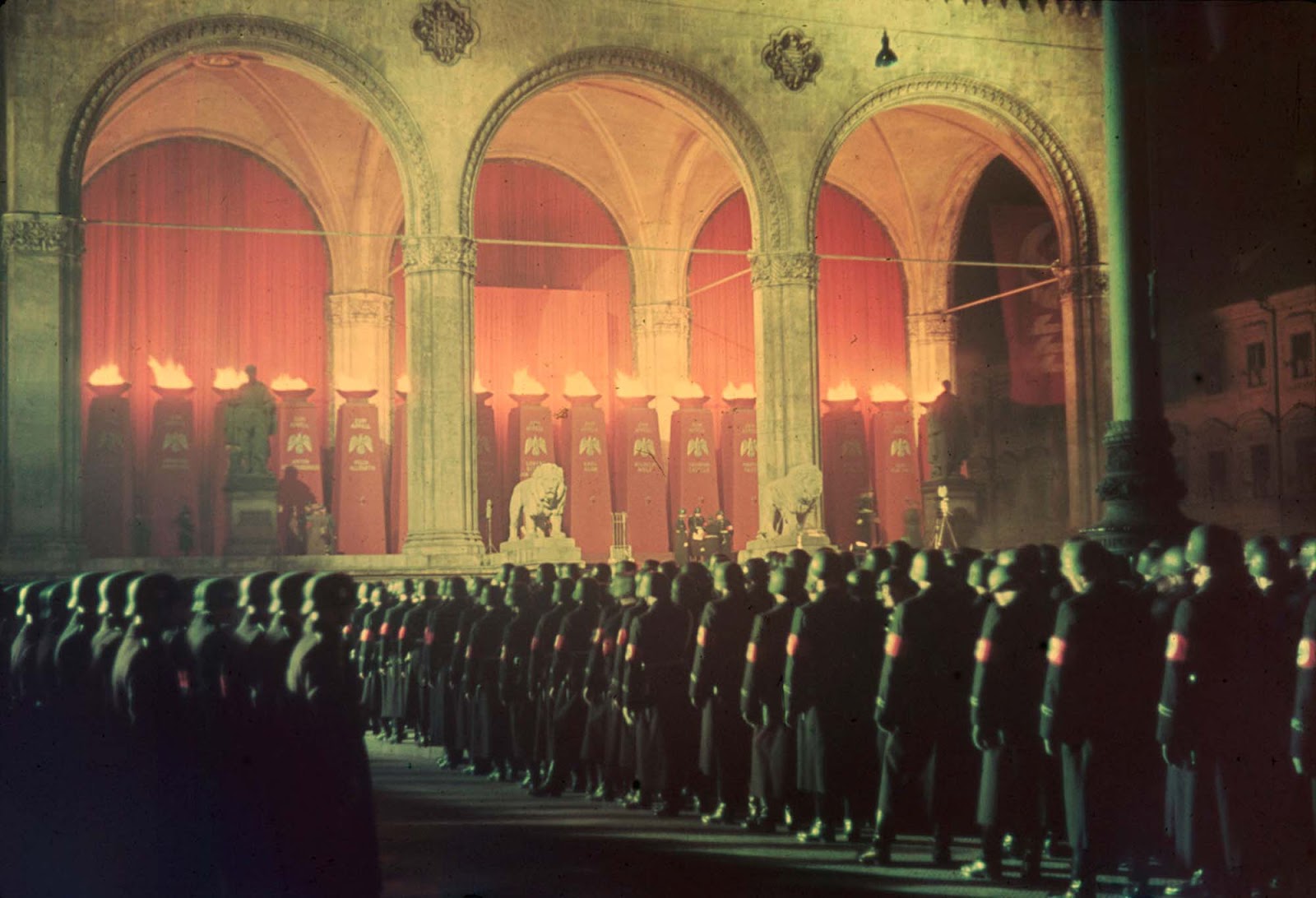 The SS loyalty oath was as follows: “I vow to you, Adolf Hitler, as Führer and chancellor of the German Reich, loyalty and bravery. I vow to you and to the leaders that you set for me, absolute allegiance until death. So help me God”.

The SS was different from the Wehrmacht (regular army) in several respects. Perhaps the most obvious was its fanatical loyalty to Hitler and to Nazi racial and political values. SS officers and soldiers swore an oath of loyalty to Hitler, promising “absolute allegiance”; the SS motto was Meine Ehre Heisst Treue (My honor is Loyalty). This the blood oath engraved on their dress daggers and on their uniform belt buckles.

Another distinguishing feature of the SS was its racial composition. Himmler imagined the SS not only as an elite military force but also the embodiment of racial purity. He ordered that all recruits be subject to strict physical requirements and “genealogical investigation” before acceptance. For instance, enlistees in the Leibstandarte (Life Guard), Hitler’s own personal bodyguard regiment, had to be between 23 and 35 years of age, 5’11″ (180 cm) in height, of Deutsche Blut (German blood) and with no history of criminal behavior or alcoholism. The racial requirements for SS officers was even more stringent. During the 1930s officer candidates had to provide certified evidence of Aryan heritage, dating back to 1750s. 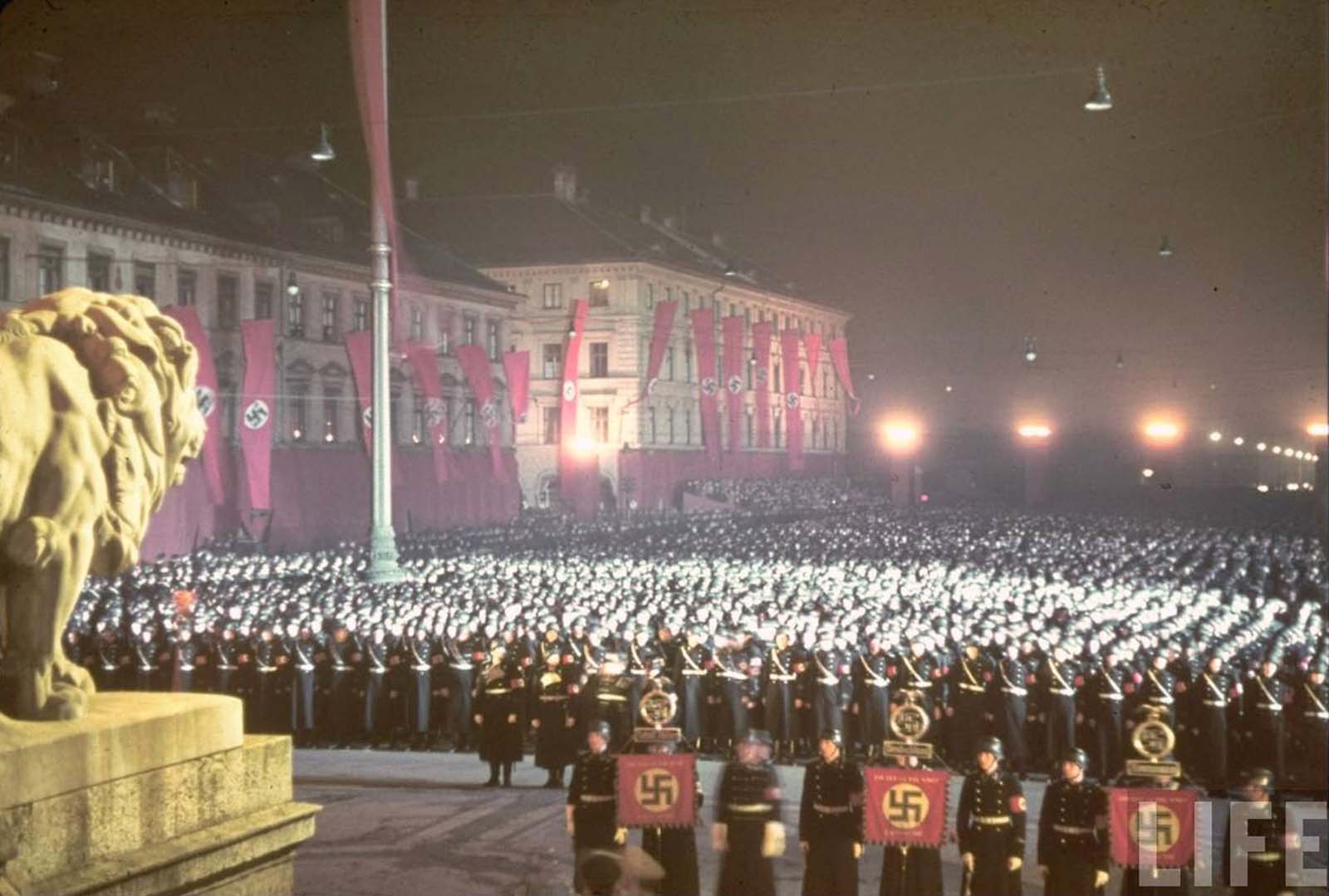 The SS motto was “Our honor is Loyalty”.

The structure in the picture is the famous Feldherrnhalle (Field Marshals’ Hall), a monumental loggia on the Odeonsplatz in Munich. Modeled after the Loggia dei Lanzi in Florence, it was commissioned in 1841 by King Ludwig I of Bavaria to honor the tradition of his army. The Feldherrnhalle was the scene of a confrontation on Friday morning, 9 November 1923, between the Bavarian State Police and the followers of Adolf Hitler in which the Nazi party attempted to storm the Bavarian Defense Ministry. This was the culmination of the Nazis’ failed coup attempt to take over the Bavarian State, commonly referred to as the Beer Hall Putsch. In the ensuing gun battle, four policemen and sixteen marchers were killed. Many more were wounded, including Hermann Göring. One of the Nazi swastika banners was drenched with blood, and this flag would later become the famous Blutfahne (Blood Banner) of the Nazi movement.

After the Nazis took power in 1933, Hitler turned the Feldherrnhalle into a memorial to the Nazis killed during the failed putsch. A memorial to the fallen SA men was put up on its east side, opposite the location of the shootings. This monument, called the Mahnmal der Bewegung, was created to a design by Paul Ludwig Troost. It was a rectangular structure listing the names of the martyrs. This was under perpetual ceremonial guard by the SS. The Odeonsplatz in front of the Feldherrnhalle served as a parade field for the SS, who often staged nighttime rallies there. New SS recruits took their oath of loyalty to Hitler during these formations. Passers-by were expected to hail the site with the Nazi salute.