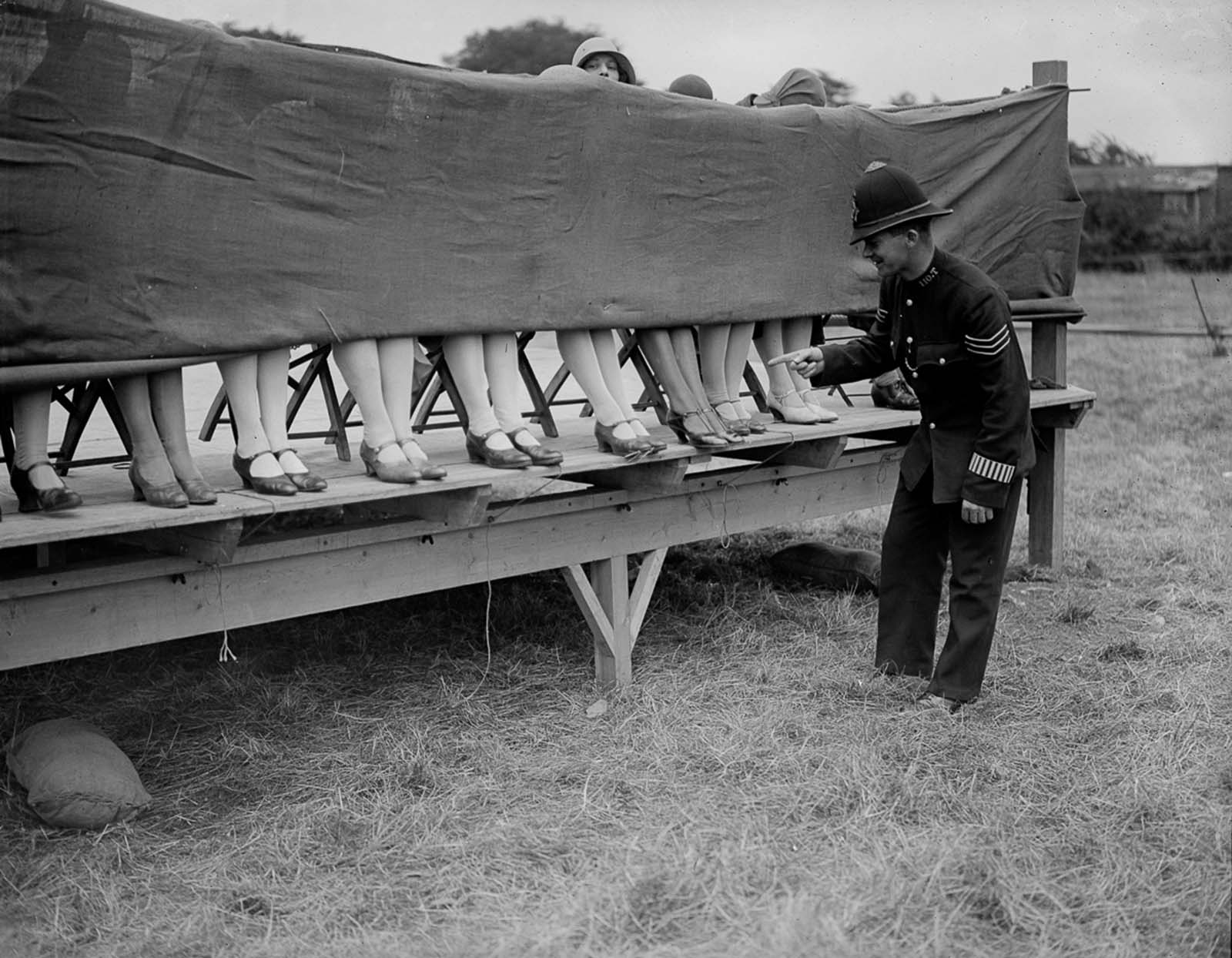 A policeman judges an ankle competition at Hounslow, London. 1930.

The pretty ankle contest” appear in the early 1900s as special shows within women’s beauty competitions. Contestants would have to stand behind a curtain to conceal their bodies, so that all that could be seen was below the knee – legs clad in thick stockings and shoes on their feet.

The concealment was to encourage reluctant women to participate in the contest. One newspaper advised in 1927: “Older ladies need not feel timid about entering the contest. They have as much chance as their daughters.”

The judge, often a policeman or a clerk, would walk up and down and judge the prettiest ankles – such as seen in the pictures collected in this article. Some pageants also judged prettiest shoulders, arms and legs.

These shows often served as promotions for hosiery companies, with winners receiving free stockings from the event sponsors, not to mention fame and the crown of the prettiest ankle.

Ankles were seen as desirable as far back as the 18th century, with one lonely heart advertised in the 1770s stating “shapely ankle preferred” – a rather shocking request for that era. However they didn’t quite come into vogue as fashionably “provocative” and a source of titillation until women’s hemlines began to rise in the early 20th century.

After the Second World War, with much more on view – take the swinging hemlines of the 1960s – ankle-judging competitions largely fell out of fashion. But the obsession with the segmentation of women’s bodies lives on. 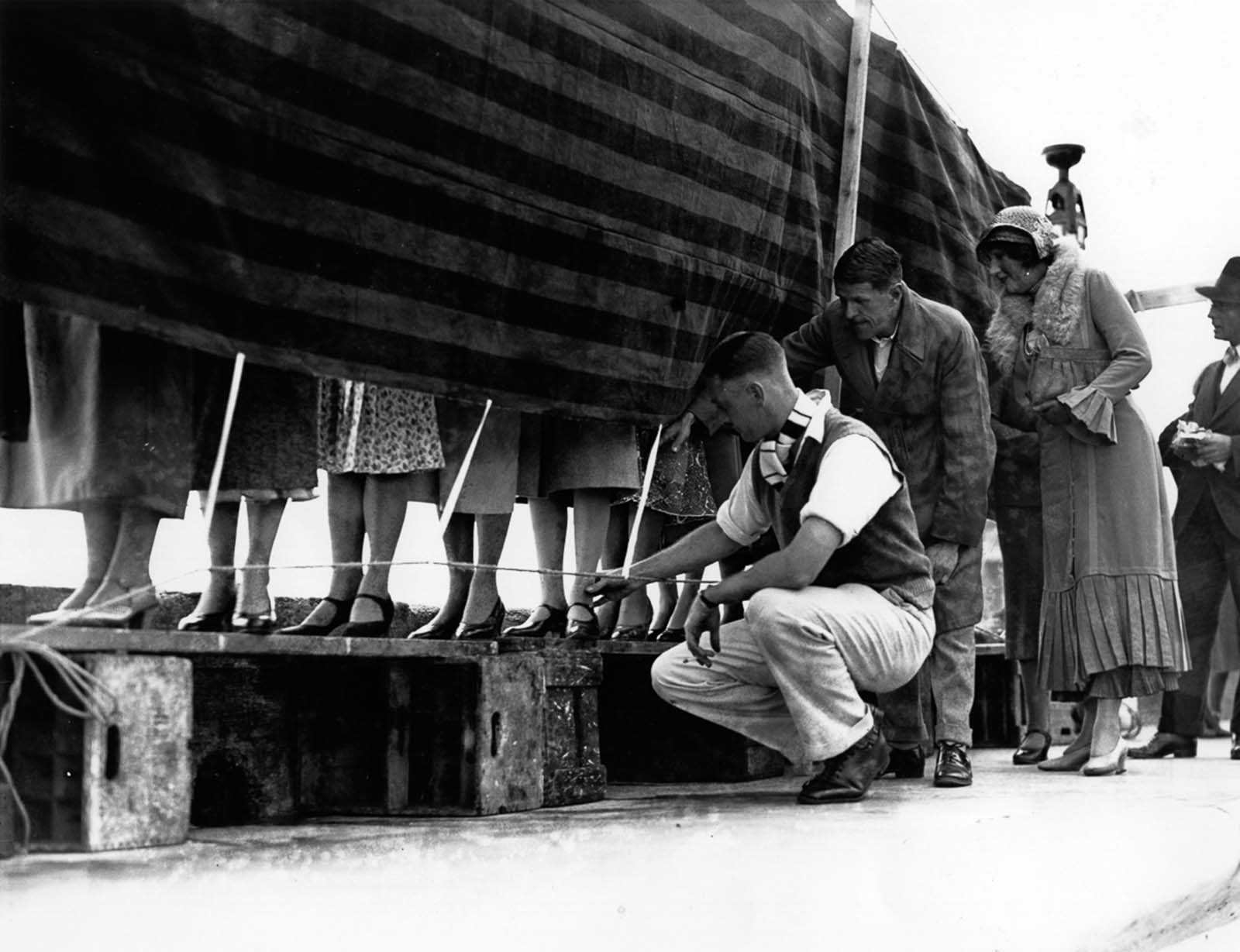 Men judge women’s ankles at a competition in Kent, England. 1932. 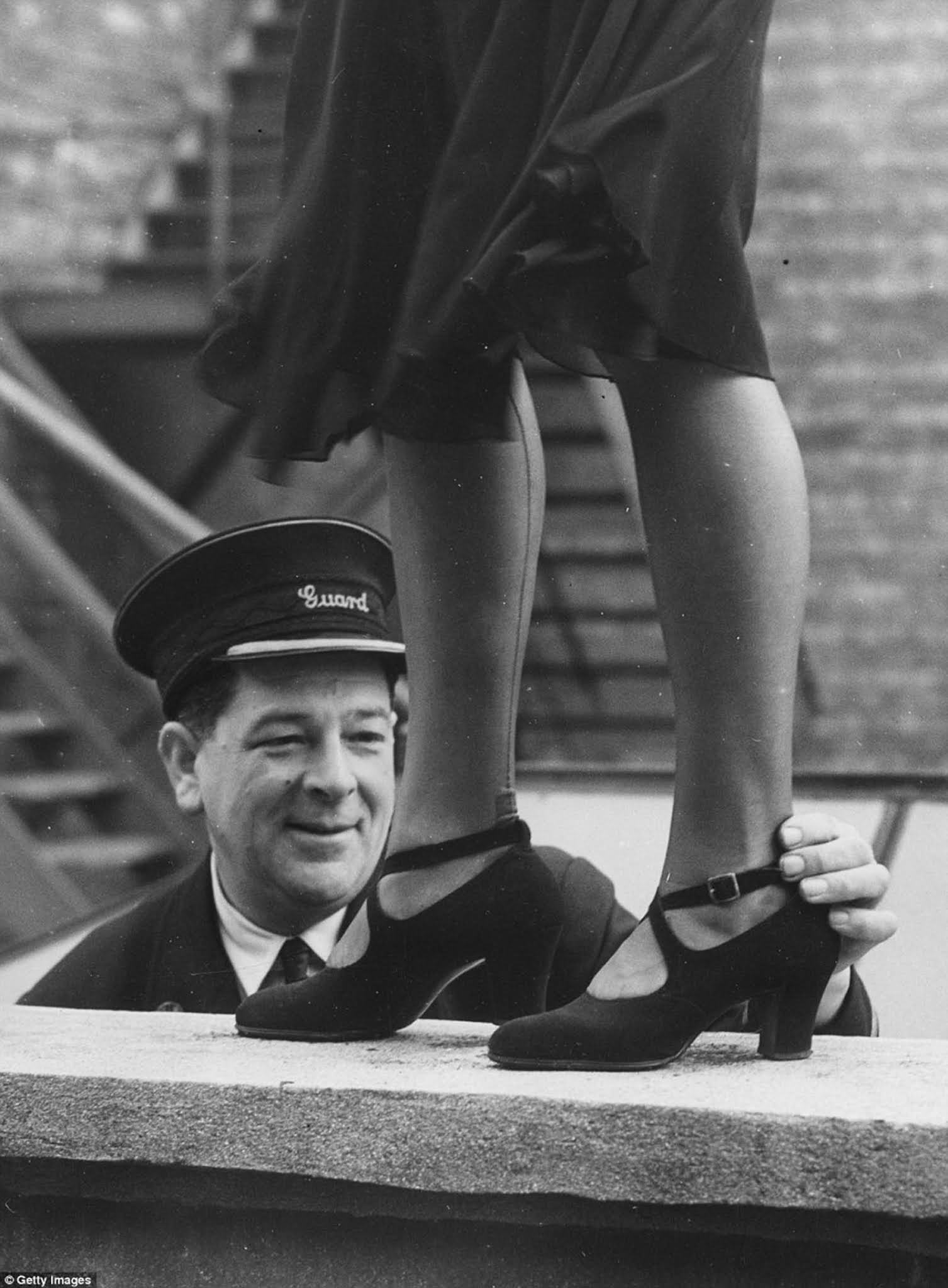 Railway guard George Wiltshire, judge of an ankle competition organized by the Women’s Section of the British Railways Social Club at Oxford, with the winner, Elsie Chapman, in 1949. 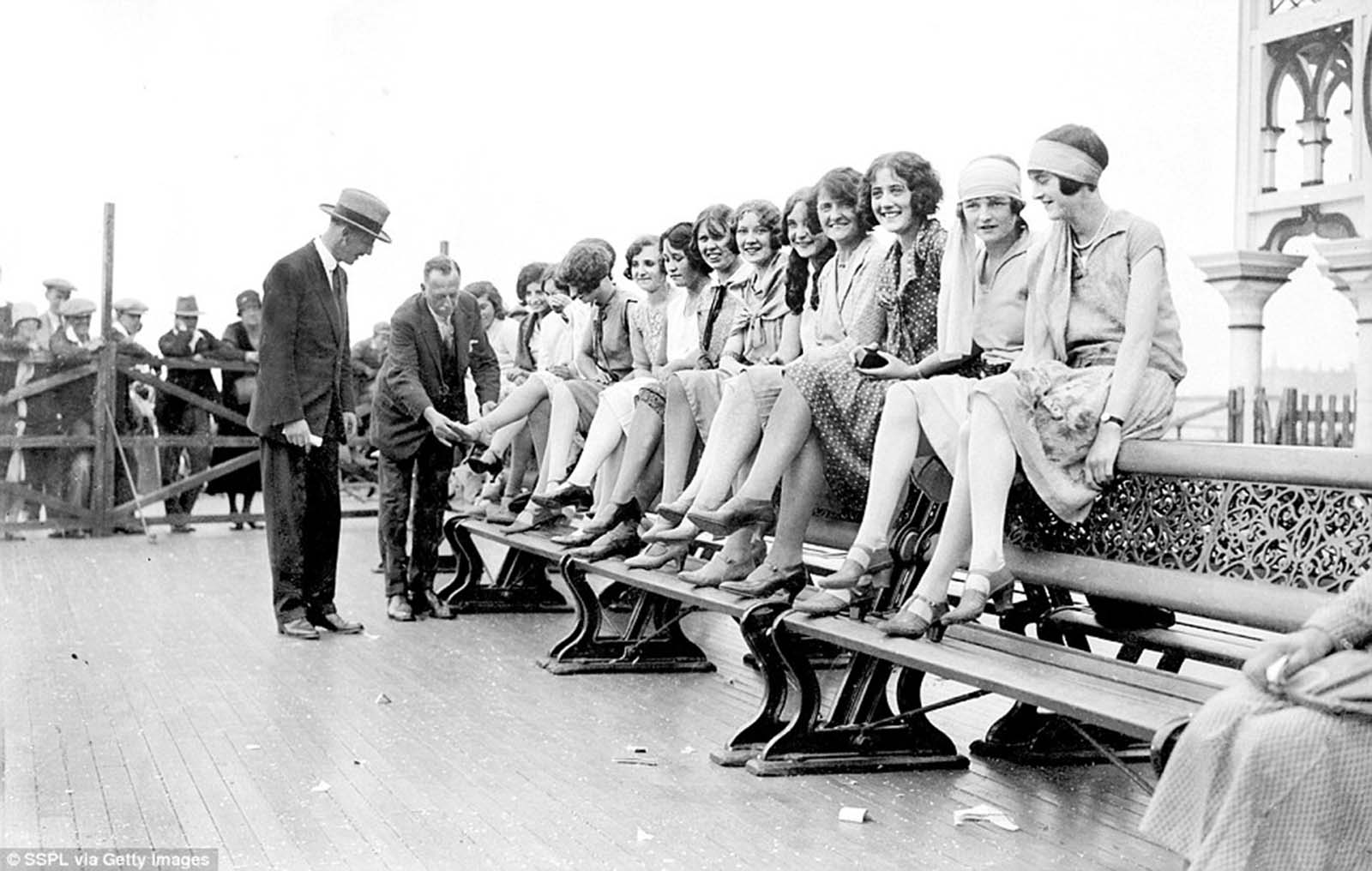 Judges judging ankles in the most beautiful ankles competition held on Palace Pier in connection with the Brighton carnival celebrations. 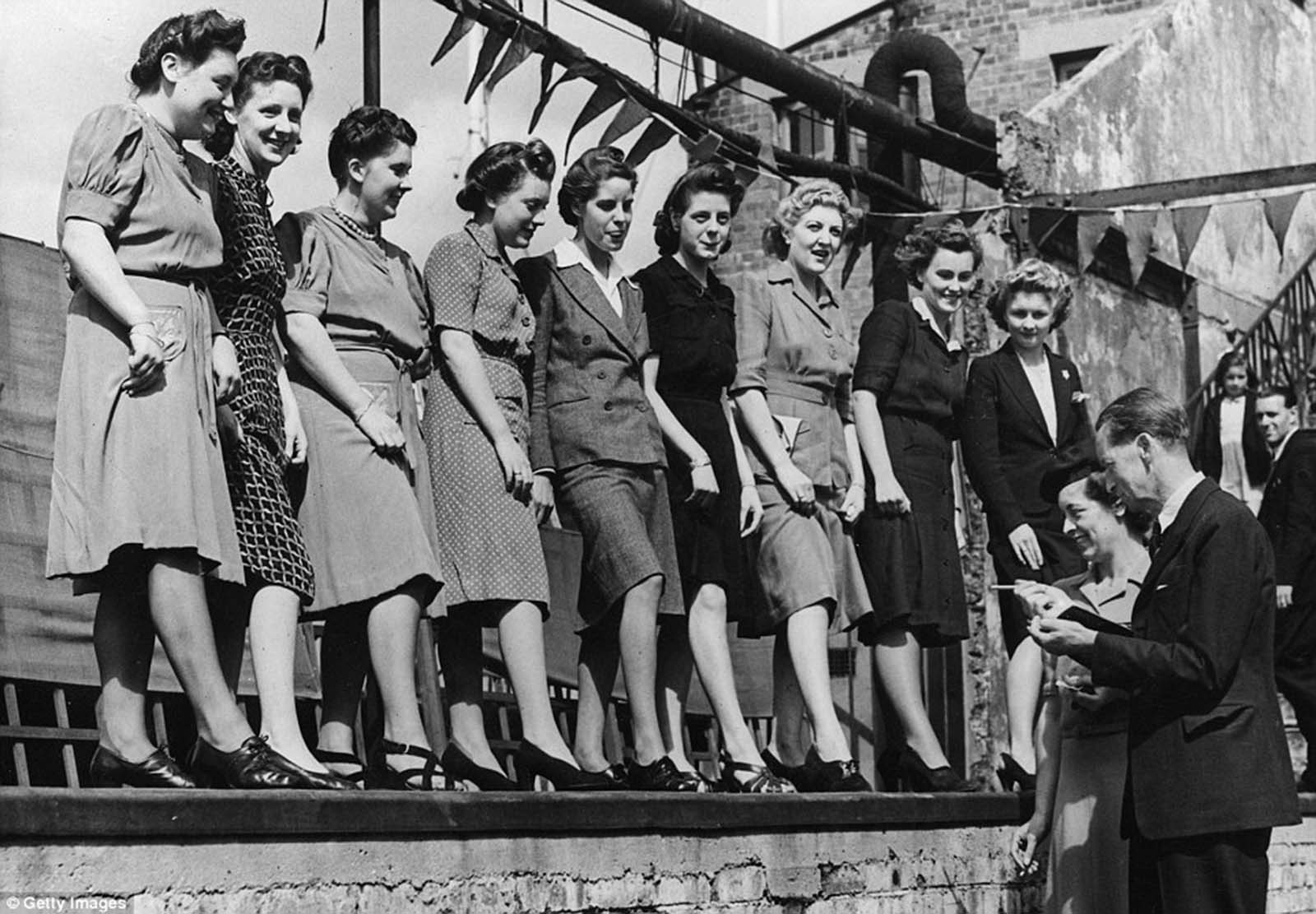 The ankle judging competition at Selfridges department store’s annual sports meeting on the roof of the shop’s building in London’s Oxford Street in 1943. 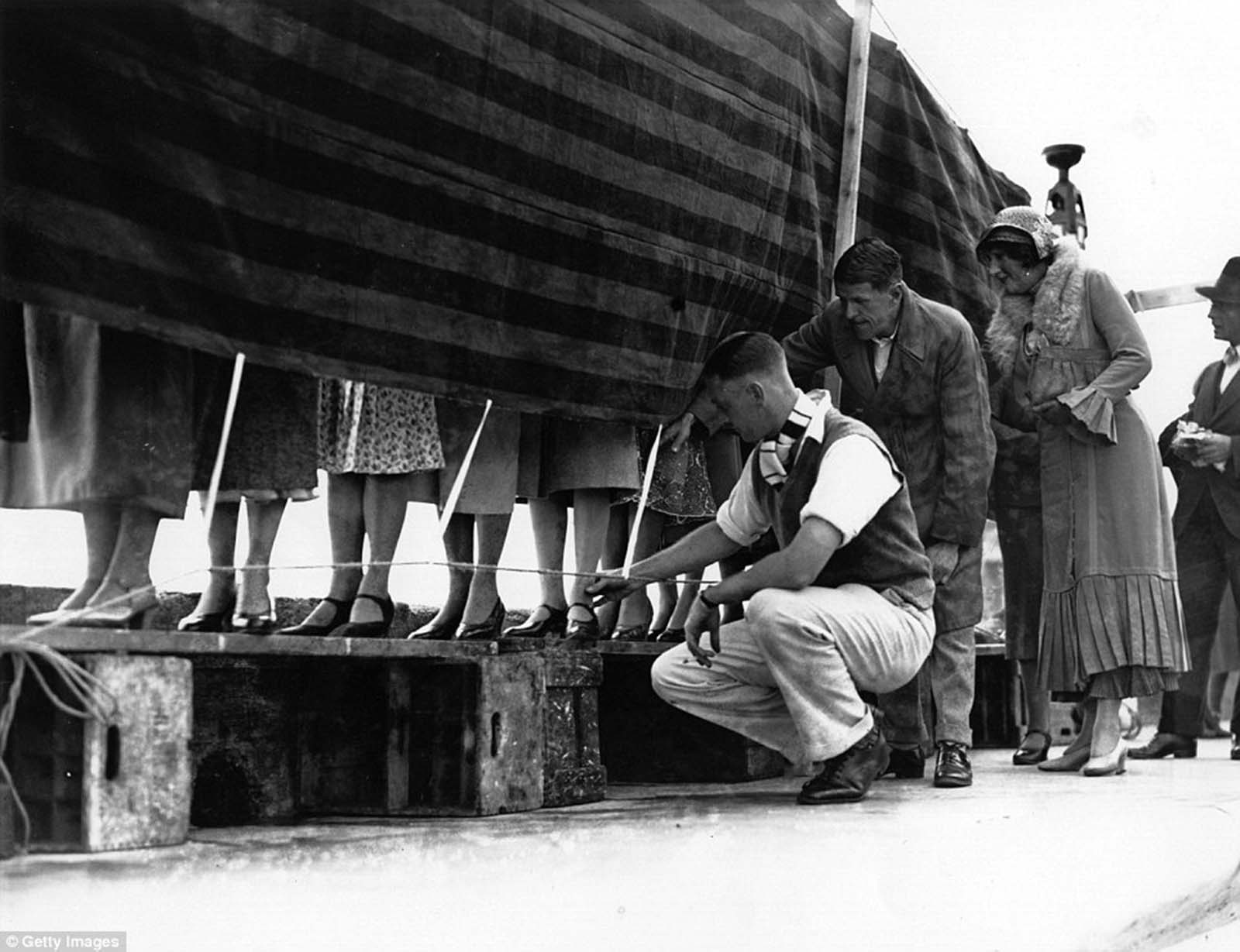 A line up of women’s ankles (the rest of their bodies being behind a sheet) is judged by two men and a woman while a third man looks on, at Cliftonville in Kent in 1932. 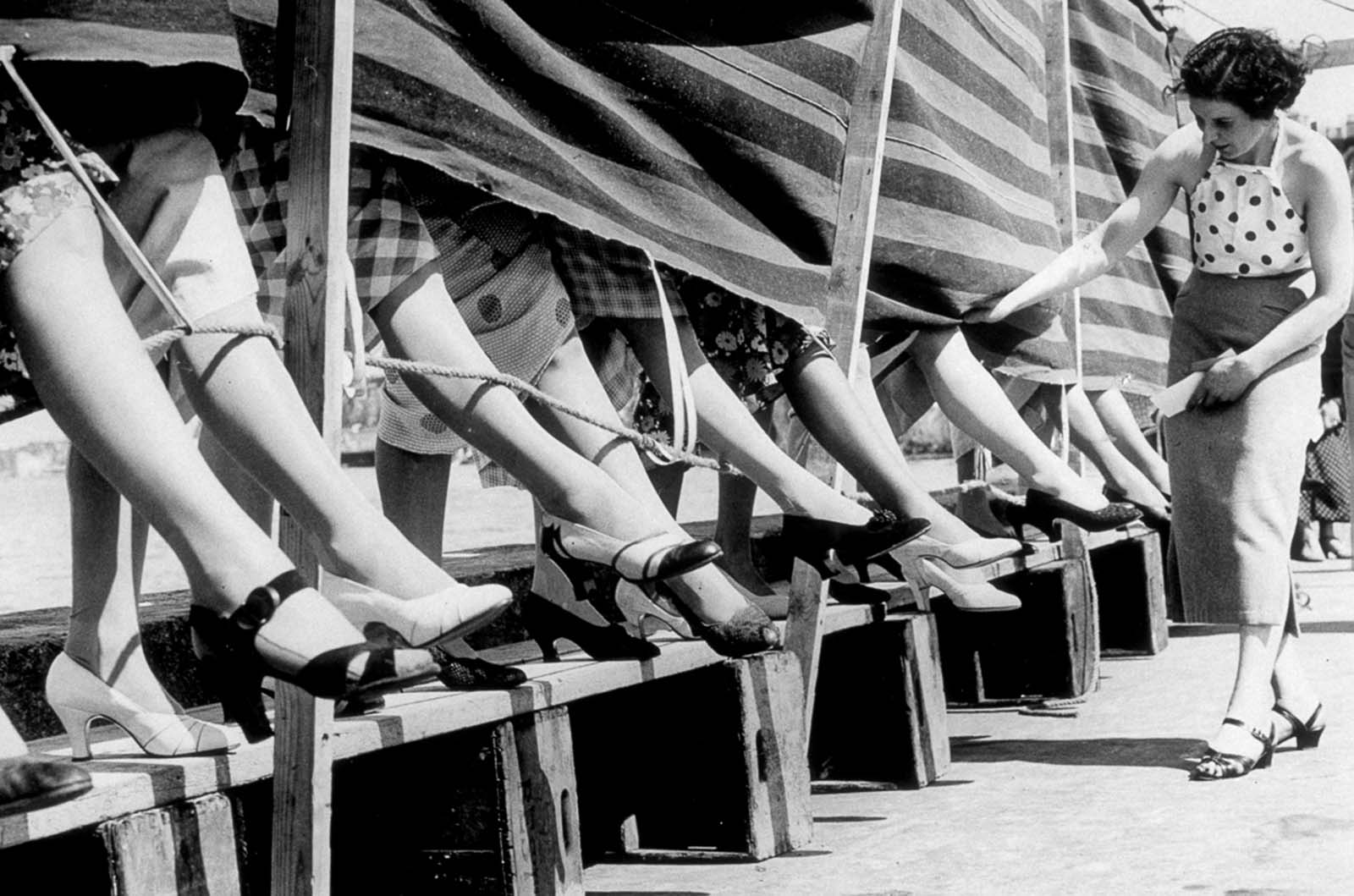 A woman judges the best ankle competition at the Cliftonville open air swimming pool, Margate, in 1936. 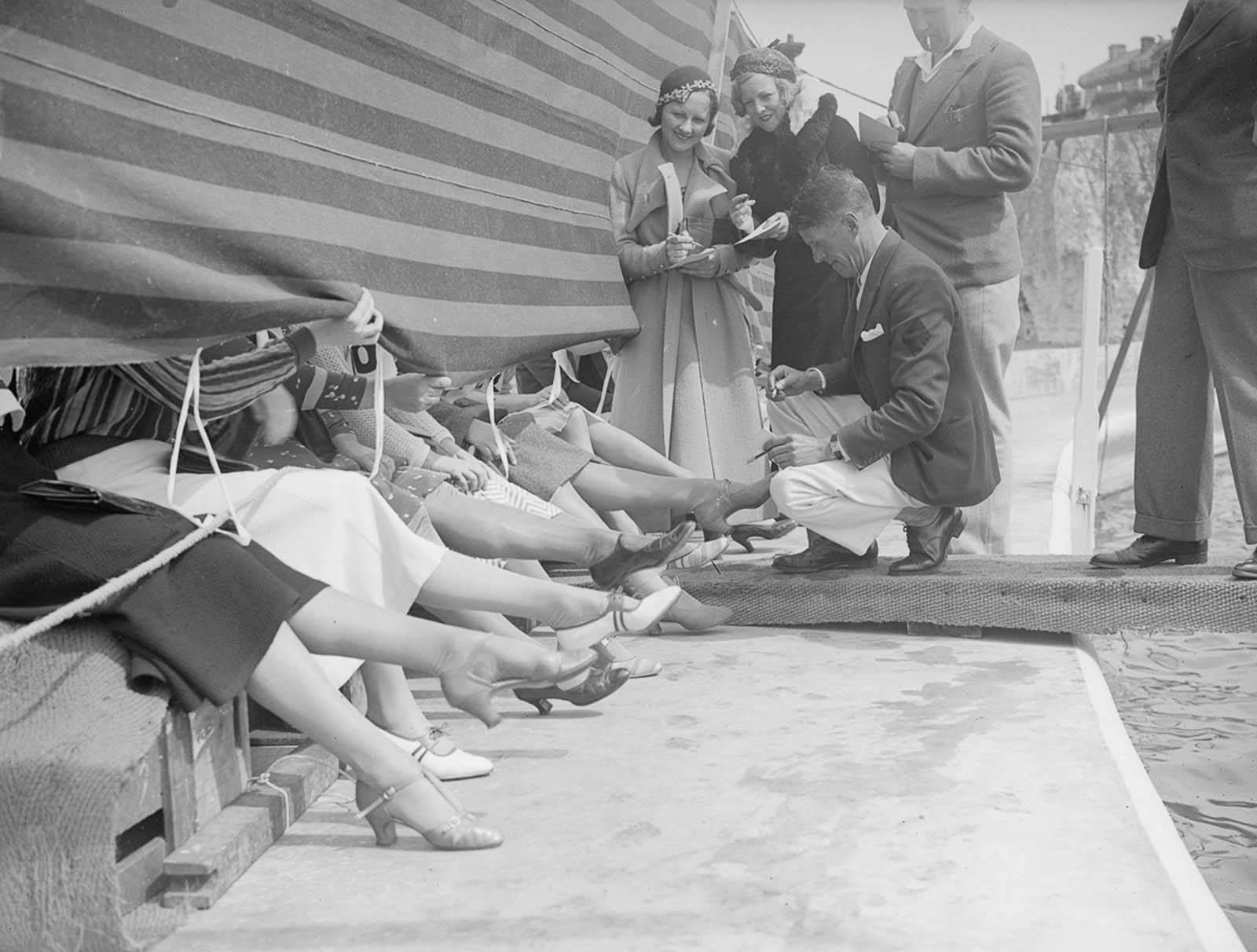 Judges and competitors at a ‘prettiest ankle’ contest, Cliftonville, Kent in 1933. 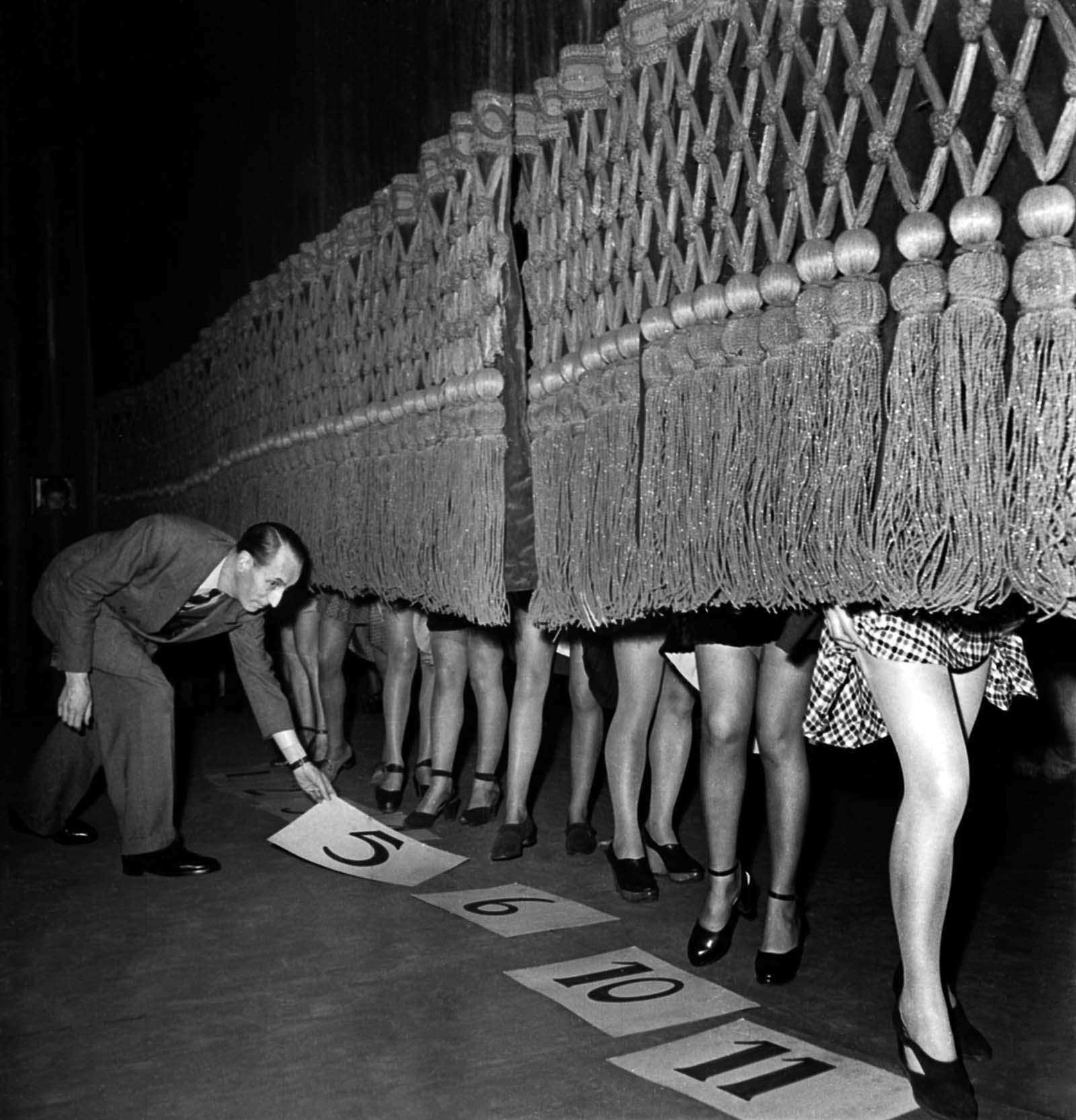 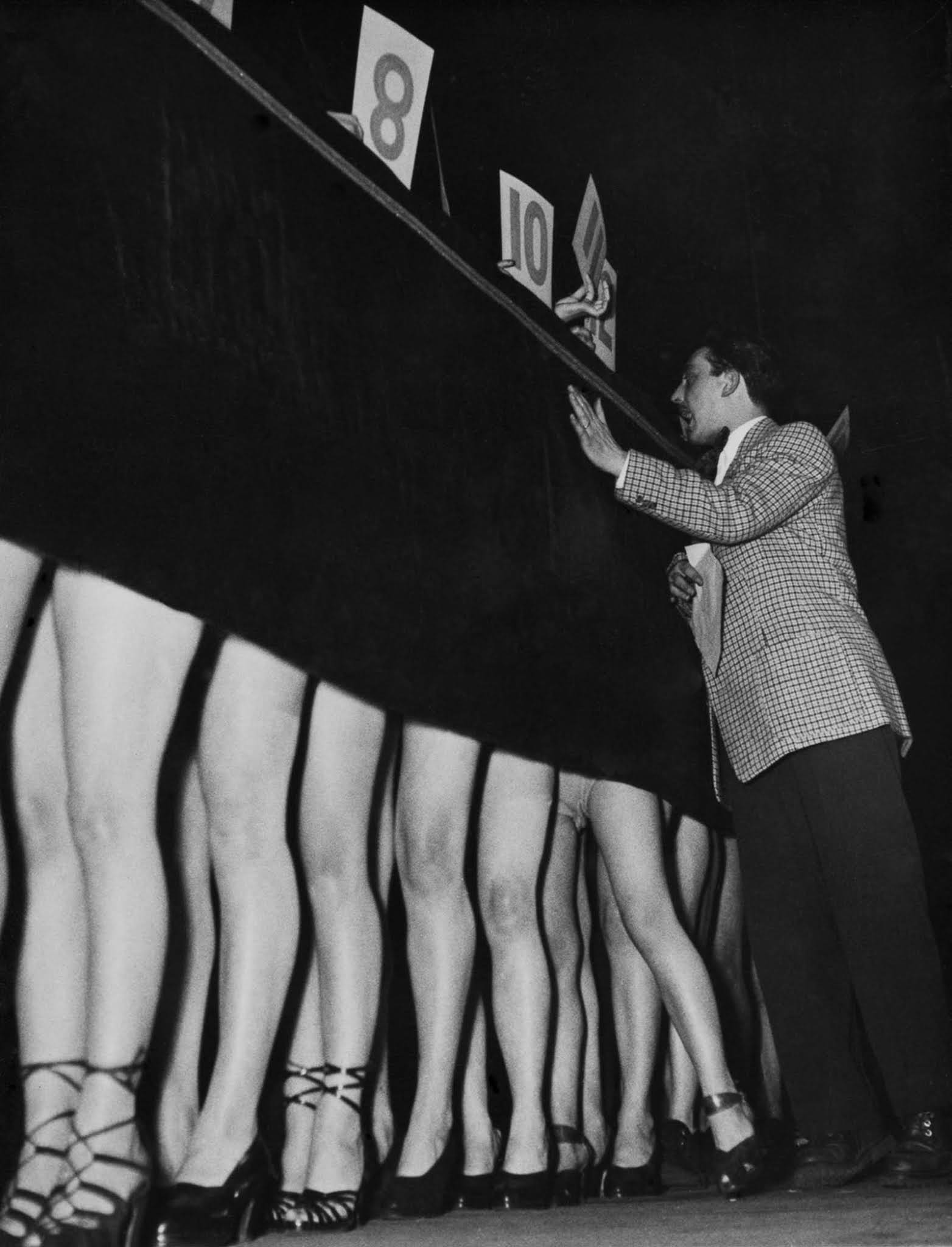 It wasn’t just England: Max Japy presenting the “Most Beautiful Legs Of Paris Contest In Paris” in January 1950. 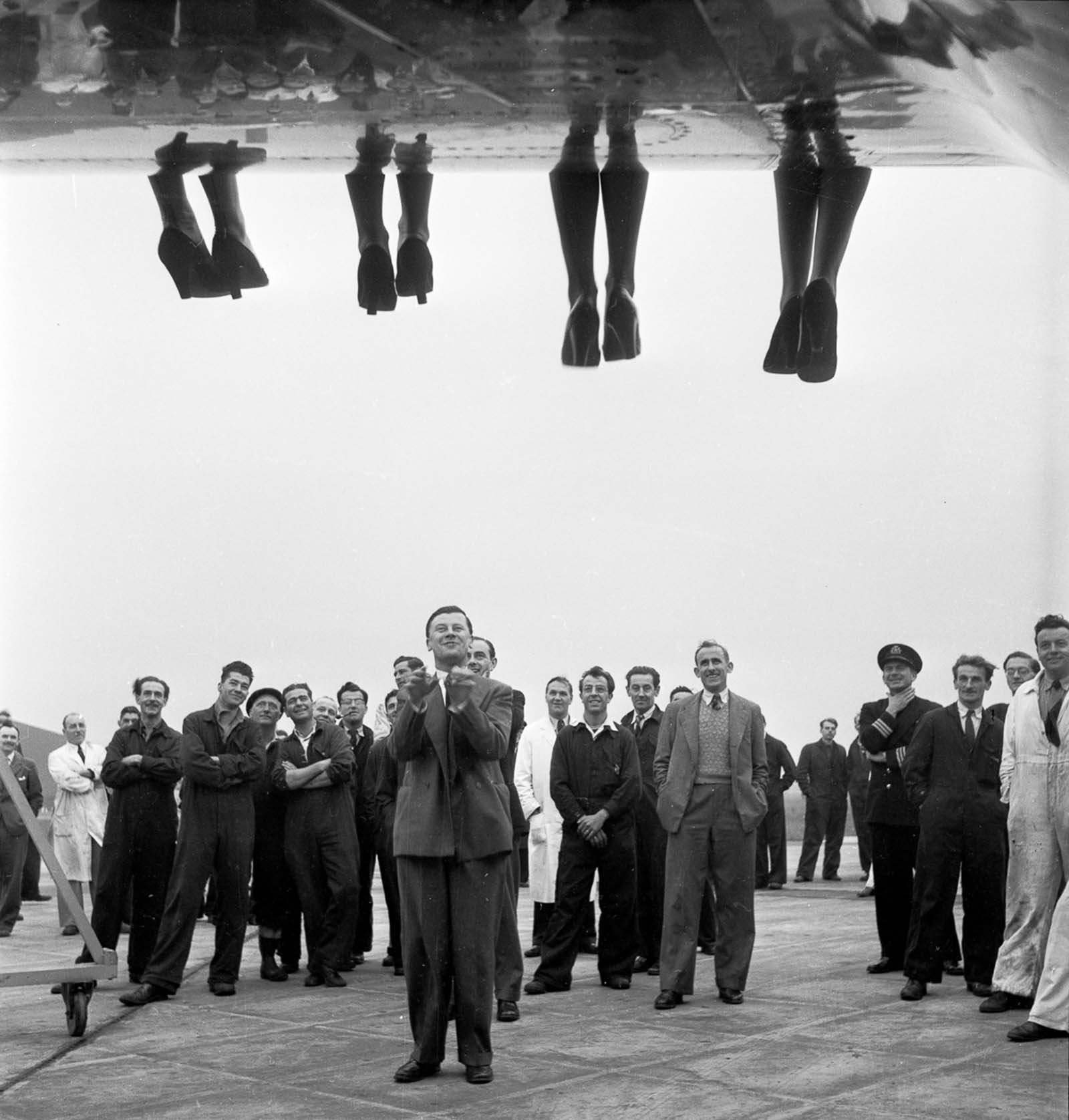 The legs of contestants in a ‘Miss World’ beauty competition dangle over the wing of a BOAC Comet airplane. 1953.