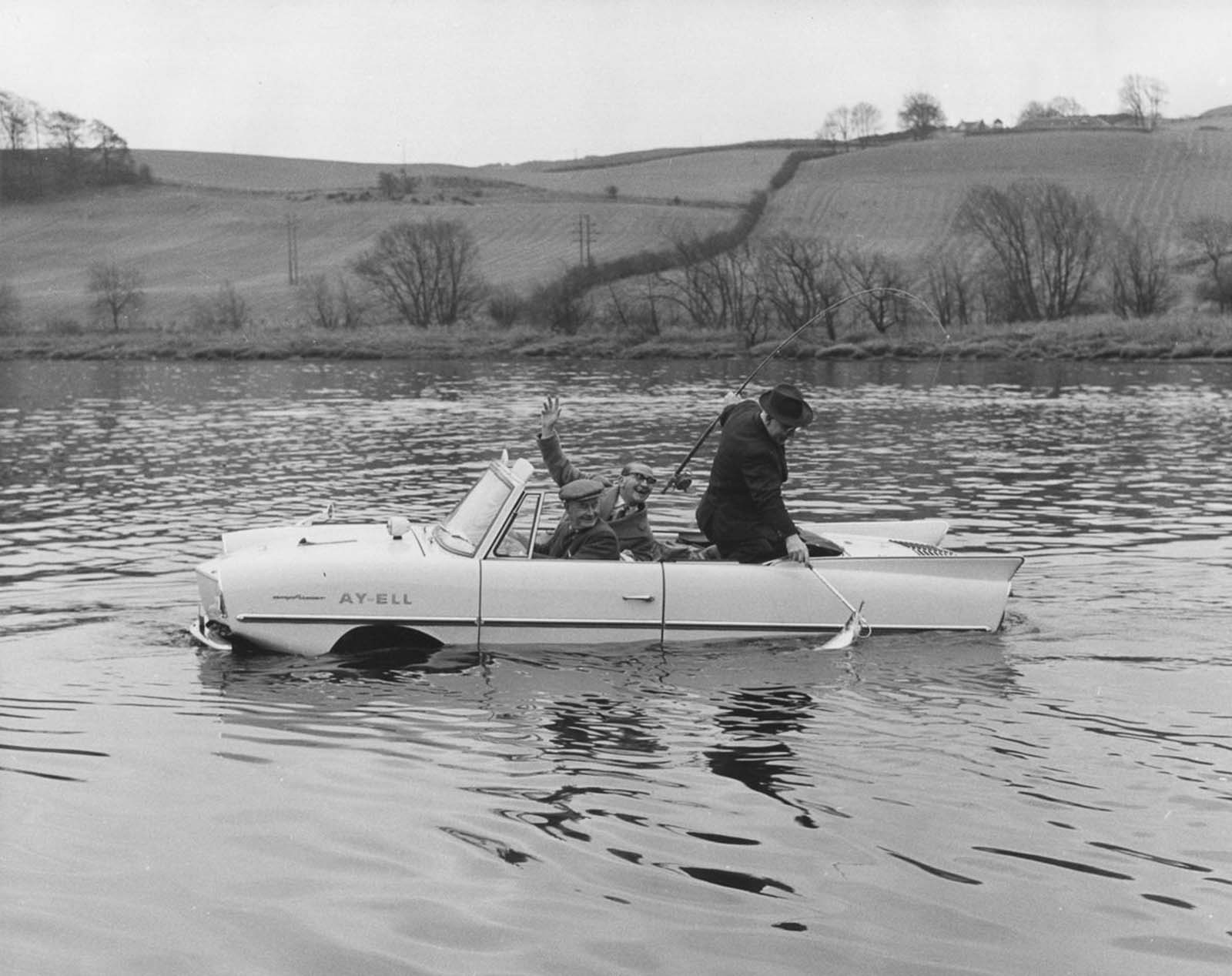 The Amphicar is used as a fishing boat by its owner at the start of the salmon fishing season on the River Tay, Scotland. 1964.

The Amphicar was manufactured in West Germany and first made an appearance in America at the 1961 New York Auto Show. Originally designed by Hanns Trippel, these amphibious cars hit the US market from 1961 to 1967. Most notable for their ability to cruise on land and operate in the water, these cars were a fun new invention in the car world for that time.

The Amphicar’s engine was mounted at the rear of the craft, driving the rear wheels through a 4-speed manual transmission. For use in the water, the same engine drove a pair of reversible propellers at the rear, with a second gear lever engaging forward or reverse drive.

Once in the water, the main gear lever would normally be left in neutral. By engaging first gear as well as driving the propellers when approaching a boat ramp, the Amphicar could drive itself out of the water.

The doors locked shut for water travel. On land the Amphicar’s listed top speed was 90 mph, but road testers could only get it to about 65 mph. It was deemed better in the water, reaching a speed of 10 mph.

Although the car looks small, it weighed in around 2,300 pounds. The cars were so heavy because they had to be rigid and waterproof in order to take on land and water. 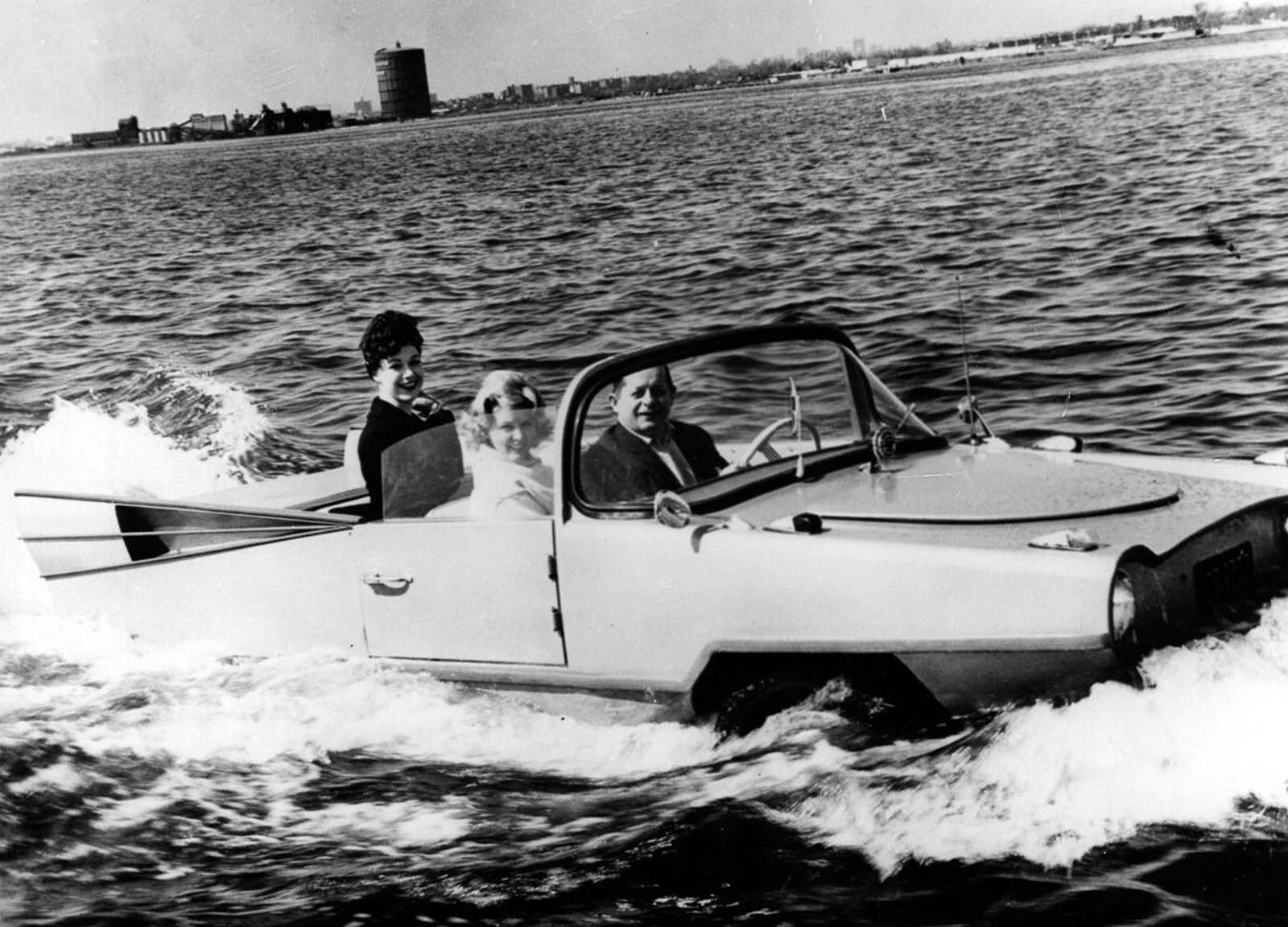 The Amphicar is demonstrated at the International Motor Show on Long Island. 1960.

One of the most famous owners of the Aphicar was President Lyndon Johnson. Those leisurely rides created the opportunity for a clever prank that Johnson enjoyed playing on his passengers.

It involved barrelling the vehicle down a hill into a lake and exclaiming to his passengers that the brakes had malfunctioned, while they had no idea the car was designed to float in water.

Joseph A. Califano, Jr., the president’s special assistant for domestic affairs at the time, recalled his experience as a victim of his boss’s prank: The President, with [White House secretary] Vicky McCammon in the seat alongside him and me in the back, was now driving around in a small blue car with the top down. We reached a steep incline at the edge of the lake and the car started rolling rapidly toward the water.

As we putted along the lake then (and throughout the evening), he teased me. “Vicky, did you see what Joe did? He didn’t give a damn about his President. He just wanted to save his own skin and get out of the car.” Then he’d roar. 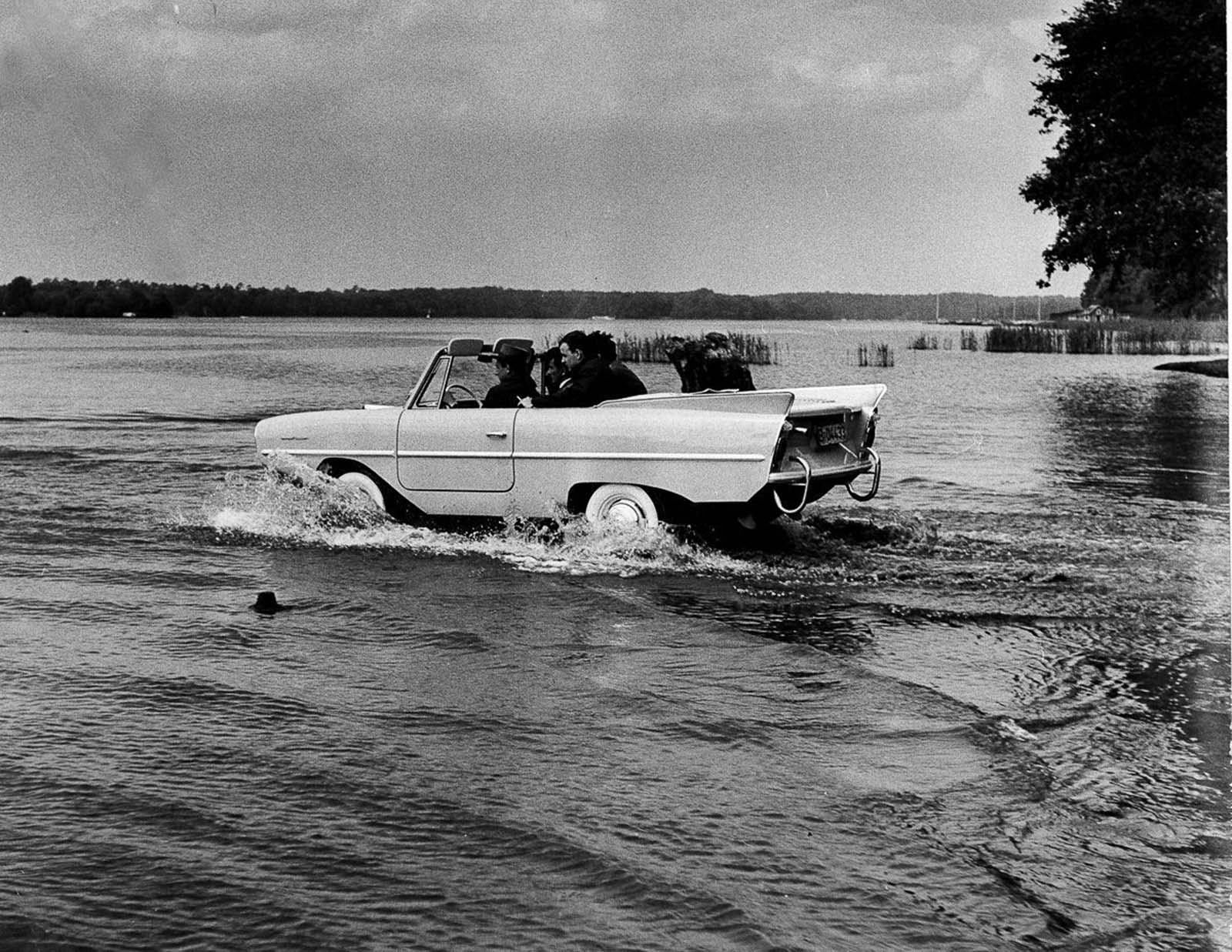 Designed by Hans Trippel, the amphibious vehicle was manufactured by the Quandt Group at Lübeck and at Berlin-Borsigwalde, with a total of 3,878 manufactured in a single generation. 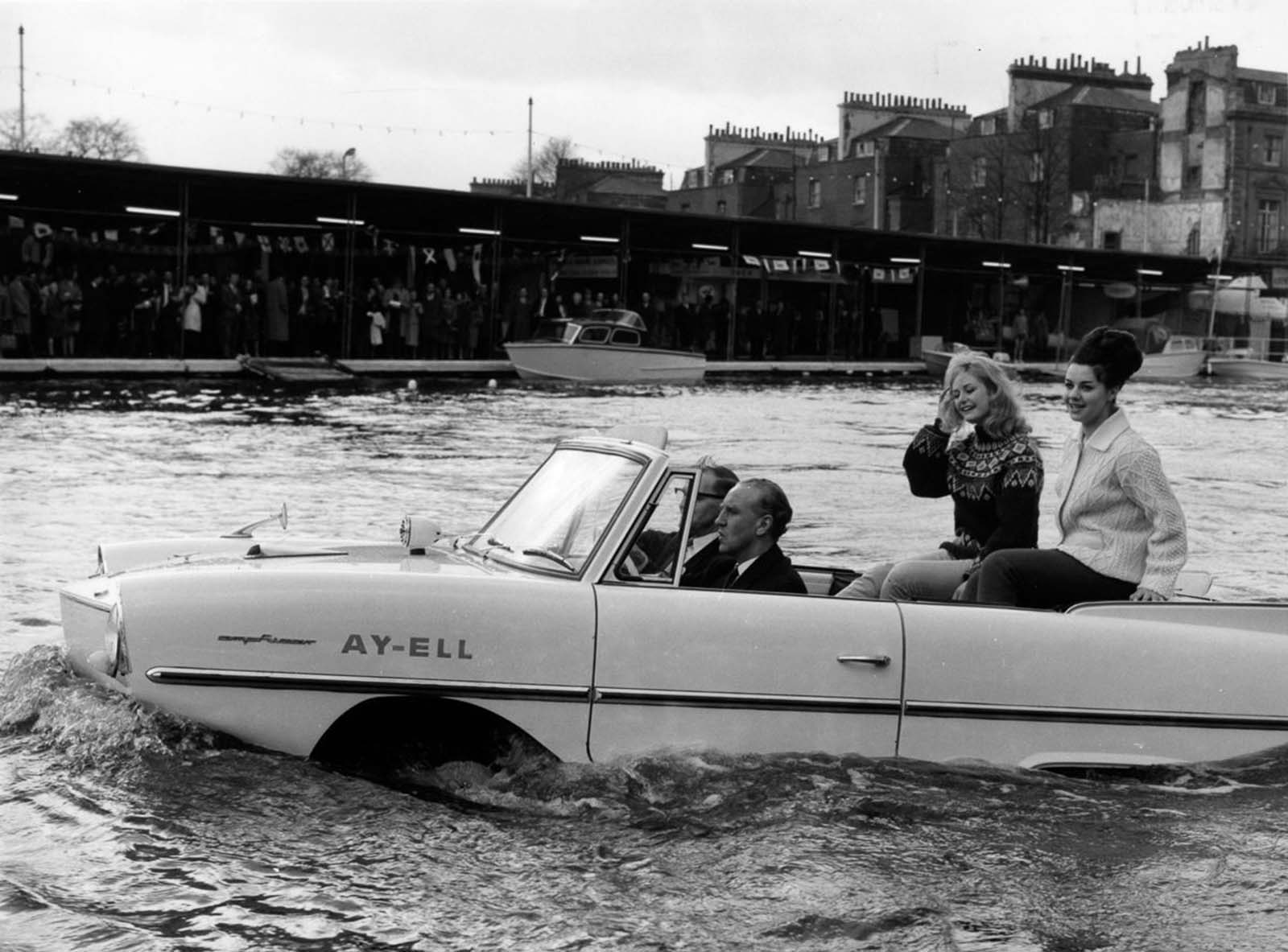 British Transport Minister Ernest Marples takes a ride in the Amphicar in London. 1964. 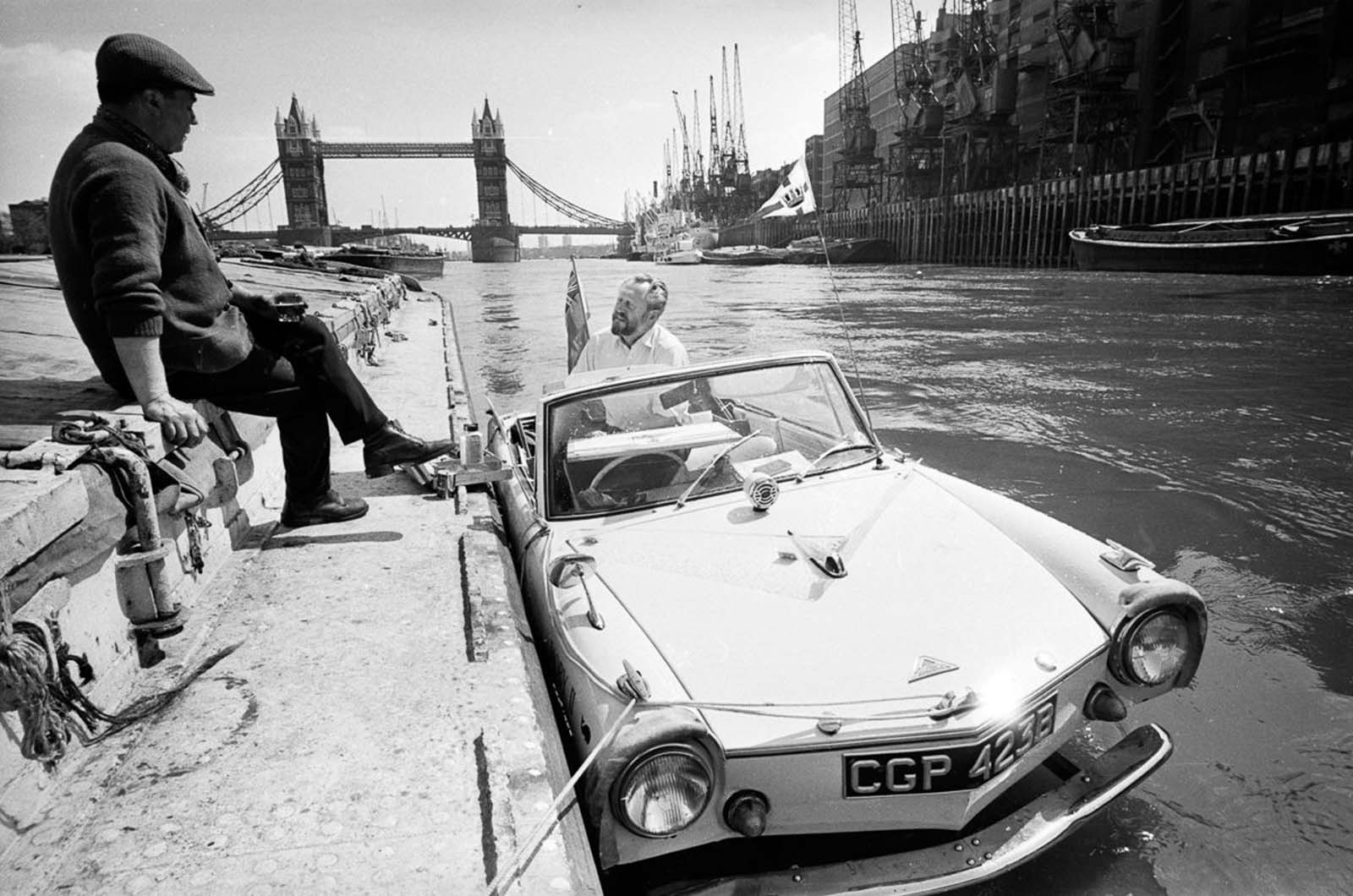 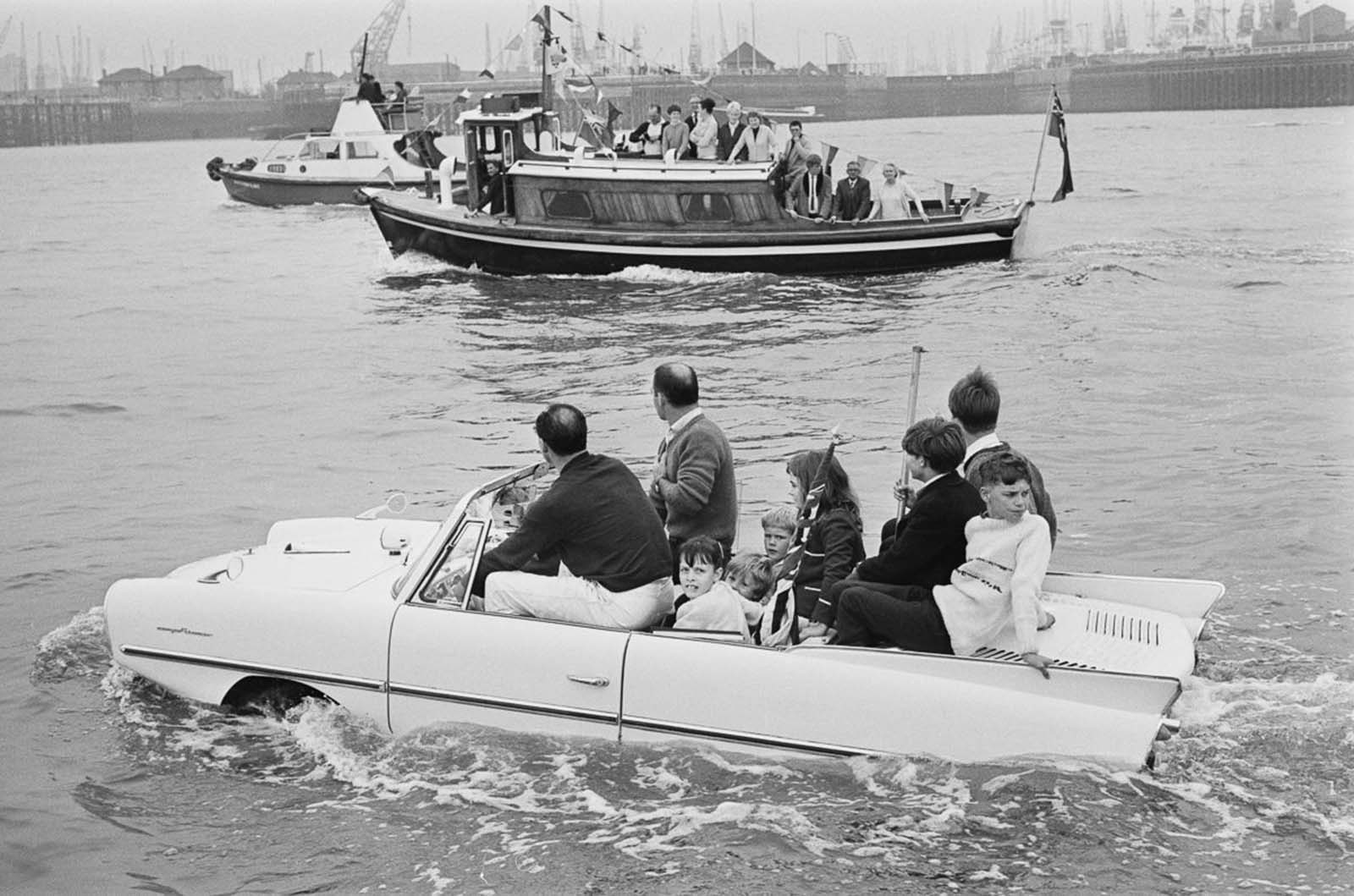 The Amphicar name is a portmanteau of “amphibious” and “car”. 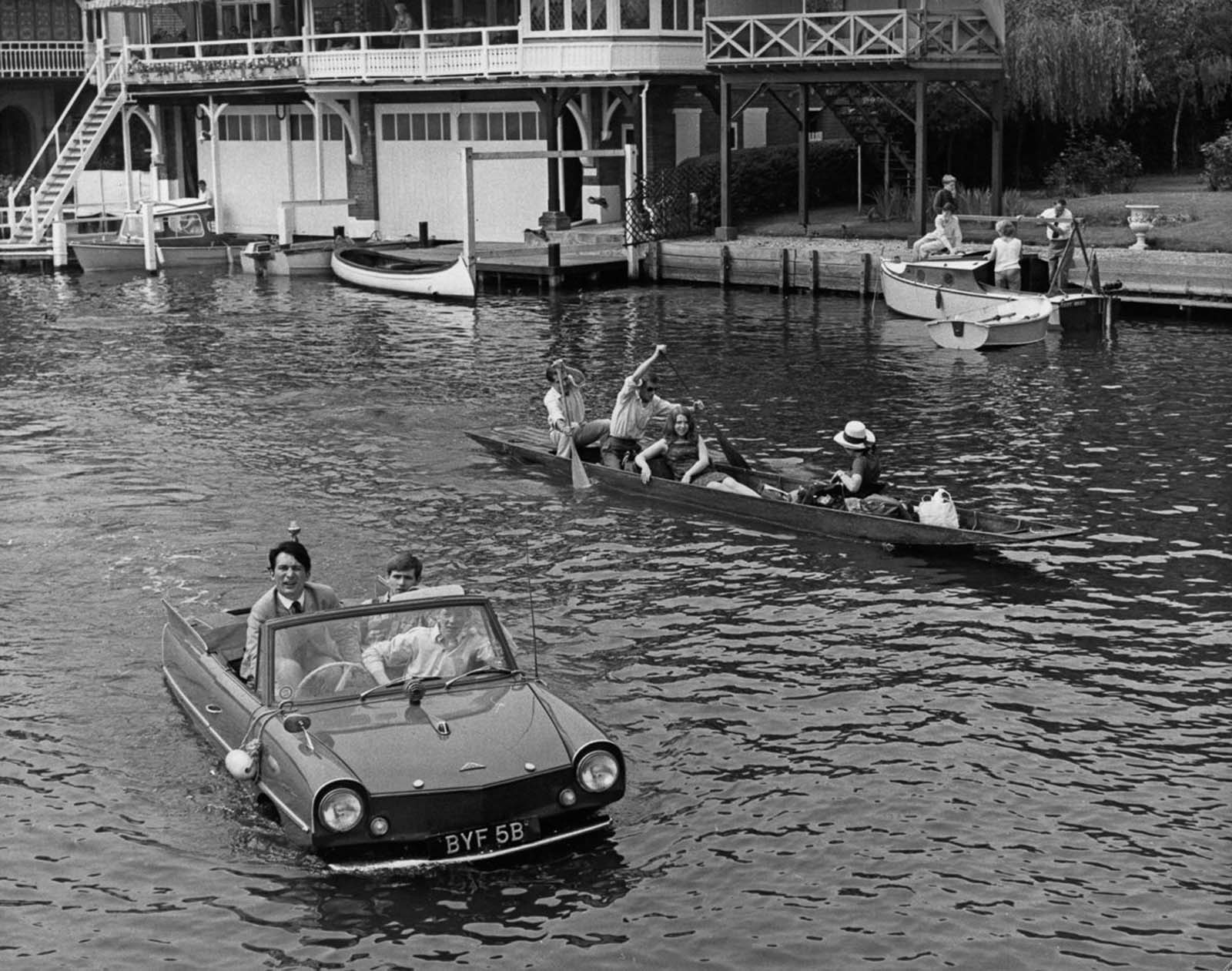 Front undersurface is slightly pointed and sharply cut away below. The wheels are set low, so that the vehicle stands well above ground level when on dry land. 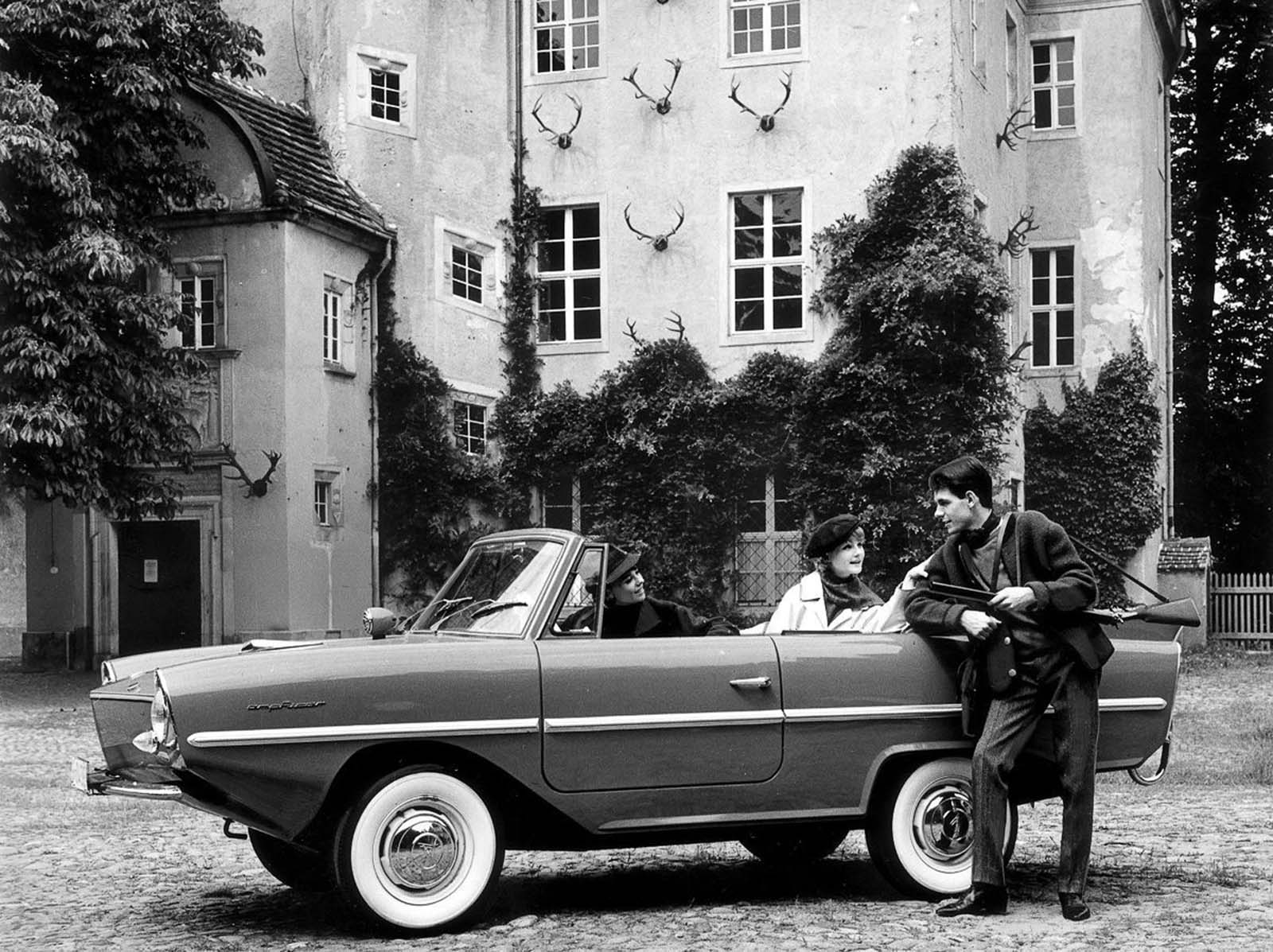 The one-piece windshield is curved. The foldable top causes the body style to be classified as cabriolet. 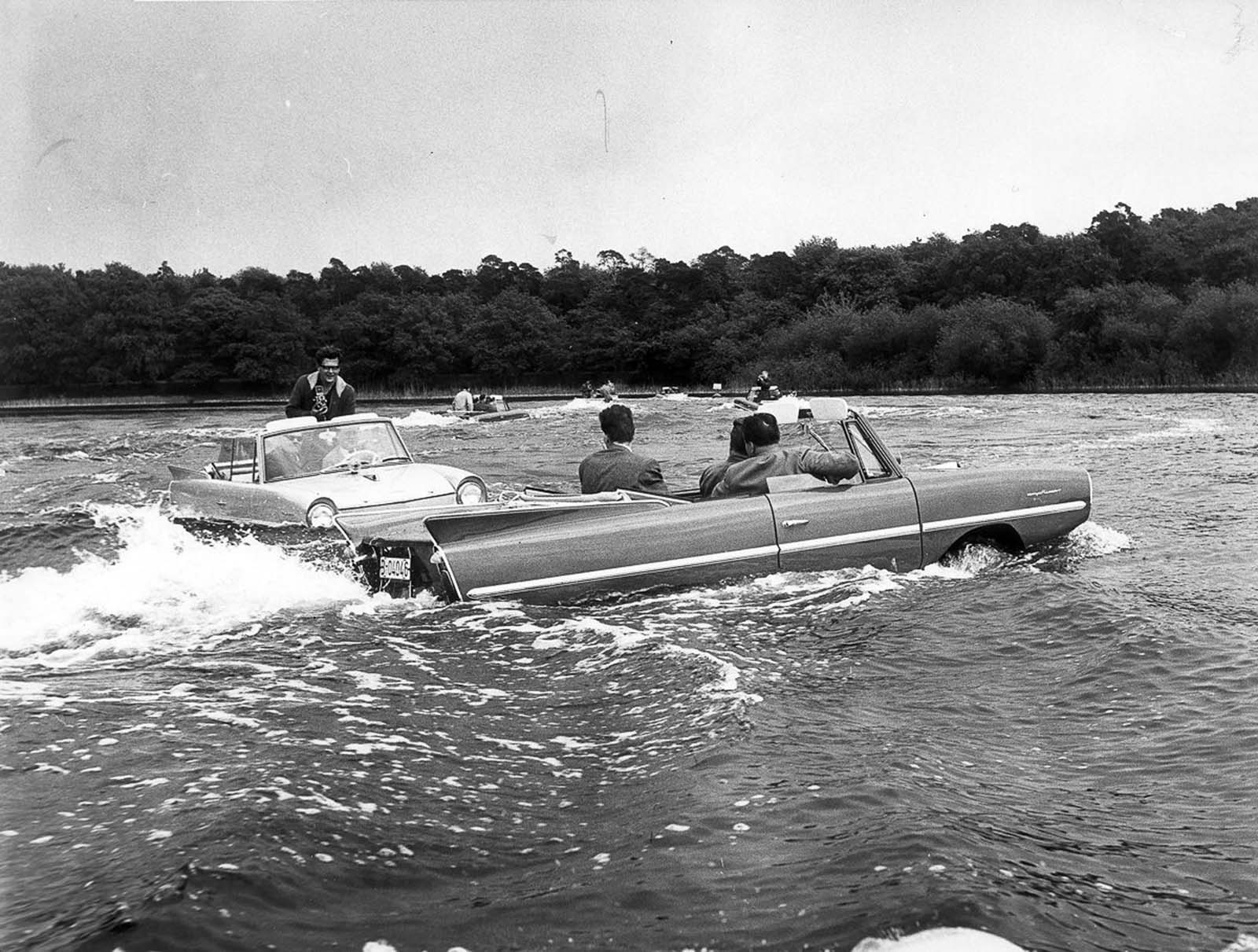 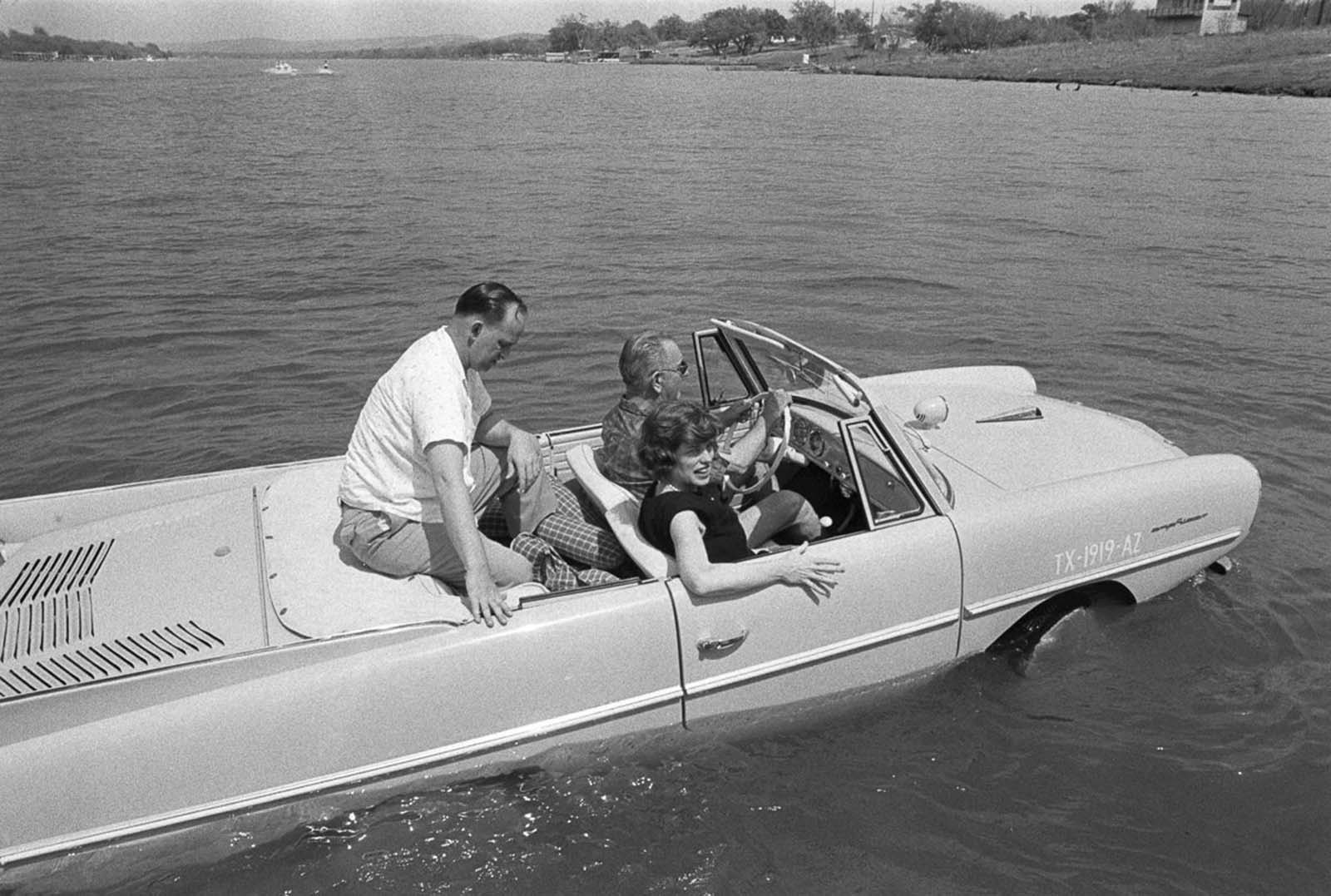 President Lyndon Johnson drives an Amphicar at his Texas ranch. 1965. 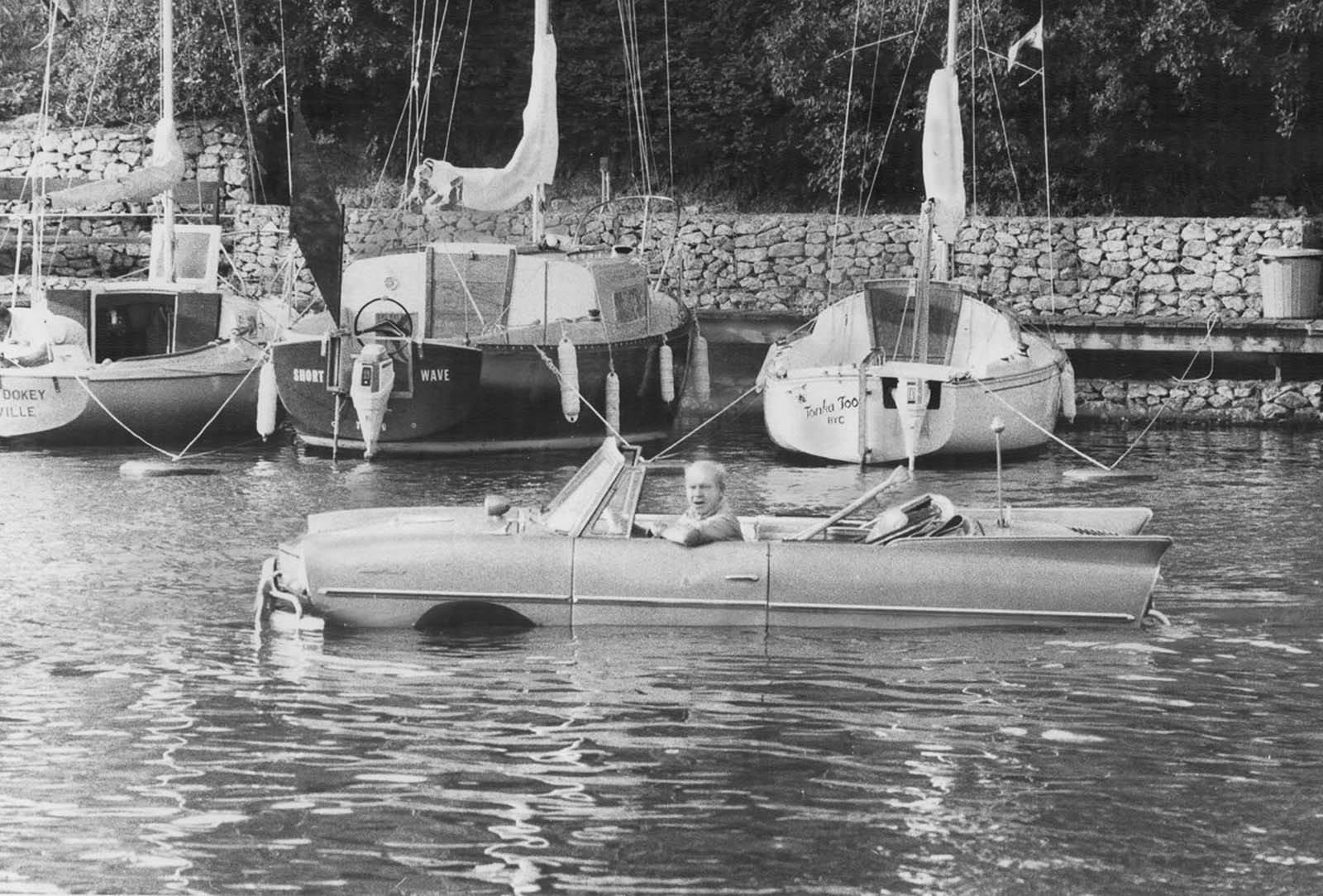 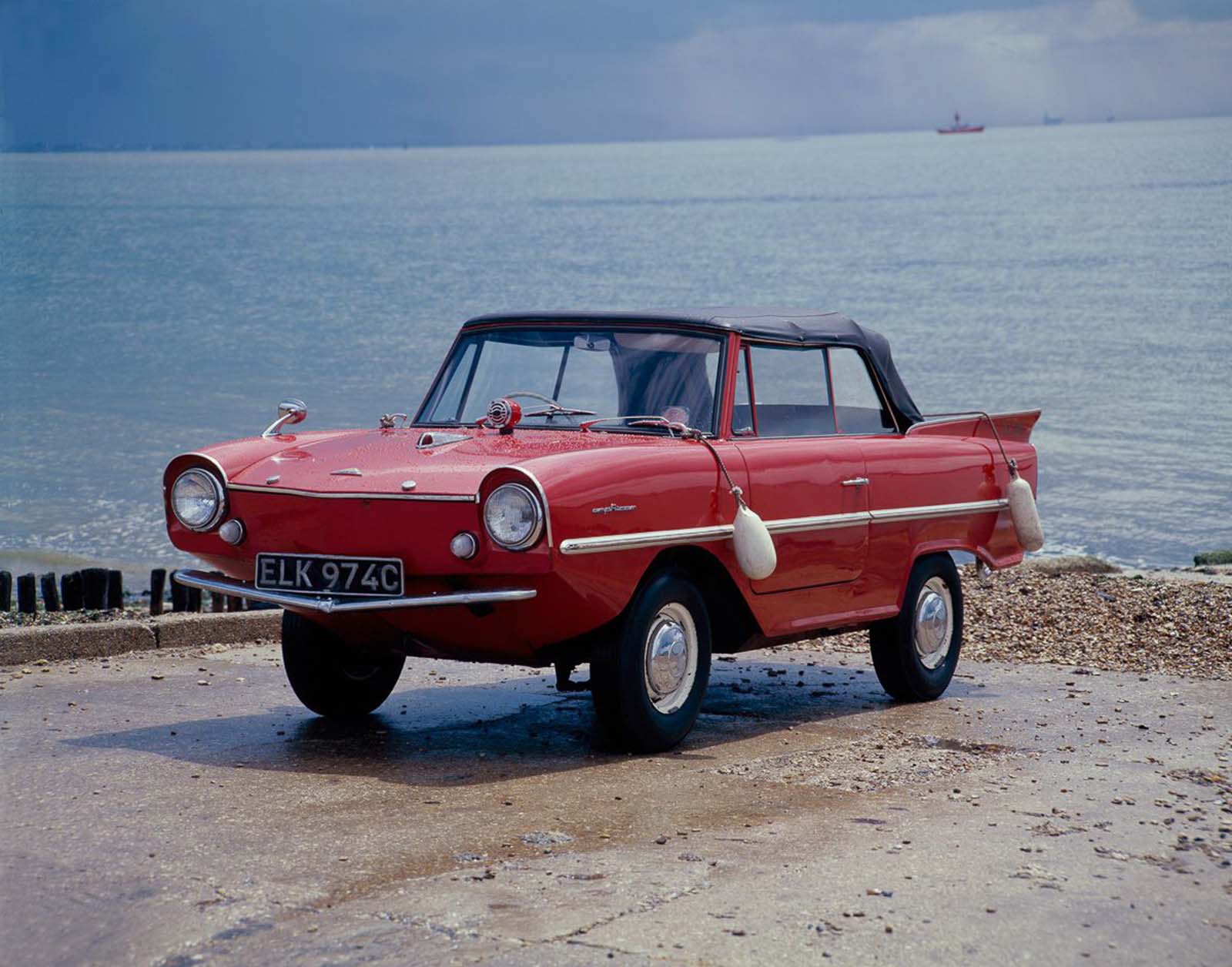