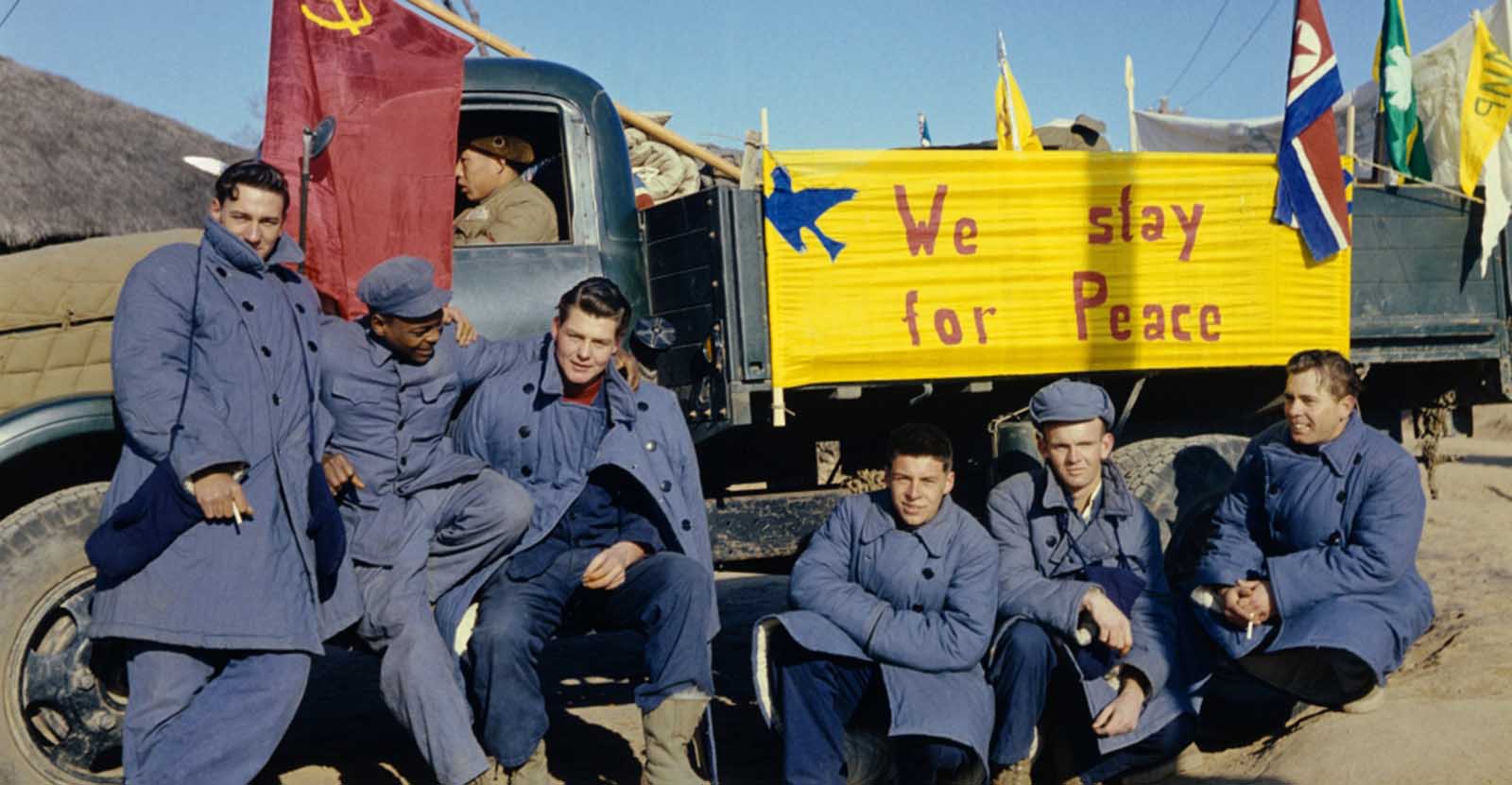 Twenty-one American soldiers refused to return to America at the end of the Korean War. The sign on the truck reads: “We Stay for Peace”.

On 27 June 1953, the United Nations Command (UNC) and North Korean Communist forces signed an armistice ending three years of fighting in Korea. Although the American-led UNC failed to win the entire peninsula, it successfully repelled Communist attacks south of the 38th parallel.

Moreover, though contrary to the 1947 Geneva Convention, which mandated the wholesale exchange of all POWs, President Truman’s policy of voluntary repatriation proved highly successful: 47,000 Chinese and North Korean prisoners of war struck a propaganda blow against their Marxist governments by choosing not to return to their homelands.

In September, however, 23 American prisoners of war also refused repatriation, sparking a nationwide debate among journalists, politicians, military officials, psychiatrists, and the soldiers themselves.

During a 90-day cooling-off period, the GIs were held in the neutral zone at Panmunjom, but only two changed their minds in response to entreaties by U.S. officials and letters from the GIs’ families.

The commonly accepted reason at the time was that they were brainwashed while held prisoner. This was effectively confirmed by 149 other POWs held by the Chinese/North Koreans who “reported that their captors had waged a systematic effort to break down their beliefs and entice them to collaborate”.

Time and Newsweek published articles looking for defects in the 21, to explain why they were able to be brainwashed. The magazines blamed reasons such as alcoholism, STDs, low IQs, and being “diseased”.

Race played an important role throughout the nationwide debate, especially since three of the 21 nonrepatriates were black. Discussion of the black nonrepatriates in the white press highlights public perceptions of Communism and civil rights in the mid-1950s.

For example, many publications noted the special effort the Chinese had made to woo black American soldiers, how they had stressed that in their Marxist nation all members of society were treated equally.

During the 90 days cooling-off period all 23 US soldiers were held on neutral territory. The 2 that left the group were court-martialed for desertion and collaboration, one was given a 20-year sentence, and the other 10. The remaining 21 were dishonorably discharged and journeyed in China.

Once in China, the soldiers were sent to a collective farm to work. Within 1.5 years three of them ran away and sought refuge at the British Embassy in Peking. By 1958, 7 more of the soldiers had left China.

By 1966, only two remained in China. One of the 21 returned to the US in 1965 and explained his actions in 1953 as being motivated by “anger by the recall of his idol, General Douglas MacArthur, who favored the use of nuclear weapons to end the war. During his two years as a prisoner, he increasingly felt abandoned by America”.

One of the three black soldiers (who returned to the US in 1966) explained that discrimination in the US was the reason he went to China in 1953. In 1991, he said: “Brainwashed? The Chinese unbrainwashed me. The black man had his mind brainwashed long before the Korea War”.

As the soldiers trickled back to the US, an additional reason was revealed: A handful apparently had informed on their fellows while in POW camps, and rather than rejecting the economic and political situation in the United States they were simply afraid to return.