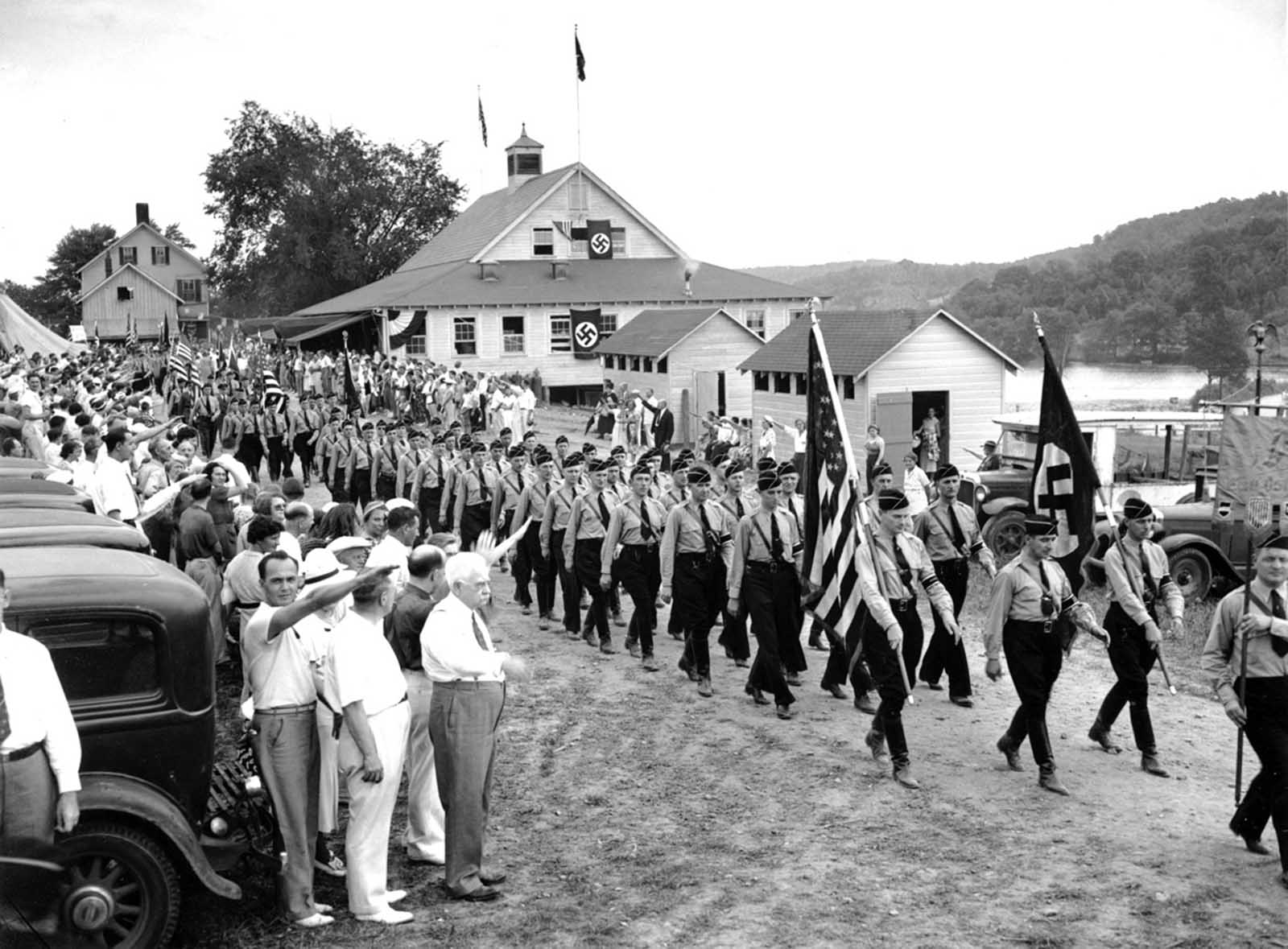 After Hitler’s rise to power in 1933, some German Americans formed groups to support the Nazi party in Germany and attempt to influence American politics. The most notorious of these groups was the “German-American Bund”, which tried to model itself as an American arm of Hitler’s Third Reich.

Although these groups wore uniforms and touted swastikas, in reality, they had few ties to Nazi Germany and their support among the larger German-American community was minimal. Nevertheless, the group strongly promoted hatred for Jews and strove to bring Nazi-style fascism to the United States.

Shortly thereafter the “Friends of New Germany” was created with help from the German consul in New York City. The organization was based in New York but had a strong presence in Chicago.

The organization led by Spanknobel was openly pro-Nazi and engaged in activities such as storming the German-language New Yorker Staats-Zeitung with the demand that Nazi-sympathetic articles be published, and the infiltration of other non-political German-American organizations. Spanknobel was ousted as the leader and subsequently deported in October 1933 when it was discovered he had failed to register as a foreigner agent. 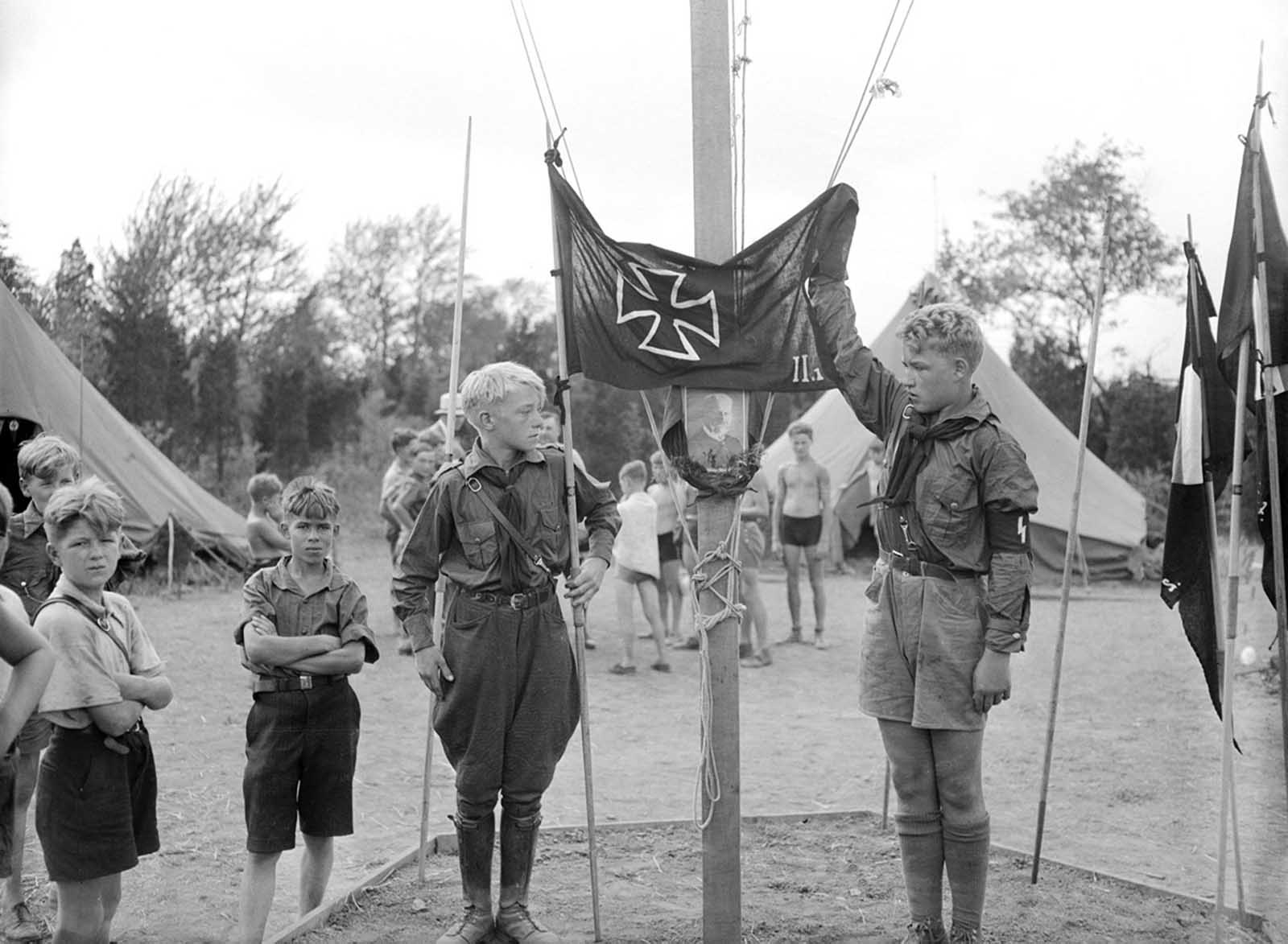 The organization existed into the mid-1930s, although it always remained small, with a membership of between 5,000-10,000. Mostly German citizens living in America and German emigrants who only recently had become citizens composed its ranks.

The organization busied itself with verbal attacks against Jews, Communists, and the Versailles Treaty. Until 1935 the organization was openly supported by the Third Reich, although soon Nazi officials realized the organization was doing more harm than good in America and in December 1935 Hess ordered that all German citizens leave the Friends of New Germany; also, all the group’s leaders were recalled to Germany.

Not long after the Friends of New Germany fell out of favor with the Nazis and was dismantled, a new organization with similar goals arose in its place. Formed in March 1936 in Buffalo/New York and calling itself the German-American Bund or Amerikadeutscher Volksbund, the organization chose Fritz Kuhn as its Bundesleiter. 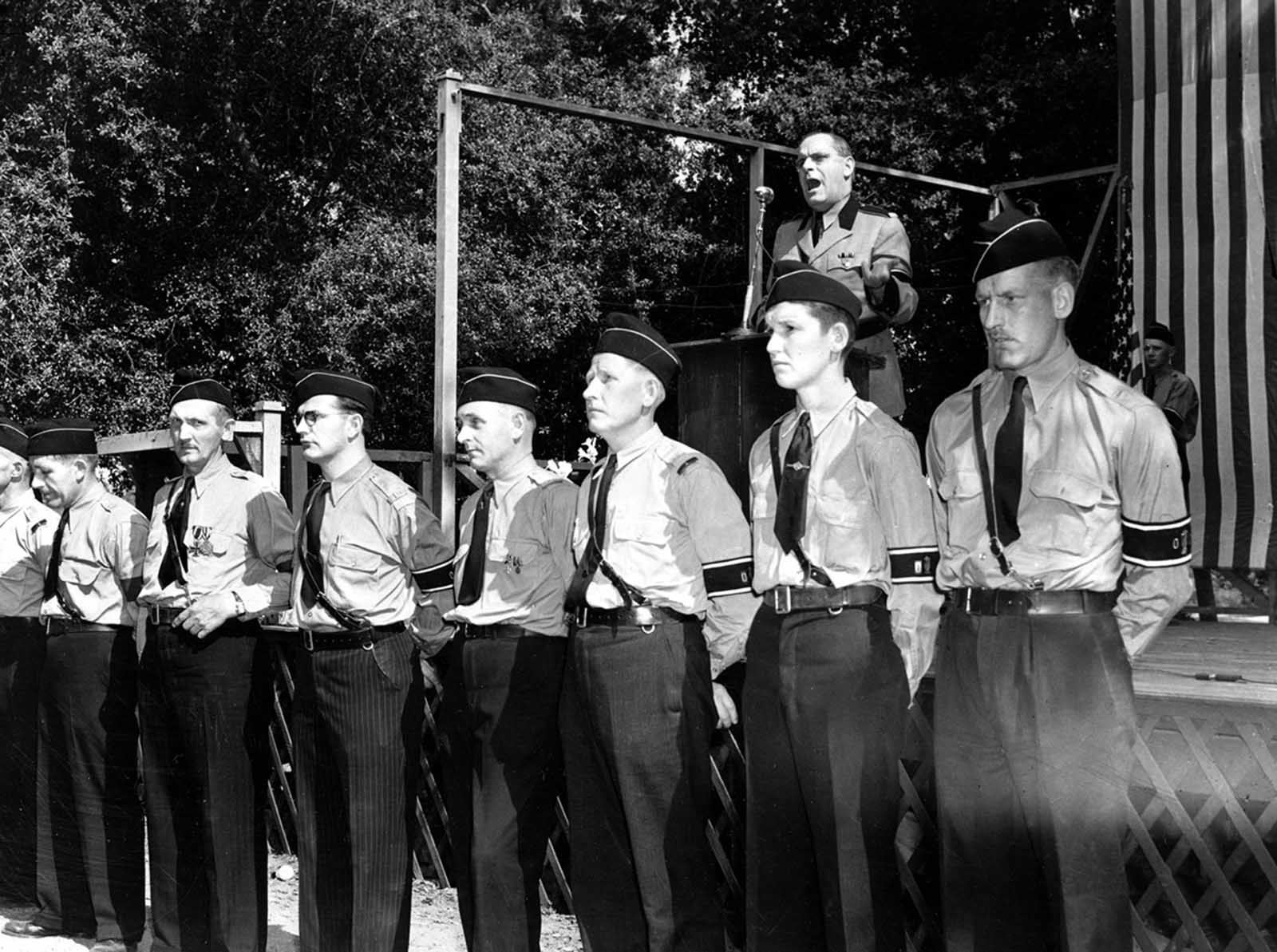 Members of the German-American Bund form a guard of honor before the speaker’s stand as Fritz Kuhn, leader of the Bund, addresses a crowd at Hindenberg Park, La Crescenta, near Los Angeles, California, on April 30, 1939.

The organization was soon filled with those calling themselves “Germans in America” and dreamed of the day when Nazism would rule the United States.

Although they were instructed not to accept German citizens in their organization, they were not about to turn down anyone interested and many immigrants joined. It is estimated that around 25% of Bund members were German nationals—the rest being mostly first or second-generation Germans.

The Bund soon began to hold rallies filled with swastikas, Nazi salutes, and the singing of German songs. The Bund created recreational camps such as Camp Siegfried in New York and Camp Nordland in New Jersey. It also established Camp Hindenburg in Wisconsin and the group met frequently in Milwaukee and Chicago beer halls. 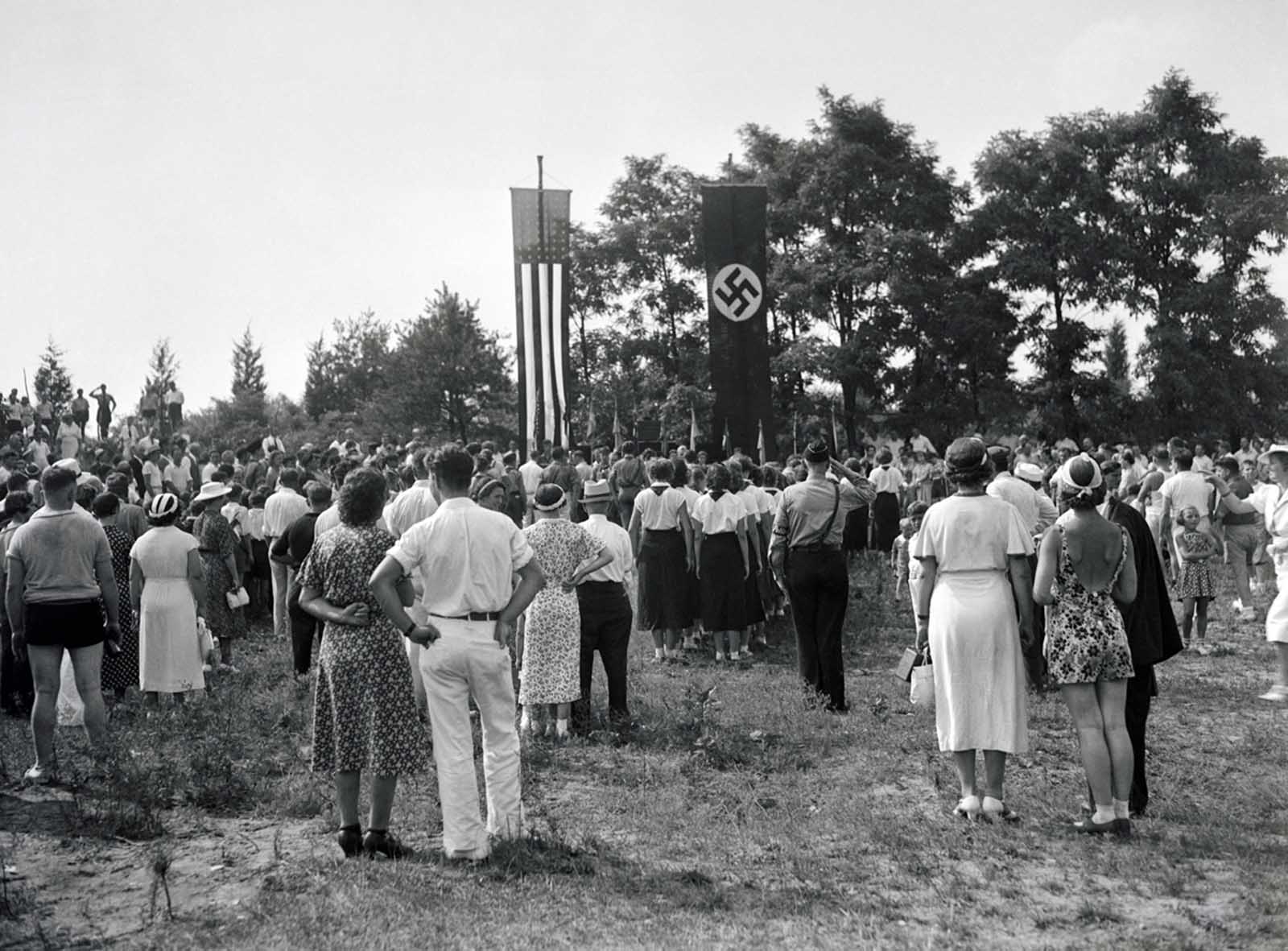 The Bund created an American version of the Hitler Youth that educated children in the German language, German history and Nazi philosophy. Although this organization tried to differentiate itself from the previously unsuccessful Friends of New Germany, the German Foreign Ministry commented that “In reality…they are the same people, with the same principles, and the same appearance”.

The Bund began attracting the attention of the federal government in the summer of 1937 as rumors spread that Kuhn had 200,000 men ready to take up arms.

During that summer an FBI probe of the organization was conducted but no evidence of wrongdoing was found. Later in 1938 Martin Dies of the House Un-American Activities Committee wildly proclaimed that Kuhn had 480,000 followers. More accurate records show that at the peak of his power in 1938 Kuhn had only 8,500 members and another 5,000 “sympathizers”.

In February 1939 Kuhn and the Bund held their largest rally in Madison Square Garden—ironically, one which marked the beginning of the end for the organization. 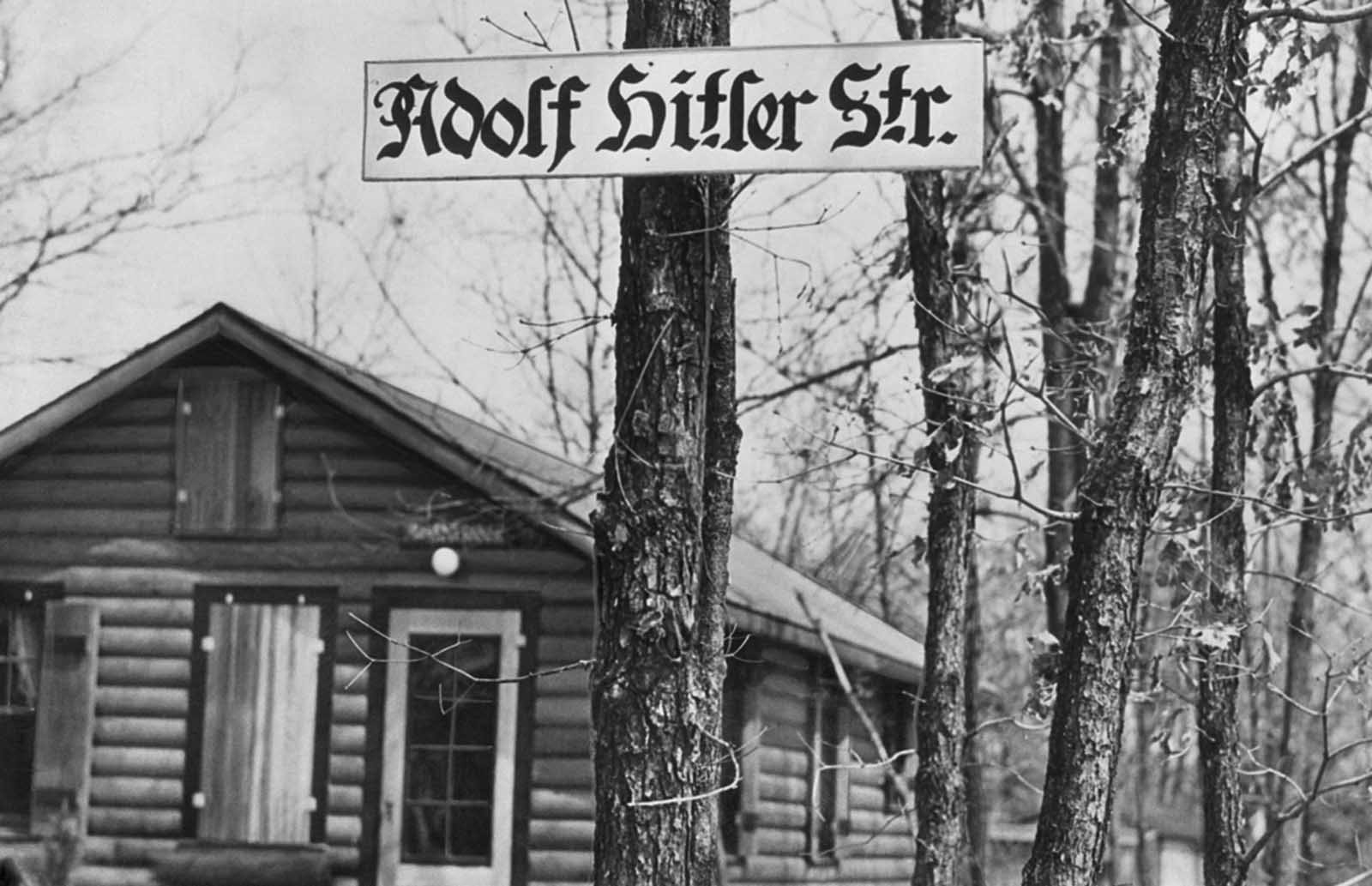 This “Adolf Hitler Strasse” is a street running through “Camp Siegfried,” a summer camp of the German American Bund in Yaphank, Long Island, New York.

In front of a crowd of 22,000, flanked by a massive portrait of George Washington, swastikas, and Americans flags, Kuhn attacked FDR for being part of a Bolshevik-Jewish conspiracy, calling him “Frank D. Rosenfeld” and criticizing the New Deal, which Kuhn had deemed “the Jew Deal”. Three thousand members of the Ordnungsdienst, the militant arm of the Bund, were on hand and fistfights broke out in the crowd among those who had come to heckle Kuhn.

After the rally, New York District Attorney Thomas Dewey arrested Kuhn on charges of larceny and forgery. He not only was convicted of these charges but he also confessed to being arrested multiple times for drunkenness, carrying on extra-marital affairs, and pocketing $15,000 from the Madison Square Garden rally. After the war, Kuhn was deported to Germany; he died there unceremoniously in 1951.

Following Kuhn’s arrest, the Bund slowly withered away, until its dissolution on 8 December 1941, after the attack on Pearl Harbor. After the United States declared war on Germany, federal officials began to arrest Bund officials. Kuhn’s successor Gerhard Kunze was captured in Mexico and sentenced to 15 years of prison for “subversive activities”.

In the end, the Bund of German immigrants held little power, if any, and often made average Americans less sympathetic to Germany, as the Bund’s extreme anti-Semitic and pro-Nazi views did not play well with the American public. Even Nazi Germany realized this and attempted to distance itself from the Bund. 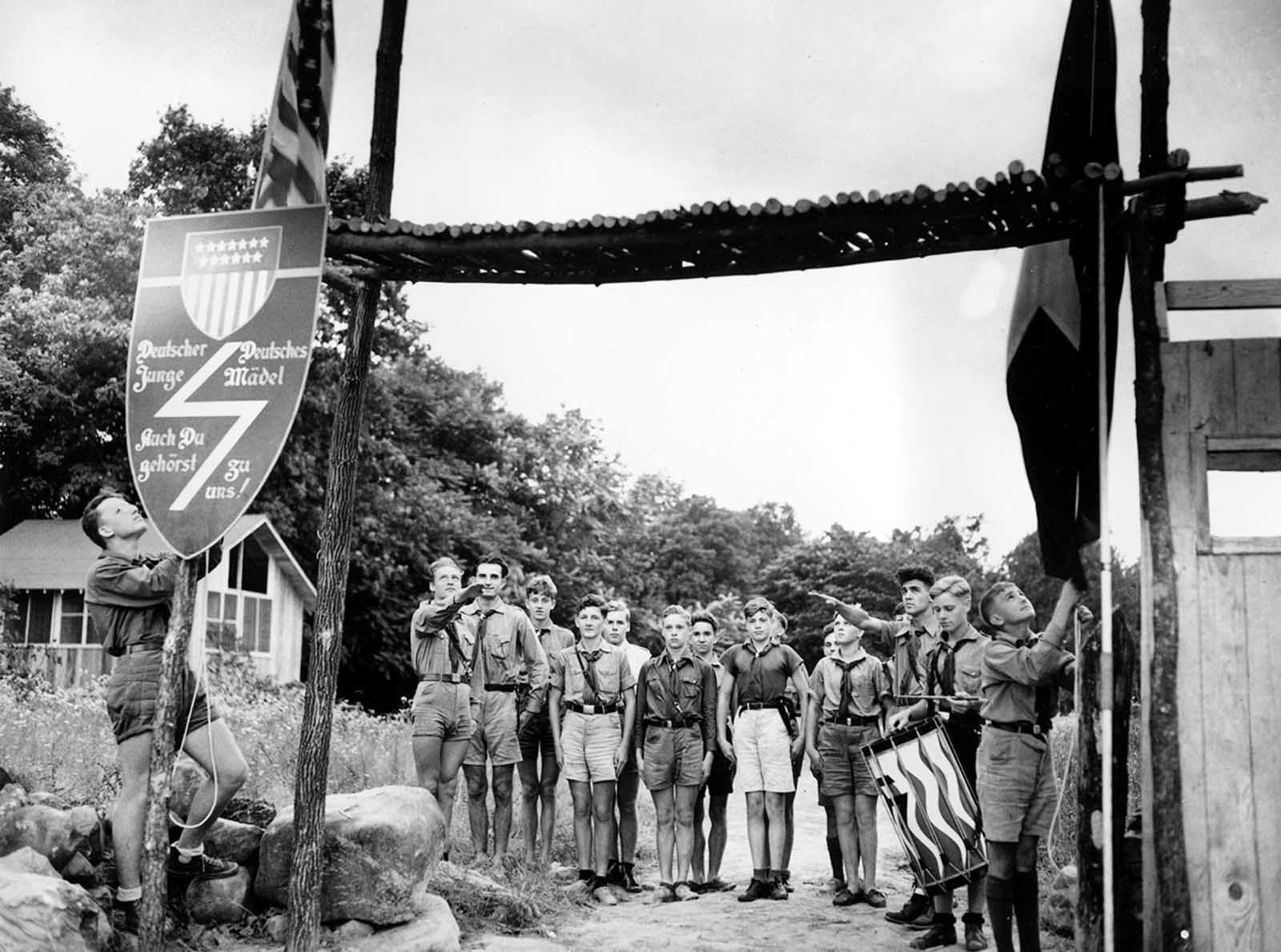 Youths at a German-American Bund camp stand at attention as the American flag and the German-American Youth Movement flag, right, are lowered in a ceremony at sundown in Andover, New Jersey, on July 21, 1937. 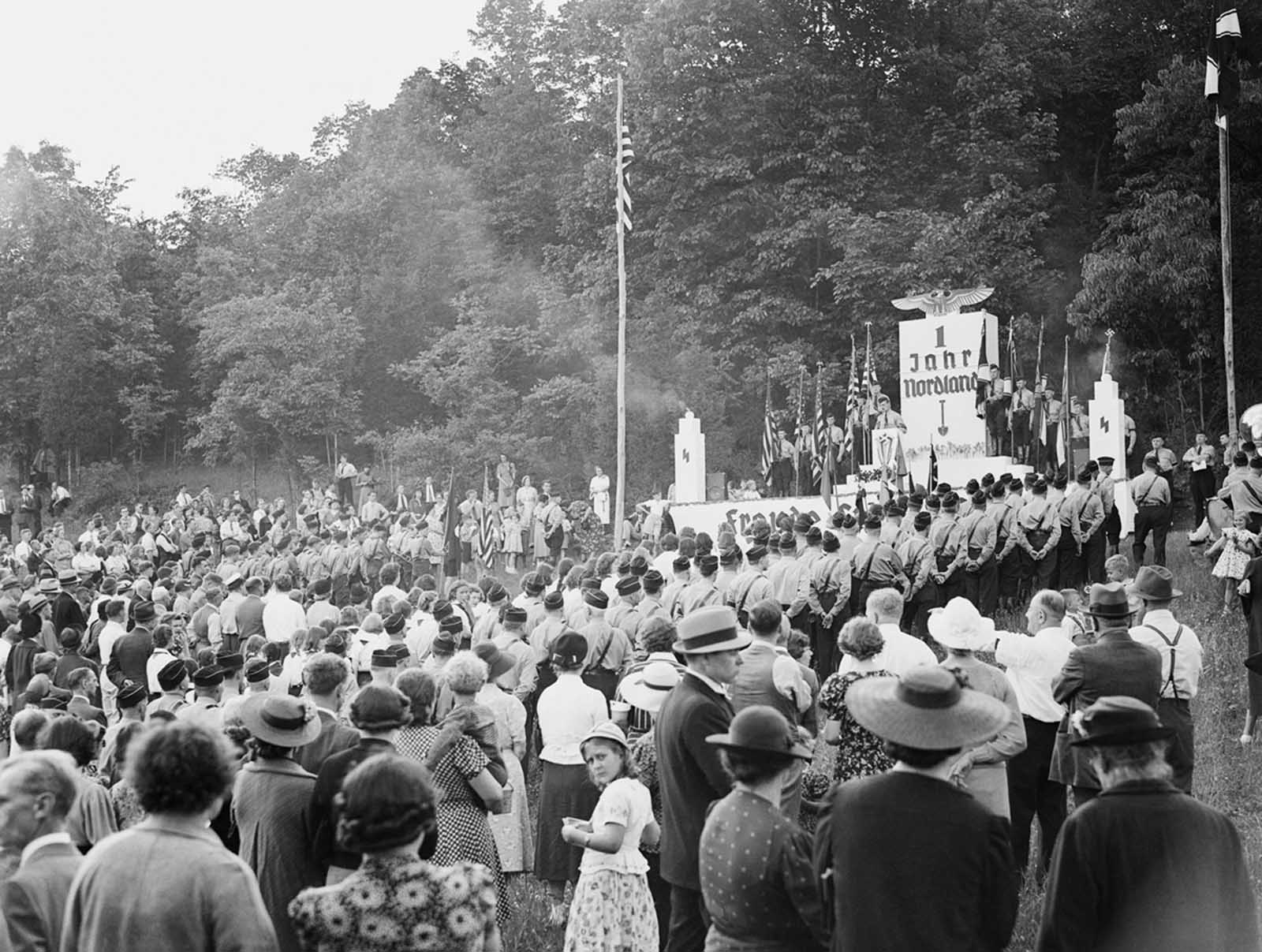 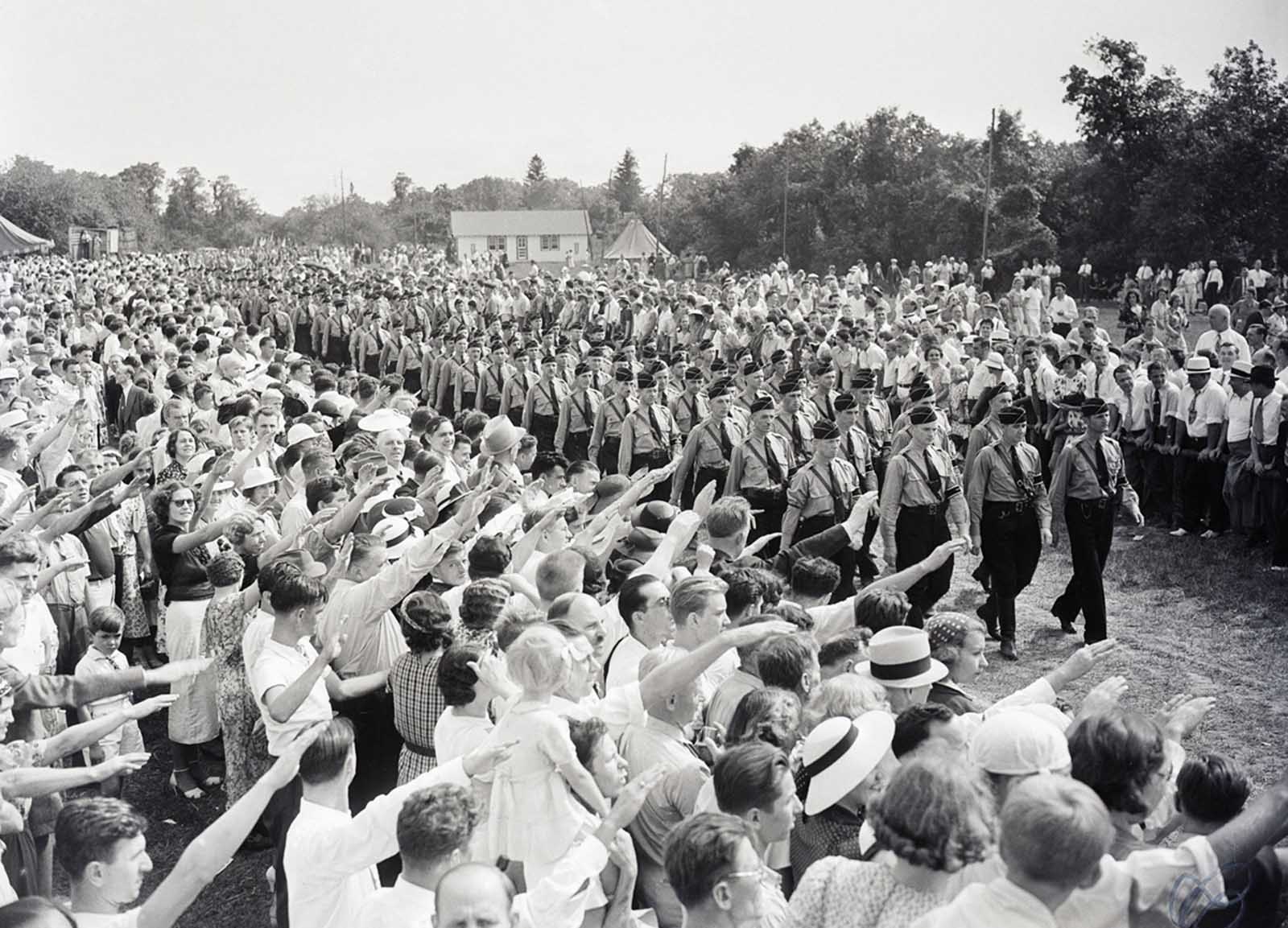 Hundreds of German Americans give the Nazi salute to young men marching in Nazi uniforms. The event was a German Day celebration sponsored by German American Bund at Camp Sigfried on Long Island. 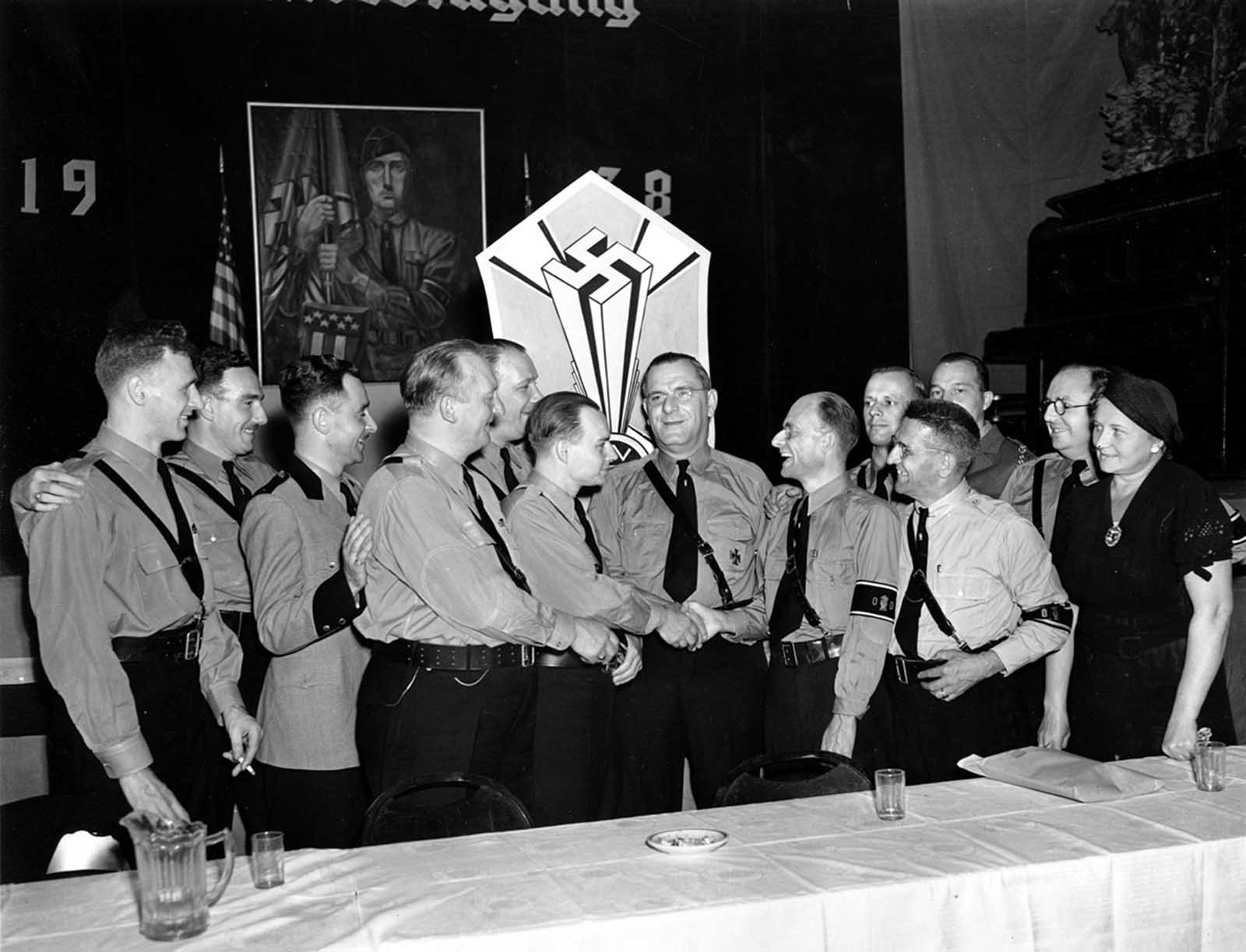 Fritz Kuhn, center facing forward, is congratulated by fellow officers of the German-American Bund in New York on September 4, 1938. Kuhn was unanimously re-elected on September 3 as National leader of the Bund, a pro-Nazi organization holding its sixth annual convention. 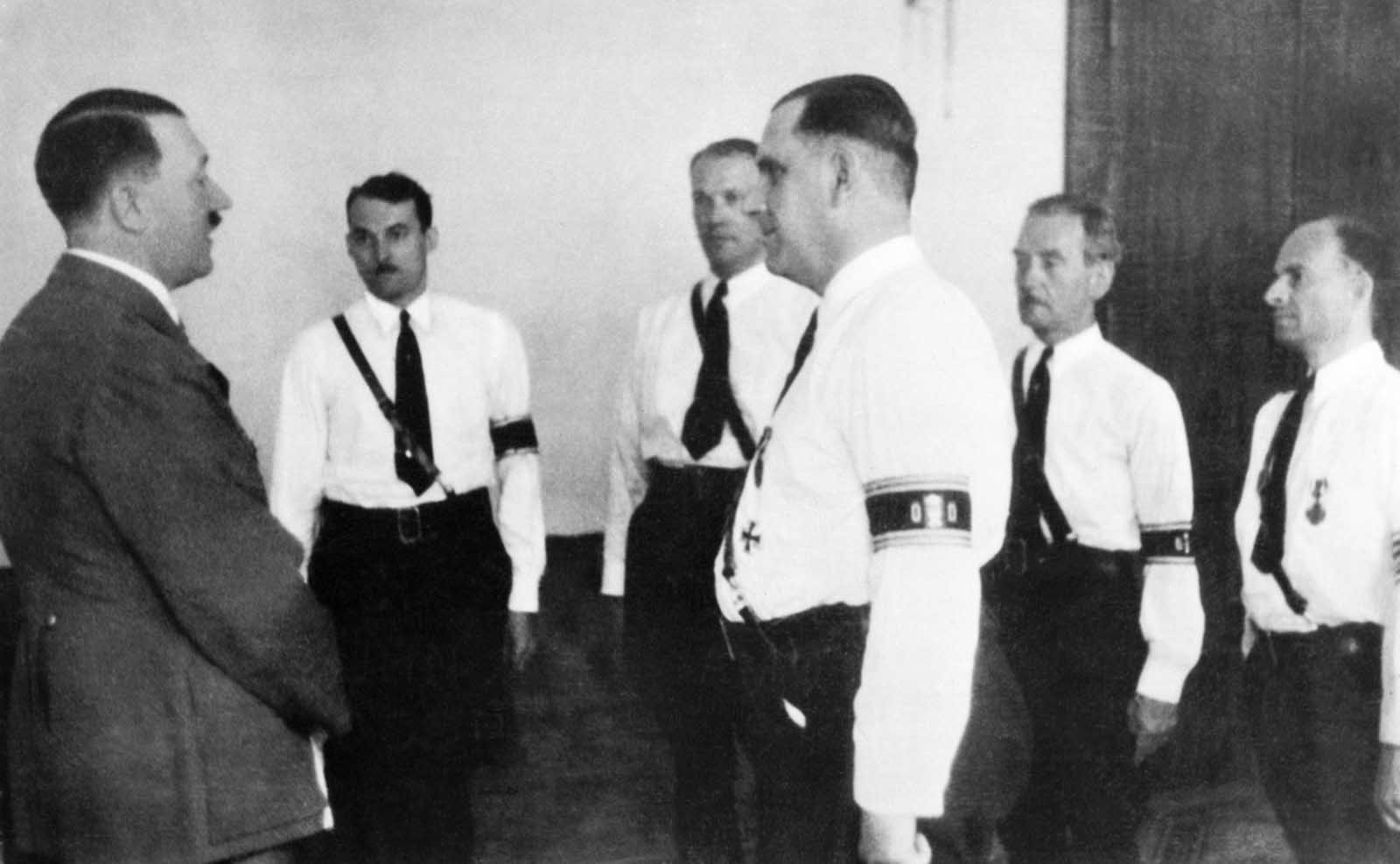 German American Bund leader Fritz Kuhn, (center, front), and members of his staff pay their respects to Germany’s Chancellor Adolf Hitler, during a visit to Berlin. 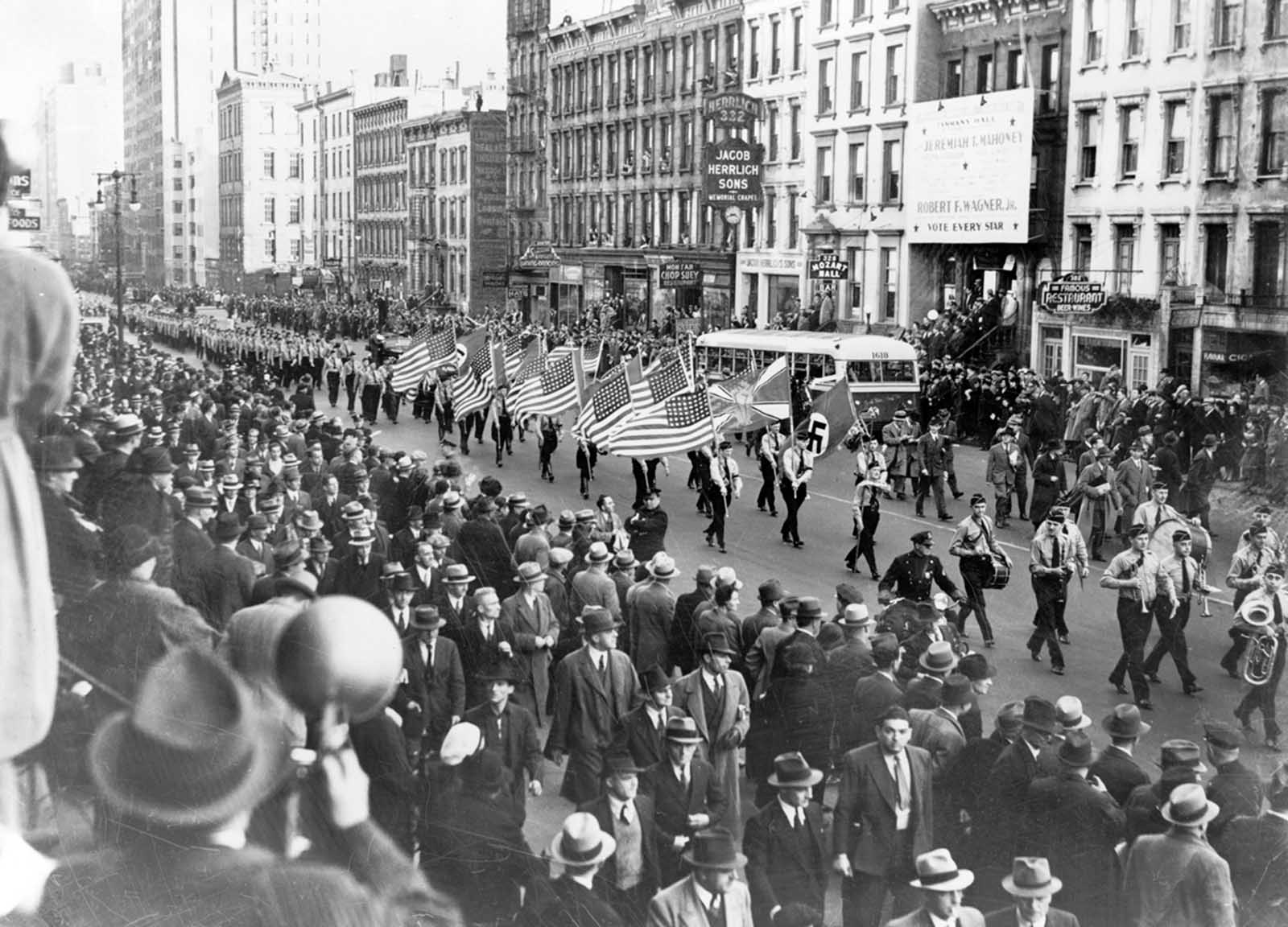 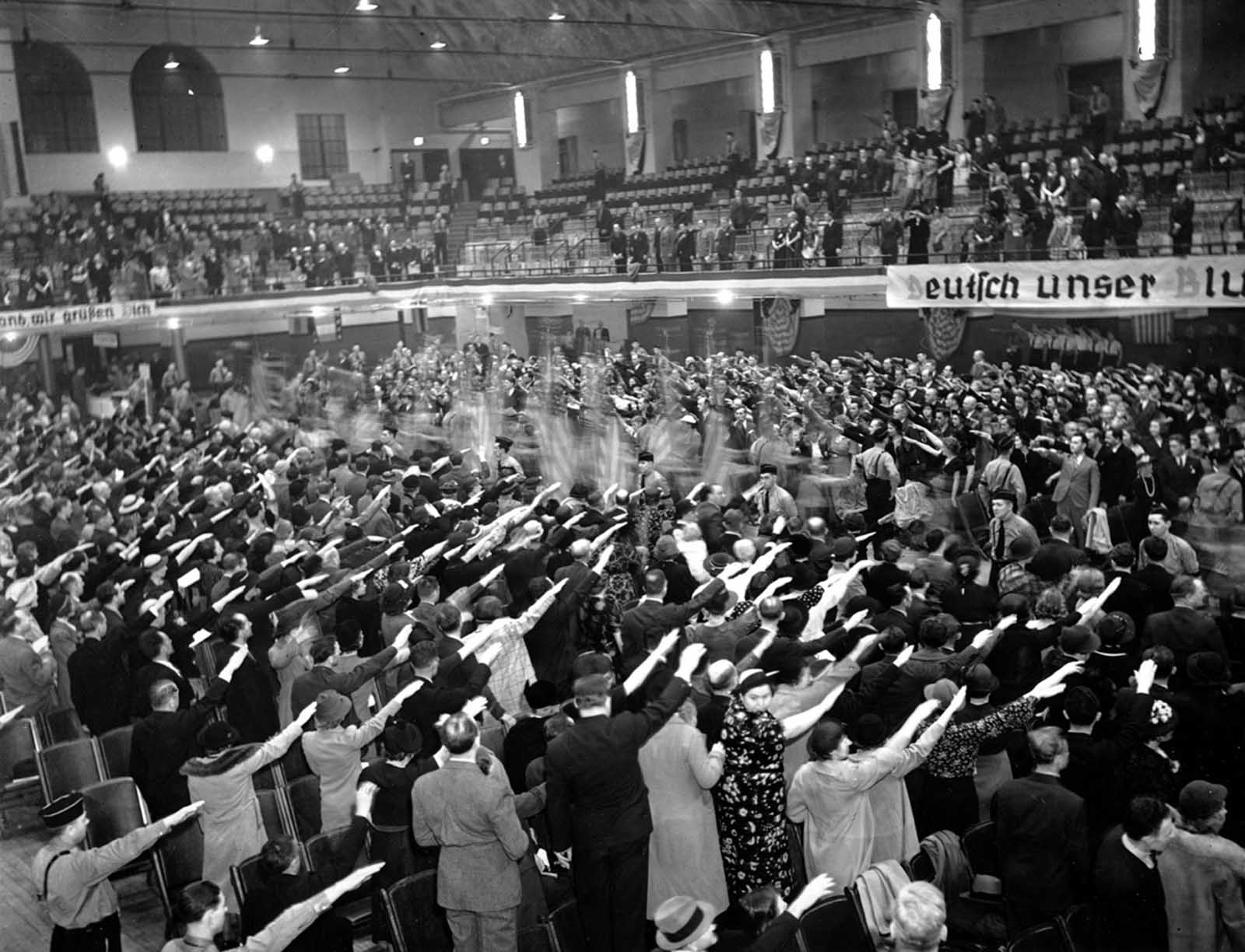 Pro-Nazi members of various singing and gymnastic societies salute a procession of flags at White Plains Hall in New York in the 1930s. They were gathered for a German Day celebration. The German-American Bund disclaimed this large group 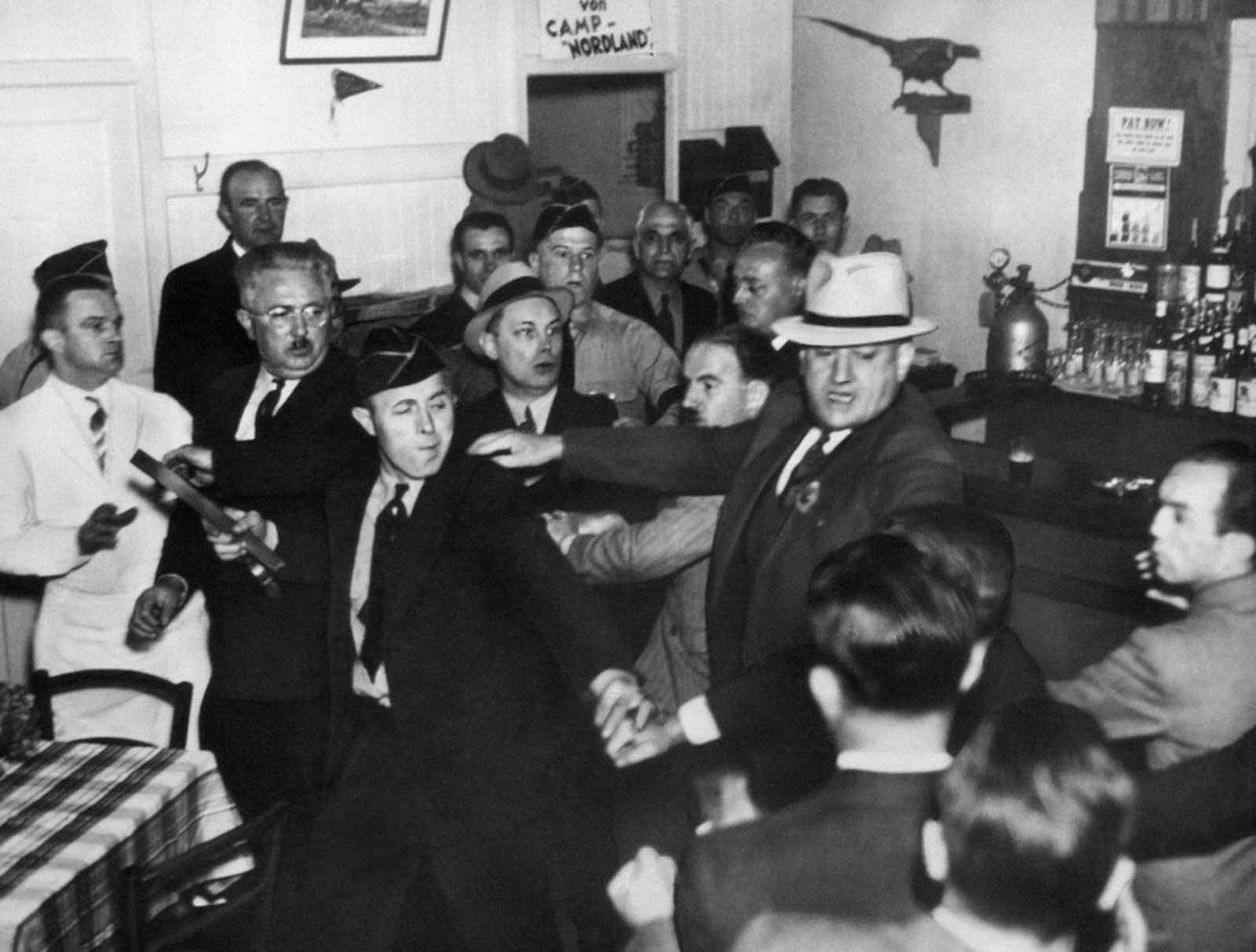 An anti-Nazi crowd rushed the bar entrance of the German-American Bund Hall in Union City, New Jersey, on October 2, 1938 where Fritz Kuhn, bunds-fuehrer, was to make a “victory” speech celebrating Hitler’s occupation of Czechoslovakia. Bund members, including one with a belt as weapon drove the protesters out, but the meeting was disrupted. 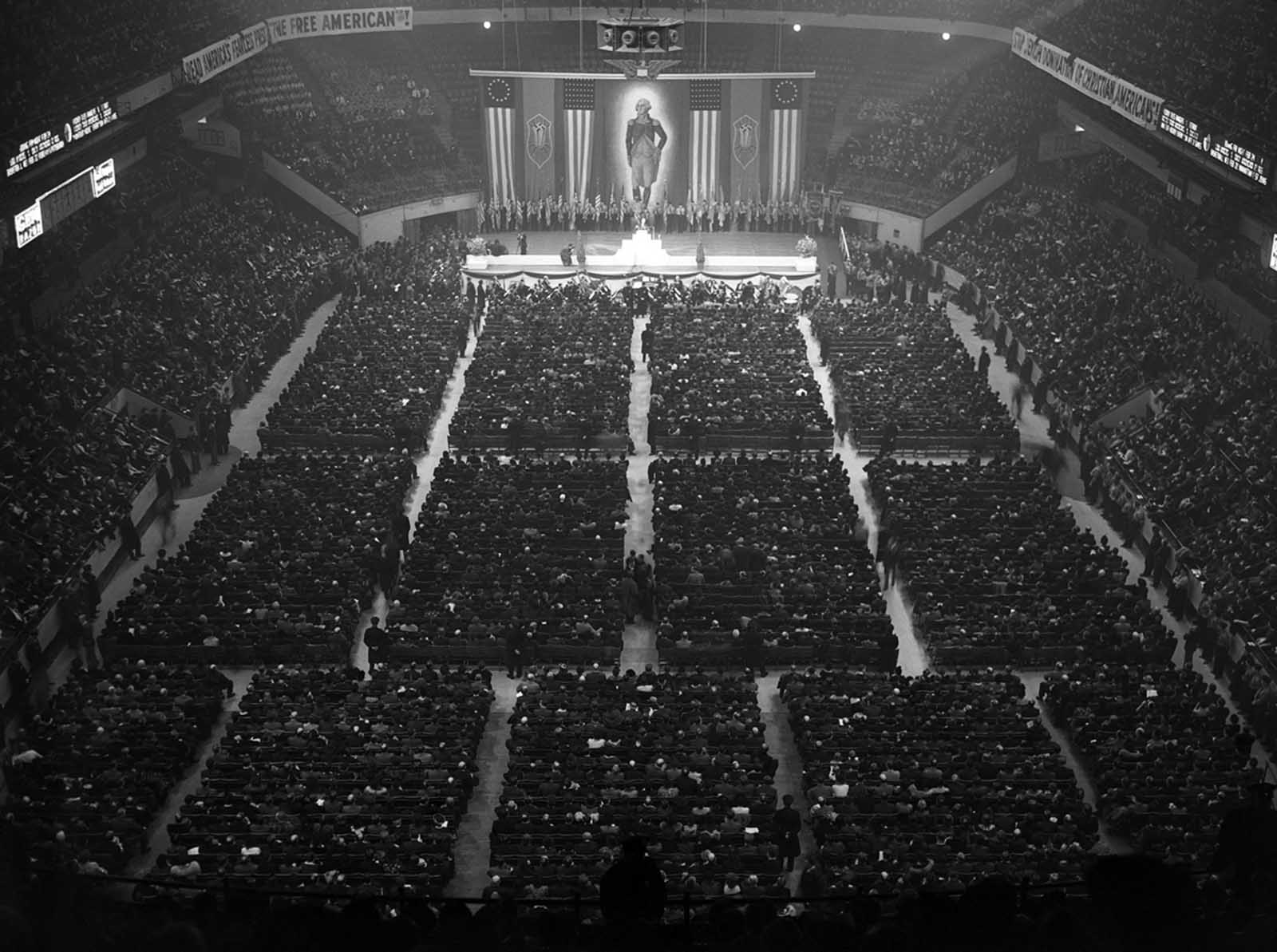 A crowd of approximately 20,000 attends a German American Bund Rally at New York’s Madison Square Garden on February 20, 1939. At center is a large portrait of George Washington, claimed as an icon by the Bund, who called him “the first Fascist”, claiming Washington “knew democracy could not work”. Read more about this picture. 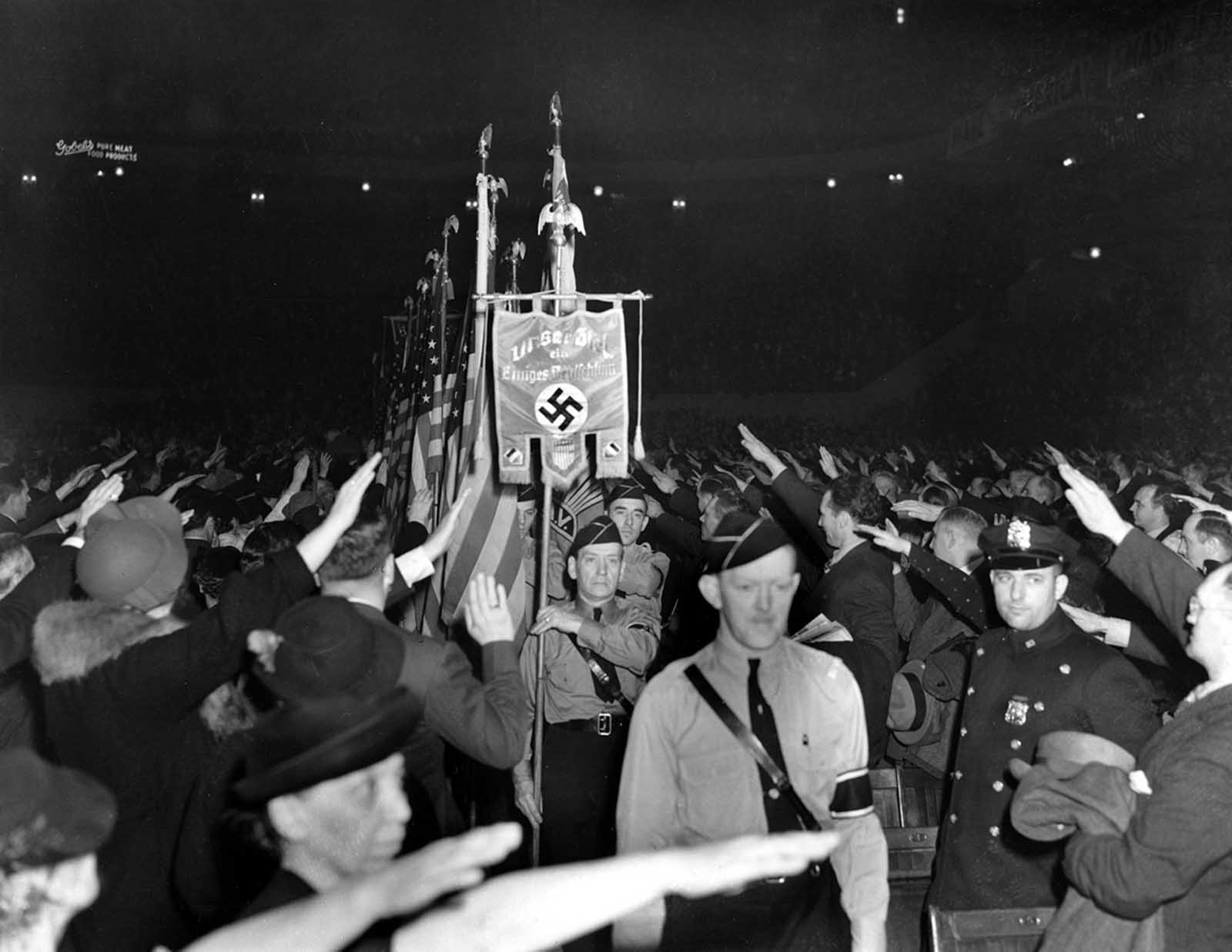 The crowd responds with a Nazi salute as uniformed members of a German-American Bund color guard march at a gathering in New York’s Madison Square Garden, on February 20, 1939. 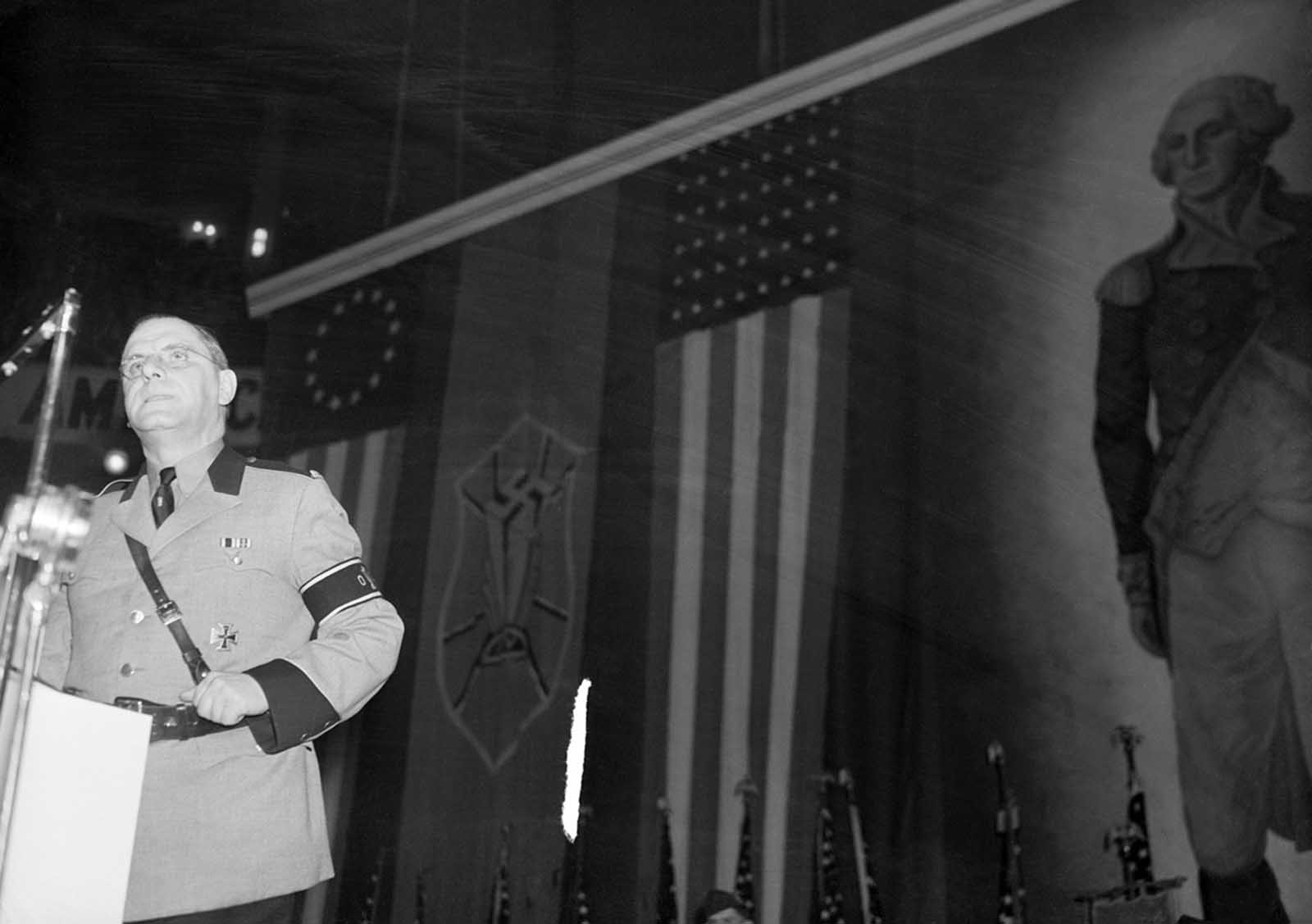 February 20, 1939. Original Caption: The local Fuehrer holds forth. Hewing to the verbal line and letting the syllables fall where they may, Fritz Kuhn, local Fuehrer, leader of the German American Bund, addresses the Bund’s heavily guarded “Americanization” rally at Madison Square Garden. All during the rally scuffles occurred outside as the Anti-Nazis massed outside rushed the cordon of police in attempts at forcing entry to come to grips with Kuhn’s storm troopers. Herr Fritz was himself the target of a punch when a Jewish youth attempted to attack him on the rostrum as he launched into an anti-Jewish harangue. But Kuhn’s strong-arm men came to his rescue. 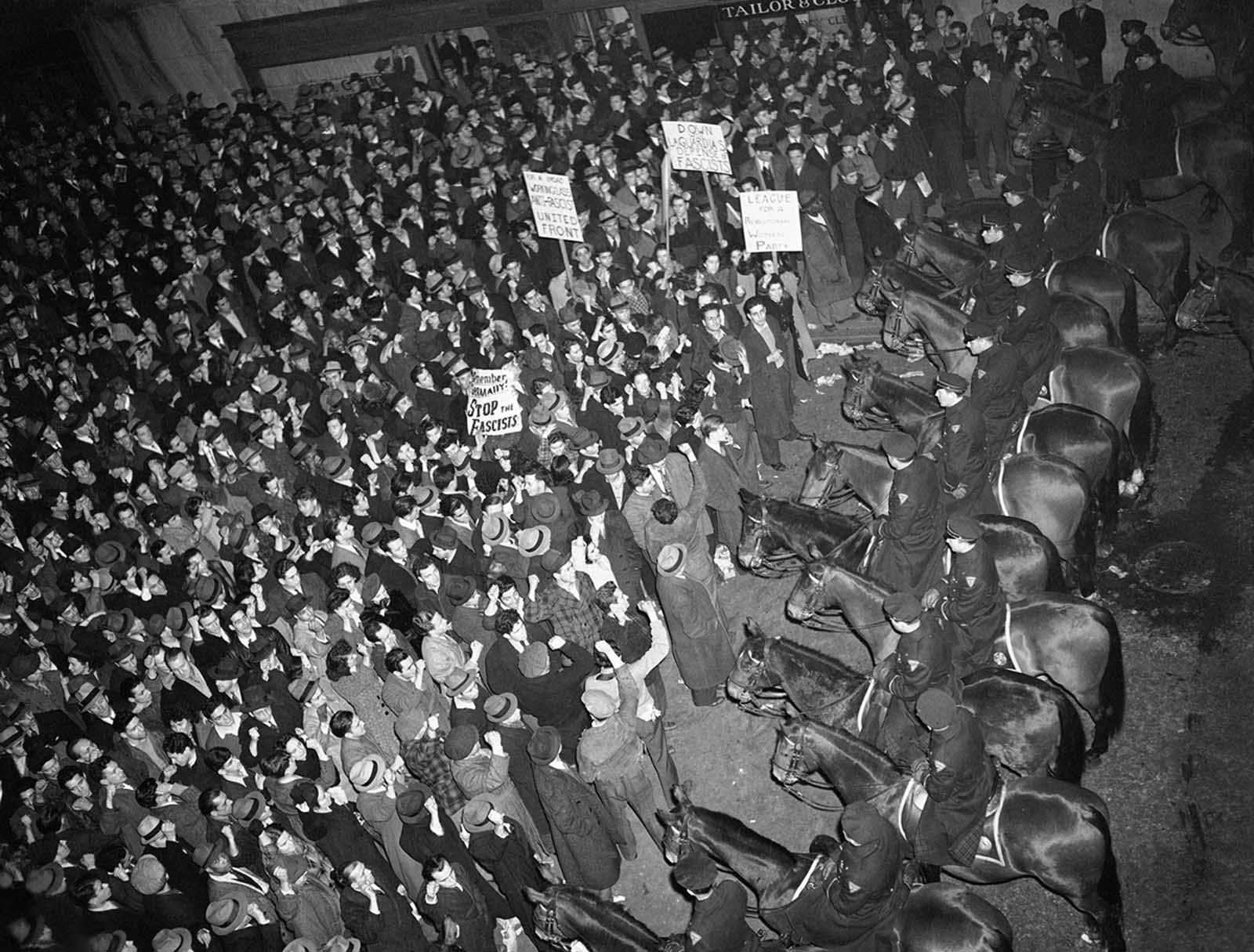 New York City’s mounted police form a solid line outside Madison Square Garden on February 20, 1939, to hold in check a crowd which packed the streets around the Garden where the German American Bund was holding a rally. To prevent any clash between bundsmen and counter-demonstrators, police surrounded the area with a force of 1,500. 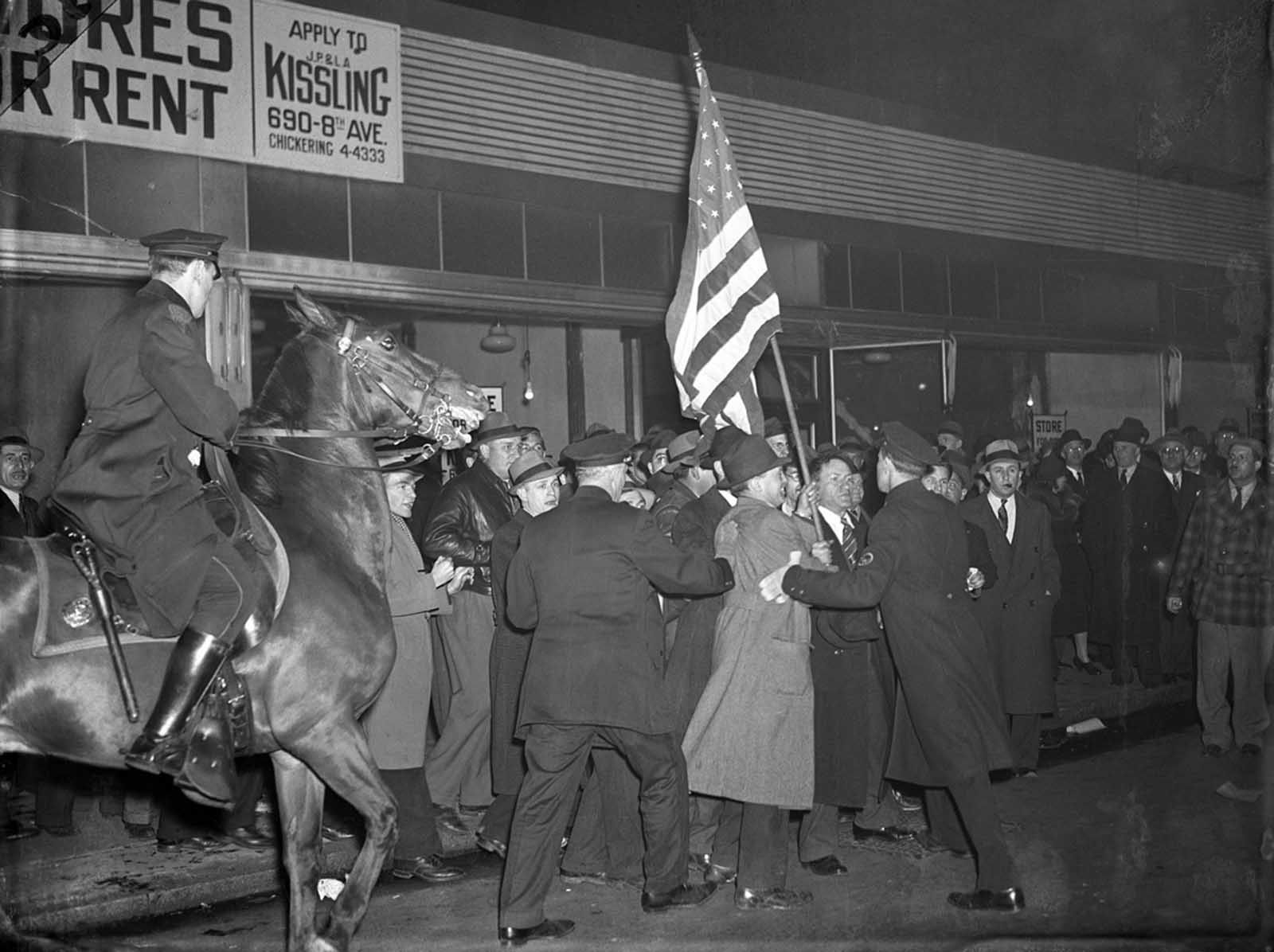 February 20, 1939. Original Caption: Fight For The Flag… Anti Nazis Battle Cops. Mounted Policemen and rabid Anti Nazis battle for an American flag outside Madison Square Garden. The Anti-Nazis were parading outside the Garden in protest of the German American Bund “Americanization” rally being held there. This was only one of the night’s many clashes between the demonstrators and heavy force of policemen who were on hand to preserve order. 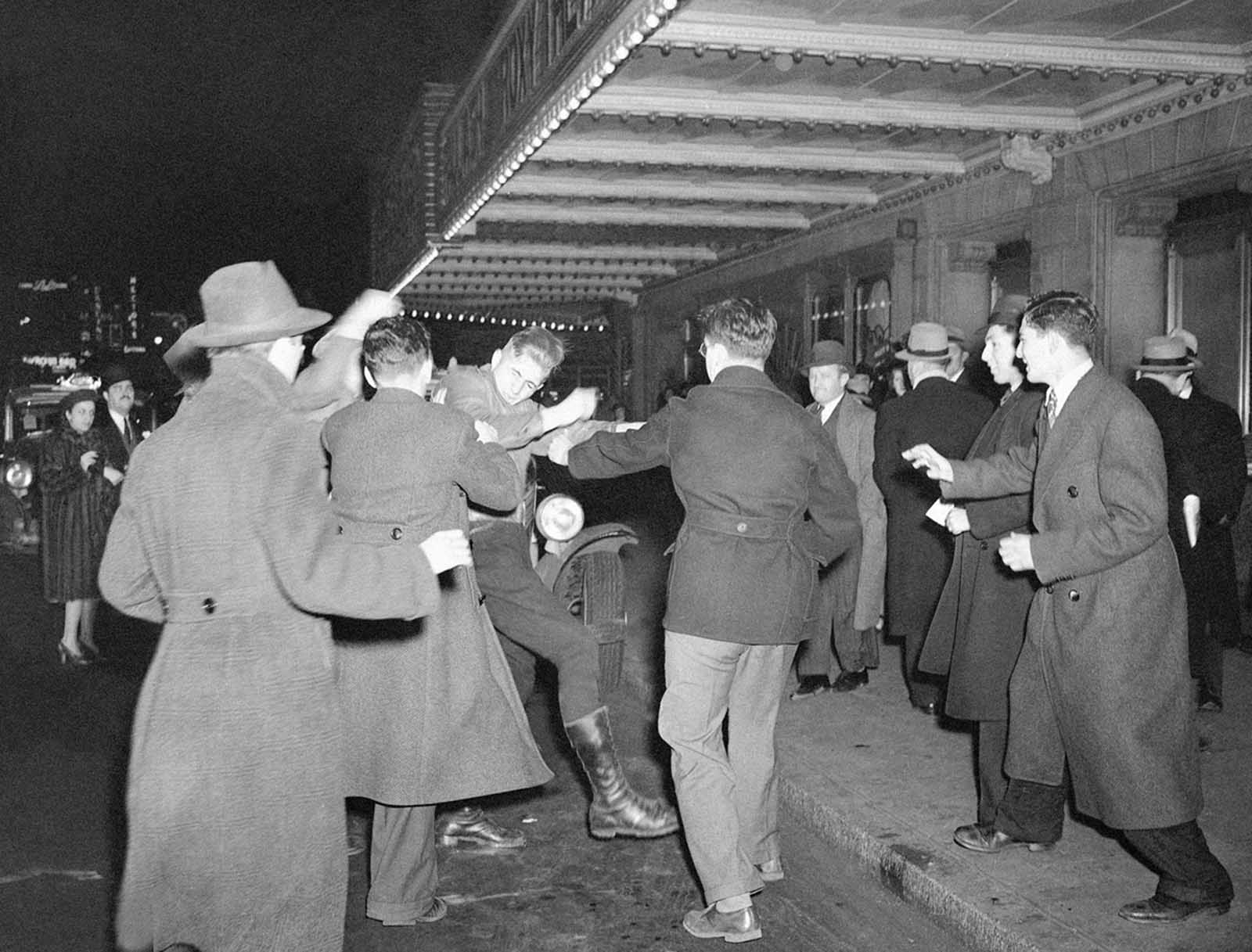 A crowd of demonstrators outside New York’s Madison Square Garden seize a uniformed member of the German American Bund who had emerged from a Bund rally in the Garden and attempted to enter a taxi, on February 20, 1939. 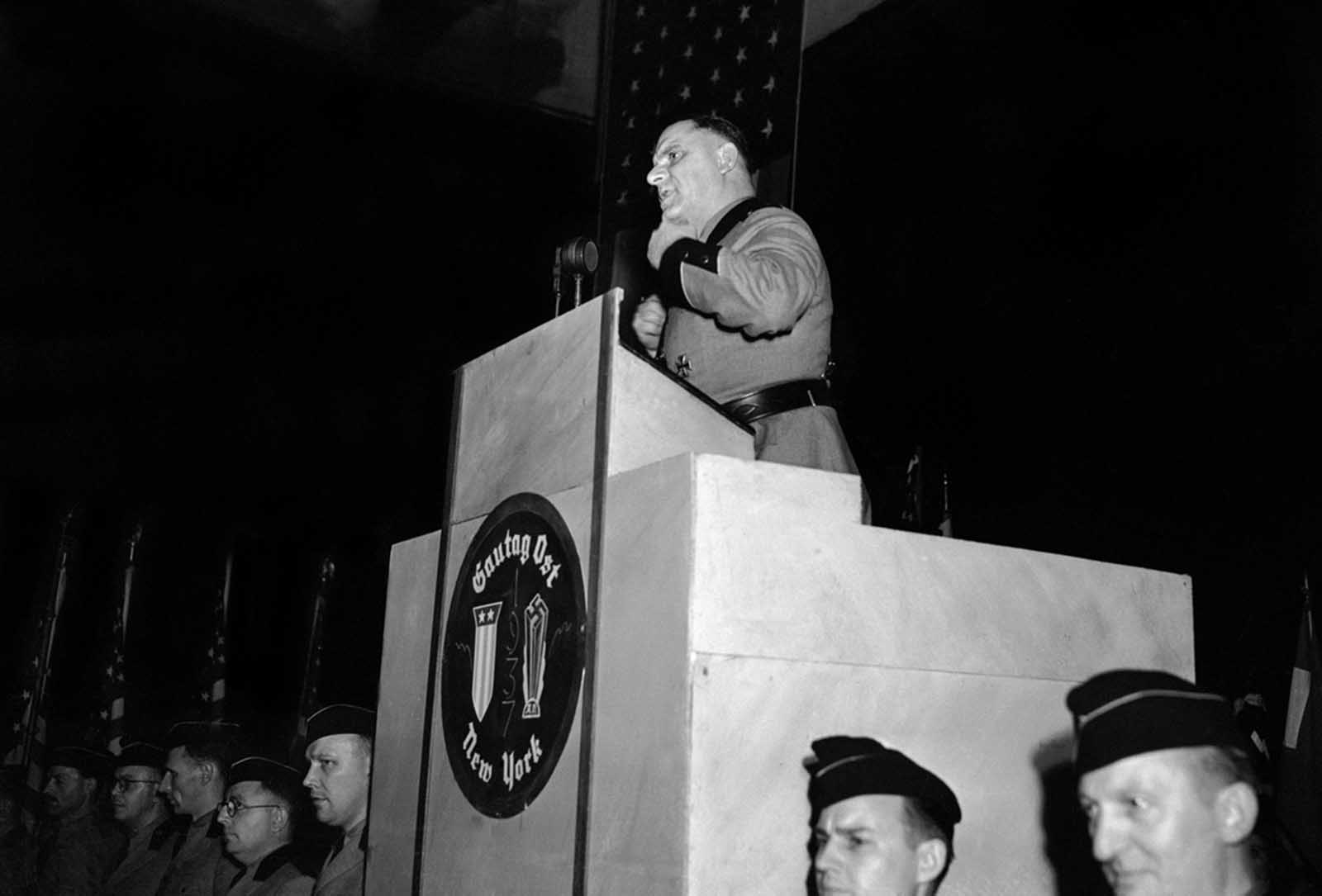 Original Caption: Fritz Kuhn, in the full uniform of a Storm Trooper, national leader of the Bund gestures from the rostrum at Madison Square Garden in New York, on February 20, 1939 while he uttered imprecations against Jews over and over. 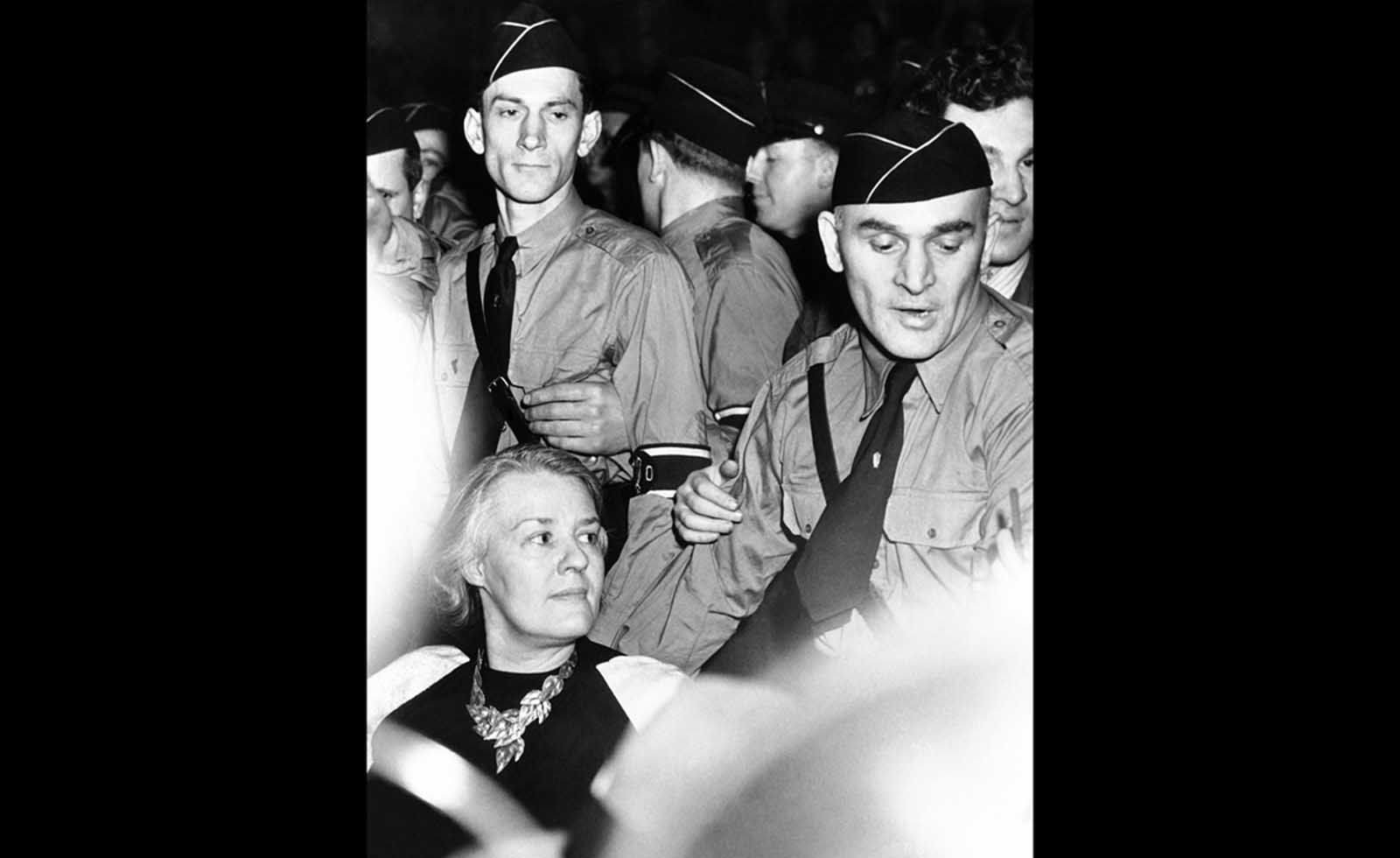 Original caption: Dorothy Thompson, the New York columnist and wife of Sinclair Lewis, the famous American author, interjected the word “Bunk!” at the big rally of the German-American Bund at Madison Square Garden, in New York, on February 20, 1939, and was promptly escorted outside in the hope that such action would prevent any further demonstration. Later, on her plea that is was her constitutional right to heckle, Miss Thompson was readmitted to the meeting. Here, with a pair of storm-troopers beside her, Dorothy Thompson is escorted from the meeting of the German-American Bund at Madison Square Garden. 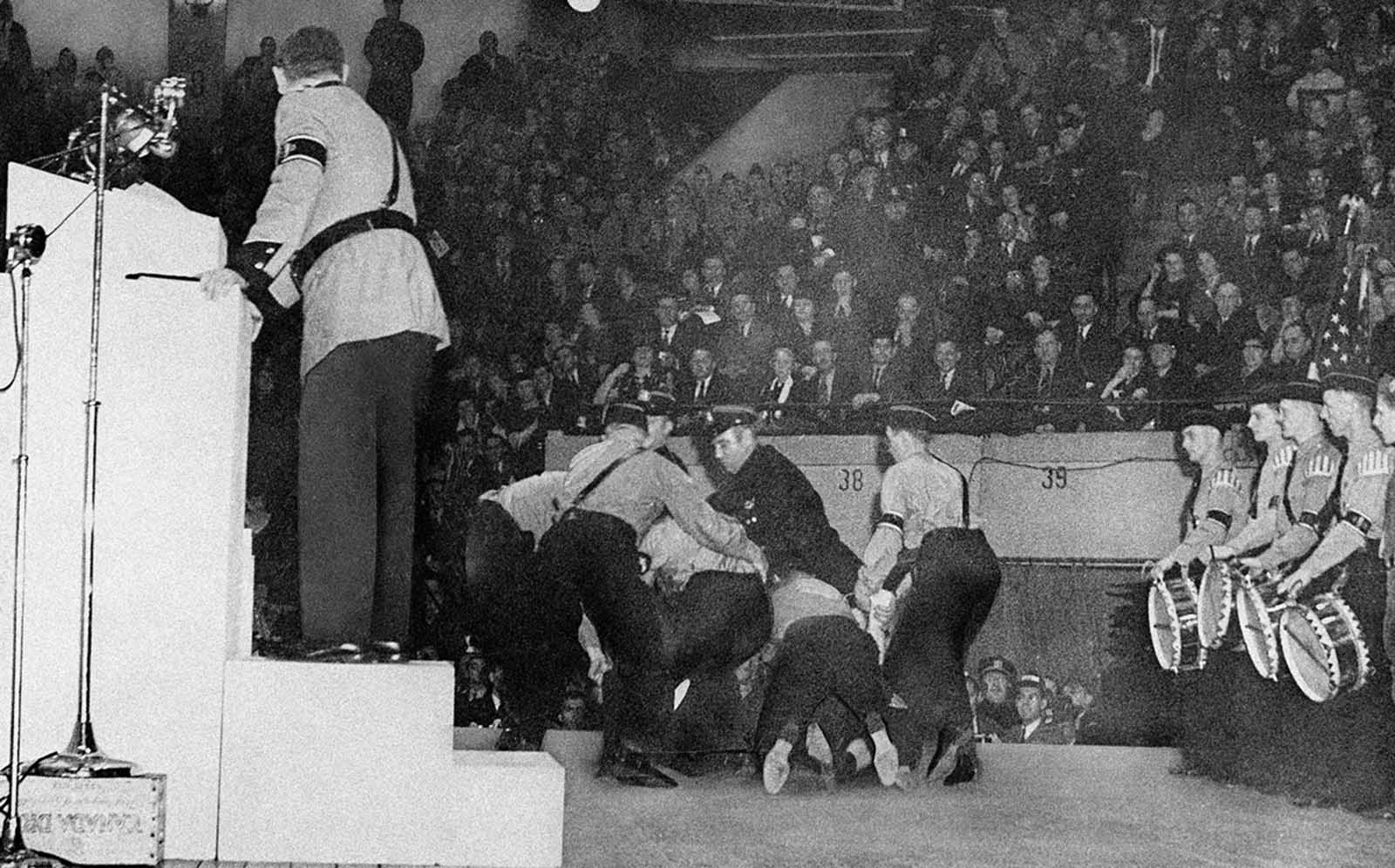 Stormtroopers subdue a heckler on the platform at New York’s Madison Square Garden, February 20, 1939. Police who rescued and later arrested the man, whose clothing was torn from him in the struggle, identified him as Isadore Greenbaum, 26, a hotel worker. Fritz Kuhn, National Bund leader, stands on the rostrum, his back turned as he regards the struggle which interrupted his Denunciation of Jews during the Bund rally. 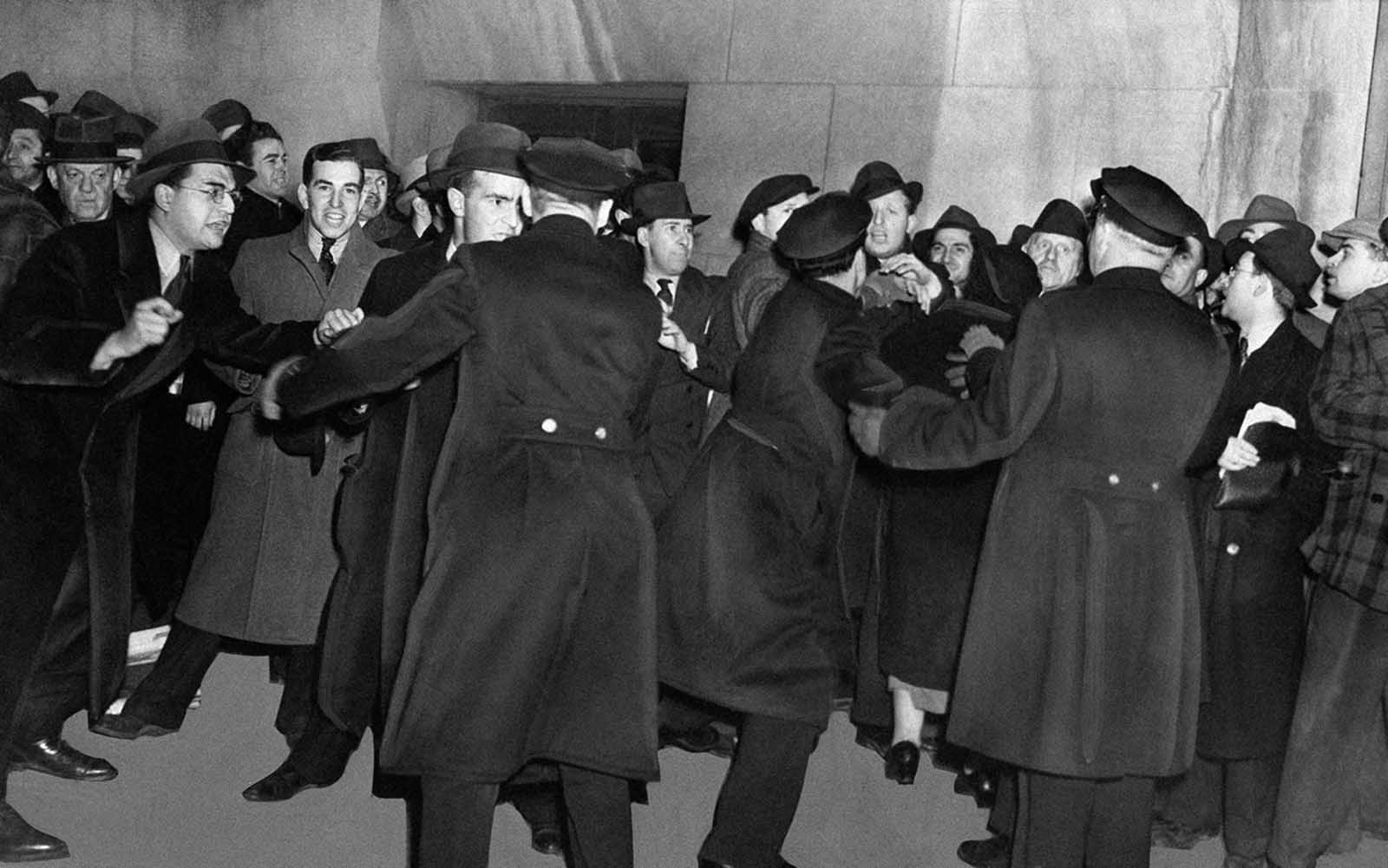 Original Caption: There’s plenty of pushing and shoving as police try to keep streets clear in the immediate vicinity of Madison Square Garden in New York, on February 20, 1939 during a German-American Bund rally which had aroused a storm of protest from anti-Bund forces. There were strict police orders against picketing, and the 1,500 cops on duty in the area were instructed to halt all persons entering the neighborhood with provocative signs. 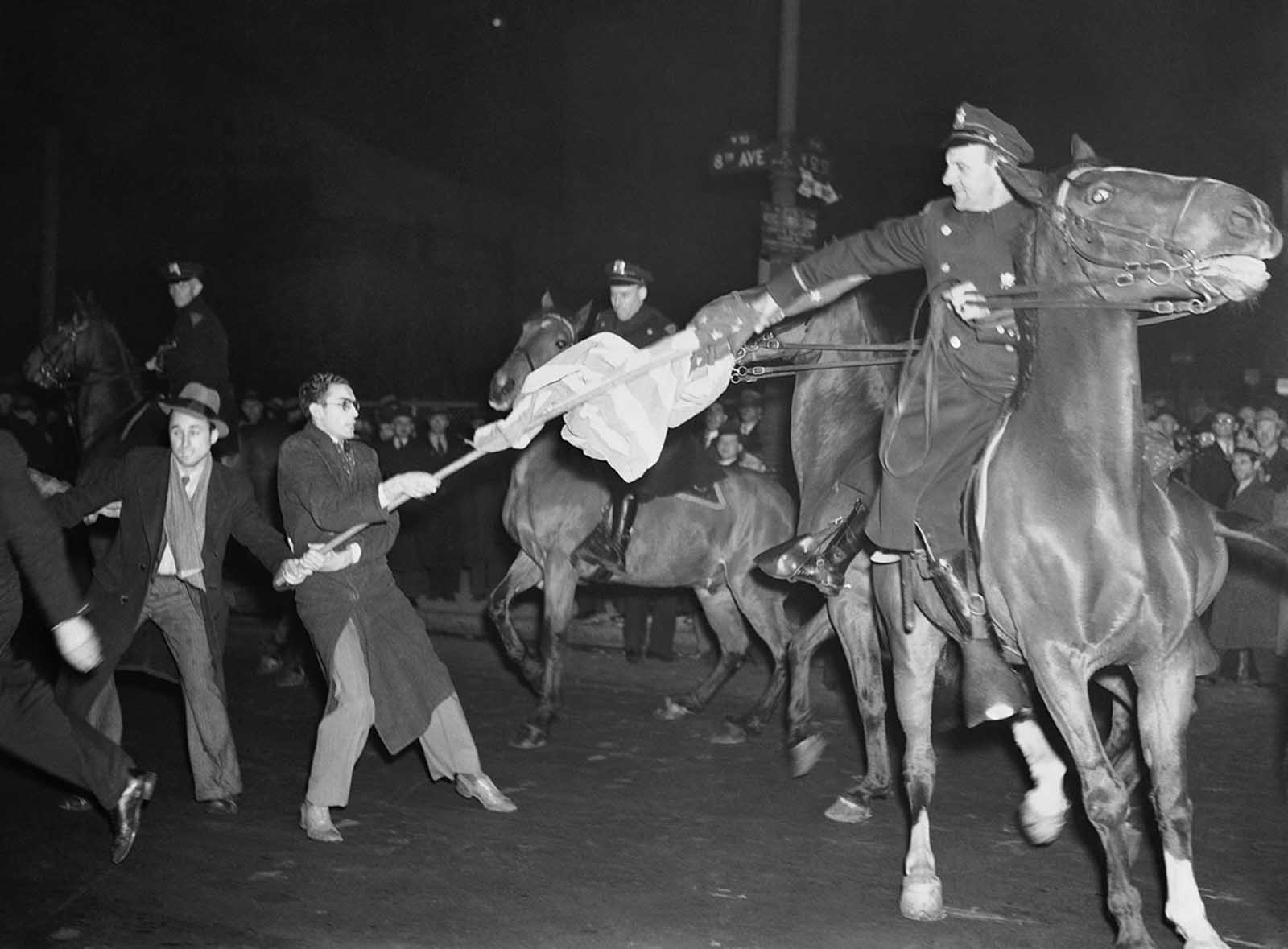 A New York City mounted policeman outside Madison Square Garden at 50th Street and 8th Avenue during a German American Bund meeting, is shown attempting to take an American flag away from one of the demonstrators who marched outside carrying the staff and banner on February 20, 1939. 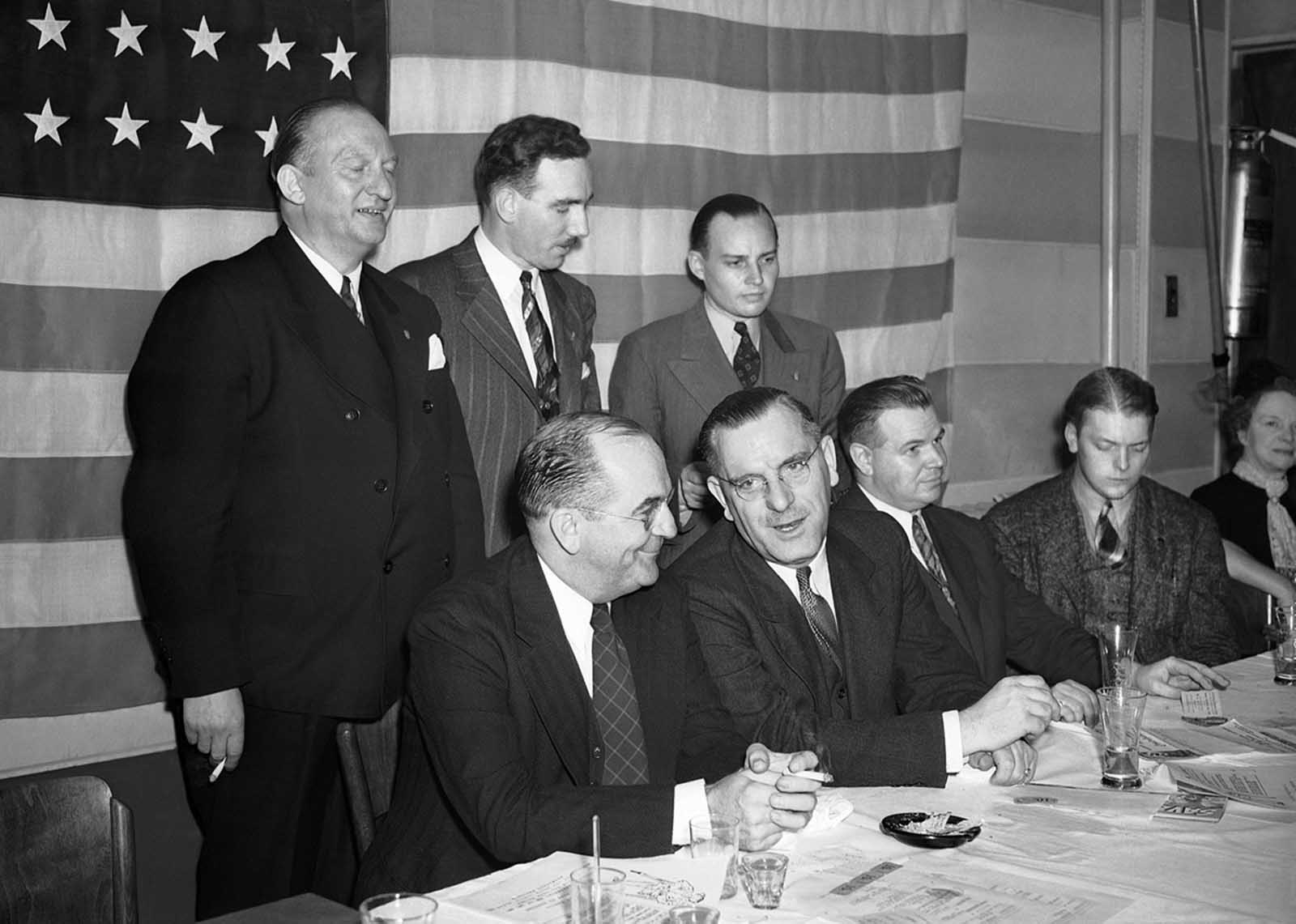 German American Bund speakers and officers in front of an American flag at a “patriotic dinner” in New York, on September 25, 1939 at which President Roosevelt’s neutrality recommendations were denounced. From left, seated Wilbur Keegan, New Jersey attorney who urged members to profess their loyalty to the United States; Fritz Kuhn, Bund fuehrer; and William Meyer, who said the Bund would continue to fight for a “real nationalistic America”. Standing: Gustave Elmer, William Kunze and James Wheeler-Hill, Bund officials. 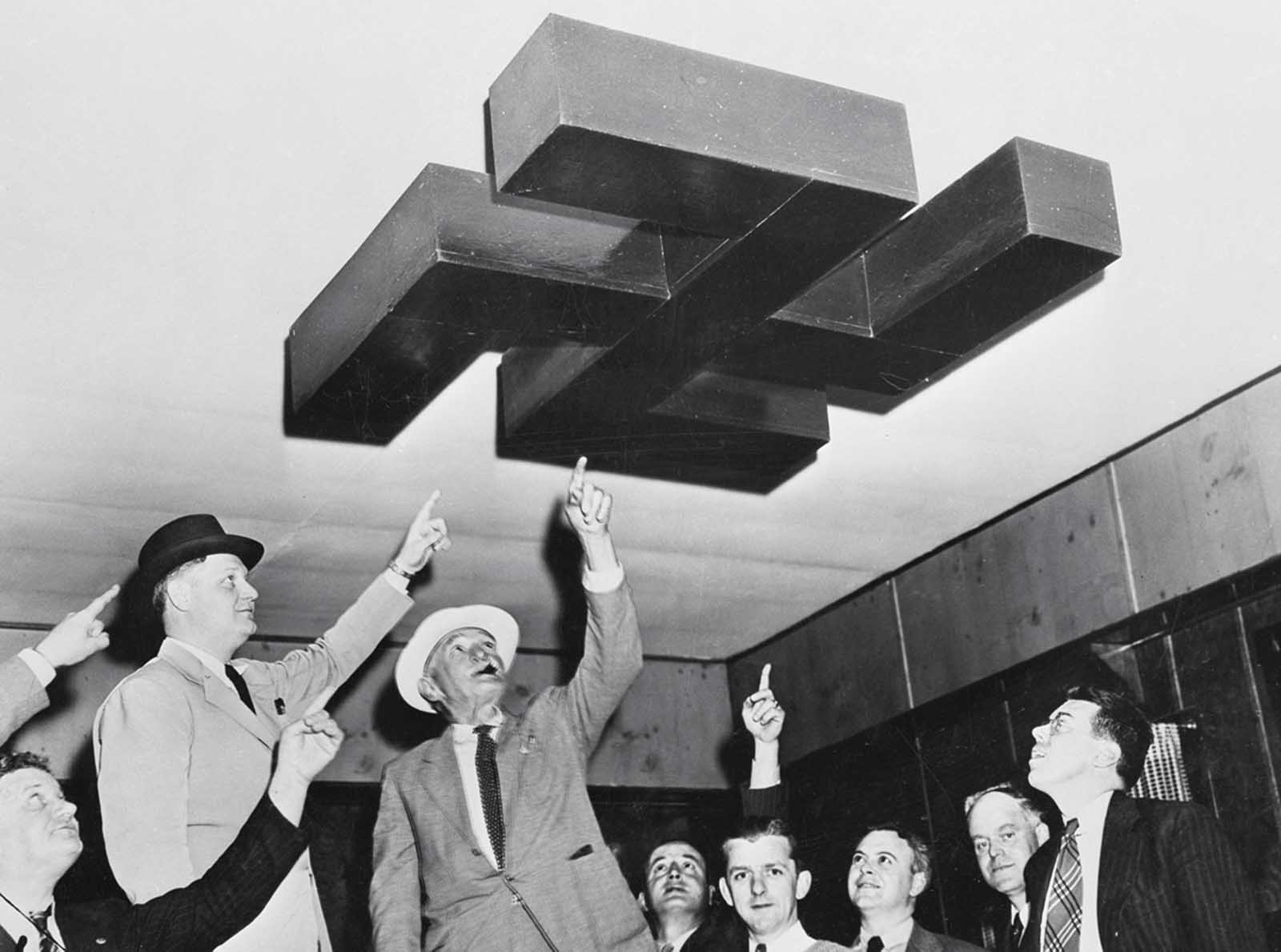 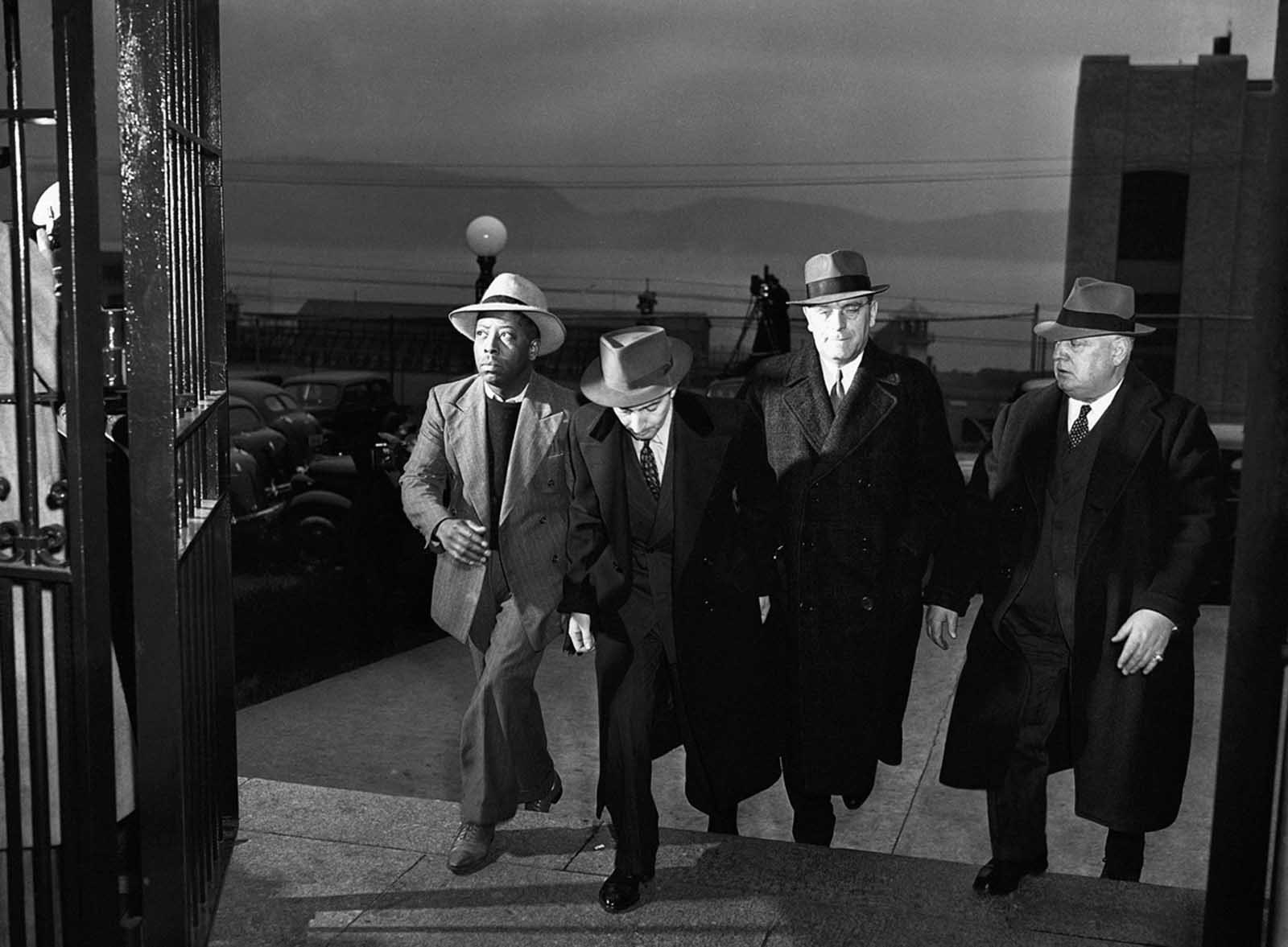 In 1939, German-American Bund leader Fritz Kuhn was convicted of embezzlement, and sent to prison. While there, his citizenship was revoked, and he was later interned in a federal camp in Texas as an enemy alien. He was later deported to Germany in 1945. Here, handcuffed to two other prisoners, Kuhn (third from left), walks into Sing Sing Prison in Ossining, New York, on December 6, 1939, to begin serving his sentence. Sheriff Mathew Larkin, right, of New York county, is escorting the prisoners.