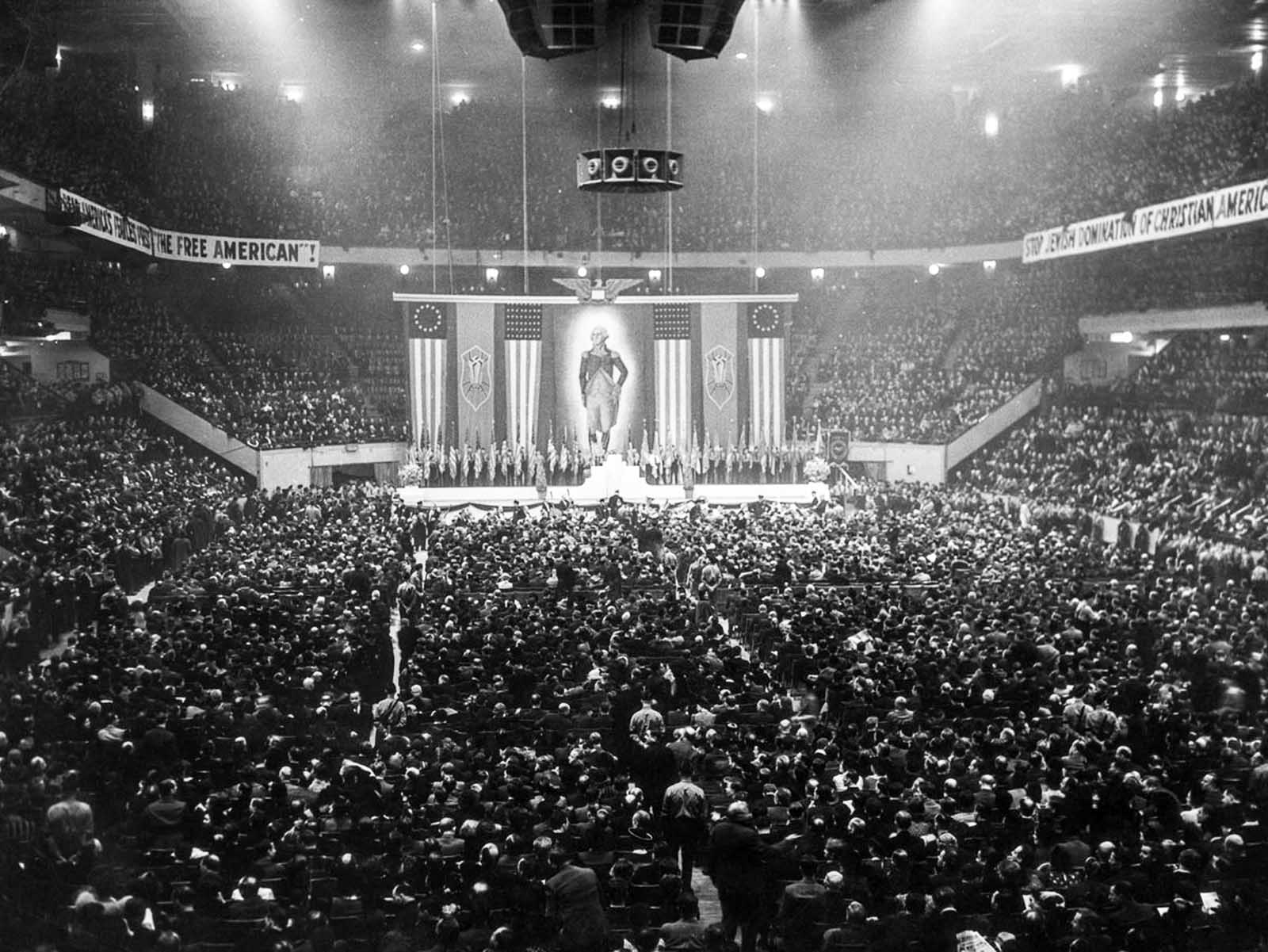 More than twenty thousand attend a meeting of the German American Bund, which included banners such as “Stop Jewish Domination of Christian Americans”. February 20, 1939.

Aside from its admiration for Adolf Hitler and the achievements of Nazi Germany, the German American Bund program included antisemitism, strong anti-Communist sentiments, and the demand that the United States remain neutral in the approaching European conflict.

Shortly thereafter, with help from the German consul in New York City, Spanknöbel created the Friends of New Germany by merging two older organizations in the United States, Gau-USA and the Free Society of Teutonia, which were both small groups with only a few hundred members each. The FONG was based in New York but had a strong presence in Chicago.

Members wore a uniform, a white shirt, and black trousers for men with a black hat festooned with a red symbol. Women members wore a white blouse and a black skirt. 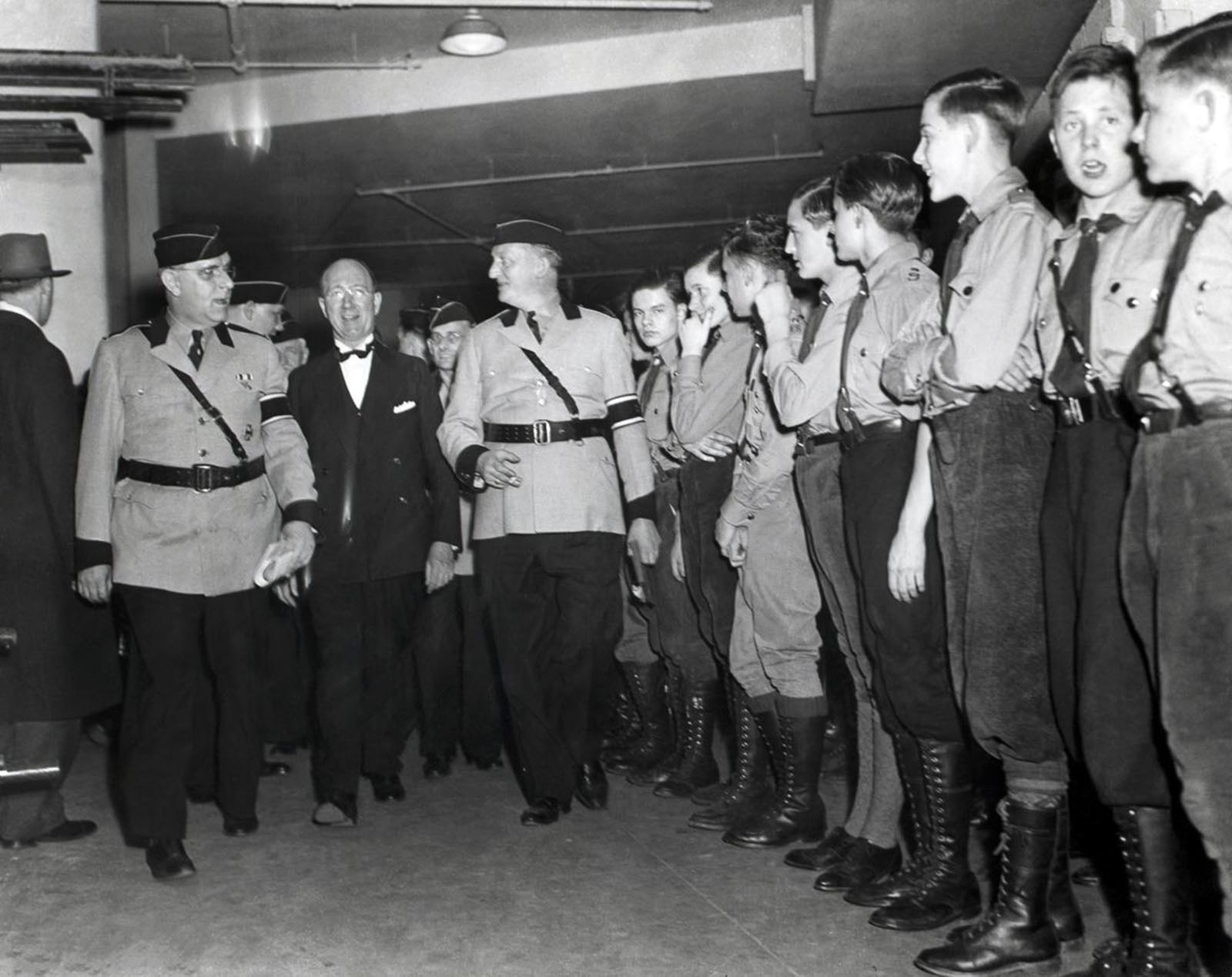 The leaders of the organization arrive to open the German American Bund rally.

The organization busied itself with verbal attacks against Jews, Communists, and the Versailles Treaty. Until 1935 the organization was openly supported by the Third Reich, although soon Nazi officials realized the organization was doing more harm than good in America and in December 1935 Hess ordered that all German citizens leave the Friends of New Germany; also, all the group’s leaders were recalled to Germany.

Not long after the Friends of New Germany fell out of favor with the Nazis and was dismantled, a new organization with similar goals arose in its place. The German American Bund or German American Federation was established in 1936 to succeed Friends of New Germany (FONG), the new name being chosen to emphasize the group’s American credentials after press criticism that the organization was unpatriotic. The Bund was to consist only of American citizens of German descent. Its main goal was to promote a favorable view of Nazi Germany.

The Bund elected a German-born American citizen Fritz Julius Kuhn as its leader (Bundesführer). Kuhn was a veteran of the Bavarian infantry during World War I and an Alter Kämpfer (old fighter) of the Nazi Party, who in 1934 was granted American citizenship. Kuhn was initially effective as a leader and was able to unite the organization and expand its membership.

In February 1939 Kuhn and the Bund held their largest rally in Madison Square Garden—ironically, one which marked the beginning of the end for the organization. In front of a crowd of 22,000, flanked by a massive portrait of George Washington, swastikas, and American flags, Kuhn attacked President Roosevelt for being part of a Bolshevik-Jewish conspiracy, calling him “Frank D. Rosenfeld” and calling his New Deal the “Jew Deal”.

Three thousand members of the Ordnungsdienst, the militant arm of the Bund, were on hand and fistfights broke out in the crowd among those who had come to heckle Kuhn. 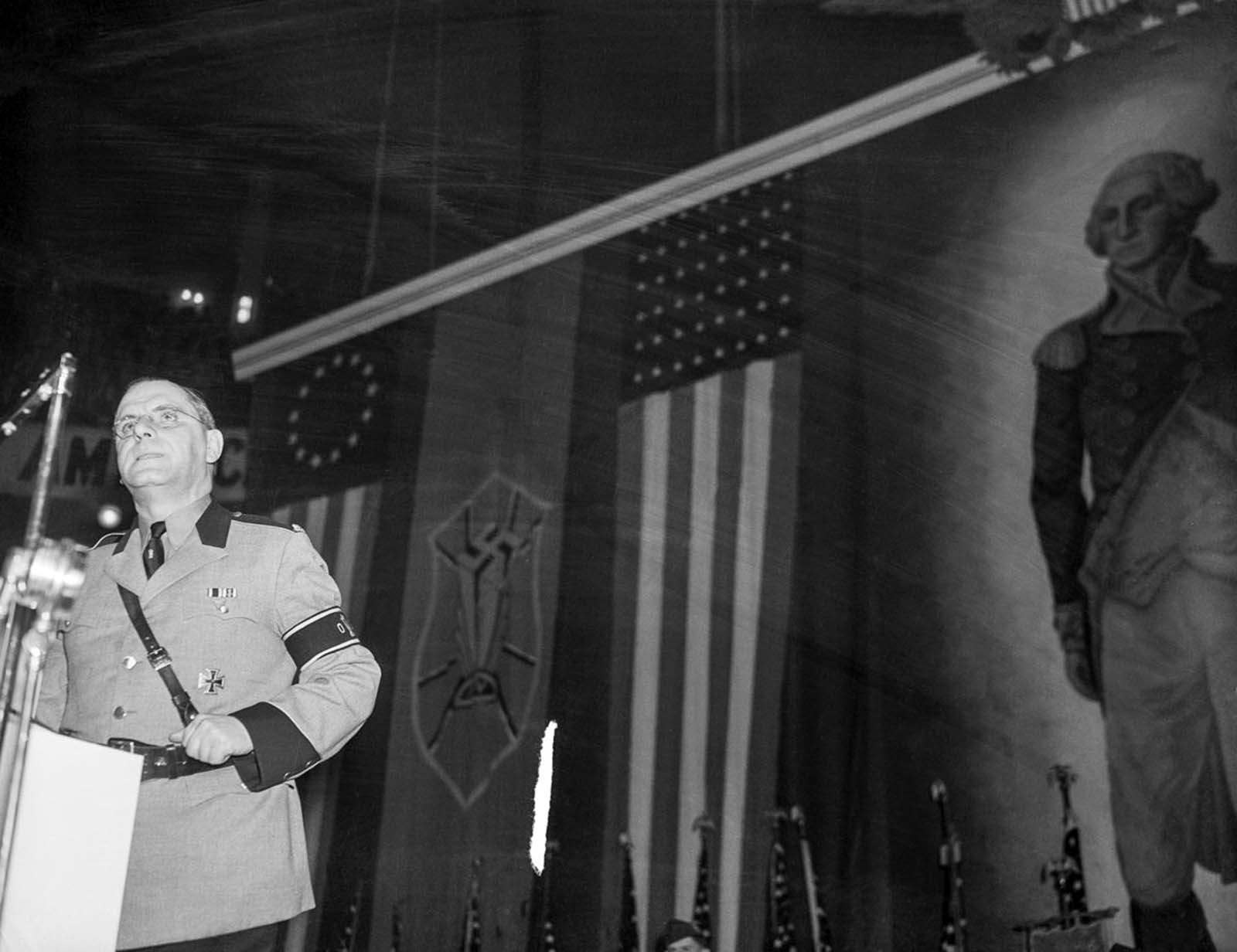 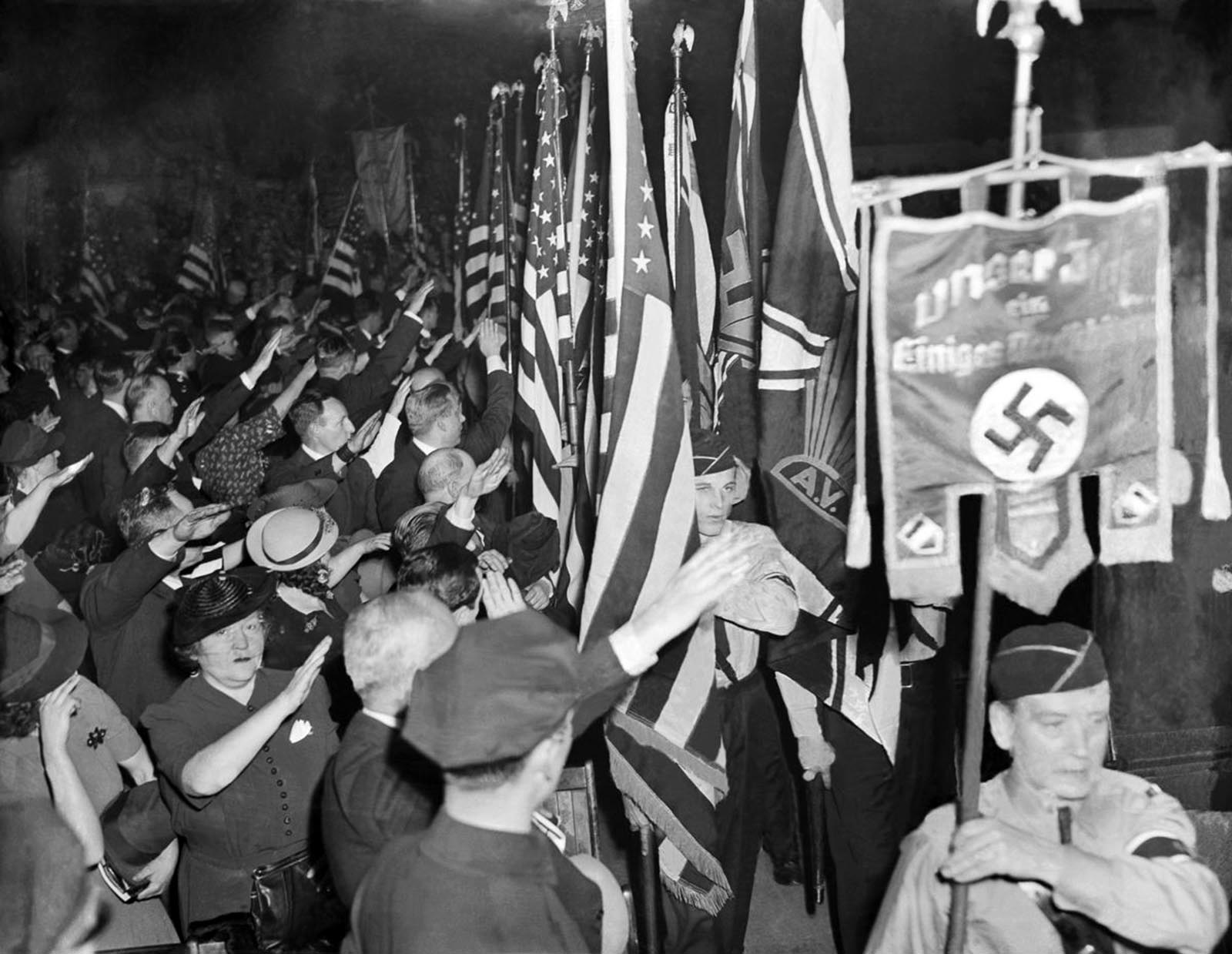 The Bund was to consist only of American citizens of German descent. 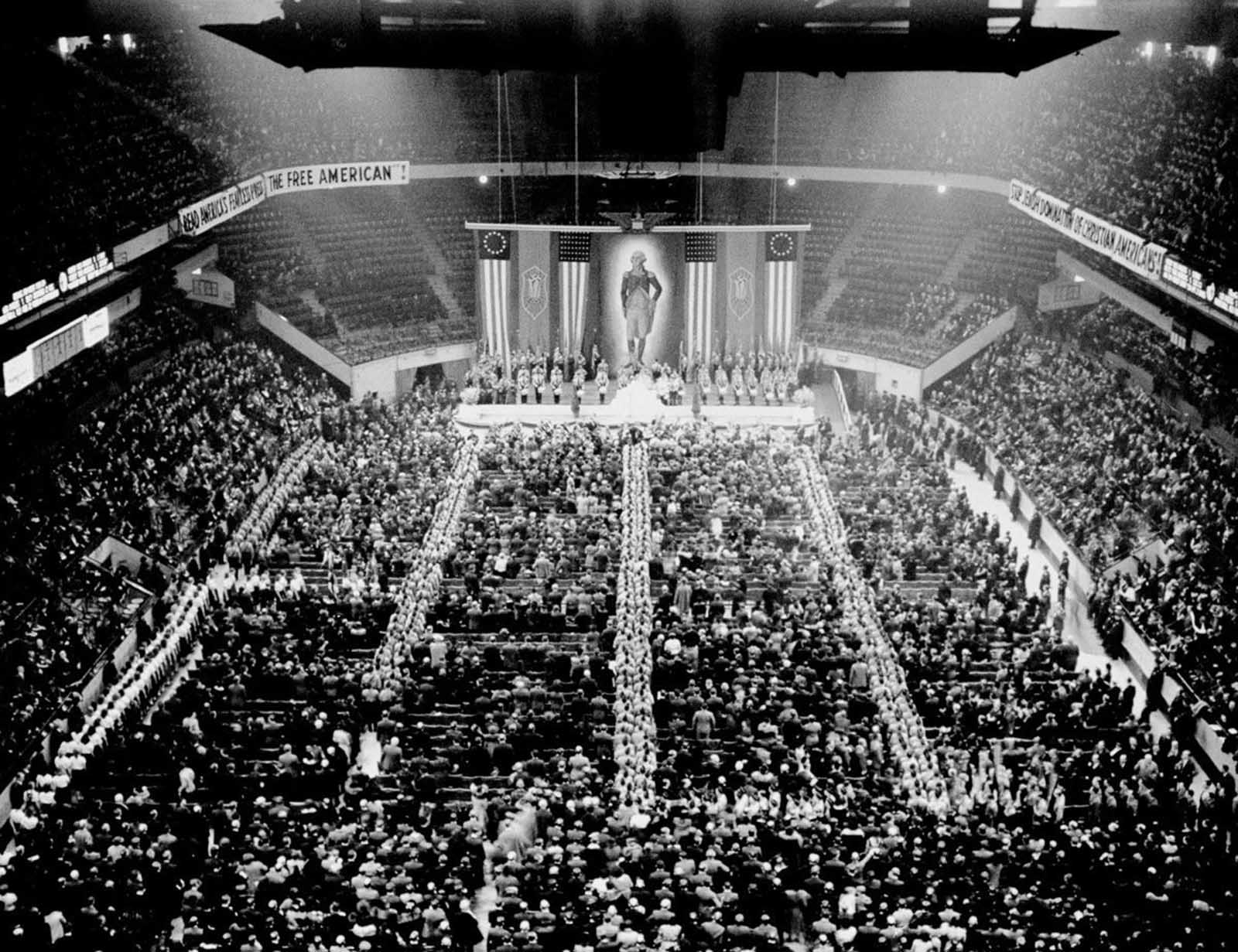 In front of a crowd of 22,000, flanked by a massive portrait of George Washington, swastikas, and American flags, Kuhn attacked President Roosevelt for being part of a Bolshevik-Jewish conspiracy. 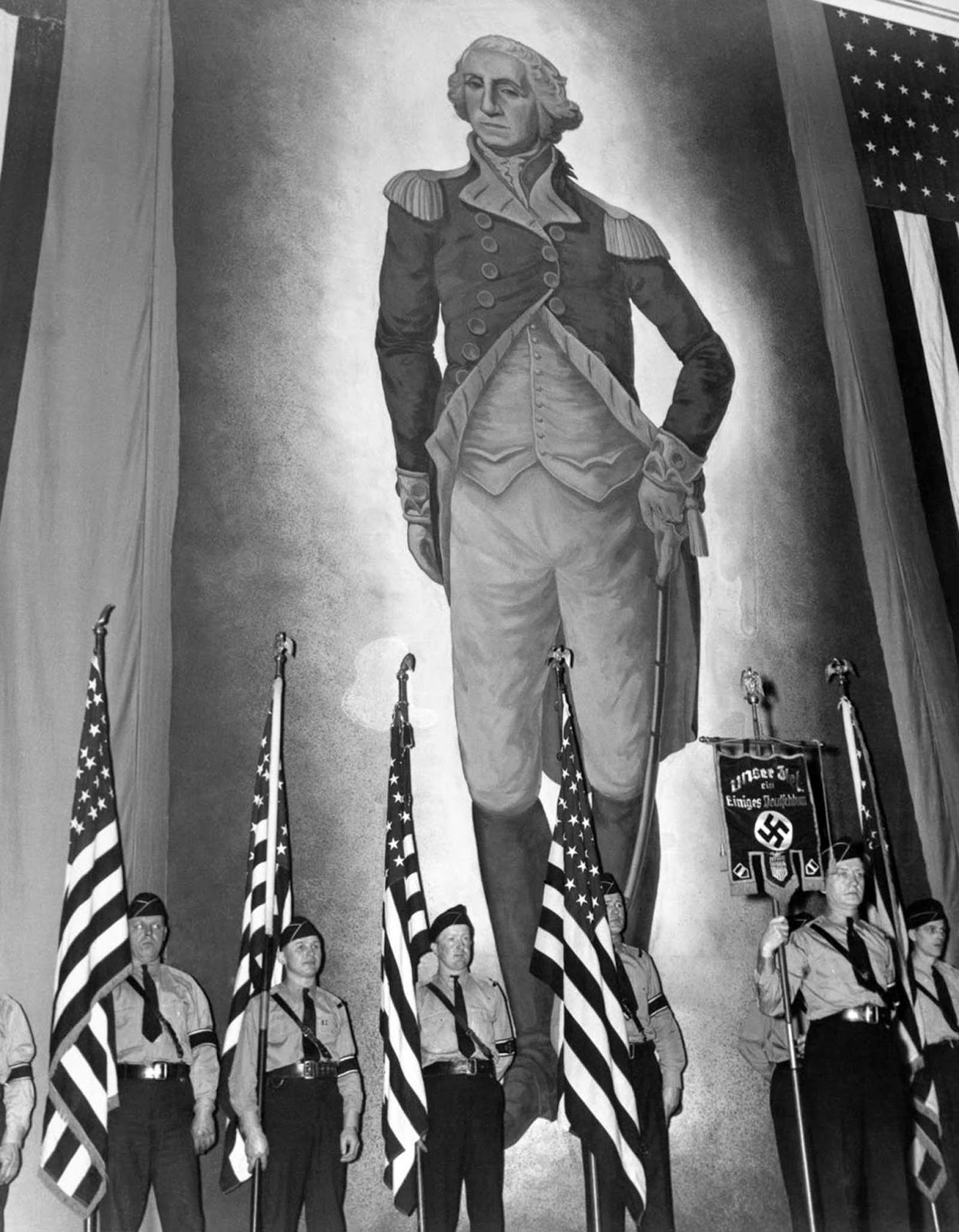 A Nazi guard stands before a massive portrait of George Washington.

After the rally, New York District Attorney Thomas Dewey arrested Kuhn on charges of larceny and forgery. New York tax investigation determined that Kuhn had embezzled $14,000 from the Bund.

The Bund did not seek to have Kuhn prosecuted, operating on the principle (Führerprinzip), that the leader had absolute power. However, New York City’s district attorney prosecuted him in an attempt to cripple the Bund.

On December 5, 1939, Kuhn was sentenced to two and a half to five years in prison for tax evasion and embezzlement. After the war, Kuhn was deported to Germany; he died there unceremoniously in 1951.

Following Kuhn’s arrest, the Bund slowly withered away, until its dissolution on 8 December 1941, after the attack on Pearl Harbor. After the United States declared war on Germany, federal officials began to arrest Bund officials.

Kuhn’s successor Gerhard Kunze was captured in Mexico and sentenced to 15 years of prison for “subversive activities”. Twenty-four other officers were convicted of conspiracy to violate the 1940 Selective Service Act and served prison time.

Some other Bund leaders committed suicide before the FBI caught up with them. Although some Bund members had their naturalization revoked and some spent time in prison camps, most members were left alone after the organization was disbanded.

There is a reason George Washington is up there and not Thomas Jefferson or James Madison Jr. Fascism was an ideology that emphasized action and heroism over intellectualism and philosophy. This is why Hitler’s ideal Aryan concept was a strong, handsome, and physically fit person rather than someone with a mind for civics.

Men of action were the ideal example figures. The other part of fascism was extreme patriotism, which is why each nation/group had its own fascist symbolism and mythology.

It wasn’t like communism where concepts were supposed to transcend ethnic boundaries, but an ideology where each nation had its own flavor. Washington, as a military leader, patriotic father, and someone whom a legend of heroism and virtue has grown up around was the ideal figure for fascist groups looking to pull a symbol out of American history.