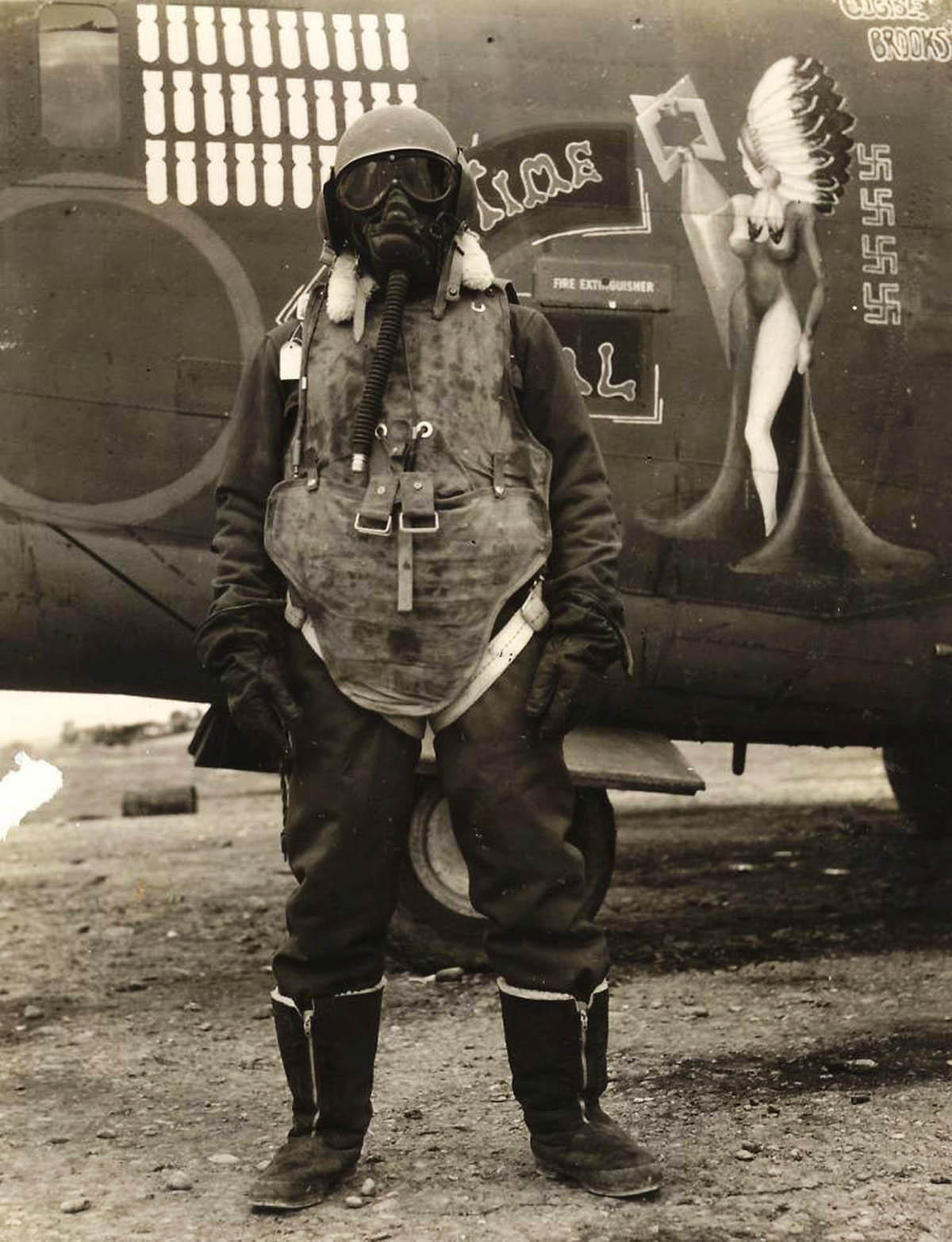 The airgunner in the picture is Major David G. Bellemere and behind him is the B-24 Liberator heavy bomber ‘Tepee Time Gal’. He’s wearing the typical flight clothing: M4 flak helmet with Polaroid B-8 goggles, flak jacket, F-2 electrical flying suit with B-3 jacket, A-14 oxygen mask, gloves, and ugg airmen boots.

Additionally, it is one of the things they were allowed to personalize. More importantly, the plane was what carried them away from death and back to the safety of their airfield.

The work you put into the maintenance and care for the plane is a culmination of the will you have to live on and survive. Aircraft would eventually be lost, outdated, or scrapped due to maintenance costs and replaced.

Aircrews in World War II decorated their planes with pictures of pinups and pretty girls. This kind of art was called “nose art“. It was (and still is) an interesting practice. While begun for practical reasons of identifying friendly units, the practice evolved to express the individuality often constrained by the uniformity of the military, to evoke memories of home and peacetime life, and as a kind of psychological protection against the stresses of war and the probability of death.

Some see a deep, psychological impulse – attaching a talisman, a good-luck charm, to the aircraft as a way of warding off evil, death, and bullets. The beautiful Indian girl painted in the above photograph was named Wattacrok.

In 1942, during the first three months of America’s combat flights over Europe, the average bomber crew was expected to complete 8-12 missions before being shot down or disabled. With this in mind, the US Army Air Force decided that 25 missions would constitute a “completed tour of duty” because of the “physical and mental strain on the crew”.

The 25 missions was a number crews could believe in, and provided some hope of a light at the end of the tunnel, particularly necessary with the grim statistics bomber crews faced early-on before long-range fighter escorts significantly improved mission survivability when they arrived later on in the course of the conflict.

This 25 missions rule does seem kind of strange because an infantryman was in until he was killed, injured or somebody won. Surviving 25 missions was pretty rare, so to inherit such a plane was considered extremely lucky.

The new crew could always tell the new airplanes from the old ones because they were warmer. On the old ones, the seals around the turrets would eventually wear out and let the cold in.