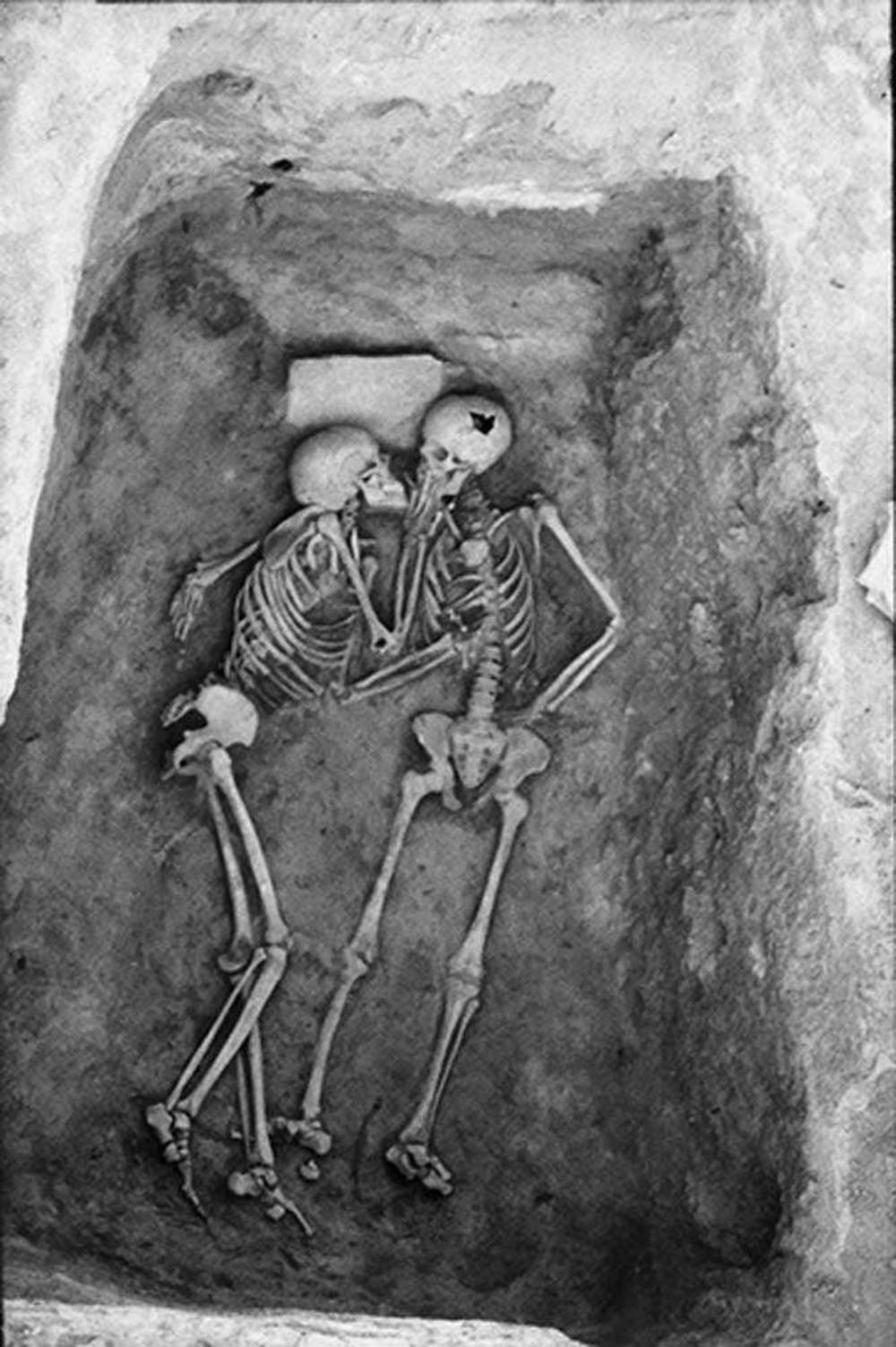 The 2800 years old kiss as if to signify that love is eternal.

These human remains were unearthed in 1973 at the Teppe Hasanlu archaeological site, located in the Solduz Valley in the West Azerbaijan Province of Iran. The site was burned after a military attack. The “head wound” is actually from modern-day excavators.

According to Penn Museum: Around 800 BCE, the settlement of Hasanlu in northwestern Iran was destroyed by an as yet unknown invading force. Inhabitants were slain and left where they fell, and much of the site was burned in a conflagration.

The skeletons of the “lovers” were found together in a mudbrick and plaster bin during excavations in 1973. They perished during the destruction of the site; both have some evidence of trauma from around the time of their death, but no definitively fatal wounds (many injuries such as those to soft tissue could leave the skeleton unmarked).

They are facing one another and appear to be in an embrace. The skeleton on the left is reaching out a hand to touch the face of the other individual, and their arms are around one another. The “lovers” were on display at the Penn Museum from the mid-1970s until the mid-1980s.

A group of slain individuals from Burned Building II from the same site.

The basic biological outlines of the two individuals based on skeletal analysis:

These skeletons represent one very young adult male and one slightly older probable male, both fairly healthy and in the prime of life.

The “lovers” are perplexing in a variety of ways. First of all, how did they come to be in the bin at all? Were they placed there, or did they attempt to hide from their attackers inside it?

Secondly, there were no artifacts found in the bin with these individuals except for a stone slab that is under their heads.

This is in contrast with other skeletons at the site, which are shown clearly with adornments still on their bodies. Why did they have nothing with them?

Had they been stripped of their possessions? Finally, what was the nature of the relationship between these two people? Was their tender pose a spontaneous gesture of comfort in the face of dire circumstances?

As these two individuals and the other inhabitants of Hasanlu faced their darkest hour together, an embrace from a friend, lover, relative, or even a stranger might have been a natural outcome of extreme duress.

The original source of this image is the Penn Museum and officially named “The Lovers”. Its description in the museum label reads:

“The Lovers” from 1972 season at Hasanlu.
Hasanlu is an archaeological excavation site in Iran, Western Azerbaijan, Solduz Valley. These skeletons were found in a bin with no objects. The only feature is a stone slab under the head of the skeleton on the left-hand side (SK335).

Most bodies found in Hasanlu were left where they were killed in the streets and in buildings.

Teppe Hasanlu, located in northwest Iran is a very famous archaeological site of an ancient city and was excavated in ten seasons between 1956 and 1974 by a team from the University Museum, University of Pennsylvania, and the Metropolitan Museum of New York. Many valuable artifacts were unearthed, including this eternal couple.